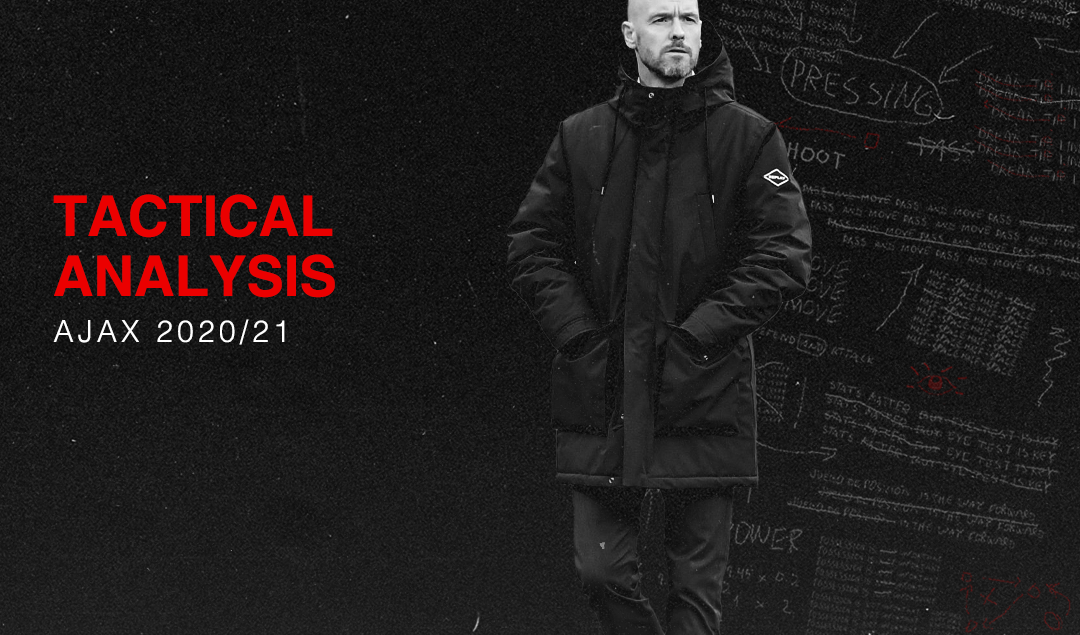 With a 2-0 win over AZ Alkmaar 2 weeks ago, Ajax secured the league, completing their domestic double. This team played in the traditional Ajax way – dominating possession and defending on the front foot. Alongside some beautiful leaked kits for next season, playing with the style they have shown further cemented Ajax as one of the most likeable teams in Europe. In this article, I will be showing the tactics which won Ajax the domestic double, outlining how Ajax are effective at regaining possession and detailing how they are so effective with the ball.

With the ball, Ajax try to create a lot of chances but the team’s security on the ball is also factored into tactical thinking. The security on the ball allows Ajax to both defend better and be able to create more chances. They can defend more effectively by having the ball because by having the ball the opponents can’t score. It allows for more chances to be created as it gives less time where Ajax don’t have the ball.

The idea of having security on the ball can be seen in their shape on the ball. Their shape has an overload of players in the first line which means that there is always a free option. This, therefore, means that it is very hard to press Ajax as the free option can be an out ball to escape the press. Due to this, a situation is often created where the opponents don’t press the first line of Ajax. 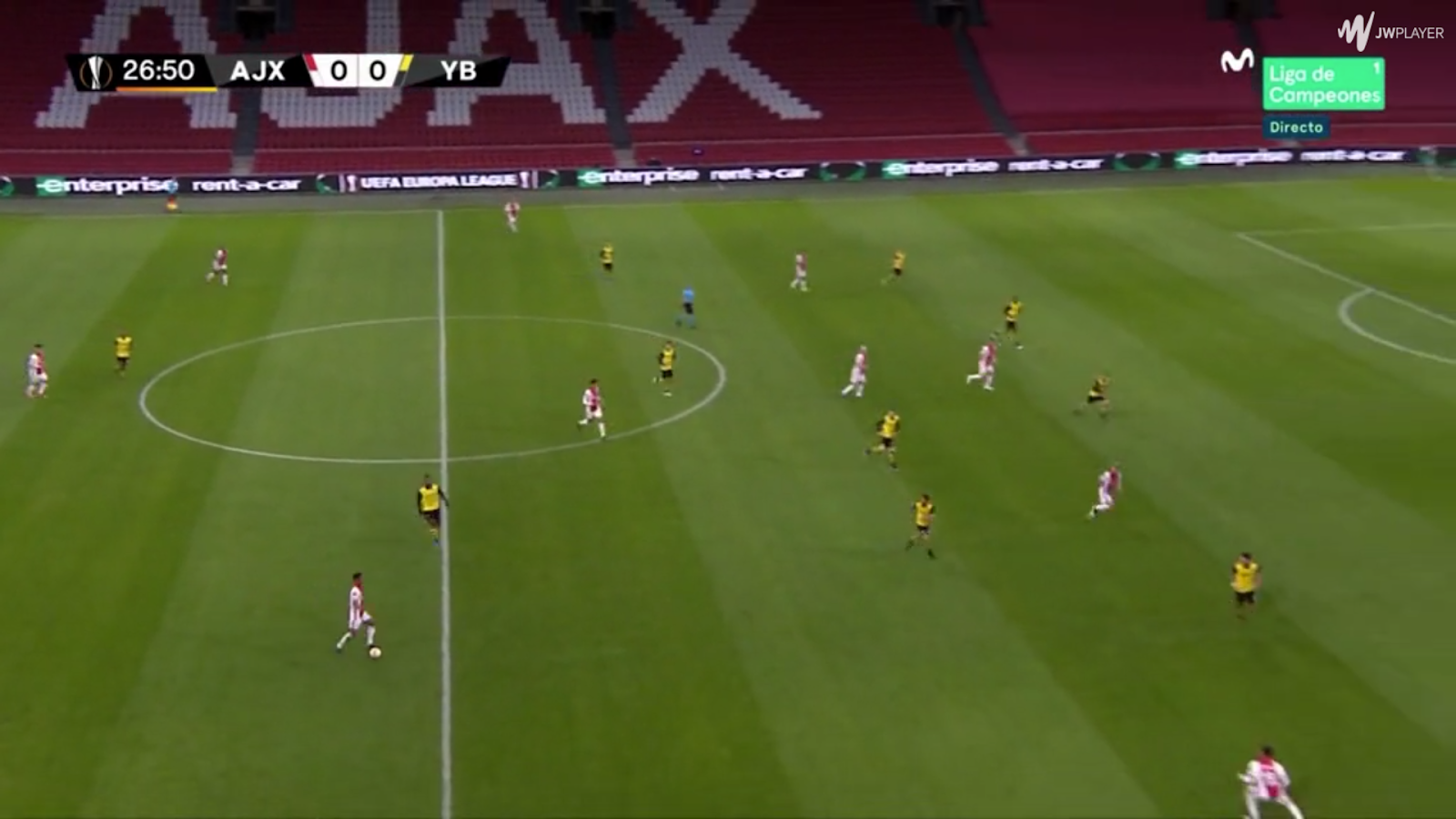 Their shape can be seen here – the line of 3 with the addition of a midfield player means that it is very hard to press Ajax as the free option is difficult to cover.

In the last third, Ajax use a similar idea to create chances. In the forward line, Ajax have 6 players at a given point. This is made up of the 2 fullbacks advancing and the front 4 (this can be seen in the image above). Having 6 attacking players means that there will be an overload against most formations (a back 6 is very rare). This means that there is subsequently a free option.

When this free option gets the ball, the opponents will have to move out of position to defend against this player which will make space. This space can then be exploited by the forwards making good options and being good in small spaces (more on why the forwards are so good in small spaces later). An example of the front 6 structure creating space can be seen below. 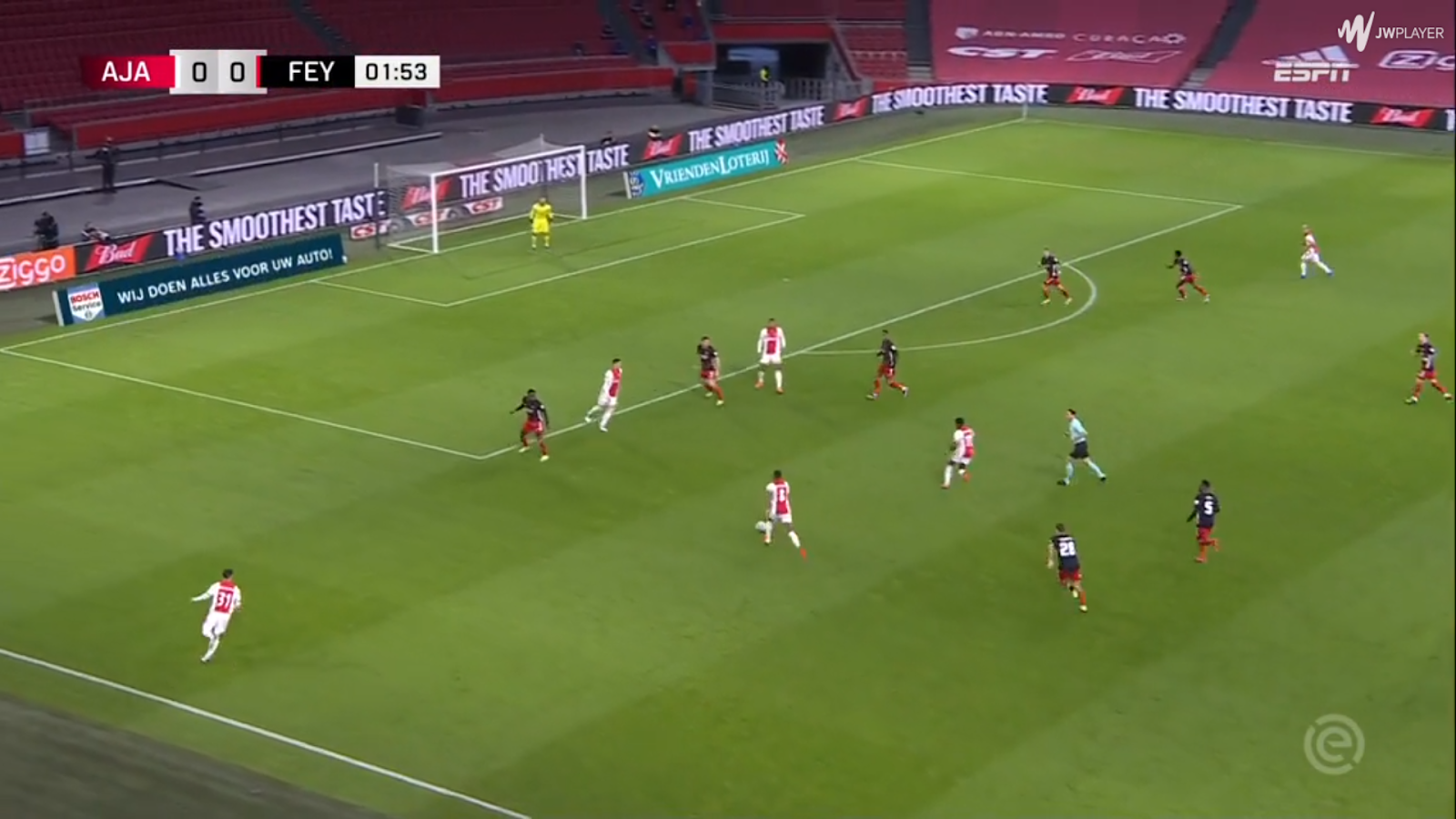 A massive space is made for Tagliafico in this situation as Tadić draws in the Feyenoord defender.

In this situation, if the Feyenoord defender was to close down Nicolás Tagliafico, then Dušan Tadić would be in space and would be able to receive the ball (assuming he makes a good option). These spaces being made bigger is a big reason why Ajax can make so many chances. 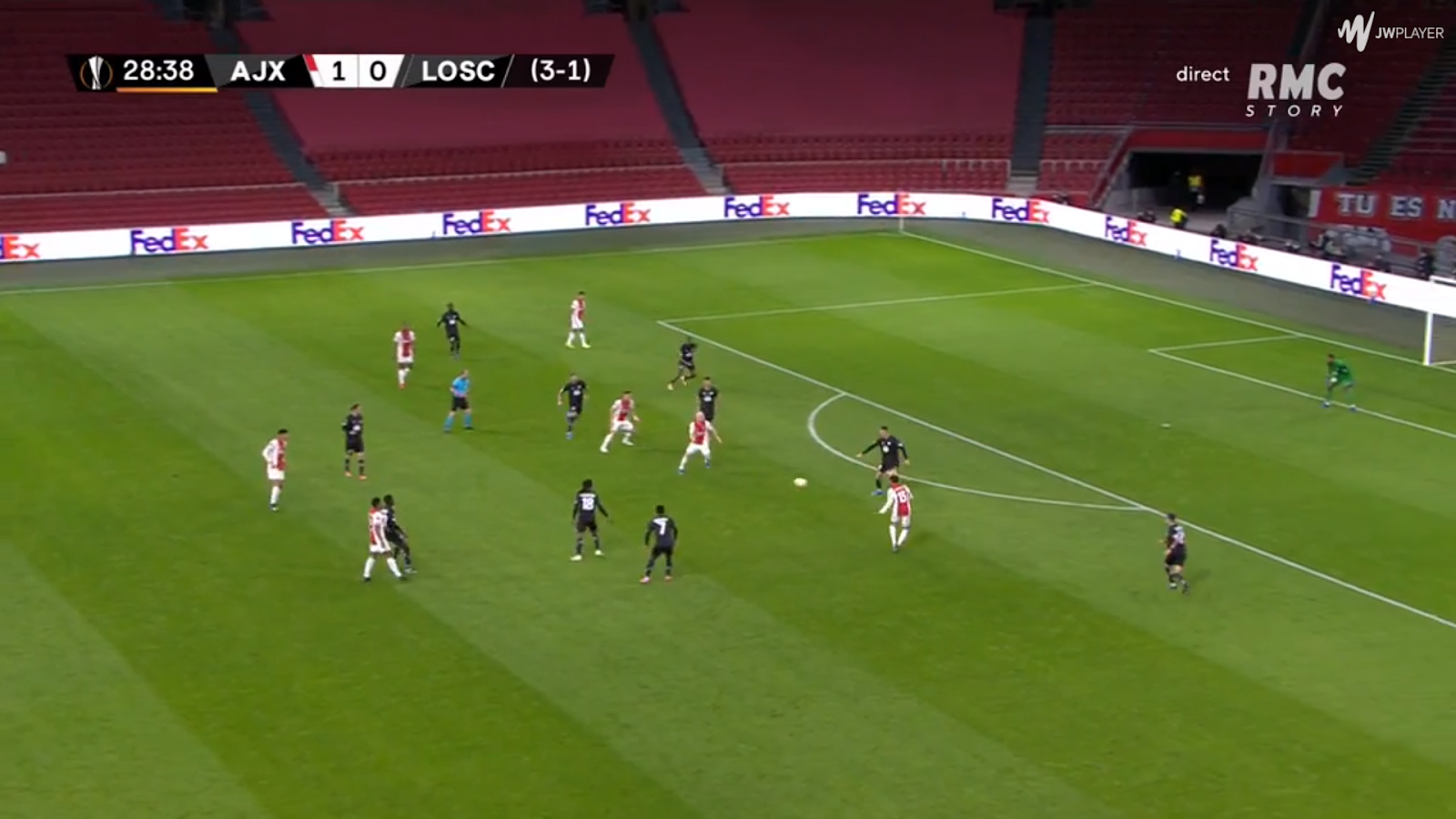 This is an example of these spaces; Davy Klaassen and Deyvne Rensch can make a 2vs1 (which leads to a massive chance after a 1-2). This is because Antony – out of frame – means that the Lille defender can’t get close to Rensch. Also, Tadić is forcing another defender to not be able to get close to Klaassen.

The spaces that are made by Ajax’s structure are exploited very well due to the player’s abilities in small spaces. The positioning of players allows them to get enough time to find another player who will move the ball past an opponent. Also, good awareness means that players can pick out another player with their first touch. This allows the players to spend less time on the ball, Further increasing the effectiveness of the Ajax players on the ball. 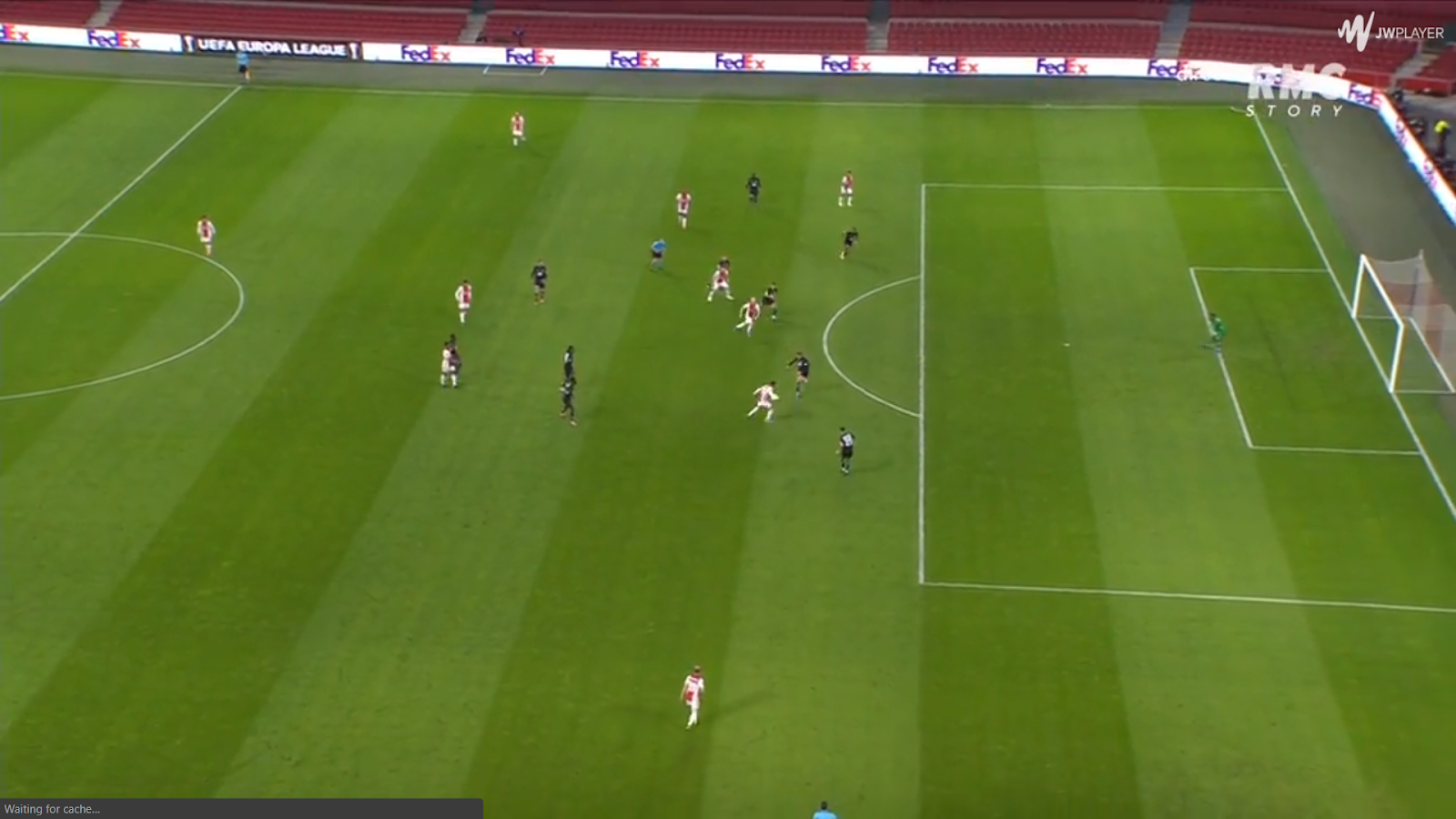 This is the same situation as the image above. Here, Klaassen gets in front of the Lille defender which allows him to be able to receive the ball. This combined with the awareness to pick out Rensch committing to his run makes a big chance.

When they play from a goal kick, Ajax use a 4-2-3-1 or a 4-2-4 formation so that they have extra options in the midfield line which therefore makes ball progression through the middle third easier. Doing this helps to counteract the potential for the opponents to counter-press and win the ball back close to Ajax’s goal.

Also, in league games, Ajax use more of a 3-3-3-1 on the ball more often than the 3-3-4. This facilitates a pure striker in the team e.g. Sébastien Haller or Lassina Traoré. However, the principles of close interplay and the 4 across the forward line are more often just the striker doesn’t get involved as much.

To summarise, Ajax have a very good structure that solves a lot of tactical problems which allows them to dominate possession and create chances often (keeping the riskier passes away from positions where the opponents could counter-attack). This is mainly done by having +1 situations in the first and last line and also due to the forward’s abilities in small spaces.

Ajax Out of Possession

Off the ball, Ajax have a philosophy to make build up as difficult as possible for the opponents. This means that Ajax force the opponents into situations where keeping the ball is very difficult. An example of these situations is forcing the opponents long where Ajax can win second balls.

When they lose the ball, Ajax’s shape facilitates counter-pressing. This is because they have players around the ball in areas where they are most likely to lose the ball (around the attackers due to the riskier passes they play). Also, they have players close by to the opponents’ nearest options which makes progressing the ball very difficult. This shape can be seen in this image: 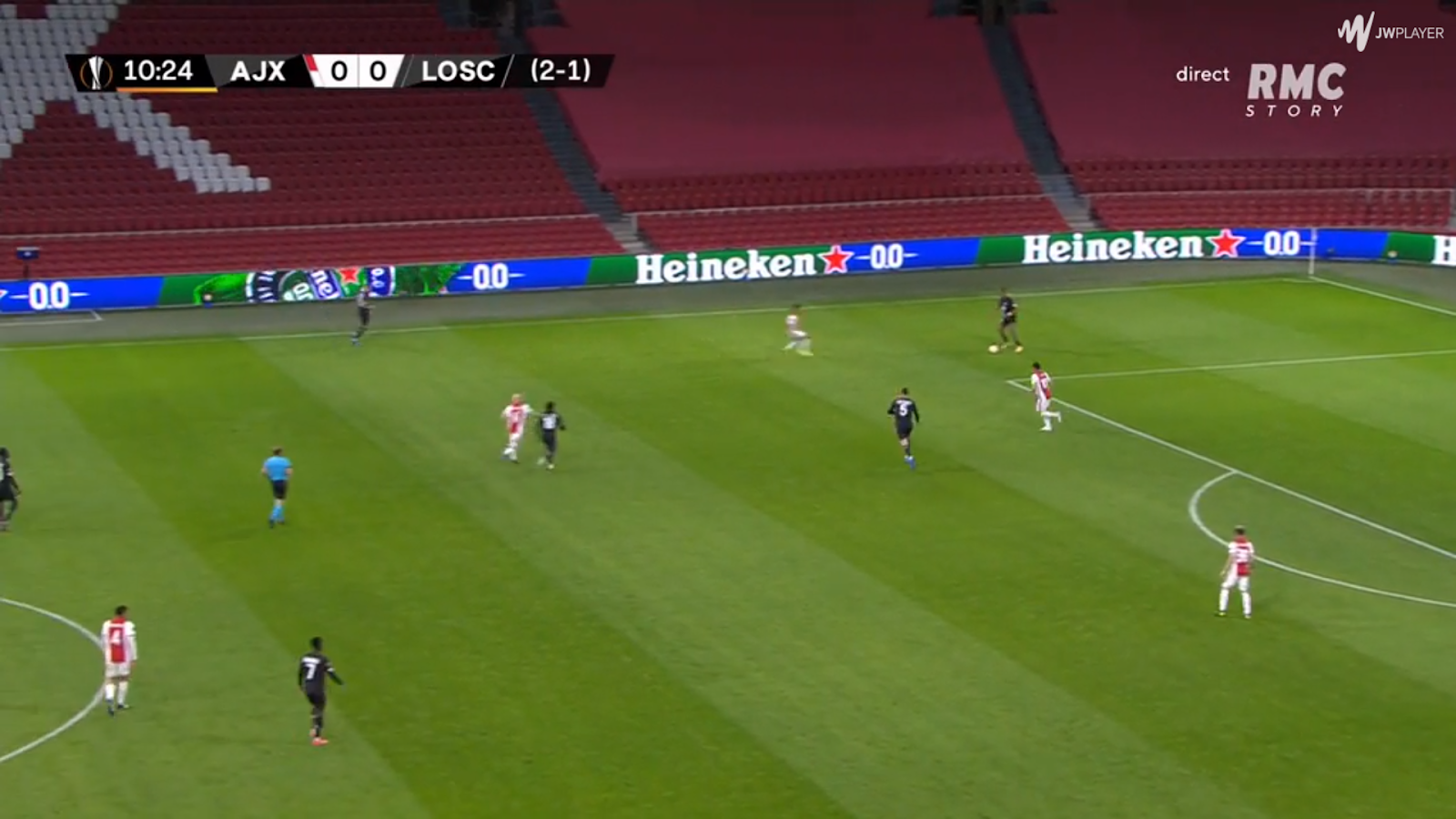 The forwards in this image try to give the Lille centre back as little room as possible whilst the midfield players mark the Lille options. This is to try to make is difficult for the opponents to build up.

This organisation, however, can often be played through as not all the players commit to the press – the defenders are especially cautious to commit to the press. This means that the opponents can often pass the press and have possession higher up the pitch. If this initial press is passed, Ajax drop into a shape where the midfield is man-marked. 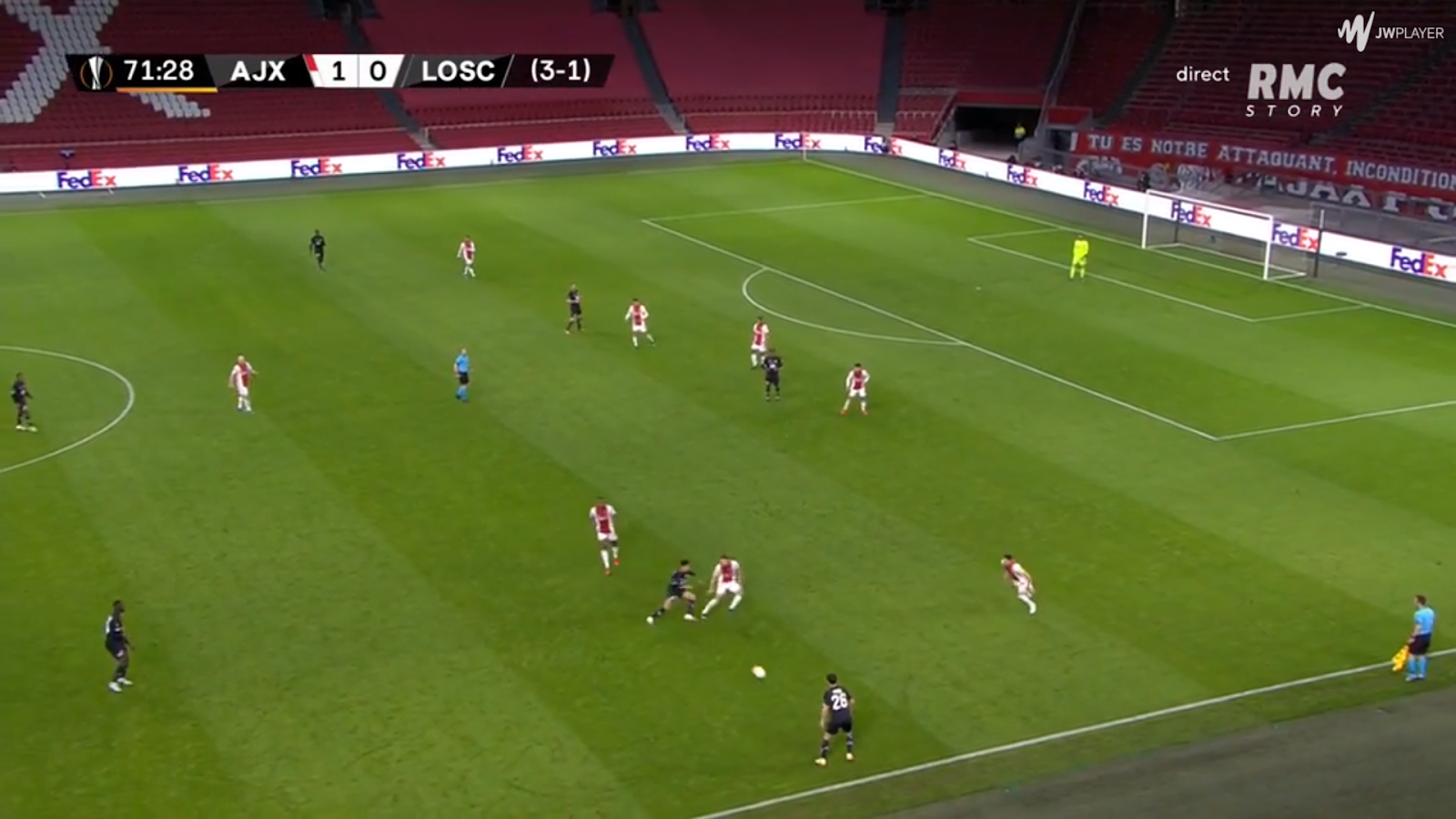 Here, Lille are in a good position inside Ajax’s defensive half.

To get Lille out of this good position, Ajax press the subsequent backwards pass from Lille’s Jérémy Pied. 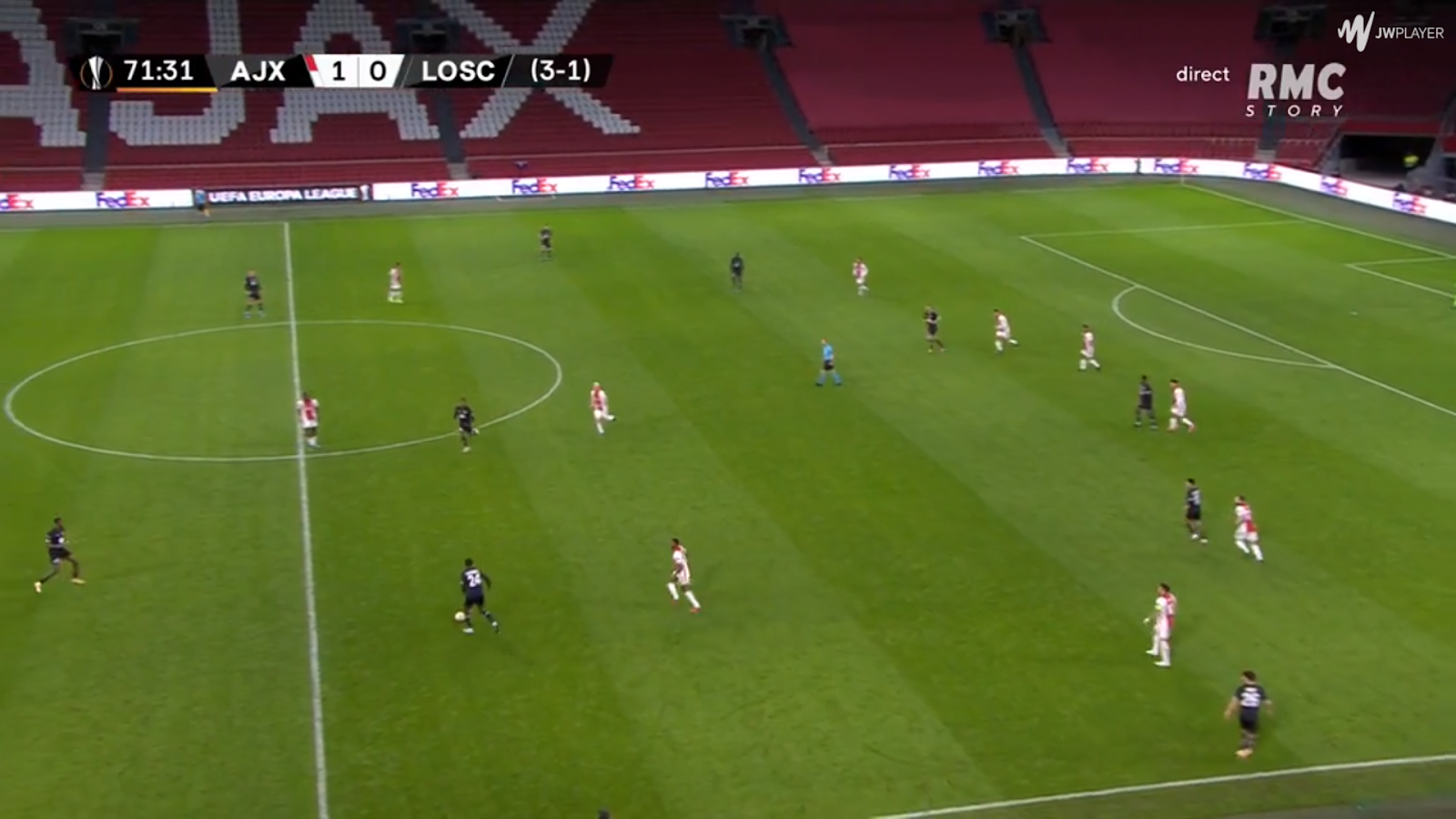 Because Ajax pressed the back pass, the Lille player will have to go all the way back to the goalkeeper which will keep the ball away from the goal and make more opportunities to recover the ball.

This Ajax team is a great case for football teams dominating possession. Their structures allow them to be very effective on the ball and to regain the ball well. The biggest flaw of this team is their defensive organisation without the ball. However, their ability to keep the ball can mean that this flaw isn’t substantial as they can defend by keeping the ball.