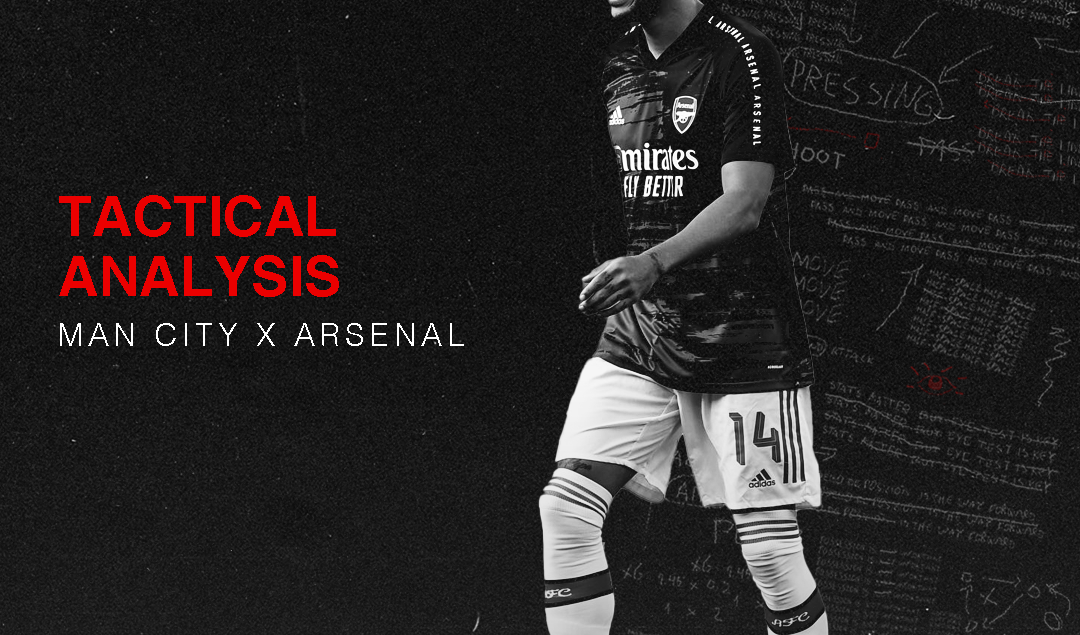 In the second battle between master and apprentice, it was the latter, Mikel Arteta, that came away victorious against his old boss Pep Guardiola in this year’s first FA Cup semi-final. Arsenal defied expectations and beat a heavily favored Manchester City 2-0 in Wembley, in part due to their head coach’s effective game plan, but also due to some superb individual performances by their players.

Arteta started with the 3-4-3 formation that he has favored in all but two games since the Premier League’s restart. Kieran Tierney kept his place in the left side of the back three, alongside David Luiz and Shkodran Mustafi, behind the in-form double pivot of Granit Xhaka and Dani Ceballos.

Hector Bellerín came back in at the right wing-back spot, and the usual front three of Pierre-Emerick Aubameyang, Alexandre Lacazette and Nicolas Pépé also started. The one surprise selection was Ainsley Maitland-Niles at left wing-back, who did a great job defensively against Adama Traoré at that position late on in the 0-2 win at Wolves two weeks ago.

Guardiola named an unchanged side from the one that beat Arsenal 3-0 in June at the Etihad. Youngster Eric García started alongside Aymeric Laporte, Kyle Walker and Benjamin Mendy in the back four.

Opting against the use of a natural no. 6, İlkay Gündoğan partnered Kevin De Bruyne and David Silva in midfield, behind the regular front three of Raheem Sterling, Gabriel Jesus and Riyad Mahrez.

Just like in their win against Bournemouth three days before, Guardiola opted for a double pivot in the build-up, hence a 4-2-3-1 structure. De Bruyne dropped in alongside Gündogan, leaving David Silva in the number 10 role. One of the two would drop in between the center backs to assist the playing out from the back.

The full backs drifted high and wide, acting as outlets when City could not progress the ball centrally. Sterling operated in the left half-space and would occasionally drop deep to receive the ball, taking turns with David Silva in doing so.

As seen above, Arteta set his team up with an effective high press to counter City’s build-up in the first phase. In a tactic that we have seen Jürgen Klopp’s Liverpool employ in the past against the Citizens, the Spaniard instructed his center forward to focus on pressing the deepest midfielder, Gündogan, and his wide forwards to stay in the half-spaces in order to block the passing lane to the full back, while simultaneously being in a position to press the center backs.

Xhaka also had a very important role in the press. While De Bruyne was originally expected to stay higher up the pitch, the Swiss midfielder responded perfectly to his dropping movement in the double pivot by following and closing him down. This led to a particularly dangerous turnover, which was not capitalized on by Arsenal’s forwards.

The high press led to City clearing it long in multiple occasions, which was mostly positive for Arsenal due to the height advantage their back line had over the opposing forwards. In the times that Guardiola’s side were able to advance into the middle third, the Gunners would retreat into an extremely compact 5-3-2 mid-block, with Pépé dropping to form the middle three.

In this phase, Gündogan drifted deep towards the left, to form a diamond in the build-up, joining the center backs, and De Bruyne at the tip of the diamond, which helped create more angles for the deeper players in the build-up.

In this phase of play, the wingers, Sterling and Mahrez tucked inside in order to overload the middle of the pitch and pull Arsenal’s wing-backs infield. This resulted in an even more compact defensive block, thus opening up the wings, where the full backs were waiting isolated.

From there on, the plan was to get the fullbacks into position for a cross or a cut-back. However, this approach was completely ineffective, as Arsenal’s numbers in the box meant that the ball was easily cleared every time it was crossed in.

Arsenal On the Ball

Arsenal did not have a lot of time on the ball in this game, but when they did, they made efficient use of it. When they played out of the back, their structure changed to what could be described as a variation of a 4-3-3.

This happened through Tierney shifting to the left back spot wide, and Maitland-Niles pushing forward into the left half space, assisting Aubameyang, who operated as an outlet when they were forced to play long due to City’s high press.

The first goal of the night is a perfect example of Arteta’s plan when his team was on the ball: Luiz and Mustafi split wide, creating a back three with the goalkeeper Emiliano Martínez. The double pivot, Xhaka and Ceballos, are just outside the box, and one of the two drops deep to outnumber the press.

Arsenal’s main route of progression was getting the ball to Tierney and Bellerín out wide, who were usually free to receive due to the nature of City’s compact press.

In this instance, after the ball reaches Tierney, the Gunners attempt to overload the left flank, with Maitland Niles, Aubameyang, and Lacazette converging, the later of which did an excellent job dropping deep and receiving the ball as the false 9.

Due to the overload shifting City’s deeper players towards the left side of Arsenal’s attack, as well as Sterling having been left behind after pressing the center backs, there was plenty of space to exploit in the underloaded right side of the pitch.

In this instance, Lacazette receives on the half-way line, and plays a ball to the right where Bellerín has pushed up to join Pépé on a 2v1 against Mendy.

In the end, Pépé has space and time to pick out Aubameyang, who was making a run behind Walker’s back to make it 1-0.

Going into the second half 1-0 down, City’s game plan did not change significantly, but we did see one important adjustment. Guardiola decided to relieve De Bruyne of dropping deep to the first phase of build-up, and pushed him higher up in an attempt for him to connect the attack.

He did that by instructing Walker to retreat and assume the role of inverted full back, so Mahrez could drift towards the touchline and De Bruyne could move up and operate in the right half-space. As he has done so often from that position, the Belgian was able to create multiple chances with his superb crossing, as well as pick out the free man on the opposite flank, usually Mendy.

Guardiola also gave his forwards more freedom by instructing them to rotate their positions between the lines in order to compromise Arsenal’s defensive block. In the example below, De Bruyne finds himself on the left after a turnover and cuts the ball back to Sterling, who is making a run through the middle.

Throughout the second half, City dominated position, but it mostly revolved around circulating the ball sideways just outside the Arsenal box.

The compactness of Arsenal’s 5-3-2 low block forced every City attack towards the wings, and the crosses were coped with excellently by the Arsenal defence. Their three center backs combined for 26 clearances, with David Luiz alone completing 11.

As time went by, City kept committing players forward. In particular, even their two center backs spent most of the second half close to the final third, making them vulnerable to counter attacks. Arsenal were not able to build out from the back, and kept resorting to clearing it long when they won the ball due to their opposition’s counter-press.

However, the one time they were able to build effectively towards City’s half, they managed to get a second goal. After a corner kick was cleared, Pépé headed it to Tierney with space to attack. The Ivorian continued running and was found by the left back on the half-way line.

Pépé then held the ball up expertly and played it back to Tierney, who spotted Aubameyang’s run in behind the City back line.

He played an inch-perfect ball to the Gabonese striker, who found himself 1-on-1 against Ederson and slotted an ice-cool finish home to end the Citizens’s hopes of a comeback.

On the one hand, while the results have been up-and-down, it is clear to see that Arteta has transformed this Arsenal team into a competitive side, and an FA Cup win in his first season in charge would be further evidence of that. On the other hand, this game was another example of some of the frustrations that have plagued Manchester City throughout this season, such as the inability to come back from a deficit.