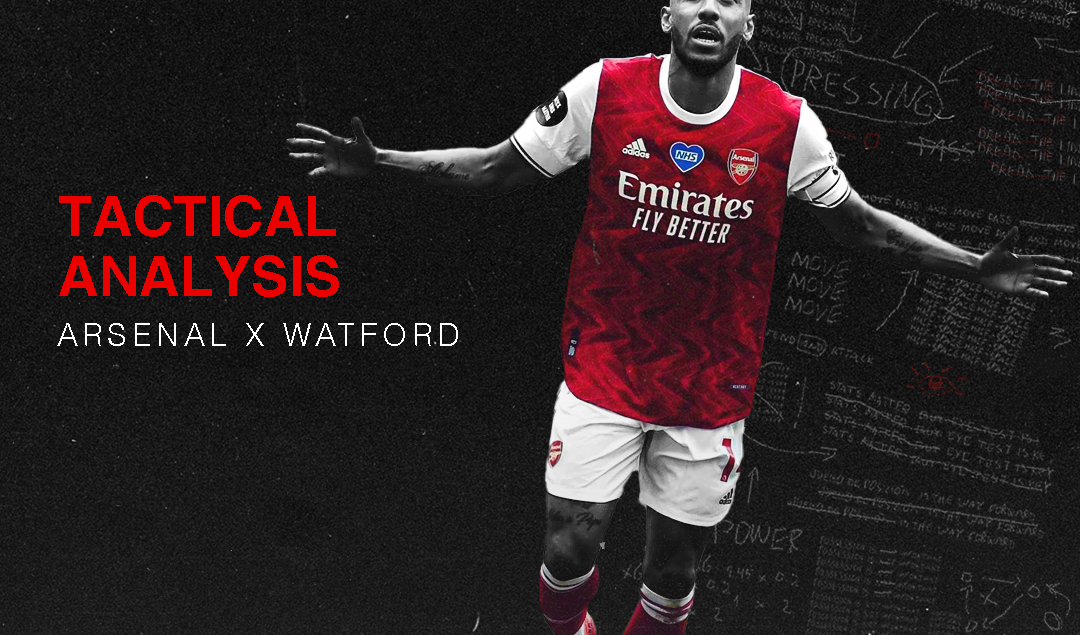 In their final match of the 2019/20 Premier League season, Arsenal took on Watford, who were in dire need of a victory in order to stay up. But Arsenal’s attack proved to be too strong for Watford’s helpless defence, and the Hornets themselves 3-0 down within half an hour.

The game eventually ended up 3-2 in Arsenal’s favour, with Watford dropping down to the Championship and Arsenal finishing 8th in the table. In this article, I will be taking a look at the tactics deployed by both the managers and how ultimately it impacted the game. 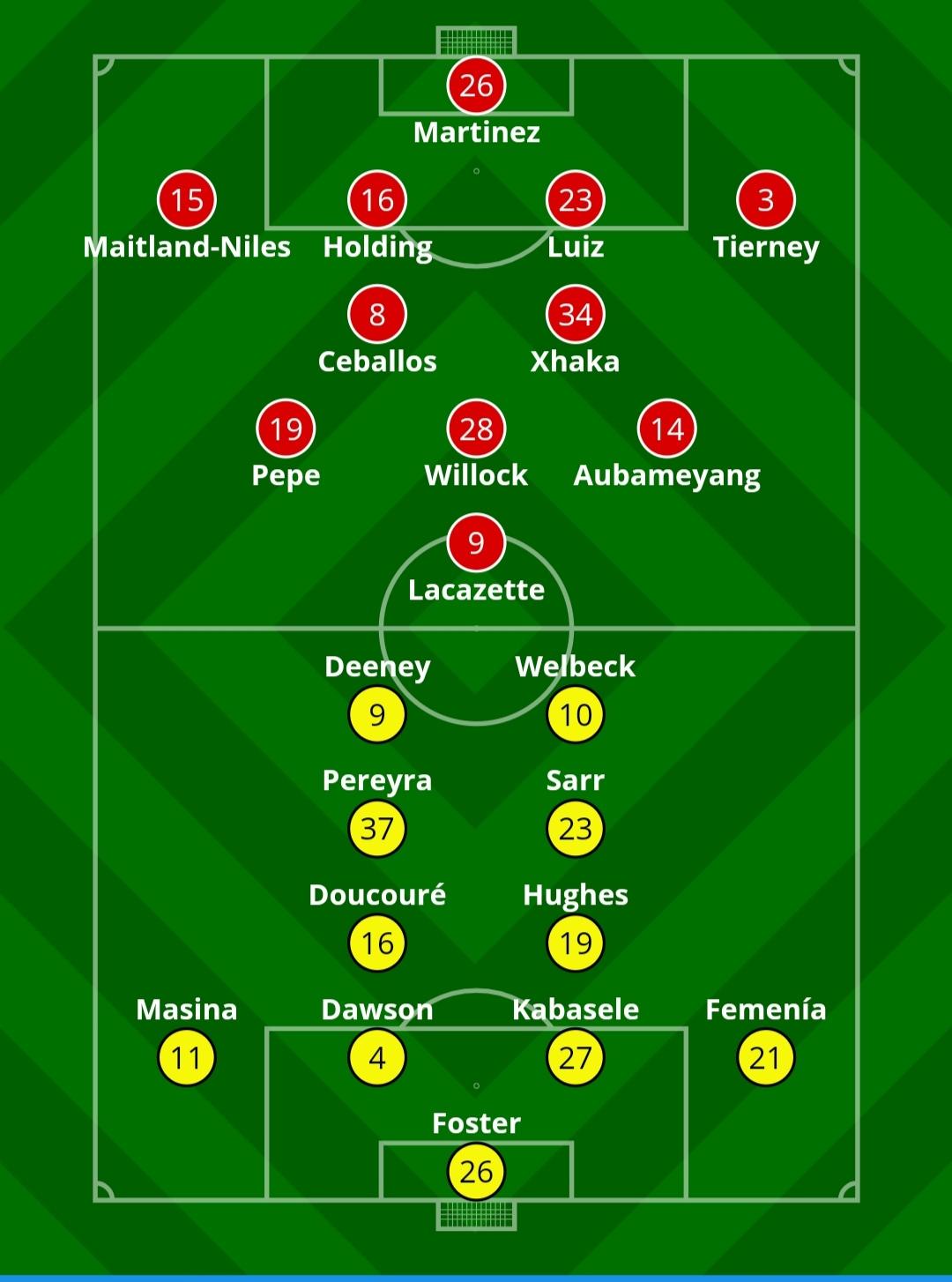 Since Arteta’s appointment in December, Arsenal have come leaps and bounds in terms of playing out from the back. The new build-up structure creates numerical superiority in the first phase and helps to bypass the first line of press.

Arsenal took a diamond shape in build-up with Granit Xhaka dropping to the left to form a back three (creating a 3v2 against Watford’s first line of pressure). 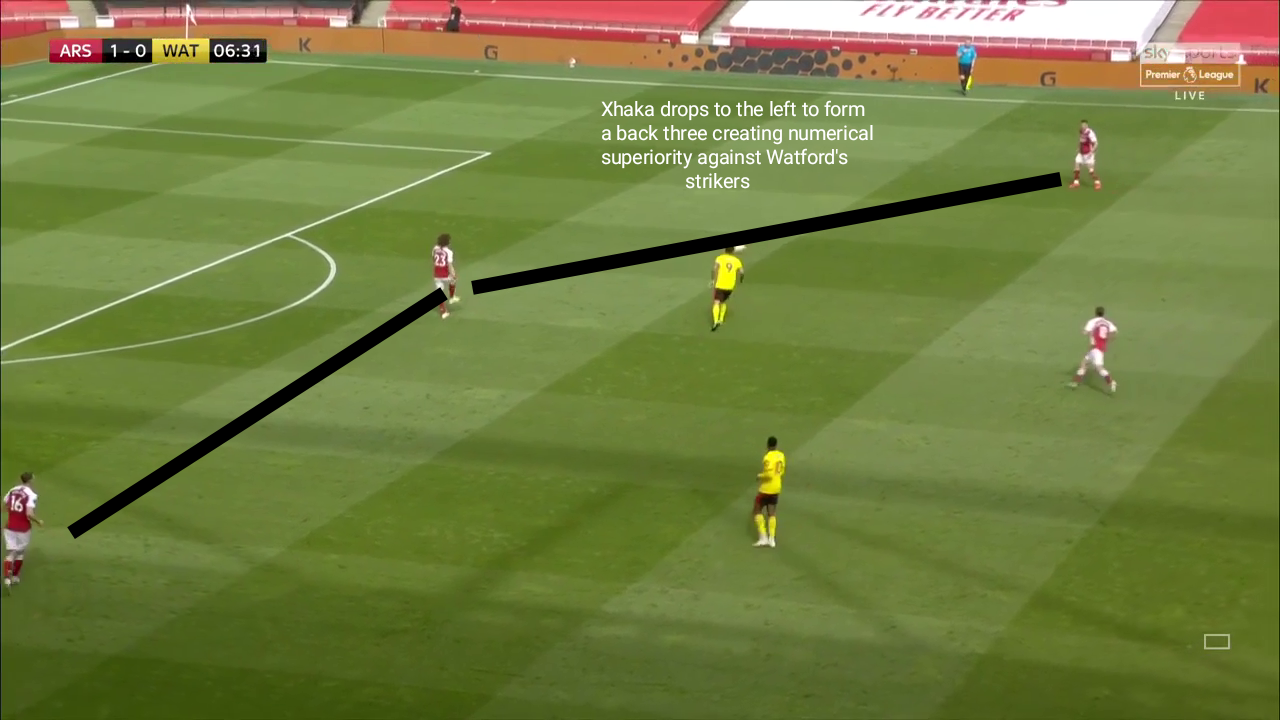 This allows Arsenal to use Kieran’s Tierney’s attacking prowess high up the pitch on the left, as he almost operates as a winger in possession.

Due to the numerical superiority being created by Arsenal in the build-up, Watford had to often push one of their midfielders high to support the press, but this would lead to gaps in midfield which were smartly exploited by Arsenal players, especially Willock. 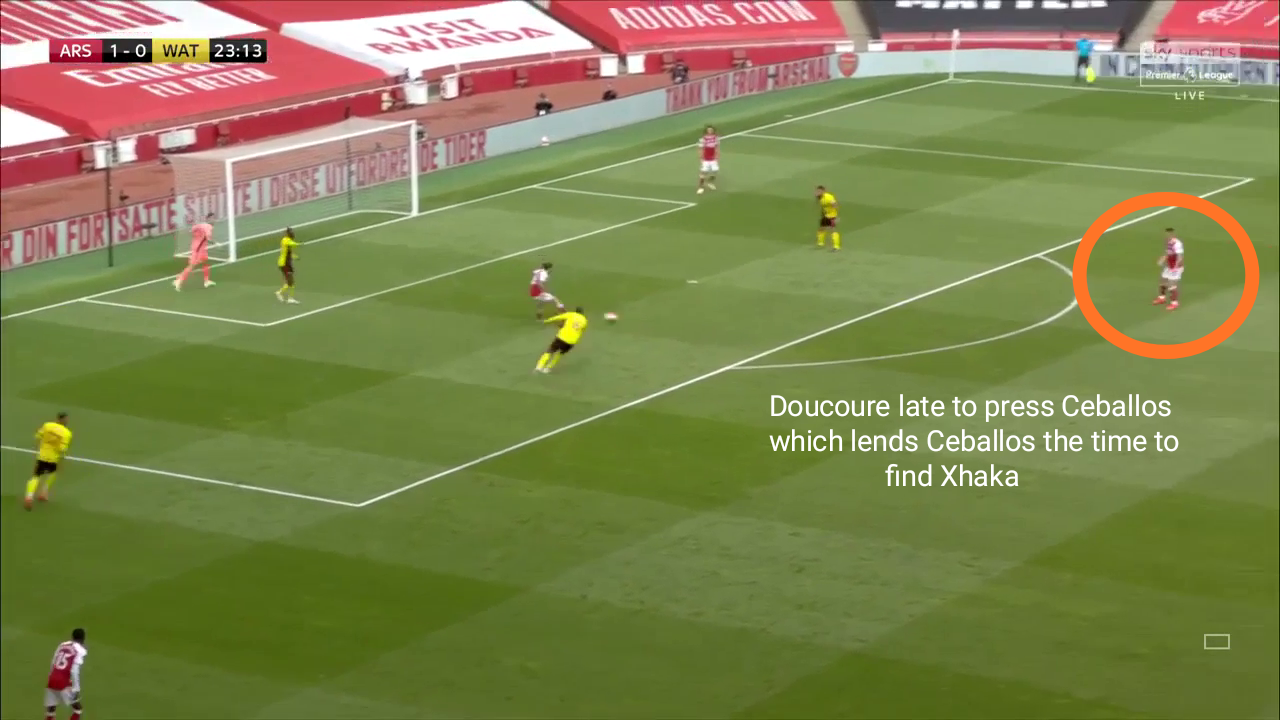 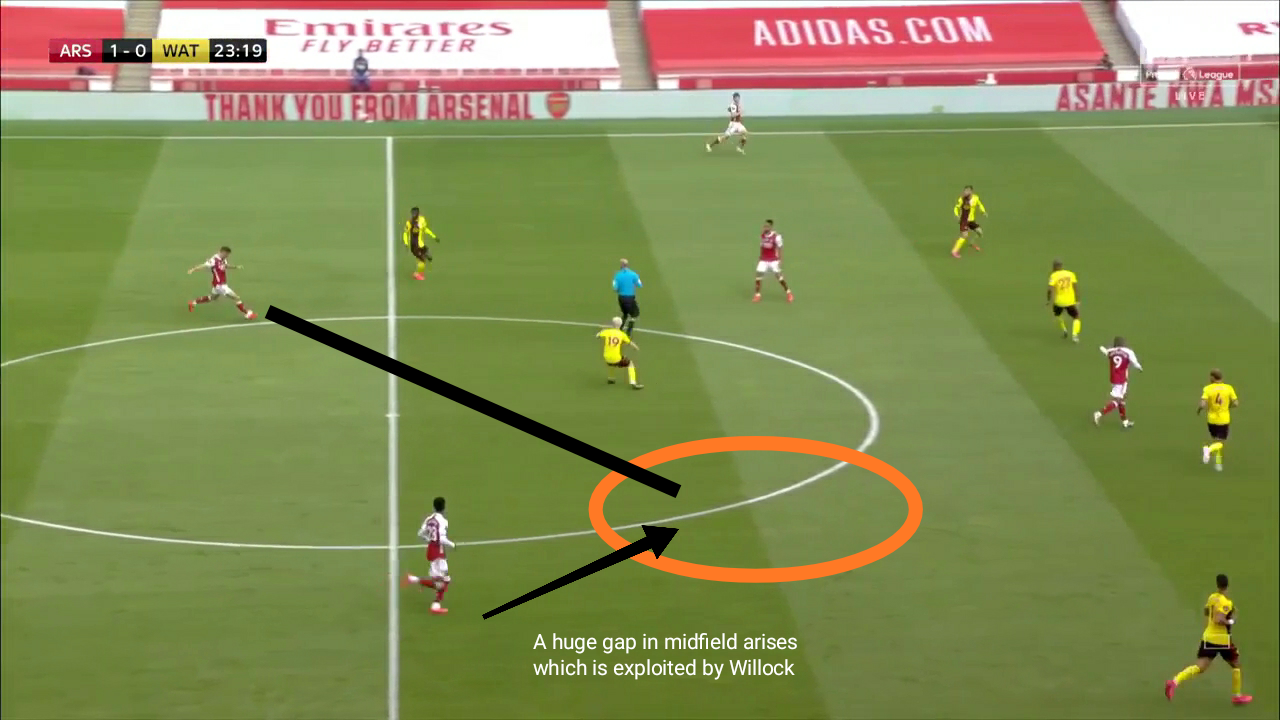 Willock was then able to find Nicolas Pépé on the right, who then switched the play to Pierre-Emerick Aubameyang on the left, who laid it off for Tierney to fire past Ben Forster to make it 2-0 for Arsenal.

Apart from the goal, Willock positioning was key for Arsenal to progress the ball in the final third. He also provided support to Pépé (who since joining Arsenal has lacked support and players around him to combine with him). 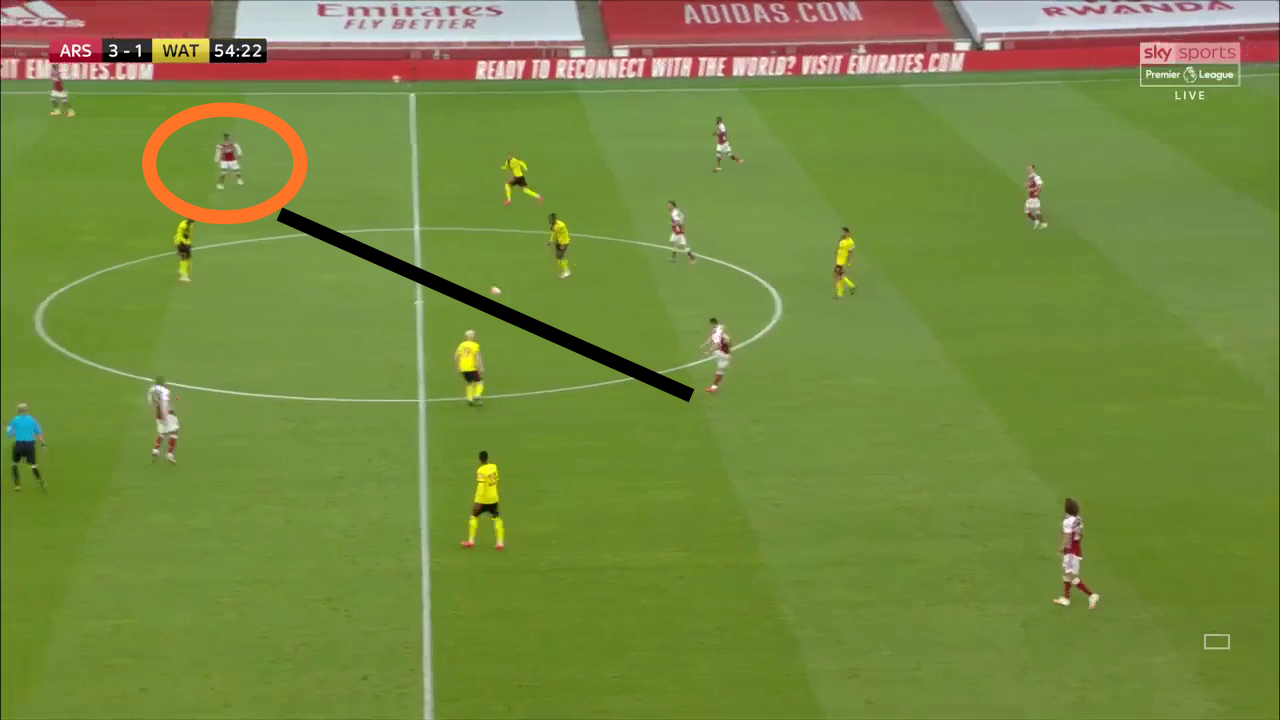 Oftentimes, one of Arsenal’s centre-backs were free on the ball without any pressure from Watford’s frontline. This allowed the likes of David Luiz and Rob Holding to play a ball in behind Watford’s defensive line for the likes of Aubameyang and Pépé, who made diagonal runs from wide areas. This is exactly how their attack was started for the first goal. 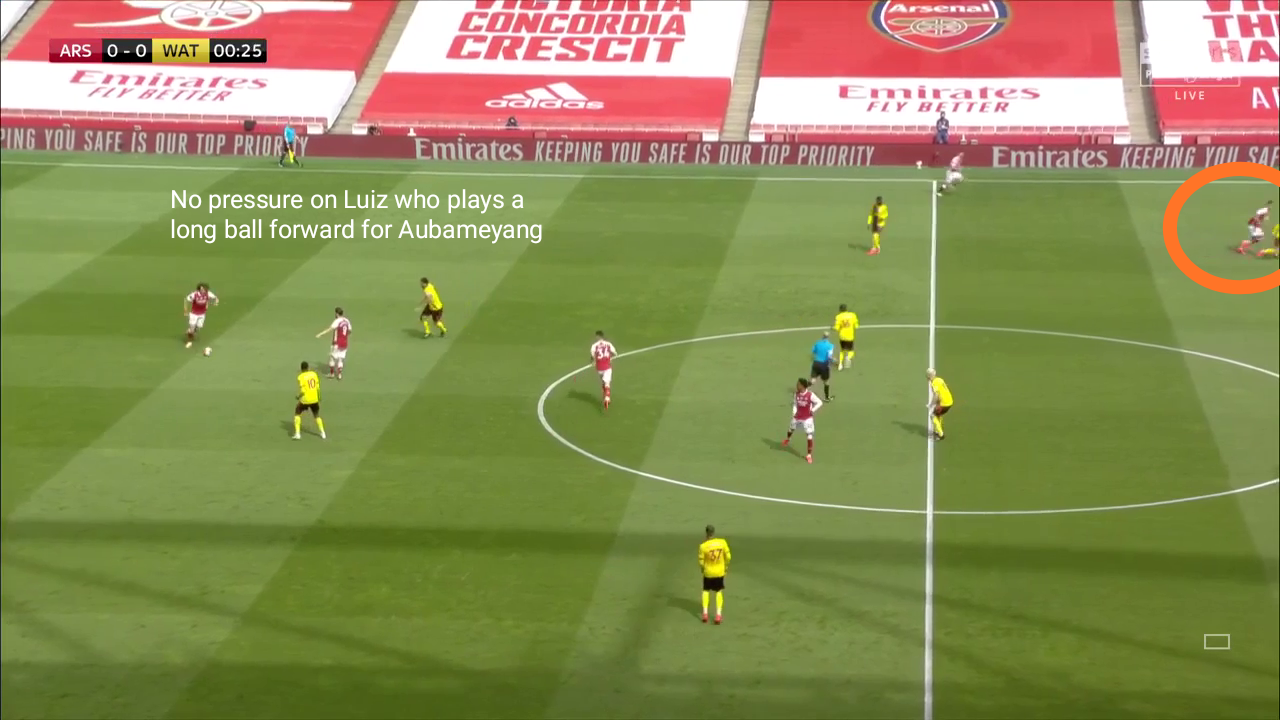 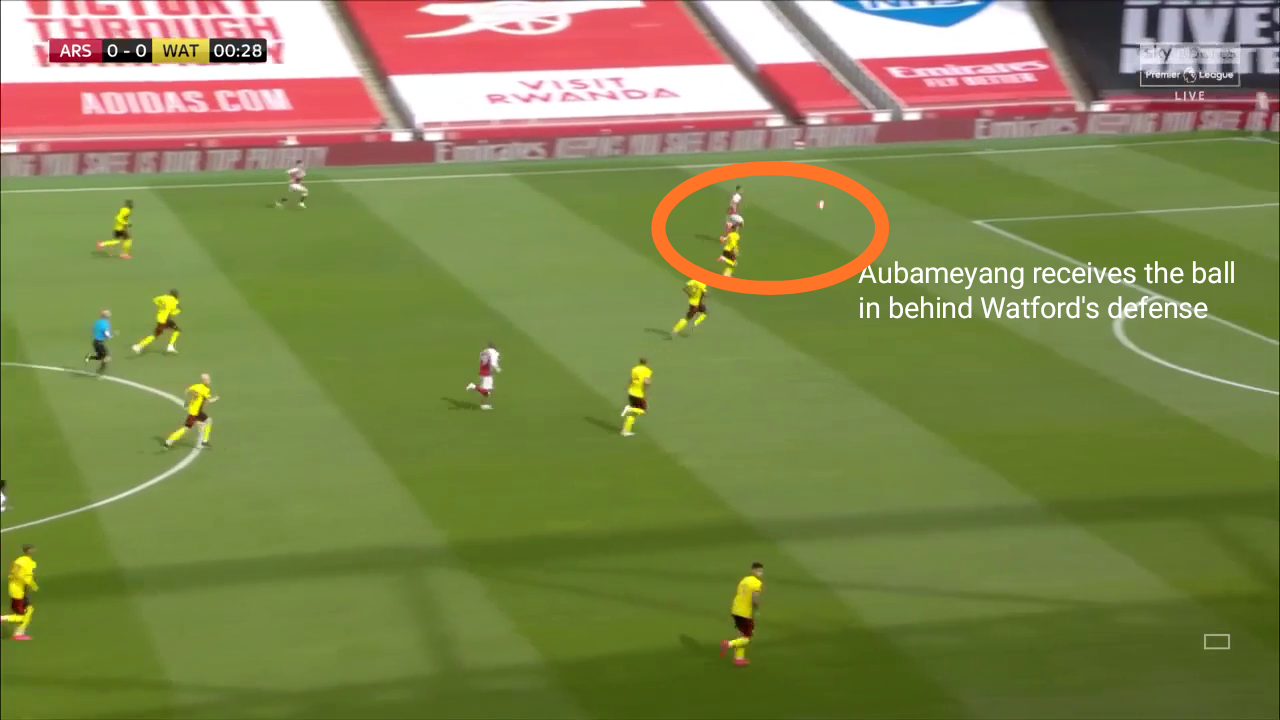 Aubameyang then crossed the ball into the box where Willock was fouled and Arsenal were awarded a penalty which Aubameyang himself converted.

Without the ball, Arsenal deployed a strategic press in which they sought to block off central passing lanes and force the play out wide to the fullbacks. Once the ball was played into the fullback, the nearest Arsenal player jumped on him and often forced the fullback to play a wasteful long ball. 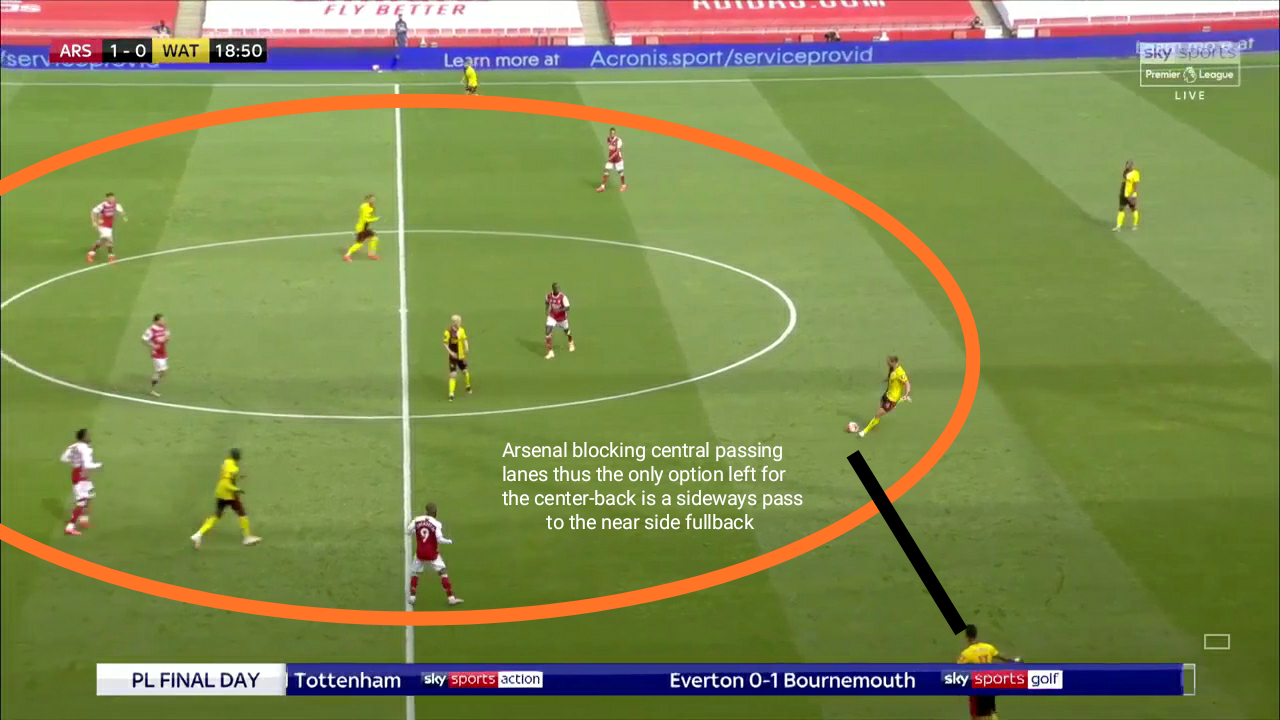 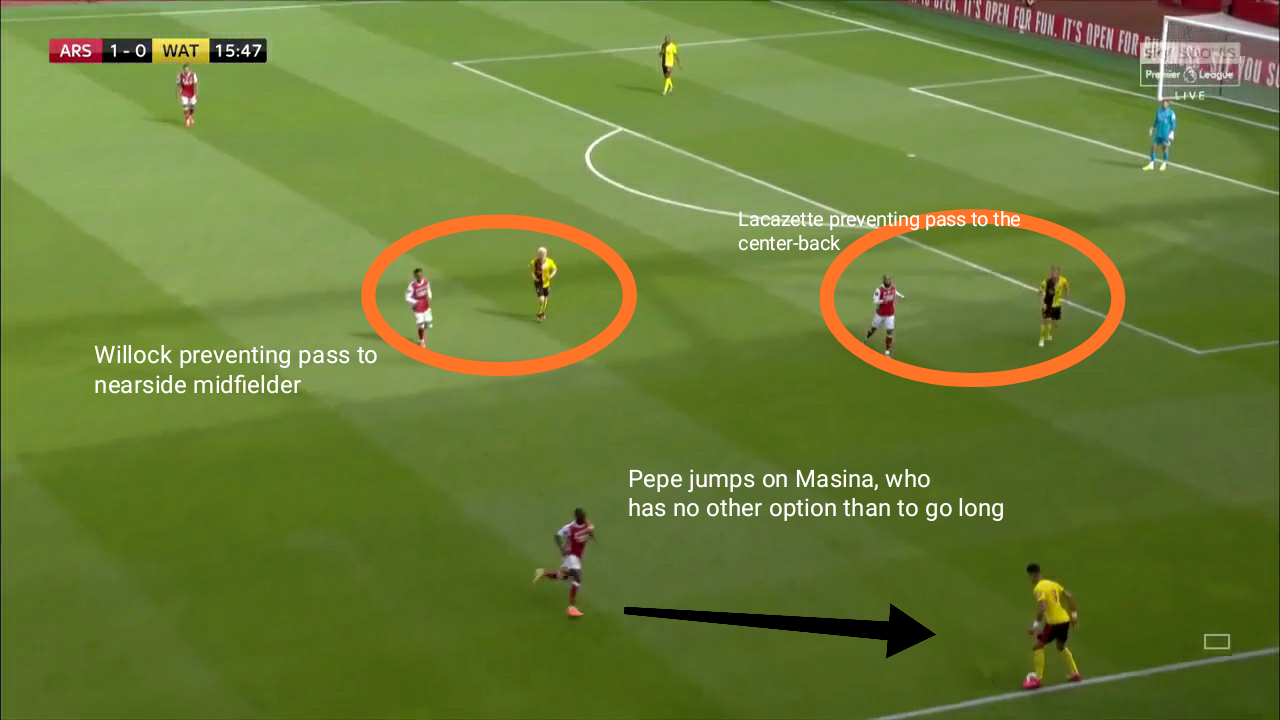 Watford then tried to utilise Troy Deeney’s height advantage to win air duels and flick it on for others while Danny Welbeck would look to make runs in behind. 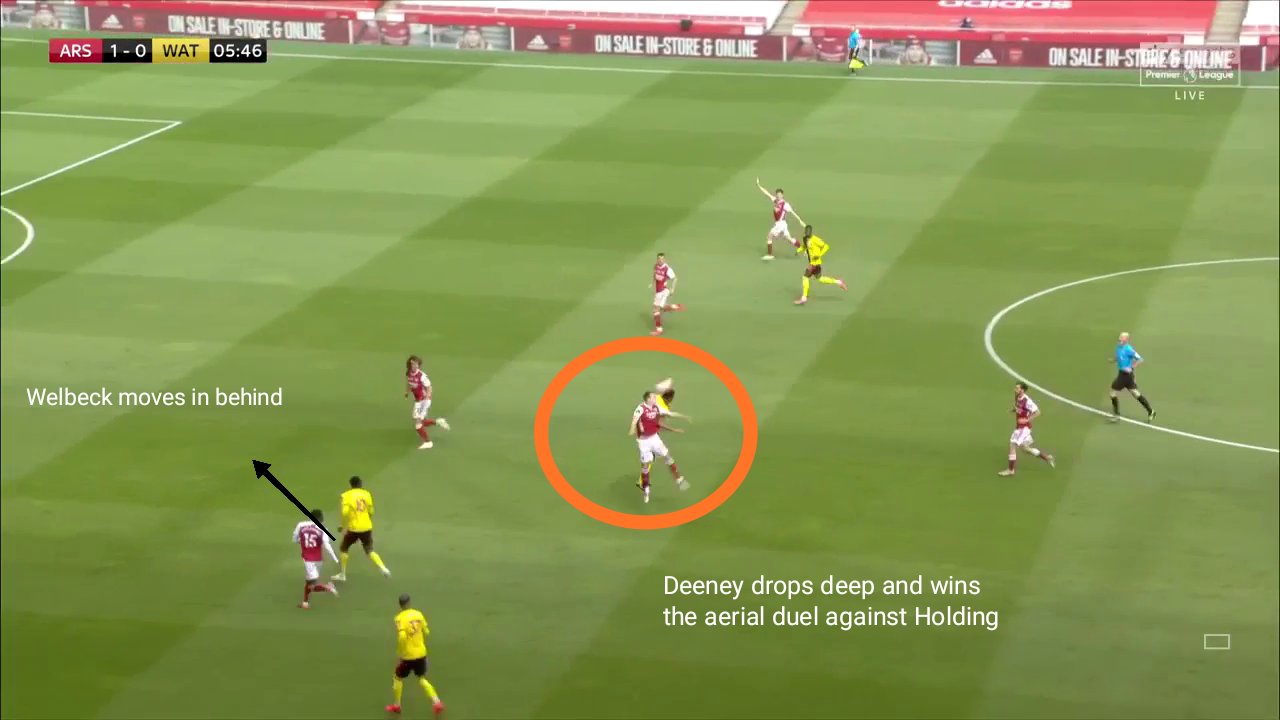 During the initial stages of the game, Arsenal faced difficulties in dealing with direct long balls before they adjusted properly. On the other hand, the main problem for Watford was that when they had the ball in a settled shape, they were unable to progress the ball vertically and had to overly rely on the flanks to progress play. 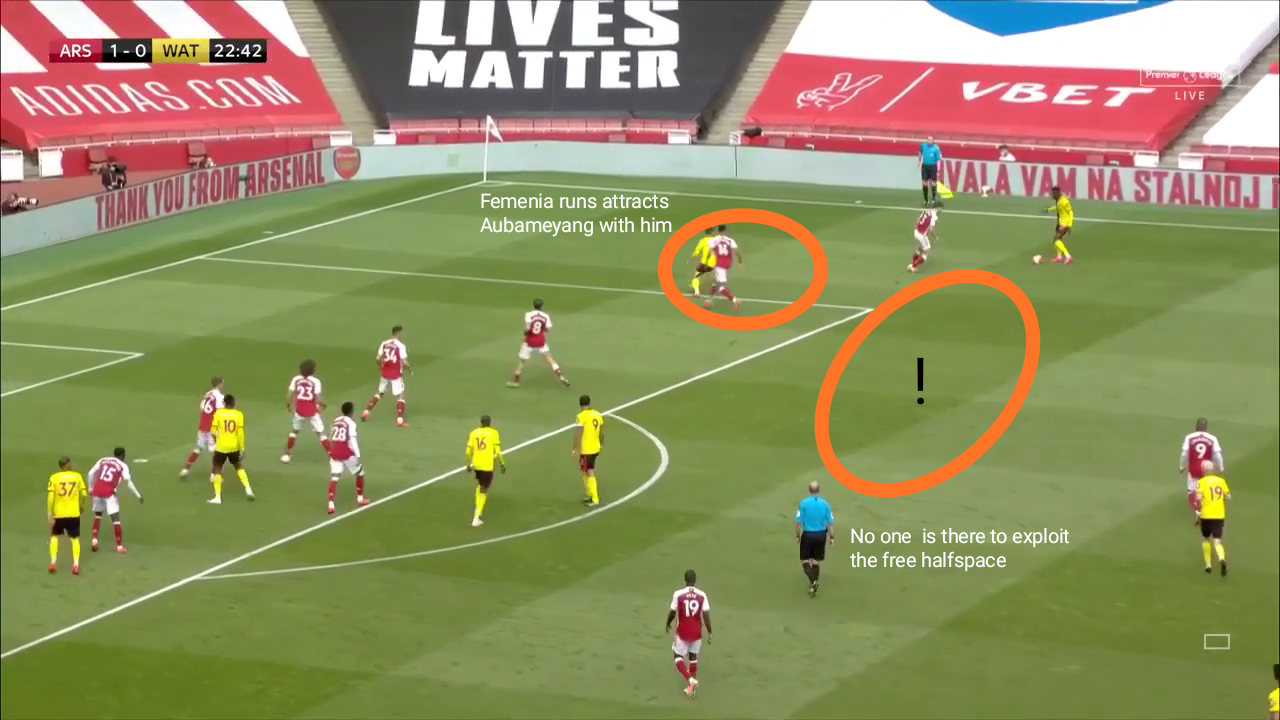 Arsenal still made individual mistakes both in and out of possessions which made the job harder for them but eventually they were able to finish the game 3-2 at the end, ending their season with a win and giving them a much needed boost ahead of the FA Cup final against Chelsea next week.

As for Watford, they’re set for a return to the Championship after a six-year spell in England’s top flight.