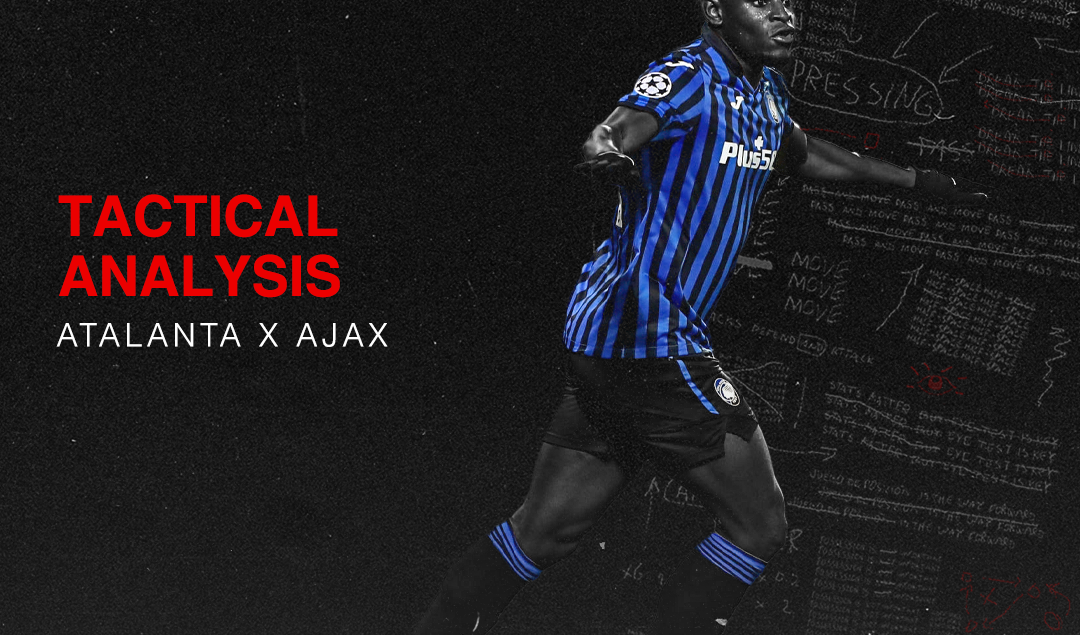 After a thumping 4-0 victory over FC Midtjylland, Gian Piero Gasperini’s Atalanta side hosted Erik ten Hag’s Ajax at the Atleti Azzurri d’Italia. Although Ajax lost 1-0 to Liverpool last week, they created plenty of chances against the reigning Premier League champions and they did so again in Bergamo.

Ajax scored two first half goals against La Dea courtesy of a Dušan Tadić penalty in the 30th minute and a 36th minute goal for Lassina Traoré in his first Champions League start. However, Atalanta mounted a comeback in the second half with Duván Zapata scoring a brace, his goals coming within 6 minutes of each other (54’ and 60’) to rescue a point. Let’s take a deeper look at Atalanta vs. Ajax. 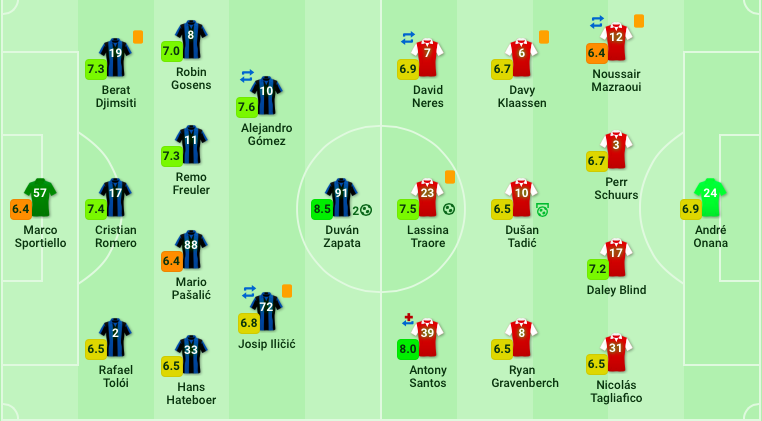 Atalanta operated in a 3-5-2 with Alejandro Gómez dropping into midfield alongside Remo Freuler and Mario Pašalić. Ajax set up in a 4-2-3-1, with Tadić playing at #10 in behind Traoré. They pressed with a 4-1-4-1 (however, we barely saw this as Atalanta generally played long balls into their forwards rather than playing out from the back). When they had to defend their box, Ajax set up in a 4-5-1 (they barely dropped into their shape because the game was so back and forth). 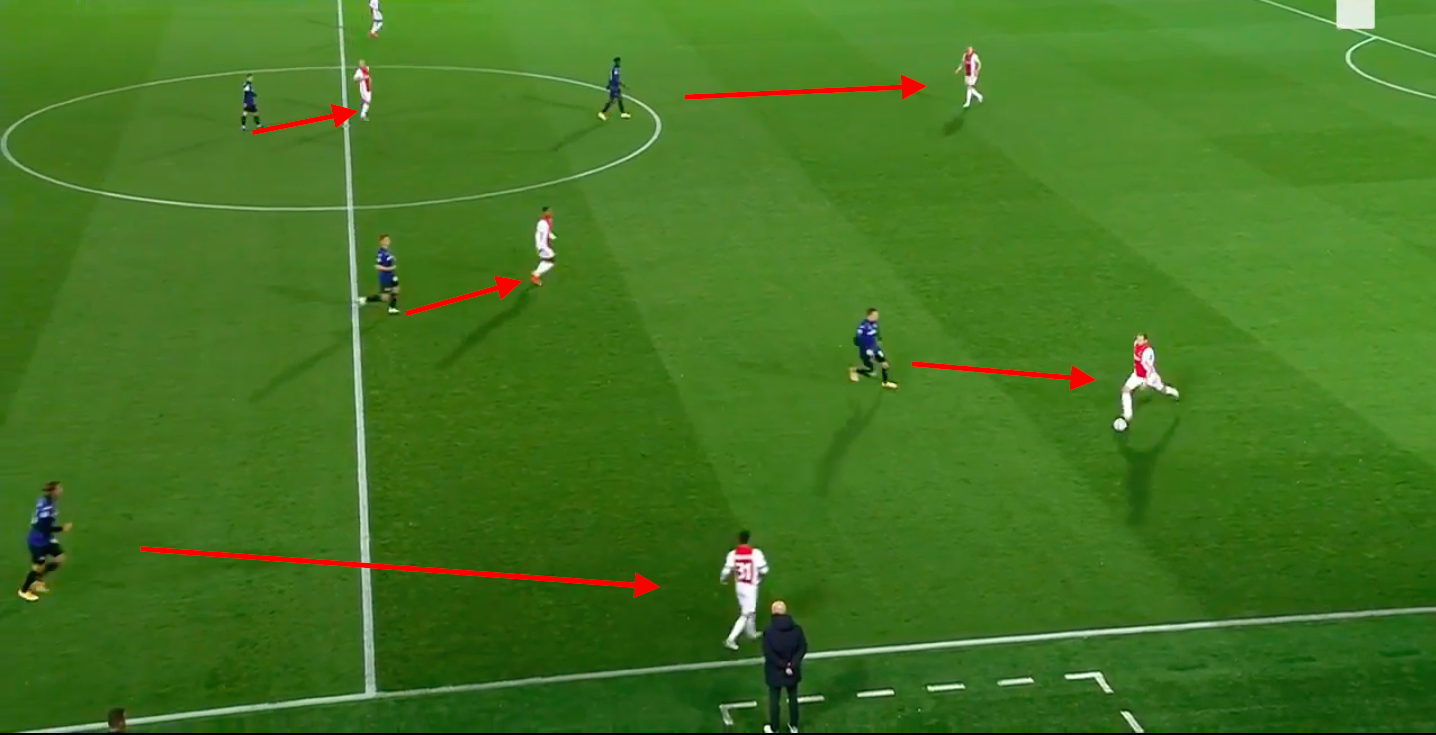 Atalanta pressed in a 3-5-2 shape, as the front 2 (Zapata and Josip Iličić) marked and pressed Ajax’s centre backs whilst 2 of the midfield 3 marked Ajax’s double pivot (Davy Klaassen and Ryan Gravenberch). When required, Atalanta’s wing-backs (Hans Hateboer and Robin Gosens) pushed up to Ajax’s full-backs when they had the ball (Atalanta’s midfielders occasionally shuffled across to Ajax’s full-backs).

This set-up from Atalanta worked well as they often forced Ajax to look for long balls into the forwards in order to progress play. Atalanta would typically win these aerial duels, allowing them to comfortably regain possession. Moreover, Zapata’s aerial threat allowed Atalanta to play long balls into him, helping Atalanta progress play and preventing Ajax from gaining momentum as Atalanta always had a reliable way out of pressure.

The Colombian forward won the battle with 20-year-old center back Perr Schuurs all night, winning aerial battles and allowing Atalanta to wreak havoc on the counter. La Dea dominated the first 25 minutes of the game and Ajax struggled to get a foothold into the game, but a rash challenge from Gosens on Traoré in the box gave Ajax a penalty. Tadić converted the penalty and consequently, Ajax grew into the game whilst Atalanta were put on the back foot.

To make matters worse, Atalanta conceded another goal only 6 minutes later. Nicolás Tagliafico played a clever 1-2 with Gravenberch and the Argentine left back then played a clever ball over the top of Rafael Tolói’s head into David Neres.

Neres then dribbled to the byline and crossed towards Traoré. Atalanta goalkeeper Marco Sportiello failed to gather the low cross and the Burkinabé forward managed to squeeze the ball over the line to make it 2-0.  However, Atalanta came out strongly after halftime and quickly got themselves back in the game.

In the build-up to the first goal, Iličić’s shot is blocked by Daley Blind and the ball falls to Gómez, who manages to put in a superb cross. Zapata comfortably towers over Schuurs and Blind and heads the ball into the back of the net.

Six minutes later, Atalanta dispossess Ajax in the middle of the pitch and spring a counter-attack into action. The ball falls to Iličić, and he holds off Sean Klaiber before playing a pass into Mario Pašalić who drives forward. Blind isn’t completely aware of Zapata’s positioning, and Pašalić passes into Zapata who exploits the open space, driving towards goal and thumping the ball past André Onana.

After Zapata’s 60th minute equaliser, both sides had chances but neither side really forced the issue and created clear cut opportunities. Erik ten Hag will be frustrated that his side couldn’t hold on to their two-goal lead, especially because Atalanta’s goals came from Ajax losing the ball in Atalanta’s half, but he will certainly be pleased with 19-year-old Lassina Traoré, who showed the instincts of a centre-forward with his goal. On top of that, Traoré held play up and was a constant outlet for his side.

Gian Piero Gasperini will have felt that his side deserved three points as they limited Ajax to few chances. Atalanta gifted Ajax with two goals – Gosens gave away an unnecessary penalty and Sportiello fumbled a cross which put the ball on a plate for Traoré. In truth, Ajax created better opportunities against Liverpool last week than they did against the Bergamo side.

Both sides will meet again on Matchday 6 of the group stage on December 9th when Atalanta travel to the Johan Cruijff ArenA. With Liverpool having won both of their games so far, it’s likely that the next meeting between the two sides will be pivotal in deciding who progresses into the knockout stages of the Champions League.