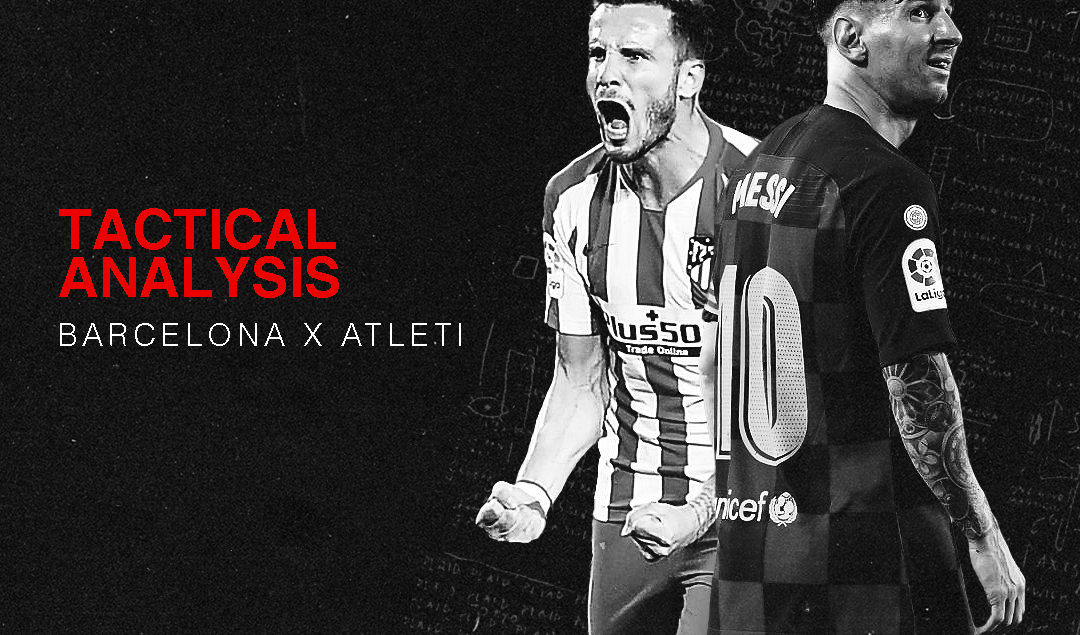 With five La Liga matches left to play, a crucial tie pitted 2nd place Barcelona against Diego Simeone’s 3rd place Atlético Madrid at the Camp Nou. The Colchoneros sought to break their 19-match winless streak against Barcelona in the league.

Under the reign of the Argentine, Atlético’s defensive block has caused the Catalans trouble in the past, and with them only conceding one goal from their last five matches, they posed a daunting challenge for Lionel Messi and company. They would be just as motivated as Barcelona, as only one point separated them from Sevilla in the race for European places.

The two tactical philosophies of the managers would come head to head as Quique Setién’s positional play clashed with Simeone’s iconic defensive block. We’ll see throughout this tactical analysis the patterns used by the Blaugranas in an attempt to break down the Rojiblancos.

Barcelona lined up in a defined 4-3-1-2. La Masia youngster Riqui Puig made his second consecutive start, this time as the attacking midfielder in this setup, behind Luis Suárez and Lionel Messi, the Argentine looking to build on the 11 goals he had scored against Atleti during the Simeone era so far.

On the contrary, Antoine Griezmann would be excluded from the starting line-up for the second consecutive time, whilst his compatriot Clément Lenglet returned after being rotated in the last match against Celta Vigo.

To nobody’s surprise, Atlético Madrid set up in their traditional 4-4-2, with Marcos Llorente being preferred at center forward over João Felix, where he would partner Diego Costa. Yannick Carrasco would play on the left side of the formation over Koke, who was not available due to suspension.

Whilst Barcelona looked to play in a 4-3-1-2 on paper, their formation changed from time to time, as such a narrow shape would never create the width required to break down Atlético’s deep block.

Through positional rotations, this shape morphed across the thirds. When playing in the defensive third, it best could be described as a 3-1-4-2, including the goalkeeper and depending on the positions of the fullbacks. Their primary objective was to create a 4v3 when playing out of the back as seen below.

Marc-André Ter Stegen would split the center backs, making a 3v2 against Atletico’s front two. Long-time mainstay in midfield Sergio Busquets would drop toward the penalty box, drawing a midfielder with him and manipulating the opposition’s defensive shape. From here, he plays a first time pass to Gerard Piqué, who has space to carry the ball forward.

Once into the middle third, the shape shifts to a more conventional and defined 3-4-3. A rotation between the left central midfielder Ivan Rakitić and left back Jordi Alba initiates the movement to this shape as Alba is allowed to play in line with the midfielders, thus creating the balance of width. The back three then creates easy access to ball circulation from side to side.

Setién implemented a 2-3-5 in the attacking third, an increasingly common shape seen around Europe this season against defensive blocks. With a 2-3-5, the forwards can arrive in positions to receive the ball that can then disorientate the positioning of defenders.

The fullbacks were also tasked with providing width in this zone of the pitch, often being the highest positioned players and making penetrating runs in behind. Rakitić was positioned higher on the left, completing the midfield three.

While this seems like an attacking shape on paper, it created a solid defensive balance against Atleti, helping to negate the opponents’s quick counter attacks. Barcelona’s midfield three were always in good positions to outnumber Atleti during defensive transitions, shutting off space for them to exploit.

With so many players in advanced positions, this system created a net for counter-pressing, as Barcelona players made 30 successful regains from pressure. This helped prevent counter attacks, as when Atlético players looked for close passing options, they were already being closed down.

However, to the detriment of Barcelona’s attacking plans, they would often reset possession after winning back the ball rather than directly engaging in counterattacks immediately after.

Simeone has been the face of what most would label “defensive football” over the past decade. With the purpose of preventing vertical and horizontal space, they challenged Barça’s positional play. In this game, they defended in a 4-4-2 in the middle third, but shifted to a more asymmetric shape when inside their defensive third that resembled a 5-3-2.

One of the main objectives in the middle third for Barcelona while in possession was to have Rakitić operate as a deep playmaker from the space vacated by the marauding Alba. When he would carry the ball forward, Busquets would move into the left half-space and so would Puig, creating a four-man diamond with Alba on the left.

However, with so much time and space on the ball, the Croatian would waste time scanning the pitch and indecisively searching for a pass. In most of these sequences this allowed Atletico’s 4-4-2 shape to shift and cover the space. They remained compact when defending the half-spaces in this shape, eliminating the most progressive and dangerous vertical passing option that was Puig.

This sequence would be canned all together in the second half as Busquets pushed into this space created a gap to exploit in attacking transition. Costa could drop into the space left behind and look to initiate a counter attack behind all three of Barcelona’s midfielders.

Part of the reason Setién has employed a 2-3-5 shape at Barcelona was to create a 5v4 overload against teams who use a four-man defense. In order to counteract this, Simeone would have his team form a makeshift back five with Ángel Correa, the right-sided midfielder, acting as a wingback. This was a masterstroke from Simeone as it helped eliminate vertical and horizontal space for Barcelona to exploit.

Firstly, vertical passing options between the defensive and midfield line to Messi, Puig or Suárez would be practically eliminated completely. With equal numbers in the defensive line, there was always a spare player to engage the player receiving between the lines.

In addition, the defensive and midfield lines were so tight that playing through this space was extremely difficult for the Catalan side. Barcelona’s tempo of play especially in the first half was slow, making their switches of play ineffective. Atlético’s tactics to prevent horizontal space did not help affairs either.

Correa would track the movements of Alba on one side as long as the ball was in the defensive third, seeing to it that Alba did not find himself in a single shooting position throughout the 90 minutes. On the opposite side, Carrasco would double up with Renan Lodi, ensuring he was never in an isolated situation against Messi or Nélson Semedo.

The relationship between Arturo Vidal and Messi has been a particular highlight, as seen below, where the South Americans swap positions in an attempt to open space. Messi drops, Saúl Ñíguez follows him, thus opening space for Vidal to move into. Unfortunately, the rotation was too slow and Messi did not recognize the pass in time to make a pass to the Chilean, who was making a run to bypass the defensive block.

Rotations between him and Semedo were the most effective, as they allowed Messi to scan the entire pitch in space. From these situations, he could look to execute game-changing passes and pick out holes in the defensive shape.

In this sequence, Messi sees an opportunity and Puig makes a run to capitalize on it. He makes a perfectly weighted pass to the youngster, but he cannot make the most of it.

As the match went on, Messi’s influence grew as he recognized how impactful he could be from these positions. As Atlético dug in deeper, he got multiple opportunities to conjure penalty box entries but could not find the targets of the penetrating runs.

Their talisman wouldn’t be only one who decided playing through the inside of Atlético’s shape was not optimal, as Setién changed Barcelona’s in-possession shape at halftime along with their attacking objective.

Rather than playing through the block, they looked to play around it. Switching to a 3-5-2 / 3-1-4-2 formation, Setién shifted Puig and Busquets’s starting positions deeper in the middle third.

The change inspired an incredible performance level out of Puig, who would be positioned deeper than in the first half within the left half-space. In the image below, we can see that from a deeper position, the game opened up for him.

With space to move into and options to pass to, the game was in front of him, rather than behind him. He grabbed it with both hands, changing the tempo of the team completely. Making lightning-fast decisions, he moved the ball quickly around Atlético, finding gaps before the team could shift to cover the space.

Although they created two big chances compared to zero in the first half, Barcelona could not make a breakthrough in open play to take all three points.

For Barcelona and Setién, this will be some tough dropped points considering the grand scheme. Despite effective changes in tactics and individuals growing into the game as it went on, Atlético Madrid grabbed a deserved draw, giving their crosstown rivals an opportunity to seal the title in the coming weeks.

Simeone’s asymmetric shape out of possession fulfilled its purpose, with the Rojiblancos winning the xG battle over Barcelona. On the other hand, a lack of distinct patterns and runs to penetrate a defensive block was on full show for the Catalans.

One sequence where Barcelona actually combined to connect a pass to a player making a run in behind forced a mistake out of an Atlético defender and won a penalty. Generally, changes came too late as Ansu Fati’s movement in behind or Griezmann’s effectiveness between the lines could have been a welcome addition earlier on in the match.

Moving forward, Puig’s role in the 2nd half could become a permanent one as he’ll want to continue where he left off, dictating the match in a very positive way, providing something that Rakitić, Busquets, Vidal and Arthur have failed to offer in ball progression this season.