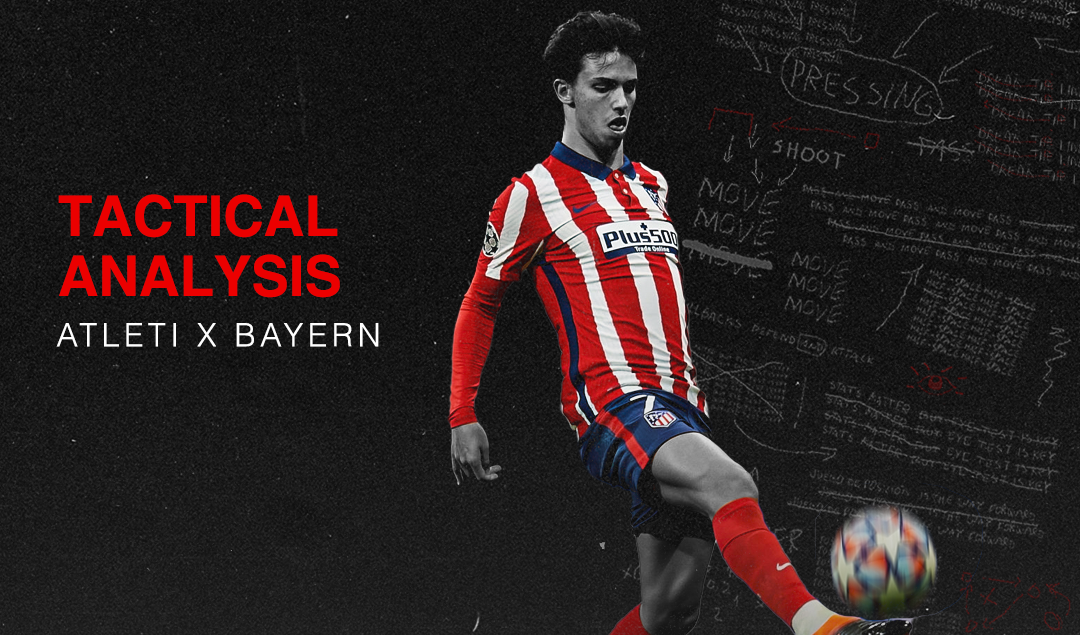 The first day of December saw an important Champions League game between Atlético Madrid and Bayern Munich at the Wanda Metropolitano. The importance of the game was felt more so by Los Rojiblancos, as they went into the fixture needing a win to secure their place in the Round of 16, whilst the Bavarian side had already qualified.

The tie finished 1-1 and displayed an intriguing tactical battle by two of the most respected managers in World football; Diego Simeone and Hans-Dieter Flick.

Simeone made several changes to the team that narrowly defeated Valencia at the weekend. Rather than continue with the 3-4-3 that he has experimented with this season, ‘El Cholo’ returned to his tried and trusted 4-4-2, with Yannick Ferreira Carrasco playing as the left-sided midfielder and Renan Lodi, who played at left wing-back at Mestalla, dropping to the bench.

After coming off the bench during Saturday’s victory, mercurial 20-year-old talent João Félix returned to the side, playing as a second striker. With Luis Suárez and Diego Costa unavailable due to injury, Simeone turned to Ángel Correa to partner the Portuguese forward. 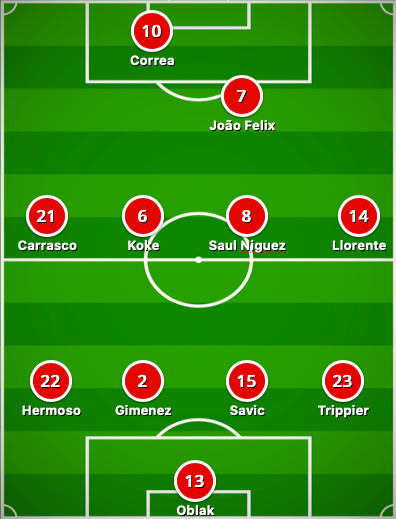 Having already sealed first place in the group following last week’s 3-1 victory over Red Bull Salzburg, Flick made a total of 10 changes to the Bayern team that defeated Stuttgart on Saturday. Alexander Nübel, who joined on a free transfer from Schalke in the summer, started between the sticks, whilst Bouna Sarr came into the side for his compatriot Benjamin Pavard.

Rather than the 4-2-3-1 that Bayern have grown accustomed to, the away side went with a 3-4-3, with Flick opting for a mix of seasoned veterans and young prospects. 17-year-old Bright Arrey-Mbi played opposite Sarr at the left wing-back position, and Niklas Süle started in place of Jérôme Boateng on the right side of defense. 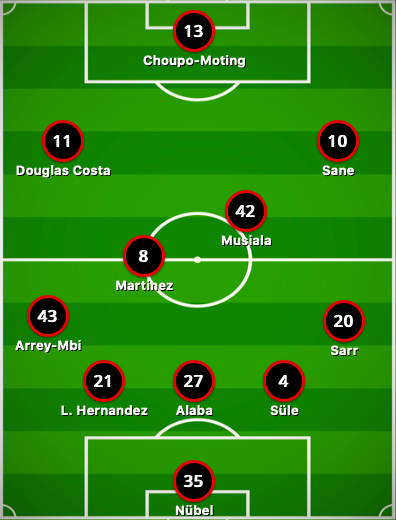 In possession, Bayern Munich adopted an expansive strategy. Despite being somewhat of a surprise that Flick opted for a variant of a 3-4-3, it meant that Bayern could, in fact, commit more players in a forward area. Bayern were keen to try to create overloads in areas in the middle and final thirds with the aim of disrupting the characteristic and impressive low-block set out by Atlético Madrid.

There were times when Atlético tried to press the outside centre-backs, however sometimes Atlético reverted into their low block 4-4-2 for defensive coverage across the pitch. With David Alaba playing as the middle centre-back, he was rarely pressurised, creating angles to play the ball to one of Lucas Hernandez or Süle who had advanced with the aim of creating overloads in the wide portion of the pitch.

When Bayern’s outside centre-backs had the ball, the formation when building up represented a 3-2-5 with Costa and Sané inverting into the half-spaces and Bayern’s wing-backs offering the width. 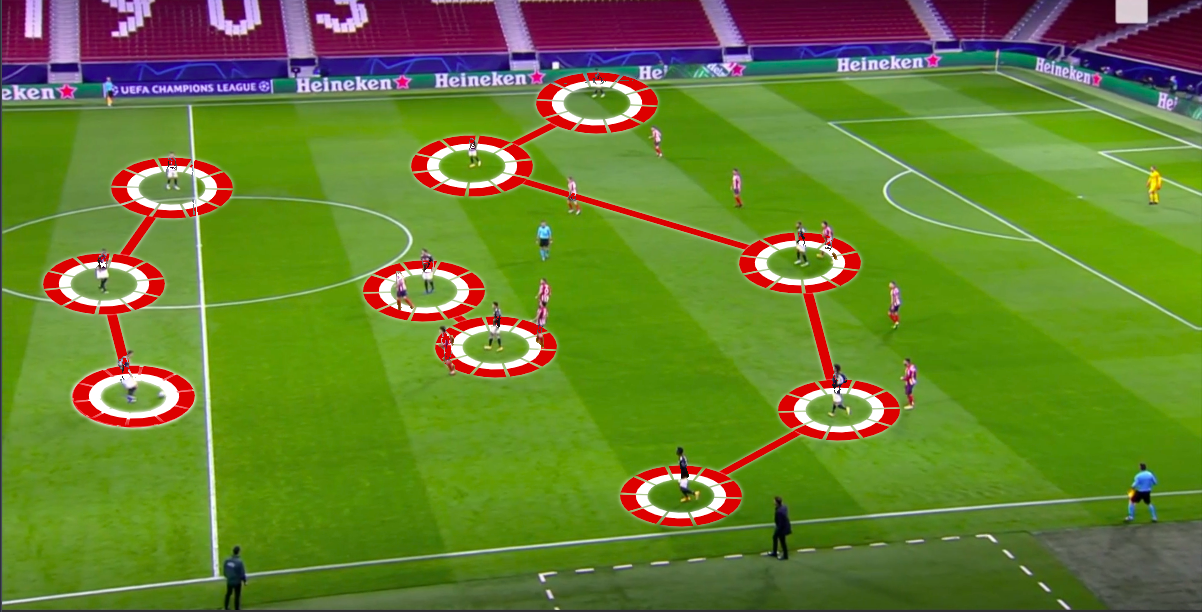 It became very apparent early on that Bayern were conscious that they had to break down Atletico Madrid’s very impressive defensive organisation. One of the ways they aimed to do this was to have an asymmetrical pivot in central midfield with Martínez dropping into a deeper position to offer the central defenders a passing option, whilst the more attacking minded Musiala operated higher up the pitch, often roaming into the half-spaces.

As a consequence, however, it meant that with Atleti’s forward line dropping deeper, Bayern were outnumbered in the middle third when building up the play and were vulnerable to defensive transitions if there was a turnover in these areas.

To combat this, Bayern looked to play into the final third and bypass the middle when possible. In the below example, Martínez shows for the pass whilst Musiala roams into the half-space on the right-hand side. 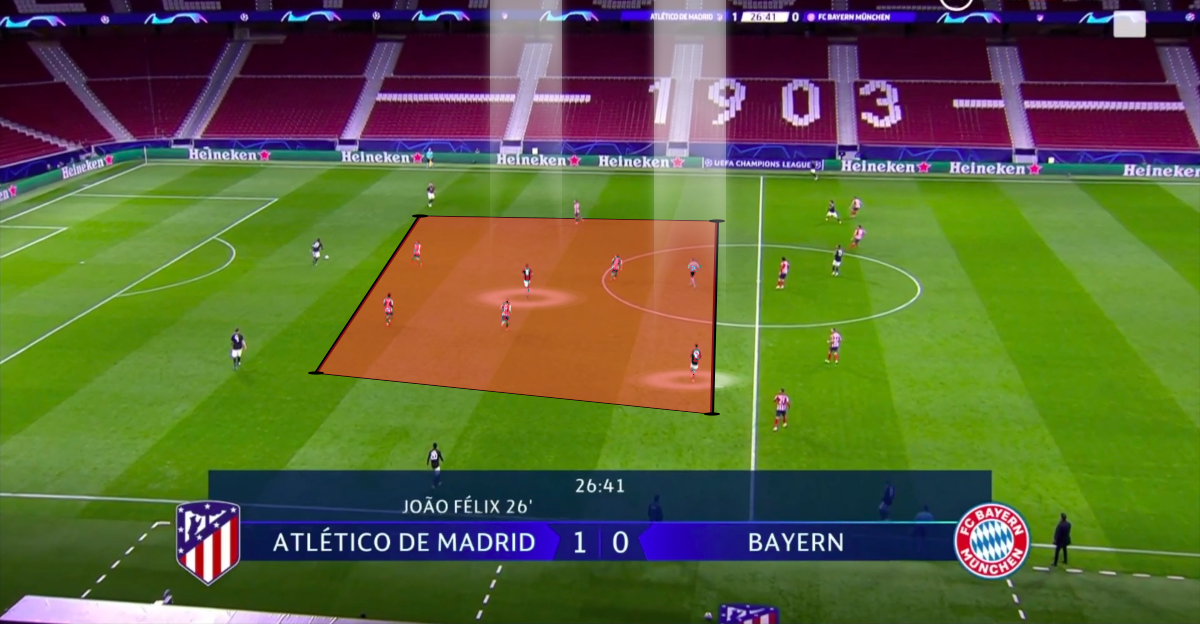 More often than not, Atlético used the touchline as an extra defender, as a consequence they shut off the option for Bayern to play into the centre. This turned out to work to Bayern’s favour as they could force more Atlético players to cover in wider areas, leaving more space centrally, with the outside centre-back stepping up and joining one of the central midfielders (often Musiala) on the right-hand side and the winger and wing-back, albeit from a slightly deeper position. 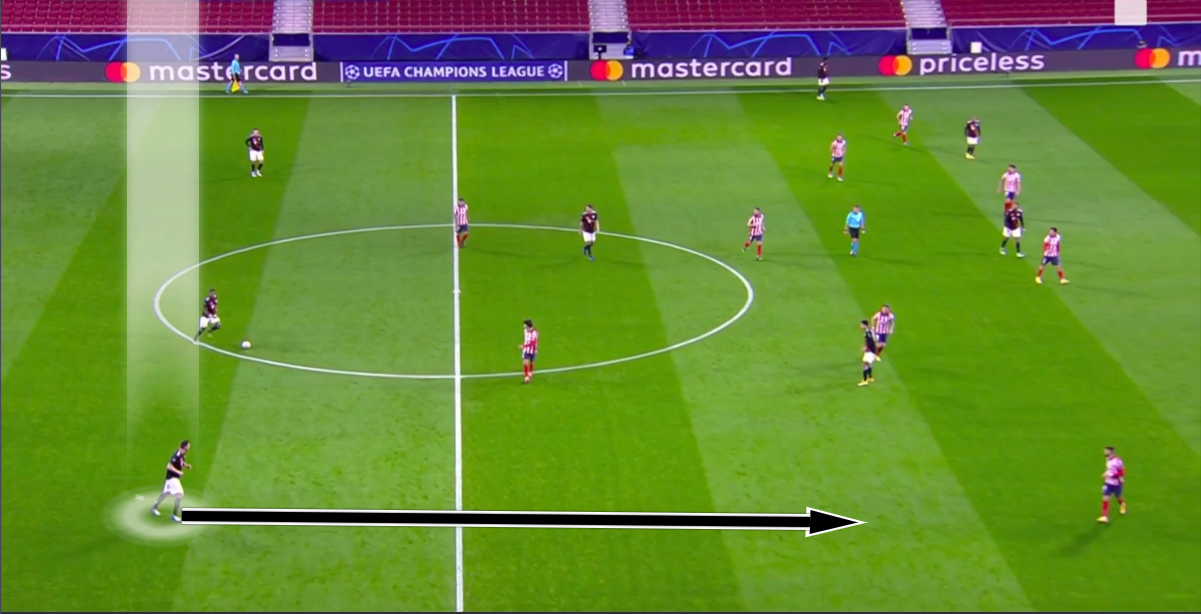 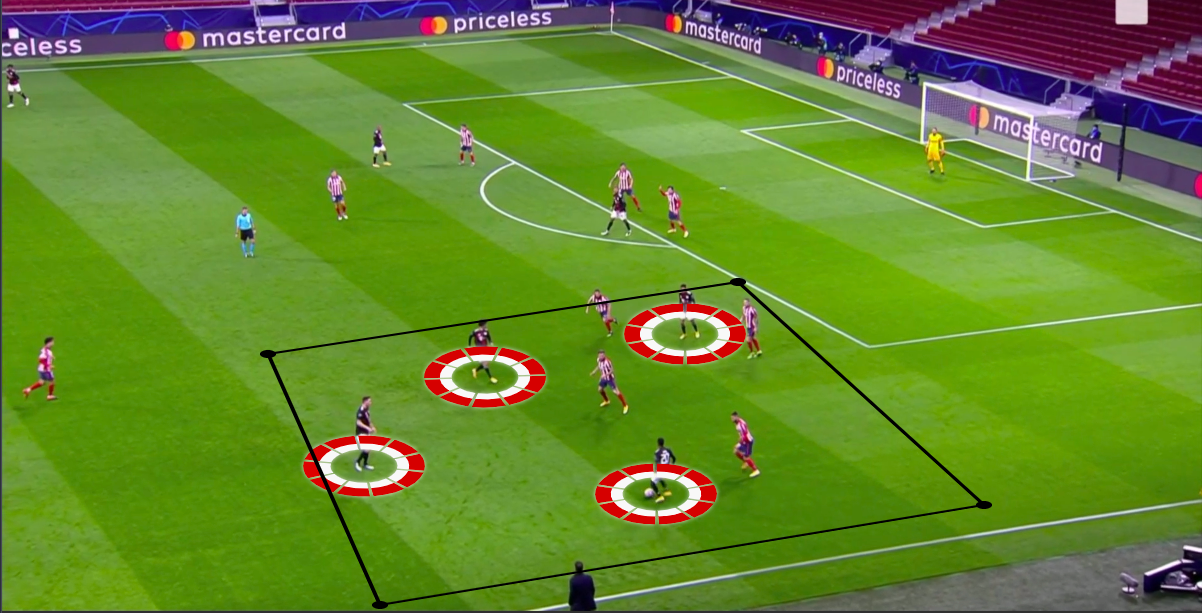 In the second half, Bayern reverted to their more traditional variant of a 4-2-3-1, which became more apparent with the introductions of Thomas Müller for Martínez in the 62nd minute and Gnabry for Arrey-Mbi. Musiala often dropped deeper to receive the ball with Müller adopting his traditional ‘raumdeuter’ role, finding space and penetrating via a dribble or pass, with the German forward winning a penalty late on in the game and rewarding Bayern with a point from their exploits in the Spanish capital.

On the other hand, Bayern’s 4-2-3-1 often left a lot of space in the midfield to be exploited, leaving the Bavarians vulnerable in the instance of a defensive transition if Atlético won the ball back in the middle portion of the pitch. The space was left with Musiala dropping into even deeper positions and his midfield partner, Müller operating in close proximity to the forward line. 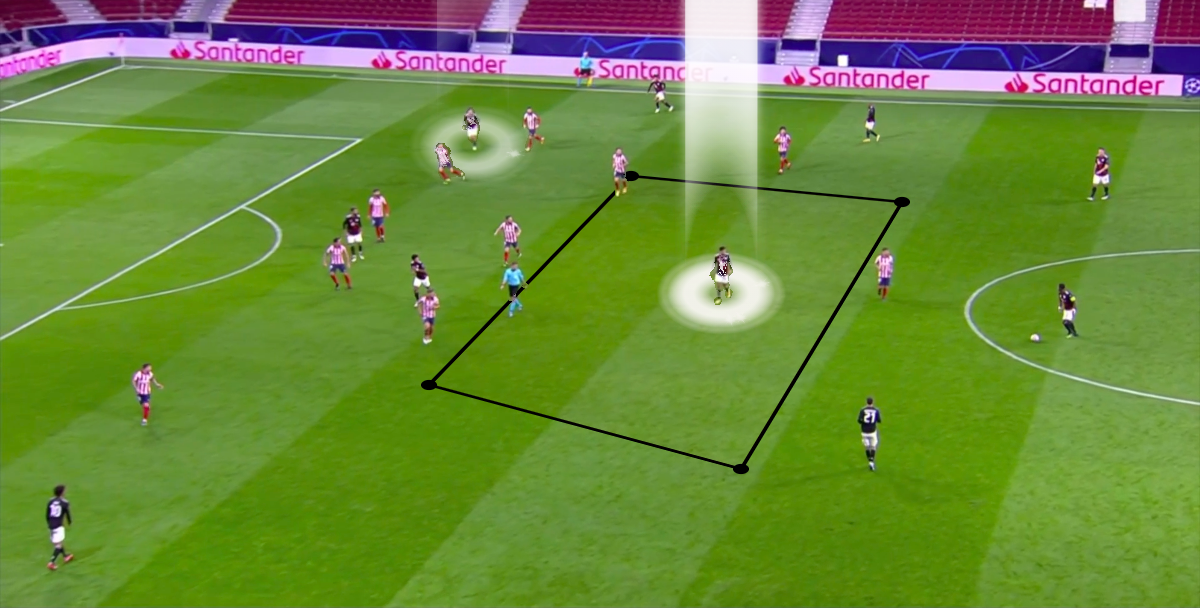 Bayern Munich’s average positions during the game show a clear plan of trying to create overloads in the midfield and final thirds. 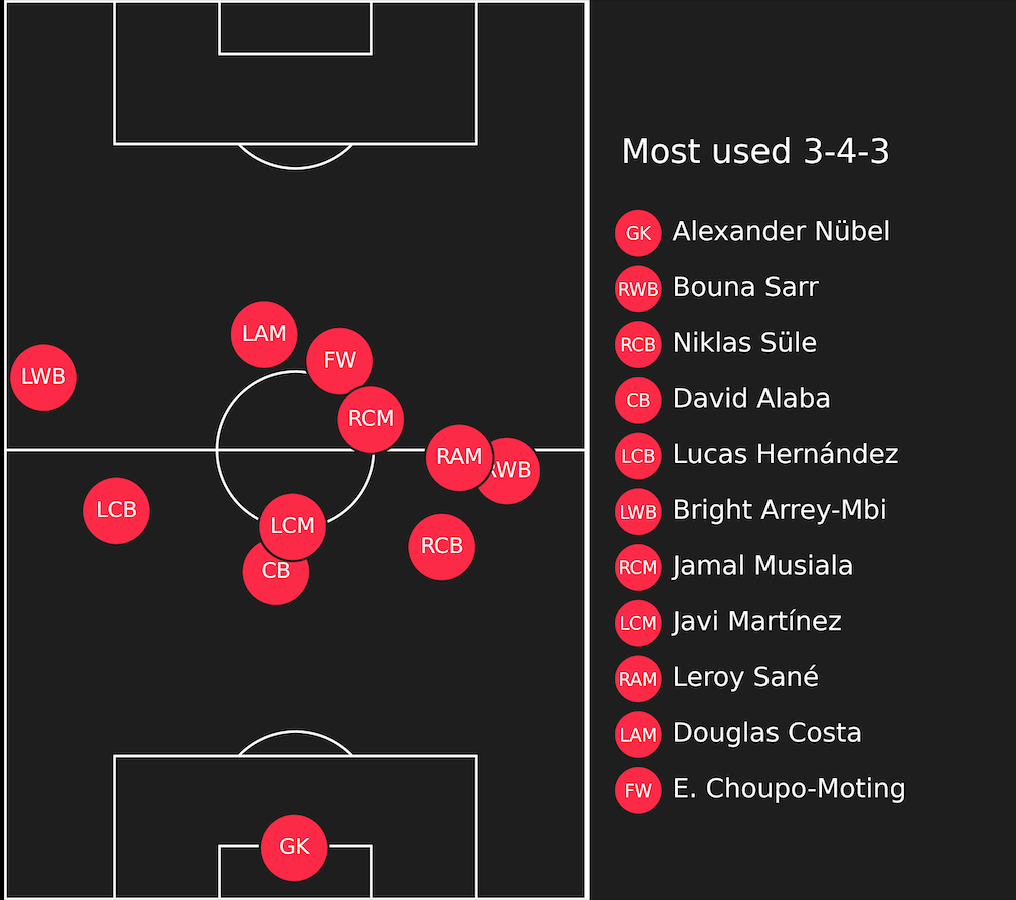 Bayern Munich Out of Possession

When out of possession, Bayern operated in a commonly seen system, aiming to press high up the pitch to stop the hosts from playing through the thirds. Similarly to Atlético Madrid, Bayern aimed to stop passes into the central portion of the pitch, aiming to instead, force the play wider to use the touchline as another defender, and with Simeone’s side having a decent portion of possession, the above graphic can also testify to Bayern pressing in wider areas. 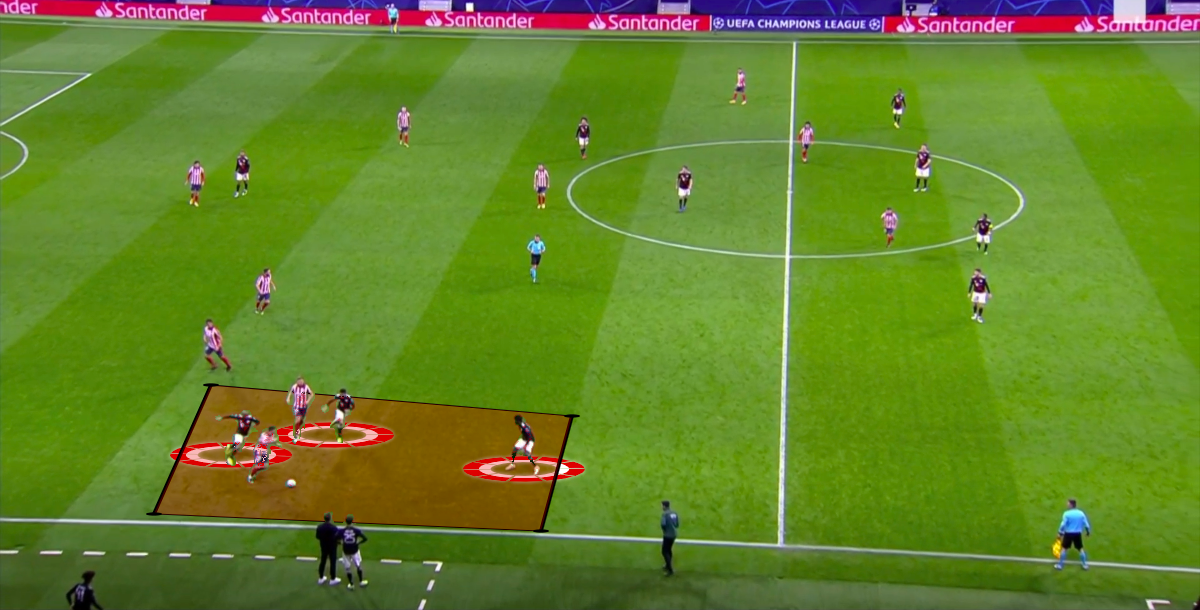 When either Stefan Savić or José Giménez had the ball in their defensive third, Bayern were extremely compact vertically, nullifying the space in the middle portion of the pitch and limiting the creative potential of the midfield pairing, as well as Félix who often drifted deeper.

With this, Bayern left a lot of space behind the back line, however with Félix dropping deeper, Atleti did not have a great deal of pace for balls in behind with Correa often being the furthest player forward. In addition to this, Félix’s technical ability would not have been suited to playing more direct into the channels.

Even if Atleti found pace in behind the Bayern back line, the power and pace of Alaba would have put him in contention of dealing with the danger effectively. The below photo demonstrates Bayern Munich’s desire to remain vertically compact, limiting the space between the lines. 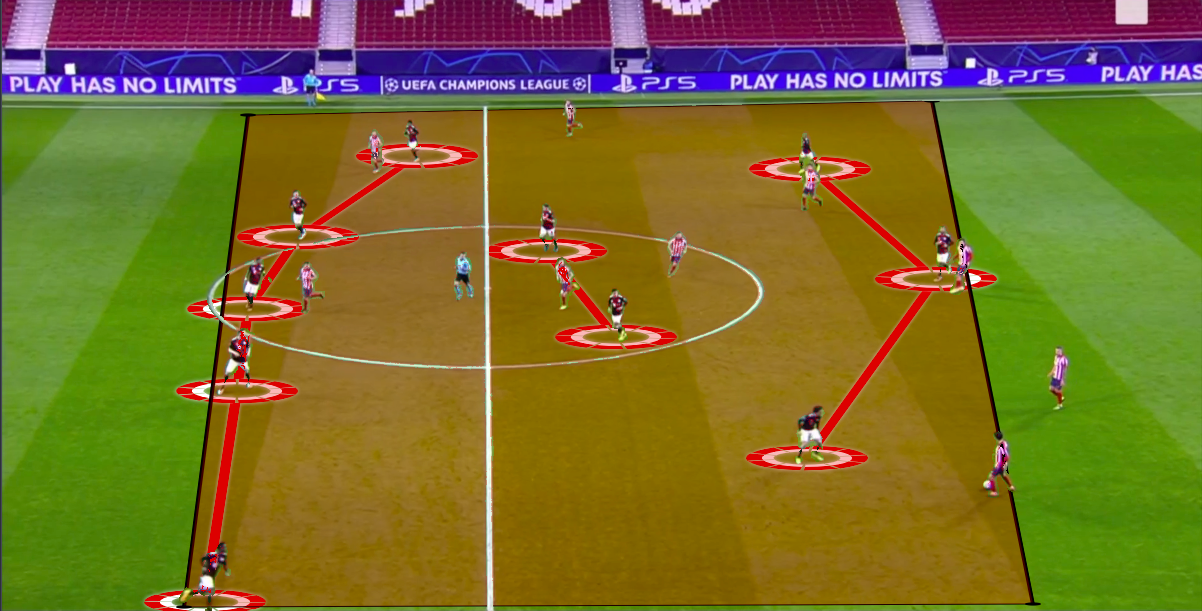 Atlético Madrid Out of Possession

As so often is the case, Atlético Madrid were resolute and well organised out of possession. Simeone’s traditional 4-4-2 mid-to-low block presented Bayern with troubles when aiming to penetrate.

Throughout the game, because of their deep compactness, the likes of Sané and Costa struggled to come alive during the game, given the fact that there was little space to run into. The photo below demonstrates the out-of-possession formation and mid-to-low block adopted by Simeone’s side. 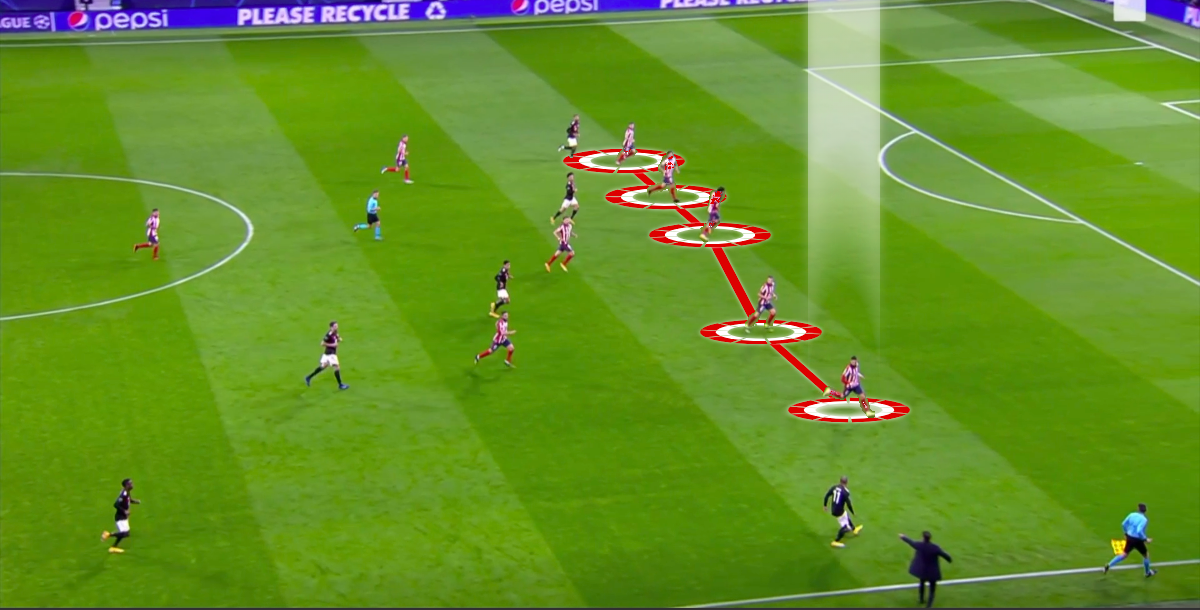 A common factor when Atlético employ a defensive block is that the wider players double up on the opposition wide player to make somewhat of a five-man back line. Despite this, the wider midfielder, in this case, Carrasco, is waiting to jump out of the back line when a pressing trigger is presented, with the aim of forcing play backwards. 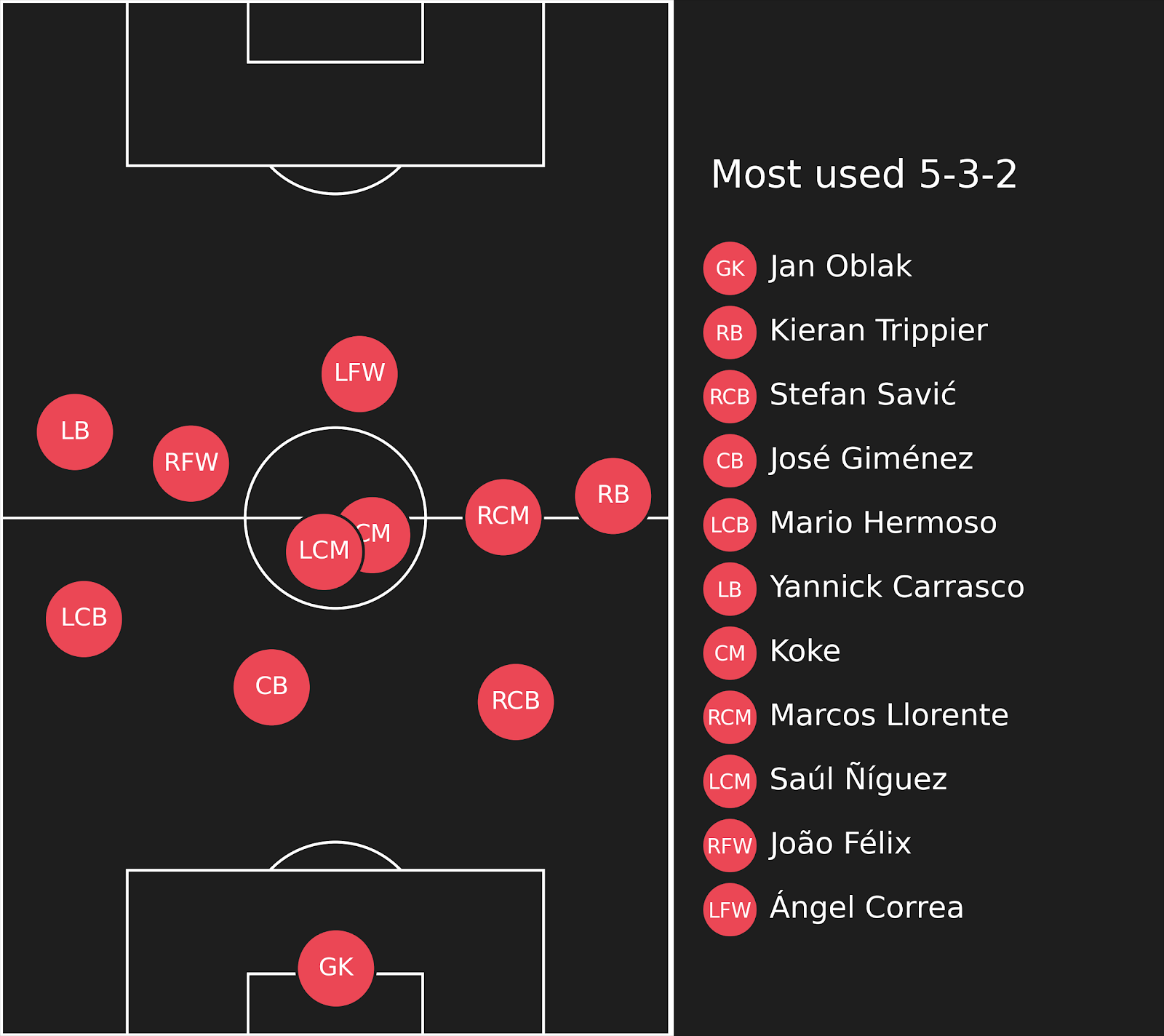 One characteristic of Simeone’s defensive organisation is his side’s ability to dictate the play when the opposition has the ball in their defensive and midfield thirds. The front two of Félix and Correa are well drilled to be able to dictate the play into wider areas where Atleti can then use the touchline as another defender. 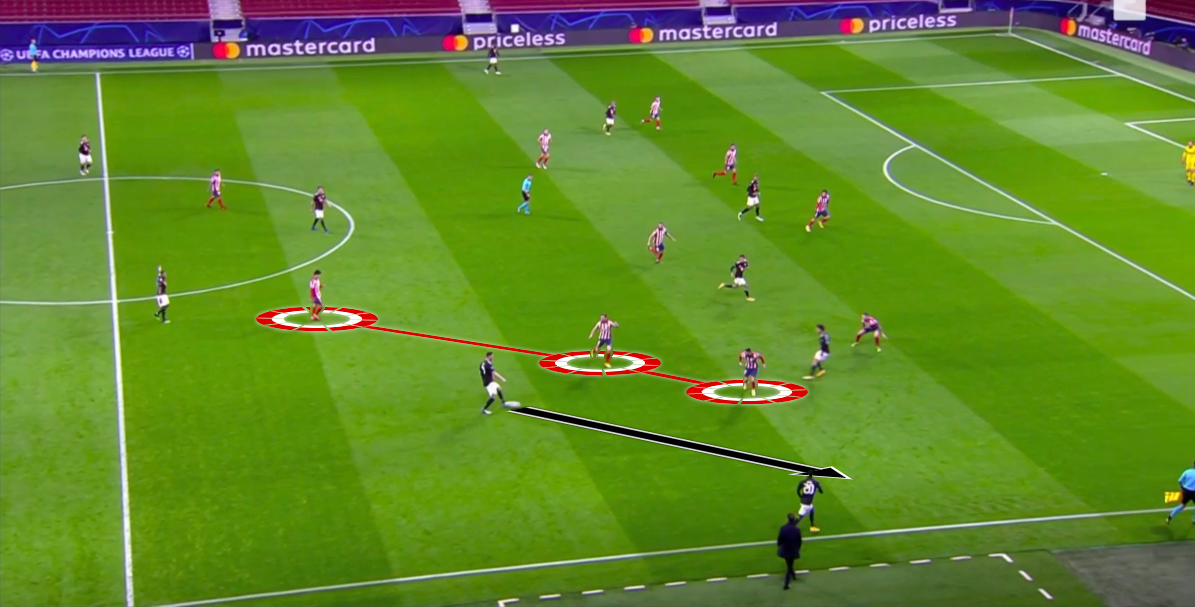 When Atlético built the play from their defensive third, they often shifted to more of an asymmetrical 4-2-3-1 / 4-4-1-1 formation, with a single pivot, usually Koke. Off the back of this, to try to play through the thirds, Félix often dropped into a deeper position in order to create a numerical advantage in the centre of the pitch.

When it came to trying to penetrate the Bayern defence, Atleti opted to try to penetrate in wide areas, often trying to catch the opposition wing-backs high up the pitch, leading to the outside centre-half being pushed into a wider area with space opening up for the two-pronged attack combo of Félix and Correa. The photo below demonstrates Atlético’s ploy to commit players into wide areas to try and make overloads to penetrate. 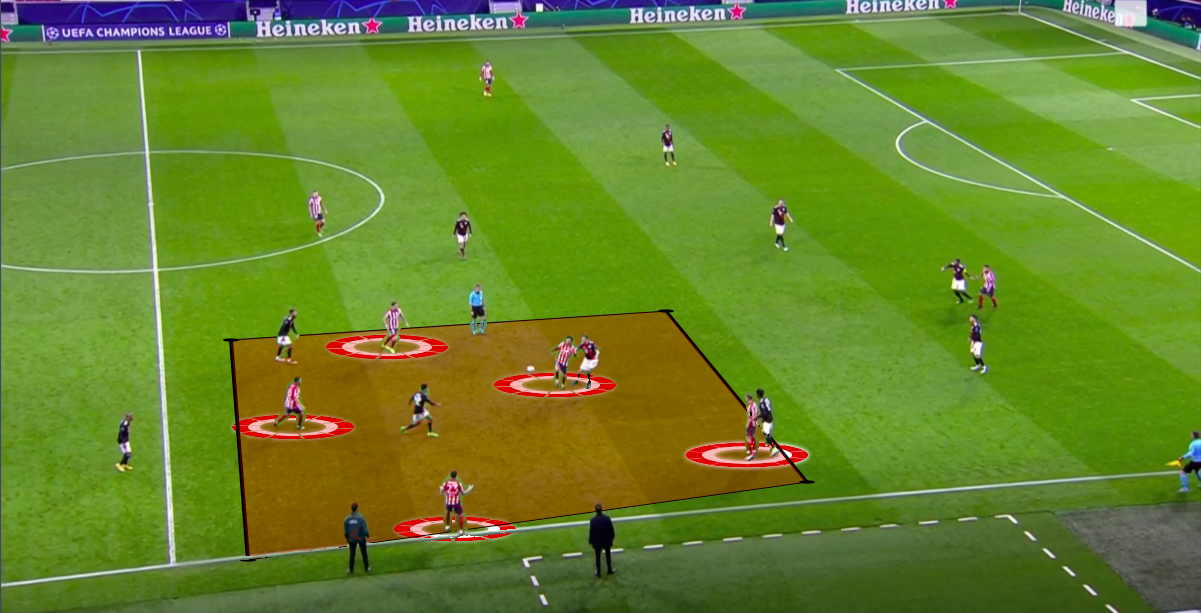 Atlético Madrid aimed to use the individual qualities of their wide players, in particular the crossing abilities of Kieran Trippier and Marcos Llorente down the right-hand side to create chances for the front two, which eventually led to Félix scoring from a cross from the right-hand side. The below graph shows the flank attacks of Atletico Madrid and their attacking organisation to try to exploit in wider areas. 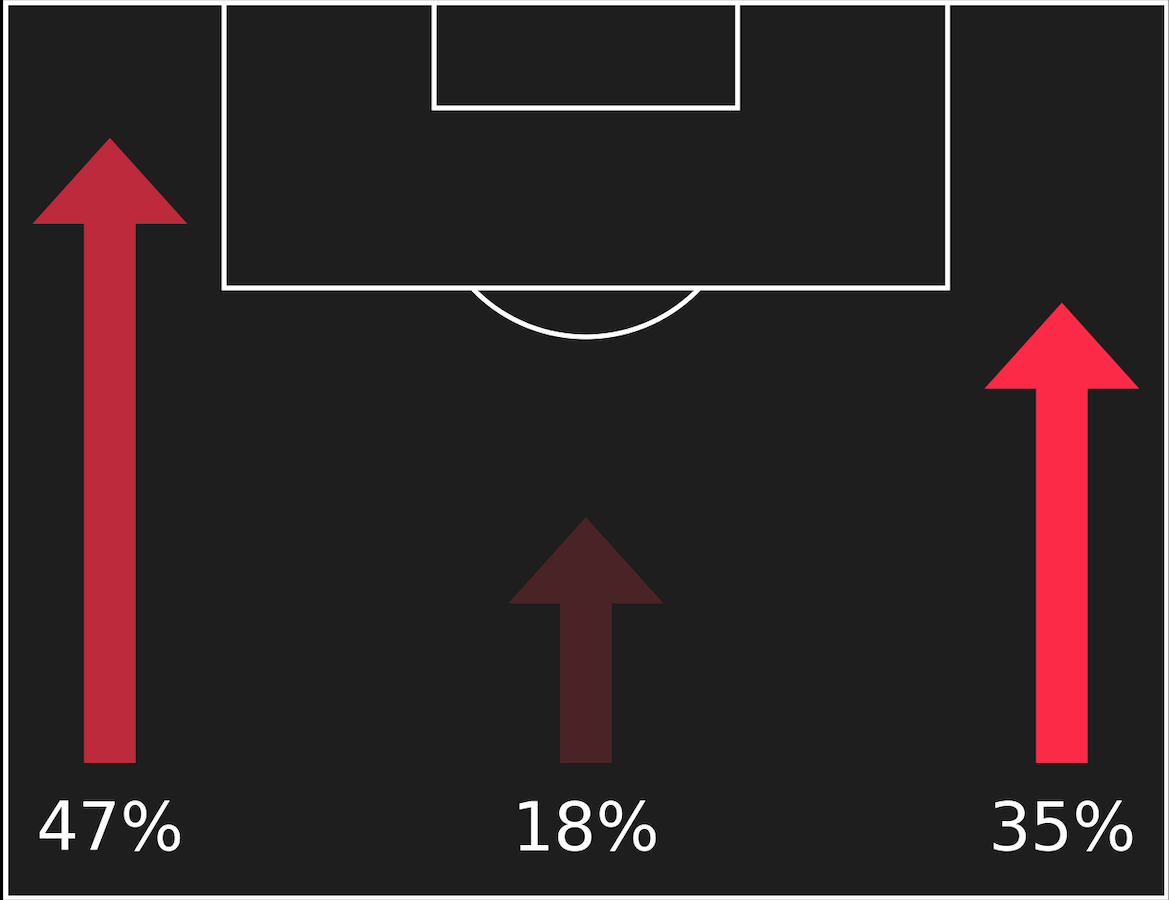 On balance, Atlético Madrid the better team on the night. Possession stats will show that the Bavarians dominated the play, yet, they did very little to trouble the home side’s goal, having to rely on a late penalty from Müller to salvage a draw.

Atleti’s staunch rearguard action has become a trademark since Simeone arrived at the club, and in recent times has shifted back to a more pragmatic style of play akin to the style when he arrived and what got them to the UEFA Champions League Final in 2014 and 2016 and what won them La Liga in the 2013-14 season.

Despite this, Bayern Munich did well to stay in the game throughout and when they brought on the powerhouse that is Müller they threatened more. The World Cup winner performed his iconic ‘Raumdeuter’ role on the night, and picked up spaces which troubled the Atletico Madrid low-block and won the Bavarians a penalty, and came away from the Spanish capital with a point in an intriguing tactical battle.

Whilst Bayern will remain atop Group A no matter what result they take against Lokomotiv Moscow next week, Atlético must either win or draw at the Red Bull Arena on Wednesday to seal progression to the knockout round. Defeat to Red Bull Salzburg would see Atlético eliminated in the group stage for the first time since 2017.

All telestrations made with KeyFrame Sports.