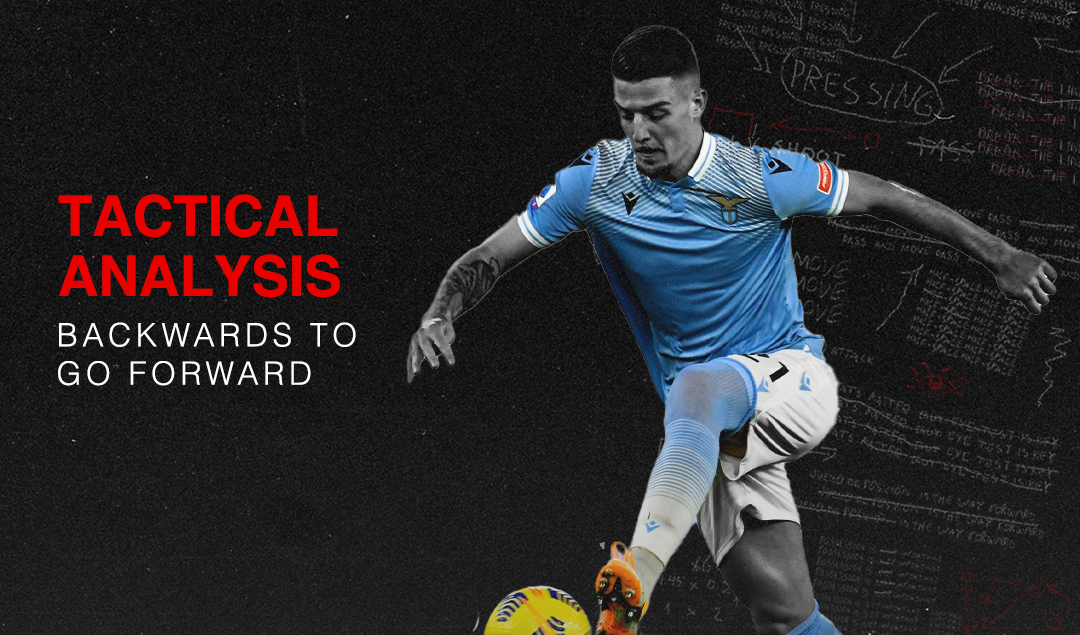 The concept of verticality is often mentioned positively when discussing teams’ style of play. Typically, this is in reference to progressive verticality which seems intuitive considering the end goal of reaching the optimal destination to score, generally deep in the opponent’s half, wherever that may be contextually. However, progression is not linear. Sometimes to reach the ultimate end of scoring a goal, adopting the means of going backwards is required to build a launching pad to move forwards.

Consequently, there are two forms of verticality: forwards and backwards. And they are often mutually reinforcing because they add additional depths which help stretch the pitch. Moving forward provided there are connections typically creates more space to move backward into, and as will be discussed in this article, moving backwards often creates the space for quick, vertical transitions.

Perhaps the most notable example of backwards to go forwards is the attacking pattern of “up-back and through” whereby a player, typically a physical forward with the capacity to hold himself up receives the ball with his back to goal and then plays the ball to the midfielder. This action must be quick because receiving with the back to goal allows for a compression opportunity as no new space is being introduced and the game is moving slowly.

Meanwhile, another player attempts a blindside run as the forward receiving possession with his back to goal carries the implication of a desire to attempt the pattern – this is often referred to as a third man run. Through holding up the ball and pinning himself, the forward draws the centre back which creates space for the pass into space to be threaded into by the midfielder.

The forward verticality was needed to draw the opponent forward while moving backwards provided the means for future-forward verticality which is positive as it moves you closer to the opponent’s goal and forces the defensive state of retreat which makes capitalising upon the new space easier. Another example of this can be seen in the most recent Derby della Capitale:

Felipe Caicedo receives and instantly plays the ball to Sergej Milinković-Savić which informs Manuel Lazzari’s blindside movement opening all the space in behind Roma’s defence, forcing them to retreat, meaning they are in a constant state of reaction to newly introduced space.

This transition was catalysed by a pass in between the lines to the forward and therefore space must have been created initially to allow it to happen, in addition to allowing the Serbian midfielder time to receive and find a pass. This can be created by adding depth to play as mentioned in the introduction. A fundamental element of doing this is the concept of press-baiting which seeks to draw the opponent into pressing to create space elsewhere. The objective is to move the opponent, moving the ball is just a means. An important means, nevertheless.

Moving the ball backwards is pertinent here because teams typically seek to remain compact because it limits the effective space opposing players have available to operate in, which increases the chances of a turnover within the specified regions as compactness allows for convergence through pressing traps, while additionally acting as a deterrent towards movement into those areas which allows the team out of possession a degree of control over where the opponent moves the ball.

However, the team in control of possession through playing deep in their own half can gain control of one of the crucial aspects an opponent has for limiting effective space which is offside. Through staggering positions in greater depths, and inviting pressure forward into their own half, the team in possession can limit the extent of the opponent’s compactness as the defenders must always remain at a minimum on or near the half-way line provided there is a forward player vertically stretching the pitch.

Reduced compactness consequently generates space in between the opponent’s line for progression which can act as a trigger towards transitional moments through exposing lines of defence as frequently, a player from the line behind must step out creating space to pass into, or to evade. Reduced vertical compactness serves to reduce the effectiveness of horizontal compactness as wide actors become more dangerous if they receive possession because they can more easily move the ball inwards due to the increased space for central passes in between the vertical’s lines. There is a symbiotic relationship between the two.

This can be seen before to Lazio’s “up-back and through”. Lazio initially recover the ball near Roma’s final third but rather than attempt to force the issue with a risky pass that Milinković-Savić plays the ball back to Lucas Leiva, who subsequently plays it back to Francesco Acerbi with the ball ultimately ending up at the feet of Pepe Reina.

This is reminiscent of Pep Guardiola’s 15 pass rule in principle. Guardiola’s belief at Barcelona was that approximately 15 passes were required for the team to structure an attack well or have the shape required to reasonably deal with transitions. As with all heuristics, there is room for error in contextual examples, however as it pertains to Lazio, they clearly feel more comfortable ‘re-setting’ attacks after high pressure compared with attempting to exploit the situation of spontaneity. They want to generate pre-mediated circumstances to provoke automatisms such as the up-back and through.

These moves require predictable moments to act as triggers to players, and building backwards is a means to achieve that because they can always establish control due to defences requiring more men back than the opponent meaning there will almost always be a free man, with the goalkeeper as the last line allowing a numerical superiority to typically be established to take control of proceedings should they opponent use a typical man-oriented pressing trigger of a back pass to attempt to prevent the team in possession from sustaining pressure. 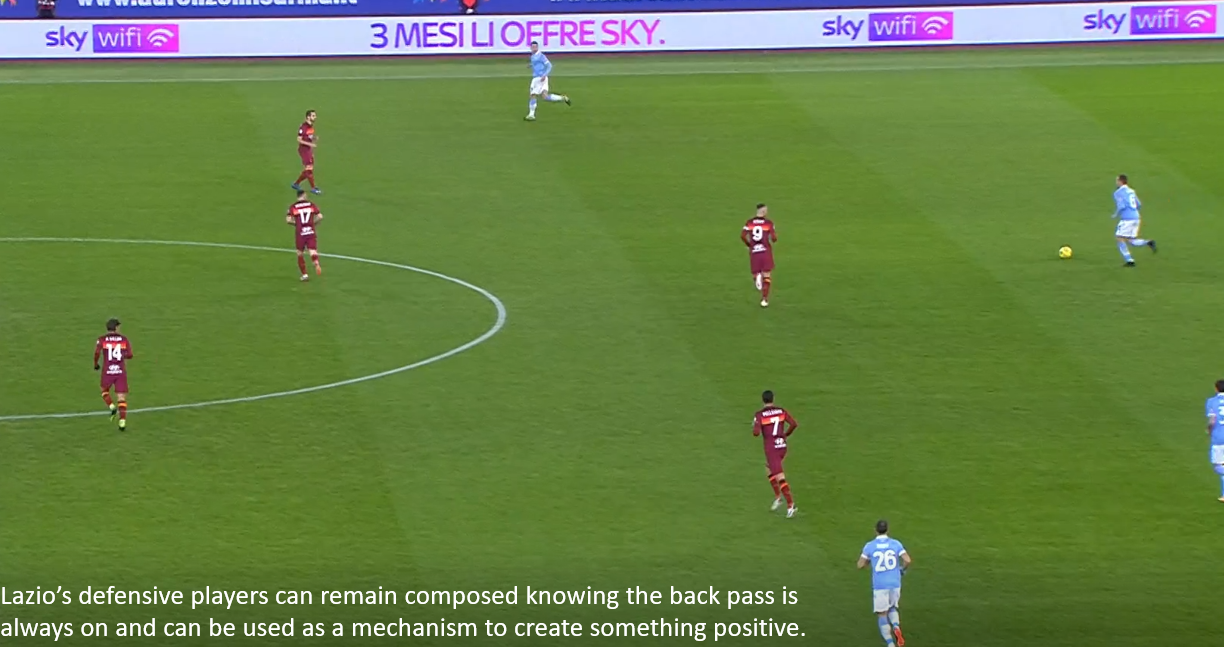 Lucas receives the ball from Reina and moves centrally while waiting to be pressured. Reina moves into the right half-space to open the angle for the diagonal to the left flank. That move then halts after a poor first touch in combination with the speed of the diagonal allowing time for interpretation and pressing which results in another back pass with the ball ultimately ending at Reina’s feet.

Afterwards, there is another pass forward and back. Reina then takes his time, which he is afforded because of the awkward route Edin Džeko is required to take to keep Acerbi in his cover shadow to prevent continued use of the free man to circulate which inadvertently creates the space required for Reina to break the offensive pressing line to find a deep dropping Ciro Immobile who subsequently finds Caicedo for the “up-back and through”.

As this example demonstrates, despite being in a deeper position than otherwise possible, the situation can still be more advantageous because of the potential for newly introduced space which makes it difficult for the opponent to remain compact. Changing the depths of play through vertical passing forces the opponent to reorient themselves and thereby potentially expose space they were otherwise protecting or how they protect space alters as they now need to cover more space rather than prioritising compactness.

This then creates a situation for an expedient forward vertical pass which can the break lines of the opponent’s defence, catalysing a transition. In essence, the territory is not always that important and forcing a negative pass is not always positive. Moreover, the conception that transitional moments are when possession is directly won is flawed as they only reference a type of transition that being a counterattack or counter-press.

Situations resembling that of a counterattack can be created through manipulation of the opponent’s position. The crucial element is the attacking of space quickly, which typically causes a defence to retreat. Although, as mentioned in my article on superiorities, deciding when the transition begins is difficult and by no means objective.