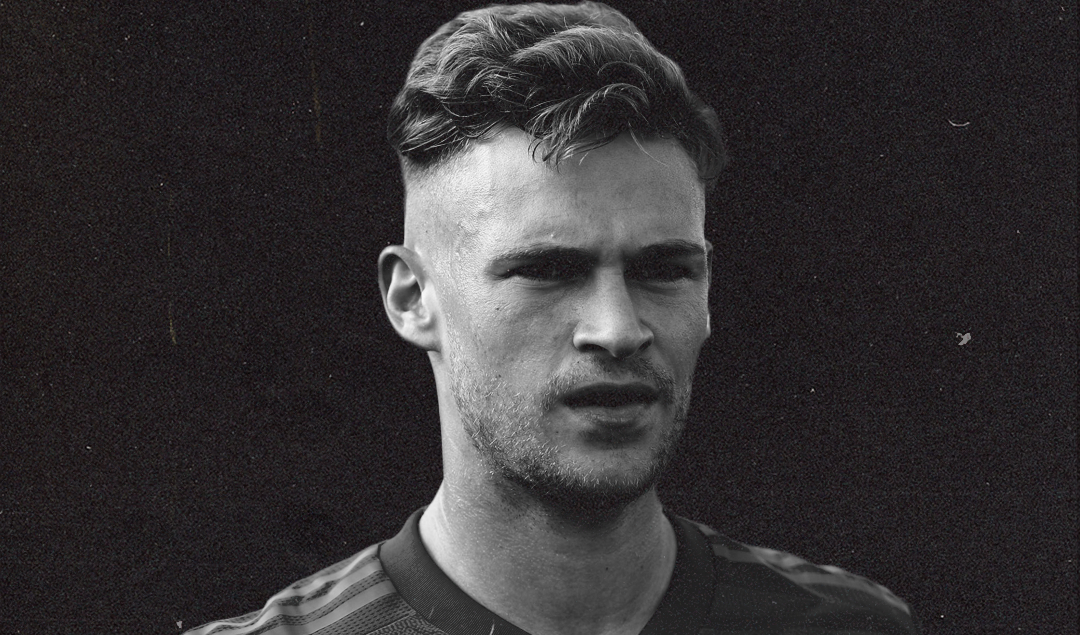 This was the most highly anticipated Der Klassiker in recent memory, with Dortmund having the opportunity to cut the gap on league leaders Bayern Munich to 1 point with a victory. The unprecedented  tension and circumstances surrounding the match itself added fuel to the fire, as football fans salivated over the first major match-up since the Bundesliga’s return this month. Many feared the game wouldn’t be the same without the fans, but the passion, intensity and tension surrounding the derby easily dispelled that belief.

Both teams lined up in their preferred formations with Bayern using a 4-2-3-1 and Dortmund a 3-4-3. There was a notable absentee from each line up, with both Thiago Alcântara and Jadon Sancho missing out of the starting XI of their respective teams and changing the dynamic of the game as a result.

Leon Goretzka took Thiago’s place meaning that Bayern missed the game-changing technical quality and pass volume that the Spaniard boasts, whereas Sancho’s exclusion was a little less damaging for the Black and Yellows, due to Thorgan Hazard’s similar strengths and attributes. 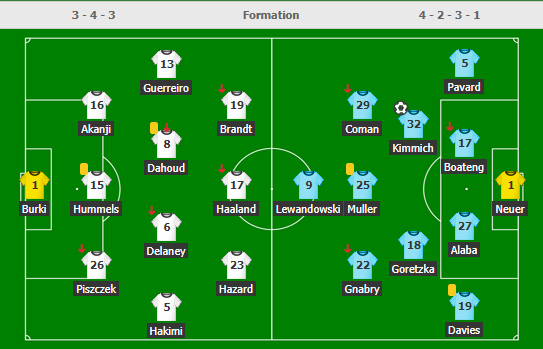 The main difference in the two teams was the amount of outlets on each side, players who profile as runners in behind, attackers of space, and who can carry the ball for large distances. Bayern had two outlets on the flanks in Kingsley Coman and Serge Gnabry whereas Dortmund only had one outlet in Erling Haaland. While not necessarily an outlet, Bayern striker Robert Lewandowski is skilled at linking play and holding up possession, which further increased Bayern’s ability to get up the pitch quickly.

The importance of outlets is evident to see in all great teams. Liverpool and Manchester City possess two outlets at all times and always have another on the bench; Liverpool with Mohamed Salah, Sadio Mané and Divock Origi, City with Raheem Sterling, Riyad Mahrez and Gabriel Jesus. Bayern also possess this luxury with Gnabry, Coman and Ivan Perišić.

What’s important to note is that these are also wide players which enable their teams to play with automatisms. An automatism is a predetermined pattern of play that the team uses to get themselves out of trouble against a high press. An example of an automatism with outlets is working the ball out wide to the fullback and hooking the ball down the line into space for your outlet to run onto. Liverpool are famed for this automatism with Trent Alexander-Arnold and Salah, using it to push the opposition back and progressing the ball up the pitch.

It seems crazy, but in reality, it makes total sense. With outlets running the channels, you have players stretching the pitch. This makes the distance between defence and attack wider, increasing the space available to play through while decreasing the distance of vertical compactness between the opposition’s players. In general, it allows technical players more time and space on the ball and stretches the opposition, thus making it easier for the team in possession to progress the ball. 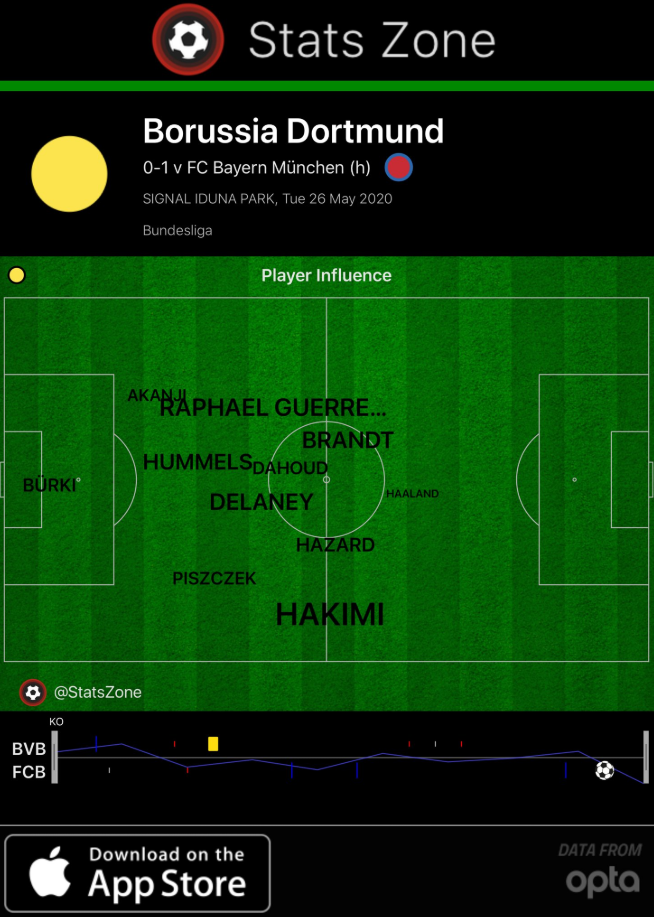 This is an average position map of the Dortmund players in the first half on Tuesday. As seen in the map, the majority of the play occurred in Dortmund’s half, which enabled Bayern to sustain pressure and ultimately, their quality in attack shone through. Shortly before halftime, Bayern scored after a spell of pressure on Dortmund’s defence, with Joshua Kimmich beating Roman Bürki with a wonderful chip.

Nevertheless, Dortmund did better than expected in the first half, especially with the likes of Sancho and Axel Witsel on the bench. To play under constant pressure with very few options further up the pitch requires incredible composure and technical quality. Many players would have crumbled in those circumstances, but they didn’t. Rather, mistakes are ultimately what cost them the game.

Dortmund were able to create chances at will once they got into Bayern’s final third, but it was too irregular an occurrence for them to score. Haaland’s individual profile and quality enabled him to get some transitional moments when utilising his pace and power, but ultimately it wasn’t enough.

Alternatively, when Bayern were pressed, they were able to evade the press with greater ease despite not having the luxury of quality build-up dynamics or balance. Goretzka often hides from passing in the build-up phase, particularly against a high press, because he’s not accustomed to making passes in those areas. He’s a raumdeuter (a space invader) and not a passing metronome a la Alcântara.

Bayern also only played with two central defenders as opposed to three, so they had no numerical advantage from either their defenders or midfielders (because Goretzka isn’t a natural passer). Because of that, they lost the ball in the build-up phase on occasion, but because of their outlets, they were still able to progress play via a long ball.

Here they are being pressed: 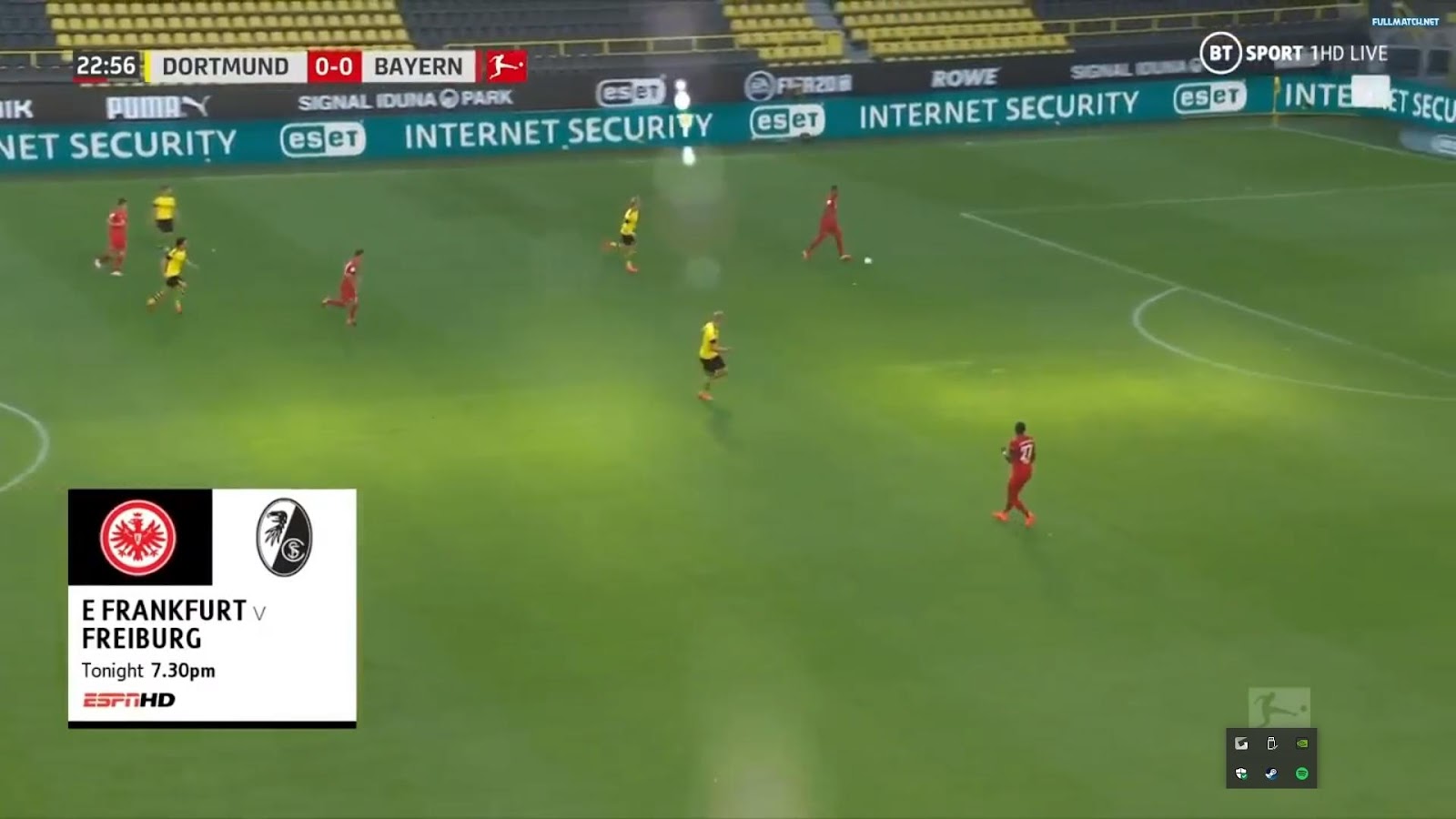 Here they are 16 seconds later after playing a long ball forward from Manuel Neuer to Alphonso Davies, who ran forward to stretch the play. 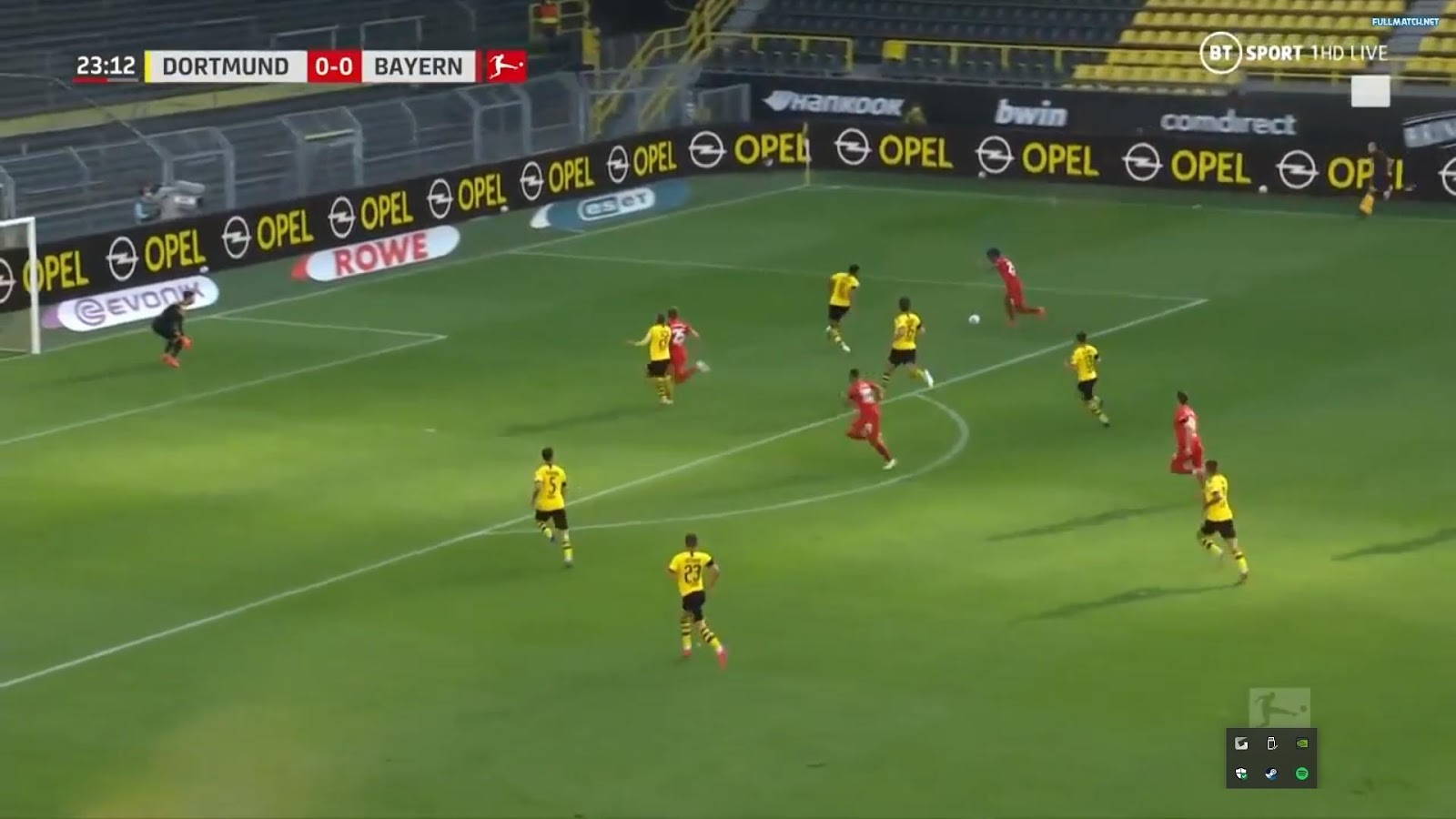 Dortmund created several chances via their pressing, but they struggled to pin Bayern back for the majority of the game. BVB were only able to sustain pressure late on in the game, when Bayern went into ‘hanging on’ mode. Lucien Favre’s side had the technical quality to sustain attacks over the final, but due to Haaland’s injury, they lacked penetration in attack and never managed to find an equalizer.

This was well and truly a game of percentages. Both teams had methods of scoring and ways of exploiting the opposition’s weaknesses, but some were more likely than others. Nevertheless, despite their flaws, Bayern had more ways to create chances than Dortmund, and they won a vital clash that put them in the driving seat for their 8th straight league title.