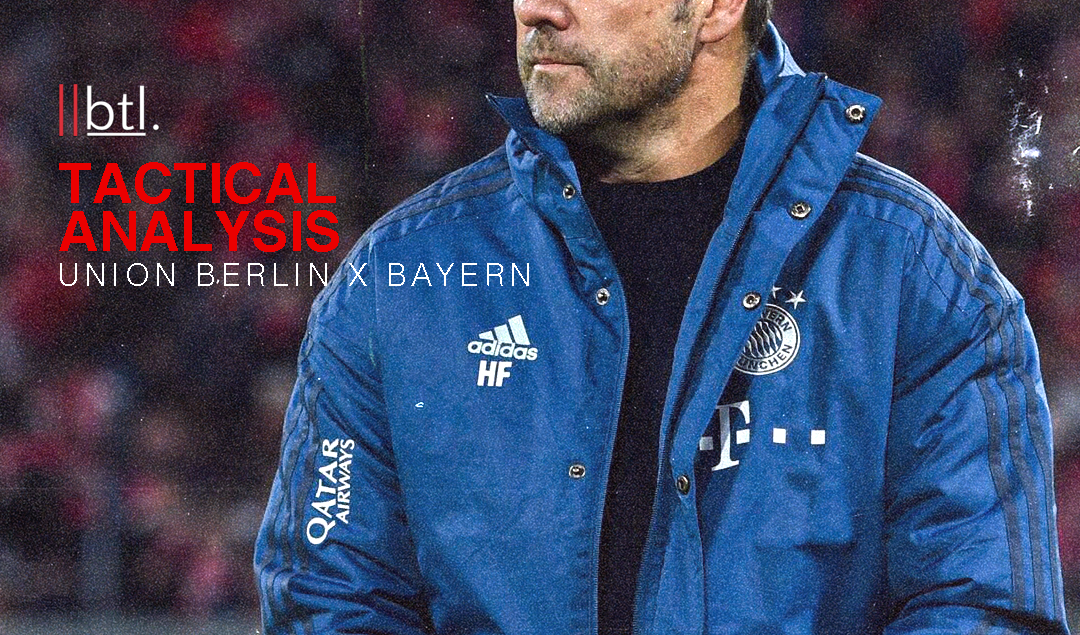 After a two month-long break due to the COVID-19 outbreak, the Bundesliga has finally returned. On Saturday, Dortmund defeated Schalke 4-0 to go within one point off Bayern Munich in second place. On Sunday, Union Berlin welcomed Bayern Munich for Matchday 26. Bayern had to win to maintain their four-point lead with eight league games left. Despite a great effort from Union Berlin players, Bayern still came out on top with a 2-0 win.

While Bayern adopted their usual 4-2-3-1 formation with a little tweak as Thomas Müller was played on the right wing, Union played their favored 5-4-1 system without their top goalscorer, Sebastian Andersson.

As seen below, Serge Gnabry played on the left wing of the attack, with Leon Goretzka playing behind Robert Lewandowski. Despite a poor first half, Goretzka still managed to save his game by suffering a foul in Union’s box, which resulted in a penalty for the away side.

Union played the majority of the game deep in their own half, as highlighted by their 32% possession. They were forced to concede possession and tried to sustain pressure as much as they could. We will now focus on how both teams approached this game, and we’ll start by talking about Bayern’s positional play.

Since Hansi Flick was appointed as Bayern manager, he has implemented a 4-2-3-1 with a positional play that gives the offense a set of guidelines to play within a structured scheme. The playing field is divided into specific zones and two teammates can’t be in the same zone at the same time, in order to help the ball progress further forward.

The picture below highlights how it is applied during the game.

Every Bayern player is as far from each other as they possibly can be, which helps provide multiple things. First, it allows time and space to the ball-carrier. Thanks to this precious time, Thiago, the ball-carrier, is able to make a more accurate forward pass.

This helps create space in the middle of the pitch for Bayern players to exploit, which also allows Bayern to stretch their opponent’s backline. On the left wing, Alphonso Davies bombs forward whilst Gnabry tucks inside in the half-space, evidence of the players’ positional awareness.

Finally, this positional awareness allows Bayern players to sustain pressure in their opponent’s half. Each player moves according to what his closest teammate will do, which helps Bayern’s ball progression while giving them a platform to attack in a more structured way.

Since Union are an inferior side to Bayern, they decided to adopt a more direct approach, with 65 of their 305 passes being long balls. In contrast, Bayern played 64 long balls out of 649 passes.

This direct approach allows Union to engage in more physical duels against their opponent, which could exhaust Bayern players, who can be more vulnerable on transitions. In addition, Union Berlin’s long ball strategy helps them progress the ball if they manage to win second balls.

Indeed, as depicted below, Union decided to position themselves high up the pitch on goal kicks. They launched long balls in the middle of the pitch, and when they won the ball back, they progressed the ball from 50 to 60 meters with only one pass.

Another strategy from Union Berlin was to put long balls over the top to exploit Bayern’s high line. Unfortunately for them, it didn’t work quite well. As shown in the picture below, Bayern defenders were intelligent enough to be aligned in order to catch the Union players offside.

They were caught offside six times during the whole game, and each of those six times were during the first half. As a result, they decided to alter their ineffective approach in the second half.

Another benefit of Bayern’s high line is their compactness. As Bayern players conglomerate close to one other, they can counter-press more efficiently when they lose the ball. This helps them to not be exposed defensively despite committing many players forward.

From an offensive point of view, as Bayern players pack close to one other, they can progress the ball by finding passing lanes with their closest teammates. All in all, Bayern decided to play a higher line than usual and it has proven to be a very effective strategy as it negated Union’s main pattern of play: their long balls.

Against Union Berlin, 75% of Bayern’s attacks came through the middle. In order to nullify this, Union Berlin closed down the space infield to control Bayern’s most dangerous area of play. They packed deep in their own half and controlled Bayern center-backs by not pressing them high. This is highlighted by their relatively high PPDA (Passes allowed per Defensive Actions) of 20.3, which proved that Bayern players still had enough freedom to make passes before losing the ball.

Here, Joshua Kimmich spots Goretzka in open space and finds him with his pass. While Union Berlin were often successful in limiting space in the midfield and intercepting passes, they also failed to close down space on several occasions, as shown below:

However, since Union played with a five-man defense, one of the defenders was able to apply pressure without leaving the defense exposed. Here, Union centre back Keven Schlotterbeck applies pressure and dispossesses Goretzka, allowing Berlin to recover the ball easily.

When pressing higher up the pitch, Union applied a man-marking scheme, which allowed them to close down space infield. By packing the center of the pitch, Urs Fischer’s men force Bayern to go outside on the wings, where they struggled to progress the ball as well as they would have in the middle.

If Bayern players were still able to find a centre-back with enough time to make a dangerous pass inside, a Union player would step out and press the ball receiver. This is shown below, with Kimmich receiving the ball and an opponent applying immediate pressure.

On rare occasions, Union Berlin struggled prevent passes in the middle of the pitch, as this caused several problems for them as they were unable to handle Bayern’s movements. This was most apparent on the left flank, with Davies and Gnabry combining to wreak havoc on Union’s right side.

Gnabry and Davies have built a great partnership on the left flank, and this chemistry did not dissipate despite a two-month-long break. Out of Davies’s 39 passes during the game, 13% of them were made to Gnabry. With the German winger tucking into the half-space, the Canadian had the entire flank for him to charge forward, as illustrated below:

By moving centrally to the half-space, Gnabry draws the right-sided back center back Florian Hübner out of position. In doing so, he opens a passing lane to Davies, who then makes the overlap in order to receive the ball from Bayern’s ball-carrier.

When Gnabry receives in the half-space, he is then able to make a turn and have a clear path on goal. As seen below, with Gnabry tucking in to create space on the left, Davies can now outrun his opponents, causing danger thanks to his pace and shrewd off-the-ball movement.

Davies is often praised for his strength and pace, but he has far more attributes in his locker. As highlighted below, he sees Gnabry receiving the ball on the left flank, but instead of pushing forward, which would jam two players in a short pocket of space and leave the defense exposed, he instead stays back, and waits to defend a potential counterattack.

Union Berlin started the game well, and they even created the first two chances of the fixture. However, they allowed Bayern to cut through their defensive structure by making stupid mistakes which ultimately cost them in the end. On the other hand, Bayern pressed well for the first 70 minutes and were able to sustain pressure in Union’s half. Their pressing fell off in the last 20 minutes, and Union were finally able to create two more chances, but it was a case of too little, too late.

Neither team played with the regular intensity for a Bundesliga game, but the standard will rise as players return to match rhythm. Despite not being at their best, Bayern continued their excellent form under Flick, and moved one step closer to clinching their eighth straight league title.