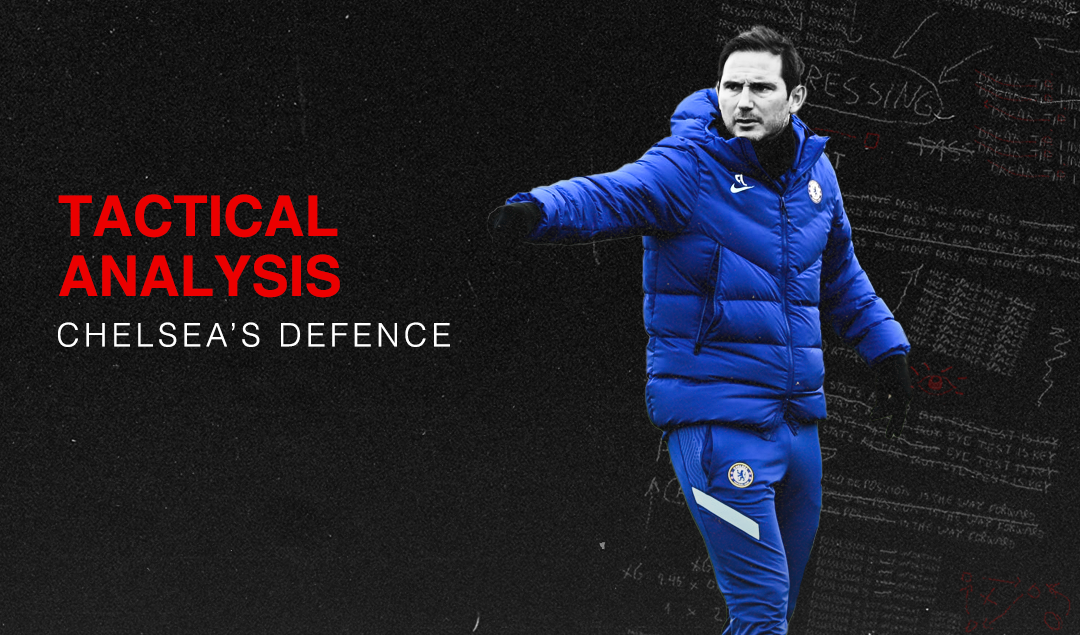 On January 25, Frank Lampard was sacked as Chelsea manager 18 months after being hired on a three-year contract; one day later, former Paris Saint-Germain manager Thomas Tuchel replaced him and took charge of the West London club on an 18-month contract. The abrupt dismissal comes after a torrid run of form for Chelsea, who had taken 7 points from a possible 24 and conceded 10 goals in 5 league matches at the time of Lampard’s sacking.

Since Lampard’s appointment in the summer of 2019, Chelsea have conceded 50 away goals in the league; only Newcastle have conceded more. The ex Derby manager has paid the price for a sloppy defensive structure, with the Blues falling to 10th place at the time of his firing. In this analysis, we’ll delve deep into why Chelsea continuously struggled at the back under Lampard’s brief tenure.

Lampard’s use of a high line within a 4-3-3 formation has led to problems in the defensive and middle thirds of the field due to the gaps between the players, both within the same line and between the different lines. Poor positioning and a lack of coverage with regard to the horizontal movement of defenders to reduce the amount of space that opponents can exploit has been a common feature throughout this season. 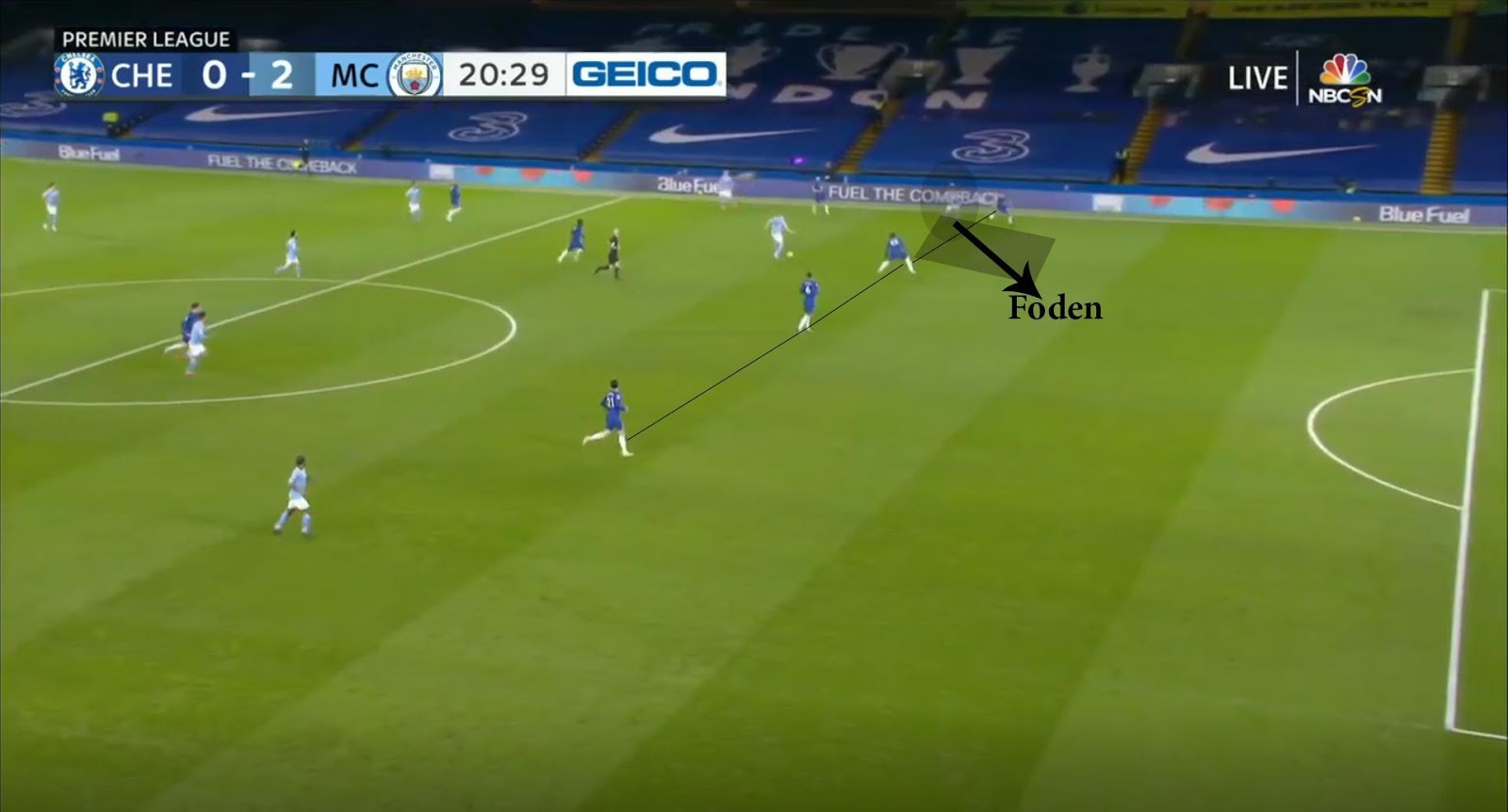 In the above image from the recent Chelsea vs Manchester City match, the home side has a high defensive line but little pressure on the ball carrier. As a result, Kevin De Bruyne has the opportunity to release Phil Foden into acres of space. Playing with a high line without the addition of midfielders closing down creative opponents of the calibre of De Bruyne is always a risky option. 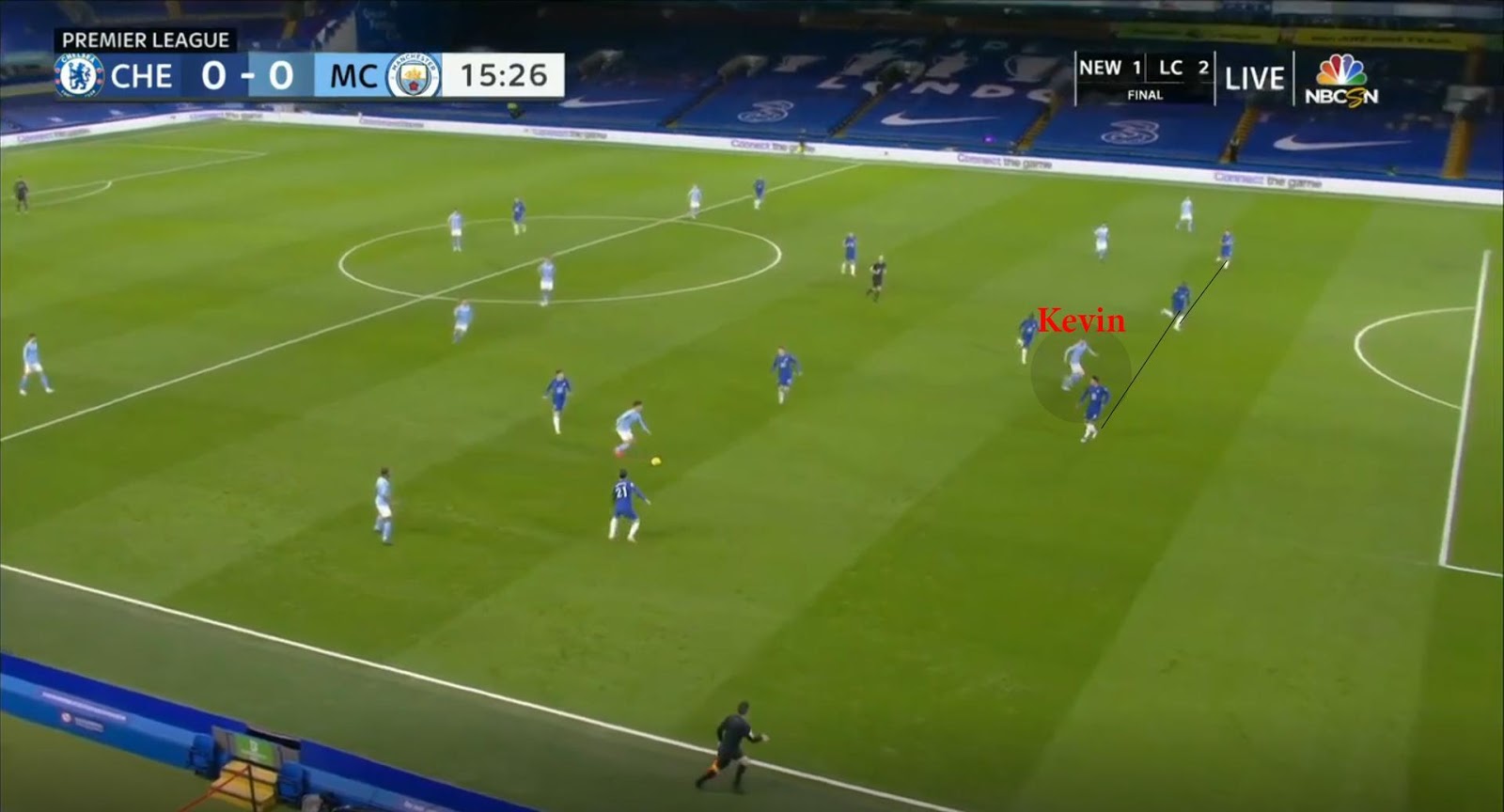 In the above scenario, De Bruyne is able to take advantage of the horizontal space between the Chelsea centre-backs and make a run on the blindside of Thiago Silva. 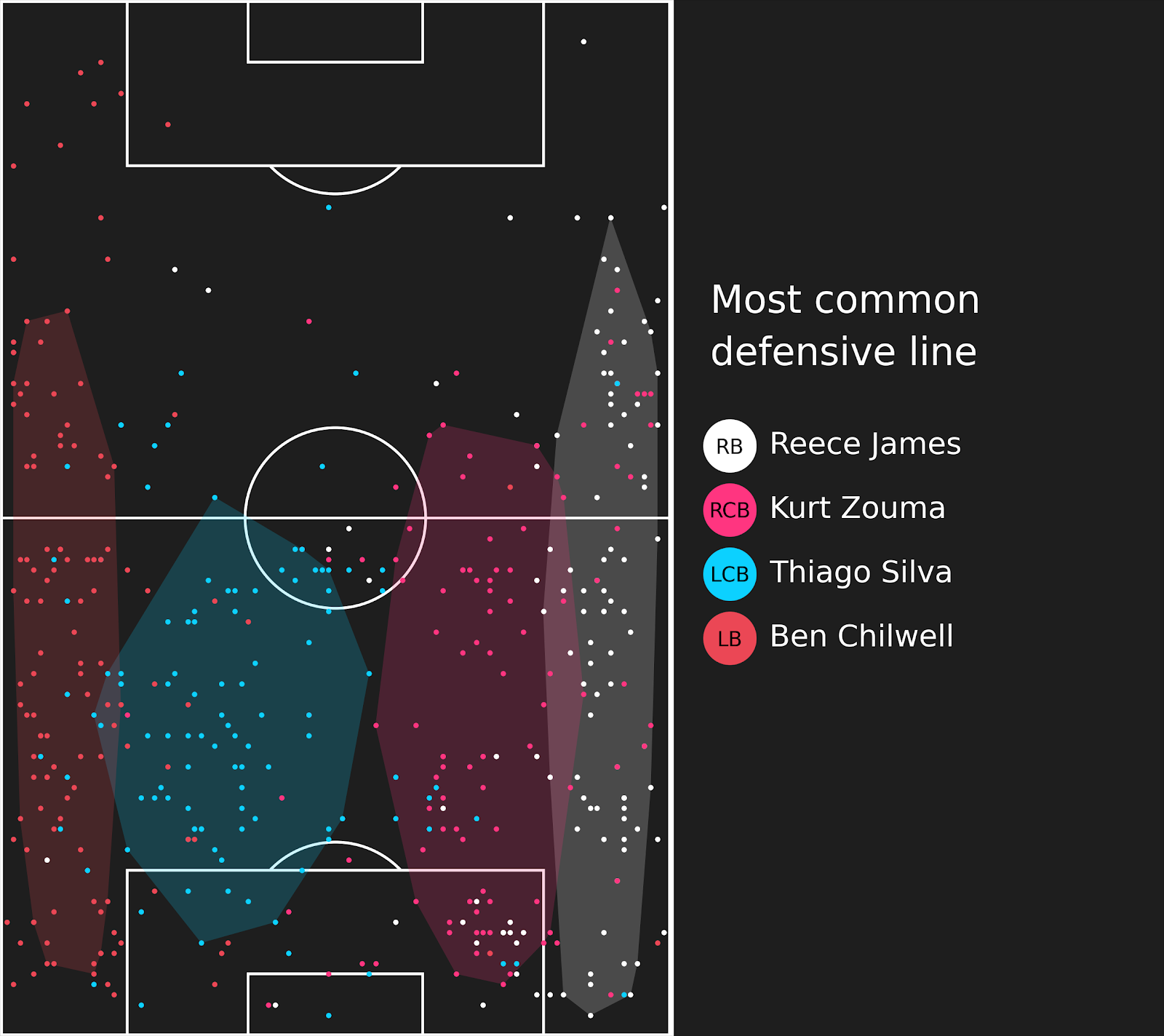 The above image shows the touch map and movement of the back four. With the defenders regularly pushing upfield, this must be accompanied by pressure from Lampard’s midfielders and attackers on City’s ball carriers. However, Chelsea weren’t always alert in such situations and often allowed their opponents too much time and space on the ball.

Compactness and convergence are important for teams using modern systems, both in and out of possession. When pressure is applied, the lines advance vertically to reduce space and prevent easy progression of the ball by the opponents. However, what happens to the Chelsea players in the middle and attacking third is problematic in terms of spread and convergence as they leave space behind them in addition to not advancing to pressure the opponent’s ball carrier. 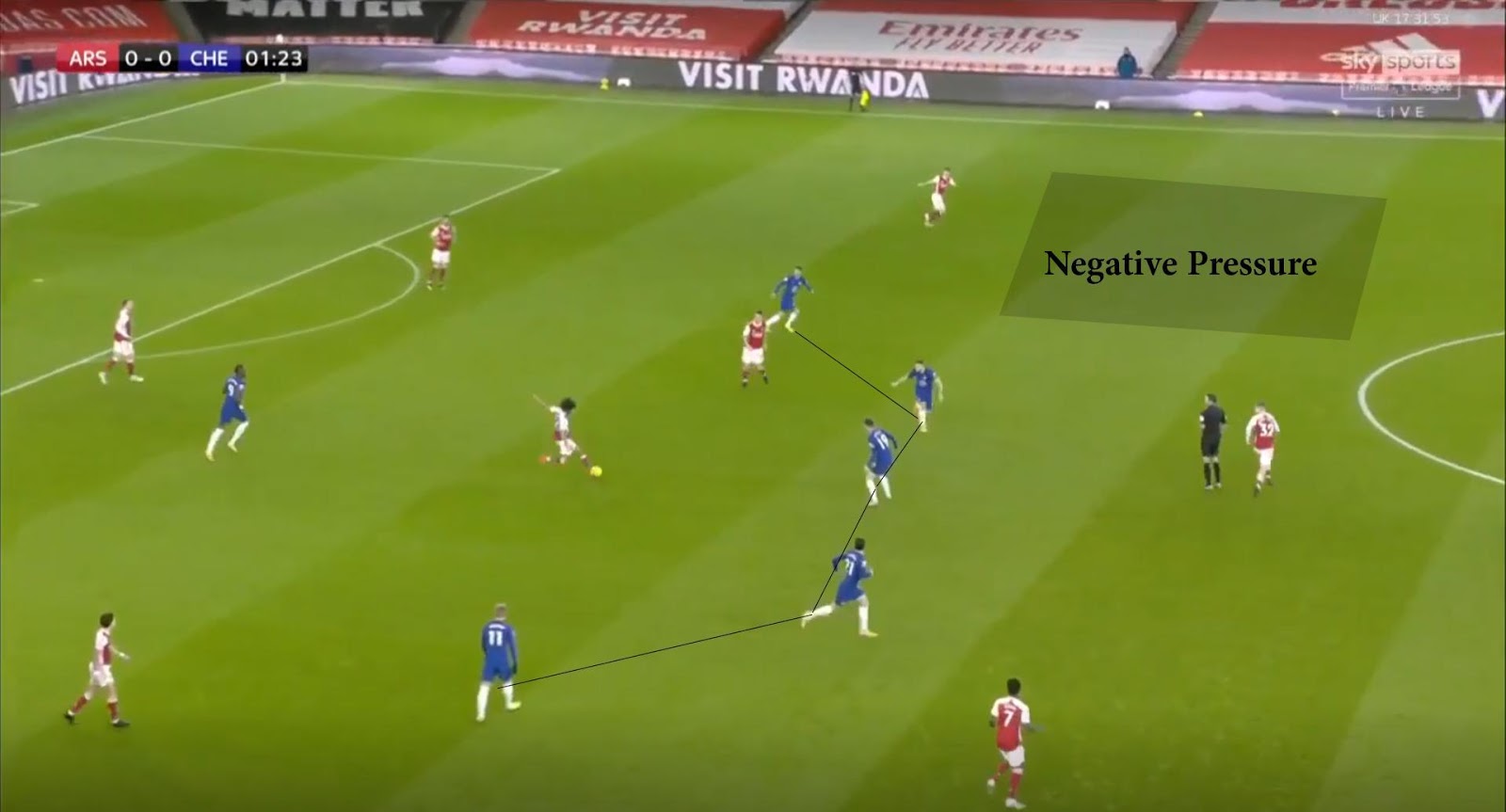 Here, at the start of the derby against Arsenal, Mohamed Elneny has time and space to distribute the ball diagonally to the left flank which is devoid of any Chelsea players. Instead, the Blues have formed a semi-hexagon near the ball but without applying pressure. 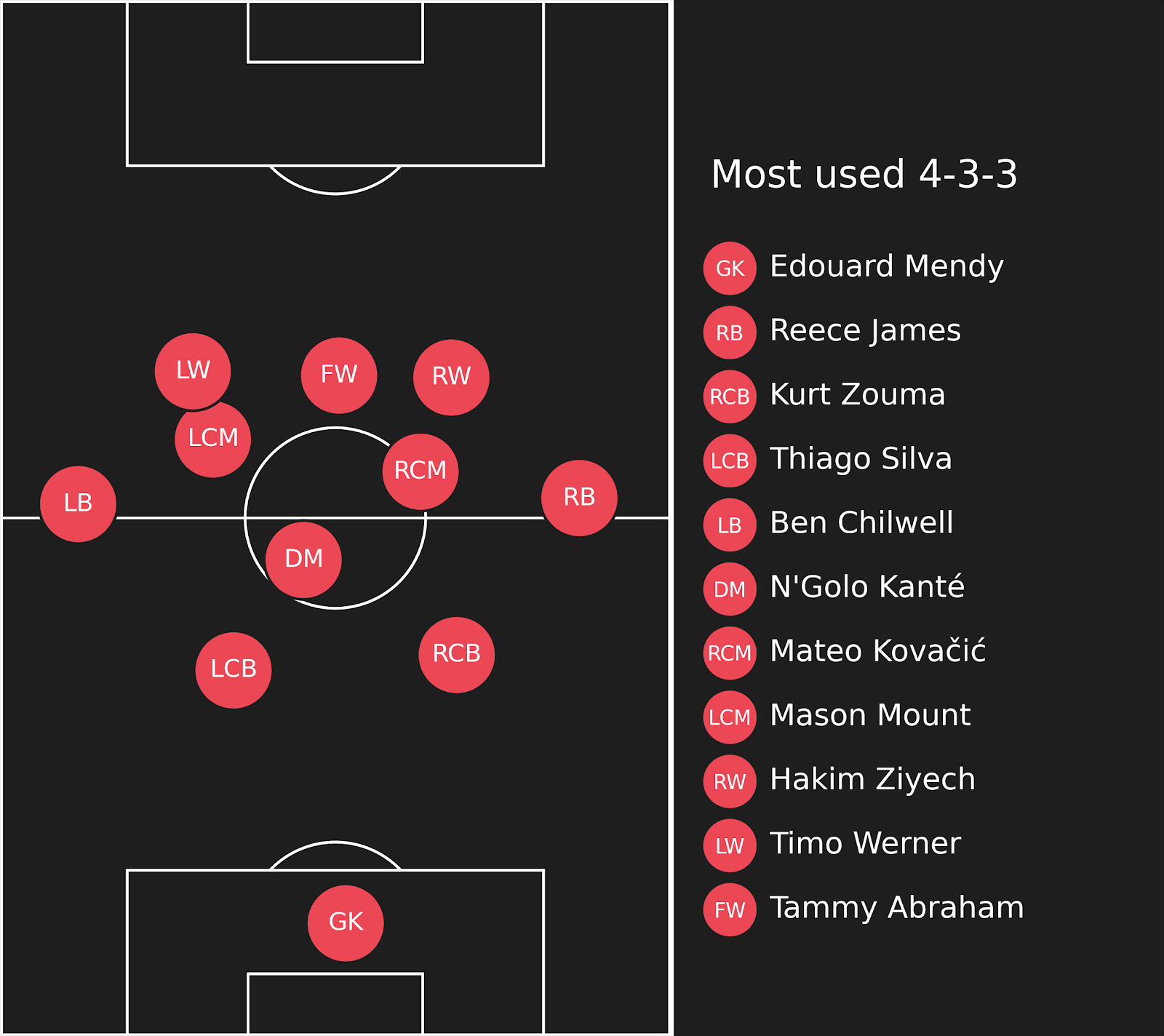 The above image shows the average positions of Lampard’s most-used team during the current Premier League season, which highlights how advanced the full-backs operate. In this set-up, Chelsea’s players need to be alert to reduce the distance between themselves both vertically and horizontally so as not to leave pockets of space that their opponents can exploit. 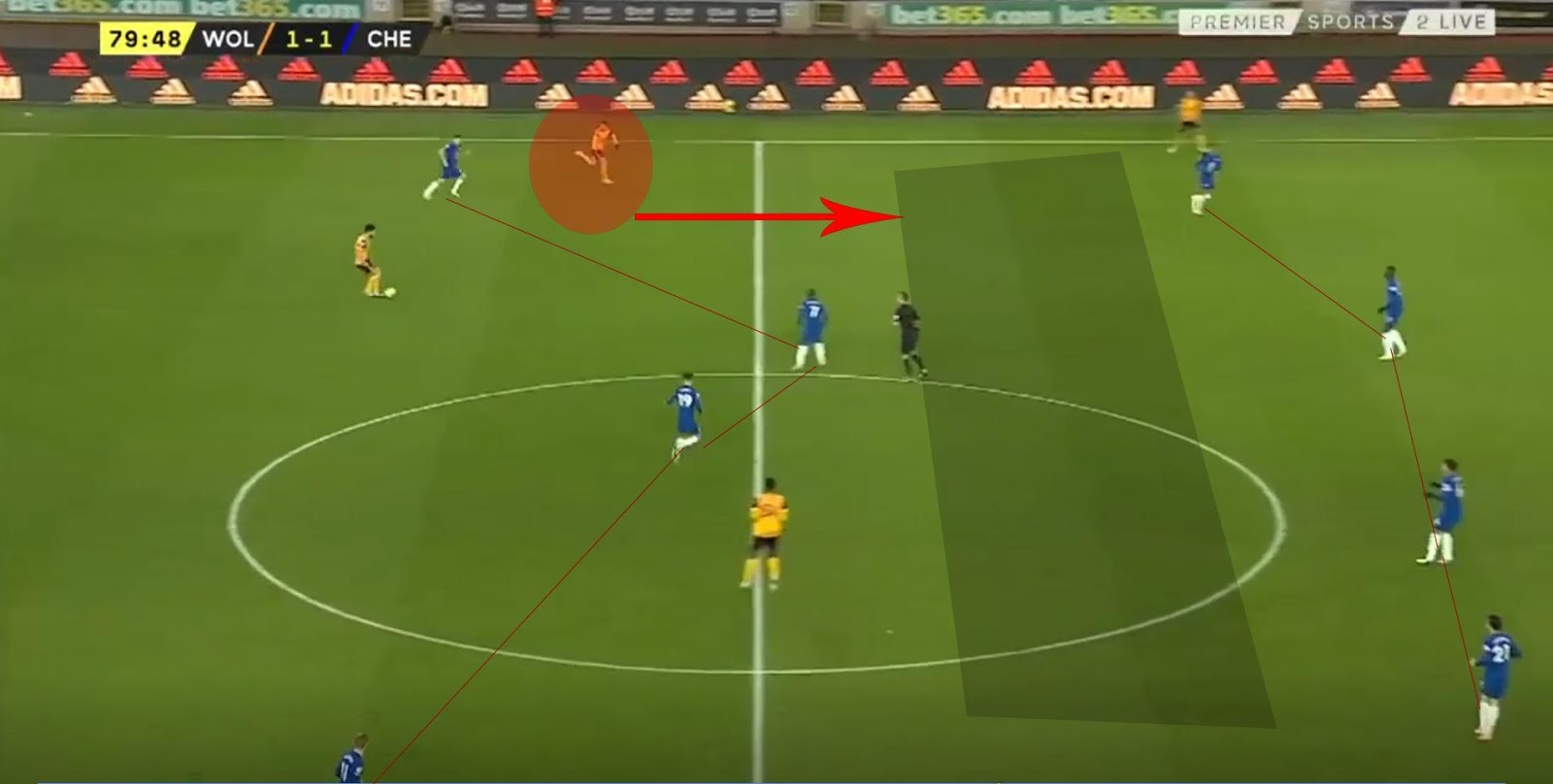 The above image further highlights Chelsea’s problem with regard to the space between the defensive line and the midfield. Here, space has appeared on Chelsea’s right flank which their opponents can take advantage of with a simple forward pass.

This results in two defensive problems for Chelsea (one collective, the other individual): a) the vacant space on their right flank can be exploited by their opponent by running directly at their back four and b) a dilemma for their right full-back: engage with the opposing player approaching on the flank or stay with the winger/wide forward?

When out of possession, teams should ensure that the opposition have few opportunities to take advantage of space in between the lines. Passing lanes should also be closed to reduce the ball carrier’s passing options. When N’Golo Kanté is absent, Chelsea are less effective at implementing these defensive systems. 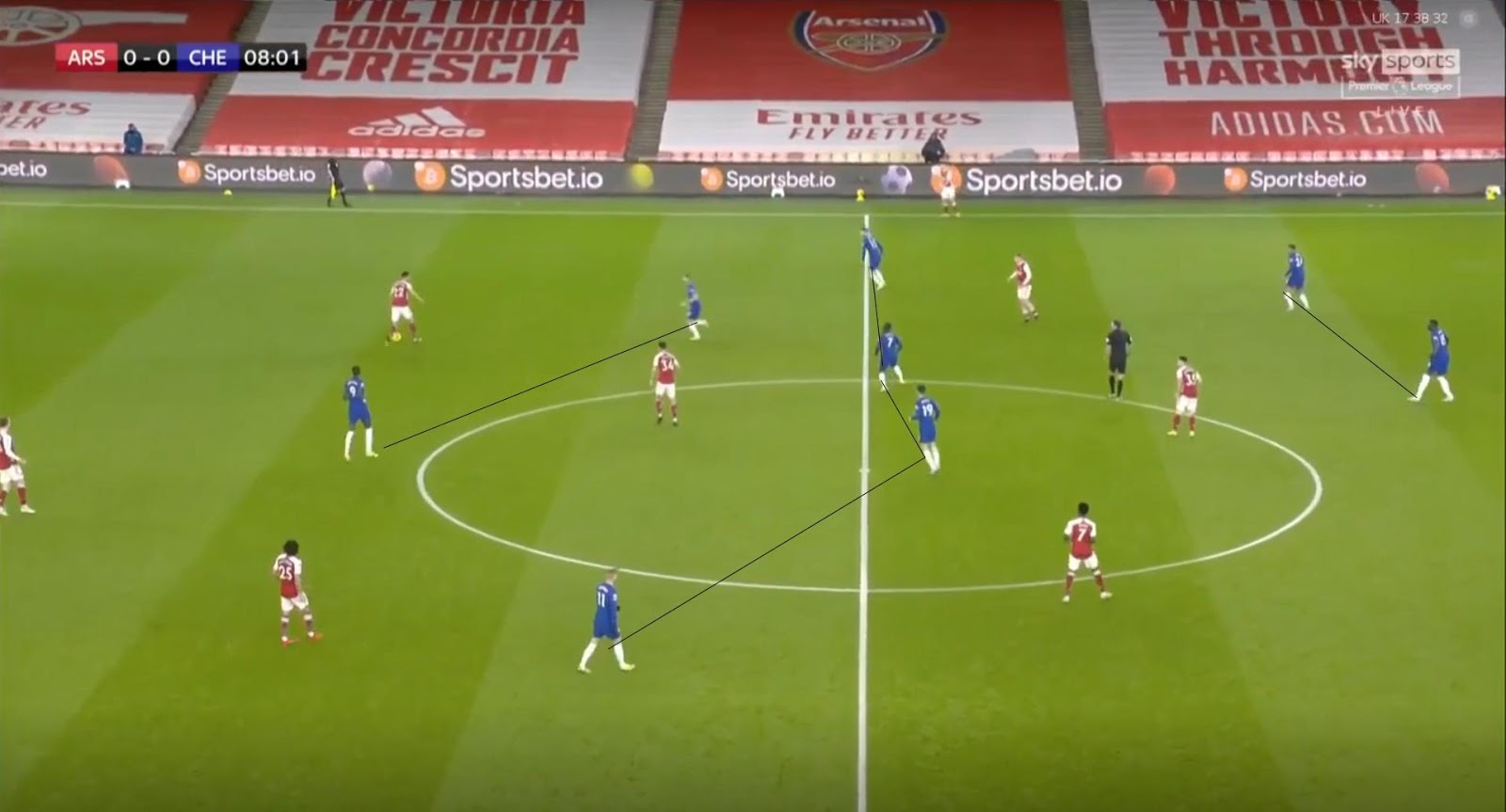 Here, the Chelsea players are positioned in such a manner as to restrict straightforward ball progression opportunities. But this type of set-up was the exception rather than the norm with players often lacking the discipline to remain in position. 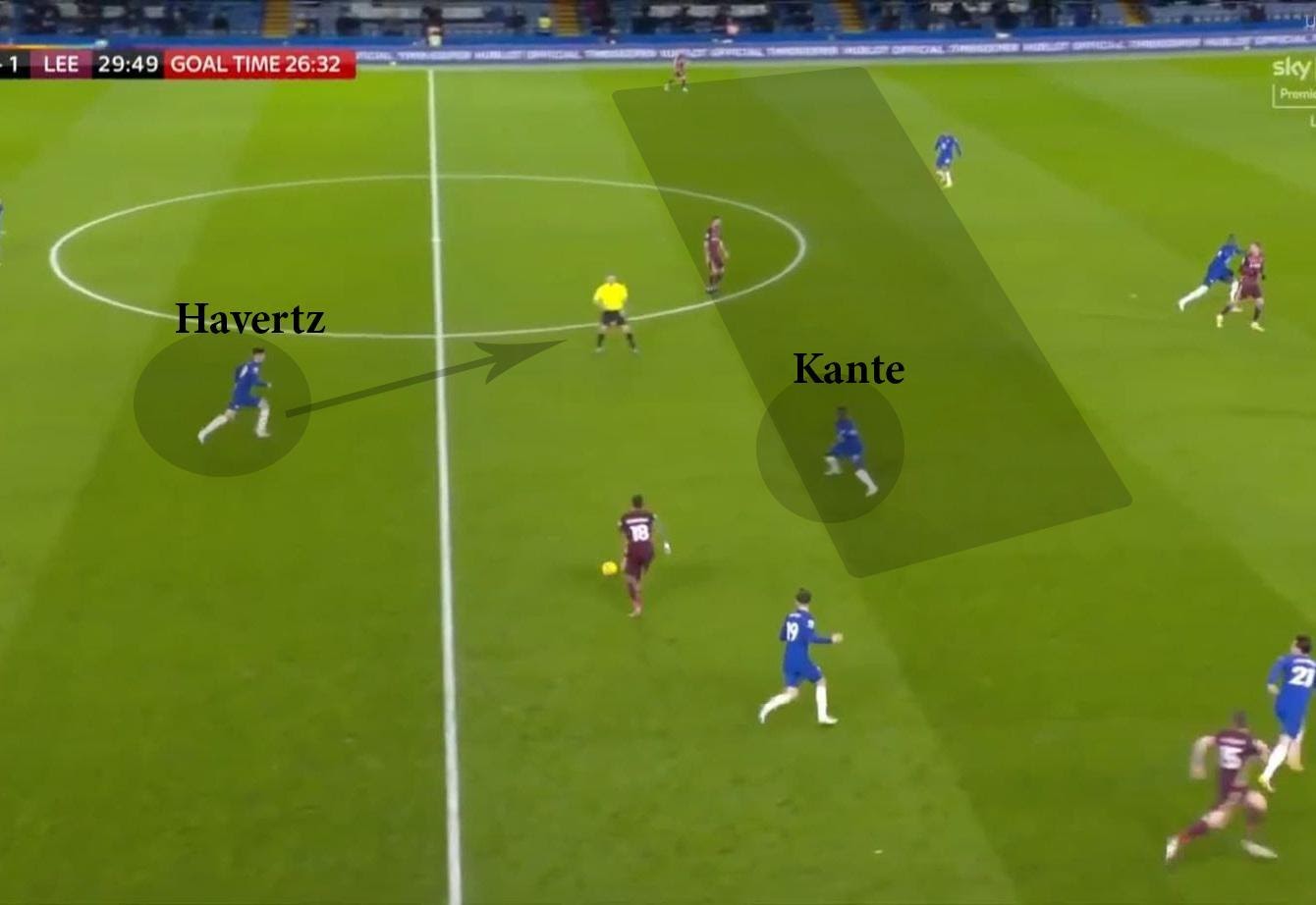 This issue was evident in the match against Leeds. Here, the visiting team looked to exploit the space behind Kanté by taking advantage of the failure of Mason Mount and Kai Havertz to track back.

When a team loses the ball on the flanks, it is vital that wingers/wide forwards track back to help their full-backs. On a number of occasions Hakim Ziyech, Timo Werner and Christian Pulisic have not offered the requisite assistance in such scenarios resulting in Chelsea’s full-backs being left in two vs one situations. 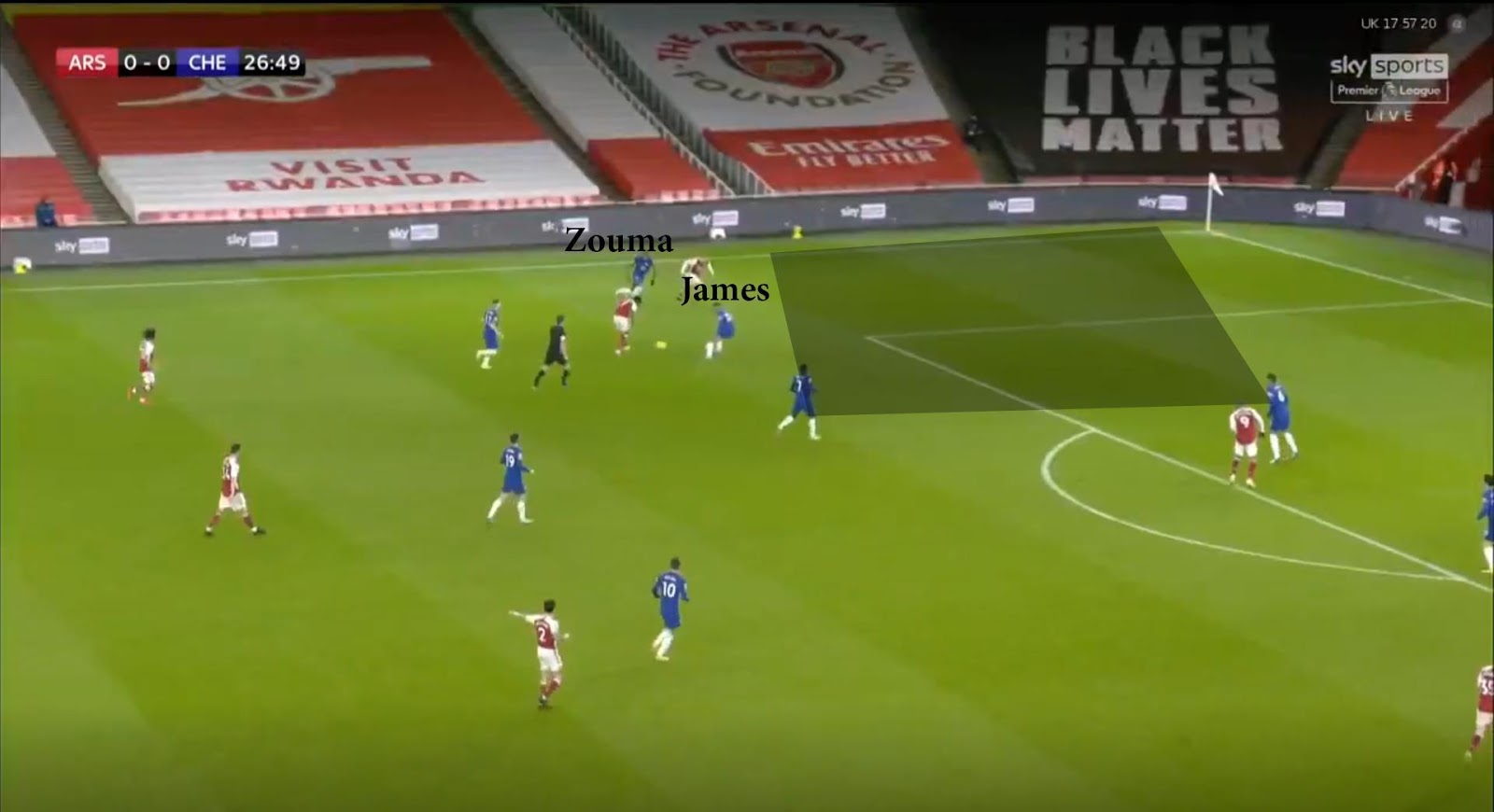 In the Arsenal match, such a predicament occurred on more than one occasion. In the above image, Bukayo Saka moves infield, taking Reece James with him and pulling Kurt Zouma out of position. With Pulisic failing to track runners, Emile Smith Rowe has plenty of space to receive the ball. While this issue has been prevalent in a number of Chelsea’s matches, it was especially costly in the derby confrontation with James often left exposed. 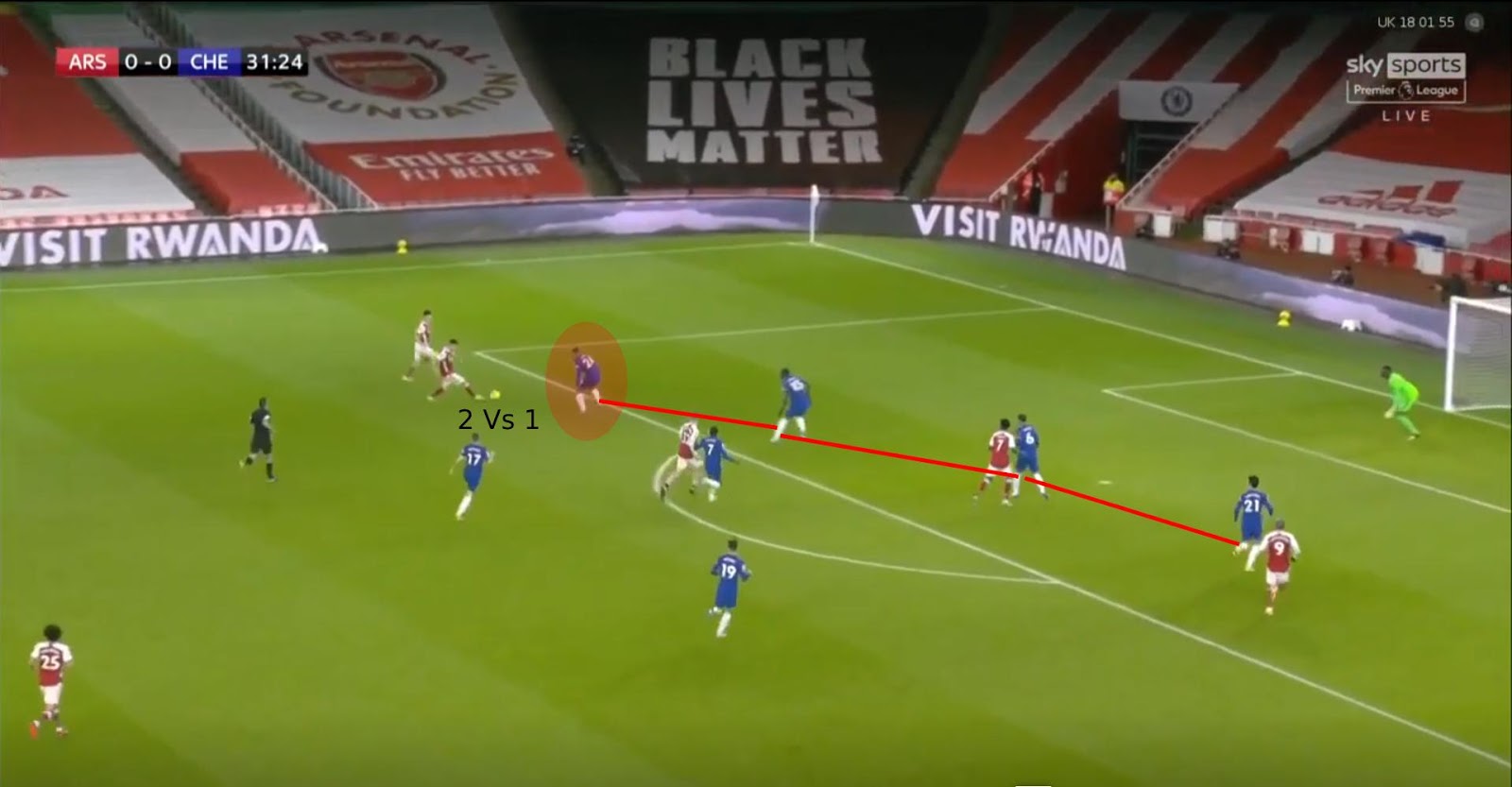 Here, Arsenal have created a two vs one on their left flank against James with the Chelsea full-back receiving no support from his winger or midfielders. This numerical superiority eventually results in a goal for the Gunners, who would go one to win 3-1 on Boxing Day courtesy of goals from Alexandre Lacazette, Granit Xhaka, and Bukayo Saka.

The failure of the attacking midfielders to track back leads to individual errors in the back four with defenders often finding themselves on the wrong side of opposing attackers. 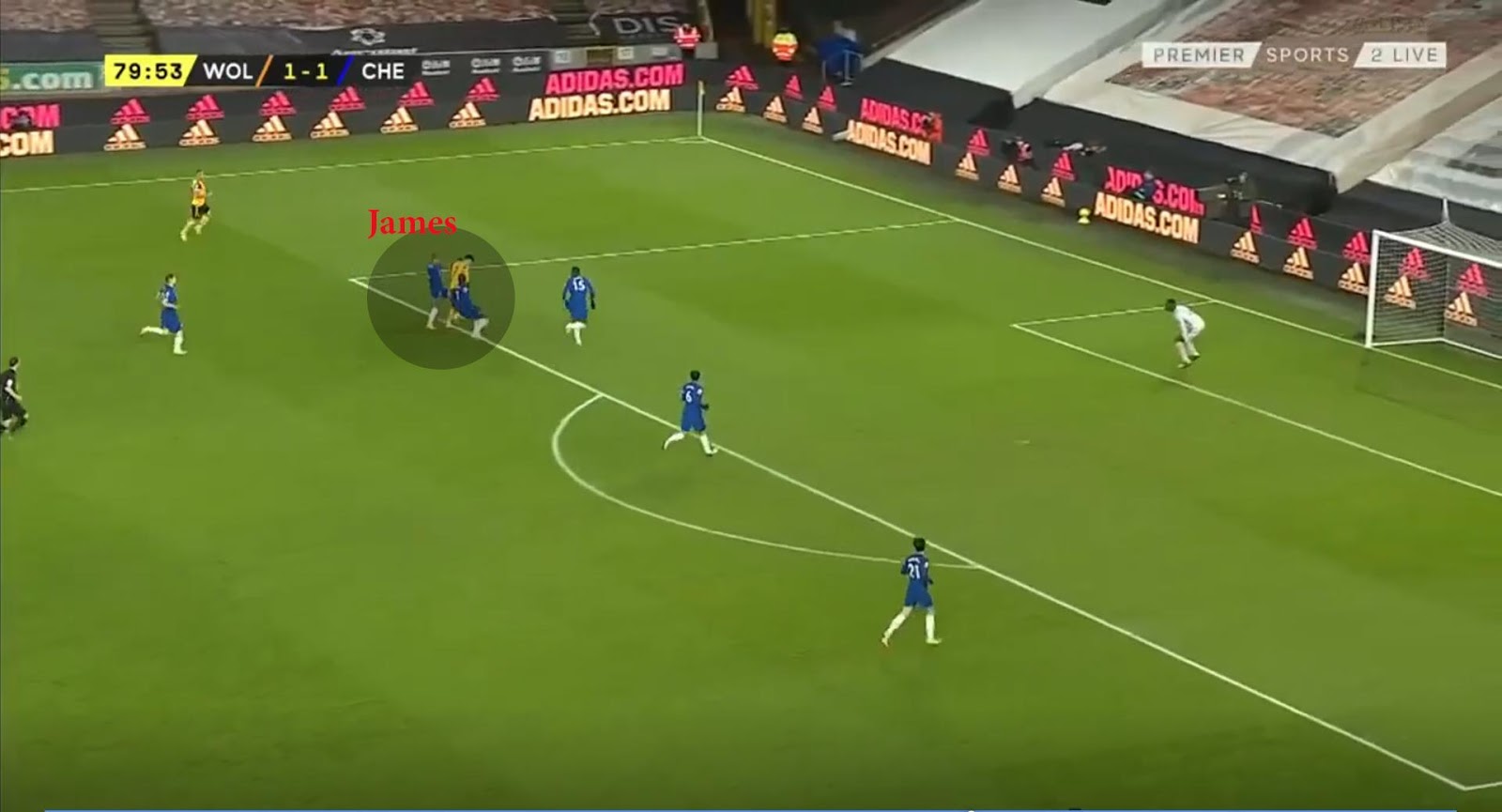 Here, we can see that James is on the wrong side of Wolverhampton’s Pedro Neto. Although the referee initially awards a penalty when the Portuguese winger hits the turf, the decision is reversed following a VAR review. 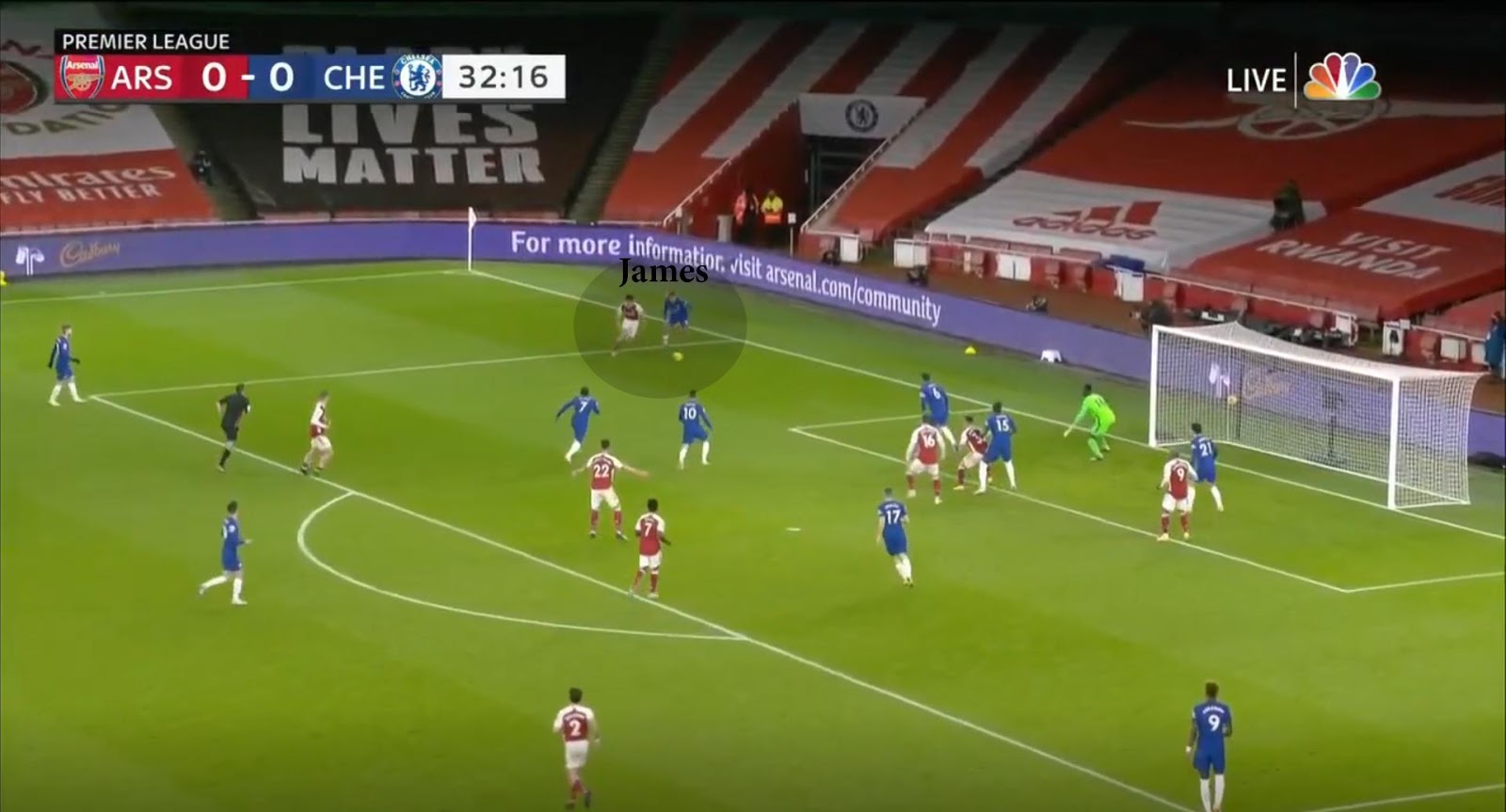 The same thing happens against Arsenal. James again finds himself on the wrong side of an attacker, but on this occasion, referee Michael Oliver’s decision to award a penalty is upheld by VAR and Arsenal take the lead. 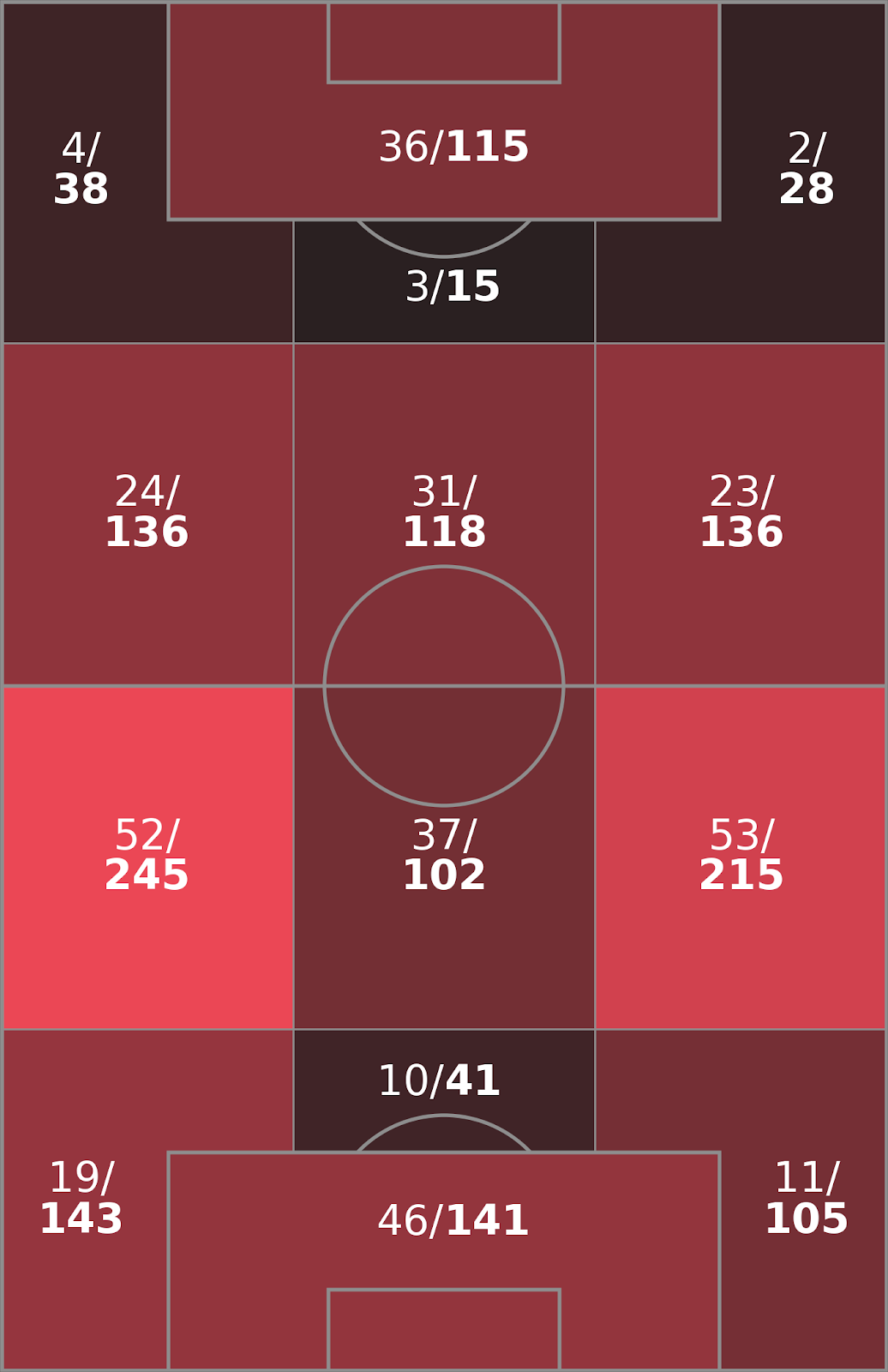 The table above shows the success rate for Chelsea in duels (both aerial and on the ground) during Premier League matches this season and reflects poorly for a team with the objective of competing for the title. In fact, Chelsea’s odds of winning the title have gone from a low of +483 (probability of 17.15%) in early December to +10000 (less than 1%). With the Blues trailing league leaders Manchester City by 12 points, it seems all but certain that Chelsea will endure a fourth consecutive season without winning the title.

Despite adding Thiago Silva, Édouard Mendy and Ben Chilwell to their backline, Chelsea’s defensive issues only worsened under Frank Lampard this season, and his inability to find a consistent structure and rectify their issues at the back proved fatal in his attempts to hang onto his position as manager. Instead, Thomas Tuchel will be tasked with shoring up Chelsea’s leaky backline and building a team capable of launching a title challenge.