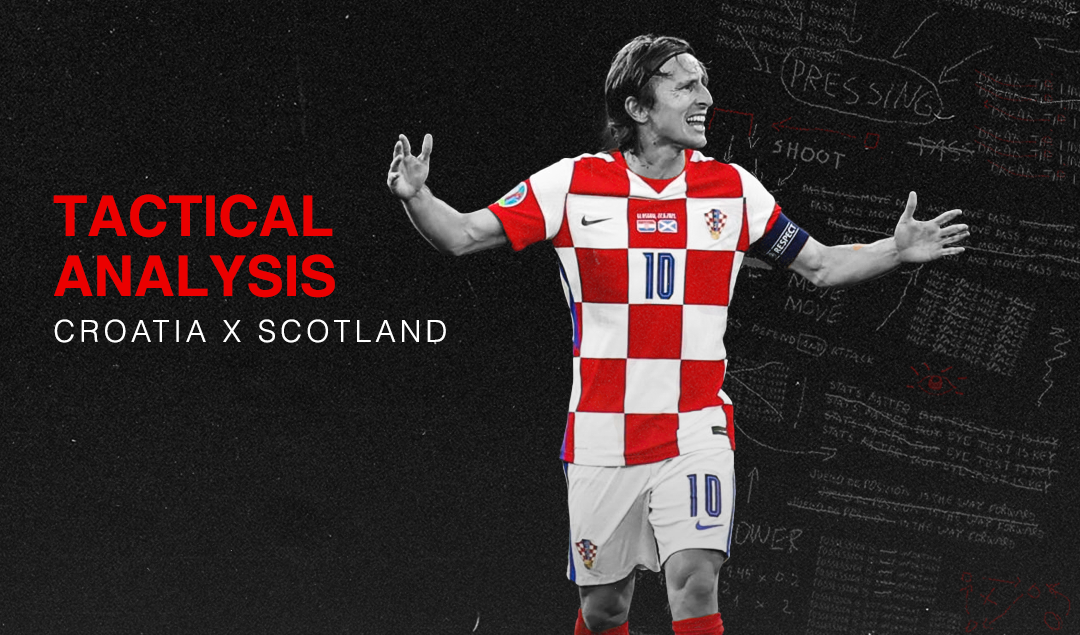 Coming into this final Group D game at Hampden Park, the stakes were high for both Scotland and  Croatia and the terms were as clear as the Glasgow skies; win and advance to the next round, draw and both get knocked out. The importance of the game was evident in the urgency displayed early on by both sides. Scotland especially started well, feeding off the energy of their home fans, John McGinn forced the first save of the game from Dominik Livakovic 6 minutes in.

A wave of Scottish attacks followed so it was only right (going by Scotland’s traditional bad luck) that Croatia found the back of the net with their first meaningful attack in the 17th minute after Nikola Vlasic finished off a well-worked move.

Buoyed by the goal, Croatia instantly established their status as the better team controlling the game from that point onward up until the 42nd minute when Callum McGregor fired Scotland back into the game with a low drive from 20-yards out which sent a majority of the 10,000 fans present at Hampden Park into delirium.

The goal was their first of this tournament and the 5th goal Scotland have ever scored in Euros history. Callum McGregor joins Paul McStay, Brian McClair, Gary McAllister and Ally McCoist as the only players to score a goal for Scotland at the Euros. Only the Wu-Tang clan can boast of a more stacked group of MCs.

That celebration was as good as it got for the Scots, Croatia made the gulf in the talent of both teams apparent in the second 45, Luka Modric regained the lead for Zlatko Dalic’s men with a stunning goal after which Ivan Perisic sealed Scotland’s fate.

Man of the Match: Luka Modric

The man of the match in this game was Luka Modric without a doubt. The diminutive midfielder delivered an outstanding performance and exemplified the wide gulf in quality between both teams. You wouldn’t be able to tell he will be 36 in September with the way he enchanted the Scottish midfielders. They couldn’t get anywhere near him and at times he even looked like he was playing a separate sport from the rest of his opponents. 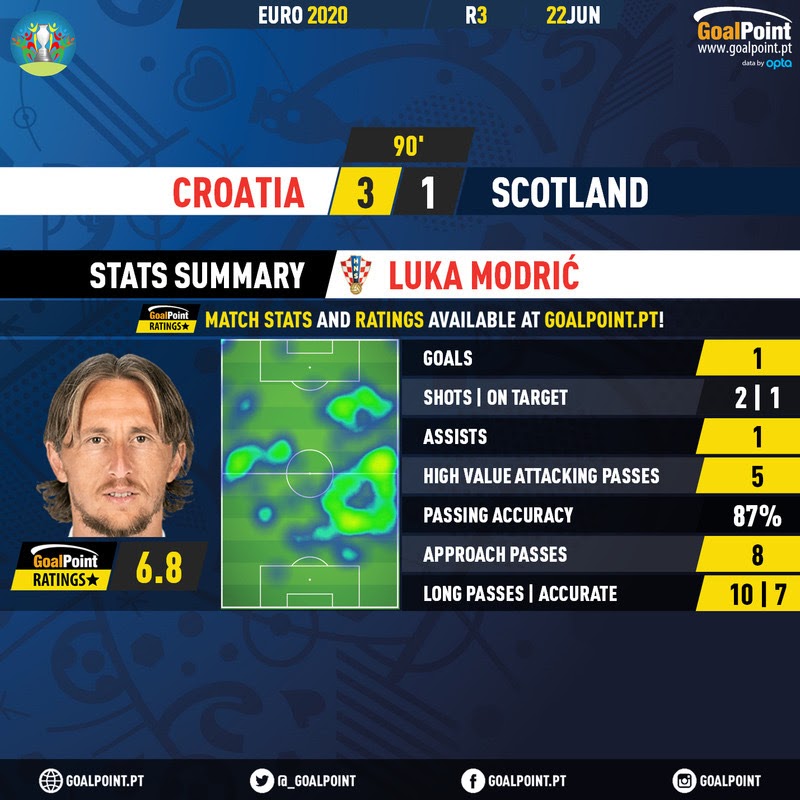 Luka Modric produced a vintage performance crowned with a splendid goal and assist to help Croatia advance to the Round of 16.

His goal helped douse the pressure Croatia were under, a tantalising strike with the outside of the right boot to give them the lead. Modric dictated the tempo of the game and showed tremendous energy at that age to cover multiple roles as the game demanded.

Modric also had a hand (more accurately a leg) in Croatia’s 3rd goal, his whipped corner was flicked home by Ivan Perisic to seal all 3 points for Croatia. He ended the game with a goal and an assist and led the game in overall touches to help his team secure passage to the next round. After failing to shine in their first 2 games, Modric came alive against Scotland, proving once again that form is temporary but class is permanent.

The win along with the result in the other game between England and Czech Republic meant Croatia not only qualify but do so as runners up in the group where they were subpar until the last game. Croatia will now face the runners-up of Group F which is still wide open as it is. Their next opponents could be anyone of Germany, France, Portugal and Hungary.

To have any chance of winning this potential nightmare tie, Croatia must maintain the level they played at against Scotland and then some. As for Scotland, this is the end of the road and it went pretty much just as any objective person could have expected, they simply aren’t good enough right now but the potential to improve is there for all to see.

Scotland were more attack-minded and adventurous in this game than they normally are thanks to the jeopardy of elimination but it wasn’t enough. Yes, they attacked, surged forward when they could but the Scottish team never really looked comfortable in possession and that proved to be their biggest undoing.

Steve Clarke’s major mistake in this game was the decision to willingly concede the possession battle to their opponents. The plan was to let Croatia have the ball while Scotland defended resolutely and broke forward on the break. Of course the plan backfired, when you let the likes of Brozovic, Modric and Kovacic control the ball, they control the game and as such create chances which is what happened at Hampden Park. 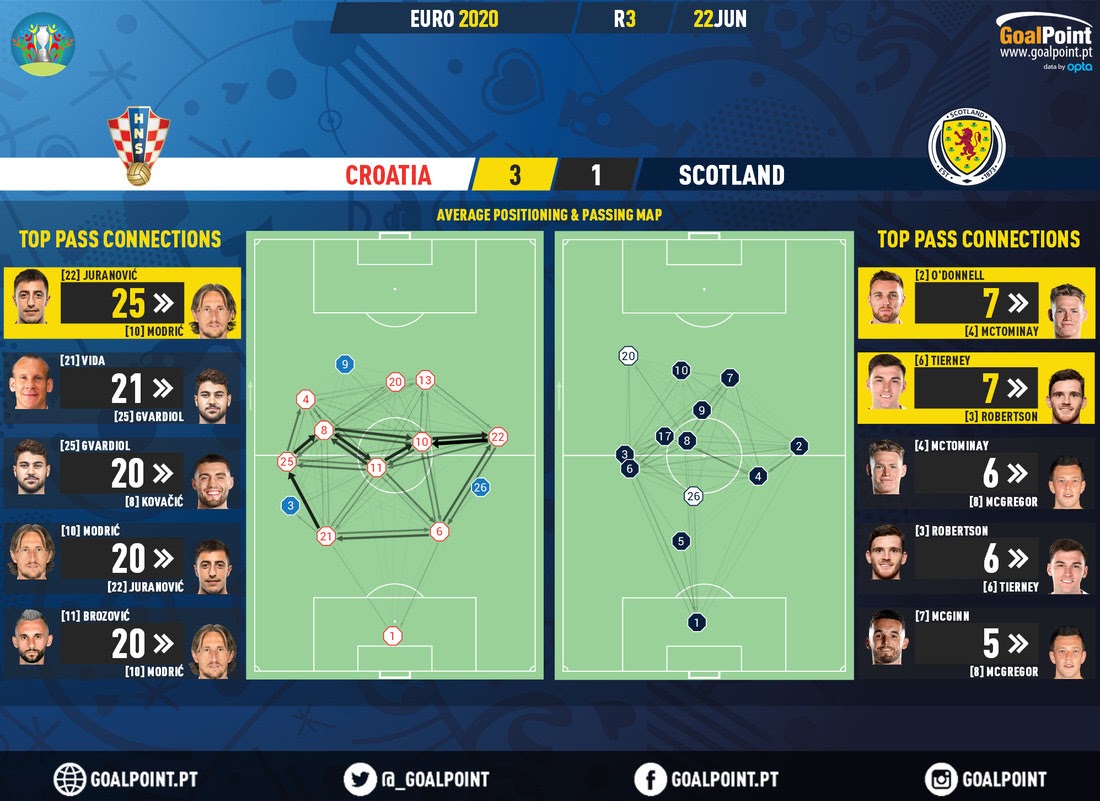 Scotland shot themselves in the foot by letting Croatia have the ball, enabling them to comfortably win the midfield battle.

Scotland’s midfield trio of John McGinn, Callum McGregor and Stuart Armstrong aren’t as bad as Croatia made them look but they struggled to hold the ball for long spells because they’re mostly runners and box to box midfielders.

Too bad Billy Gilmour was out with Covid, Scotland could have really used his ball retention skills and calming influence, especially when the game was tied. The midfield turned out to be the difference between both sides in the end.

With elimination staring them in the face after picking up 1 point in the first two games and deliver poor performances in both, Croatia had no choice but to improve against Scotland. Zlatko Dalic’s men had a lot to improve upon, they received criticism for lack of intensity and inability to create good goal scoring chances and both issues were addressed at Hampden Park.

Although it was more down to what Scotland failed to do rather than what Croatia did. England and Czech Republic understood that to beat Croatia, you have to nullify their midfield threat. They made sure Croatia’s midfield never got going by throwing a spanner in the works with consistent pressing and aggressive tackling. 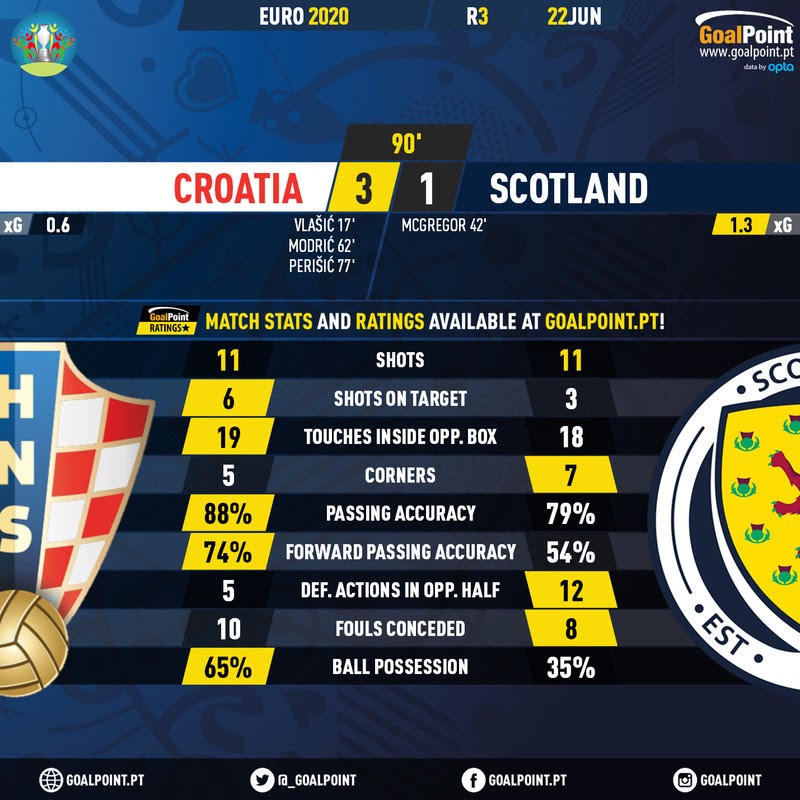 Croatia improved their tempo and passing against Scotland because their opponents allowed it unlike England and Czech Republic.

Against Scotland, they were given much more freedom to operate and that’s exactly what they did. As Croatia became more comfortable and inventive with the ball, passing around with flair and creativity that was missing in their first 2 games.

The build-up to Vlasic and Modric’s goals prove this point, Croatia put together 22 passes before scoring on each occasion and the more Scotland allowed them to play, the more confident they became. They looked like the 2018 World Cup runners-up once more and will now be hoping they can carry that confidence into the next game.