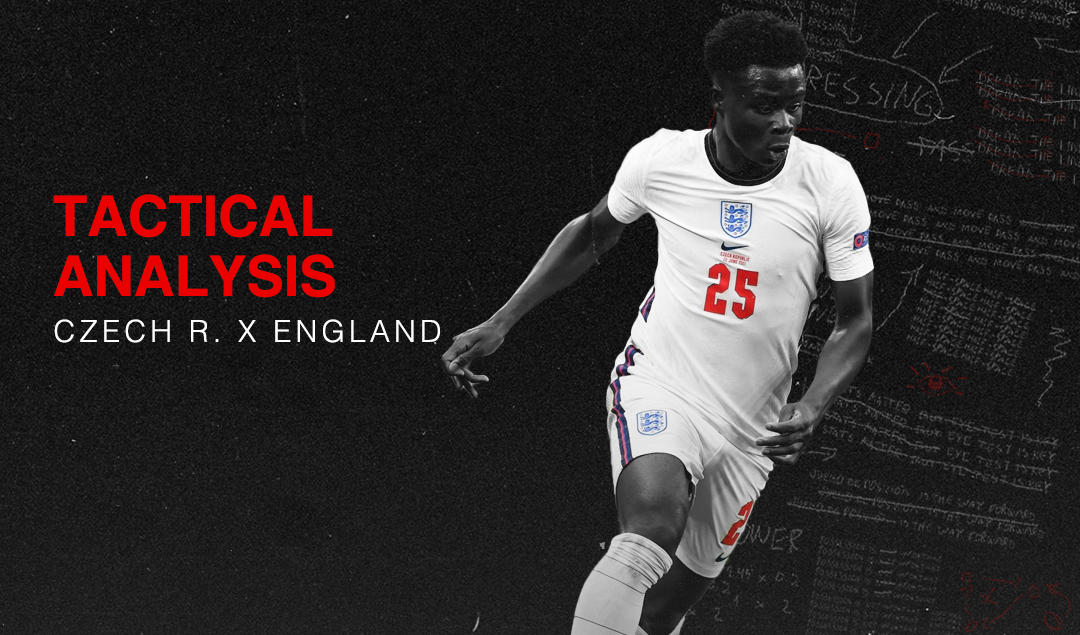 England and Czech Republic met at Wembley Stadium on Tuesday evening to decide top spot in Group D after both teams had already secured qualification by means of results elsewhere. The two sides met in their qualifying group for the tournament, with England winning the first meeting 5-0 before losing 2-1 in the corresponding fixture.

With both sides looking to secure their specific spots in the Round of 16, it was England who started the brighter of the two sides. Luke Shaw’s early lofted ball in the 2nd minute found Raheem Sterling, who had snuck behind the Czech’s backline, but the Man City man could only watch as his ball lofted over the goalkeeper struck the post. Nevertheless, it wouldn’t take long for the home side to take the lead at Wembley.

Teenage sensation Bukayo Saka’s individual brilliance started the move, leading to Jack Grealish’s cross being met by the head of Raheem Sterling. It was Sterling’s 2nd goal of the tournament and just the start England were hoping for. England went close to doubling their lead just before the half-hour mark as Harry Maguire broke the lines with a brilliant ball to the feet of Harry Kane, who cut in on his right foot but was thwarted by the strong hand of Tomas Vaclik.

Czech Republic responded well to going a goal down and tested Jordan Pickford with a long-range effort from Tomas Holes, but the goalkeeper managed to tip it round the post for a corner. Moments later, England faced another scare as the ball bounced around the box but Maguire threw his body in front of Tomas Kalas’ effort. The second half was a lot of ball movement but very little done with it from either side as England cruised quite comfortably to a 1-0 win.

Man of the Match: Bukayo Saka

The Arsenal teenager was drafted in the starting lineup quite unexpectedly for England’s final group game but proved to be the best player on the pitch. From the first whistle, the 19-year old was eager to get on the ball and make things happen. He constantly ran at defenders and gave Jan Boril an absolutely torrid time at left-back for the Czechs. 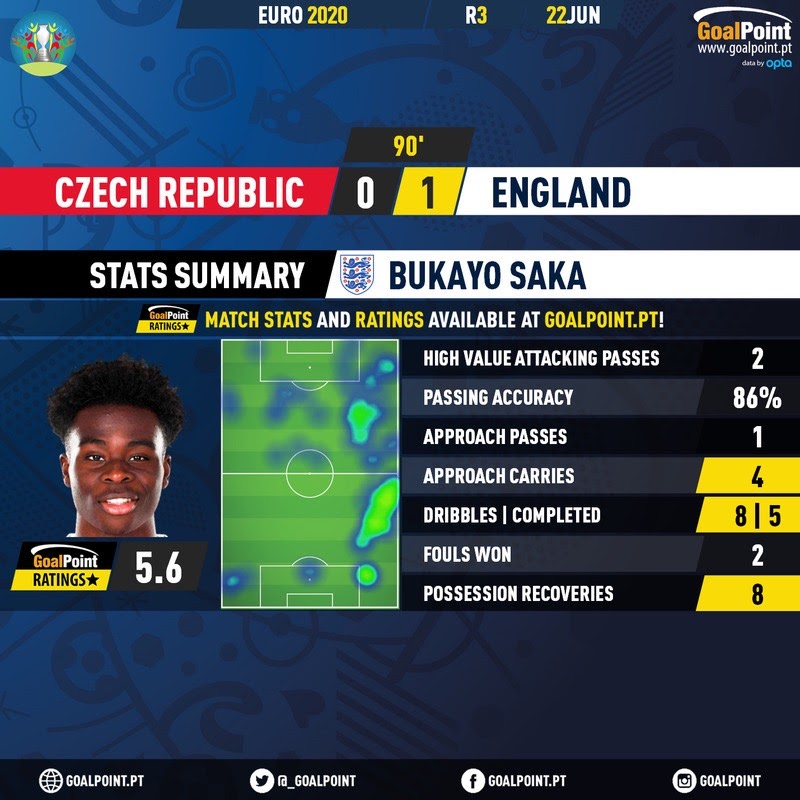 Having failed to make the bench for the previous game against Scotland, Bukayo Saka delivered a top-notch performance on the right flank and proved to be just the right elixir to combine with Raheem Sterling and Jack Grealish.

It was Saka who began the move for England’s goal and for a teenager in just his 6th England cap, he looked like a seasoned veteran on the right-wing. It was a superb performance for the youngster and one that made Gareth Southgate’s controversial decision to start him, a crucial one.

Alongside Jack Grealish, the two caused all sorts of problems for Czech Republic’s backline with their quick feet and bursts of pace to get in behind the defence. While he may not have scored the only goal or directly assisted it, it was Saka’s willingness to drive at players and get on the ball confidently that made England look dangerous in the first half.

The results in Group D on Tuesday evening shake up the standings as 3 of the 4 teams qualify for the Round of 16. England’s 1-0 win sees them take spot in the group with 7 points, setting up a date in the next round with 2nd place in the Group of Death, Group F. England’s first-half performance was more of the attacking prowess their fans were hoping for but once again, the second half dropped and it was awfully passive and lacking.

With a potentially huge matchup waiting for them in the Round of 16, England’s performance will have to improve drastically and rapidly. Czech Republic were already qualified coming into the game but the defeat, plus Croatia’s 3-1 win over Scotland, dropped them to 3rd in the group and they will have to wait and see who they draw.

Jack Grealish’s first start for England in a major tournament, replacing Mason Mount in the starting eleven for the game against Czech Republic. Grealish, starting in behind captain Harry Kane who is not shy to drop deep to collect the ball to then allow wide players in Raheem Sterling and Bukayo Saka to advance and push the Czech Republic back-line further back.

And it was this move from Harry Kane that allowed the transition from Sterling and Saka. Therefore, generating more space in between the Czech Republic defensive line and their midfielders. An ideal situation that Jack Grealish exploited, dragging Vladimir Coufal and Thomas Holes to him when moving the ball within the box. 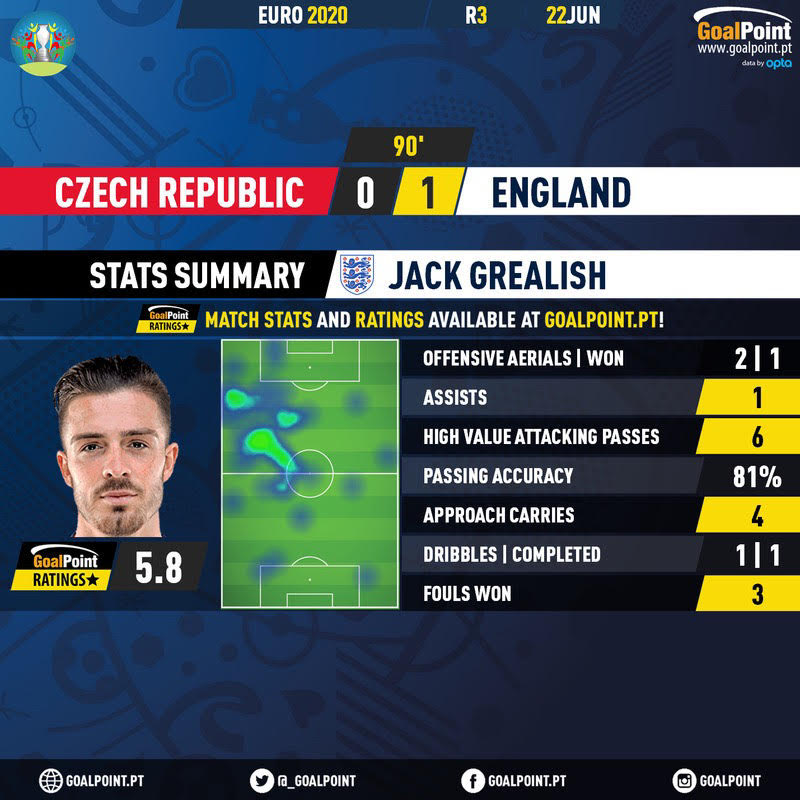 After starting the past two games on the bench, Jack Grealish used Mason Mount’s absence to prove just how important he can be for England’s attack.

In which Grealish then knocked the ball to the byline with his right foot, using a change of pace to beat both defending players, to float the ball to the back post with his left foot for Sterling to nod home from a few yards out. Grealish transitioned throughout the game from his 10 role in behind Kane to the left and right wings due to the rotation of Kane dropping deep, causing either Sterling or Saka to play as a temporary 9 with the space left from Kane.

This left confusion within the defensive structure of Czech Republic. Grealish excelled at his role in the game, carrying the ball forward which seemed effortless for the Aston Villa man. He has taken his chance to influence Gareth Southgate’s decision that he deserves to start in the Round of 16 match at Wembley. An utter masterstroke from not only Jack Grealish, but from the front four of England.

Kalvin Phillips yet again played another full game for England, meaning he has played every minute in England’s Euro campaign so far. A dazzling solo display in the first game against Croatia in which he assisted Raheem Sterling for the only goal of the game.

A formidable partnership has been struck up in recent games with Declan Rice acting as the 6, which then allows Phillips to advance into a roaming eight to affect the game more in an attacking sense. However, Phillips can be seen various times to drop alongside Rice causing a double pivot and with Southgate also transitioning the backline with Kyle Walker dropping alongside 2 centre backs causing a 5-2-2-1. 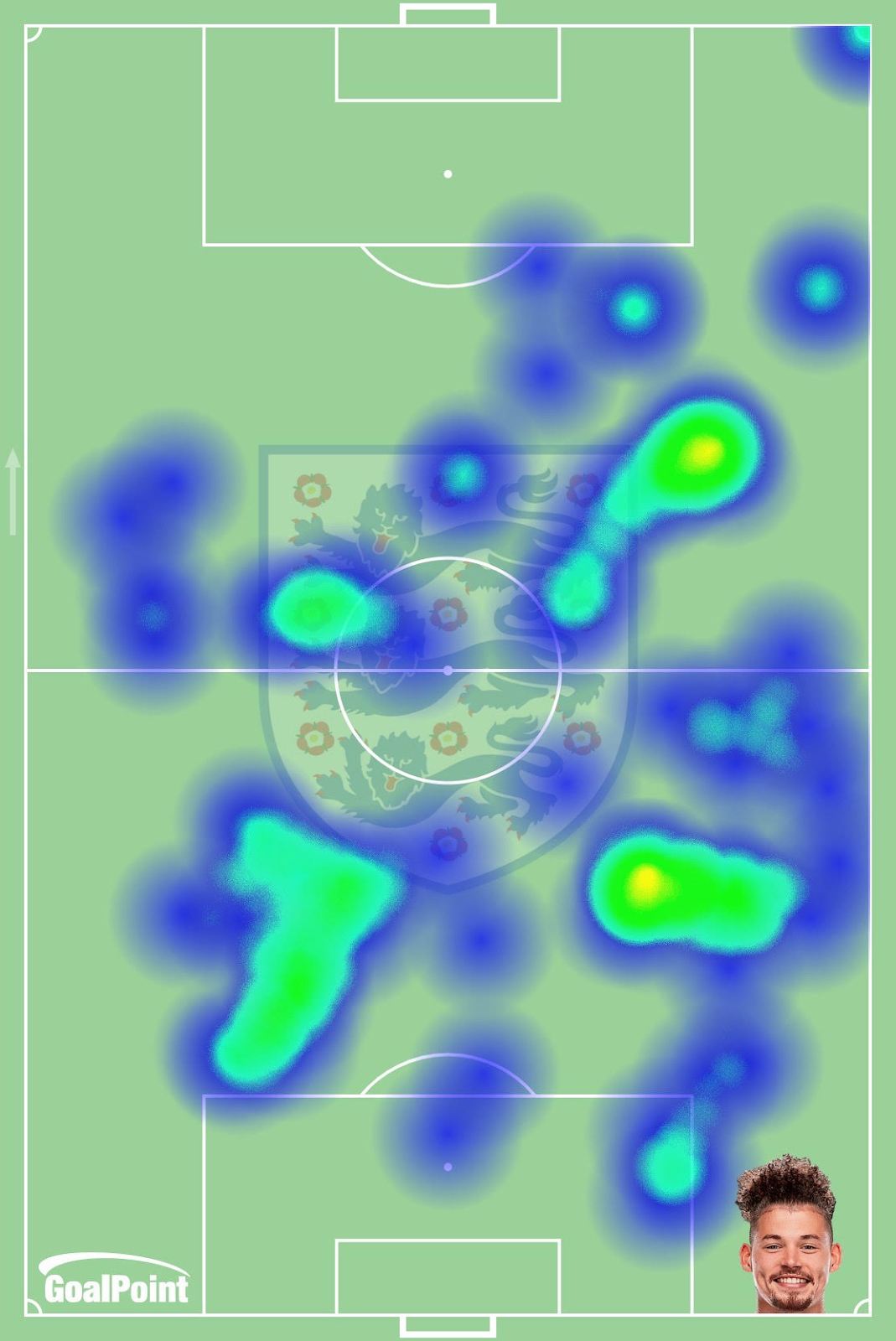 Kalvin Phillips has been a constant bright spot for England in midfield and proved just why he is a starter under Gareth Southgate in their final group stage match against Czech Republic.

This U-shape strategy causes the opposition to move the ball sideways rather than forwards due to a lack of space and an unlikeliness of the forwards being able to break the lines.  This was also seen in the first half, when Southgate had Walker drop alongside the 2 centre backs. However, England was set up in a 4-2-3-1 which therefore made the areas to cover for Rice and Phillips greater, but allowed for a better goal-scoring opportunity due to there being more attack-minded players on the pitch.

At halftime, Rice was replaced by Jordan Henderson who plays more advanced than Rice. Therefore, causing Phillips to drop deeper in midfield to a 6 role, which made it harder for the Leeds United man to affect the final third. In the second half of the game, England recorded 0.00 xG, which therefore stems a better light for Phillips to stay playing in the roaming eight role for future England euro games to come.