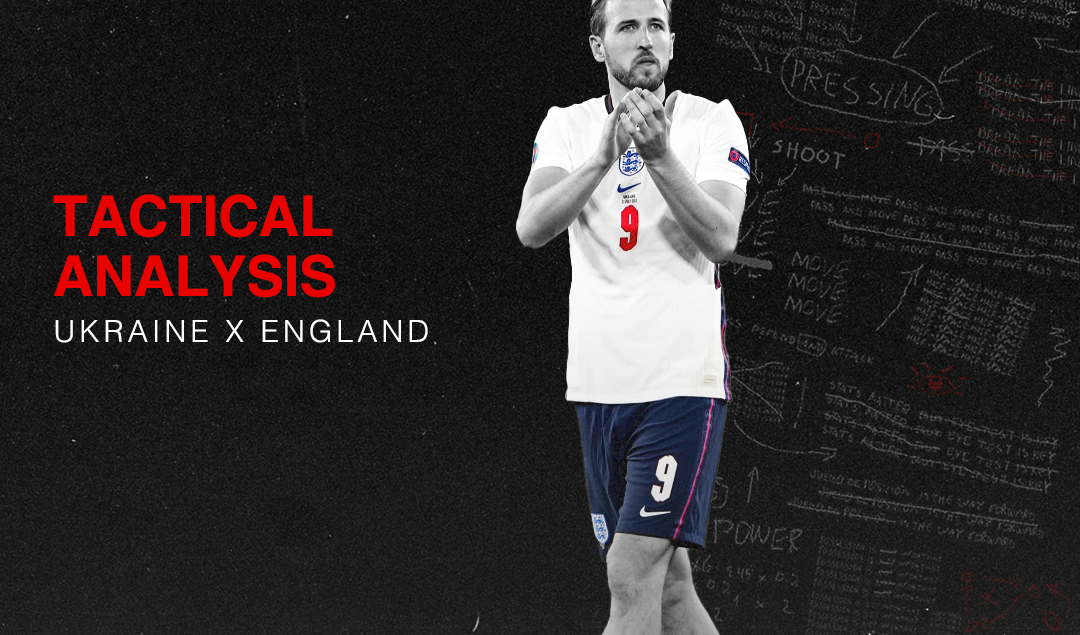 Gareth Southgate stood in awe of the excellence that was on show in Rome for the quarter-final tie against Ukraine. The culmination of steel and flair was on show for all to see in the Italian capital, and the English ascendancy was dominant throughout the match.

It took less than 5 minutes for England to break the deadlock with Harry Kane silencing his doubters on the receiving end of a brilliant through ball from man of the moment Raheem Sterling. England, up with a 1-0 lead saw their way to halftime with ease and fully in control. However, a 1-goal lead has proved to be deceptive particularly in this tournament, and the Three Lions came out firing for the second half.

Less than 2 minutes into the second half, Harry Maguire headed in a precise free-kick, and just 4 minutes later Harry Kane, similar to his namesake, scored in a header past an uninspired Heorhiy Bushchan. Both goals assisted by Luke Shaw, whose turn in form of the last 18 months has proved how form is definitely temporary and class is permanent.

By this point; the 50th minute, the tie was over. Gareth Southgate could rest assured knowing that his side were well and truly on their way to another semi-final, if by this time it hadn’t been, by the 63rd minute Liverpool captain Jordan Henderson’s goal sealed the deal. Knowing this, Southgate had the luxury of substituting his various talismen, taking off Shaw, Sterling, Kane, Declan Rice and Kalvin Phillips.

The stars of the show could be rested for a semi-final tie against the Danish. Having said this, the squad depth in the England side was there for all to see. Marcus Rashford, Jude Bellingham, Kieran Trippier, and Jordan Henderson, all proven winners and with bag loads of quality came on to see out the outstanding night in Rome.

Man of the Match: Harry Kane

Whilst Harry Kane has dealt with some harsh critics in the opening matches of the tournament, the star striker’s goal against Germany and performance tonight has shown that on the grand occasion, Tottenham Hotspur’s leading goal scorer lives for the occasion.

Two goals, that settled nerves early on in Rome eased the tensions and fears of a shock today, as well as the striker’s all-round link-up play with both Raheem Sterling and Jadon Sancho proved to be pivotal for the English going forward. 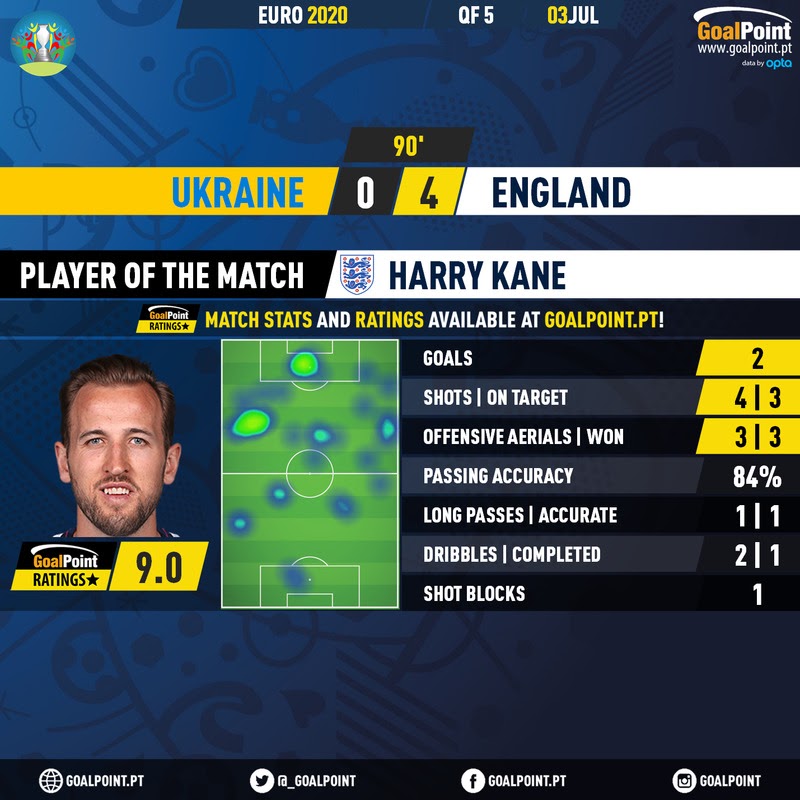 After breaking his goal duck in the waning minutes against Germany, Harry Kane delivered a stellar performance in Rome, demonstrating why he is one of the finest strikers in world football.

Kane’s involvement in the box proved deadly with 3 shots being on target, and two finding themselves in the back of the net. Harry Kane’s resilience to keep fighting amidst calls for his exile from the starting XI, proved immense today, a relief for England and the captain himself.

As the fairytale ends for the Ukrainians, their Euro 2020 journey has been a memorable one – though getting demolished by the English in the quarter-finals, Andriy Shevchenko’s side was the first Ukraine side to reach this stage of the tournament. As for the English, their hopes continue, and they will be on familiar territory going back to London for the semi-final, and potentially, the final which should be an extra motivation for the Three Lions. As Southgate carries the hopes of the nation, the people continue to wonder if it truly is going to come home?

With England cruising to a comfortable victory in Rome, what has to be applauded is the change in system from Gareth Southgate. Opposed to the match against Germany, Southgate’s decision to play 4 at the back rather than 5 today proved to be decisive in the free-flowing and charisma that was on show from the 3 lions. Bringing in Jadon Sancho for his first start of the tournament showcased the flair and direct attack that England have, which proved to devastating effect from the front men.

The use of overlaps from both Luke Shaw and Kyle Walker, and also the wide men in Raheem Sterling and Jadon Sancho provided extra width and finesse to the game that the Ukrainians could not deal with. The license given to Luke Shaw to get further up the pitch proved to good effect, especially for his 2 assists, taking him up to 3 for the tournament. 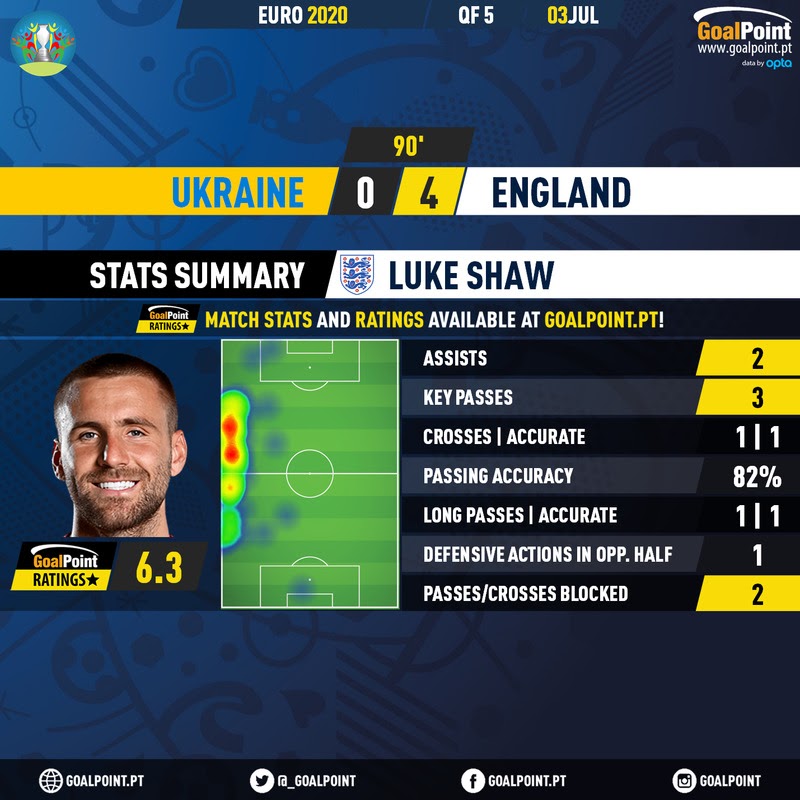 Despite riding the bench in England’s opening match against Croatia, Luke Shaw has quickly become one of the most important members of Gareth Southgate’s England, and his quality was on display once again at the Stadio Olimpico.

Andriy Yarmolenko’s Regression to the Mean

Though performing well in the previous matches, with rare sights of raw talent, Andriy Yarmolenko’s lack of influence in the match proved to be very costly for the Ukrainians. After a wonderful goal against the Dutch, and a superb assist in the last round against the Swedes, it may be a shock to some to see how ineffectual the West Ham winger was today. 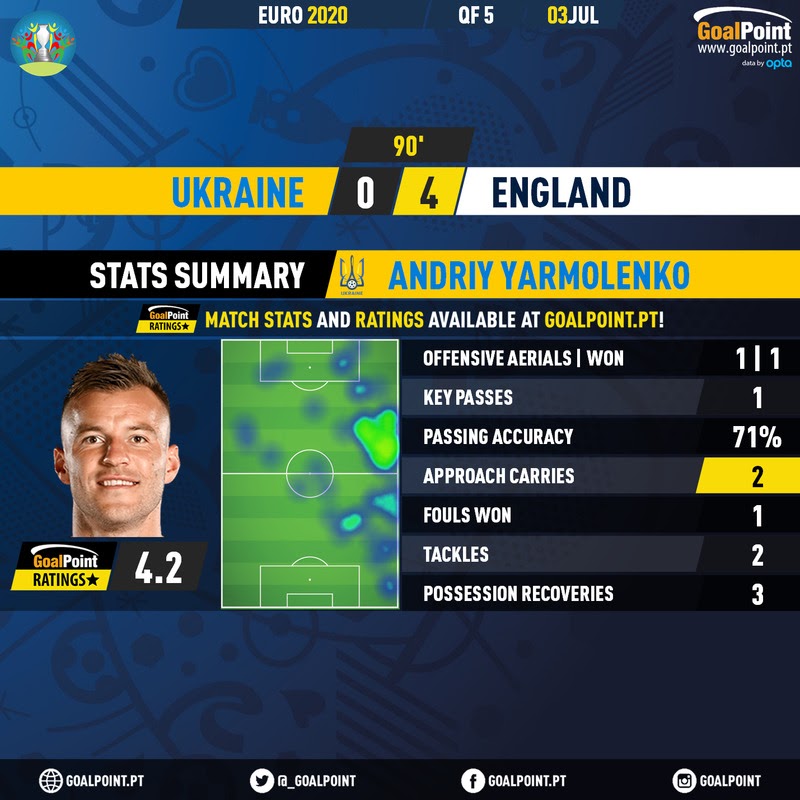 His lack of any shots on target as well as just a 71% pass completion rate of 22 passes, signified his lack of presence within the match. Moreover, whilst Yarmolenko played the role of passenger in the Ukrainian side, so did Gent striker Roman Yaremchuk who has also had a decent tournament up to date. Though the match was a tough spectacle for Ukrainian fans, the side can hold their heads high for their performances and quarter-final finish.