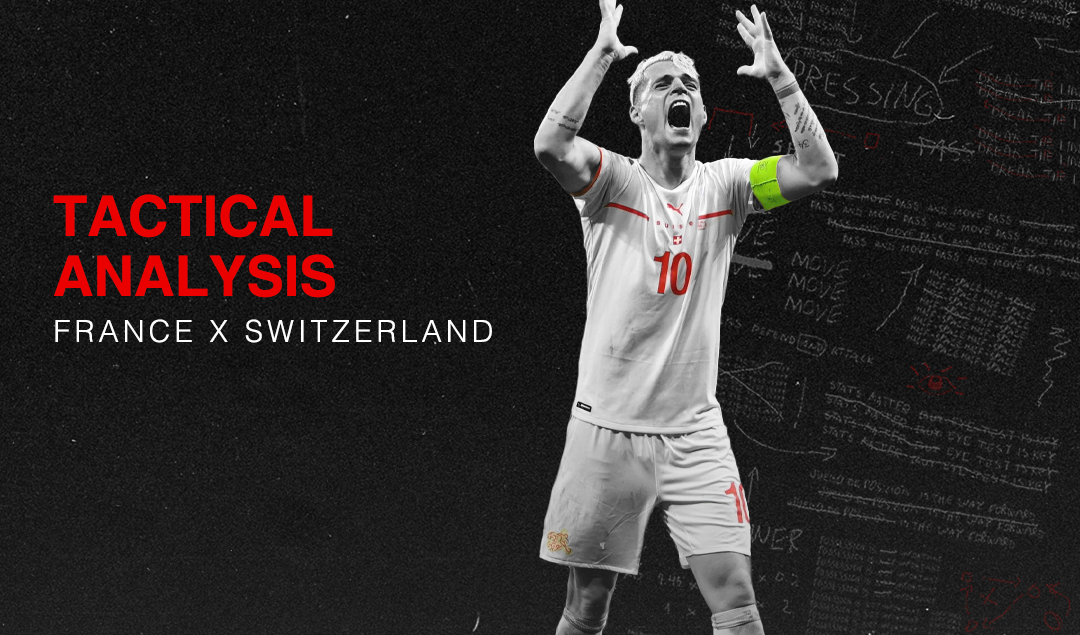 “Football, bloody hell.” It seems the most appropriate quote to apply to a game that manipulated with narratives, endings, villains and heroes all within 2 hours of football. The beginnings of a fairytale, the overpowered antagonists coming into the fray but back comes the plucky underdogs to win it all. An Oscar-winning motion picture was written in Bucharest.

The madness of the evening began when Haris Seferović nodded the Swiss into the lead. As the saying goes, football can change in an instant and it did. Ricardo Rodriquez saw his penalty saved by Hugo Lloris as the chance to go 2-0 up against the World Champions was gone as quickly as their lead in the game.

Within four minutes, Karim Benzema had struck twice and the French were at their va-va-voom best. The epitome of such ‘va-va-voom ness’ was Paul Pogba who, once again, put up his name in lights when he curled a scorcher into the very very top bins. France’s place in the Quarter-Finals was booked, but things are not so easy at the European Championships.

Seferović guided home another header to ignite a comeback that couldn’t be conceived 90 seconds prior. Captain fantastic, Granit Xhaka, threaded into the path of Mario Gavranović who proceeded to put Presnel Kimpembe into a blender and fired into the bottom corner. The French were stunned. Penalties loomed.  Here’s the big finale. The young king, the golden boy, the saviour of a nation stepped up to rescue his country. Disney scripts have no place in football. Switzerland victorious.

Man of the Match: Granit Xhaka

On a night where the fairytale underdogs won, it only made sense that the pantomime villain, Granit Xhaka, was at the heart of it. In fact, he was the beating heart of the Switzerland side that trumped and refused to give in against France. The Swiss captain controlled the midfield that defiantly halted the French. It was his adeptness at transitioning from an anchoring midfielder to a progressive playmaker that made Switzerland so dangerous going forward. 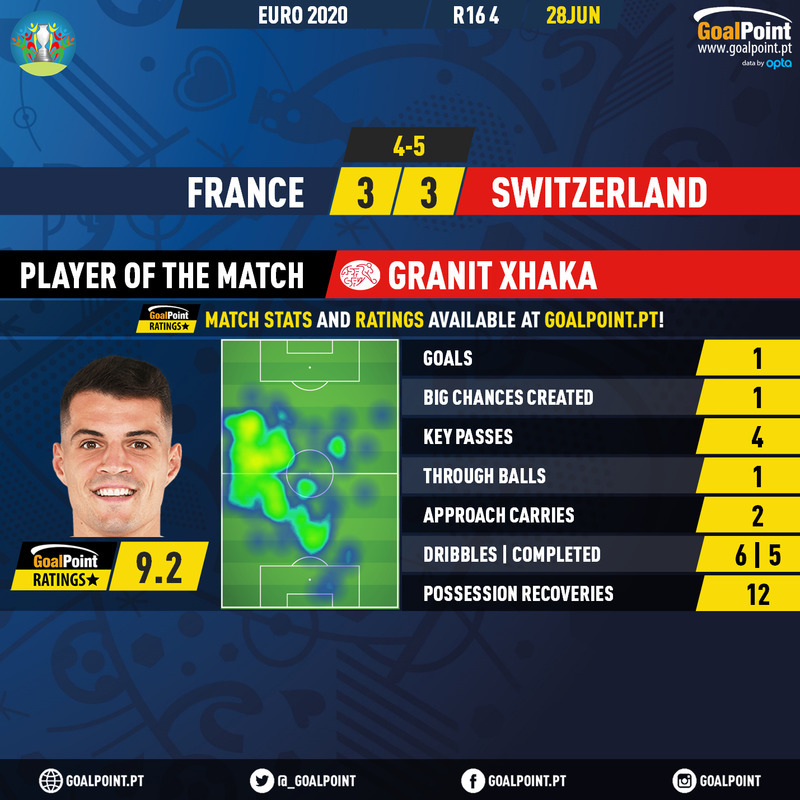 The Arsenal midfielder put in a fantastic shift in the center of the pitch against the likes of N’Golo Kanté and Paul Pogba and led Switzerland to a shock victory in Bucharest. Granite defiance in the face of the French, Xhaka steadied and propelled the Swiss into the Quarter-Finals for the first time since 1954.

One moment Xhaka would look to control the tempo by feeding into his partner Remo Freuler, the next by playing a splitting pass into the half-space that had the French defenders stumbling. His link-up play with Akanji who was more than willing to offload the ball into Xhaka that turnt the all-out rockstar into a master conductor of the Swiss orchestra.

As per GoalPoint data, Xhaka’s influence on the game came through his excellent passing display. 4 key passes and 1 big chance created, notably his needle-like pass into Gavranović that drew the Swiss level. As far as a captain’s performance goes, he epitomised exactly what it means to represent your country on the biggest stage of them all. With the nation on his back, Xhaka hauled them over the mountain and into the Quarter-Finals.

The show-stopping World Champions are out. In a tournament of potential dark horses, Les Bleus were the Golden Stallion. A World Cup embroidered on their shirt and two stars to match, a place in the final four was the minimum expectation for their second golden generation. Fool’s gold. In the shadow of two Jules Rimet’s and two Henri Delauney trophies, the Swiss will enjoy the greatest night in their footballing history.

A nation divided on their culture, customs and language is brought together by the universal joy that Vladimir Petković has brought to the country. Switzerland are in the Quarter-Finals of a major tournament. For the nation of 8.5m it’s only the small matter of 3x European Champions Spain on Friday. However, after knocking off France the Spanish might seem like a cake-walk. A Swiss roll to be specific.

When Vladimir Petković’s men lined out against the French for the last 16 tie, the Swiss had been deemed the greatest underdogs to go through, however the lacklustre and ineffectual formation and planning from Didier Deschamps’ Les Bleus proved to bite them in the first half.

The decision to play 3 at the back, with Clément Lenglet coming into the centre of the 3 and Juventus midfielder Adrien Rabiot at Left Wing Back, proved itself costly with the Blaugrana defender being overpowered by an inspired Haris Seferović to make it 0-1 to the Swiss at half time. Deschamps’ tactical misfortune made the half a sore point for the French fans who have been gifted with the best attackers in Europe, seeing them nullified in the last 16 against a Swiss side who they were expected to beat comfortably.

Whilst Deschamps pragmatic approach suited the Swiss style of play, the French lined up for the Second half in a totally different outfit. The substitution of Clément Lenglet for Kingsley Coman, saw the team shift to 4 at the back, with Adrien Rabiot at left back looking far more comfortable.

Being the case, after Ricardo Rodriguez’s missed penalty in the 52’ minute, the creativity and elegance of the French team showcased with 3 goals in quick succession with 2 from Karim Benzema and a precise strike from Paul Pogba. However these attempts at victory were all in vain, considering the end result, out of favour for the French. 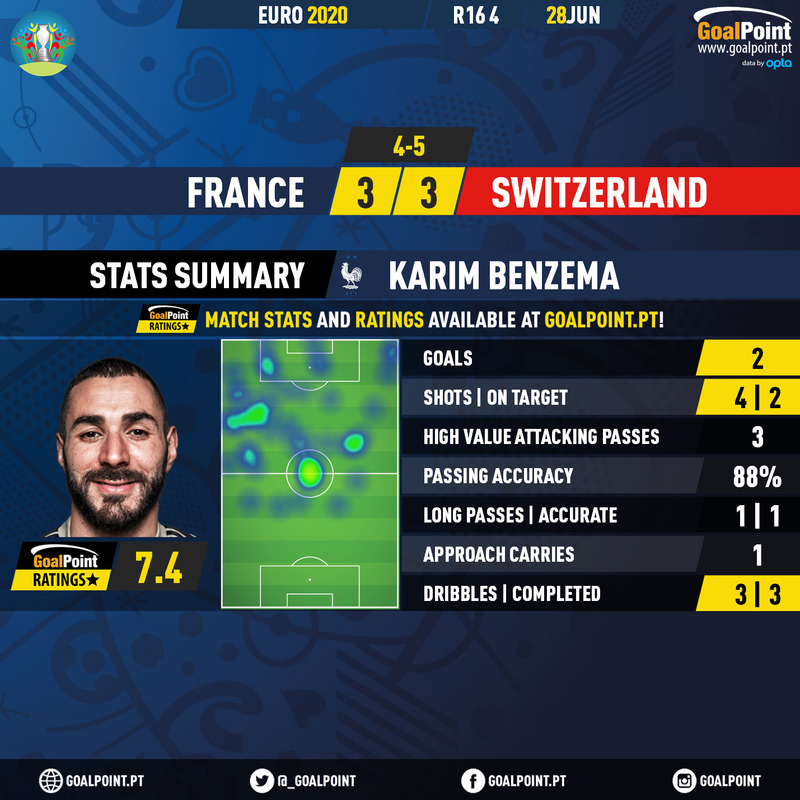 After bagging a brace against Portugal in the final matchday, Karim Benzema stepped up to the task and nearly led France to the next round with two goals in quick succession.

Though many would have tipped Kylian Mbappé to be the forerunner in the race for the Golden Boot, not many would have expected 0 goals and an exit in the last 16 for the PSG golden boy. Though his class was undoubted, the young star failed to impress against the Swiss, thanks partly to an excellent showing from Nico Elvedi who subjugated every attack the frenchman had.

However alongside this, Mbappé missing a golden opportunity in the second half of extra time following a succulent pass from Paul Pogba, had French hearts in their mouths, yet the match was an encounter to forget for the boy from Bondy.

Though missing a clear cut chance in the second half of extra time, Mbappé’s duties as penalty taker saw the first penalty of sudden death fall on the young man’s shoulders and with the scores 5-4 to the Swiss, Kylian had to follow on from Presnel Kimpembe, Olivier Giroud, Paul Pogba and Marcus Thuram successful spot kicks. 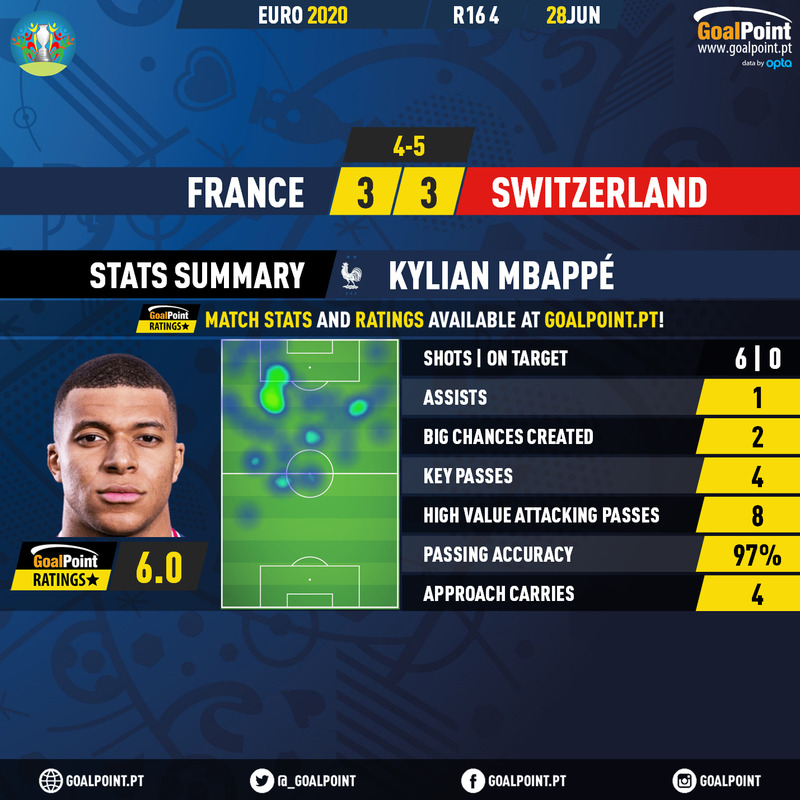 Kylian Mbappé continued his struggles in the Euros and failed to provide a bright spark in attack as France suffered a humiliating elimination to the Swiss in the Round of 16.

However, the bright lights of Bucharest and the wonderful unexplainable nature of football showcased itself with the world’s hottest talent failing to score from the spot; a save from Yann Sommer was enough to send the Swiss through. A poor performance and poor tournament for the Golden Boy, but one in which he will learn from, and use to continue to mesmerize the world with his ability.

Now, tournament favourites France have been knocked out, the Swiss will continue on to the quarter finals of the Euros for the first time in their history. Going forward, an inquest may even be held into the failed French effort with such an eye watering, star studded line up, surely a last 16 loss and subsequent departure from a major tournament should not be tolerated right?

As for the Swiss, their giant efforts and inspiring spirit may see them continue long into the tournament, which has provided many shocks and resilient performances from what would be considered ‘underdogs’. This night in Bucharest, is the epitome of why football is the greatest game on Earth; a beautiful story of an underdog fighting and achieving the impossible to progress and continue this wonderful Swiss adventure.