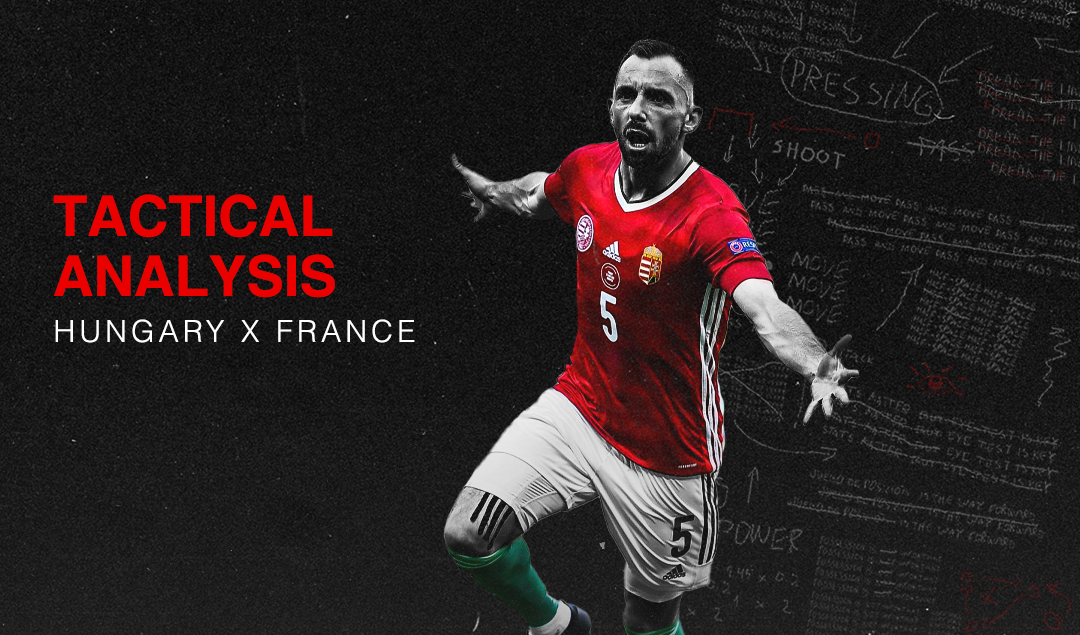 The games played in Budapest at full capacity are reminding us of pre-COVID times gone by, where crowds were raucous and the 12th man. With a partisan atmosphere and the crowd cheering every block and positive Hungarian play, they pushed a spirited, aggressive Hungary team to frustrate the world champions and gain their first point of the tournament.

The game could be epitomised by the increasing frustration etched on Paul Pogba’s face throughout the game, as Hungary ruggedly tussled with France. Hungary transformed the game to be uber physical, wasting time, shoving the French players, niggly little fouls that exasperated the world champions. Diego El Cholo Simeone would´ve been proud, at times it felt like you were watching Atletico back at the Calderon, it’s extremely uncomfortable atmosphere to play in, fired-up players and a fiery crowd.

France actually finessed the first 30 minutes well, and played their football as Antoine Griezmann missed from a point-blank range rebound after a Karim Benzema shot. Benzema then missed himself from inside the box after a slick France move. With Kylian Mbappé running in behind and Griezmann and Pogba frequently finding him France could’ve had a few goals in the opening half an hour, it was their best phase of the game and it didn’t result in a goal.

Hungary scored against the run of play, as the Puskas Arena exploded like a boiling cauldron you can´t keep the lid on. Attila Fiola’s hilarious celebration was an appropriate summation of Hungary’s reaction to the goal, throwing equipment from a broadcaster table like a WWE superstar. The goal came from Benjamin Pavard’s side who didn’t have the best game at all as Hungary targeted the right side constantly motored down the right giving Pavard a headache.

France returned from the 2nd half starting well, but essentially Hungary’s valorous defending frustrated France as Didier Deschamps played all his cards in the 2nd half but they lost creative spark and lacked penetration. France’s equaliser occurred with an old-fashioned root one punt up the pitch from Hugo Lloris that Hungary failed to deal with and allowed Griezmann to score. It was a valiant point earned by Hungary who were well worth the draw.

Man of the Match: Roland Sallai

What impressed me the most about Hungary is the manner in which they fought. We are seeing in this tournament for example with the Slovaks and Scots yesterday, that teams will setup to frustrate and defend deep in a low block. No such thing occurred in Budapest as time and again the Hungarians drove the ball forward motoring down the channels attacking Pavard and Lucas Digne.

No one did this better than Roland Sallai, bringing the ball out constantly lifting pressure on the defence and causing stoppages by smartly winning fouls as he saliently won 6 of them or threatening in attack. As well as providing the assist, like every Hungarian there was dogged determination to defend heroically. 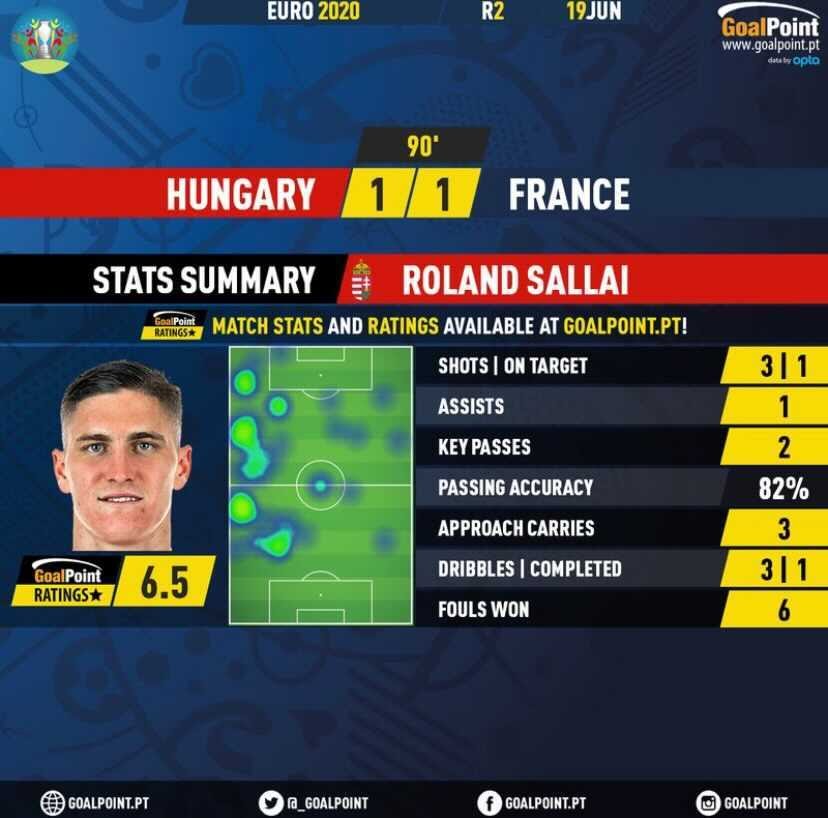 In the absence of Dominik Szoboszlai, Roland Sallai once again stepped up to the task and led Hungary to a crucial point in Budapest.

His heat map tells a story says as the left flank was ran by him being a constant thorn in Pavard’s side. Sallai and the Hungarians were tireless, with his 3 approach carries on the ball you can see how crucial it was for Hungary to have a breather in defence, but Sallai also led the attack to come back at France rather than constantly weather their pressure. As the tournament gets further and deeper, teams may have watched the game today and witnessed where France’s Achilles heel may be, and it was Sallai who showcased the weakness.

Now of course we love to see the stars of the tournament light up matches and play pretty, gorgeous football. But the game was a good reminder of how satisfying it is to see a crowd roaring on a team in unison battling for every blade of grass, with lionhearted defending displaying pride for their country.

France are still bonafide favorites to qualify from the group but Hungary may have shown that they are beatable and can be disturbed with the right approach. The group of death is shaping up fascinatingly, as the draw means if Germany can get a win against Portugal it is all to play for going into the final group game with Portugal on 3 points, Germany on 3 (if they win) and France on 4 with Hungary on 1.

A tantalising blockbuster encounter between France and Portugal looms, initially thought of as a matchup to determine who was going to top the group, the stakes have raised as it could now determine who will qualify between the two teams touted as ´favorites’. Hungary were not given a chance to qualify by anyone, but if they get a result vs Germany they could possibly engineer a great escape in the group of death. Hungary are not pushovers, they have come to spoil the party.

The allure of Karim Benzema’s return to Les Bleus surrounded much of the pre-tournament excitement for the World Champions as they entered Euro 2020 looking to avenge their 2016 heartache. However, in 165 minutes of play across Munich and Budapest, ‘Coco’ hasn’t shown the scintillating form that warranted his recall to the national side.

Lining up alongside Kylian Mbappé, Karim dropped deeper to collect the ball in the pockets of space created throughout by Griezmann’s energetic display. At times his play back to goal was neat and tidy with Digne offering a threat frequently and Mbappé’s darting runs beyond him meant Benzema was afforded scope to do something with the ball. He didn’t. 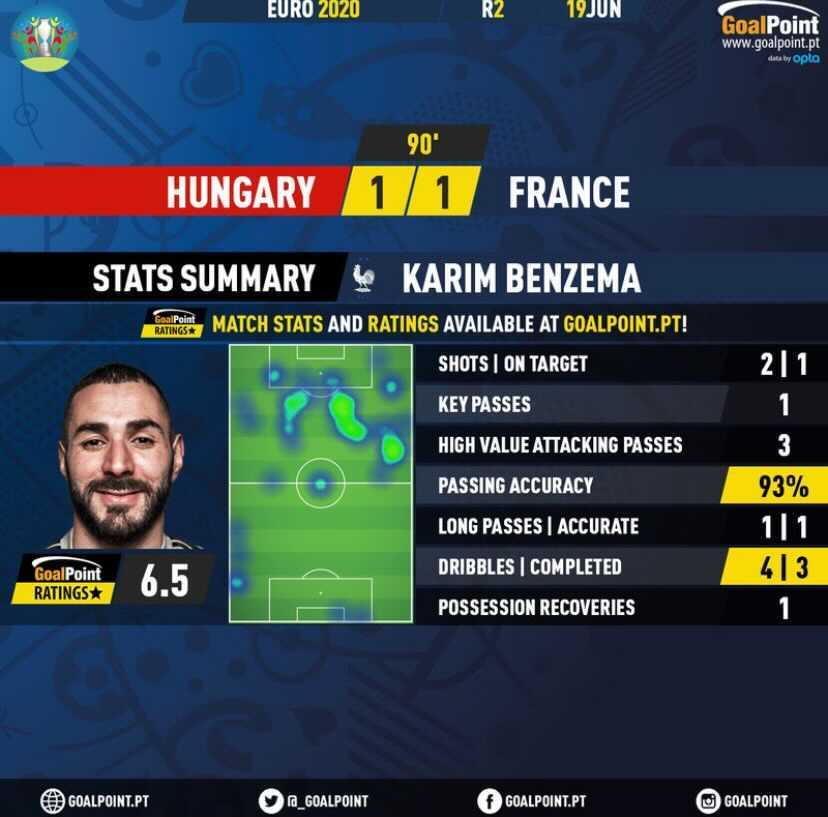 Karim’s return has yet to provide the riches that this French side have been so accustomed with since his departure back in 2015.

The notable missed opportunity for Benzema came after Mbappé superbly flicked it into his path but the man who’s bagged 30 goals this season jolted his effort wide. After the golden opportunity at the 30 minute mark, Karim went missing amongst the shadows of the Puskas Arena until his withdrawal with 11 minutes to play. A display from the Real Madrid hitman that sums up his return to the international stage so far.

Following another performance where Karim failed to deliver like his co-star Kylian Mbappé has or his current understudy Olivier Giroud, his place within the team is likely to come under serious consideration by Deschamps for the Portugal game on Wednesday.

Deschamps’ issue in gelling the forward line is without a doubt scientific and in this case its chemistry. Benzema flourishes when he leads the line as a lone striker (noticeably since superstar CR7 left the capital). Karim’s game is stunted by Mbappé’s stardom; he is the one making the runs beyond, pulling the pants down of the Hungarians – not Karim.

You ask Antoine Griezmann or Paul Pogba who they’re searching for everytime, Kylian Mbappé or Karim Benzema? When Benzema cannot be the focal point of the side, his performances go unnoticed and his game looks largely ineffective as it did today.

Just 5km from the River Danube the jewels of Kanté and Pogba were forecast to run the show in the middle of the park but it was the partnership of Laszlo Kleinheisler and Adam Nagy that emerged as the true treasure of the afternoon. The pair operated in a midfield trio with Andras Schafer and their collective work placed the French stars in shackles all afternoon. 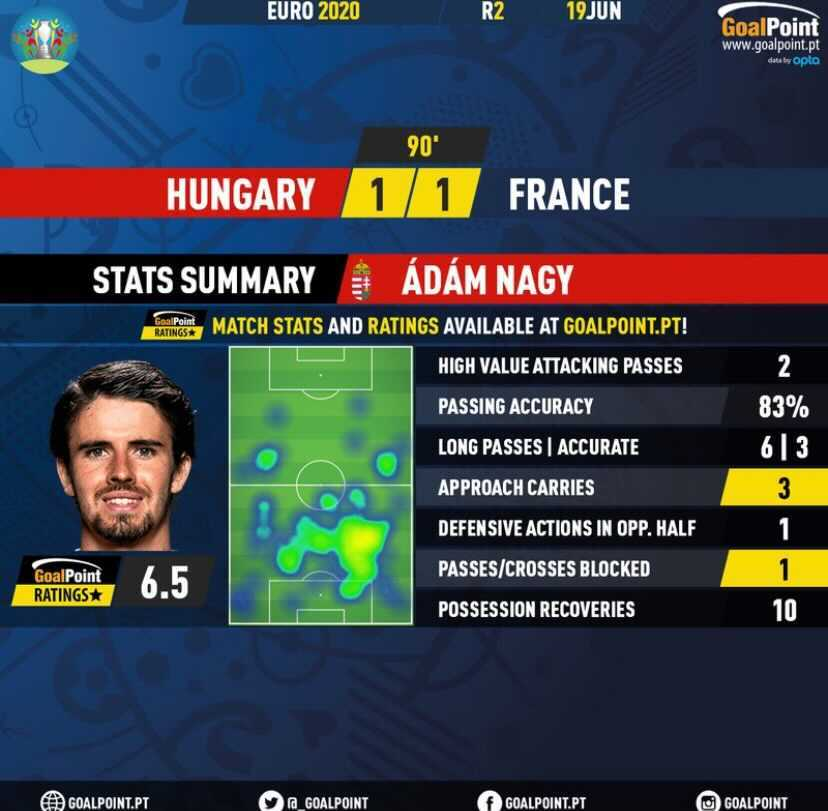 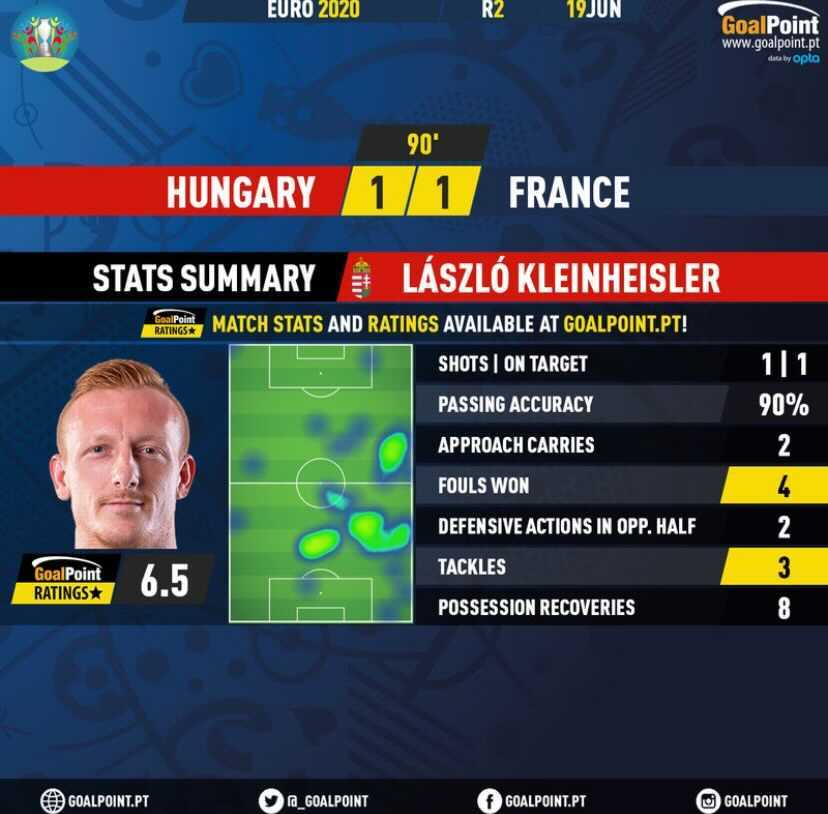 The Hungarian midfield pairing worked tirelessly to keep the luxury of French midfield at bay.

Marco Rossi opted for the tried and tested 3-5-2 in an attempt to play obviously conservative against the World Champions, who wouldn’t? But it is what Kleinheisler did on the break and Nagy in possession that meant the Hungarians flowed like the Danube. The prediction was that Fiola and Nego’s speed on the break would be relied upon as their counter-attacks had to be razor sharp if they were going to come away with something from the game.

For the most part, Fiola did offer surging runs down the left flank but that space was only made available by Kleinheisler’s brashness to take the game too and ultimately through the French midfield. His progression on the ball drove forward the Magyarok as they rode the wave of support coming from 60,000 odd Hungarians inside the Puskas Arena.

The long-range passing and ball carries in the centre from the ‘Hungarian Scholes’ were perfectly complimented by the calmness and comfortable presence of Adam Nagy. On every occasion the Bristol City midfielder kept the Hungarians focused on their approach drilled into them by Marco Rossi and didn’t let them waiver like they did against Portugal.

Nagy had the tempo of the game in his palms and even when the French probed the Hungarian backline he stayed patient to calm it down and allowed his defenders much-needed respite. Rossi’s deployment of Kleinheisler and Nagy as a flawlessly balanced pairing to work in motion against the combination of Kante and Pogba helped them on their way to a famous draw.

Rossi’s identification that Rabiot’s role would be to cover the overlapping Digne rather than act as a catalyst for the Les Blues allowed the blossoming of the Hungarian trio. Therefore in transition, Kleinheisler and Nagy would be able to combat Kanté and Pogba as Schafer could press on their behalf meaning their defensive barricade stayed resolute.

Ultimately, Deschamps’ otherworldly midfield was neutered by the relentlessness of Nagy and Kleinheisler in meticulously sticking to the plans set by the Italian Marco Rossi. It really is the Italians’ tournament.