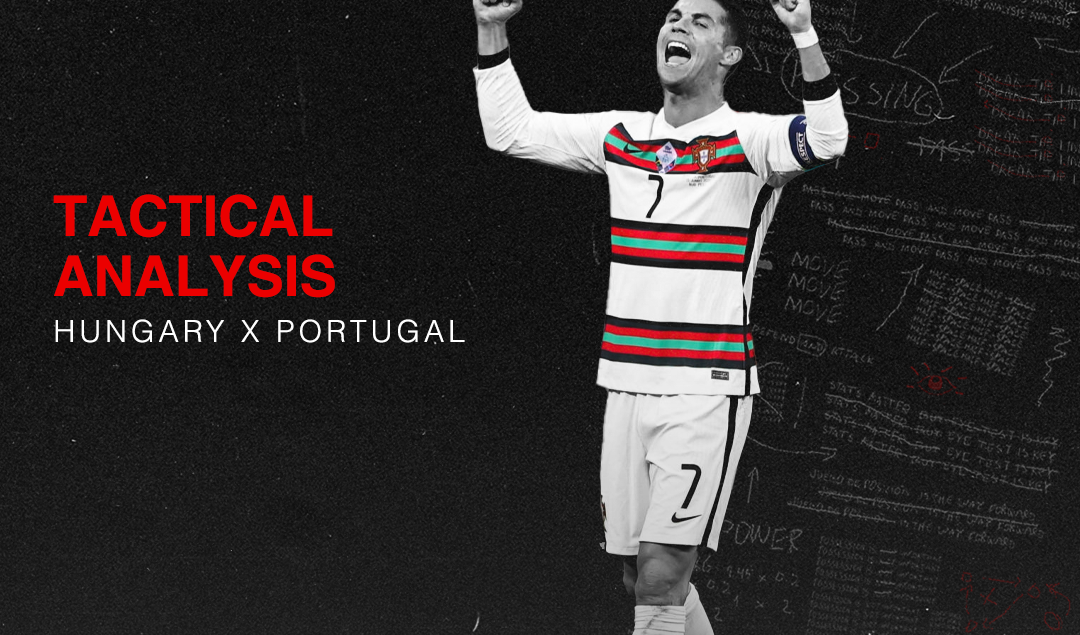 A rare sight in these recent Covid times, the Ferenc Pukas stadium in Budapest saw over 60,000 vociferous Hungarians in attendance, the only venue to be allowed at full capacity during the tournament. However, Portugal grabbed a vital win with three goals in the final ten minutes as Cristiano Ronaldo became the European Championships all-time record goalscorer with his 10th and 11th goals of the competition, overtaking Frenchman Michel Platini’s record of nine.

Marco Rossi’s hosts thought they had claimed a famous victory but Szabolcs Schon saw his goal ruled out for offside by VAR with ten minutes remaining and minutes later Raphael Guerreiro gave Fernando Santos’ side the lead before Ronaldo’s record-breaking feat. Ronaldo will have another record in his sights as, with 106 international goals, he is just four goals away from overtaking Israel’s Ali Daei as the all-time men’s international goalscorer.

Despite being frustrated for the majority of the encounter, it was the perfect start for the defending champions as they aim to become only the second team after Spain in 2012 to defend their title. It was a disappointing end to the match for Hungary, with their players, buoyed by the atmosphere in only their second match at the venue, came close to an unlikely point in their first outing in the so-called group of death, with Germany and France also to come.

Man of the Match: Peter Gulacsi

The Hungary goalkeeper Peter Gulasci looked to have earned his side a surprise point with a string of saves, denying Diogo Jota twice in the first-half and Pepe and Fernandes in the second. He made four saves including one close range shot from Jota shortly before half-time as he was on course for the clean sheet his performance deserved. 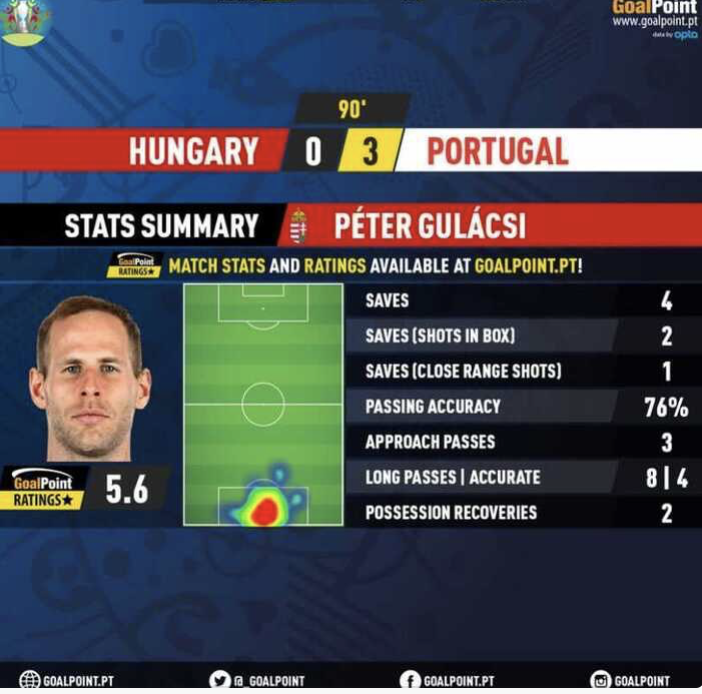 Going up against a star-studded attack featuring the likes of Cristiano Ronaldo and Bernardo Silva, Peter Gulacsi held his own and kept his side in the match through 84 minutes until Portugal finally broke the deadlock via Raphael Guerreiro’s opener.

The Leipzig shot-stopper was making his first appearance at a major tournament for Hungary, having been selected for Euro 2016 but not making an appearance with manager Bernd Storck preferring the experience of the tracksuit-wearing former Crystal Palace goalkeeper Gabor Kiraly.

However, he could do nothing about the goals, with Guerreiro’s shot taking a deflection off the defender Willi Orban and then his Leipzig teammate clumsily bundled over Rafa Silva for a penalty which Ronaldo dispatched. A great team move then saw Ronaldo take the ball around the helpless goalkeeper for the third.

A similar performance will be required against Germany and France who boast the likes of Thomas Muller, Kylian Mbappe and Karim Benzema. The 31-year-old will take heart from his display, showing why he was one of the best goalkeepers in the Bundesliga last season.

For Hungary, this result will not alter their approach with games against Germany and France and striker Adam Szalai held up play well and used his experience to earn free-kicks allowing his defence relief from the constant pressure while Roland Sallai looked a threat on the counter. Given how close they came to an excellent result, Rossi can be happy with his side in setting out to frustrate Portugal and will be able to count on their impressive support when they face France.

Portugal could not afford to drop points and they could actually benefit from more open matches against Germany and France as they struggled to create chances. Having the experience of playing in such an atmosphere after so long with limited attendances will stand them in good stead for their match against Germany in Munich on Saturday.

Heading into Euro 2020, Portugal had failed to win their last 5 opening matches in a major tournament, a major cause for concern this time around as the Seleção faced Group E’s weakest opponents Hungary in the opening fixture.

Fearing the 6th rendition of an early tournament disappointment, Fernando Santos lined up in a very defensive 4-2-3-1. At the base of this midfield were not silky technicians or powerful runners in possession, but two battering ram midfielders, with PSG’s Danilo Pereira on the left, and Real Betis’ William Carvalho on the right. 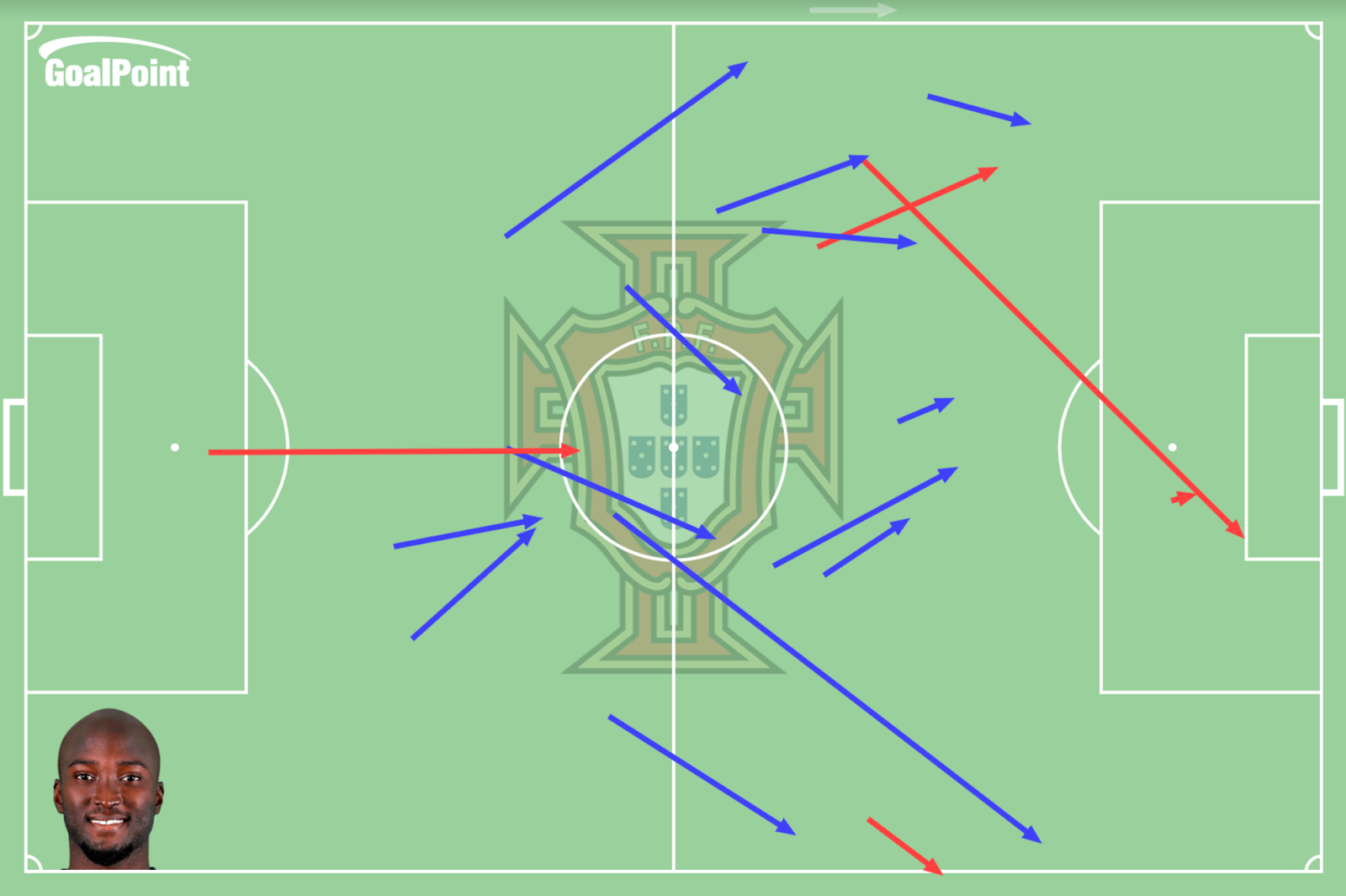 Danilo Pereira was a prime example of Portugal’s creative inefficiencies in their Euro 2020 opener. As his progressive pass map shows, few of his attacking passes were completed in central areas around the opposition goal, often opting for the safer option out wide where no direct goalscoring opportunity could be created.

As expected, the midfield duo were imposing in their defensive duties, winning a combined 6 out of 7 tackles they attempted, and hovering at or around the 90% mark for pass completion. This, however, was not what was needed against a deep-lying Hungary side who were more than happy to take a 0:0 draw.

With few vertical passes, 0 shots, and just the 1 key pass between them, the 29-year old duo offered little to nothing in ball progression, failing to find the feet of Portugal’s most efficient attacking creators; Bruno Fernandes & Cristiano Ronaldo centrally.

Whilst they were effective at transitioning the point of attack and shifting Marco Rossi’s defensive line with ranging long-range passes to either flank, the effectiveness of either winger on the day meant a more centralized approach would have seen Portugal flourish.

Instead of the two traditional holding midfielders, Santos opted for on the night, a player like Renato Sanches would have been more suited to begin the match. Willing to run with the ball in possession, and look for vertical passes into the feet of Portugal’s danger men, the European Championship’s reigning young player of the tournament could have presented the perfect anecdote to crack this stoic Hungarian defense

Sanches did finally come on with 10 minutes to go, and the game flipped on its head, going from a 0:0, to a resounding 3:0 victory (the joint highest scoreline gap in the tournament so far). Whilst Portugal’s late revival can’t solely be put down to the Lille midfielder, his energy and appetite to go forward was clearly something Portugal lacked in the opening 80 minutes, and needed to salvage the victory. Santos was given a lifeline in the opening fixture, but a similarly poor tactical decision in the coming matches against France & Germany will not go unpunished.