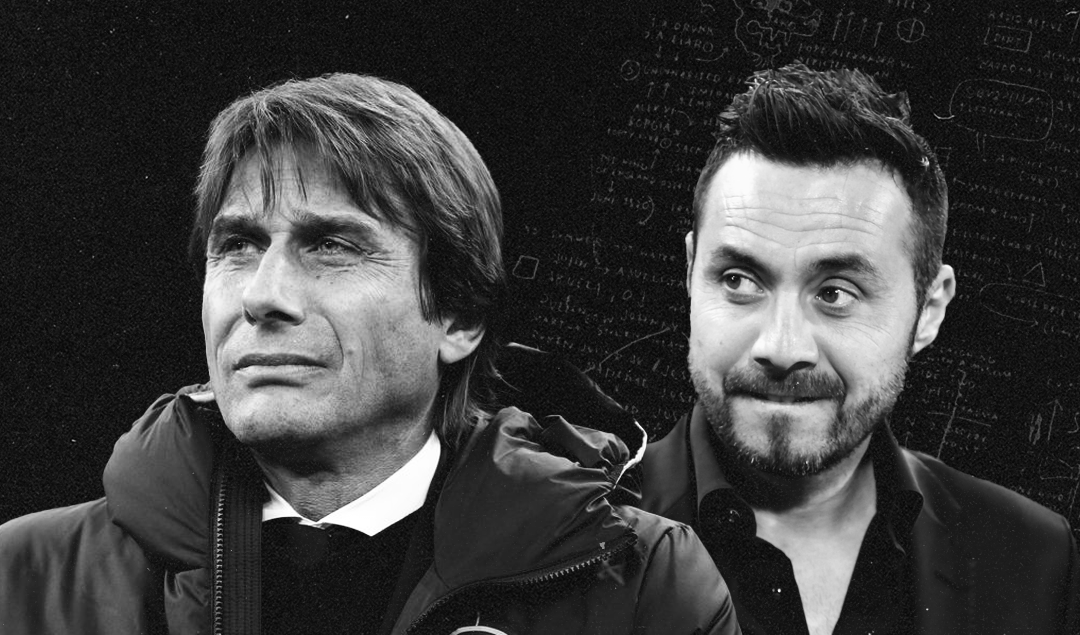 Since Sassuolo’s promotion to Serie A ahead of the 2013-14 season, only Juventus have beaten Inter Milan more times than the Neroverdi. With Antonio Conte’s Nerazzurri hanging onto their Scudetto hopes by a string they would have been hoping to do a professional job on their bogey team, but it was more points dropped when Roberto De Zerbi’s side rocked up to The San Siro on Wednesday night.

This tactical analysis will take a look at how the match unfolded, with particular focus on Sassuolo’s beautiful possession football and their innovative use of full-backs.

Both sides lined up in their usual formations. Inter played with a 3-5-2 (or a 3-4-1-2 accounting for Christian Eriksen’s AM role), while Roberto De Zerbi and Sassuolo stuck with the 4-2-3-1 that has been almost ever-present this season. The two sides did, however, make a number of personnel alterations from their respective Serie A returns on Sunday.

Inter made five changes from their 2-1 defeat of Sampdoria – the veteran Andrea Ranocchia replaced Stefan de Vrij in the centre of Conte’s back three, while Victor Moses and Cristiano Biraghi replaced Antonio Candreva and Ashley Young on the flanks. Borja Valero and Alexis Sánchez were favoured over Nicolò Barella and Lautaro Martinez respectively.

For Sassuolo, goalkeeper Andrea Consigli and the front three, Jérémie Boga, Francesco Caputo and Domenico Berardi were the only four players to keep their places from a 4-1 loss at Atalanta’s Gewiss Stadium.

Conte and De Zerbi made good use of their five substitution allowance, though. With the likes of de Vrij and Lautaro on for Inter and Manuel Locatelli on for Sassuolo, both sides were arguably stronger during the second half than they were at the start of the game.

Early on, Inter looked to match Sassuolo’s 2-2 shape in the build-up phase with two forwards matched up against the two centre-backs, while Valero and Eriksen paid close attention to the double-pivot of Obiang and Magnanelli.

A potential solution to this for De Zerbi might have been dropping one of the pivot players, most suitably Francesco Magnanelli, into a back three. This would have created a predicament for Inter in that they’d have been forced to choose between gifting Sassuolo the 3v2 numerical superiority at the back, or pushing Christian Eriksen high up the pitch and leaving a huge space in between the lines for the likes of Đuričić to drop into.

De Zerbi, however, declined this option and turned to something more creative. See below as Sassuolo’s full-backs sit next to the double-pivot on a flat line of four, deep, and in Rogério’s case, central, to rid Inter’s wing-backs of the temptation to press.

Inter’s forwards formed cover shadows so as to shut off direct circulation to the full-backs, but it was easy enough for Sassuolo to work around this, metaphorically and literally, with in this instance Magnanelli serving as the link player and finding Mert Müldür with a one-touch pass.

This action served as the trigger for an aggressive Inter press that would ultimately prove to be suicidal. Müldür being the free man, Cristiano Biraghi jumped forward from left-back and Marcelo Brozović vacated his DM position, looking to scare the Turk into playing a backwards pass.

Müldür stayed cool, though. He took two neat touches into the middle to escape Biraghi before calmly slotting the ball through to Đuričić, who had dropped to invade Brozović’s vacated space in between the lines.

It is important to note the position of CF Francesco Caputo (circled) here. The former Empoli man has also dropped, in order to drag Alessandro Bastoni out of the defensive line, but is primed to dart straight past Bastoni (see respective body orientations) as Müldür’s pass travels towards Đuričić.

Caputo could have stayed in his spot and waited for the ball but was proactive and freed space in an area that he would eventually invade to score.

With Bastoni beaten by Caputo, Inter’s young centre-back instead turned his attention towards stopping the free and onrushing Đuričić, but could not do enough to stop the Serb from slotting through Sassuolo’s top scorer for his 14th goal of the season.

Sassuolo dominated the first half with their neat passing combinations but Inter drew level on 40 minutes following a nice move of their own.

After a period of sustained possession, Roberto Gagliardini switched the play towards right-wing back Victor Moses, which we can see has dragged Sassuolo’s left-back Rogério wide and generated a large space in the channel.

It would have been smart for Inter to deploy a runner into said space, while Gagliardini’s pass travelled to Moses. Switch passes are similar in nature. They will almost always generate this space in between the full-back, stretched wide to pressure the receiver, and the ball-side centre-back. It makes sense to capitalise before the defenders have time to react.

Nevertheless, we can see below that once Moses has received the ball, centre-back Milan Škriniar looks to make the underlapping run into this gap. Moses finds Eriksen inside who plays the pass through to third-man runner Škriniar, tracked into the box by Boga but brought down for a penalty that Romelu Lukaku would convert.

Sassuolo’s Use of Fullbacks as Runners

Sassuolo’s most recognisable automatism (an action or short sequence of actions that is eventually performed without conscious thought after regular repetition) is one that involves a quick passing combination out wide.

Their fullback will lay the ball off to a player in front of him, either the ball-side winger or attacking midfielder, and immediately make a penetrating forward run with view to receiving from a 1-2 or as the third man after an extra pass.

This works well because the opposing player closest to the fullback is naturally drawn to the ball after the pass, allowing the fullback to sprint forward on his blindside and become a free man in a dangerous position.

However, the downside of using automatisms in an age of thorough video analysis is that repeated patterns of play can be easy to highlight and strategize against. In Sassuolo’s previous game against Atalanta, their attempts to put together these wide combinations were largely thwarted.

Atalanta knew that the fullback to winger/attacking midfielder pass was a trigger for the fullback to make a penetrating forward run and therefore, instead of being intuitively drawn to the ball, knew to follow their man and jam Sassuolo out wide with no obvious out-ball.

It is likely that Roberto De Zerbi and his team evaluated Atalanta’s approach to dealing with the move and concluded that Sassuolo should be more careful moving forward, particularly in deep areas.

In this match against Inter Milan, whenever Sassuolo’s full-backs received the ball deep, the wingers would rarely drop. Müldür and Rogério mostly looked inside towards the double-pivot or direct towards Đuričić and Caputo up front.

There were a few occasions in the match in which Sassuolo used one of the full-backs as a runner but the preference was for this tactic to be utilised in the second and third phase, where risks are lesser and rewards are higher.

See as Rogério lays the ball forward to Boga and immediately begins his dart forwards. Boga finds Filip Đuričić dropping into the left half-space, which draws Milan Škriniar out of Inter’s defensive line and leaves space for Rogério to invade with his third man run.

A further move on 80 minutes led to the first of Sassuolo’s late equalisers. See as Müldür lays the ball off to Đuričić in the right half-space, who plays a quick one-touch pass back to his onrushing full-back. The result is Müldür surging into the box before being hacked down by Ashley Young. Domenico Berardi would convert from the penalty spot to level the match at 2-2.

Berardi’s goal was far from the last of the action. Inter looked to have won the match on 86 minutes, when Borja Valero ghosted in at the back post to tap home from a free-kick. But Sassuolo fired back with the equaliser on 89 minutes, through substitute centre-back Giangiacomo Magnani.

Both goals were, without over-explanation, examples of terrible marking from set-pieces. See below as Grégoire Defrel allows Valero to get goal-side of him.

Similarly, see during the second phase of a corner, as Inter’s young midfielder Lucien Agoumé loses track of Magnani ghosting in behind him for the tap-in.

Roberto De Zerbi is a coach that likes to dominate the ball, so while his players will make mistakes and leave themselves vulnerable in transition, they are pushing themselves to new levels and becoming better footballers every day.

His use of the full-backs, inverted at times to create numerical overloads, high at times to take advantage of space vacated by low movement from the forwards, has been particularly notable and was on show for all to see in this game, which ended 3-3.

A progressive side that continue to learn and develop, it doesn’t feel beyond the realm of possibility that Sassuolo might, in years to come, prove to far exceed what has been achieved in this season’s mid-table campaign.

As for Inter, they’ll be without Milan Škriniar for their game against Parma on Sunday, who was shown a second yellow card in the dying seconds of the match. Now all but out of the Scudetto race, their eyes possibly turn to next season where Antonio Conte will once again look to put an end to the Juventus dynasty he helped kickstart.