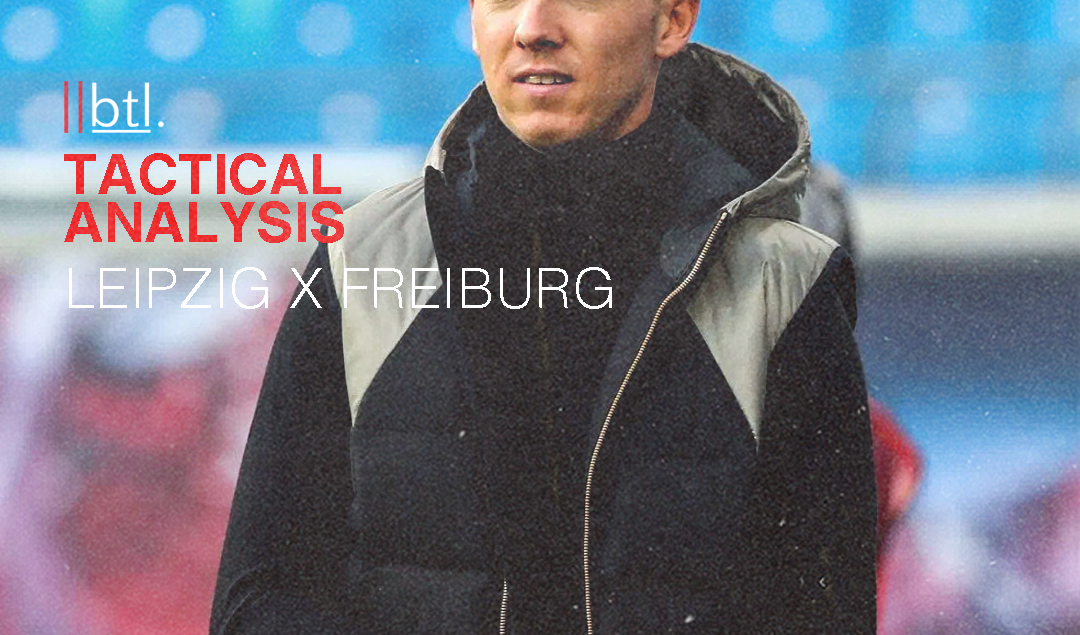 With the Bundesliga resuming this week after a two month break, RB Leipzig took upon Freiburg at the Red Bull Arena. Both sides lined up in a 3-4-3 formation, but Leipzig’s shape on the ball kept changing throughout the game.

Leipzig came into the game as favourites and had to win the game to close the gap with league leaders Bayern, while Freiburg were happy to sit back and soak up the pressure and take anything from the game. This was manifested throughout the match, with Leipzig dominating possession with 61%, trying their all to break through Freiburg’s compact low block. Below is my analysis of the game from a tactical perspective.

Freiburg’s Issues in the Build-up and Leipzig Pressing Structure

During the initial stages of the match, Freiburg tried to play out from the back but were largely unsuccessful in doing so. This was down to Leipzig’s pressing structure, which instead of deploying an intense man-oriented press, preferred to block central passing lanes and funnel the play out wide and then begin their press.

In the image below, Leipzig allow Freiburg centre backs time and space on the ball, but take out there central passing option. 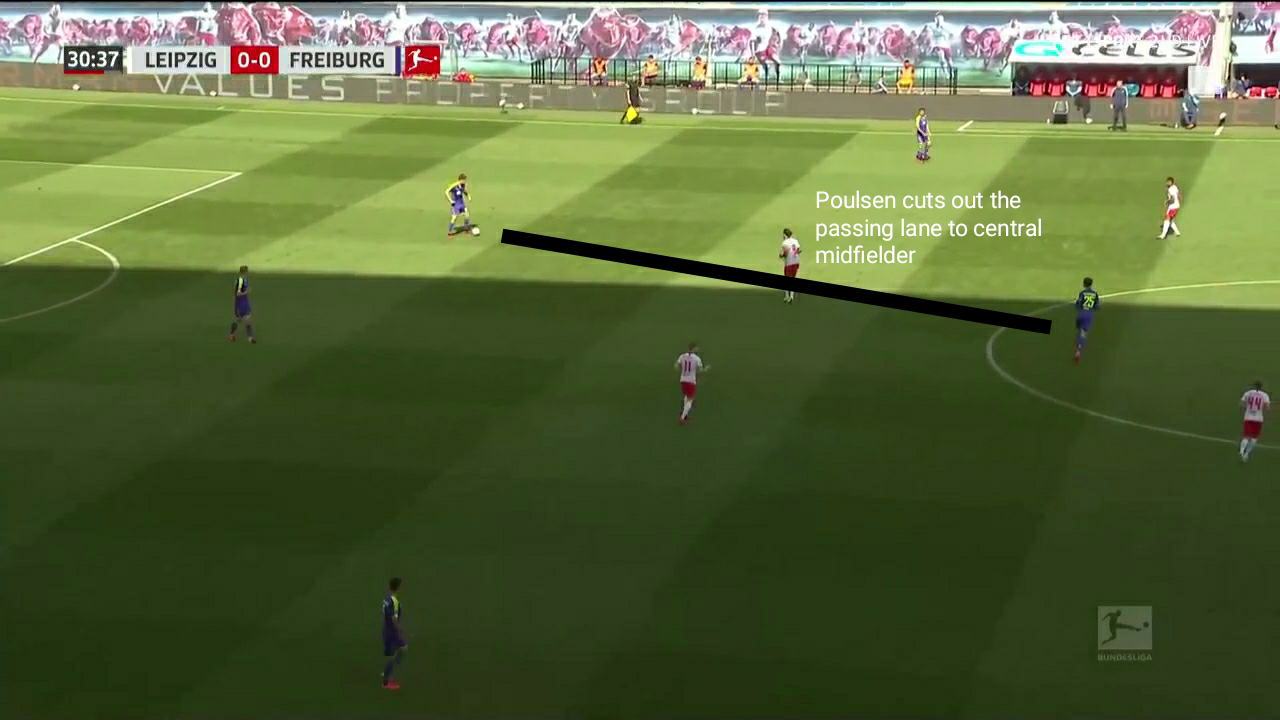 This forced Freiburg to play out wide, which triggered the press from Leipzig, limiting time and space on the ball for the player out wide, whose passing options were already limited due to the touchline, and thus forcing him to go long or play a backward pass. Freiburg’s long balls were often wasteful, as Leipzig’s center backs were able to comfortably win the physical duels and regain possession. 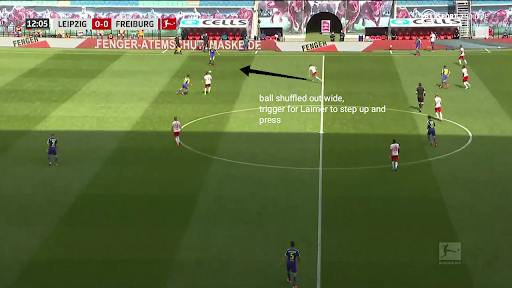 Freiburg tried dropping one of their central midfielders to make a makeshift back four and progress the ball, but it hardly helped as they still struggled to make a clean ball progression. In general, Freiburg caused little to no problems on the ball for Leipzig.

As opposed to Freiburg, Leipzig were a lot more innovative and imaginative in their build-up, and as a result, were able to progress the ball with a lot more ease. In this scenario, Lukas Klostermann, the middle center back, pushes up alongside Konrad Laimer to form a double pivot. The wide center backs, Nordi Mukiele and Marcel Halstenberg, split on either side of the goalkeeper, as Leipzig’s wingbacks remain deep. 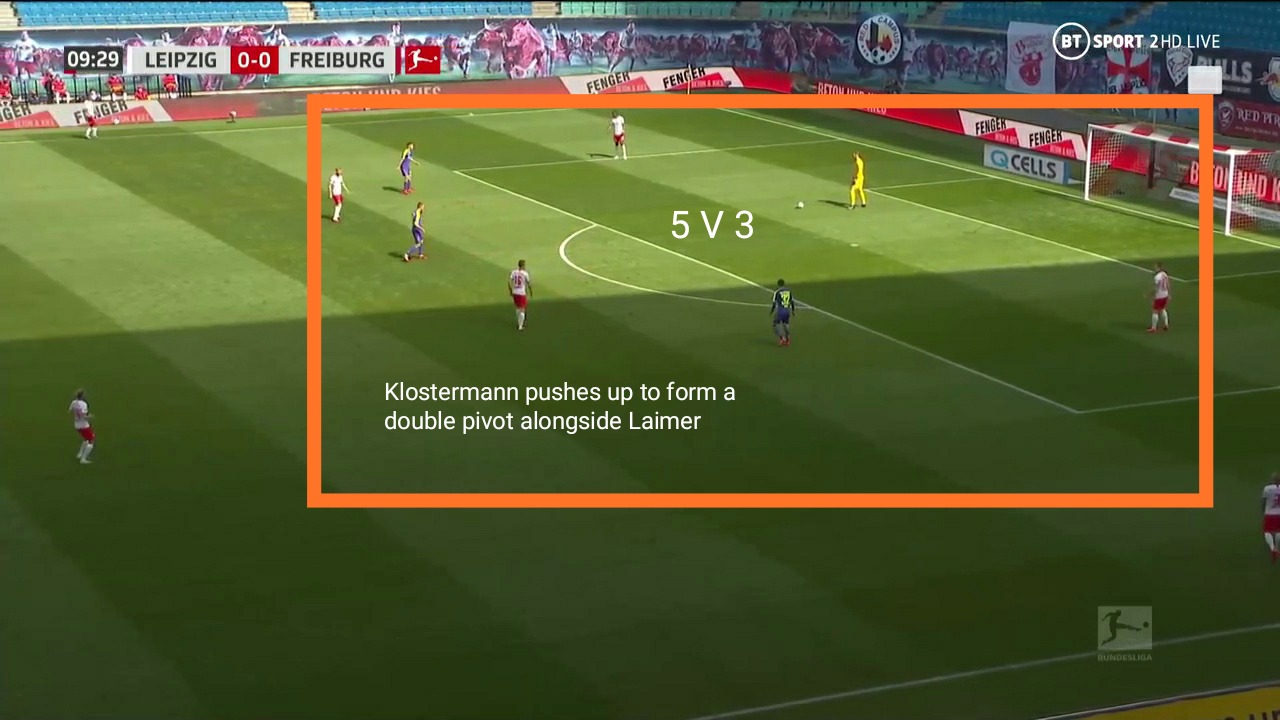 If the Freiburg striker, Nils Petersen in this case, presses the goalkeeper, it leaves one or the other central passing lane open to the double pivot, facilitated by the Leipzig’s goalkeeper’s (Péter Gulácsi) ability to play short passes in the smallest of spaces. 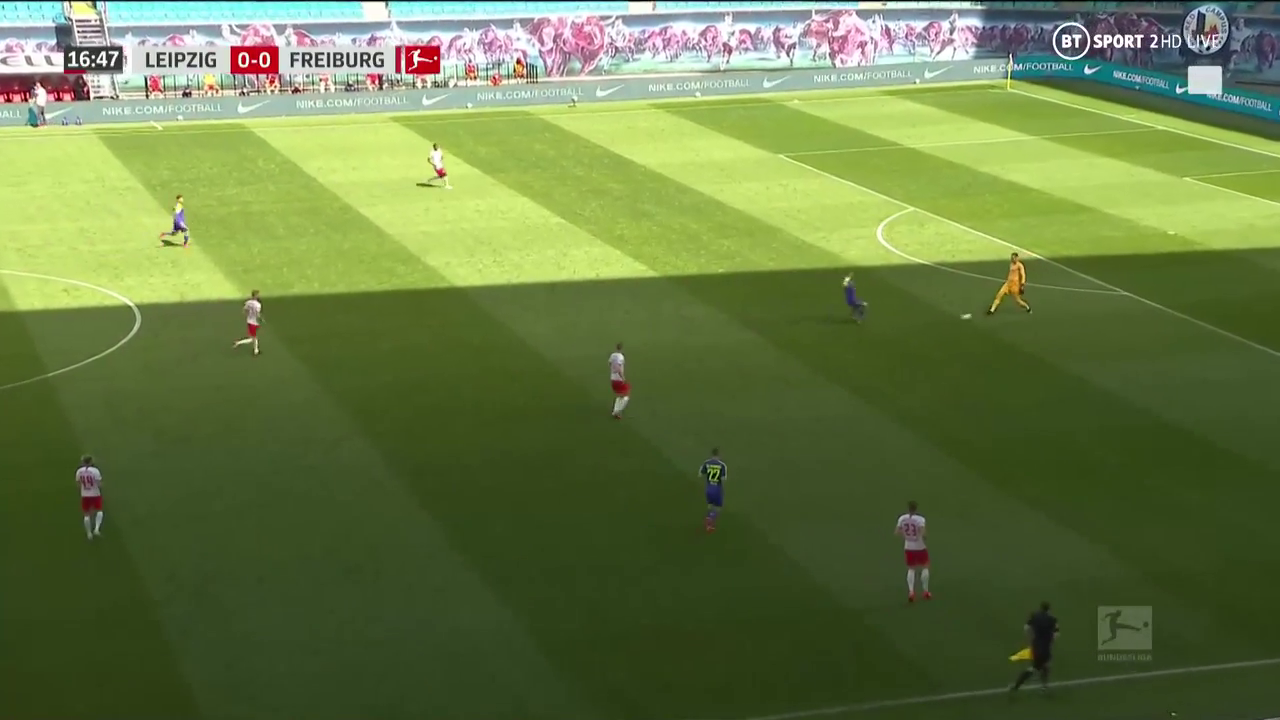 If the passing lane to the double pivot is covered, then it would lend time and space to the centre backs to progress the play, due to them not being pressed. However, if they are pressed by Freiburg’s wide forwards, they can still find the double pivot by using the near side wingback as a ‘link-player.’ 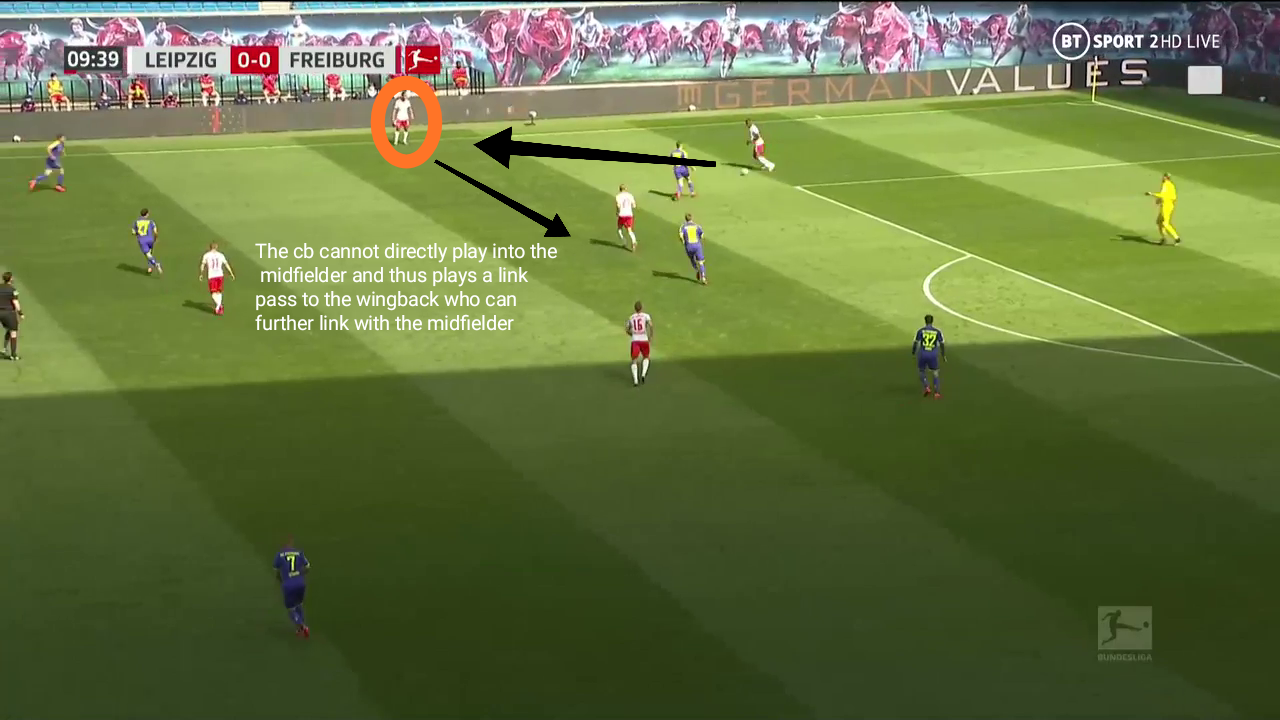 Julian Nagelsmann always puts plenty of emphasis on fast vertical progression in between the lines, with players combining with each other to progress the ball into the final third, and this game was no different.
In this case, Leipzig created a 3v2 overload in midfield, with Timo Werner and Christophe Nkunku dropping from the forward line.

Here, Kevin Kampl and Nkunku position themselves in the half-spaces, thus stretching Freiburg’s midfield and creating space for Werner to drop into. Thanks to Leipzig’s narrow attacking shape, whenever they lose the ball in between the lines, they respond by intensely counter-pressing, often resulting in Leipzig winning the ball back quickly and nullifying any potential counterattack. 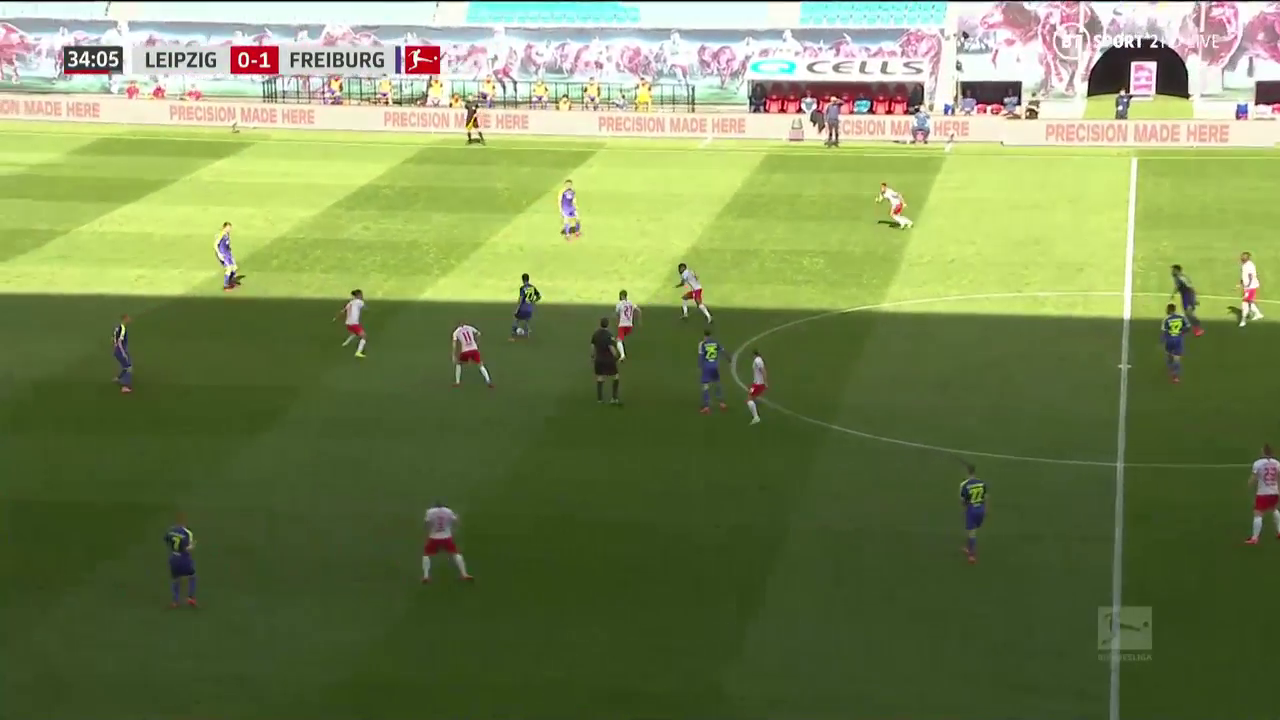 In order to counteract Leipzig’s midfield overload, one of Freiburg’s wide center backs would step up (depending on which side the ball was) and close down the space. 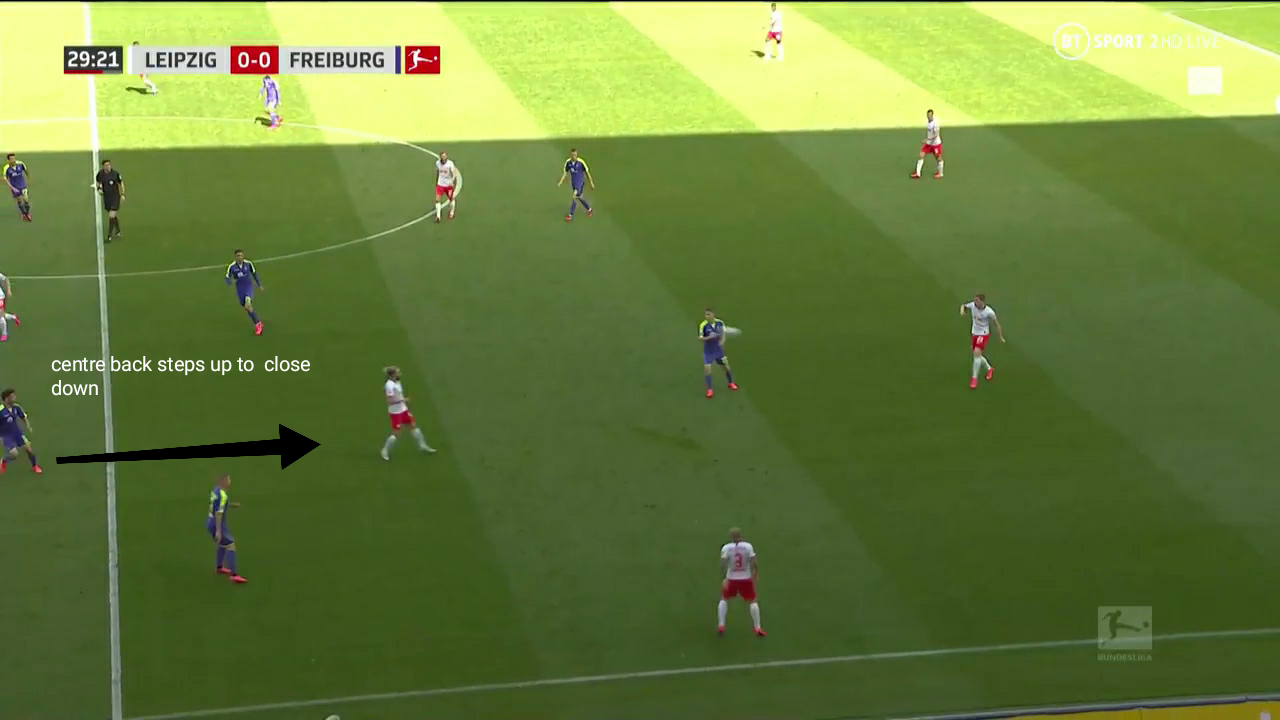 Manuel Gulde, who scored Freiburg’s opening goal, steps up to press Kampl, and Leipzig exploit this by creating a great chance, with Yussuf Poulsen making a run into the empty space from Gulde’s pressing. They were unfortunate not to score, a common theme from the match, but Poulsen ended up saving Leipzig’s blushes with a late equalizer. 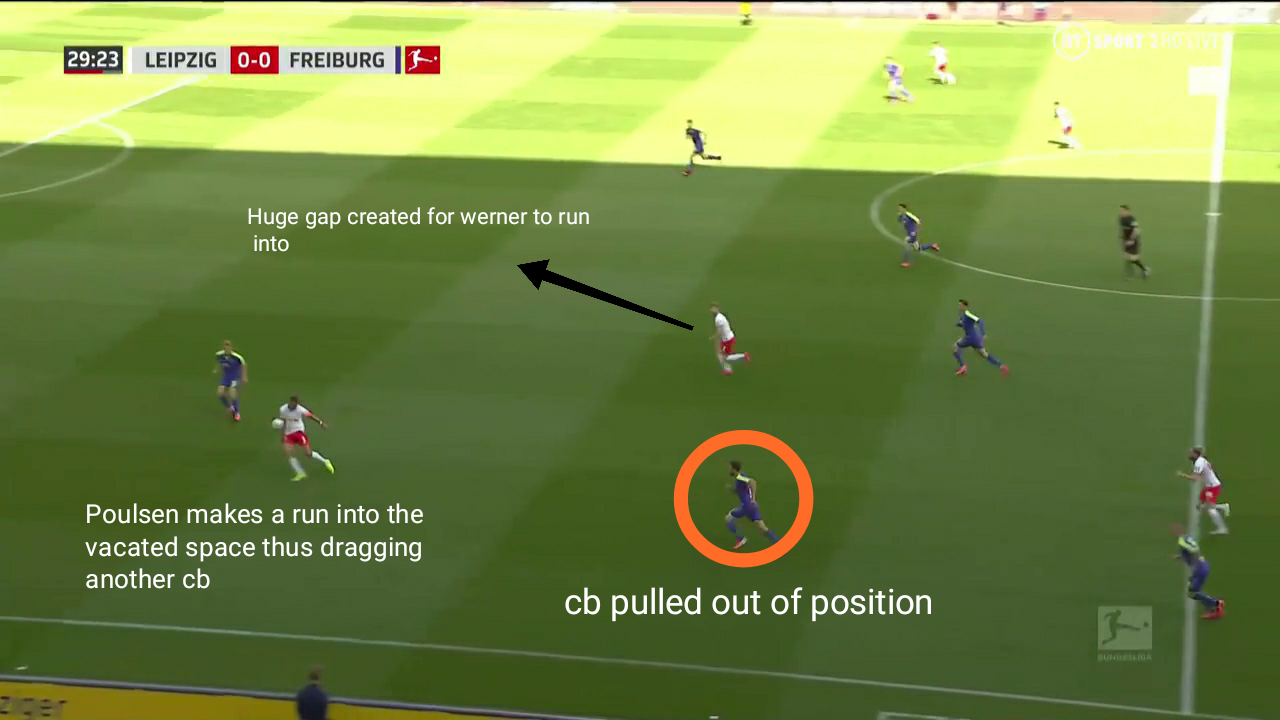 Leipzig’s Struggles in the Second Half

Despite their dominance in the first half, Leipzig found themselves trailing at halftime due to a set-piece goal scored by Gulde. Nagelsmann was quick to react and immediately brought on Ademola Lookman for Mukiele, thus switching from a 3-4-3 to a 4-4-2 formation. Freiburg, on the other hand, put every man behind the ball and tried to soak up every bit of pressure.

With Freiburg sitting deep and congesting the central zones, Leipzig were forced to progress the ball via wide areas, which they struggled to do given their narrow shape. While they still created goalscoring opportunities whenever they won the ball back in advanced areas, their finishing always late them down. 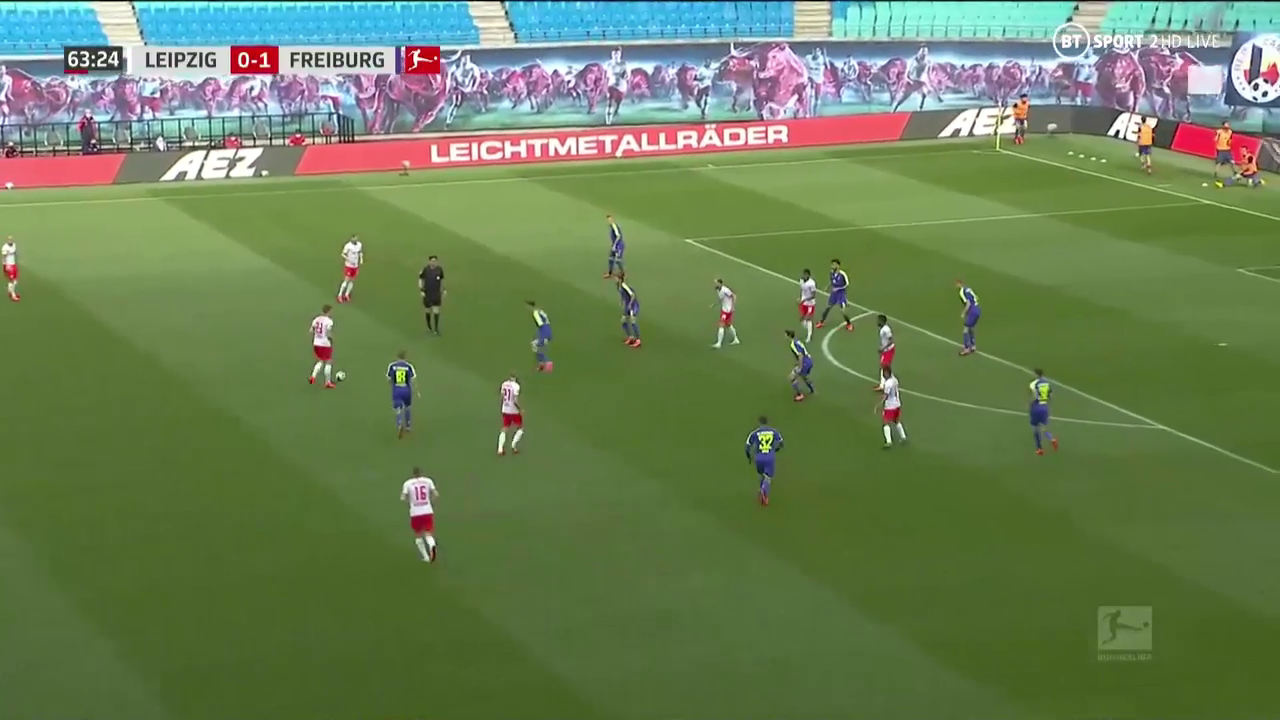 In search of an equalizer, Leipzig eventually ditched their normal course of play and instead went for a more direct approach, playing long balls and crosses to Poulsen. Their equalizer came from this approach, with Kampl putting in a cross from the left half-space for Poulsen to head home.

The game ended 1-1 at the end, but the result did not reflect the performances of both sides, with Leipzig completely dominating possession. Nagelsmann’s side dropped two points and slipped further back in the title race, whilst Christian Streich’s Freiburg earned a crucial point that will them in their fight for the Europa League spots. On the other hand, Leipzig dropped two crucial points and thus slipping further back in the title race.