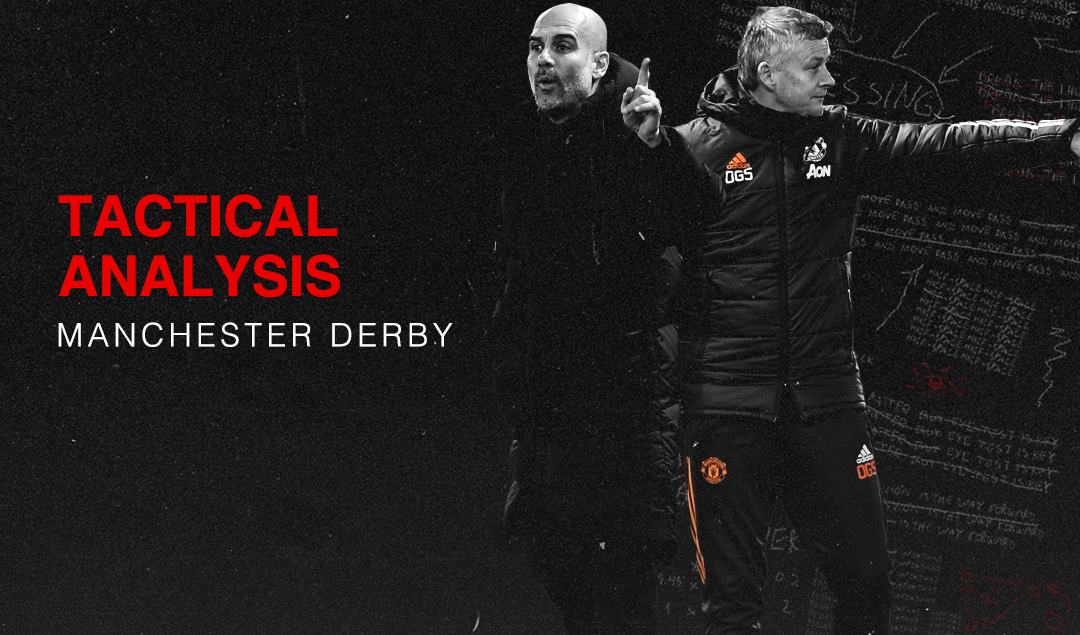 The Manchester Derby on Saturday ended in a stalemate, with neither side being able to find the back of the net. This was only the fourth occasion that the two sides have faced and the end result has been goalless since 2005.

Manchester City manager Pep Guardiola was conservative in his approach to the match after United secured the league double over City last season, while Ole Gunnar Solskjaer was desperate to not lose this match after crashing out of the Champions League just four days earlier. This tactical analysis will be looking into the tactics deployed by both managers and will be using graphics and statistics to provide weight to the points made throughout the analysis.

The immediate surprise within either sides line-ups was the inclusion of Paul Pogba following Mino Raiola’s comments before the RB Leipzig match mid-week. It was even more of a surprise to see that he was not a part of a midfield diamond and was, in fact, operating on the left-wing, which played an important part of the match – especially in the first half – this will be further analysed later.

The rest of the United line-up was not surprising. Solskjaer stuck with his big game midfield of Scott McTominay and Fred, while Luke Shaw was preferred to Alex Telles – one indicator that United were looking to be defensively strong in this contest.

Manchester City also chose a rather conservative line-up with the double pivot of Fernandinho and Rodri. Riyad Mahrez was the preferred option on the right wing and Raheem Sterling started the match – even though he has a dire record against The Reds. 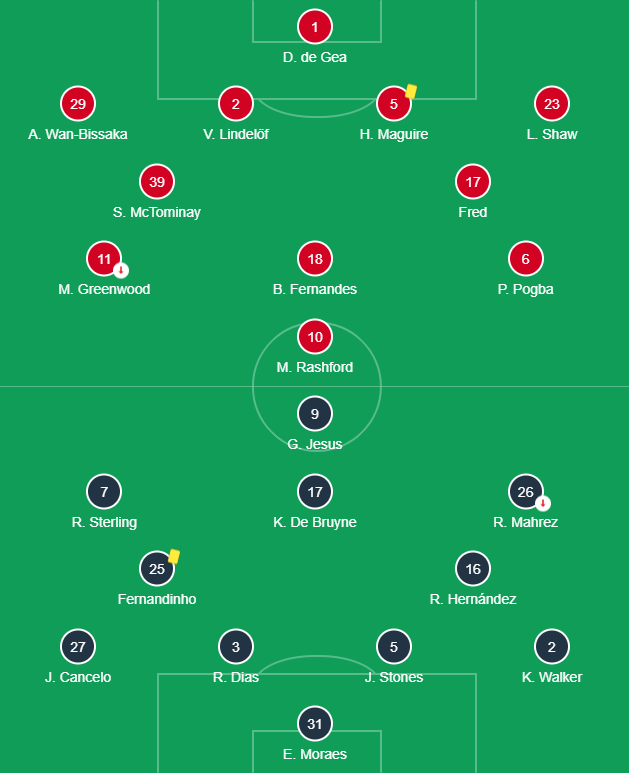 Manchester United’s Press and Solid Shape Out of Possession

On Tuesday, Man United conceded two early goals against Leipzig, where their press and defensive shape was massively taken advantage of. Improvement in this aspect was a clear aim in this match and this side was successful.

When United pressed City in their own third, they worked as a team and also had intensity in their press which is what they have not had when pressing beforehand. The wingers, Pogba and Mason Greenwood both had a responsibility to cover the wide areas and to help their full-backs in defence. Having Pogba on the left also meant that a switch from left to right would not be effective for City as the Frenchman is superior in the air against Kyle Walker. 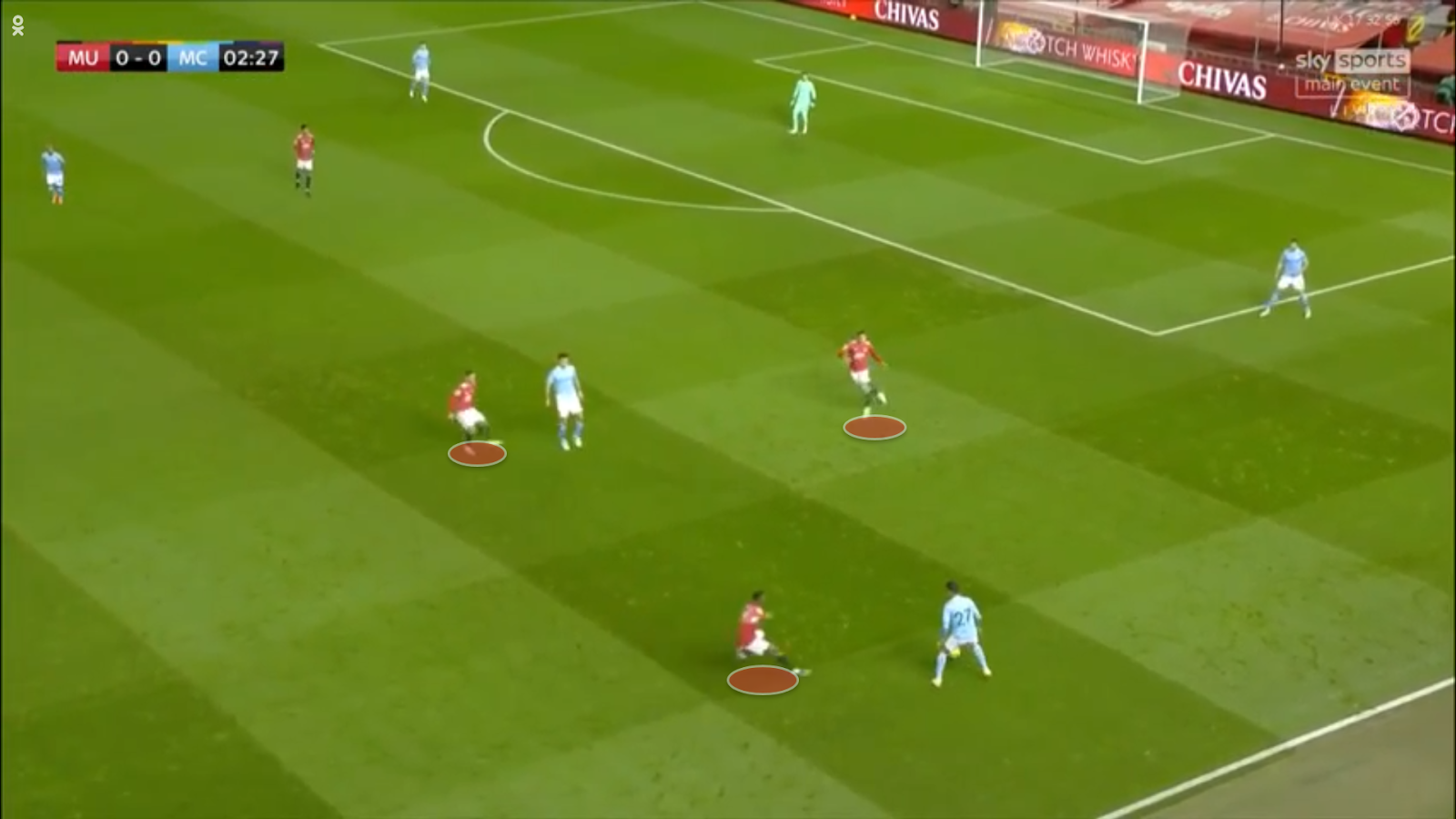 United implemented a press when City passed to João Cancelo on their left. Aaron Wan-Bissaka pressed high, as did Shaw when the ball was on the opposite side. Bruno Fernandes pressed the near option to Rodri and Greenwood stopped the pass back to Ederson. This meant that the only two options were a pass back to John Stones or a switch across to City’s right – he attempted the latter and as shown below, Pogba is able to win the ball and turnover possession. 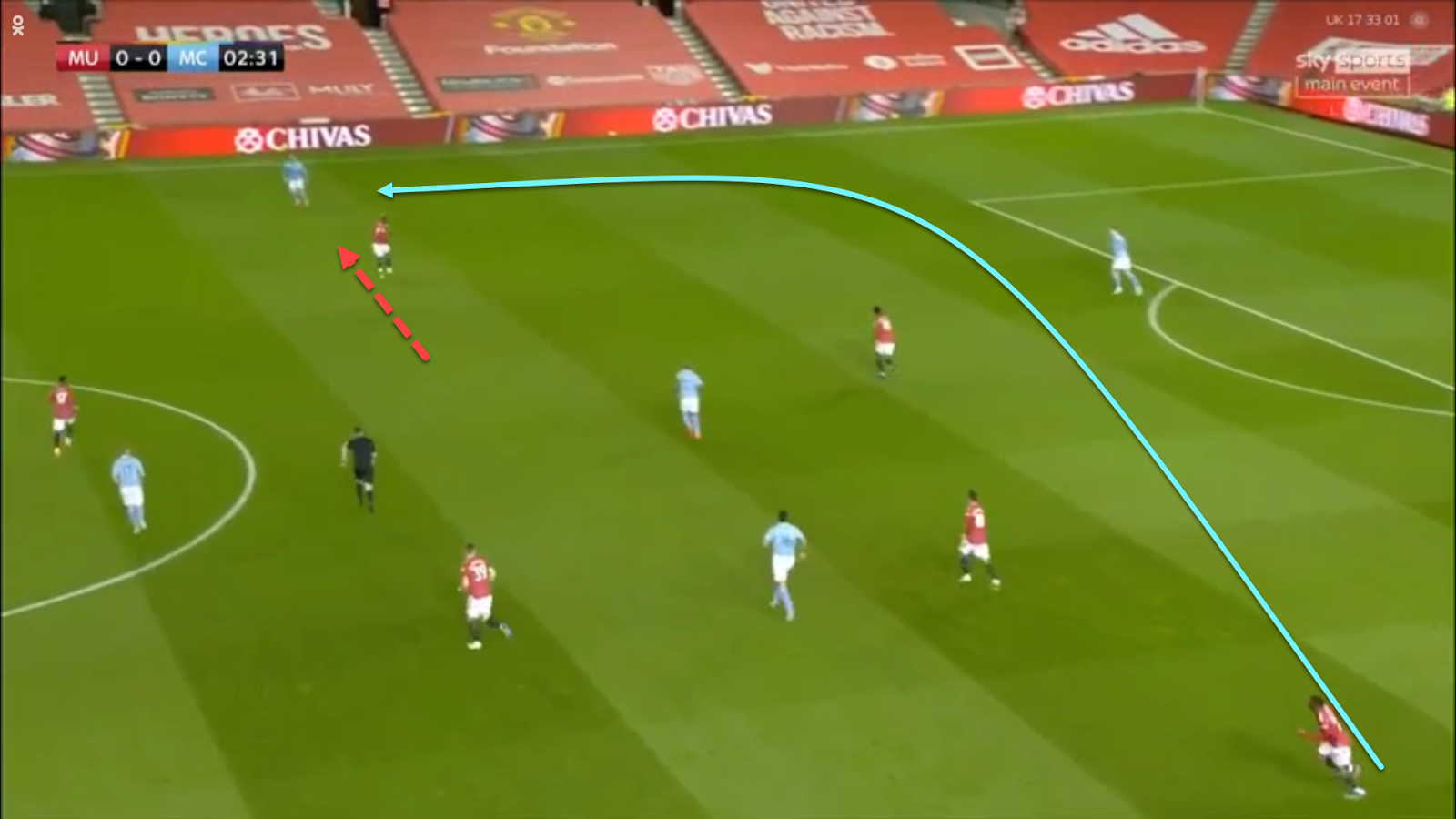 United also created a couple of chances due to the positions of Fernandes, Pogba and Greenwood in City’s first phase build-up, the two wide men did not start very wide and all three of them were aware of the City pass into the pivots in the half-space. Due to poor passing from City in their build-up and this anticipation, United were able to win the ball in advanced areas multiple times but were unable to take full advantage of this. 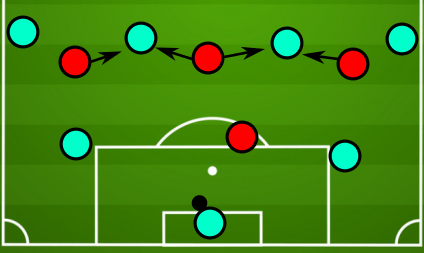 Most of the time though, United did not press City in their third and operated in a 4-4-2 mid-block, with Fernandes moving into the forward line with Marcus Rashford, while Pogba and Greenwood dropped into the midfield line. 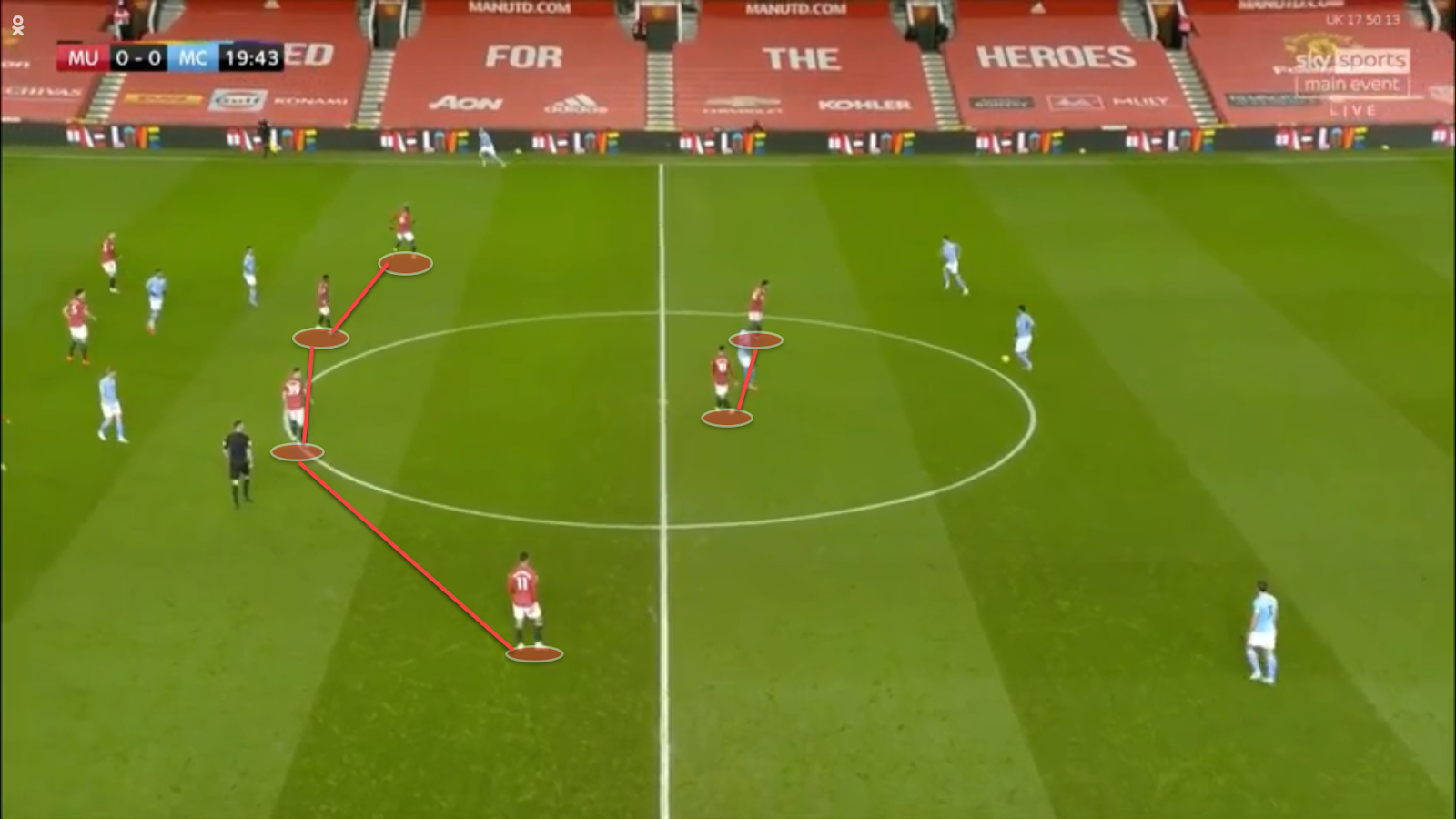 This meant that Man City could not play the ball into the wide areas and isolate the full-back. In the image below, Greenwood is in a position to help Wan-Bissaka on the right as he can delay the opposition’s attack. 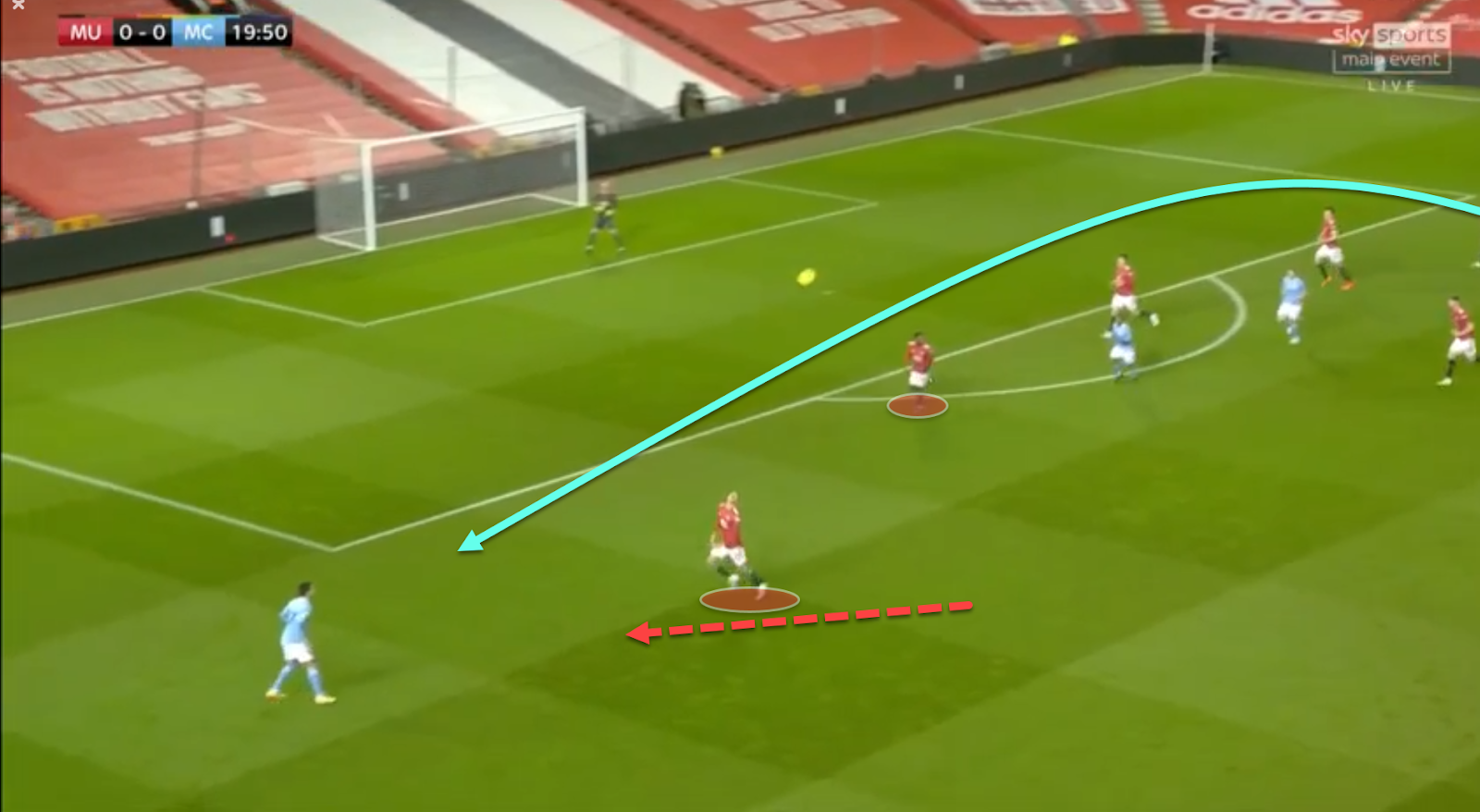 Pogba also worked back well and helped create defensive overloads when Walker or Mahrez would look to progress on the left. The Frenchman’s discipline in the first half was great for United and helped them defensively. 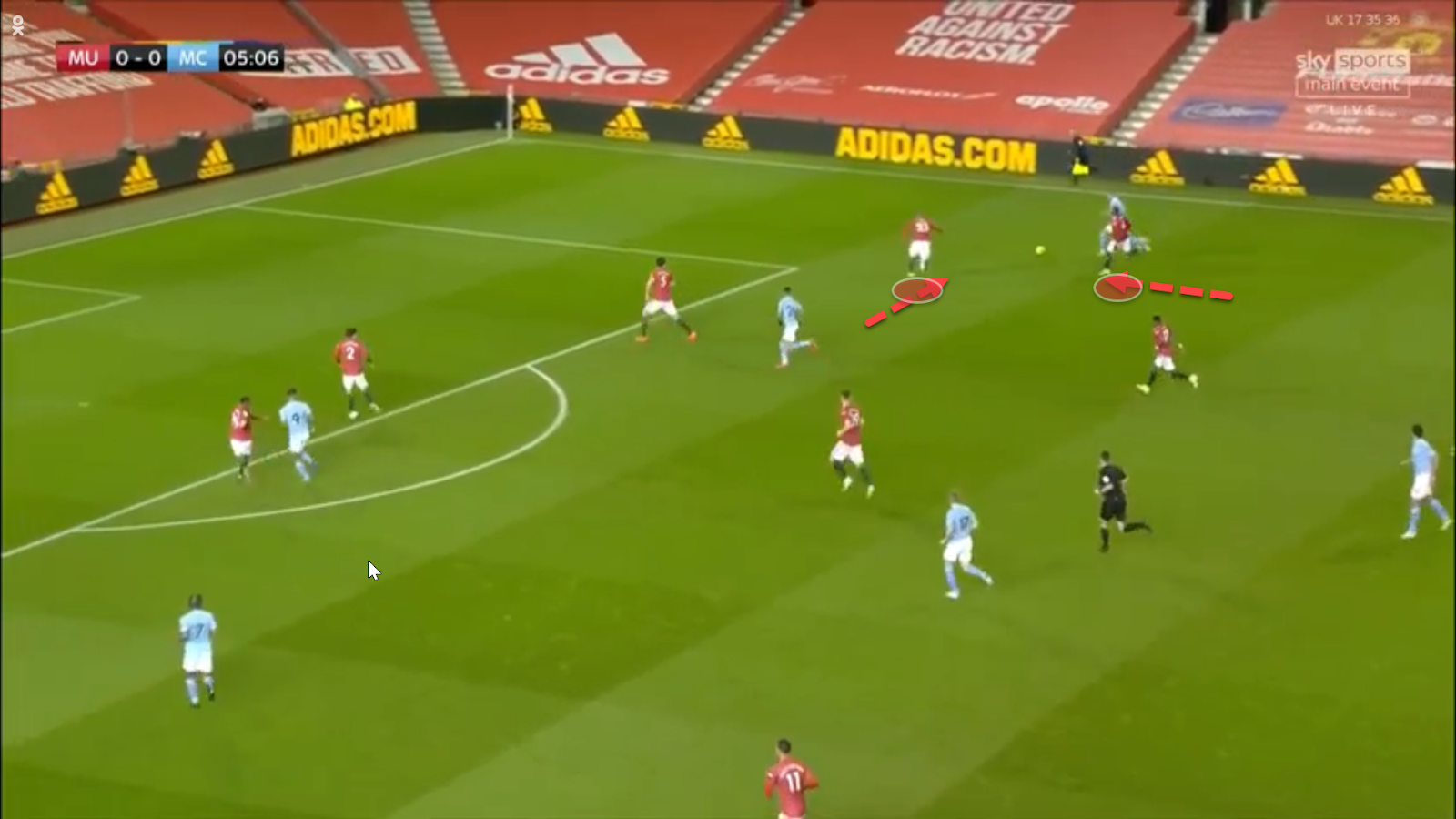 The defensive shape of United was much improved from previous games and was partly the reason for City getting limited chances, Guardiola’s side was set up more conservatively and they were sloppy in possession at times but the United press and defensive shape was also problematic for the visitors.

United’s Action in the Final Third

In what became a game of transitions due to both sides having solid defensive shapes when set, United should’ve taken advantage of this. Yet, the players’s execution and decision making in the final third was poor, as it has been lately.

Fernandes was unable to find the final pass throughout the match and Greenwood and Rashford yet again did not show understanding with each other. This is shown in the image below, where Rashford peels into space inside the area but Greenwood shoots instead, even though he was unbalanced when taking the shot. 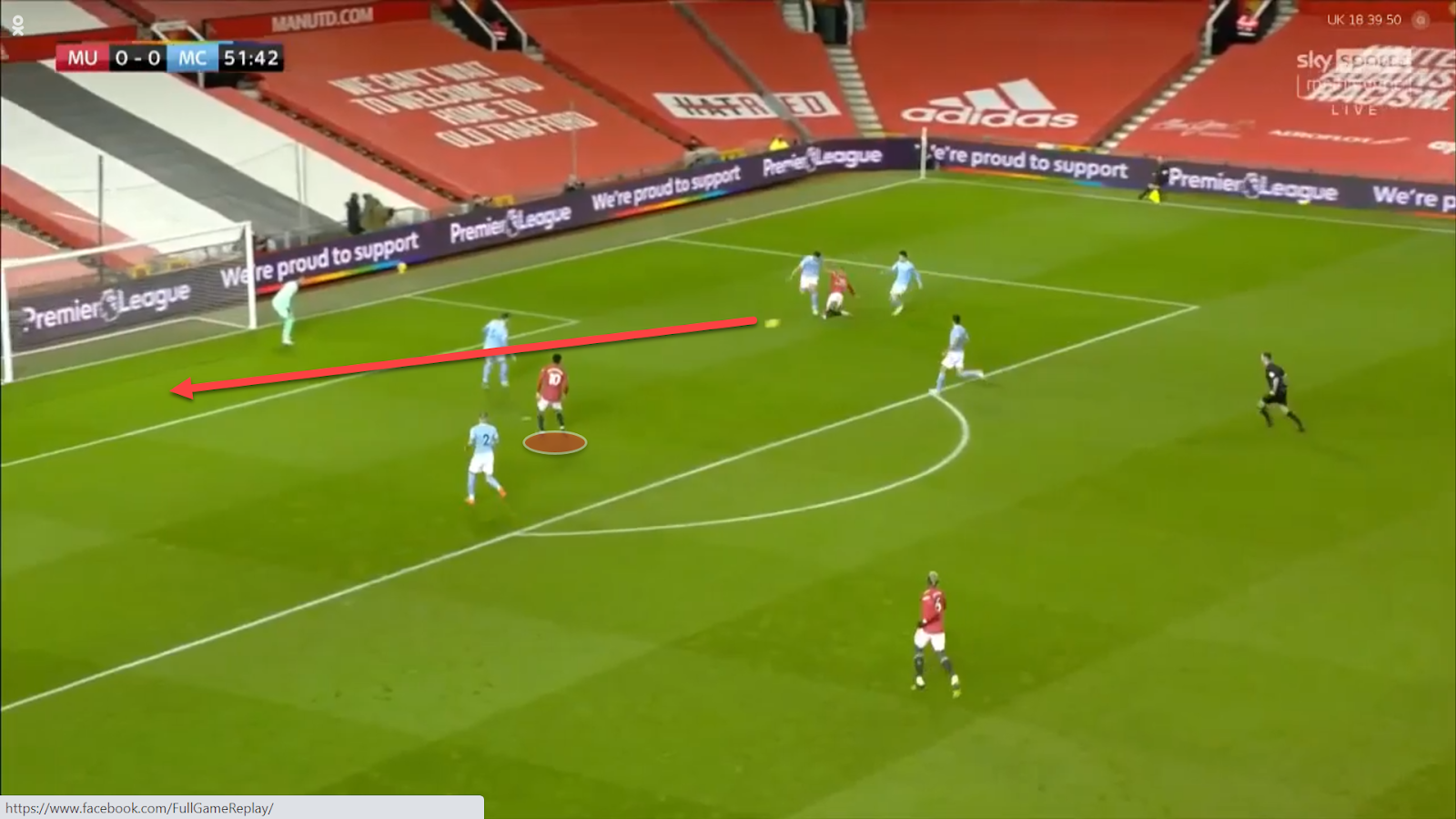 Below is another example of poor decision making in the final third. This time, Rashford did not make a run into the clear space between the City defenders, it was clear that this was where Fernandes was going to attempt to play the pass but the Englishman did not make the run. 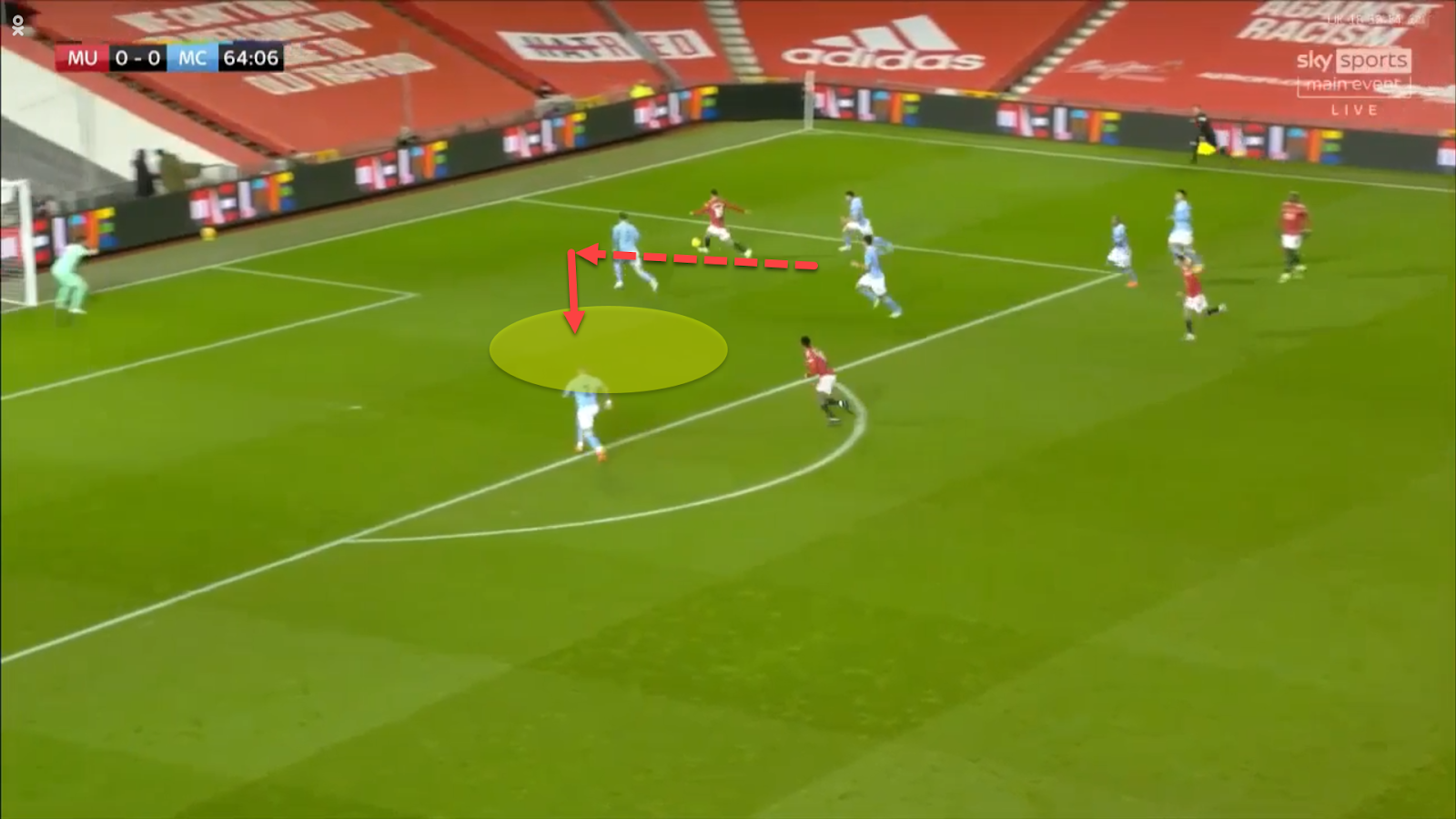 The success of Man United in the final third came predominantly through Pogba, who would often drift infield when United were in possession, with Shaw holding the width. This allowed the Frenchman to receive the ball without immediate pressure in the opposition half many times due to the fact that Walker could not follow him infield.

Pogba created multiple chances for The Reds when moving infield, including the chance shown in the image below. He had space after receiving centrally and this allowed him to find Fernandes in behind the City defensive line – the attacking midfielder was unable to take advantage though. 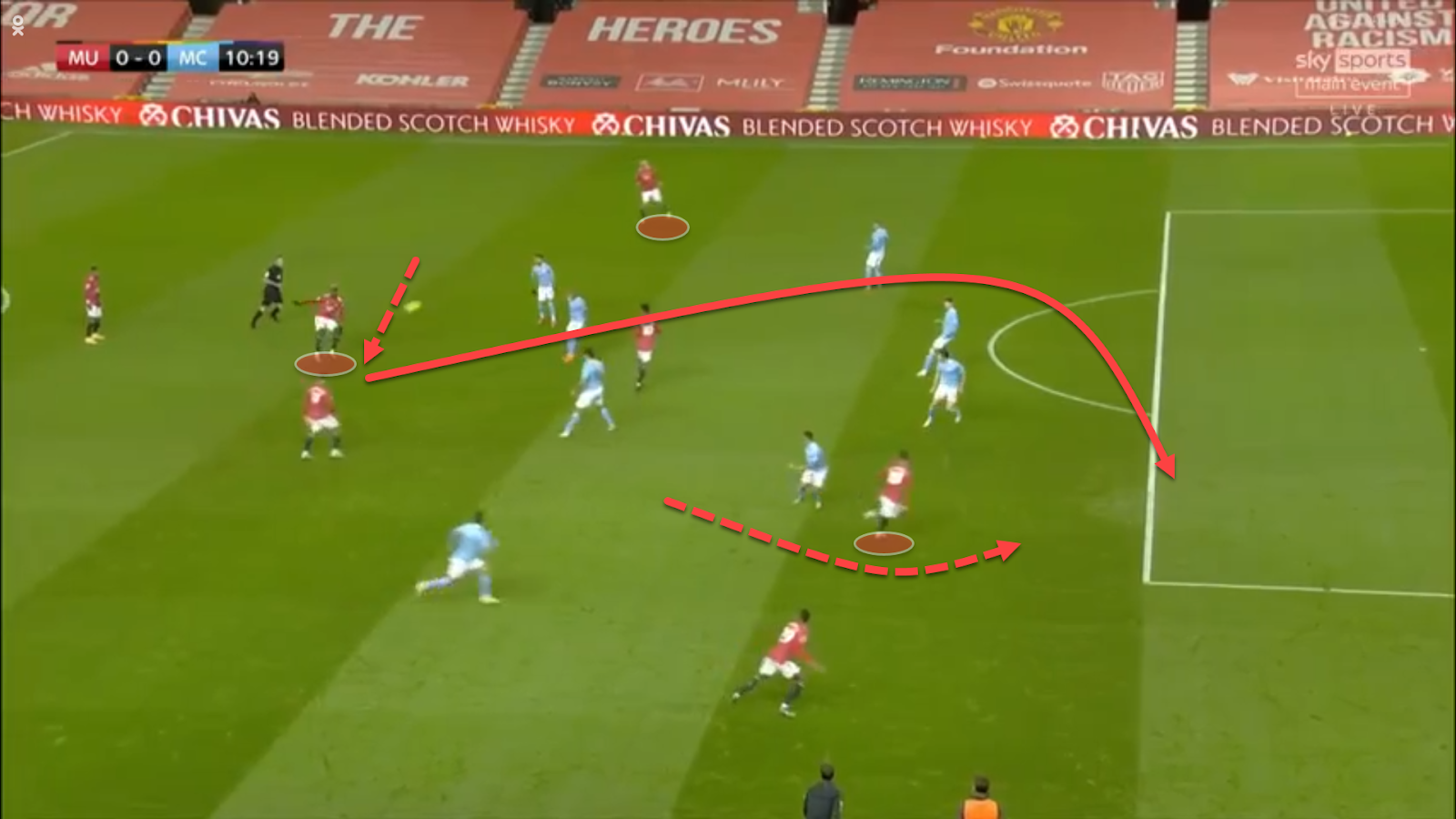 Man City’s main aim in their press was to encourage United to play down the flanks, towards Wan-Bissaka and Shaw but the former was more of a target in this pressing scheme due to his liabilities in the build-up for United. City then looked to win the ball back after forcing the full-back to make a difficult pass on the wing.

In the below example we can firstly see both Kevin De Bruyne and Gabriel Jesus pressing David de Gea and forcing him to play to his right since they both both immediate options in McTominay and Harry Maguire in their cover shadows. 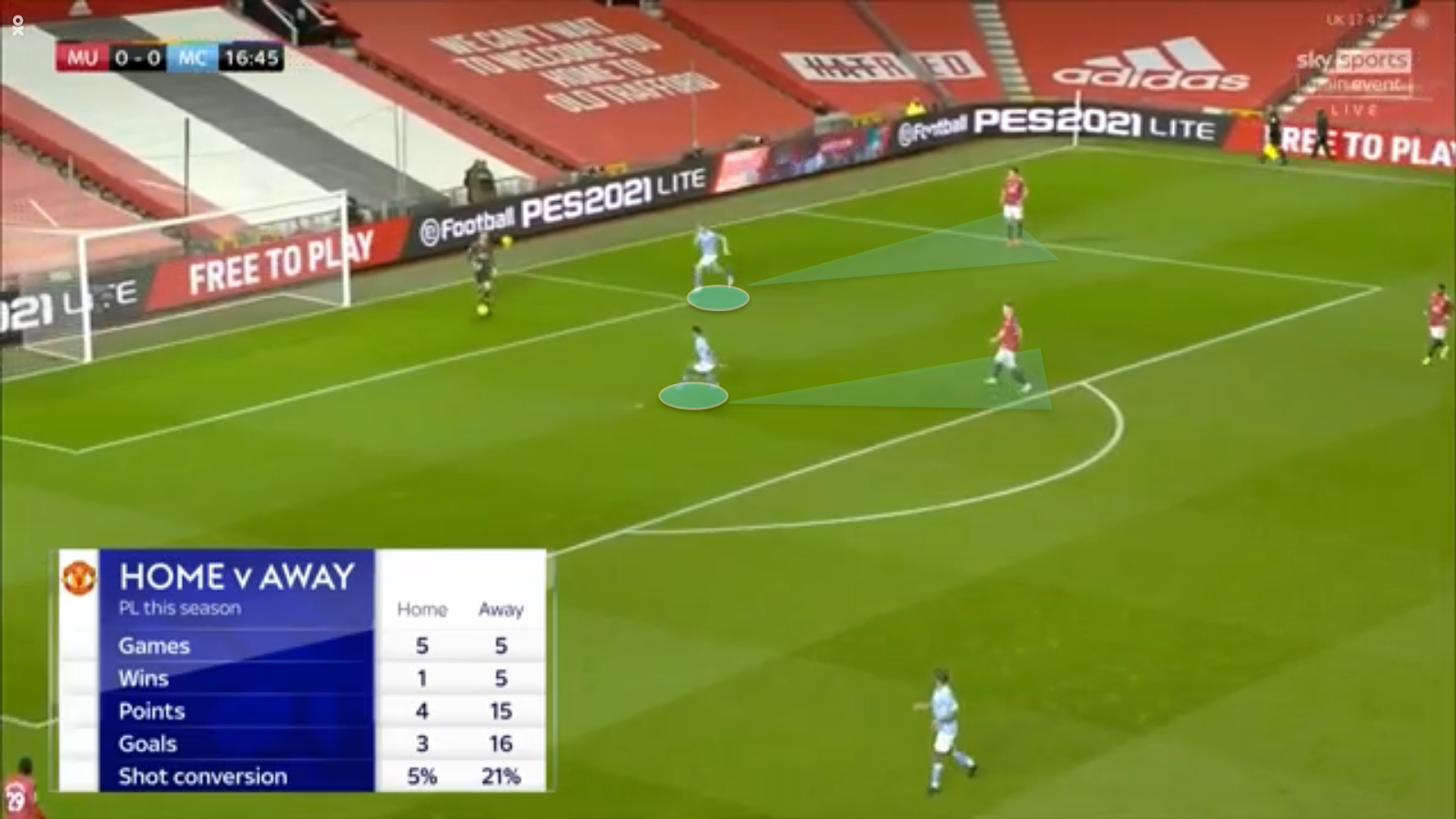 Then after the ball is played to Victor Lindeløf, we see the City players in close proximity to each option apart from Wan-Bissaka, instead of marking the full-back tightly, Raheem Sterling is operating in the half-space and attempting to stop progression through there – this is to attempt and force pass the play to Wan-Bissaka.

Ultimately though, Sterling does not quite cover the half-space good enough and allows Fernandes to receive possession and then he flicks the ball to Wan-Bissaka and United can progress. However, City’s aim in their press is still shown – it was just not executed perfectly. 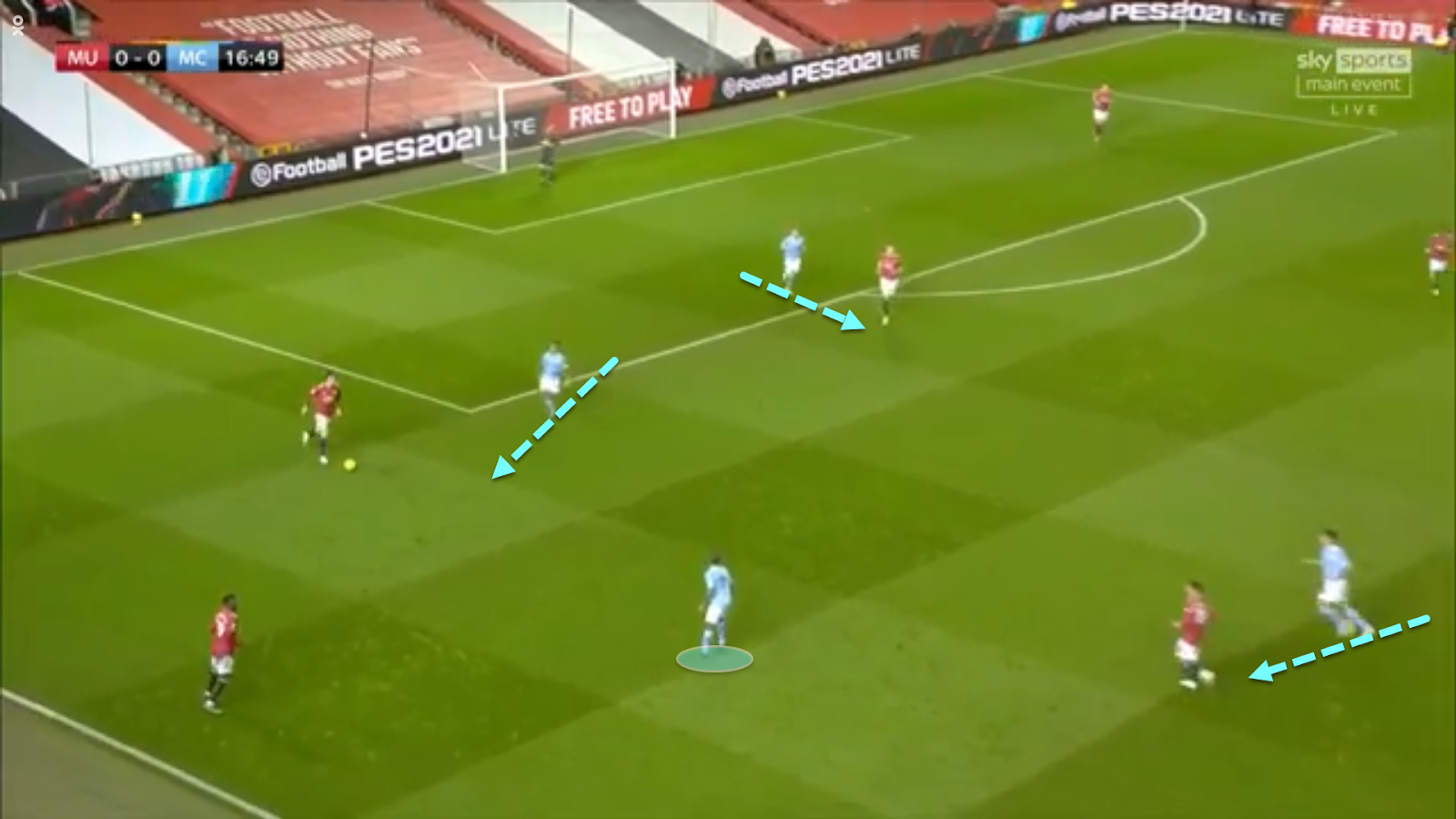 Again, we can see City’s press in action below, De Bryune’s run ensures Lindelof cannot play back towards Maguire and Sterling is blocking off the half-space – meaning the only clear option is Wan-Bissaka as McTominay has a marker in close proximity.

Yet again though, the press does not work due to the great link-up between Wan-Bissaka, McTominay and Fernandes. Although their pressing was successful at times, United had many strong performers in this match, including Maguire, Shaw, McTominay and Fred – the latter two helped break the City press multiple times in the match. 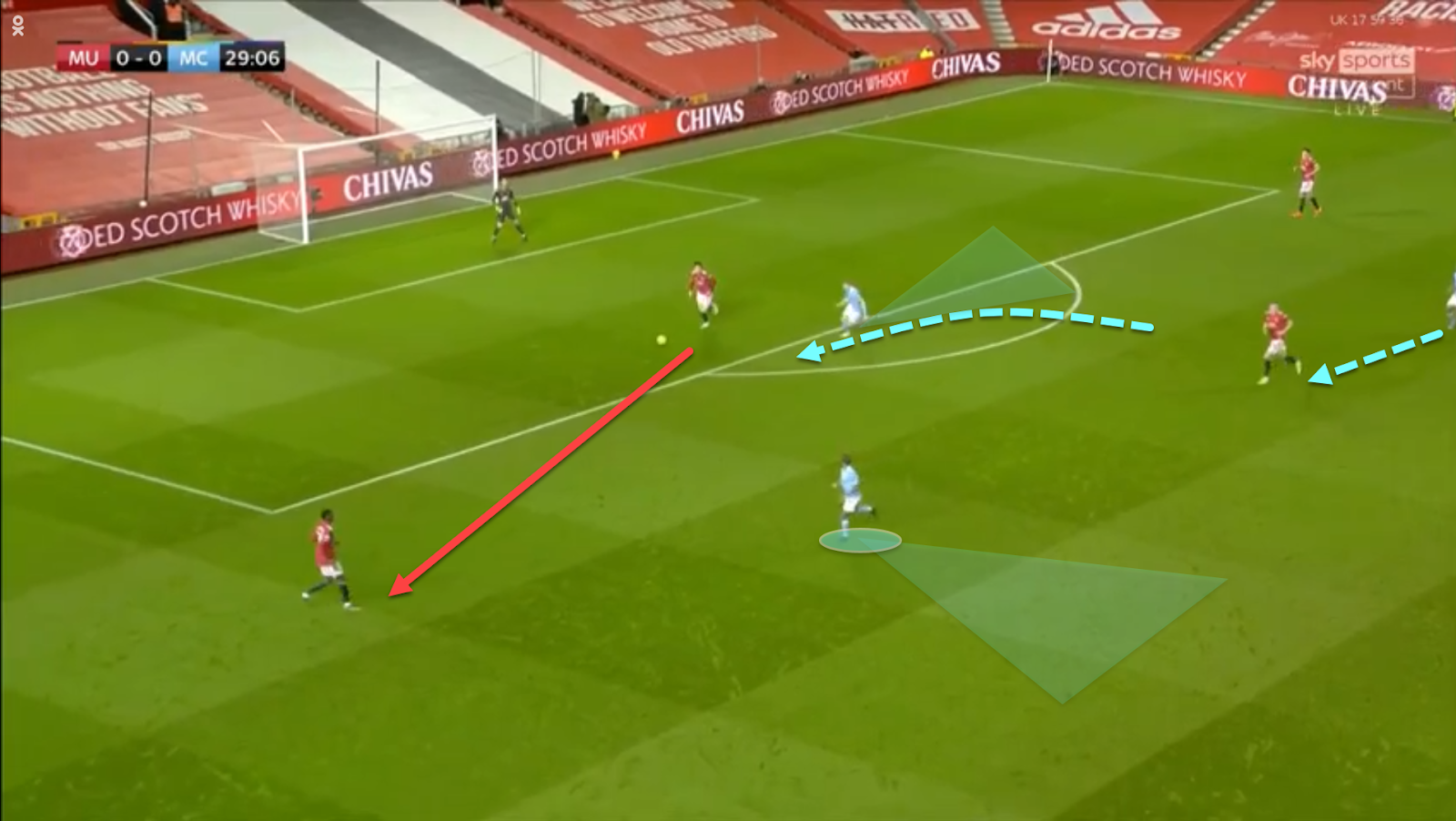 While they were not at their best, City still created a fair amount of chances in the match. They ultimately looked to move the ball into central areas and find their runners – who would make runs in between the United defensive line – as shown below, however, in this instance, Maguire intercepted the pass. 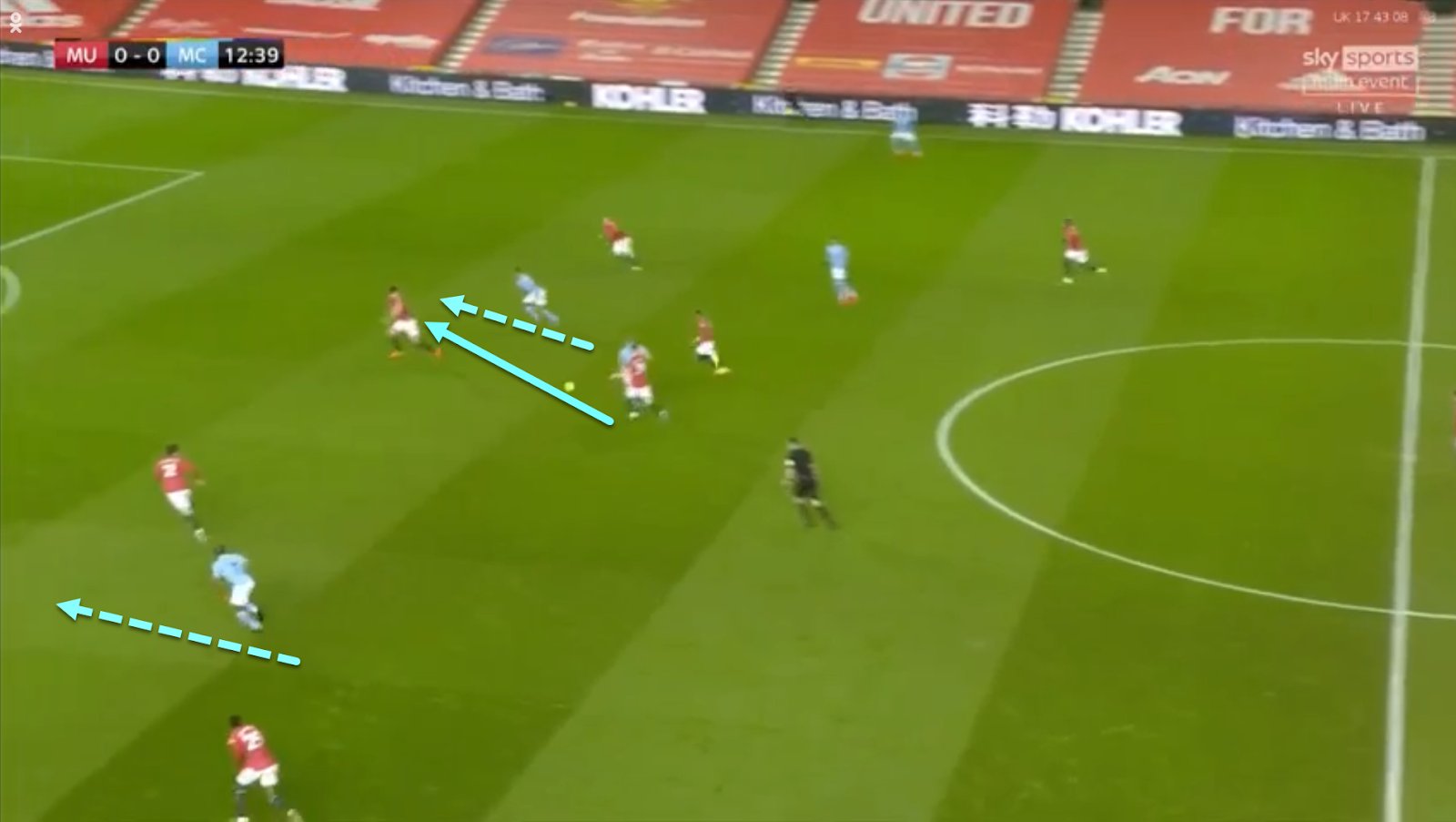 There was clear space in transitions between the defence and this would cause problems for United at Mahrez and Ferran Torres when he came on, since they kept their width (especially the latter) well. Ths created arguably the best chance of the game.

As we can see below, City are transitioning and attacking United in the final third. Jesus is running at Maguire and De Bruyne makes his run in between Shaw and Maguire as there is a large space to take advantage of in the transition. This causes Shaw to shift across but then allows De Bruyne to receive and find Mahrez is space on the right-side. Yet, Mahrez could only hit his shot straight at De Gea. 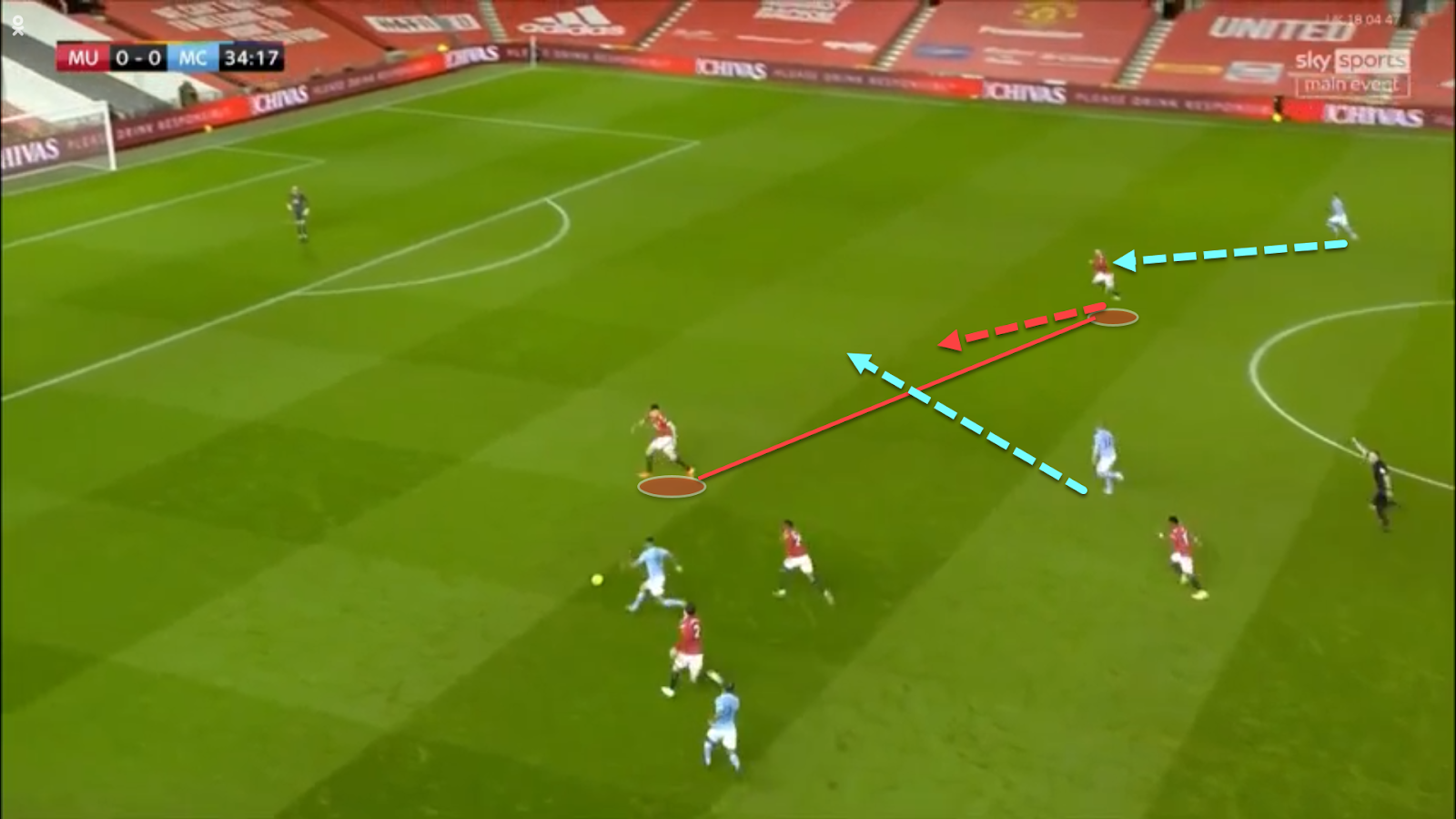 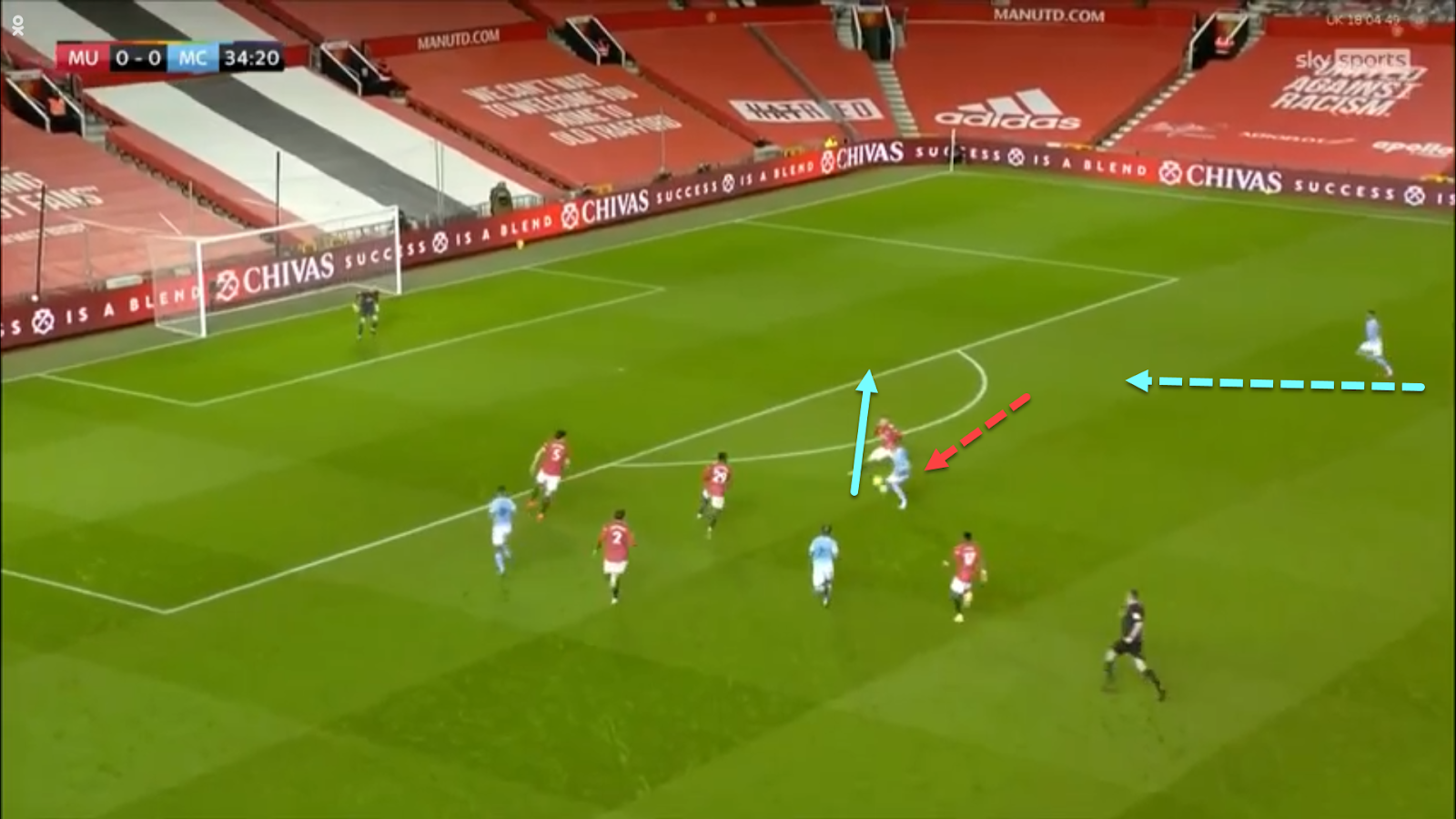 This was an attacking strategy which caused United some problems but for the most part, City were poor in their final third execution for their standards. Yet, they still could’ve won the game through the chances they created through the way they attacked the spaces in between United’s defensive line.

As the scoreline suggested, this was not the best Manchester Derby by some stretch. Both sides took conservative approaches and did not want to lose the match, rather than striving to win it. However, United have taken similar counter-attacking stances before and came on top, but their decision making and execution in transitions and in the final third was below par on this occasion.

While City had certainly learnt from their recent past experiences against the Reds and nullified United well for the most part. Neither side will be disappointed about sharing the spoils and while they both still have a game in hand on the sides around them – they each will be looking to climb the table in the coming Christmas period.