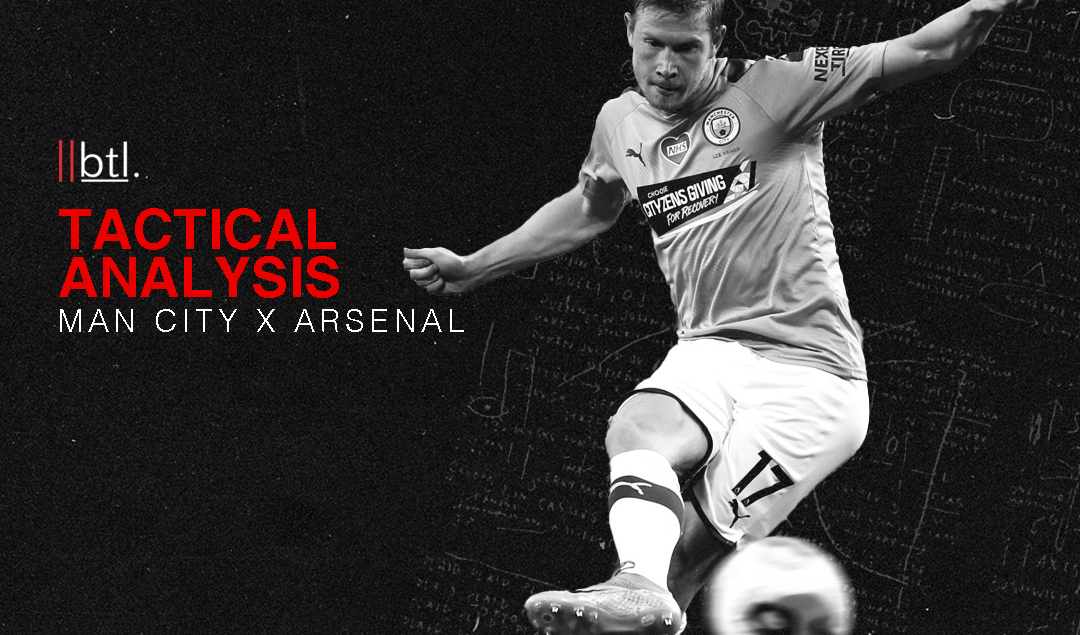 Mikel Arteta, Pep Guardiola’s assistant during the spell of the Spanish manager at Manchester City, decided to leave City the 18th December of 2019 and to go to Arsenal, his last club as a footballer. Last week, Guardiola and Arteta met each other at the Etihad Stadium for the restart of Premier League football and Manchester City won 3-0.

In this tactical analysis, I will break down what has gone wrong for Arsenal and what went right for City.

City created most of their chances from rotations. In the 20th minute, Riyad Mahrez came infield and Kyle Walker then took the overlap instead of staying in midfield. The same happened for Kevin de Bruyne’s pass to Raheem Sterling, who missed his 1v1 opportunity with Bernd Leno. Sterling found himself on the right after a rotation from Walker and Mahrez being wide right.

The rotations were also there to form triangles and get out of Arsenal’s high press early in the game. Gabriel Jesus was often tasked to drop deeper to create overloads in midfield. It often created space for his wingers as Shkodran Mustafi followed him deep but neither Sterling or Mahrez really exploited it.

Once again, City adopted an asymmetrical shape with Walker playing as an inverted full-back, Mahrez providing width on the right wing and Benjamin Mendy overlapping on the other side. This way, they were able to occupy both wings during the game as seen below in their pitch occupation. 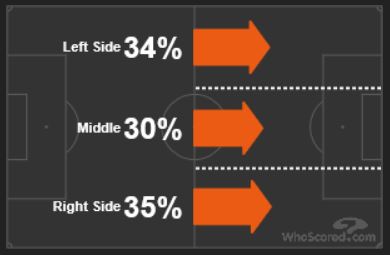 The goal was to find Mendy into space with no opponent around so he could cross the ball, but it didn’t go as planned and Mendy was able to deliver only 2 crosses, in stark contrast to his average of 5 attempted crosses per game. Nevertheless, after David Luiz’s red card, City were able to find the right winger alone with greater success thanks to the asymmetrical shape and one extra man overall.

City off the Ball

Defensively, İlkay Gündoğan constantly followed Mattéo Guendouzi high up the pitch, which meant that nobody from City was in the middle to stop transitions if Guendouzi managed to find a way out of the press.

This is conveyed below with Gündoğan following Guendouzi, as the French midfielder was able to find Kieran Tierney alone on the left, who had the time and space to find Joe Willock infield. It led to nothing, but City could have easily conceded. 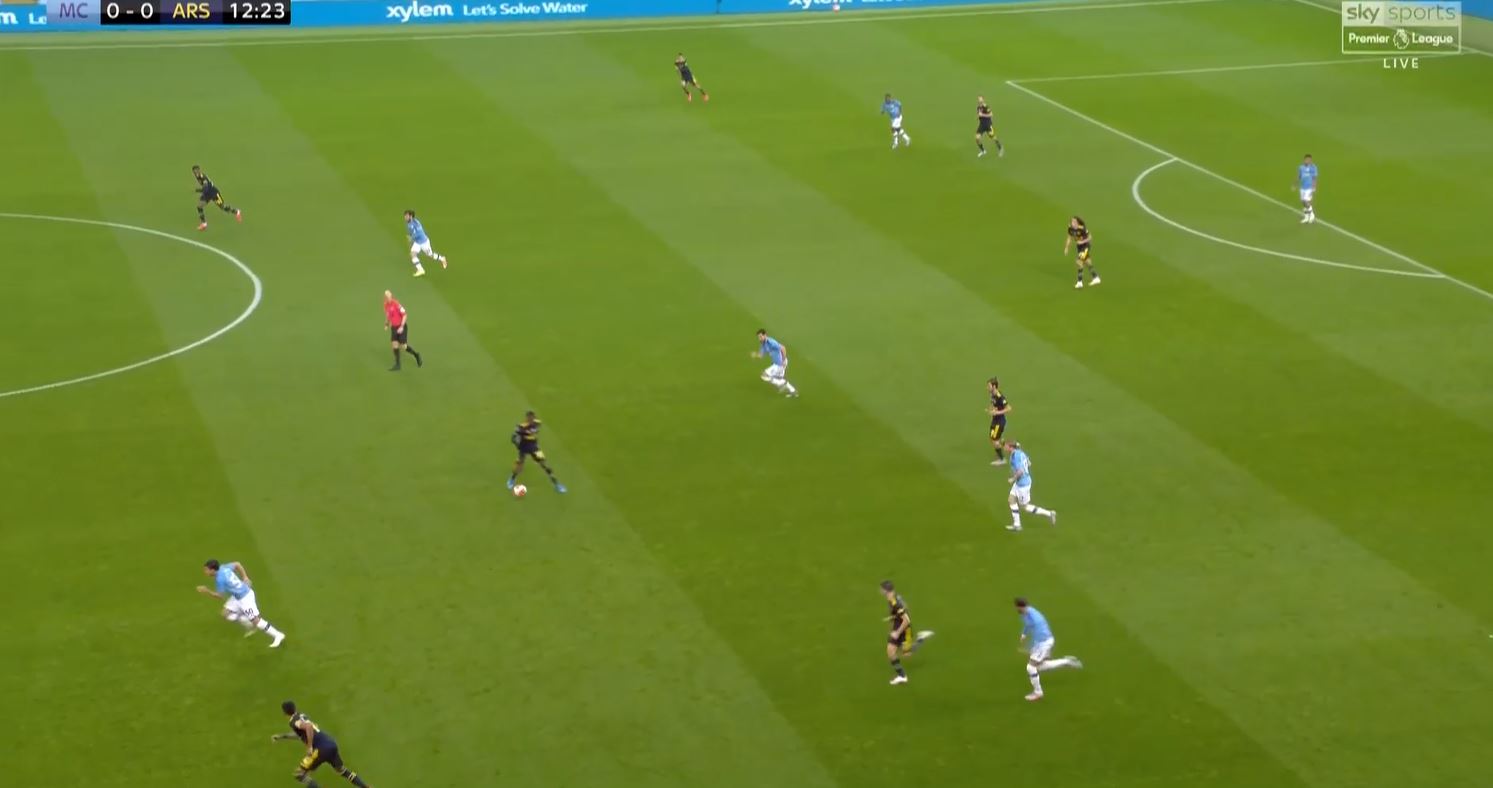 When Arsenal had the ball close to their own goal, they decided to wait for one City player to commit before making a pass. But City rendered Arsenal’s press baiting impossible due to Gabriel Jesus covering Guendouzi so he couldn’t get the ball.

At the same time, Jesus neither pressed Arsenal’s centre-backs nor Leno, and they were forced to play wayward long balls as a result. Arsenal won a mere 23% of the long balls in the game. 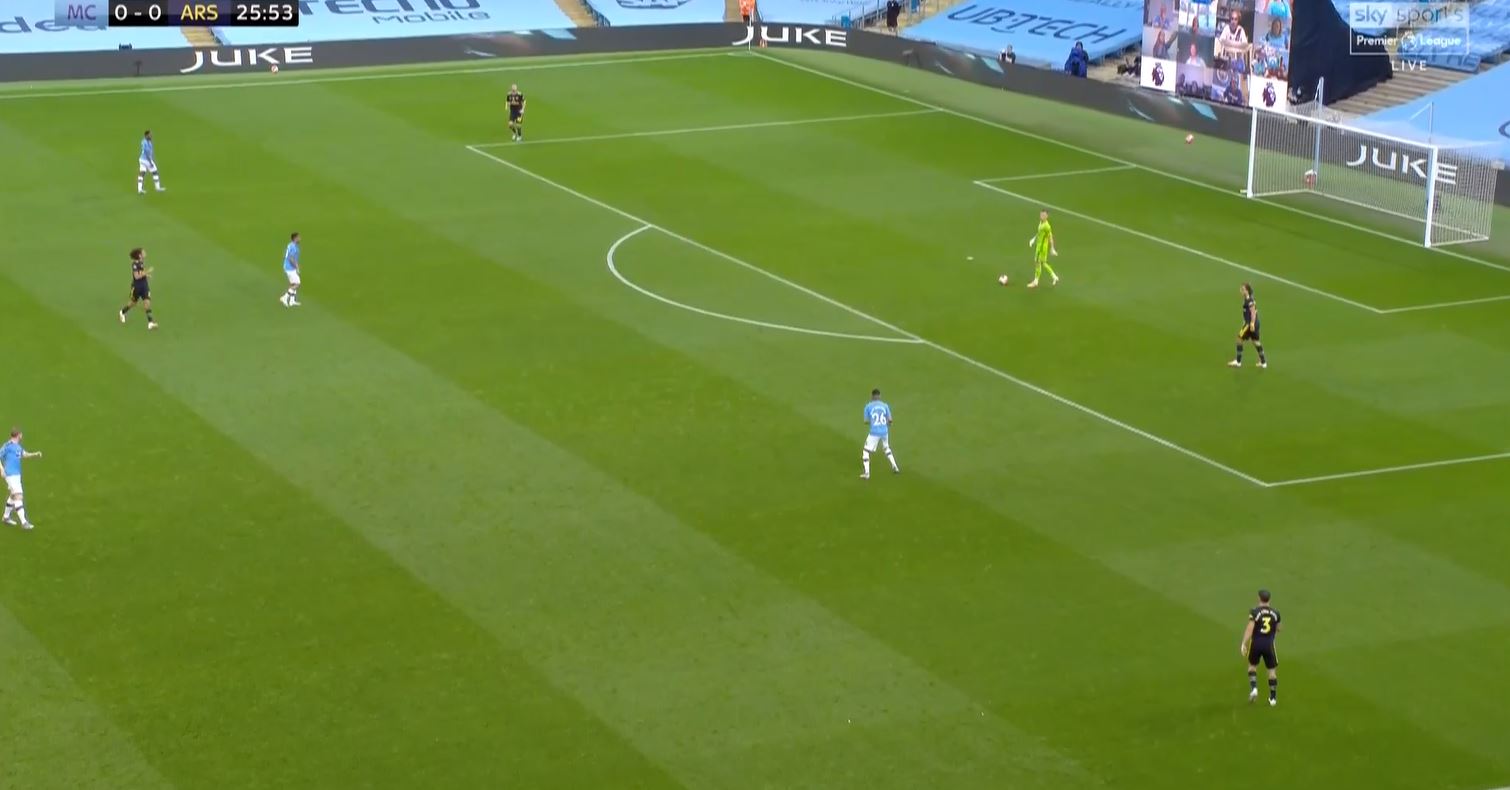 Arsenal on the Ball

Arsenal’s main plan was to expose City’s high defensive line, so Arteta tasked Pierre-Emerick Aubameyang and Eddie Nketiah to make runs in behind. Arteta decided to not put Mesut Özil in the starting line-up, and as a result, Arsenal’s lack of creativity was evident, with 0 shots on target and only three shots throughout the game.

Their best chance came in the 15th minute. Leno managed to find Guendouzi in the middle of the pitch and in space. Nobody closed down Hector Bellerín, and Guendouzi was able to find him in between two City players.

Bellerín drove infield and found Dani Ceballos alone on the other side. While Aubameyang was keeping wide, Tierney decided to come inside to receive and drive into space, before finding Aubameyang for an early cross.

Arsenal off the Ball

However, City found success on the counter in the first 25 minutes because Arsenal players often overcommitted and City were able to get out of the press easily which opened the middle of the pitch.

Arsenal opted to not press Aymeric Laporte and Eric García, with Nketiah tasked with keeping Gündoğan in his cover-shadow. This had the same goal as City’ strategy, which was to neglect City’s press baiting in deeper areas to create overloads higher up the pitch once Arsenal’s forwards committed. 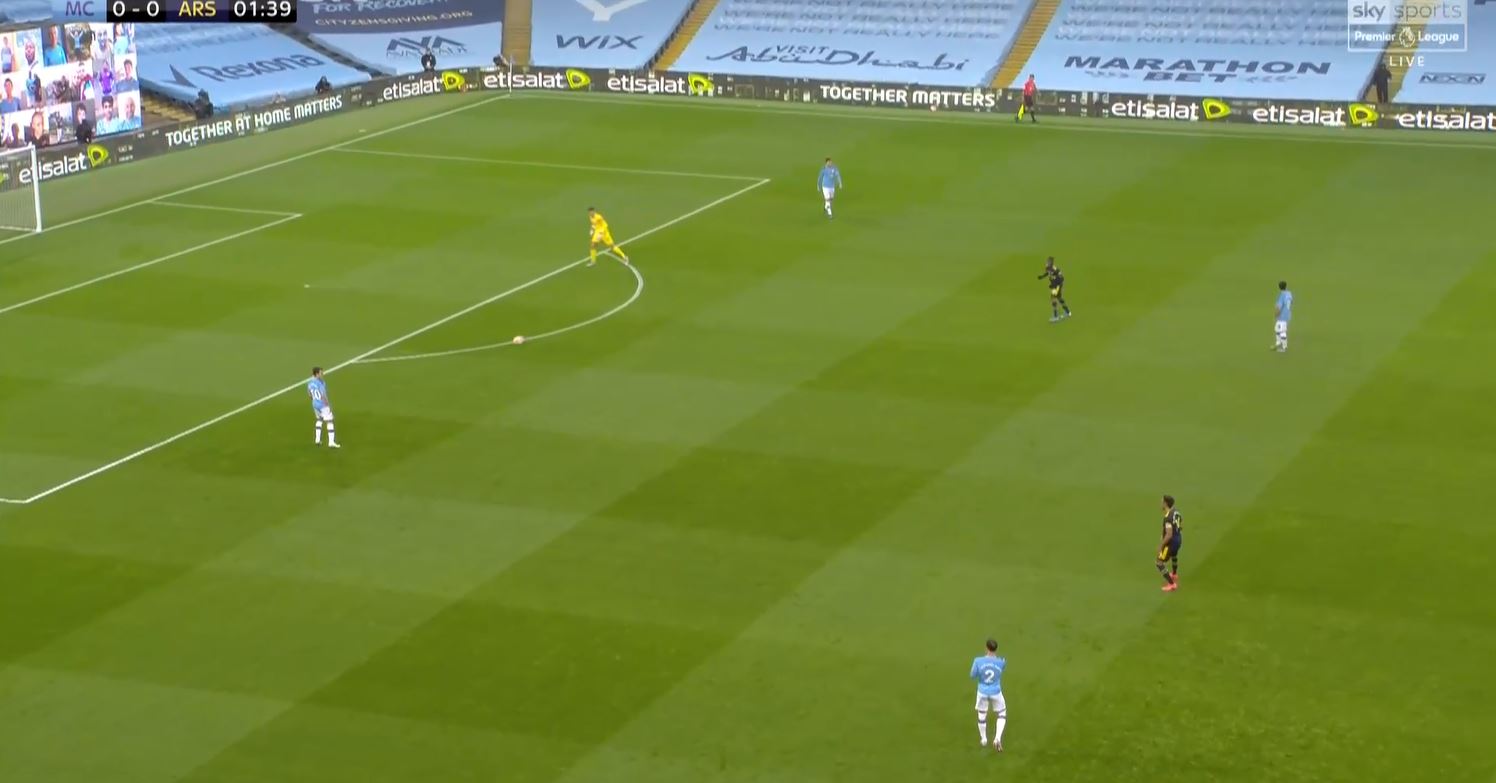 Arsenal players also closed infield as much as they could, allowing Mahrez, Walker or Mendy to take the overlap but keeping the inside closed. Below, we can see that Mendy doesn’t have any passing lane available and eventually he lost the ball. 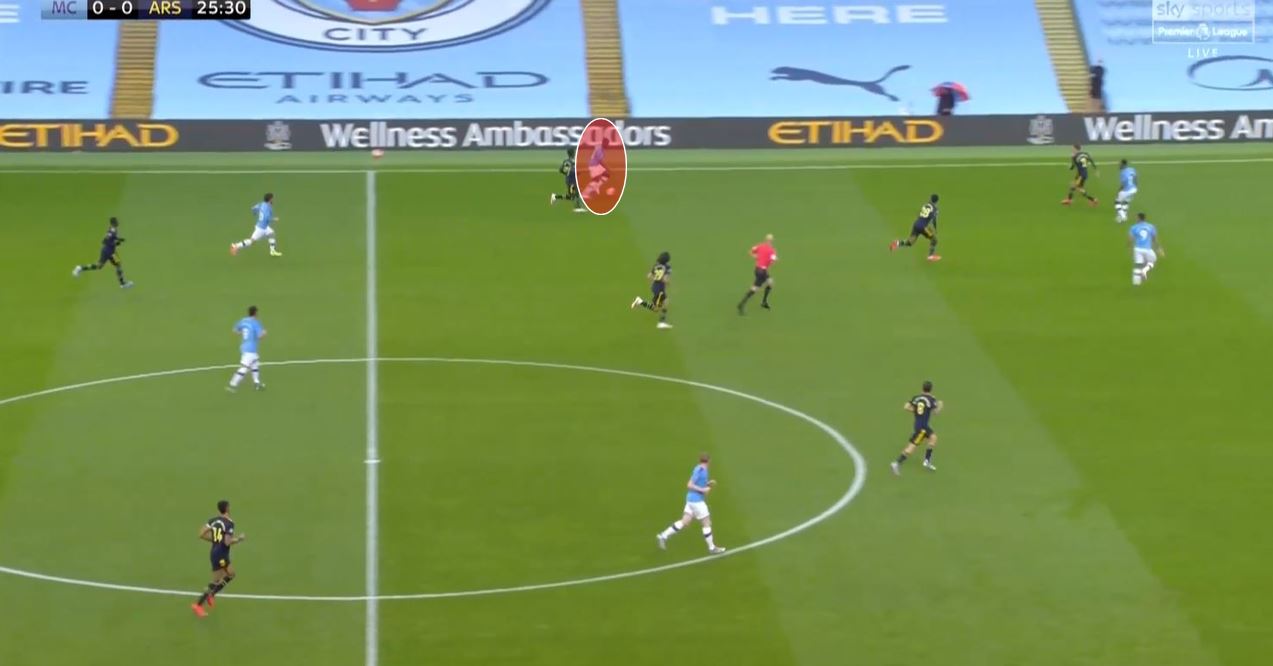 Arsenal operated in a 4-2-3-1 defensive shape initially, but switched to a 5-3-1 after Luiz’s expulsion. After the first 25 minutes, Arsenal neglected to defend the half-spaces, and it allowed City to dominate.

As seen below, Tierney and Ceballos are double-marking Mahrez whilst Guendouzi attempts to block De Bruyne’s pass. In turn, this leaves Sterling with plenty of time and space to receive in the box. 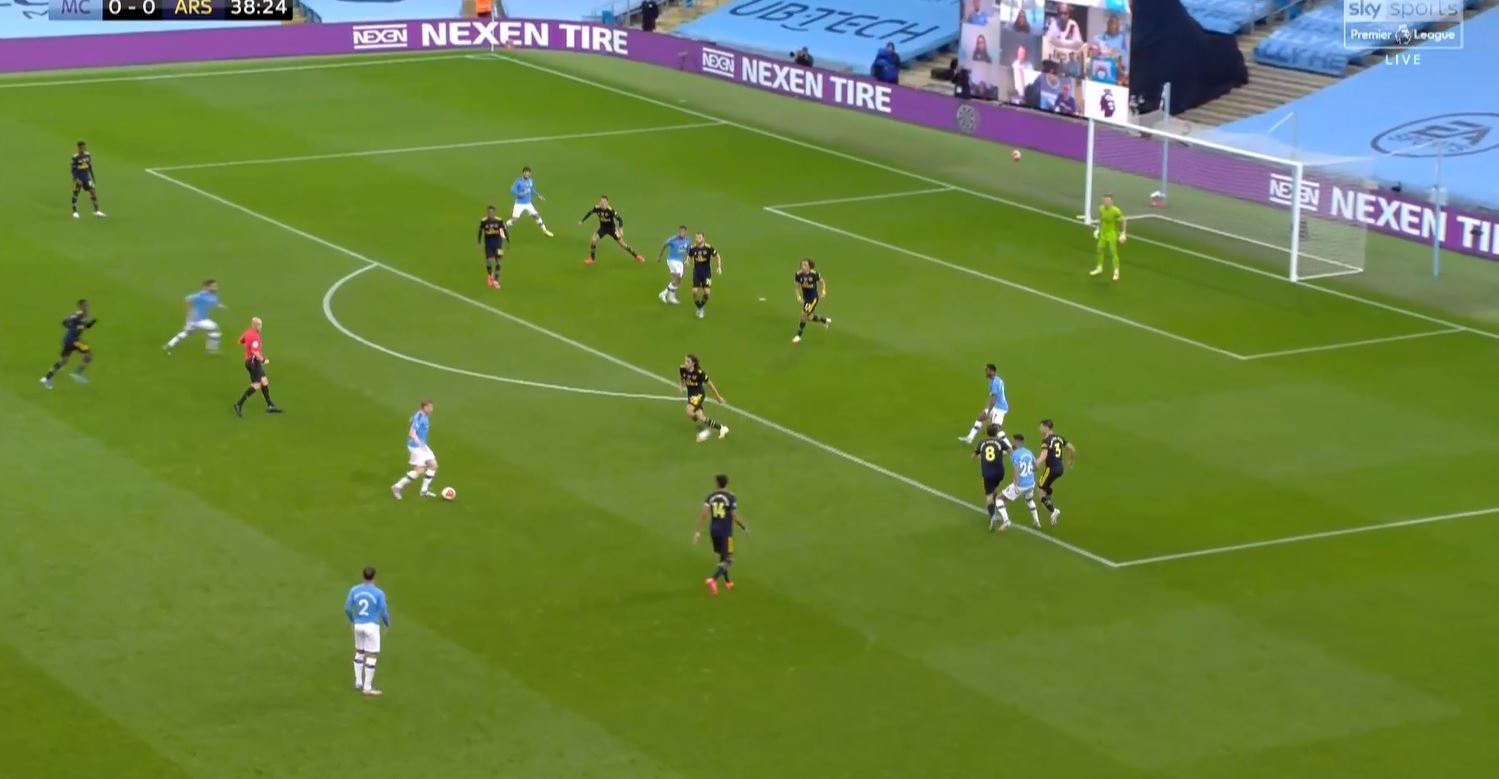 Nketiah was selected over Alexandre Lacazette due to his pace and was tasked with either playing on the shoulder behind City’s defensive line or dropping to connect the play.

He caused plenty of issues to García thanks to his speed, as seen below where the referee failed to call a foul despite Garcia clearly mauling him. Nketiah only touched the ball 30 times and struggled create chances as Walker covered Aubameyang very well, preventing him from finding a free man to play in. 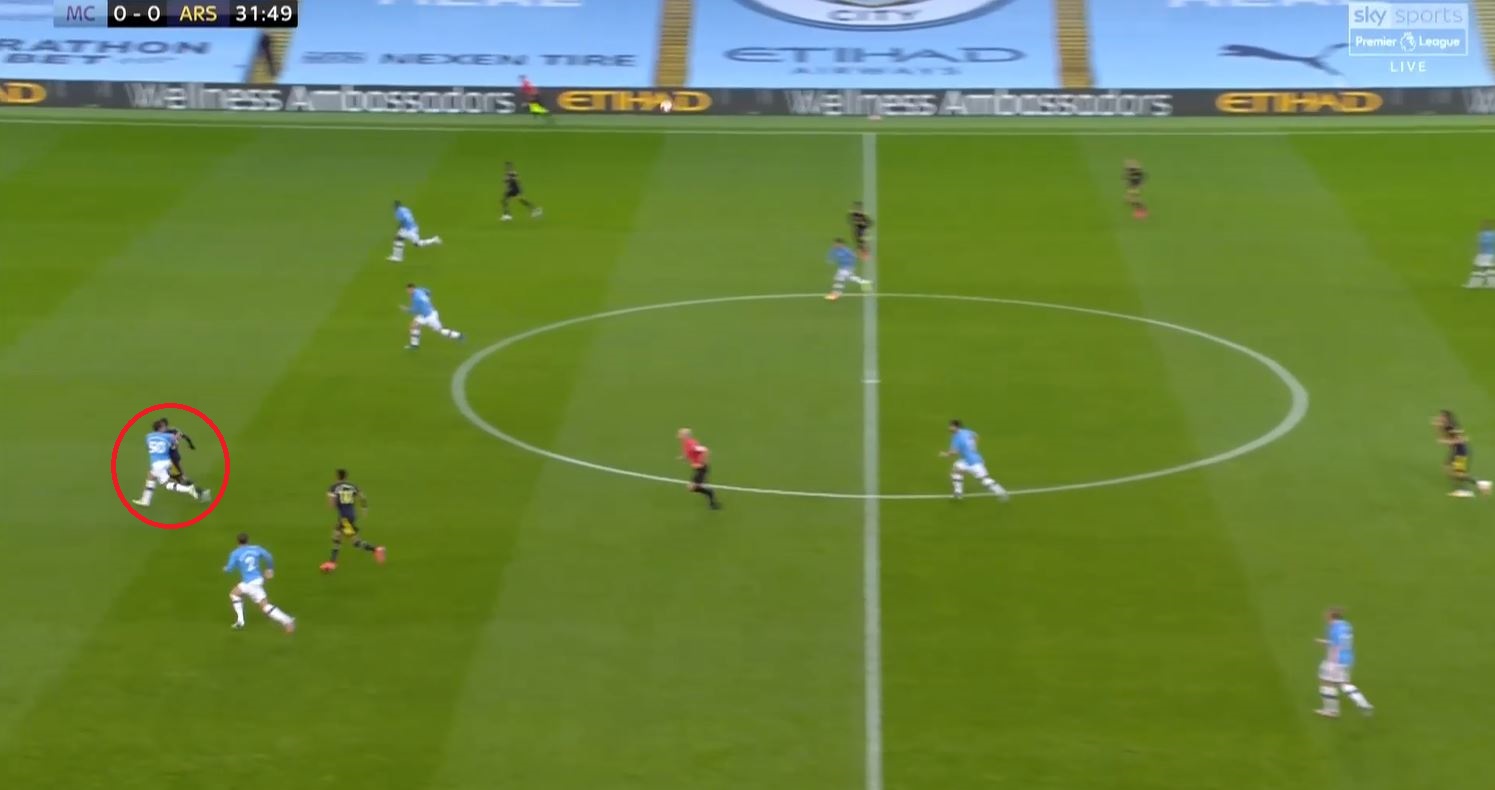 The Scottish left back delivered a solid performance in one of his first Premier League starts for Arsenal. He was tasked with making the overlap to allow Aubameyang to come inside, but he failed to make a single cross throughout the game.

When Aubameyang stayed wide, Tierney wasn’t afraid of coming in the middle of the pitch to connect with his midfielders and he did it quite well, as highlighted by 91% passing accuracy. The Scot constantly had to follow Mahrez deep and press him on the ball, and prevented switches of play from Walker thanks to his assured aerial ability.

He has made a couple of bad decisions, his biggest one coming in the 36th minute where he should’ve set Aubameyang up but instead decided to wait for Bukayo Saka on the other side on the counter, which killed the space Aubameyang could have exploited. 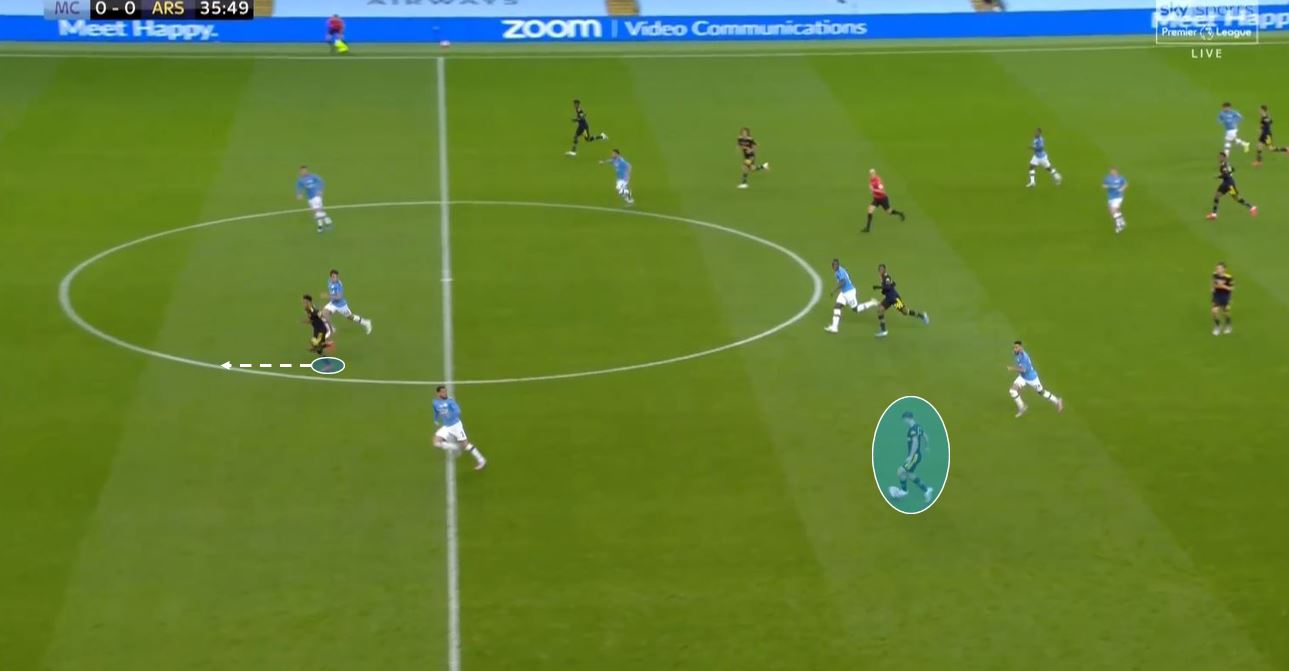 Aubameyang was tasked with getting in behind City’s high defensive line, but he ended up being starved of possession.

Defensively, he was tasked to control Mahrez and Walker’s movements in wide areas while not allowing the ball to come inside, where City are the most dangerous. Once Luiz was sent off, Aubameyang had to play in midfield in a 5-3-1, which limited his offensive contribution.

As usual, De Bruyne was the best player on the pitch. He dictated the tempo of the game for his side offensively but was still impactful defensively by leading the press in midfield and getting recoveries. He created 2 big chances, recorded 3 shots on target and his pass to set Mahrez up in the 36th minute should’ve deserved a better outcome.

The Belgian’s off-the-ball movement created space for his teammates as he got involved into rotations and found himself on the left quite a few times. He was also able to make many switches of play from right to left.

De Bruyne brought dynamism to City’s offense as he often made runs beyond the last line to make Arsenal’s defensive line come deeper. He was also able to come deeper to get the ball, drawing players out of position and created space for City players.

One of the more surprising inclusions in the line-up, the Catalan teenager impressed on the ball, finding Walker and Mahrez in space on the right. However, he struggled defensively, as his poor positioning found him exposed against Nketiah twice.

Offensively, he made two awful forward passes which could’ve led to dangerous counters, but for the most part, he kept it simple and got the job done for one of his first Premier League games as a starter.

As customary, Walker operated in the inverted full-back role where he often came in the middle of the pitch to create overloads. Although he was tasked with bringing overloads in midfield, he knew he had to overlap when Mahrez came inside to receive the ball.

His positioning on the inside allowed him to handle Aubameyang’s runs pretty well, as the Gabonese striker was left isolated throughout the match. Arsenal often relied on switches of play from right to left to Aubameyang into space but Walker was always the first on the ball.

Adding onto this, he was important when it came to stop counter-attacks, having made a total of 4 interceptions during the game.