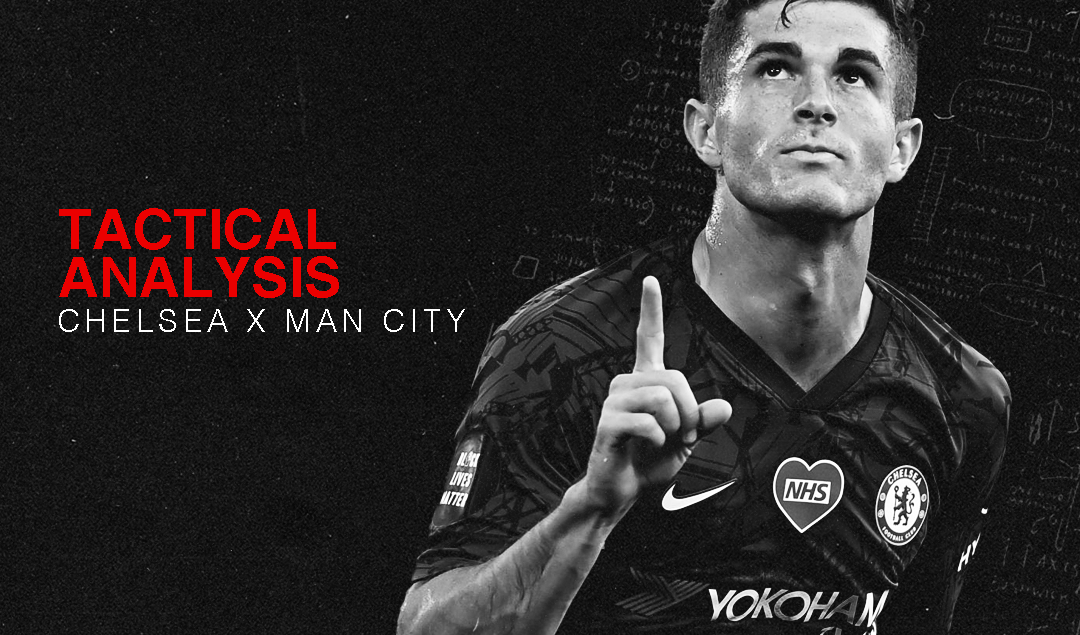 After the recent signing of Timo Werner, Chelsea came out of the three-month COVID-19 break looking to rubber stamp their credentials as a rising power in the Premier League. Having come from behind at Villa Park to win on Sunday, Chelsea once again came out 2-1 victors in their game versus Manchester City, officially handing the Premier League title to Liverpool for the first time in their history.

The game itself can be broken down into a few key aspects that help to explain why momentum frequently shifted between the two teams. Formations, positioning in possession, individual actions, and tactical instructions all contributed to varying degrees throughout the game.

With Sergio Agüero missing out due to injury, Pep Guardiola went with what seemed like a 4-2-3-1 on paper, only with Bernardo Silva playing as a false nine rather than an out-and-out striker. In the first phase of possession, City established overloads over Chelsea’s front three by utilising Ederson’s excellent passing.

As Rodri and İlkay Gündoğan formed a double pivot (as opposed to the usual lone #6 City play with), they maintained their ‘W-shape’ build-up positioning. This allowed for for vertical/diagonal passes to be played at nearly all times (whilst avoiding risky and unnecessary horizontal passes). 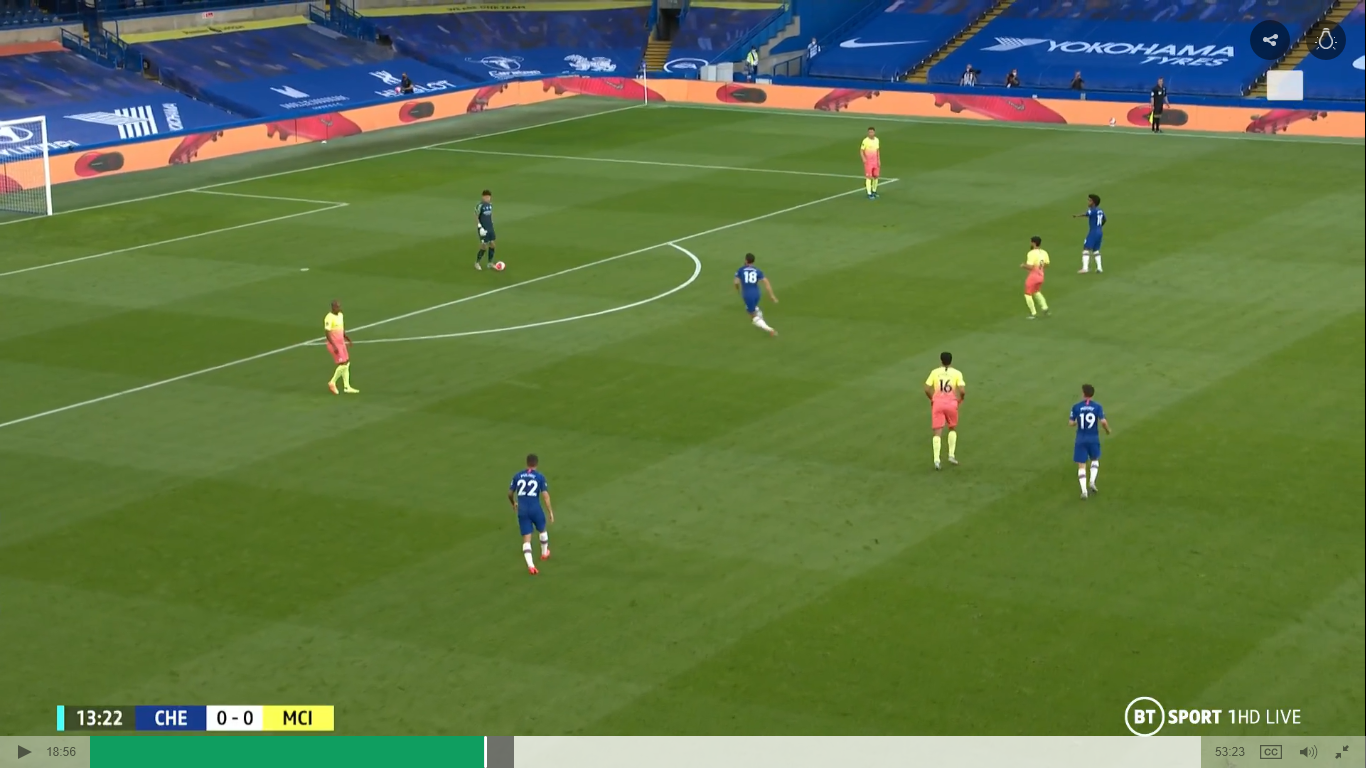 Ederson being used as a very deep playmaker allows for City to create numerical advantages over Chelsea’s front three, while creating the optimal ‘W-shape.’

Using Ederson as a deep playmaker is beneficial for the reasons discussed above but can be risky against teams like Chelsea that press aggressively throughout the match. Ederson gave the ball away twice with sloppy passes, leading to chances on goal.

Apart from Agüero’s injury, one of the reasons City played a false nine (instead of using Gabriel Jesus from the outset) was because Chelsea continued with their ‘attacking’ 4-3-3. With N’Golo Kanté sat as a lone #6 and Ross Barkley and Mason Mount ahead, Guardiola may have expected to create overloads as Bernardo Silva dropped deep to help progress play.

However, Mount and Barkley were surprisingly disciplined, covering the half-spaces well while Kanté mopped up central areas, as Chelsea maintained a solid 4-5-1 settled shape when out of possession. Bernardo Silva was virtually uninvolved in the first half and was even seen dropping to the center backs to receive passes.

This would have made sense if he wasn’t playing as a false 9, as he is typically a good ball carrier, but it forced Riyad Mahrez and Raheem Sterling to occupy Chelsea’s back line in these instances, rather than position themselves in more optimal wide positions, waiting for a 1v1 situation. The knock-on effect of Silva dropping so deep was drastic. 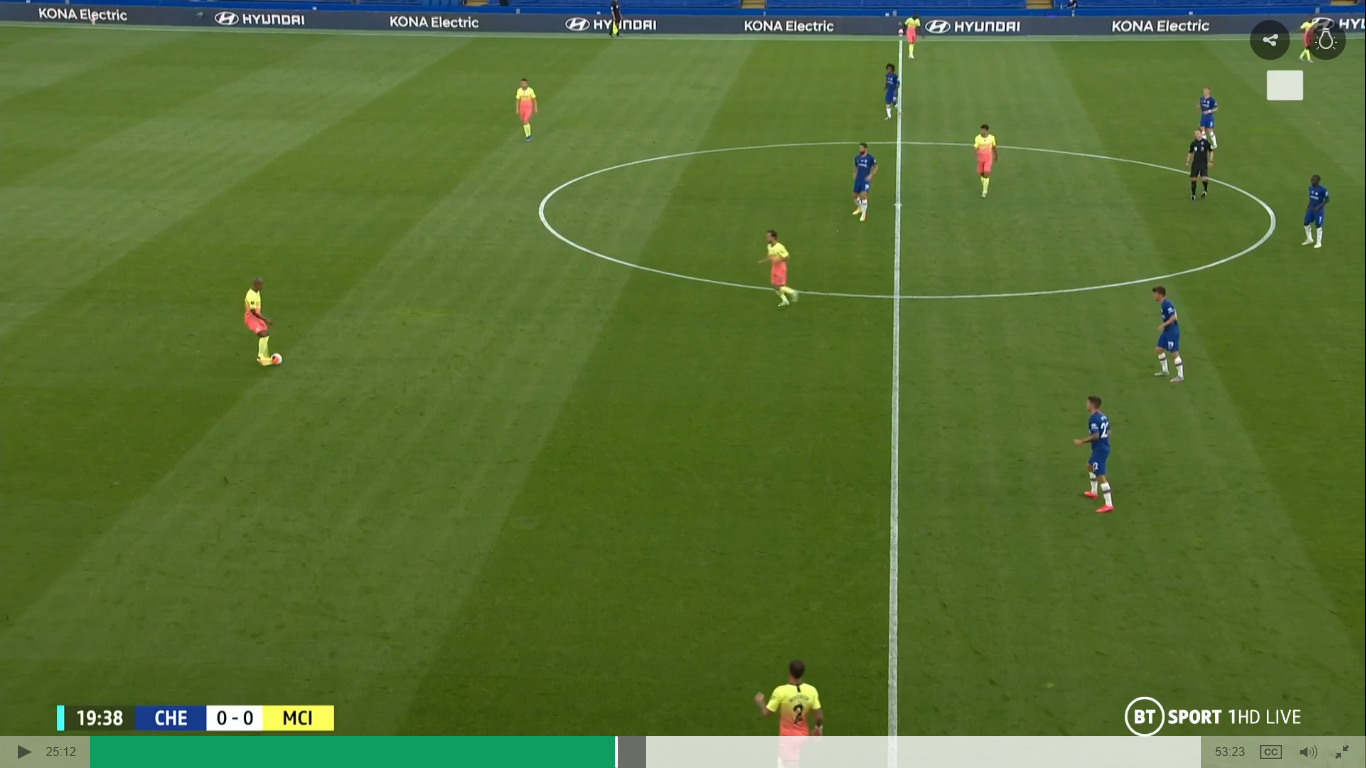 As a result of their solid shape, Chelsea could have reasonably expected to shut City out in the first half; which they did. They may not have expected to be leading at halftime, but a good run and finish from Christian Pulisic after a mix-up between Gündoğan and Benjamin Mendy following a City set-piece gave Chelsea a 1-0 lead shortly before the break.

From a tactical perspective, there isn’t much to say here, apart from City were surprisingly off the pace in defensive transition, while Chelsea were diligent, through strong runners like Pulisic, Willian and Mount. If Frank Lampard’s game plan was to nullify City and catch them on the counter, it worked to a tee in the first half.

The Second Half; Substitutions Change the Momentum

Despite numerical superiority and reasonably progressive passing in the first phase, City struggled to break down Chelsea in the first half. This continued until Guardiola ditched plan A (double pivot and false 9) for plan B: Gabriel Jesus at striker for Bernardo Silva, and David Silva at #8 on for Rodri; leaving Gündoğan as the lone #6. Shortly after, Oleksandr Zinchenko was subbed on for Mendy.

Prior to these changes, Kyle Walker and Mendy were not playing in inverted fullback positions as frequently as they had in other games, as City already had a double pivot in deeper central positions (as opposed to a lone #6). After Pep’s switches, both fullbacks were seen in inverted positions more frequently.

Zinchenko is far more suited to inverted positions than Mendy, thus the substitution was made to compliment the other personnel on the pitch. It helped City pin Chelsea back for a sustained period; a period in which City leveled the scoreline through a stunning free kick from Kevin De Bruyne.

There are two points regarding this free kick that suggest it wasn’t just a ‘lucky’ moment of quality for City or ‘unlucky’ for Chelsea to concede: 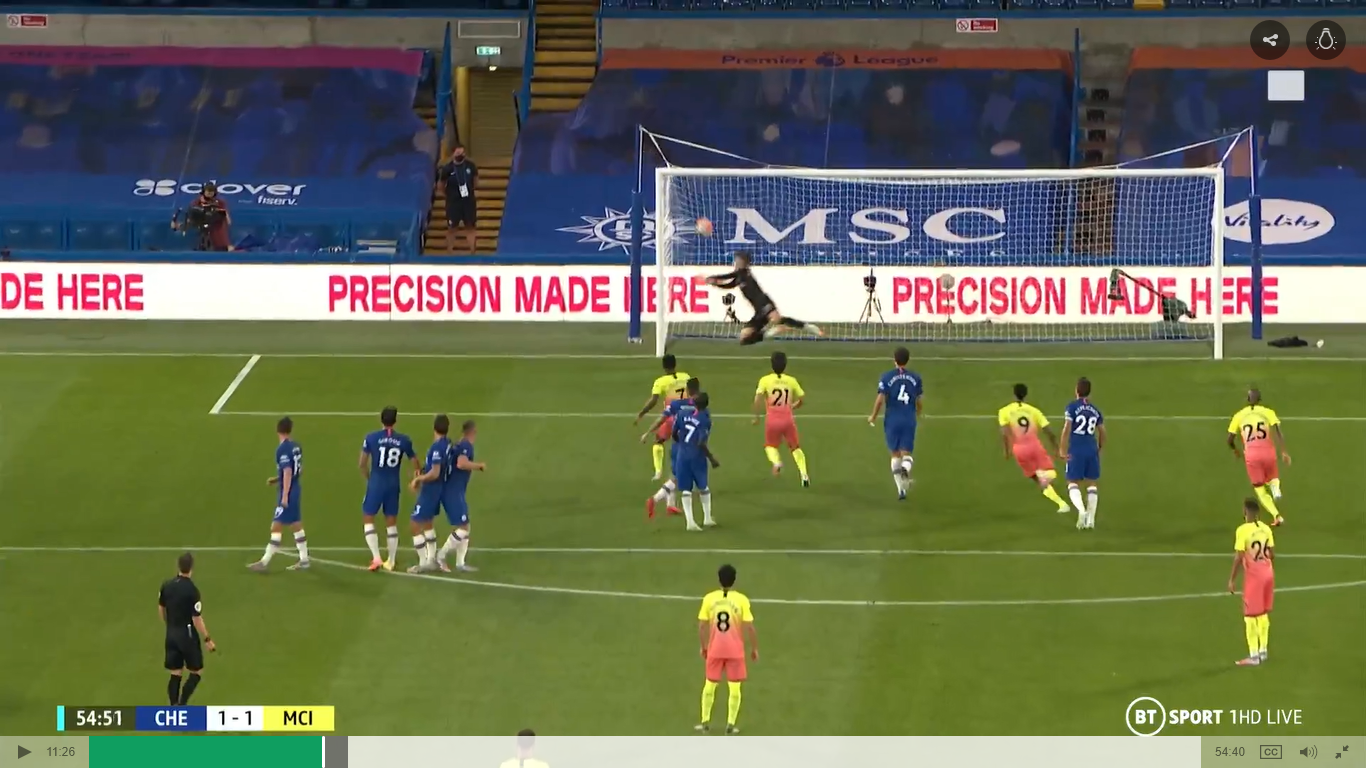 Kepa essentially withdraws his hands from his save attempt in order to not crash into the post. His technique is typically poor as a long-range shot-stopper.

Two minutes after De Bruyne’s 55th minute equaliser, City sprung a counterattack from which Sterling hit the post when he should have scored (or squared a pass to leave an open goal). City remained in control in this period, searching for a winner that would see them stay in the title race for at least another week.

The next 20 minutes saw both teams come close to breaking the deadlock. On one occasion, De Bruyne recovered a loose pass and literally halted the game until City reformed their shape, highlighting the importance of positioning to Pep’s side. After Ederson gave the ball away in the 62nd minute, Mount made the mistake of deciding not to shoot or pass forward, but instead pass it to Antonio Rüdiger, who found himself under pressure and nearly gave away a penalty.

Apart from the occasional counter, Chelsea were on the ropes in this period whilst City controlled proceedings. Slowly but surely, City were prising gaps in Chelsea’s settled shape, as De Bruyne came into the left of midfield to seek out space in the half spaces. The Belgian formed a good duo with Zinchenko down the left, which in turn created space for Mahrez on the right, who carved out several chances and even caused Marcos Alonso to pick up a yellow.

But as City searched harder for a winner, they left more space on the counter. Walker and Zinchenko progressively becoming more attacking (and less inverted) left Gündoğan with too much work to do at the holding midfield spot. Additionally, Lampard substituting Tammy Abraham on for Olivier Giroud was timed perfectly, as Abraham’s pace in behind exposed the 35-year-old legs of Fernandinho.

This gave Chelsea a new lease of life on the counter and carved out numerous chances; the first of which, Walker performed a miracle to clear off the line. Shortly after, Fernandinho performed similar heroics but whilst using his arm, resulting in a VAR-mediated red card and penalty, which Willian subsequently scored. From this point on, 2-1 down and with 10 men, it was goodnight City — in this game, and mathematically in the Premier League title race. 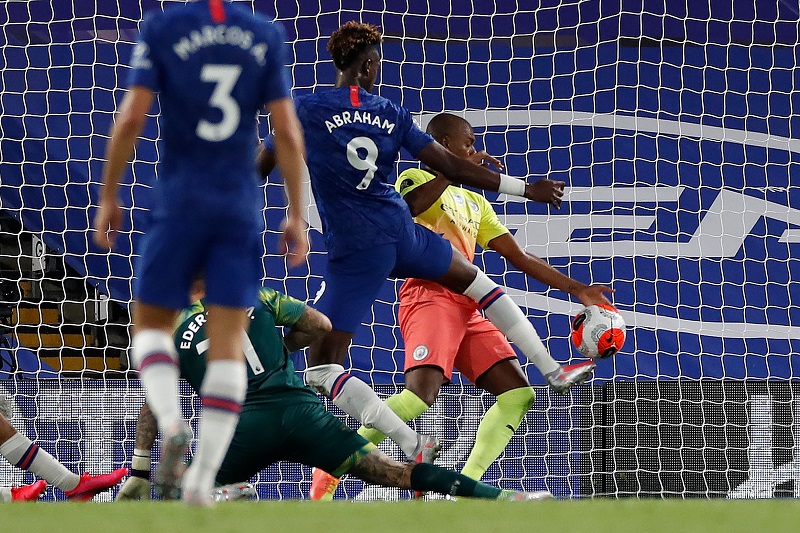 Ultimately, this was a game of control and switching momentum. City and Chelsea both controlled the first half: City with the ball, Chelsea by defending resolutely. Chelsea’s opener came from diligent attacking in transition, but City made changes to re-establish control and dominate territory in the second half; they equalised and proceeded to open up more gaps.

However, just as they looked to go for the winner, Abraham’s introduction gave Chelsea an outlet, which ultimately exposed City’s undermanned defence when they were searching for a winner. This game was a perfect microcosm of the Premier League; a high intensity, balanced tactical battle. It is fitting that it decided the league title.