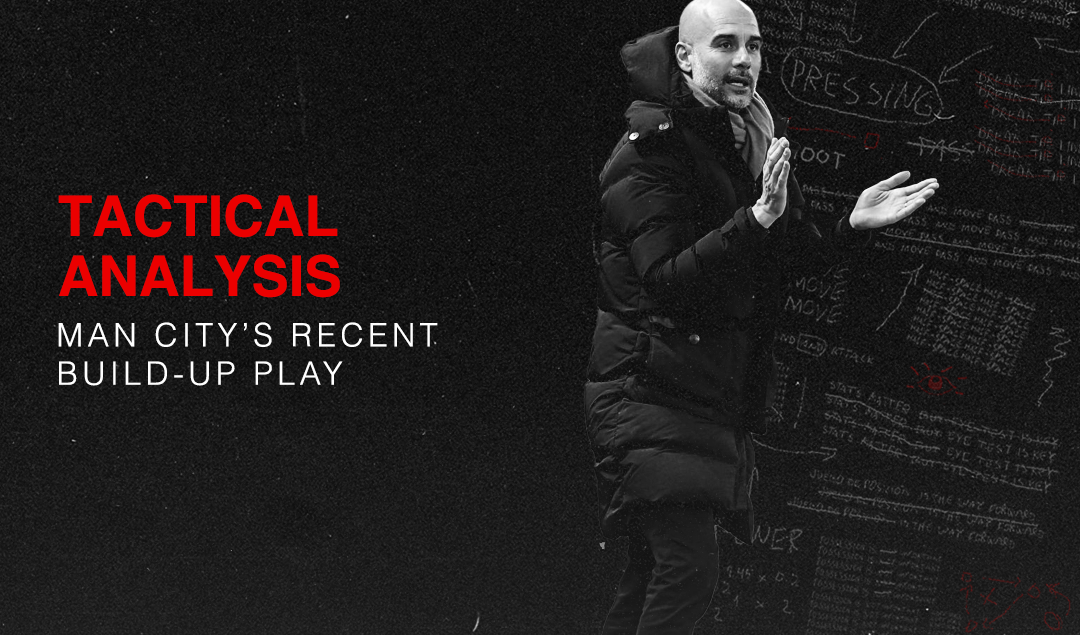 Perhaps the most significant rule change within recent times in football was the adaptation to the static goal kick. As of 2019, outfield players were given the license to touch the ball inside their 18-yard box from a goal kick, rather than having to wait until the ball exited the box. This alteration added a different dynamic to build-up play in general because it allowed the deepest outfielders in possession, typically centre-backs, to start inside the box rather than outside, therefore decreasing the space between themselves and the goalkeeper and on the other hand, increasing the space between themselves and opposition players.

The most significant advantage of the modification to the goal kick rule is that it allows the team in possession to kick-start their build-up play without immediate pressure from the opponent. Beforehand, deep players naturally began outside the box because they were unable to touch the ball until it had left the box; this resulted in immediate pressure from an opponent following their first touch because the opponent had immediate access to the player in possession.

However, the new rule has changed this, as from a defensive perspective, there is a greater amount of space to cover before being able to apply pressure onto the opponent. This essentially allows players in possession more time before being pressured, which acts as a catalyst for the transition between the static goal kick and open play build-up.

The rule change influenced different coaches in different ways depending on their beliefs, but arguably one of the greatest influences it had was on none other than Manchester City coach Pep Guardiola. Throughout his time coaching at the elite level, Guardiola has been well renowned for setting his teams up to play from the back, progressing the ball through the thirds.

We have witnessed a variety of unique build-up structures, with perhaps the most recent innovation being the box setup against Liverpool in the 2019 Community Shield, his first competitive match since the rule modification. The most significant aspect of this setup was the use of the goalkeeper as an outfielder alongside one of the centre-backs to create the deepest line, therefore allowing the spare centre-back to join the pivot to create a box around Liverpool’s first line of pressure.

Firstly, focus will be on explaining the build-up setup used by Manchester City in recent weeks. Firstly, the left centre-back, typically Rúben Dias, begins very deep alongside the goalkeeper to create a ‘double goalkeeper’ setup, whereas the right centre-back, typically John Stones, begins deep and wide on the right hand-side, vacating a position that a right-back would perhaps typically operate in. The wide positioning of Stones allows right-back João Cancelo to take up a central position alongside the defensive midfielder, typically Rodri; this forms a double pivot.

In contrast to the right-back’s inverted position, the left-back holds width, usually starting from a higher position than Stones on the opposite flank. The role of the players beyond this, i.e., advanced midfielders and forwards, will be covered throughout the article. The structure of the setup is outlined below; it is important to note that the personnel within the structure is interchangeable, but the positions of the players remain. 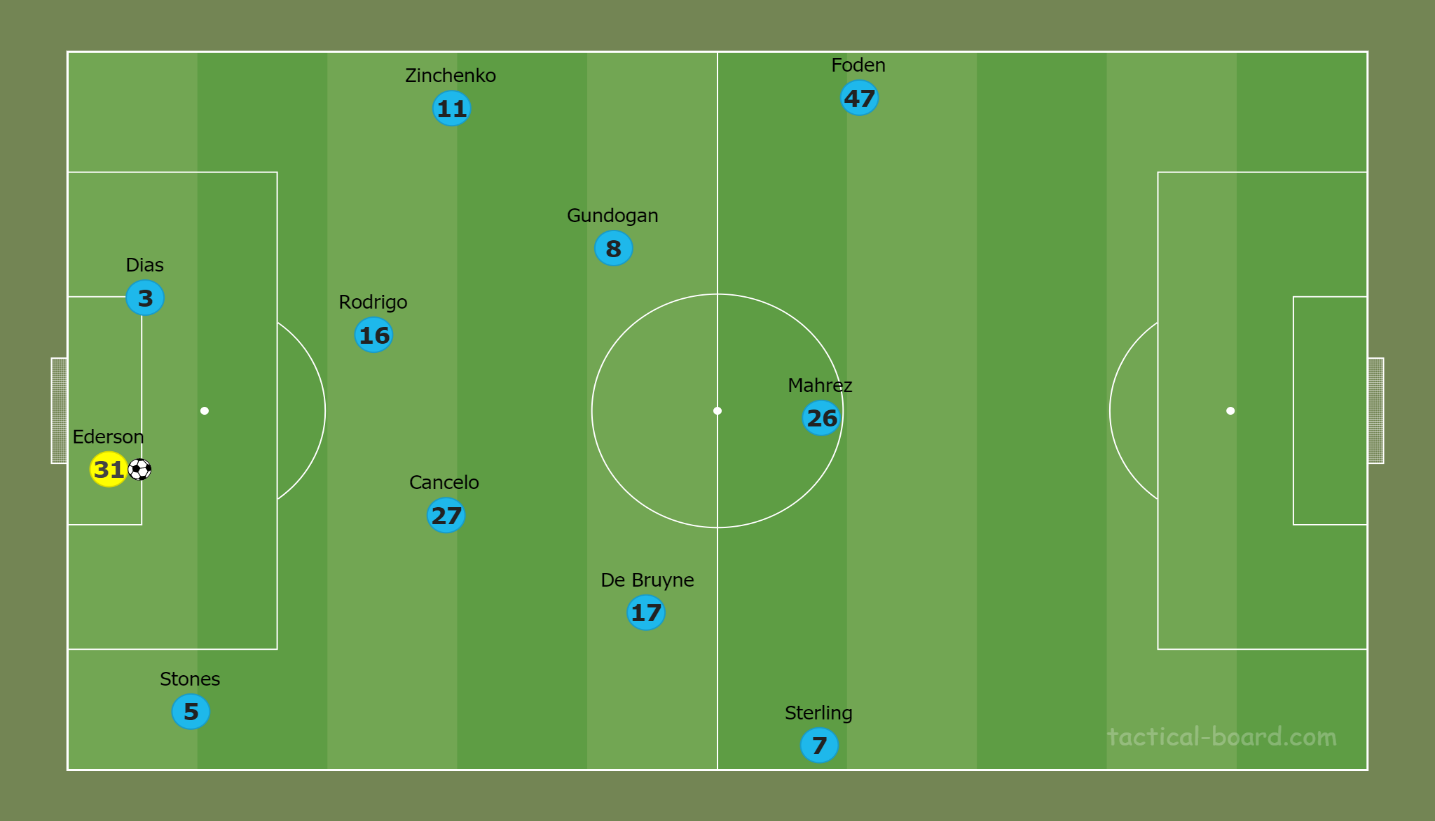 One aspect of the setup which is beneficial is the use of the goalkeeper as an outfielder in build-up play. As aforementioned, Guardiola is well renowned for setting his teams up to play from the back, and a fundamental part of this is the role of the goalkeeper. This is why there is a great demand for goalkeepers to be comfortable and effective with the ball at their feet in the modern game.

The use of the goalkeeper as an outfielder essentially means the opposition cannot prevent every player from receiving without pressure when pressing in a man-oriented manner because there will always be one player spare as the team with possession has the quantitative advantage. If an opposition player opted to press the goalkeeper, there would be a spare man elsewhere.

In addition, the use of the goalkeeper as an outfielder also allows another player to begin in a higher starting position. As the goalkeeper is essentially covering for a defender, it allows an outfield player to begin in a more advanced position; in this case, Cancelo can begin from a higher position due to the knock-on effect of Ederson’s involvement in the build-up. This knock-on effect can continue across, and up the pitch.

This is advantageous because having an extra player begin from a higher position can stretch the pitch vertically which gives the opposition a predicament; drop off and reduce the amount of pressure on the opposition in deep areas in order to maintain vertical compactness? Or press from the front but concede potentially dangerous space between the lines? Ultimately, the extra player can help stretch the pitch vertically and therefore impact the approach of the opponent which can make ball progression simpler. 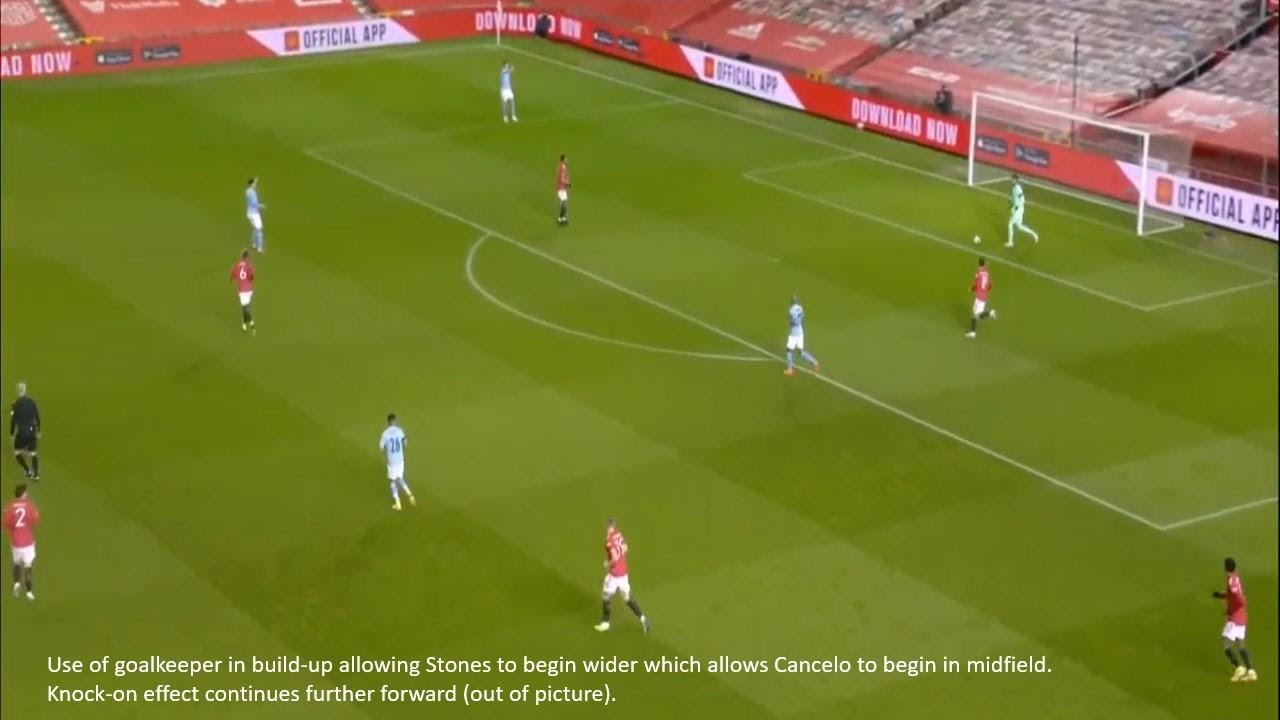 The width that City provide in build-up play means that the opponent must work harder to cover ground horizontally and therefore this naturally increases the distances between the players in the first pressing line. Increasing the distances between opposition players, i.e., causing them to be less compact, makes it easier for City to progress the ball into midfield as passing lanes begin to open. 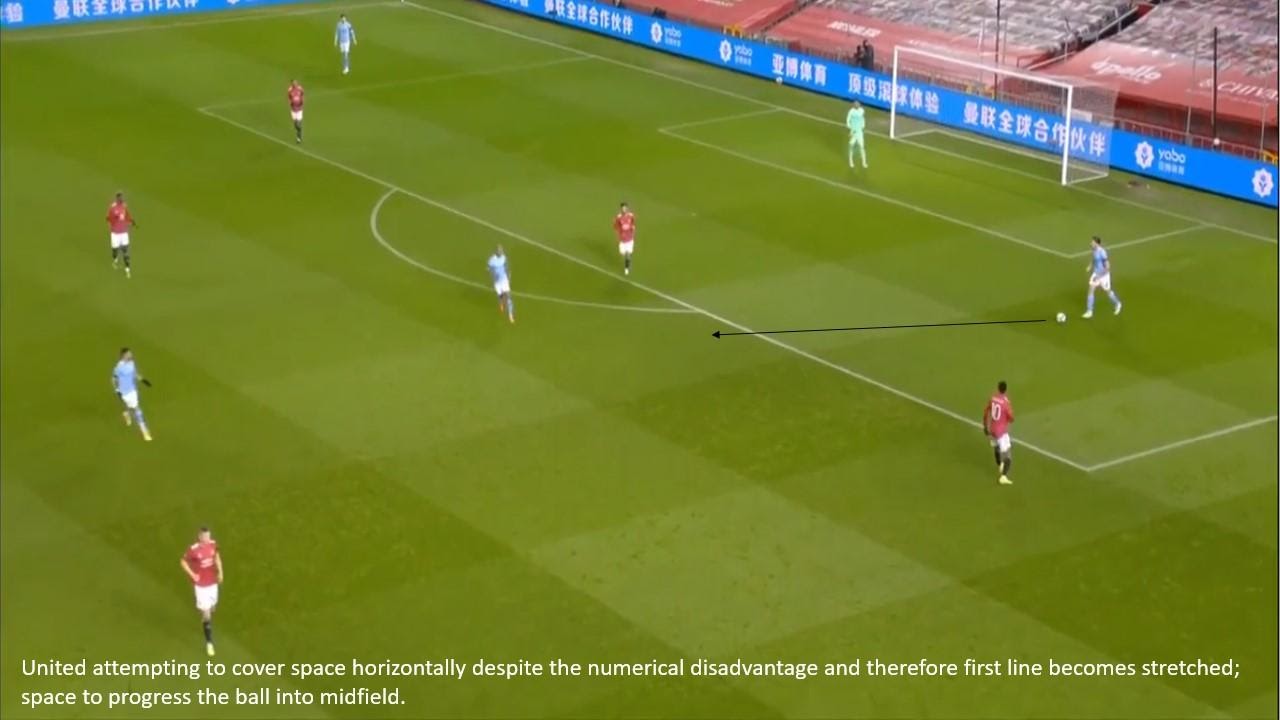 Therefore, most teams opt to cede space out wide meaning the full-backs, in this case, Stones (right) and Zinchenko (left), receive possession without immediate pressure. 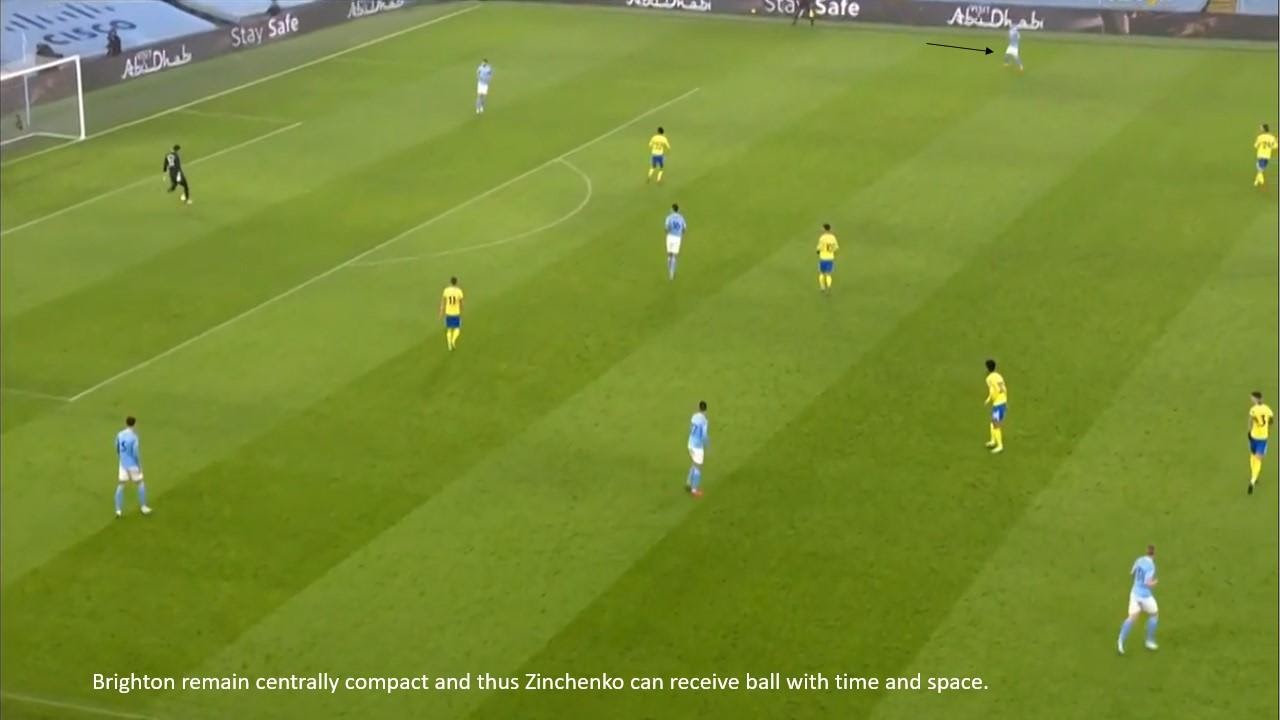 As a result, there is great emphasis on the wide midfielders to pin back the opposition full-backs by beginning high and extremely wide. Pinning is a common tool used in football whilst in possession in an attempt to create space and time for other players to receive possession. This is imperative in this case as it prevents the opposition full-backs from jumping out of position to press the free wide defender. 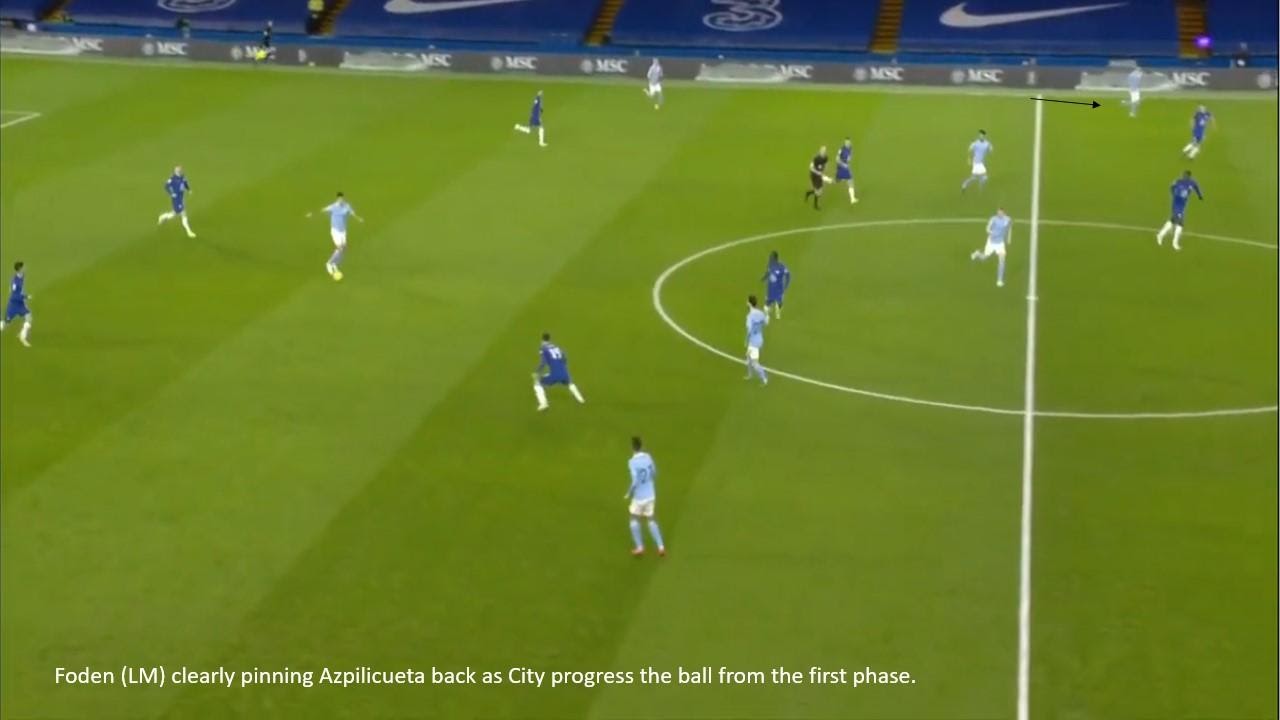 In this case, this is more prominent on the left-hand side due to the asymmetrical shape. Zinchenko typically starts higher than Stones, who occupies a deep position, meaning that the opposition full-back on that side is less likely to jump out of position to press due to the amount of dangerous space they would leave behind. This also requires them to cover more ground before being able to engage Stones in possession and therefore the cons outweigh the pros. Due to Zinchenko’s higher starting position, he would be more prone to pressure from an opposition full-back.

The greatest advantage of pinning the opposition full-backs in this scenario is that it grants the wide and deep full-backs time and space in possession as they are unlikely to be under immediate pressure upon receiving. The free men are always the players who have the greatest chances of progressing the ball due to the lack of pressure they receive. Therefore, this offers Manchester City different avenues, i.e., they can progress down the flanks in addition to centrally, and makes their build-up play more dynamic and more difficult to defend. 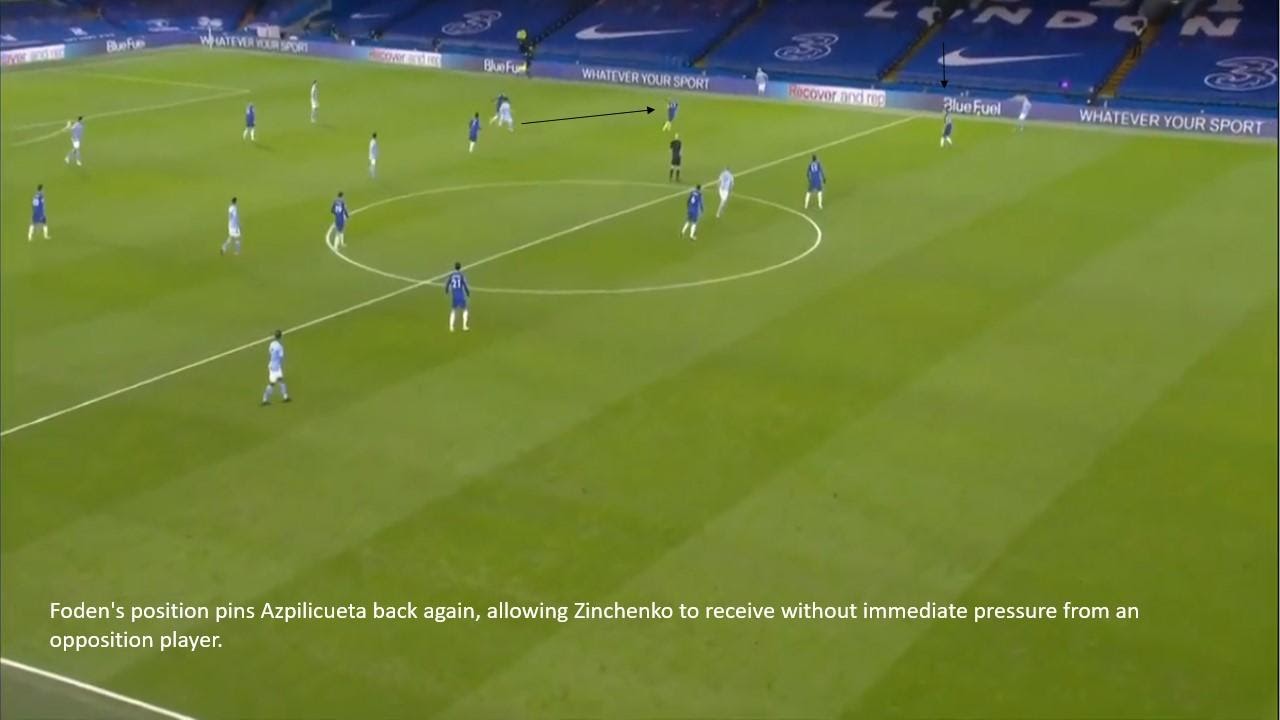 This explains the reasoning behind the wide positioning of Phil Foden and Raheem Sterling (predominantly). However, another reason for this positioning is that they can stretch the pitch, and thus the opponent horizontally. This impact that this has on the opposition backline is similar to the one that the back four has on the front line in that it causes them to cover more space in order to prevent the wide players from receiving the ball without pressure.

However, it is more imperative to cover this space from a defensive perspective due to the more dangerous position of the horizontal stretching. This essentially means the opposition full-backs are forced into marking the wide players tightly and aggressively; they are unable to remain narrow and not mark them due to the serious risk being that if they receive possession in an advanced area, they will have more opportunity to attack dangerous space without being pressured. This is perhaps another reason why the opposition full-backs can be pinned back easily.

The position of Cancelo during the build-up has been intriguing. As aforementioned, Cancelo takes up a central position rather than a wide position that a full-back may typically take up in build-up. His inverted position is imperative to Manchester City’s build play because his position often attracts the left-sided midfielder when the opposition press in a man-oriented manner. This has been present in recent weeks, in matches against Manchester United and Chelsea. 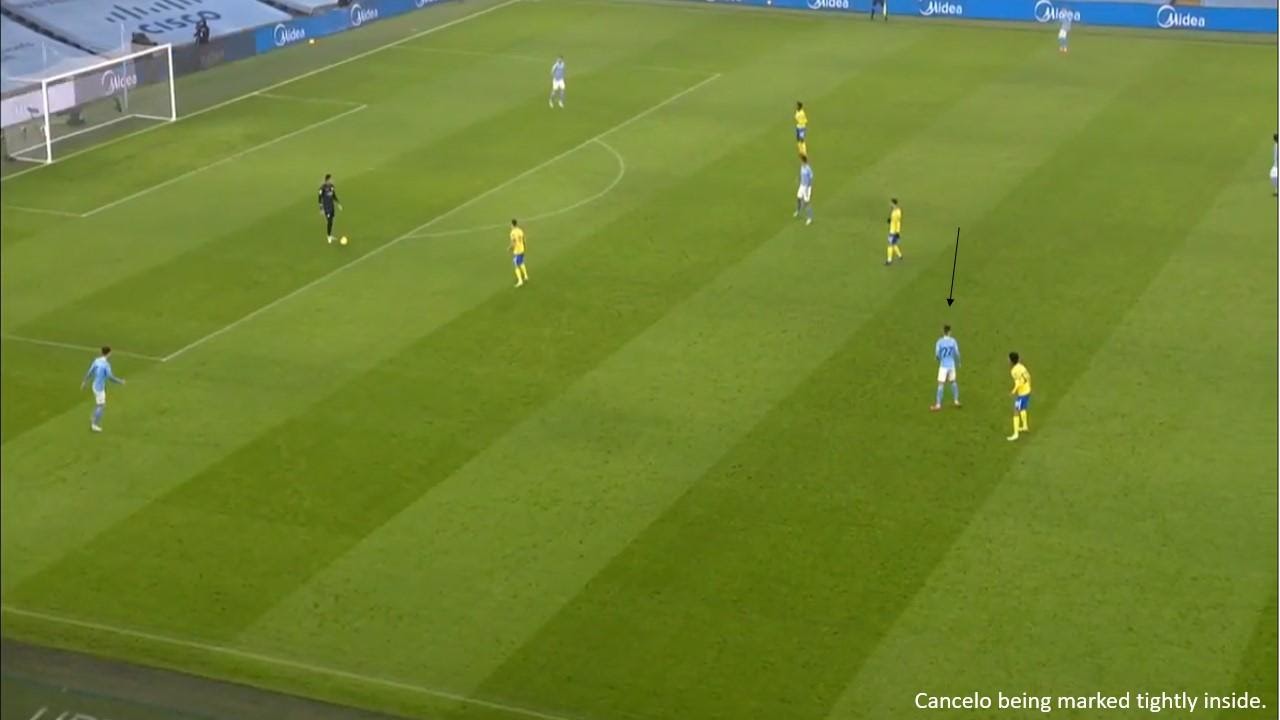 This results in easy access to the right-sided midfielder (predominantly Raheem Sterling) who can drop deep and receive possession from the backline due to the open space on the right flank, created by the central position of Cancelo. Naturally, if Cancelo remained wide, space would be restricted and access to Sterling would not be available. 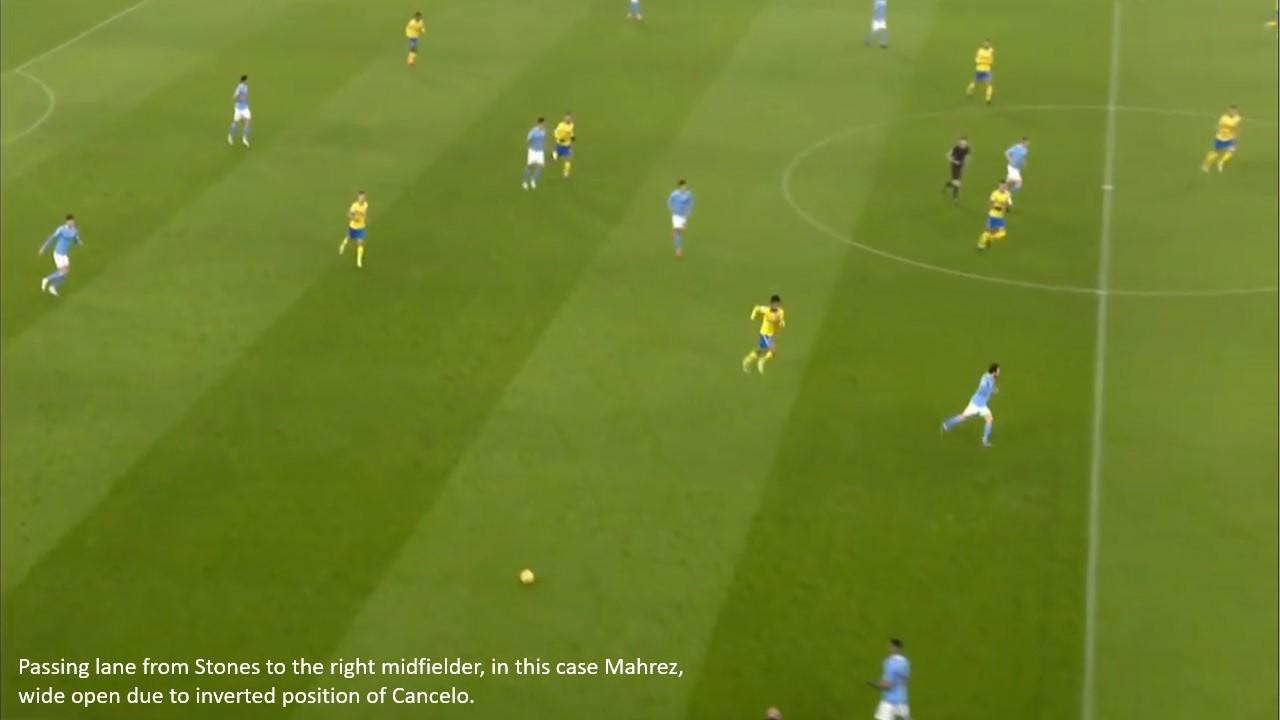 The access to the right-midfielder essentially gives Manchester City a clear way of progressing the ball into the final third via the right flank. This pattern was manifested extremely well against Manchester United.

Firstly, when Sterling begins to drop deep to receive the ball from the backline (John Stones), a bounce pass option must be created inside for when he receives possession. This is because naturally Sterling dropping deep will drag the opposition full-back with him meaning he will be placed under immediate pressure upon receiving the ball. Therefore, there is emphasis on one City midfielder, typically Kevin De Bruyne, to gain a yard on his marker and drop deep in turn with Sterling to support the ball and offer a bounce pass option inside. 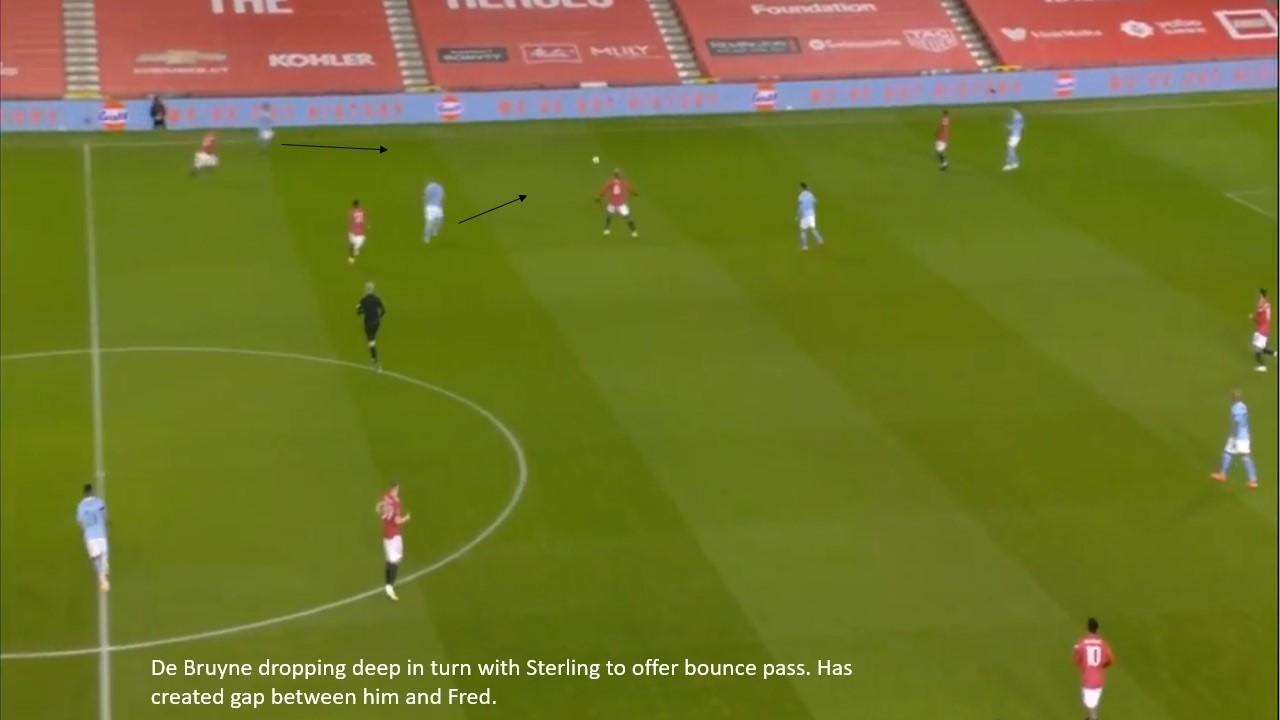 As explained previously, Sterling’s tendency to drop deep to receive possession on the right consequently drags the opposition full-back higher up the pitch and essentially out of his position. Essentially this movement creates space in behind the opposition full-back which can be exploited via a quick interchange between Sterling and the midfielder dropping to support play.

This combination play must be sharp because the space is naturally tight and congested due to the movement towards the ball. This interchange helps City exploit the space behind the opposition full-back and progress the ball into the opponent’s half. 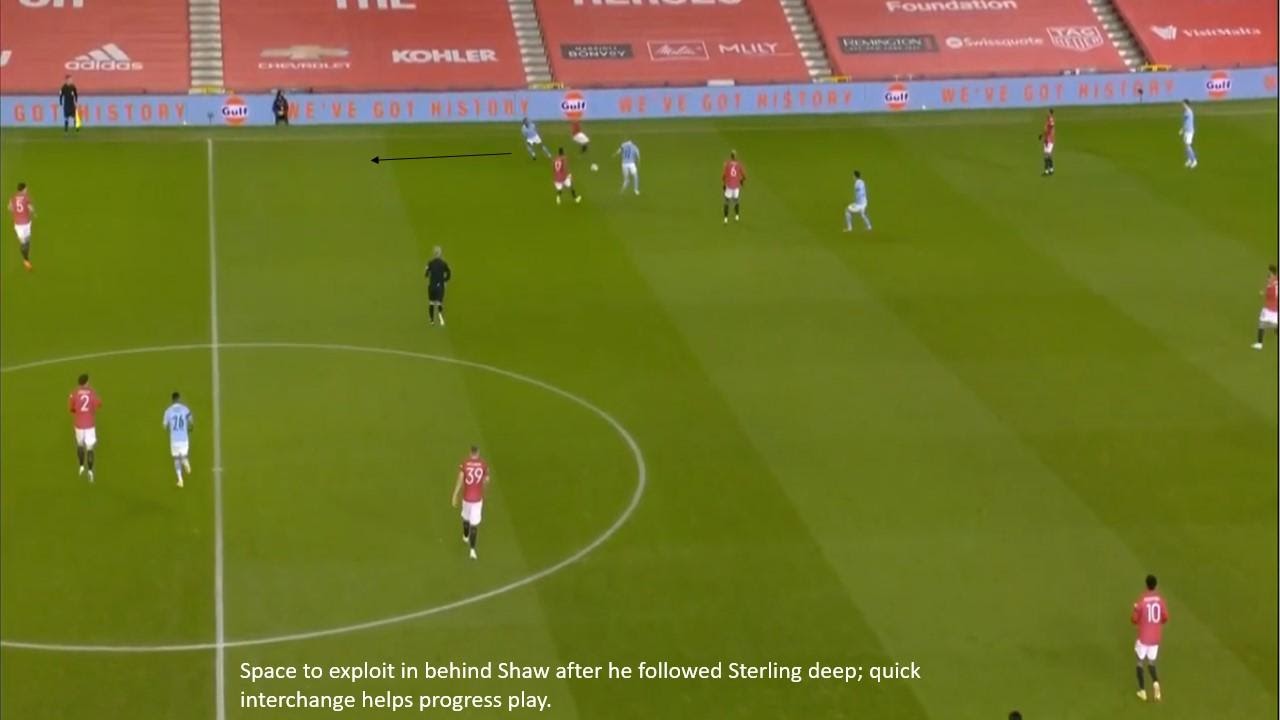 This can lead to the opponent shuttling across to cover the ball side in order to cover the dangerous space that has been created and to engage the ball carrier. Consequently, this naturally leads to more dangerous space being created on the opposite flank which City can exploit via a combination of their natural width created by the starting position of their wingers and runners from midfield. City were often able to exploit the underloaded side against Manchester United, creating dangerous 2v1’s on the left flank following switches from the right after successful build-up play. 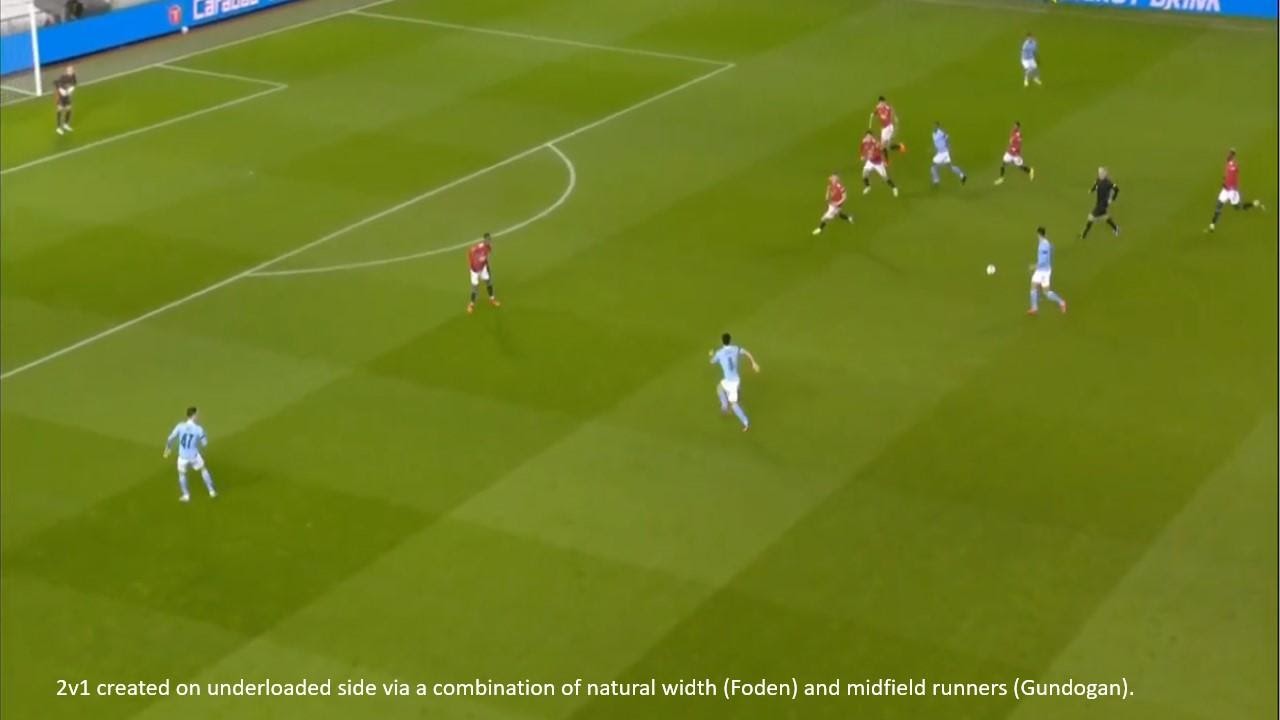 This boils down to the fact that the opponent often cannot cover sufficient space horizontally and therefore a predicament is created regarding where they opt to concede the space. Manchester City evidently have been coached to build down one flank to attack down the opposite.

In summary, Manchester City’s recent build-up play highlights the importance of stretching the pitch horizontally in order to progress the ball. Stretching the pitch horizontally can create space and create free men, giving the opposition a conundrum to deal with. Horizontal stretching is extremely important to Pep Guardiola and has been evident throughout his coaching career in all phases of ball possession, i.e., build-up, second phase, final third.

The value of Cancelo’s inverted starting position is significant as it gives Manchester City a clear and concise route of progressing the ball via the right flank when the opponent presses in a man-oriented manner. This is not to mention Cancelo’s excellent technical security when in possession which also helps City build centrally when the opponent becomes stretched.

Evident throughout has been clear coaching patterns. These build-up patterns are imperative because they allow City to be in control in the first phase. These patterns give City a clear way of progressing the ball from the first phase to the second and eventually into the final third.