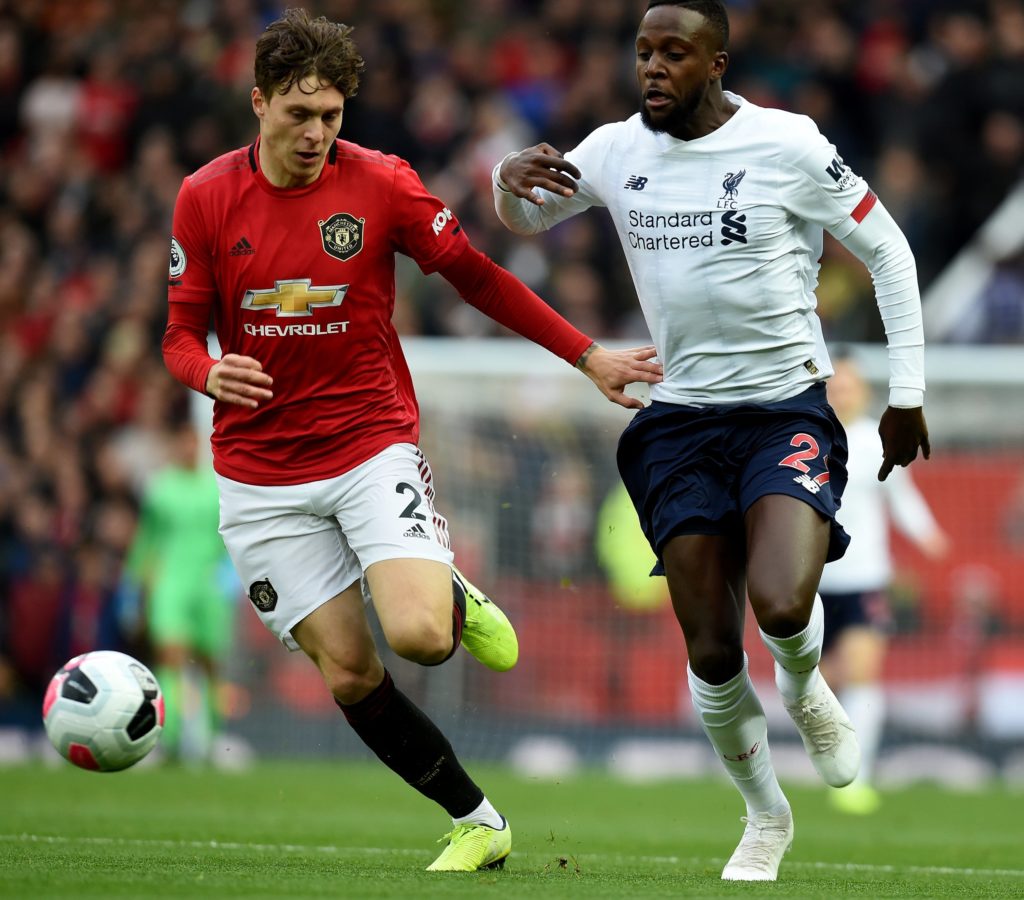 Ole Solskjaer’s Manchester United ended Liverpool’s winning streak at 17, denying the Reds a record equalling 18th victory in a fascinating tactical battle. Perhaps recognising that this team was nowhere close to going toe to toe with the reigning Champions League winners, the Norwegian set up his team in an ultra-defensive manner, and for the large part stopped Liverpool from playing their natural game by blocking off their fullbacks.

Marcus Rashford’s first half goal set United on their way but intense defending for the majority of 90 minutes took its toll on the hosts, as Robertson’s cross was allowed to slip to the far post leaving Adam Lallana with a simple tap-in for the equaliser. Here, I take a look at some of the key tactical battles from perhaps England’s most famous fixture.

Recently, the analytics website StatsBomb ran an article warning of Liverpool’s underlying issues this campaign, highlighting in particular Salah’s return to human levels and the taxing workload of the LFC fullbacks Robertson and TAA. Those are both solid points, but the article failed to grasp the biggest issue of all: the complete lack of fluidity in the side this season.

In the previous campaign, Klopp experimented with a 4-2-3-1 with Salah in the CF role, Firmino as a 10 and Mané/Shaqiri as wingers, and abandoned it as the season went on in favour of the traditional 4-3-3. This caused a lot of people to believe that it was a speculative attempt at conserving Liverpool’s energy that was otherwise expended in their high-octane pressing style, and led them to conclude that a return to 4-3-3 meant a return to the usual system.

Except, that didn’t happen, because LFC didn’t go back to the usual “run like crazy” routine. With Fabinho more or less displacing Milner from the midfield, LFC became a slower, deliberative and altogether more possession-oriented side, adapting to the unique strengths of their CF (Firmino), striker (Salah) and fullback duo.

The core tenets of Klopp’s philosophy – winning the ball back in higher areas and vertical transitions resulting in fast breaks – remained in the team, but a new dimension was cultivated by the German as he sought to make LFC a more balanced team. They succeeded at it too; notwithstanding what Manchester City did during the same period. LFC were no longer the side that started games fast and gave up towards the end; now they were a side who could crack you open after a string of passes.

This is an underrated part of Klopp’s philosophy that is not given enough credit because of the flashier elements of his game, and I like to think that he wouldn’t prefer it any other way. Much rather let opponents think of you as a “clown” than prepare extensively for your team, though rarely do opposition coaches make that mistake these days.

The reason this is important is because this has more or less become LFC’s default mode of play, and all of it went horribly wrong today. The slick passing from the CBs, the runs from the fullbacks, the covering of Fabinho, the clever positioning of Firmino and the jinking runs from the wingers were all missing today, with perhaps the exception of Bobby in the initial stages who caused problems with his movement.

When this happens, Klopp usually breaks out the press, but you can only do that against a side that wants to play. Against United it would be ineffective because they put 10 men behind, and in any case weren’t looking to get the ball and play the game.

My biggest issues were with Fabinho, Henderson, Origi and Firmino, who were the worst of the lot on a bad day for the Reds.

United’s 3-5-2 – with Andreas Pereira behind Rashford and James – did an excellent job of clogging the midfield, and particular credit should go to the tenacious Pereira who blocked passing lanes to Fabinho. Non LFC watchers underestimate the amount of times the ball goes through him; and when he’s not there the CBs are forced to go wide to the fullbacks Robertson and TAA.

This is an issue because both are excellent crossers of the ball who are brought into play in the final third (or in TAA’s case, from deep on the right flank) when wingers lay off passes to them, and getting the ball in the initial phase of build-up forces them to run with the ball.

This wouldn’t normally be an issue but for the fact that they had to face a mass of bodies today; it’s hard for even the best in the world to do that on a consistent basis. To that end, Fabinho being blocked off is the worst thing that could’ve happened, and credit to United for recognising and exploiting this issue.

Two other issues were Henderson and Origi, and I can’t really say too much about the latter because he’s a role player asked to start one of the biggest games in a season for LFC. Simply put, he’s not on the same level as Salah, and while he has good instincts, Shaqiri is rather more preferable when it comes to filling in for one of the front-three.

The Swiss winger is much better at receiving the ball and turning under pressure and linking play across the final third; he could’ve been the key to picking United’s lock if he had been available to start alongside Mane and Firmino.

Henderson on the other hand is an issue, because while the skipper has put in some excellent performances over the years its games like this when his limitations become apparent. There was instance in the first half where a pass to Mane on the right would’ve seen the Senegalese in quite a bit of space – instead, he didn’t even look up, passing the ball to the oncoming TAA.

It was a crucial moment that allowed United to recover and regroup; and it summed his performance up today. The man who replaced him, Lallana, actually got the winning goal, so in a way I suppose it could’ve been worse.

Ultimately though, Klopp’s tactical and personnel changes – he went to a 4-4-2 when he introduced Oxlade-Chamberlain and put in Lallana as well – won the game, though it was more about taking advantage of United’s mental and physical fatigue by that point. United could still have gotten the winner here, but it needs to be remembered that LFC helped them massively by losing the slickness and fluidity that so wonderfully characterised the second half of the 2018/19 campaign.

It wasn’t a win but you won’t get that Ole Gunnar Solskjaer’s reaction; this was massive point for the hosts who fought every inch of the way for it. LFC were sloppy but United still needed to take advantage of it, which was easier said than done especially when you consider their goalscoring troubles. Today, it was a sound performance, and credit to them for setting up intelligently.

Ole went for a 3-5-2 formation, with Young and Wan-Bissaka as the wing-backs on either side of a three-man defence of Lindelof, Maguire and Rojo. Sitting in front of them as a pivot were Scott McTominay and Fred, and ahead in the ‘10’ role was the Brazilian, Andreas Pereira. Dan James and Rashford operated as wide strikers with license to switch positions, but for me, this was a match defined by Fred’s grit and Pereira’s refreshing zest.

Neither James nor Rashford are ball progressors; they rely on it being played into space in front and use their pace to beat their man and get the shot away. To that end, they needed to create for them, which is a role that Pogba played until his injury. Today, it was Pereira who did that, albeit in a slightly different manner.

By playing on the shoulder of Fabinho and making constant runs beyond the striker, the midfielder kept up pressure during LFC’s build-up; in addition to offering a constant presence in and around the final third as a passing option. A lot of United’s attacks flowed because Andreas occupied little pockets of space in front of the LFC defence, which the CBs couldn’t pick up because of the preoccupation with James and Rashford.

This meant Pereira was the one playing ‘cute’ passes into the final third, and was the orchestrator of much of the chaos United caused. He performed his role admirably, and credit to him that he stepped up in such a high-profile fixture.

Fred put in an immense performance today, ensuring that United stayed compact by denying space to Fabinho and Henderson. Wijnaldum was usually the most dangerous/advances of the MF, and McTominay (playing much like Nemanja Matic) sitting just ahead of the United defence was able to keep him from causing much harm.

But Pereira’s aggression and the naturally high positions of the strikers meant that space would open up between the pivot and the ‘10’ zone, which Fred denied by intelligently occupying it when called upon. He did this by pressing alongside Pereira in the middle and dropping immediately to add a body when LFC broke anyway, and he needs to be appreciated for a fine display especially after all the criticism that’s gone his way.

Rashford got the goal but James found him twice with excellent diagonal crosses, and I hope United get an actual coach to improve the clearly talented Welshman. We didn’t get to see too much of him with the ball but he did his job well when it came to passing and off-ball presence, always offering an outlet to Young and Fred. It was an exquisite delivery for the goal as well, especially when you consider that it was in swinger from deep.

Essentially, United played well by holding their position and staying intensely physical to the point of the exhaustion, because that’s what such committed defending asks of you. They *could* have grabbed all three points but perhaps that was too much to ask for given the grueling defensive work they put in; all in all, a draw against the league leaders (and overall an infinitely better side, if not on the day) should be a satisfying result.