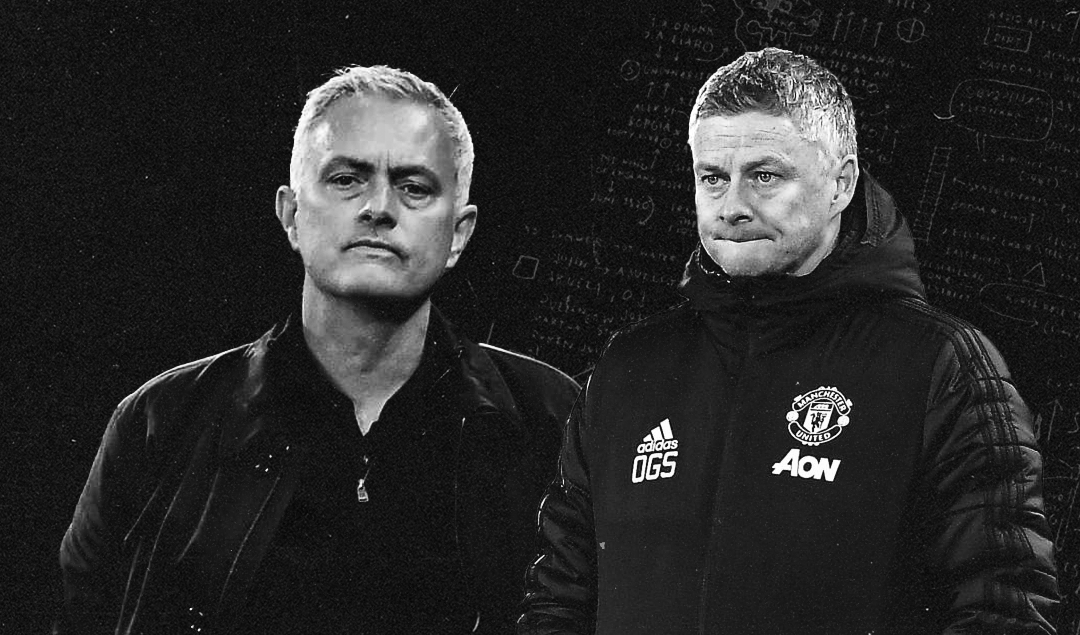 With the Premier League returning last week, Manchester United took on Spurs in which was the most anticipated fixture of the weekend. Both sides were bolstered by the return of key players from injury in the form of Paul Pogba and Marcus Rashford for United, whereas Heung-Min Son and Harry Kane also recovered from their long term injuries for Spurs.

I will be taking a look at the tactics deployed by both the managers and how it affected the match throughout.

Both sides lined up in 4-2-3-1 formation as Ole Gunnar Solskjaer benched Pogba and instead opted for a double pivot of Fred and Scott McTominay. For Spurs, Erik Lamela came in for the suspended Dele Alli. 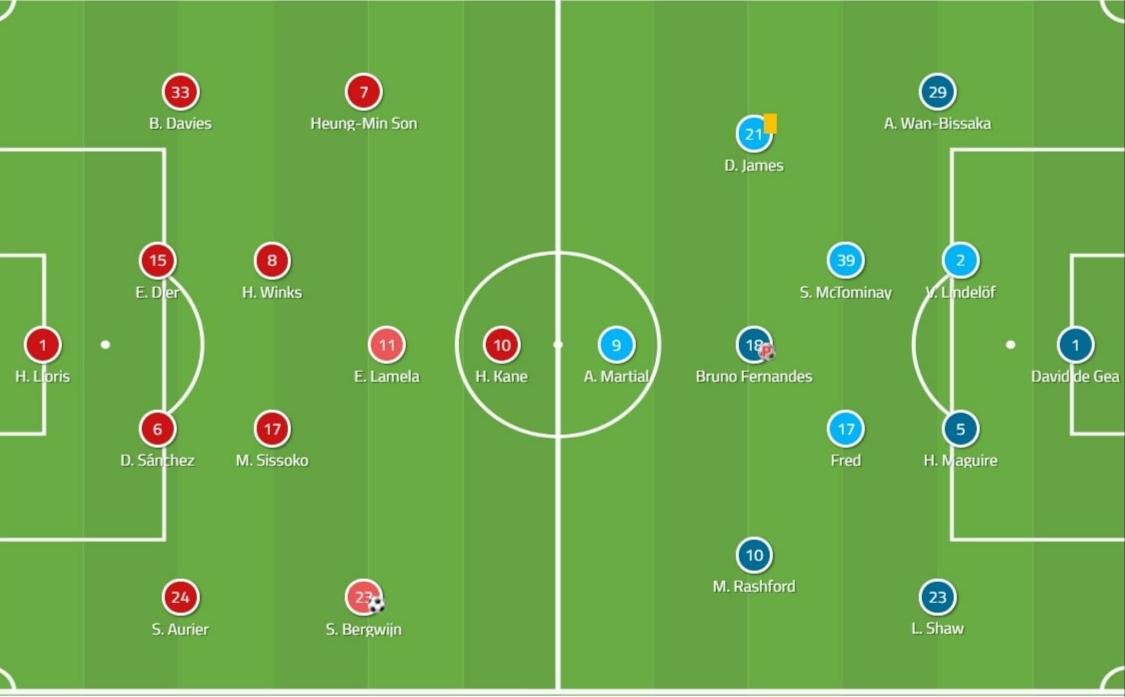 Since José Mourinho replaced Mauricio Pochettino as manager, Spurs have opted for an asymmetrical buildup shape with the left back tucking in to form a back three in possession which in turn allows the right back to move high up the pitch while the right winger tucks inside. Spurs then look to overload the left side of the pitch and switch it to the right where they can often find Serge Aurier high up the pitch in vast amounts of space.

On the other hand, Manchester United looked to press high up the pitch with a man-oriented setup. The front three would press Spurs’s back three while Bruno Fernandes would tightly mark Spurs deepest midfielder (Harry Winks) which forced Spurs to play out wide. As soon as the ball was played out wide, United’s fullbacks would step up to press their opposite number. McTominay and Fred would cover central spaces and passing lanes or the space left in behind the fullbacks whenever they went to press forward.

This was a high-risk strategy deployed by United, and if Spurs were able to play out of the press and switch it to the opposite flank (mostly done by overloading on the left and switching to Aurier on the right who would be free in space) it would cause huge problems for United’s backline to timely shift across in their normal shape.

Lamela then plays it into Steven Bergwijn who plays it into the dropping Kane who can then switch the play to Aurier on the right. 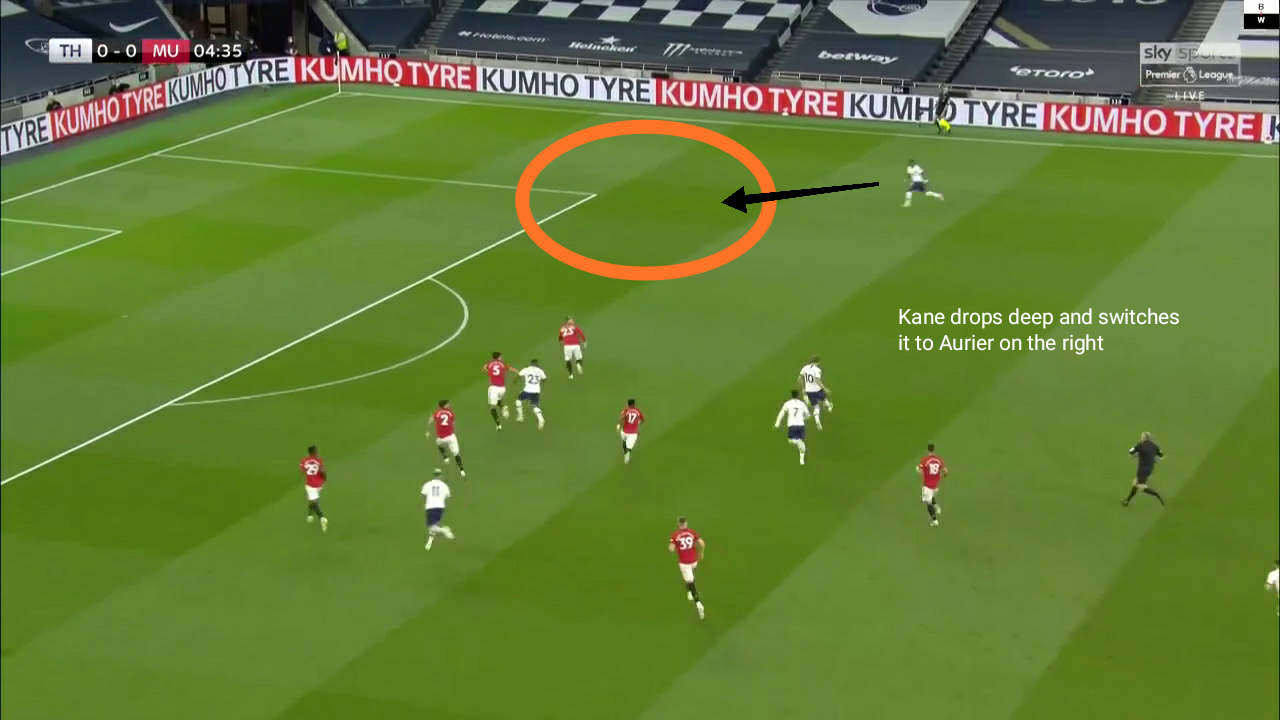 Another example of overloading on the left and switching it to the right occurred right before the end of the first half: 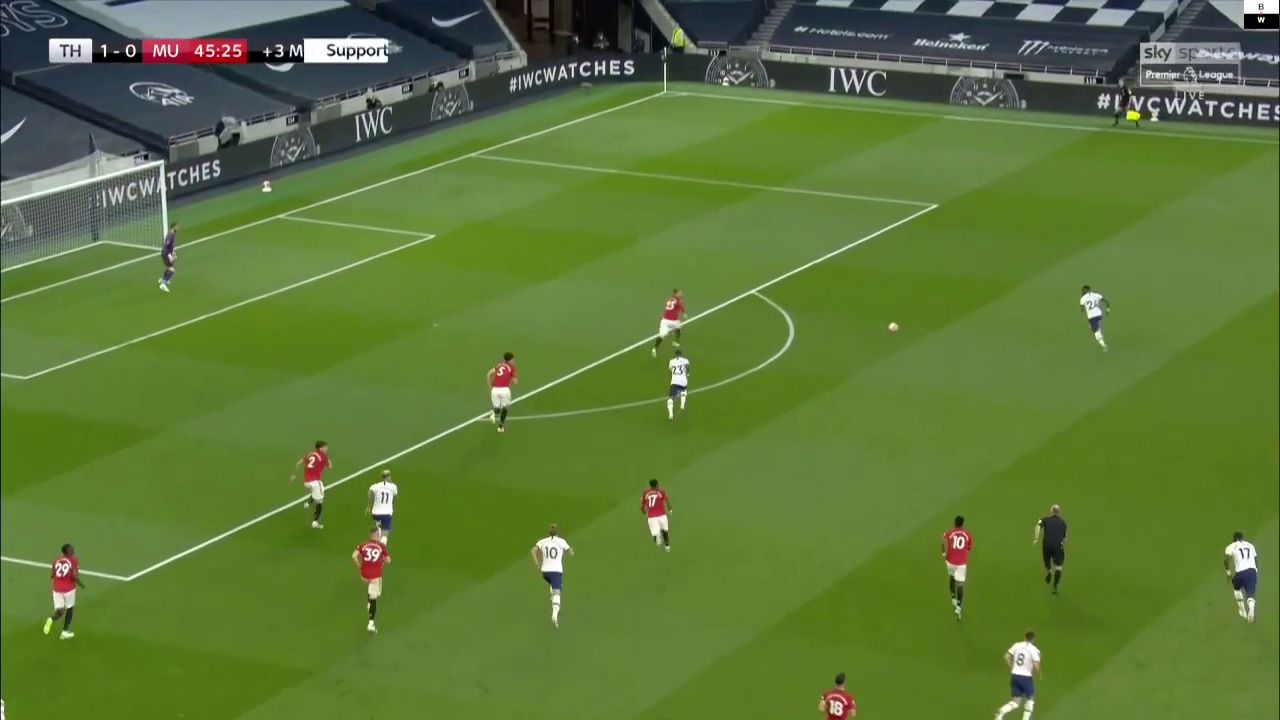 Even when Aurier received the ball in deeper positions and Luke Shaw was in a position to press, Bergwijn was ever present to make the underlapping run and cause Harry Maguire problems. 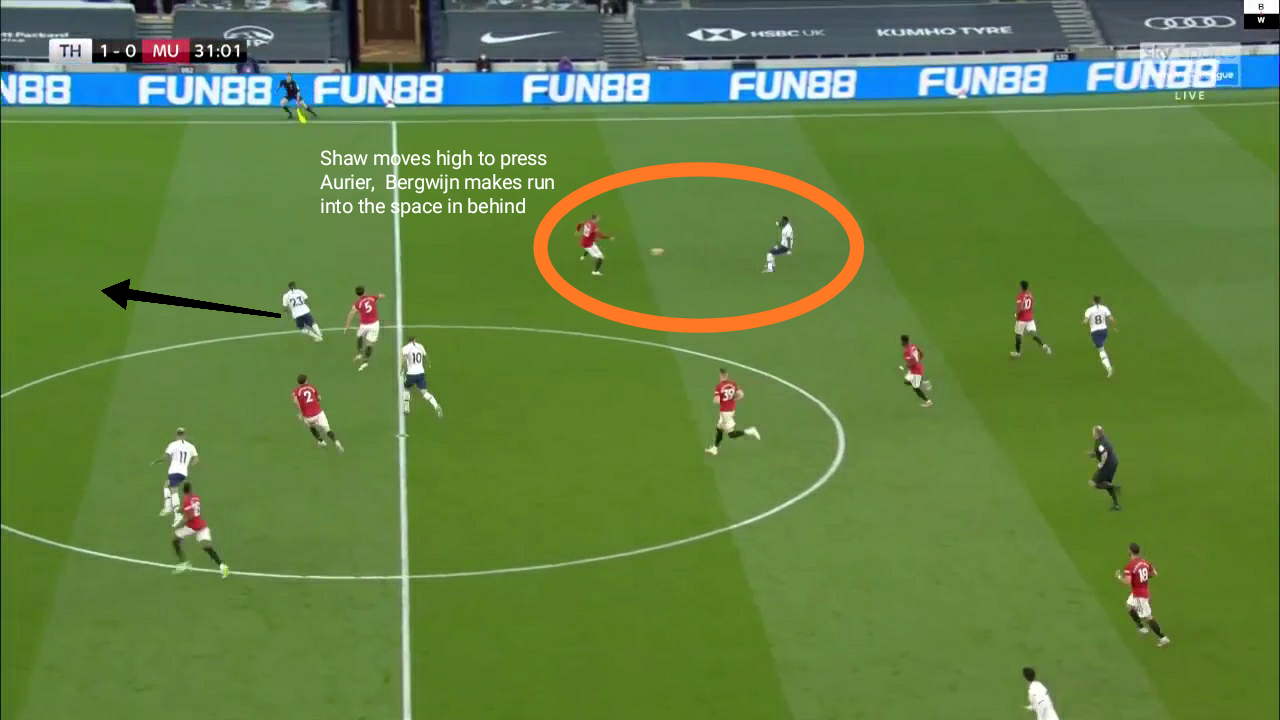 Part of the reason for this 2v1 overload on the right side was that Rashford never retreated back on the wing out of possession and was often United’s furthest forward. 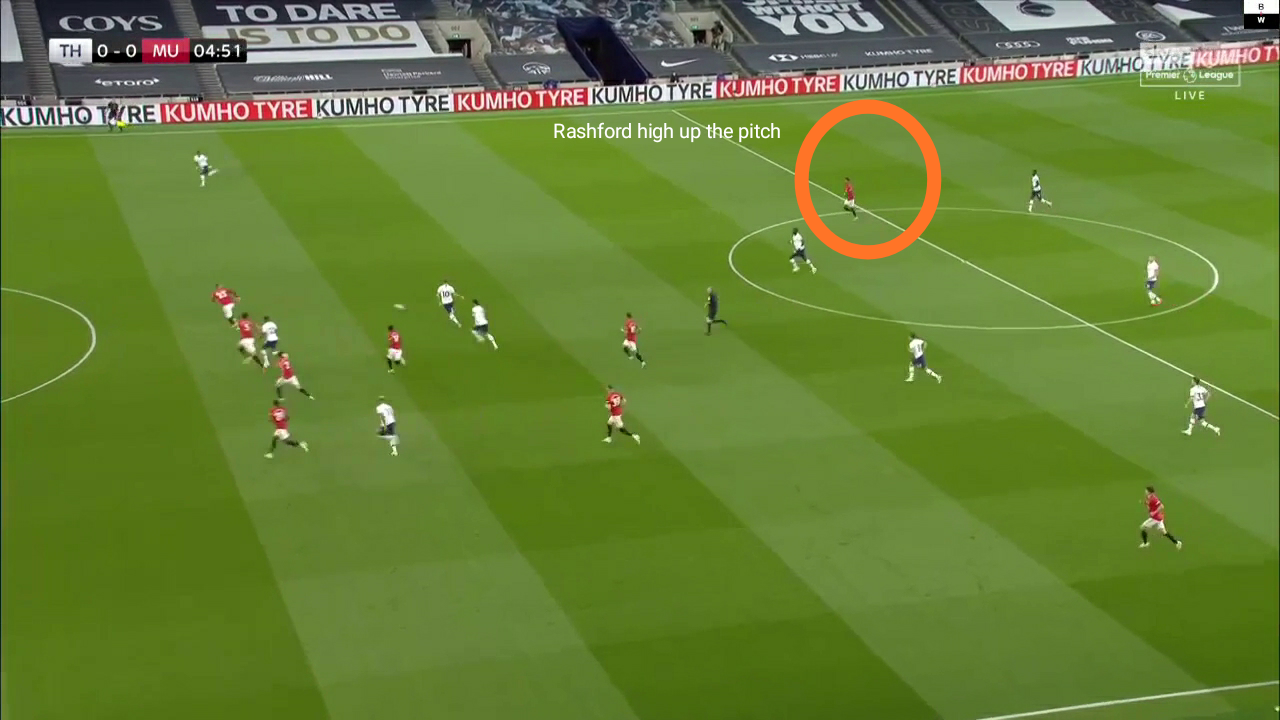 On the flip side, there was clearly an advantage of having Rashford high up the pitch; in case United turned possession over, Rashford would be optimally placed to receive in behind Spurs’s defensive line during offensive transitions.

The best example of this situation occurring was during the last 10 minutes of the game where Pogba found Rashford will a lovely ball in behind Spurs defense after a turnover near the halfway line. 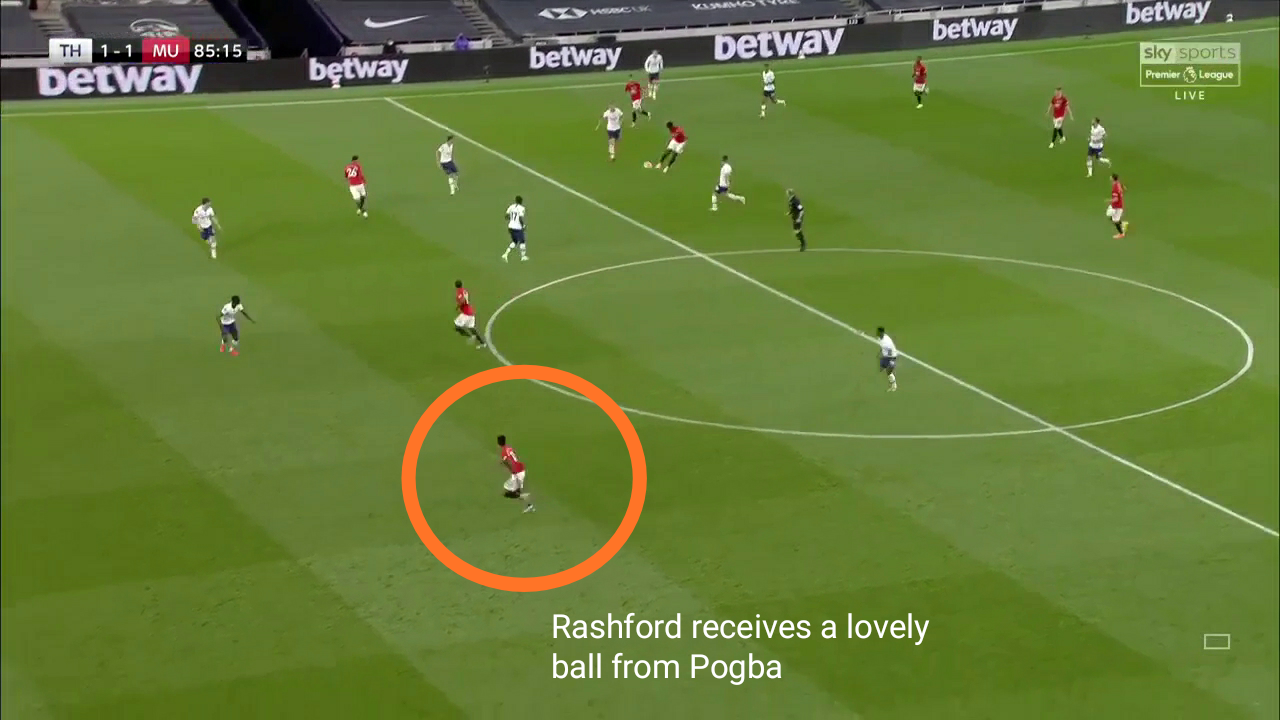 It was clear from the start of the game that Solskjaer and his coaching staff had worked on altering the build-up structure during the two-month break. Similar to Spurs, United built with a back three with right back Aaron Wan-Bissaka tucking inside as the right centre back in possession. 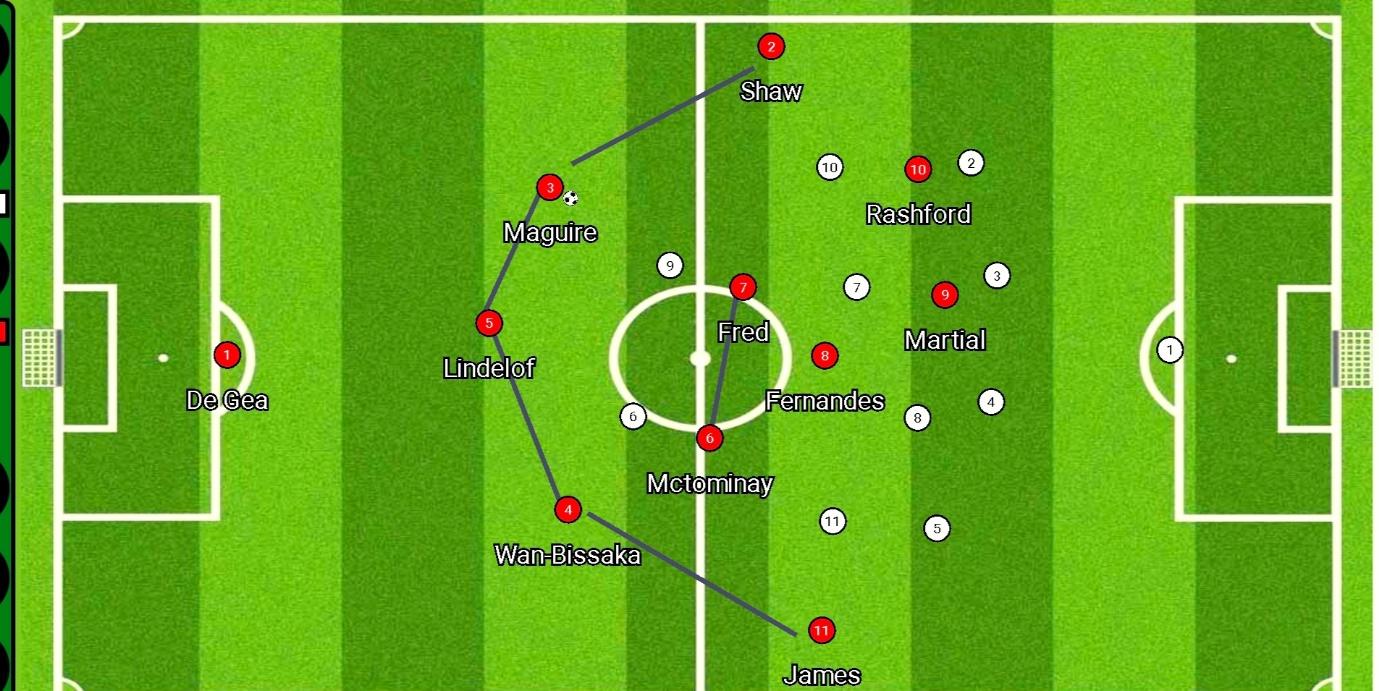 The back three allowed United to progress the ball against Spurs 4-4-2 shape.  This in turn allowed the outside centre back (usually Maguire) to dribble into midfield. 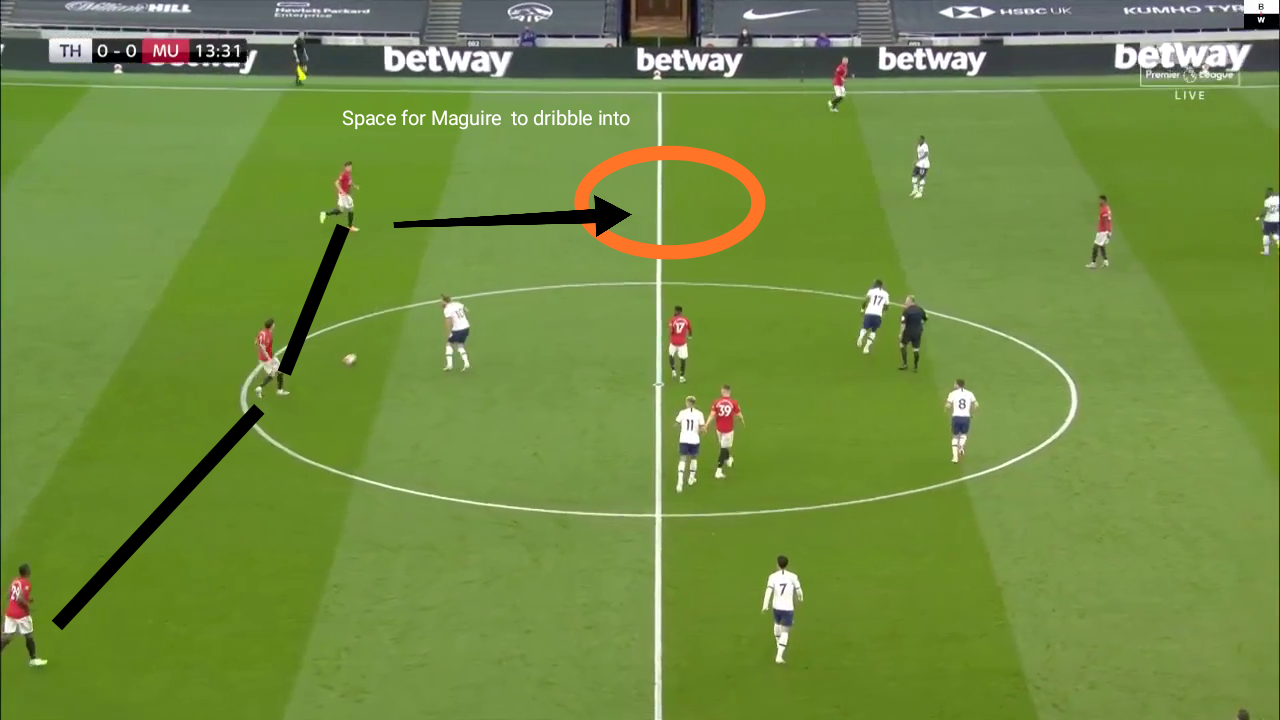 Spurs defended in a 4-4-2 mid/low block with Mourinho deciding to remain compact instead of pressing high, encouraging United to break down their low block.

The front two left didn’t press United’s centre backs but instead decided to block off passing lanes to the double pivot of Fred and Mctominay. United would try to combine on the wing with Rashford and Shaw often rotating positions.

One would stay wide on the touchline to offer a direct passing option to Maguire and attract Aurier to press in the process. The other player would then make an underlapping run to exploit that space in behind left by Aurier. 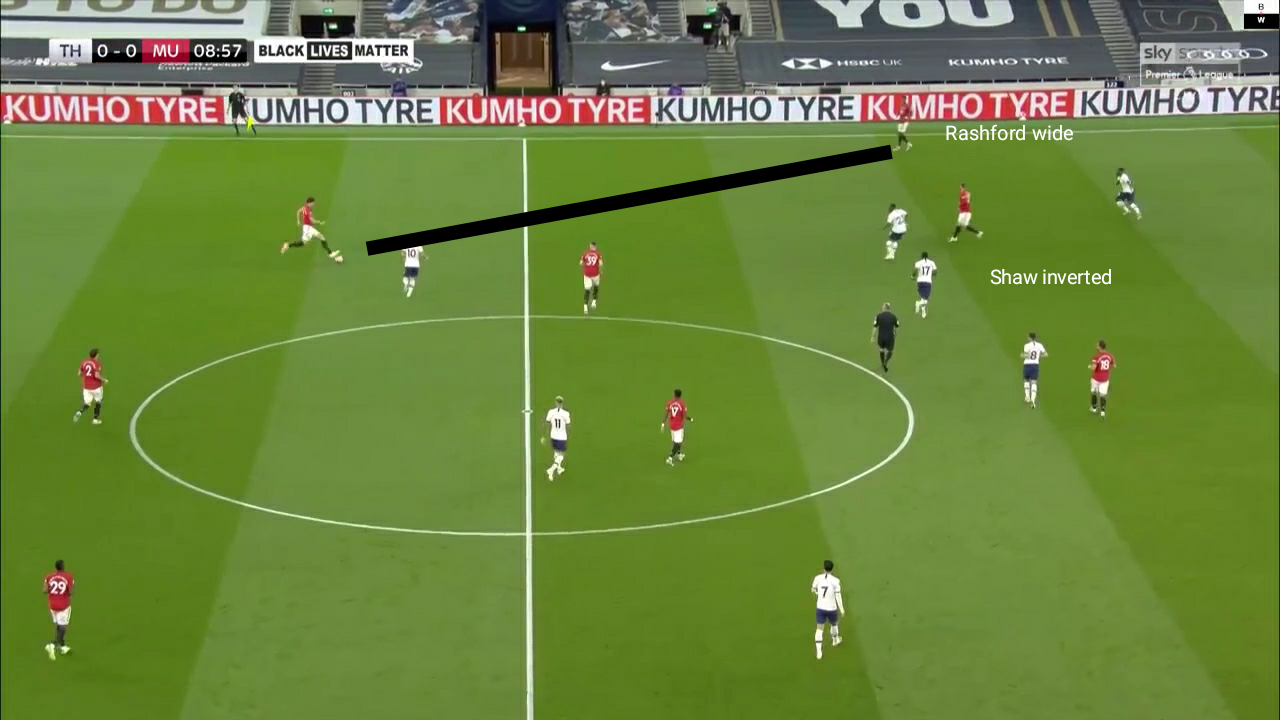 But Spurs were disciplined enough and were able to identify the underlapping runs and prevent it. Moussa Sissoko would follow the run and prevent the ball from reaching the player. 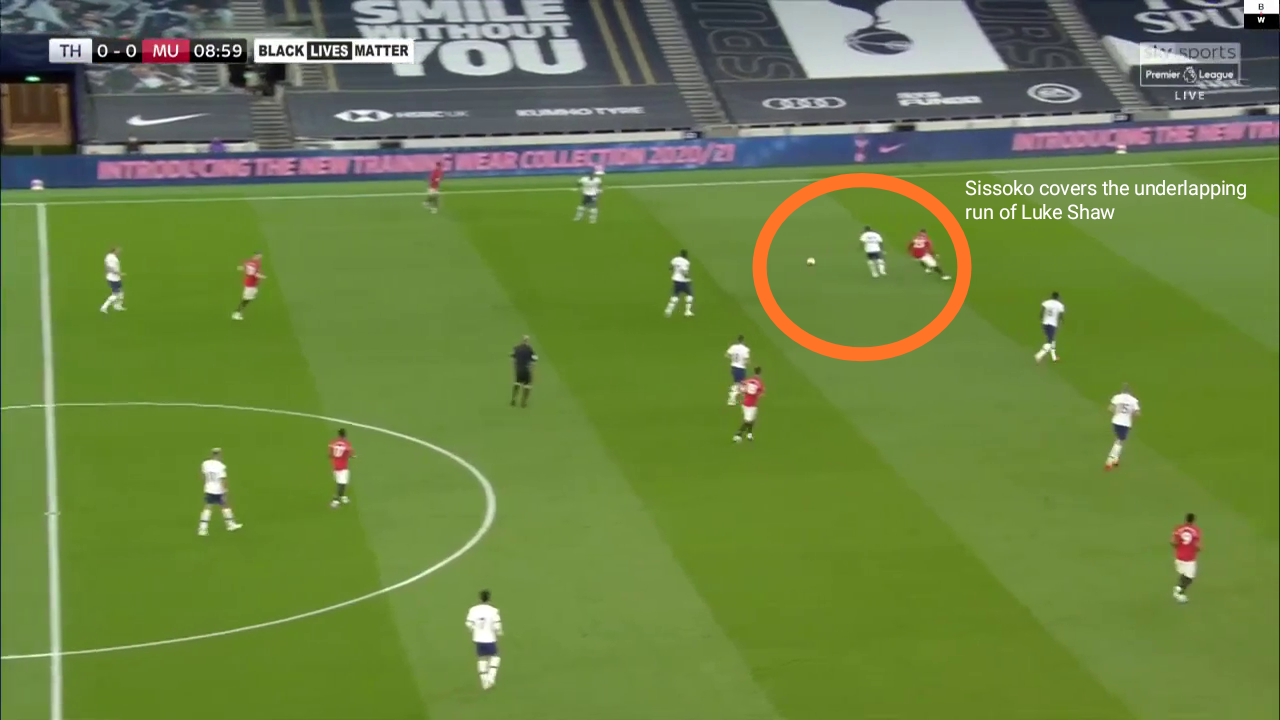 Later in the half, Bergwijn would also drop deeper to help out Aurier and Sissoko, thus blocking United’s progression from the left.

United struggled to generate any chances from their right wing due to their asymmetric build-up shape, which created an imbalance on the flanks. United had two players on the left flank as opposed to only one on the other (Daniel James).

James had little to no support and was immediately pressed from Spurs left back Ben Davies upon receiving the ball. On most of these occasions, James’s body orientation wasn’t ideal and a result he had to pass backwards. 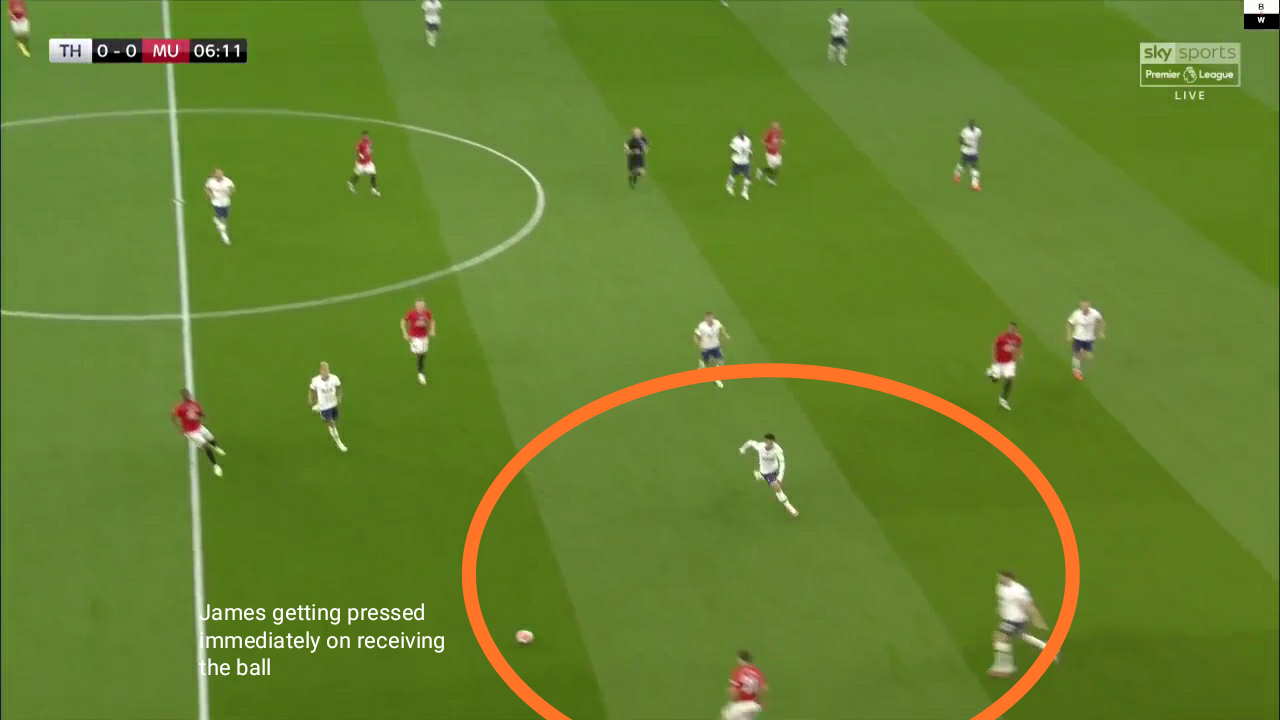 Just like on the other wing, United would also look to utilise the space in behind the full-back (in this case Davies) when he went to press high. This time, Winks followed and marked the run of Fernandes, thus preventing any dangers from occurring. 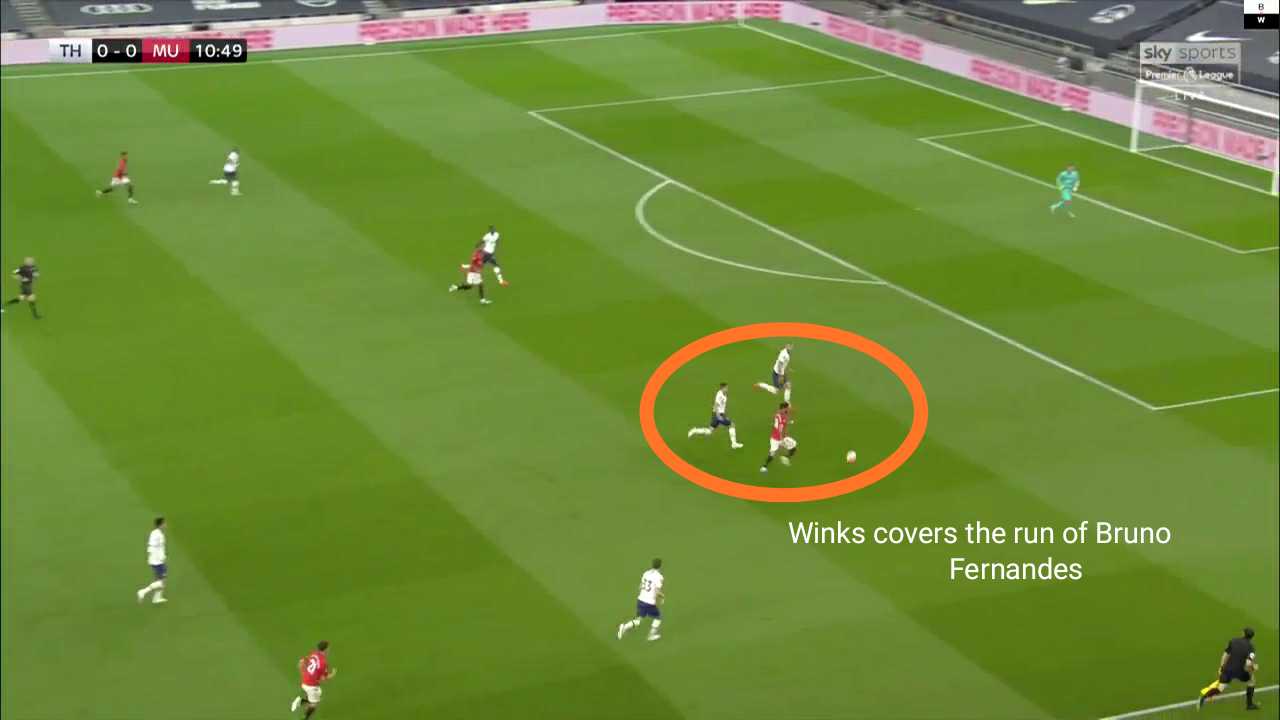 Shortly after, Bergwijn capitalised on individual errors from United in defense (specifically Maguire) and fired past a hapless David De Gea to put Spurs ahead going into the break.

Solskjær and his coaching staff were able to identify the problem that the asymmetric shape created. They decided to alter the shape; instead of Wan-Bissaka, McTominay would drop in to form the back three. This allowed Wan-Bissaka to move high and wide with James shifting infield.

In turn, United were able to use the right flank much more effectively than they were able to in the first half. This small but effective tweak enabled United to push Spurs deeper into their own half. 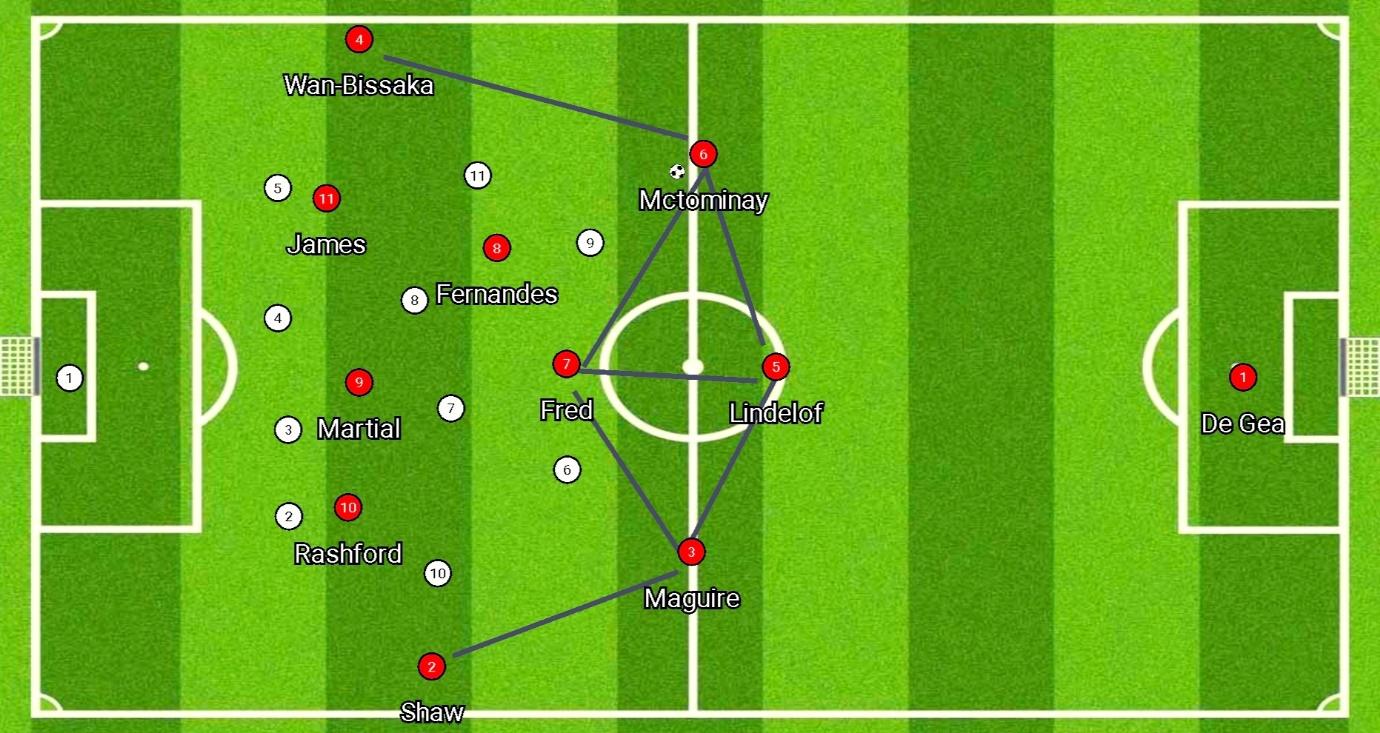 As United asserted themselves more and more in the opposition’s half, Mourinho opted for a more defensive approach. Now, the wingers would track all the way back to track runners and to prevent United creating any overloads on the flanks. 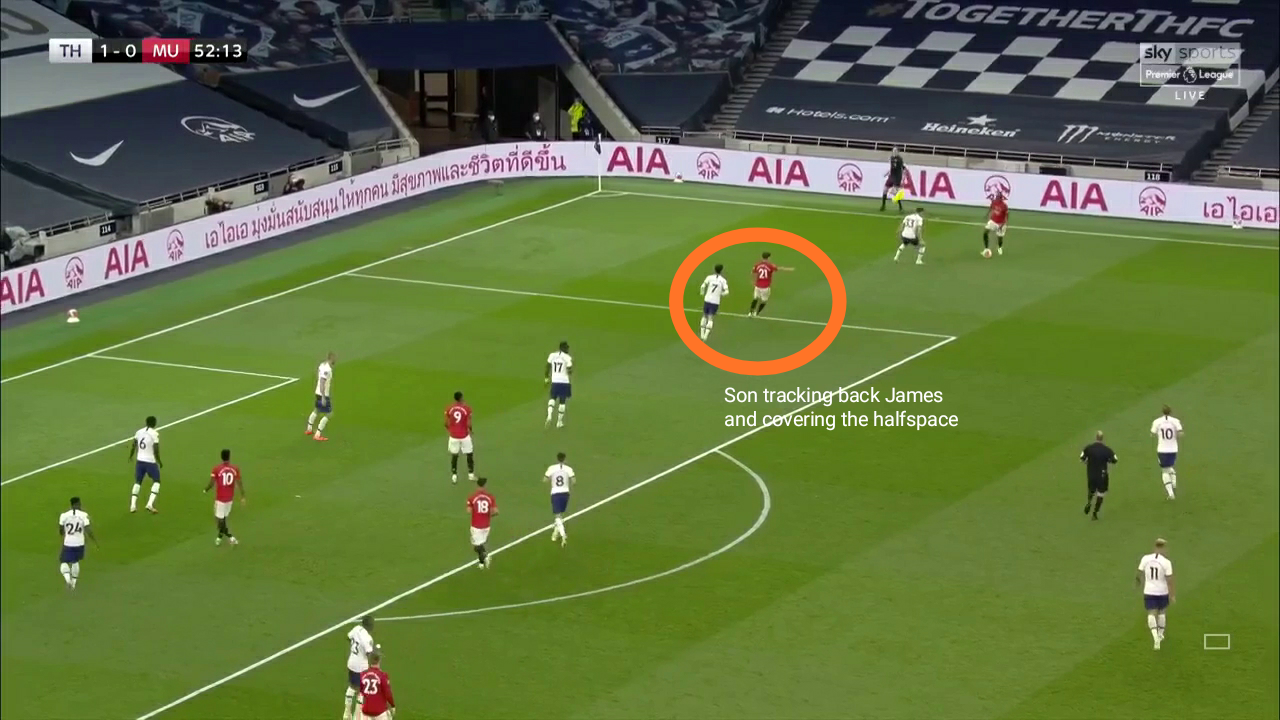 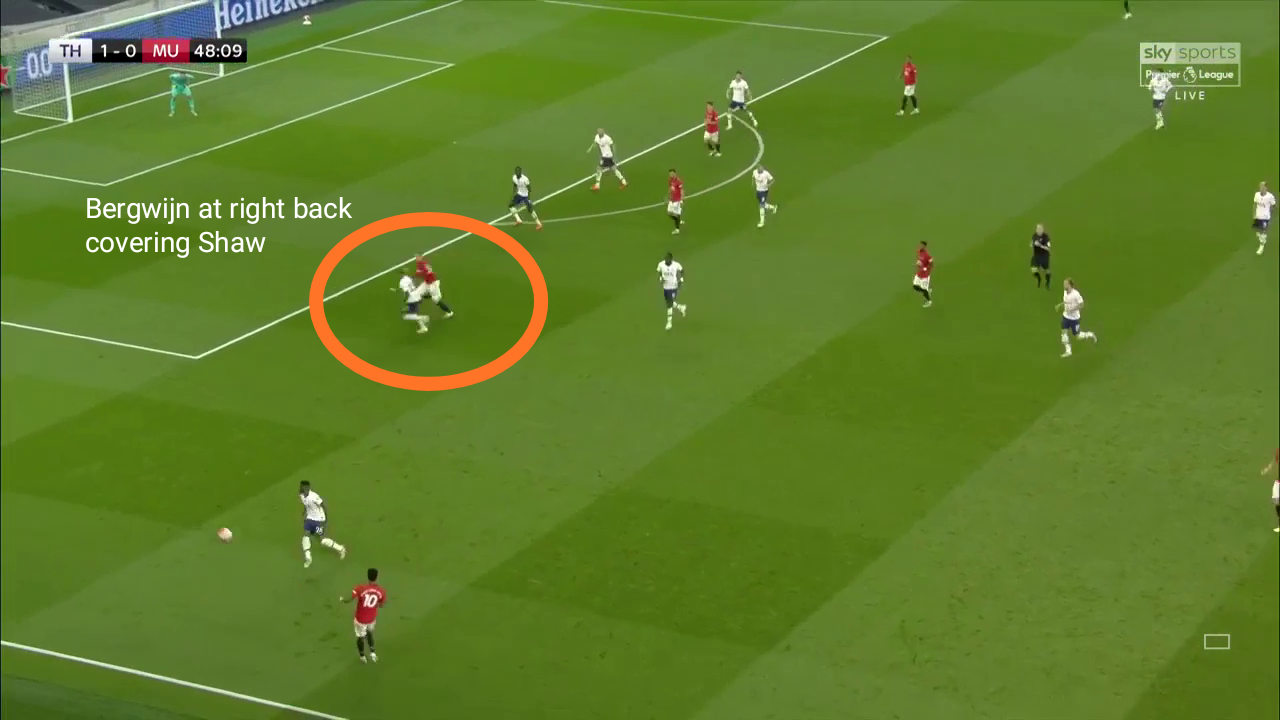 This came at a cost to Spurs’s attacking plans, as they struggled to create any danger whatsoever on the counter, which in turn mounted even more pressure on them to defend against United’s wave of attacks and keep a clean sheet. 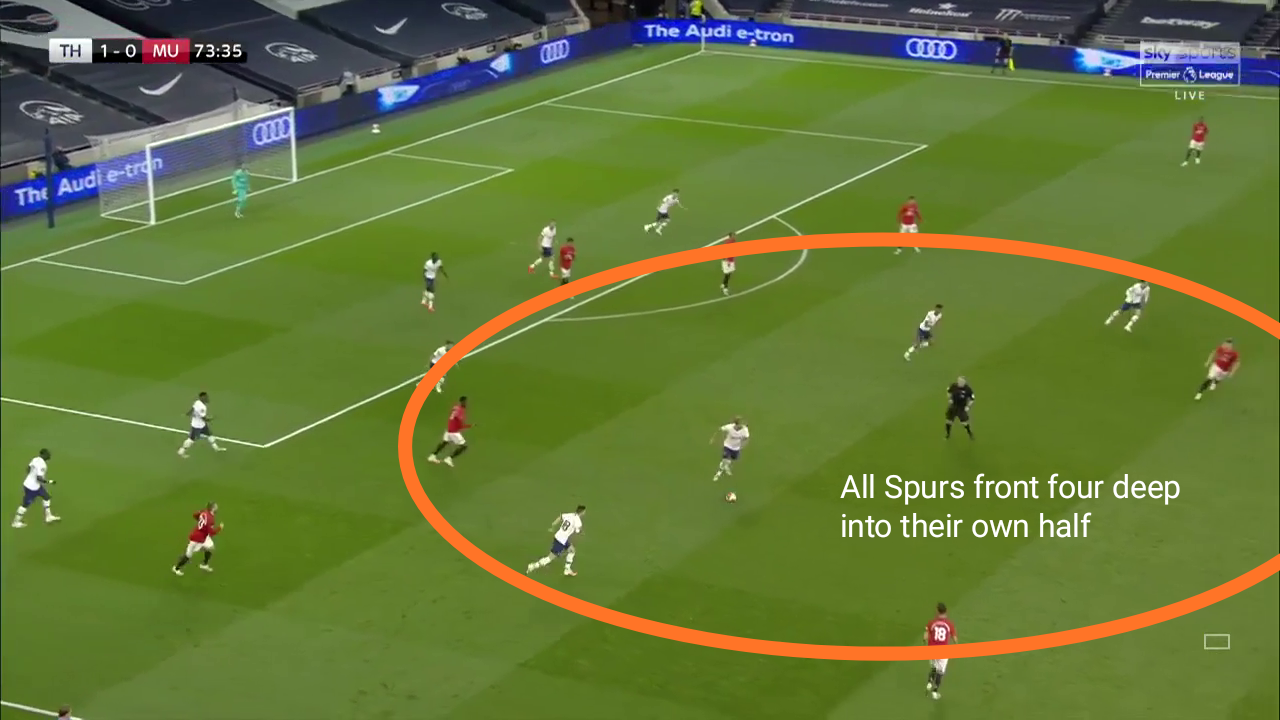 Pogba came on for Fred in the 63rd minute and added more creativity and flair to United’s attack. Further, the introduction of Nemanja Matić for Victor Lindelöf meant that Pogba could move further forward and influence the play.

Seconds after Matić was introduced, Pogba advanced further forward and danced past Eric Dier into the box, before being hacked down and winning a penalty for United. Fernandes converted the penalty, and United picked up a hard-fought point in Tottenham to further their pursuit of top four.