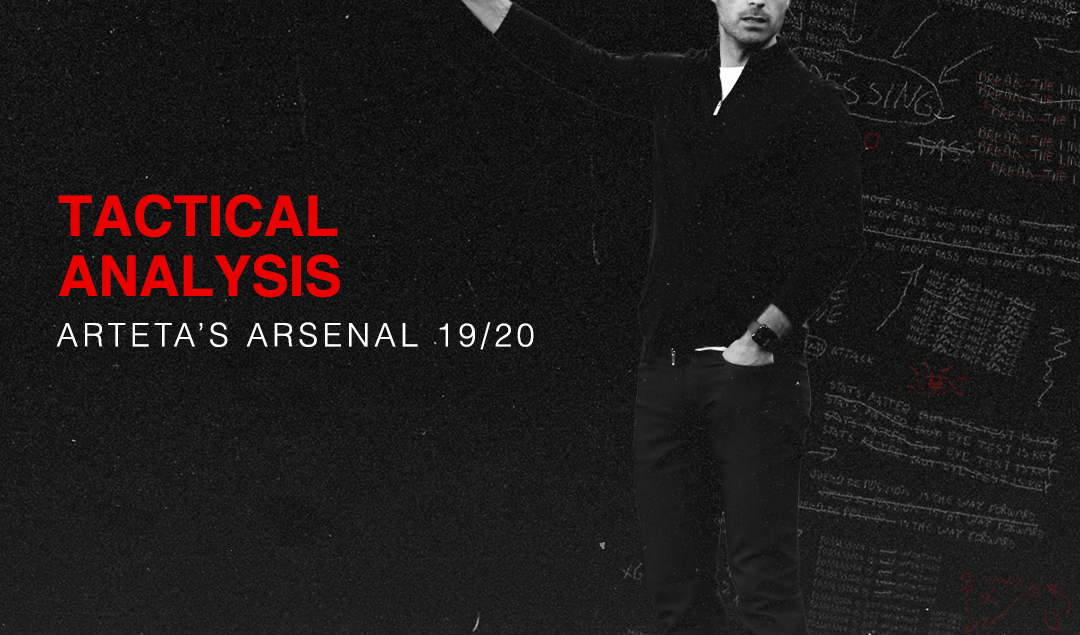 Having departed Pep Guardiola’s coaching staff at Manchester City, Mikel Arteta arrived at Arsenal in December 2019 with new ideas on the pitch and behind the scenes. From his first game in charge, his playing ideologies and tactical framework were on full show. Despite being dealt with a relatively poorly built squad, he began putting the pieces together and building confidence within the roster.

Following a disappointing exit of the Europa League to Olympiacos, the coronavirus-mandated break began. Arteta saw it as an opportunity to work on the team individually and collectively, and they would go on to end the season by lifting the FA Cup at Wembley Stadium.

This tactical report will be formatted as an opposition analysis would be, as we break apart Arteta’s game model, looking at the objective and common patterns of Mikel Arteta’s tactics throughout the thirds and phases of play while also using individuals metrics to target key individual performers. 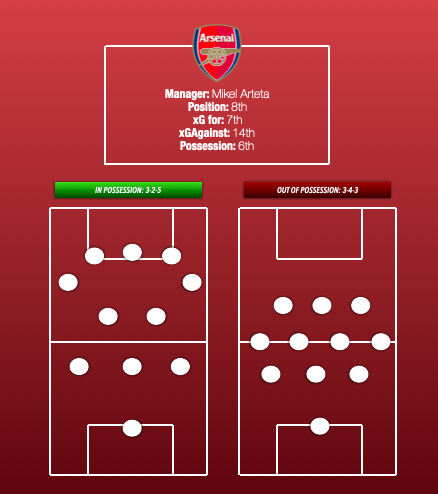 Who creates and scores goals for Arsenal? 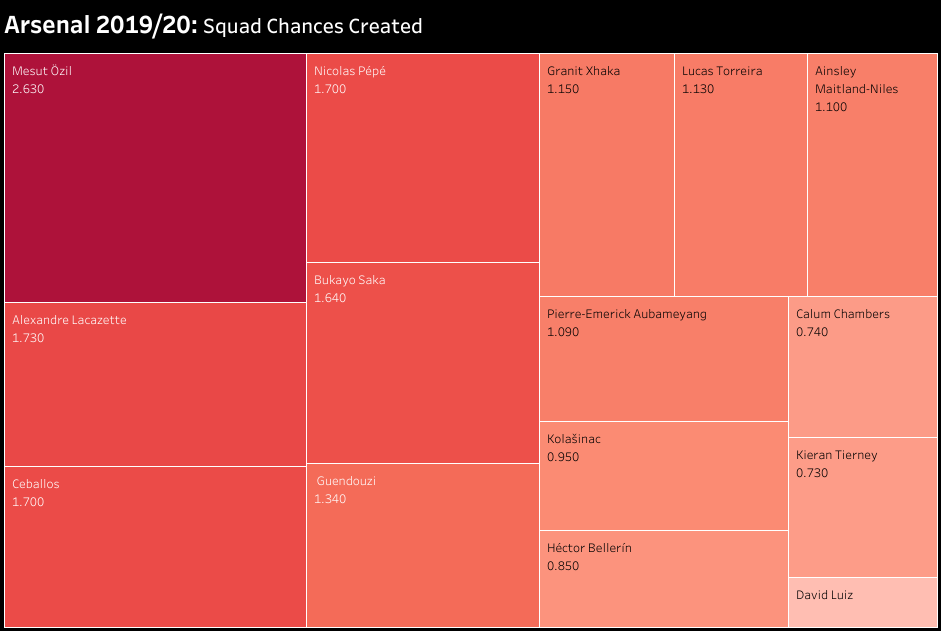 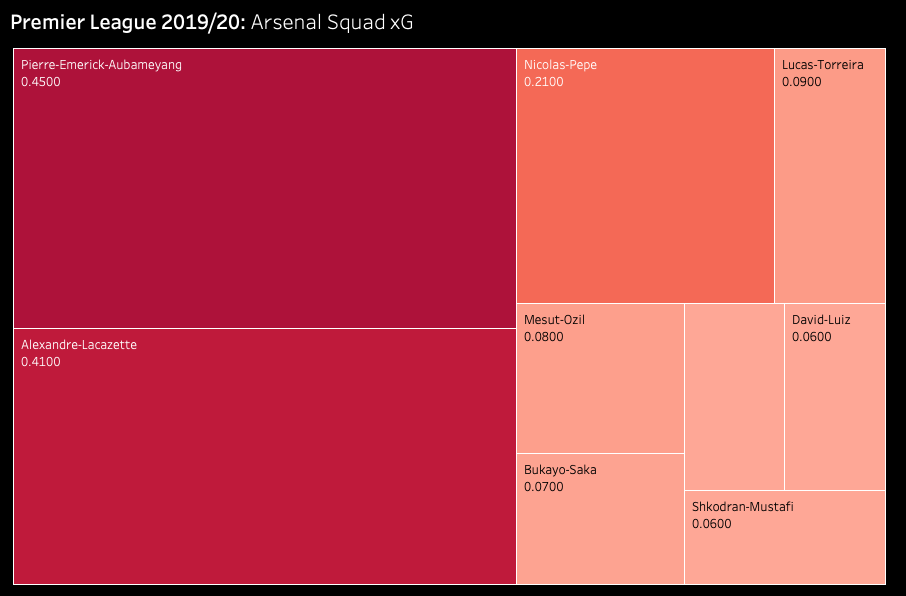 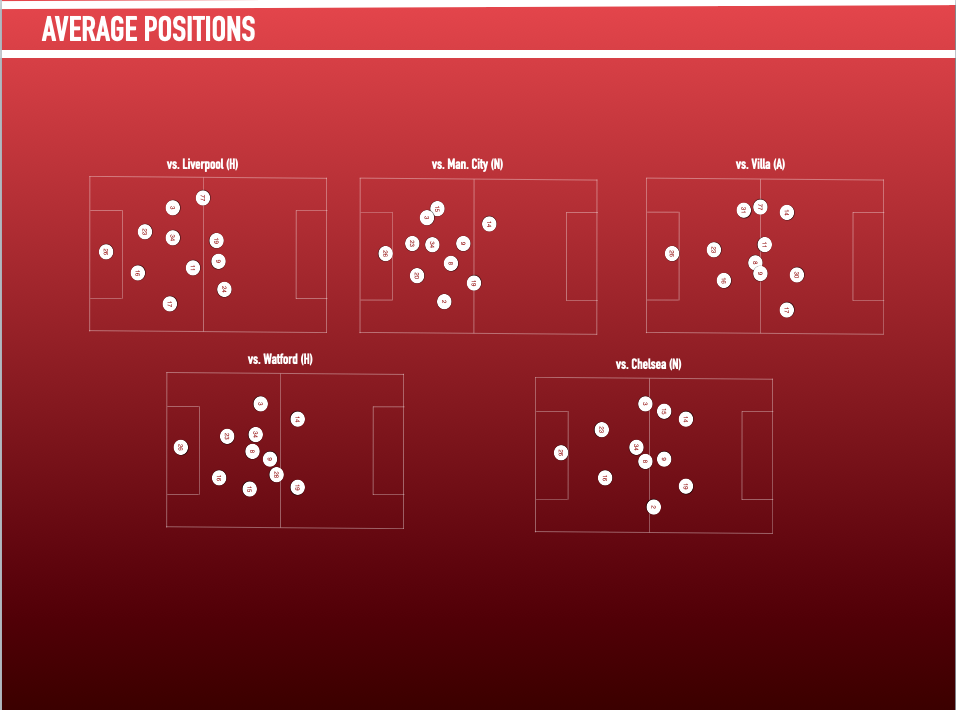 Objective(s): Attract pressure into own defensive third to open space in advanced positions through deep positioning. Create a central or wide overload utilizing an inverted wingback. Bypass the entire defensive block through the passing range of the goalkeeper.

General: Within their defensive third, Arsenal play out from the back. Their 1-3-4-3 formation shapes into an asymmetric 3-5-3 in this phase. The left sided center back shifts out wide and positions himself as a fullback would, on the touchline providing width.The goalkeeper steps out to maintain three players within the defensive line. This frees up the left wingback to join the second line and act as an extra midfielder. 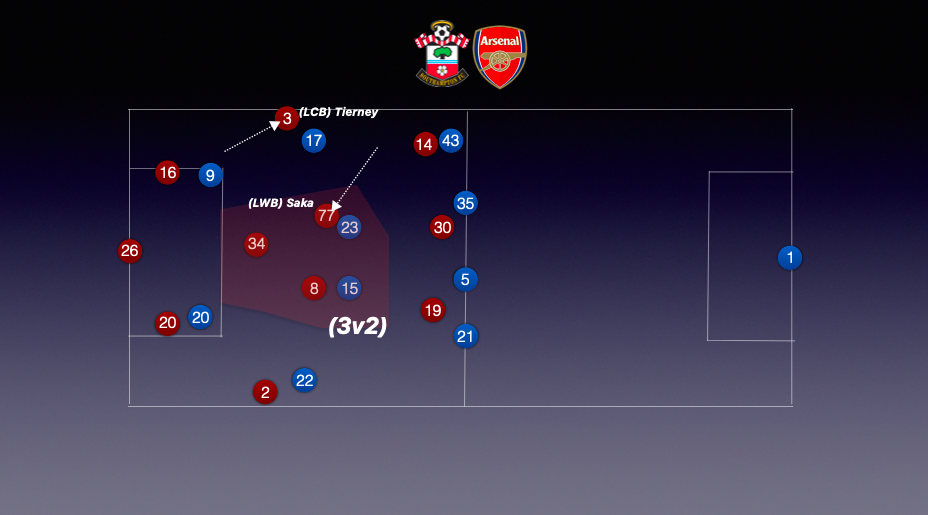 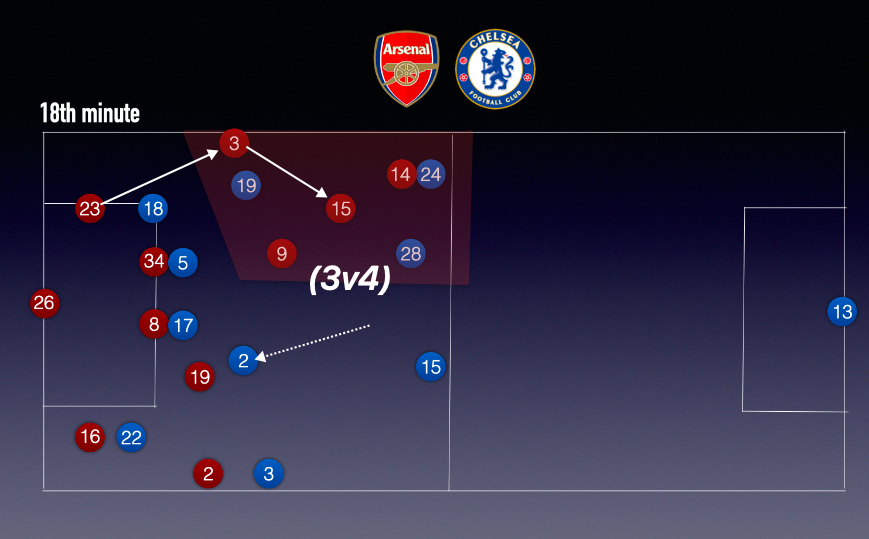 Objective(s): Overload one flank to switch to the underloaded. Utilize the center forward to create a central overload. Create passing angles through dynamic movements between the lines.

General: Within the middle third, Arsenal’s shape turns into a 3-2-5. Forwards move inside positioned very narrowly while the wing backs are allowed to come forward to provide width. Without an attacking midfielder in the team the center forward is tasked with linking flank to flank and midfield to attack.

Figure 2: Lacazette (CF) creates passing angle into center from overloaded left flank, turns and switches play quickly to underloaded side where Arsenal have 2v1 against City’s left back.

Figure 3: Ball circulated to Mustafi, on the opposite side Aubameyang (LW) moves inside dragging the right back with him opening space for Kieran Tierney to push into. Mustafi makes a long diagonal pass to Tierney. Tierney and Aubameyang have a 2v1 advantage against the Norwich fullback.

Figure 4: Countermovements between Reiss Nelson and Bellerín. Nelson (RW) drops deep within the right half space, Bellerín pushes forward and makes a run in-behind the left back.

Objective(s): Create chances through crosses from the flanks targeting the runs of the wide forwards. Create net through positioning to retain possession through counterpressing.

General:  Since Arteta has taken over, Arsenal have scored 45 goals. In the attacking third Arsenal play at a quick tempo. They primarily find space within the wide areas which can sometimes leave a large reliance on chance creation to the wingbacks.

Against teams playing with a back four, a 3-2-5 is implemented. However, if the opposition decides on defending with five players in the last line, Tierney will overlap on the left with the left wingback moving into the left half space making a 2-2-6 formation. 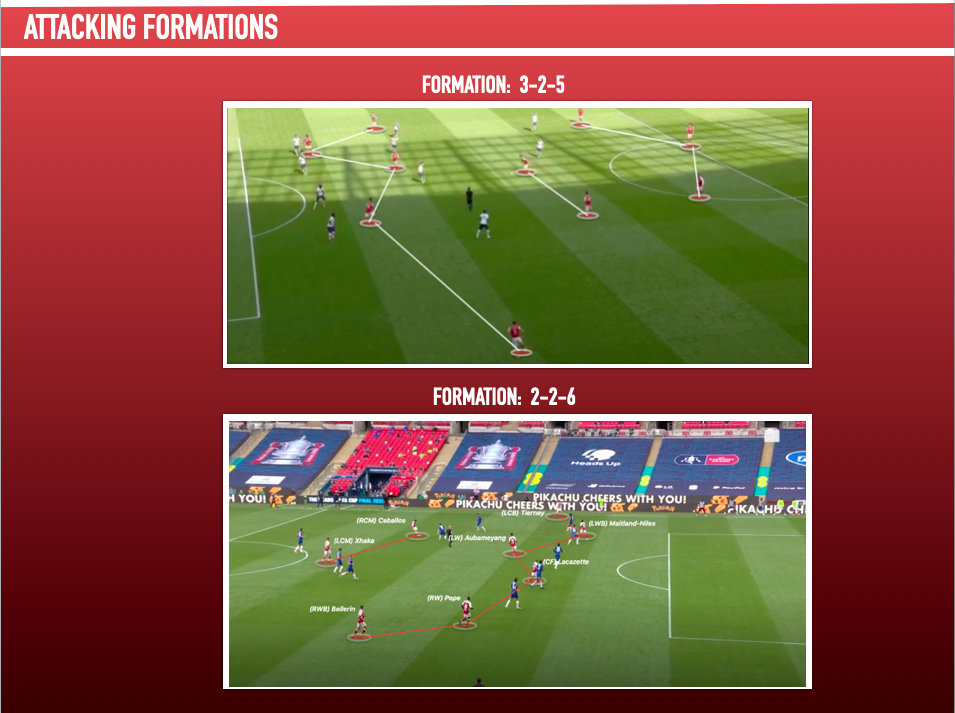 Figure 2: Forwards positioned narrow, each in their vertical zone. While the wing backs are in line with each other providing the width. Ceballos (RCM) sees Tierney in space on the left, receiving with time and space to cross to the near post where Aubameyang is making a run.

Figure 3: Five players in the offensive line creates 5v4 overload against the opposition defensive line. Right back left in a 2v1 scenario with Aubameyang and Bukayo Saka.

Figure 4: In transition, Pépé (RW) from the right looks for Aubameyang making a blind side run against Kyle Walker (RB) toward the back post. Xhaka (LCM) makes an underlapping run offering a different option.

Figure 5: With so many players naturally positioned in advanced positions, it creates an effective counter press as they outnumber players in the immediate area. As the ball is given away, they can quickly close down the player receiving.

Press out of Possession

Objective(s): Create a turnover before the opposition can progress through their defensive third.

General: Out of possession Arsenal utilize two shapes throughout the thirds. Within the attacking and middle third they utilize a 1-3-4-3 and inside their own third an asymmetric 1-5-2-3. The defending starts with the forwards as the front three are tasked with going man for man with opposition defensive lines.

This means the opposition are forced to at minimum have three players in their defensive line during this phase otherwise having to play through a numerical disadvantage of a 2v3. Even when the numbers are equal their cover shadows will cover central passing lanes.

If a goalkeeper plays a long pass to a wingback/fullback, Arsenal’s wingbacks have time to engage them high up the pitch. If an attacking midfielder drops deep into the left or right half space that side of the pitch can get compressed.

Figure 1: 3v3 against Wolves’ center backs, Willy Boly’s only passing option is the goalkeeper Rui Patrício. Aubameyang can carry his momentum sprinting forward toward Patrício to force him into making a long pass. 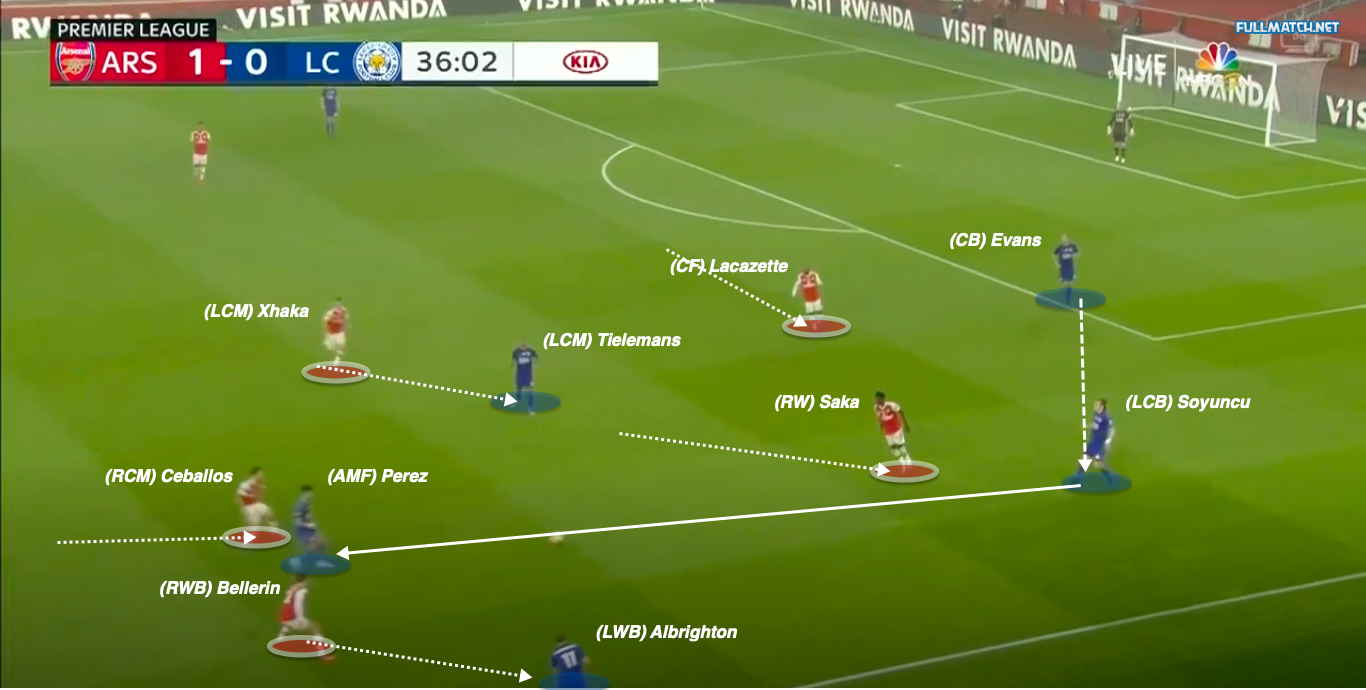 Figure 2: Leicester’s attacking midfielder Ayoze Pérez drops deep in right half space to create a new passing angle for Çağlar Söyüncü, however Arsenal can quickly compress space in the zone he is in before he even receives the pass setting them up to regain possession.

Figure 3: Adama Traoré receives a pass from Rúben Neves between the lines and due to the spacing between the second and third line he has the time and space to attack with the ball toward the backpedalling defenders.

Arsenal created the 16th least amount of shots from set pieces in the league. It seems like an area however that Arteta has been working on as we can see from some of the commonly found routines below. Additionally they created three shooting opportunities from set pieces in each of their last two Premier League games which is more than their usual zero-one. 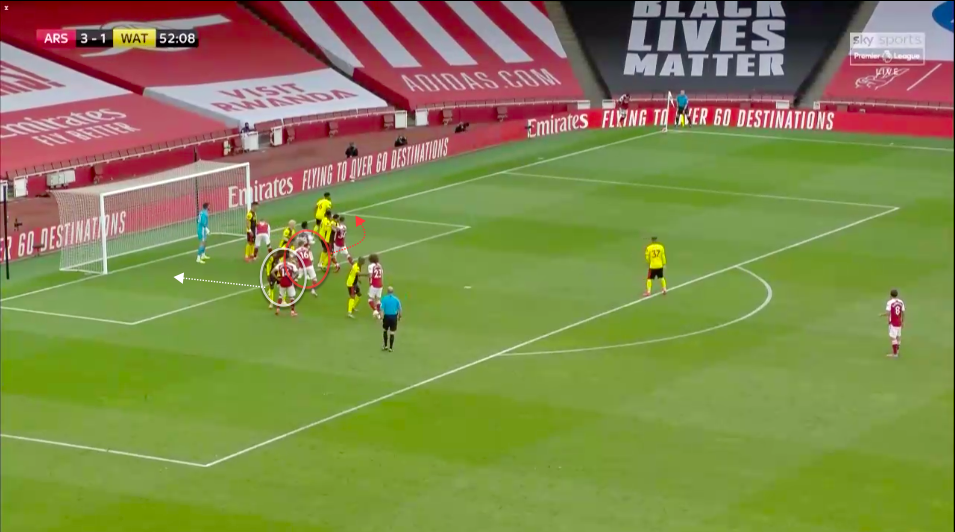 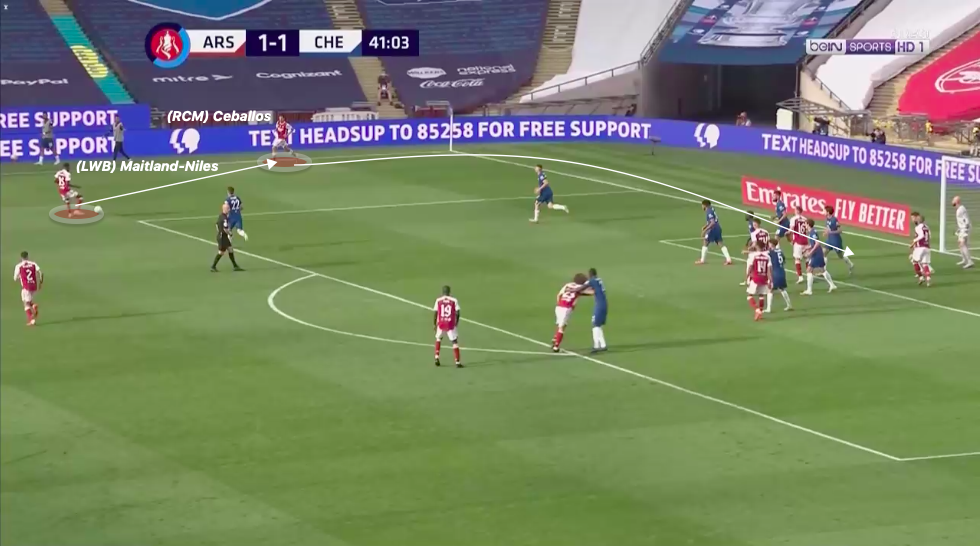 Figure 2: Corner taker plays 1-2 with nearest player, who plays it back to the corner taker for a cross to the back post.

Significant Strengths : Arsenal are at their best when the ball is in their own half. The use of Maitland-Niles as an inverted wingback when playing out the back to create a central or wide overload has been a problem that some of the world’s best coaches in Pep Guardiola and Jürgen Klopp have not been able to account for. With dragging the opposition so far forward the likes of Aubameyang has flourished in making runs against unsettled defenses and isolated center backs who cannot keep up with his pace.