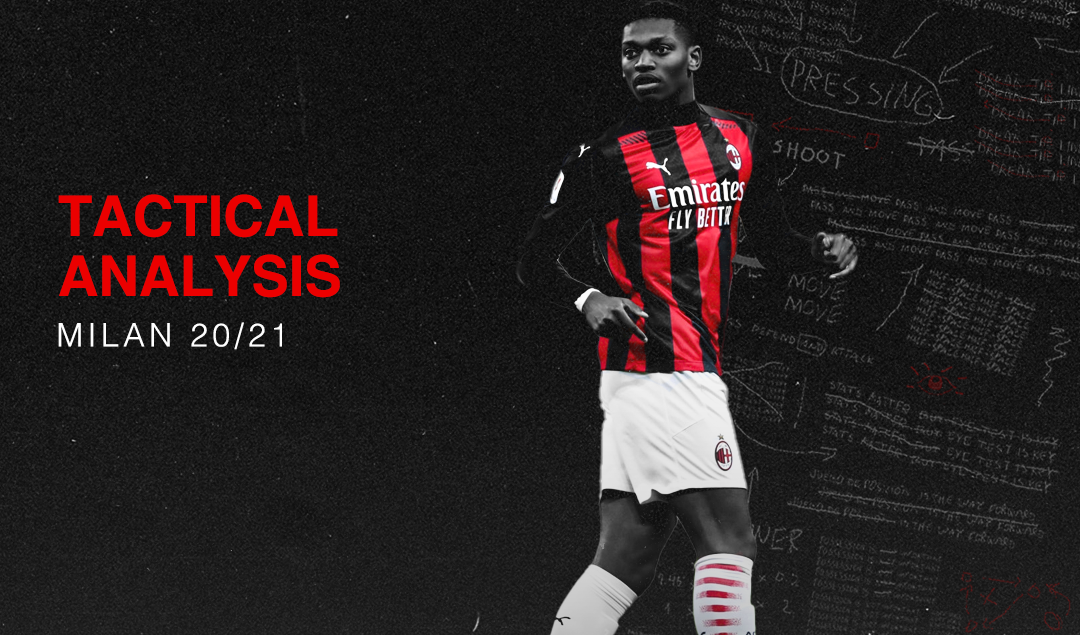 After a tumultuous decade for AC Milan, which saw them suffer their longest trophy drought since the 1940’s and go through 11 different managers, things are looking up for the Rossoneri. Stefano Pioli’s side currently sit atop the Serie A table with 43 points — just two points above Inter — whilst they are set to face Crvena zvezda in the UEFA Europa League Round of 32.

With Juventus, Roma, Atalanta and Napoli within touching distance of first place, Milan will need to bounce back from their Coppa Italia elimination against Inter and maintain their domestic performances if they are to win their 19th Scudetto. But just how have Milan gone from a disappointing sixth-place finish under Pioli to competing for the league title?

After replacing Marco Giampaolo on October 9, 2019, Pioli originally went with a 4-3-3, but he switched to his favored 4-2-3-1 formation following the arrival of Zlatan Ibrahimović in January. Gianluigi Donnarumma has been one of the first names on the team sheet between the sticks, whilst Simon Kjær and Alessio Romagnoli have formed an impressive partnership in the heart of defense.

Despite originally falling down Pioli’s pecking order, Davide Calabria has achieved a new lease on life at the right back position, whilst Theo Hernández has become a revelation at the left back position since joining from Real Madrid in the summer of 2019. In the double pivot, Ismaël Bennacer has formed a rock-solid pairing with Franck Kessié in the middle of the pitch, keeping Sandro Tonali, Rade Krunić and Soualiho Meïté on the bench. 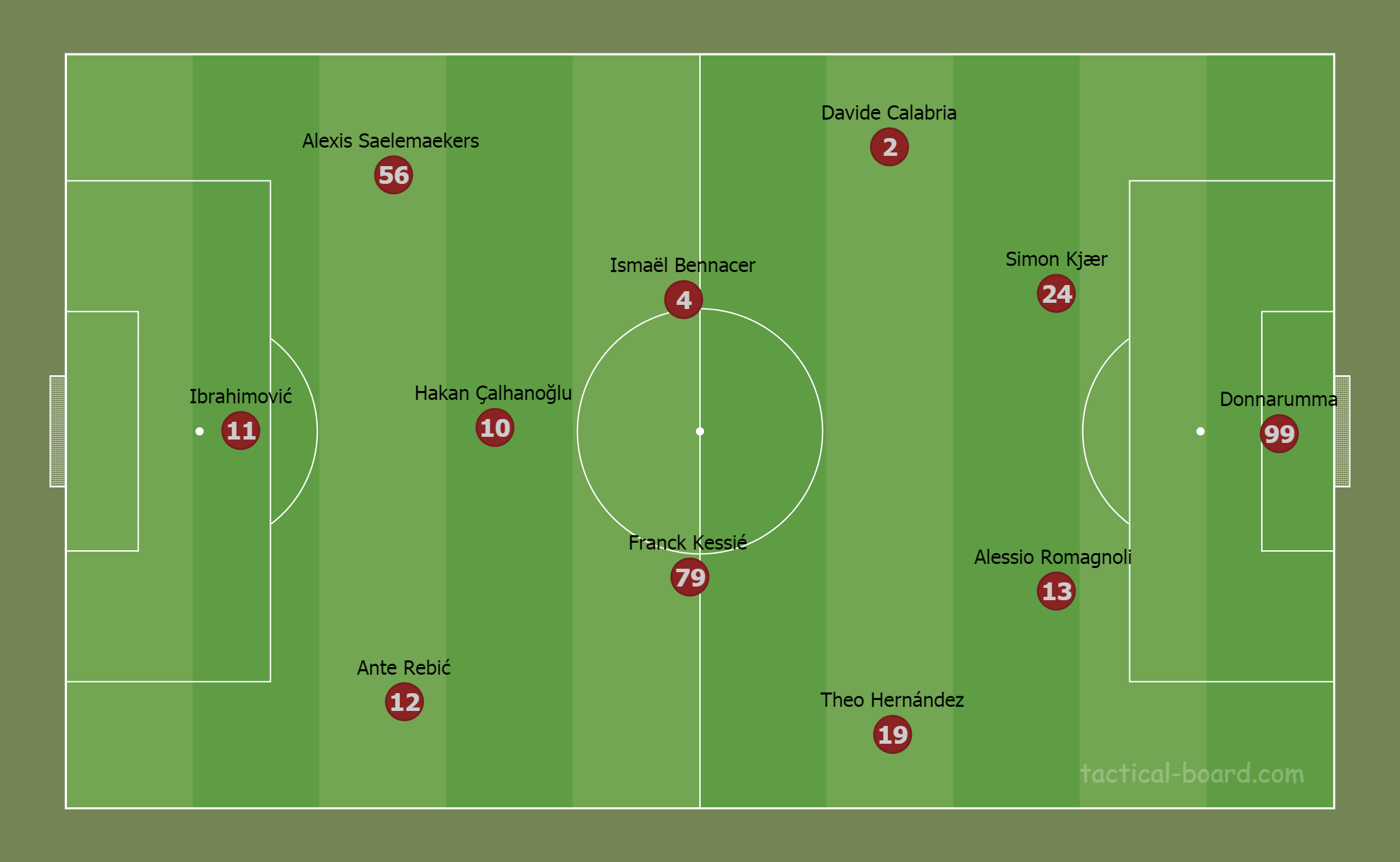 Ante Rebić and Alexis Saelemaekers have been Pioli’s first-choice pairing on the wings, although Jens Petter Hauge and Samuel Castillejo have been rotated into the side from time to time. After previously being used on the wings and in a deeper midfield position, Hakan Çalhanoğlu has played the best football of his career as the ‘trequartista’ of the side, playing off the shoulder of Zlatan in the attack.

Since Pioli’s appointment, Milan have been renowned for their aggressive pressing which closes down spaces for opponents, as demonstrated by their low PPDA of 8.83 against Juventus on January 6. Passes Allowed Per Defensive Action (PPDA) measures the amount of passes made by the attacking team divided by the amount of defensive actions; in essence, the lower the PPDA, the more aggressive the pressing from the defending team.

However, despite the intensity of the press, Milan ended up losing 1-3 to Juventus at the San Siro, with a brace from Federico Chiesa and a goal from super-sub Weston McKennie proving fatal for the Rossoneri’s chances of emerging with a point against La Vecchia Signora. Juventus manager Andrea Pirlo clearly spotted some potential flaws in Milan’s set-up that he sought to exploit.

For example, there were two spaces between the lines of Milan’s players. The first space (#1) is indicated by the yellow circle, which allowed Paulo Dybala to move freely into the central channels and receive the pass. The second space (#2) is indicated by the red circle, which appeared in the left half-space. With Hernández drawn out to the touchline to block Chiesa’s potential pass, there is an acre of space in between him and Romagnoli.

With Franck Kessié and Jens Petter Hauge monitoring Adrien Rabiot, Chiesa decides to cut inside on his left and play a quick one-two with Dybala. The Argentine held off Romagnoli before playing an audacious back-heel flick to the onrushing Chiesa, who charged into the open space between Hernández and Kjær and calmly slotted the ball into the bottom left corner.

Despite their table-topping form this season, there are several recurring issues in their defensive structure that will need to be rectified if the Rossoneri are to go the distance and win the title. First and foremost, opposition teams are learning to exploit the gaps between the center backs, where one forward drags the Milan defender out of position and creates space that can be exploited by his attacking partner.

We can see an example of this in Milan’s 3-0 victory over Spezia on October 4. After receiving the ball on the right flank, Daniele Verde cuts inside and plays a through ball into the box. Andrey Galabinov drags Kjær out of position and into the left half-space with his movement, creating a window of space within the box. However, Milan loanee Tommaso Pobega is too slow to react and fails to make contact, eventually fouling Calabria in the box.

One of Milan’s biggest defensive issues is poor coordination within the box, with opposing attackers being able to infiltrate the final third without enduring too much pressure. This stems mainly from a lack of chemistry between the center backs; although Kjær and Romagnoli have enjoyed a harmonious partnership since the Danish veteran’s arrival from Atalanta in January 2020, they still haven’t quite developed the perfect understanding of each other’s characteristics due to injuries and other factors, with Matteo Gabbia and Pierre Kalulu often being rotated into the side.

This is exemplified in Milan’s 3-1 victory at the Stadio San Paolo on November 26. After Zlatan put Milan up two goals to the good with a brace, Dries Mertens halved the margin in the 63rd minute. Kessié coughed up possession outside his own area, with Piotr Zieliński capitalizing on the loose ball and teeing up Mário Rui at the edge of the box. Rui’s cross found its way into the path of Mertens, who only had to beat Donnarumma in order to get on the score sheet.

Milan mainly attack through their right flank, with Bennacer often being the more creative, dynamic ball progressor of the double pivot, while Kessié is the more defensive player tasked with covering the space in behind him. The Algerian typically starts the offensive play from deep on the right side of the pitch, and this right-sided overload in the build-up leaves gaps on the left side of the pitch, space which can then be exploited by the restless, buccaneering left back Hernández.

Bennacer consistently ranks first amongst Milan players when it comes to passes distributed, as seen in Milan’s 2-0 victory over Bologna on September 21. Zlatan won the headlines with his brace, but it was Bennacer who ran the show in the center of the pitch, controlling the flow of possession and holding his own against Nicolás Domínguez, Jerdy Schouten and Roberto Soriano in midfield. 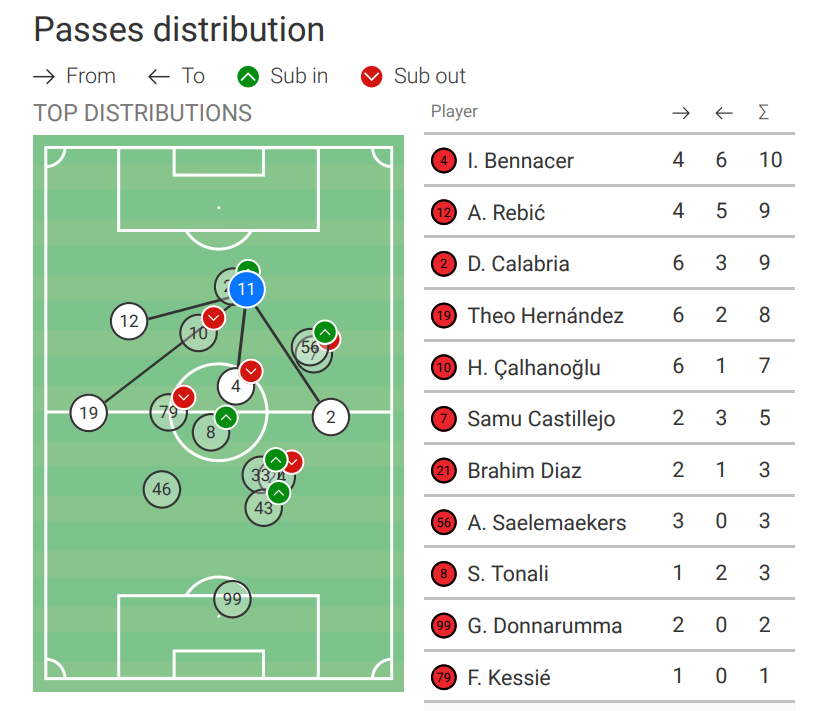 Pioli’s side are consistently reliant on Bennacer for progressive passing, maintaining the flow of possession, and breaking the lines. Bennacer drops deep and sprays a through ball towards the right flank, and the pass manipulates the Spezia defenders into focusing on blocking the pass from the right flank, thereby freeing up space for Rafael Leão to exploit on the left.

Milan’s transformation from a perennial Europa League side to genuine title challengers cannot be explained without the addition of Zlatan, who at 39 years of age, has provided 14 goals and 2 assists in 15 appearances this season. His role is not just limited to getting into goalscoring positions inside the box, but also aiding in the build-up and providing a unique weapon in attacking transitions.

Three years after suffering an anterior cruciate ligament injury during his time at Manchester United, Zlatan still possesses the same incisive movement that saw him menace Serie A defenders for Juventus, Inter, and Milan. We can an example of this from Milan’s 3-1 victory over Napoli, which saw the Swedish forward broke the deadlock in the 20th minute.

Receiving the ball under pressure, Bennacer evaded Lorenzo Insigne and threaded the needle to find Rebić, who gently played a lay-off pass to Hernández, who took a touch and played a looping cross into the box. Having originally stuck closer to Giovanni Di Lorenzo, Zlatan quickly changed direction and beat Kalidou Koulibaly in the air, diverting his header past Alex Meret and into the back of the net.

It has been a sensational first half of the season for Milan, with the Rossoneri deservedly sitting atop the Serie A table as they prepare to face Bologna at the Stadio Renato Dall’Ara on Saturday. To add to this, Milan directors Paolo Maldini, Ivan Gazidis and Frederic Massara have worked diligently to expand the squad’s depth this window, bringing in Soualiho Meïté and Fikayo Tomori on loan deals from Torino and Chelsea, respectively, whilst signing Mario Mandžukić on a free transfer. Ten years after firing them to a Scudetto under Massimiliano Allegri, Zlatan Ibrahimović could be set to return Milan to the promised land and spearhead them to domestic glory in his first full season back in Lombardy.