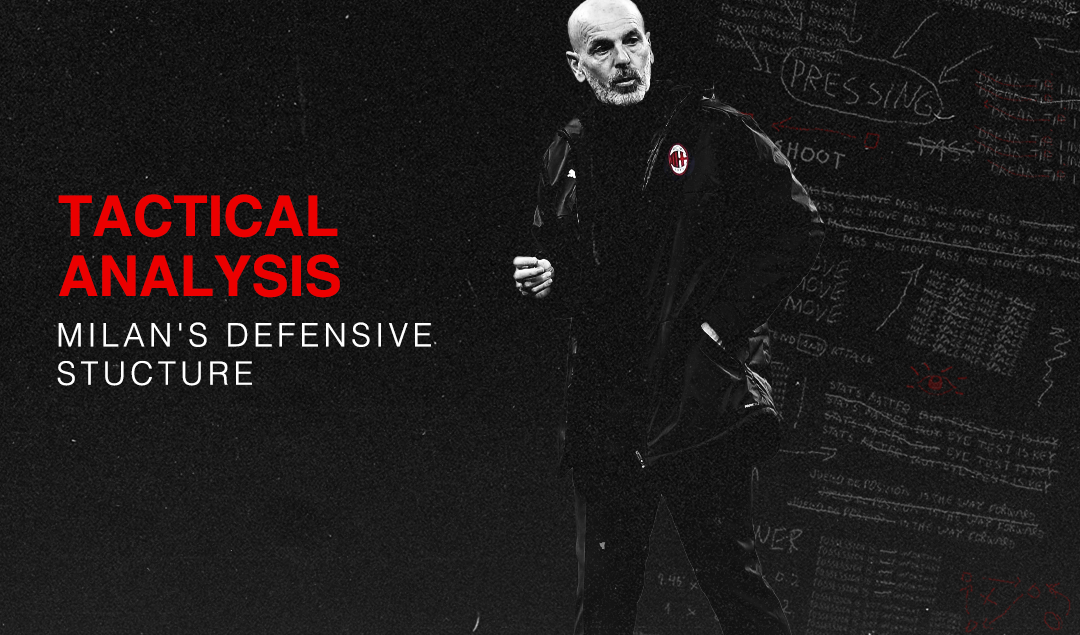 Milan have enjoyed a rip-roaring start to the season under manager Stefano Pioli, currently atop the Serie A table after 16 matchdays and set to face Red Star Belgrade in the UEFA Europa League Round of 32 after topping their group of Lille, Sparta Prague, and Celtic. Whilst Zlatan Ibrahimović has received most of the attention for his excellent performances at 39 years of age, but there are other crucial aspects of how Pioli has organised this side, including the methods by which they attempt to prevent the opponent from building defensively.

Milan’s double pivot, typically Ismaël Bennacer and Franck Kessié track the opponent’s deep midfielders in a man-oriented fashion to make reception difficult. The attacking midfielder, usually Hakan Çalhanoğlu alongside Zlatan Ibrahimović allows the opposing centre backs to receive possession. This seeks to direct the opponent to the touchline as the player in the first line closes their respective centre back lightly once they receive.

The winger sits off slightly to invite possession to the full back. However, when the full back receives possession, the winger starts the press with greater intensity. Although the aim is primarily to cut off passing options to the player in the possession as the forward player cuts the regressive passing lane, the midfielder tracks his man meaning the lateral lane will likely result in a turnover while the winger closes down the forward lane while applying pressure.

The primary aim of Milan’s higher pressure is to make building through the centre difficult and provoke a wide or long pass as quickly as possible, as the tight central man-marking indicates a desire to not allow central players on the ball.

The solution to this scheme seems simple, have an attacking midfielder or deeper dropping forward enter the space vacated by the double pivots tracking. However, Pioli has a plan up his sleeve. Covering crucial spaces in the vacated centre becomes the responsibility of Simon Kjær and Alessio Romagnoli who are required to be aggressive in their duels. The emphasis on the ball-side allows the far side full back to tuck in to cover defensively.

Overall, Milan are happy for the opponent’s goalkeeper and two centre backs to have possession as they are not viewed as dangerous actors, particularly when deep. The role of forwards varies depending on the opponent’s build-up structure; however, pressure very rarely is more than light upon the centre backs.

Against double pivots, they typically position themselves in line to cut the passing lane while pressing. Against single pivots typically one presses the centre back in possession lightly while the other covers the defensive midfielder which makes the far side centre back the free man for the opposing team, encouraging circulation.

This creates a narrow 4-4-2 structure when the ball is central which is useful in attaining the numerical superiority in midfield due to the deep-lying nature of the forwards creating pressing traps when the opponent tries to progress centrally.

Potential weaknesses include centre back progression should the forwards sit off too much. This becomes a problem when the midfield players from the opponent are spaced at a sufficient distance so that the two lines are not compact. This generates space to run into creating instances of numerical superiority when the centre back enters the zone of the man-oriented midfielder, discombobulating the structure.

Deep commitment such as that seen by Napoli allows the man-orientation to produce compactness which limits options. Stretching the play similarly to Sassuolo in this example achieves the best results as it grants the centre back receiving possession time and space in possession. The two central midfielders sitting high adds to this, which allows Marlon to progress into space unperturbed.

So, their build-up prevention structure, like all man-oriented defending, is susceptible to positional manipulation because the opponent is the reference point behind positioning. This means their pressing central compactness varies depending on the opposition.

Another weakness of the system was demonstrated by their opponents Sassuolo, who opted for a similar defensive set-up.

Davide Calabria comes deep which creates a passing lane for Pierre Kalulu drawing Filip Đuričić as he is the obvious passing option. This reduces the vertical compactness between winger and wingback, therefore increasing the spaces in between the lines for Milan players to exploit.

Kalulu then goes direct which forces Gian Marco Ferrari into a duel with Alexis Saelemaekers, who can consolidate as he faces no reverse pressure from his opposing winger due to the lack of compactness generated by the deep full back.

The defence is then befuddled by a positional rotation between Brahim Díaz and Rafael Leão. They are then caught in the defensive of retreat due to the introduction of new space by Saelemaekers pass. Their lack of central compactness due to the deep tracking of the double pivot is then exposed as their defensive players are constantly forced deeper by Leão’s penetrative movement. This allows Çalhanoğlu the time to finish at the edge of the box.

The point which is attempted to be illustrated is that this situation could easily be reversed onto Milan if circumstances permitted. They are however more proficient at winning their defensive duels and structurally covering through the narrow wingbacks. Additionally, having a player like Leão in dangerous 1v1 situations makes them more effective at capitalising upon man-orientation to a greater extent.

Pioli will, however, be cognisant of this and will accept it as a necessary risk in preventing the opponent’s short distribution, as football is a game of trade-offs, not perfection. His faith in his defenders is evidently corroborated as the example to highlight this conceptual weakness was actually in Milan’s favour.

Against back threes, the structure alters because the wingers cannot sit in line with the wingbacks while remaining effective in limiting short build-up. Furthermore, as the opposing centre backs have greater freedom to roam because of the additional cover provided, more negative passing options which are less likely to be covered are present and the more advantageous starting position in the half-spaces allows better formations of triangles with the wingback/central midfielders.

These aspects considered, the wider centre backs more dangerous actors than their counterparts in a back four. This means Milan need to commit more numerically in accordance with their opponent, as to apply pressure to centre backs, making them more susceptible to transitions because of the increased exposed space.

However, equally, the deep commitment of the opponent also means there are fewer players in advanced areas to take advantage of the space. Although the impact of the increased space has a more profound effect because Milan are more vertically stretched in addition to having fewer numbers.

Consequently, the wingers come in narrow and become oriented around their respective centre back while the attacking midfielder drops deeper than typical and covers the opponent’s deep midfielder. Meaning against back threes the shape alters from a 4-4-2 to a 4-2-1-3. The full backs importance increases in relation to the press as they are now responsible for the management of wingbacks, a position which can vary significantly in starting build-up position.

They will often be isolated 1v1 if the opponent breaks the pressing lines, and will face a player with forward momentum either from a dribble or a run which can make the duel even more challenging. This is particularly pertinent against 5-3-2’s like Lazio’s, as due to the higher pressure they do not have a numerical parity as the goalkeeper is an active figure that deep, meaning they initially face a 5-4 situation which is the first step of undermines the man-oriented system.

This is as the opponent will always have a free man when the goalkeeper is involved, which destabilises the system as reception is easy for the player in possession and subsequent compensations need to be made which make defending more chaotic. This is less of a problem in a zonal system where limiting the effective space can allow the pressing teams to achieve numerical superiorities or equalities within certain accessible areas.

Most importantly, their system of man-oriented compensations is undermined as the full backs are no longer capable of covering when the centre backs aggressively track their opposing player. This is because of the bequeathed responsibility of tracking the wingbacks.

This means additional space is exposed in behind by a deeper dropping forward as rather than the ball-side full back tucking in to create a back three, they are required to stay high meaning only two far sided defenders remain in the last line.

Playing against back threes which confidently build from the back can therefore weaken their defensive stability as the opponent can more easily create transitional situations through exposing the space as Milan’s full backs are not capable of upholding the covering responsibility.

Once play progresses and the opponents begin to develop in Milan’s half, only the ball-sided midfielder remains man-oriented with the other drifting centrally. This is because dangerous space can be more easily accessed by vertical passes as Milan’s defensive line is more exposed due to the opponent gaining territory.

This necessitates greater compactness to block central through passing lanes, meaning most progressive actions should be funnelled down the flanks. While the motivations on the ball side remain similar to deeper build-up.

This can be considered zonal/man-marking whereby Milan do not dogmatically stick to the opposing player but rather use them as an important reference point behind positioning. This middle of the road policy means that on the ball side Milan have greater access to players who can feasibly receive possession directly which encompasses the man-oriented benefit, whilst having better space protection of the far side should the opponent quickly circulate possession.

When defending in a consolidated manner deep, they revert to a zonal system which is preferable because of the additional control of space it allows the team out of possession. This control of deep space is paramount in comparison to more advanced regions because everything becomes higher stakes defensively in deeper regions which means a lost duel or successful opposition rotation can have a more profound impact comparatively. Whereas the benefits of achieving a turnover are reduced due to the increased distance to the opponent’s goal, and likely additional players in between to cover for transitions.

25% of the goals Milan have conceded have come from corners if the penalty conceded against Lazio via a corner is included. This is a small sample size and is not statistically significant enough to make large conclusions from. However, looking into how they defend corners suggests it will be a persistent problem.

Additionally, they largely man-mark which leaves them susceptible to individual errors as the system is predicated upon players winning their duels and therefore a lost a duel, particularly in the box can have major consequences. Milan can therefore be considered to have a largely reactive corner set-up which grants them little structural control of the box, meaning they are less well prepared for 2nd ball opportunities. These two aspects are areas which can be improved upon, particularly the man on the post.

The fact I am writing about Milan’s defending in such a good season for them carries the implication that I think it is both unique enough to justify covering and good enough to extoll the virtues of while being mindful of weaknesses which appear. They switch orientations between phases of possession, progressively become more zonal which highlights the importance of spatial control in deep areas.

An aspect which can perhaps be less important when attempting to actively recover the ball and prevent the opponent from progressing. Stefano Pioli has the side well regimented, and personnel suitable to the style with many hard-working players amongst the ranks which suggests their recent run of 5 Serie A games without a clean sheet will not continue.