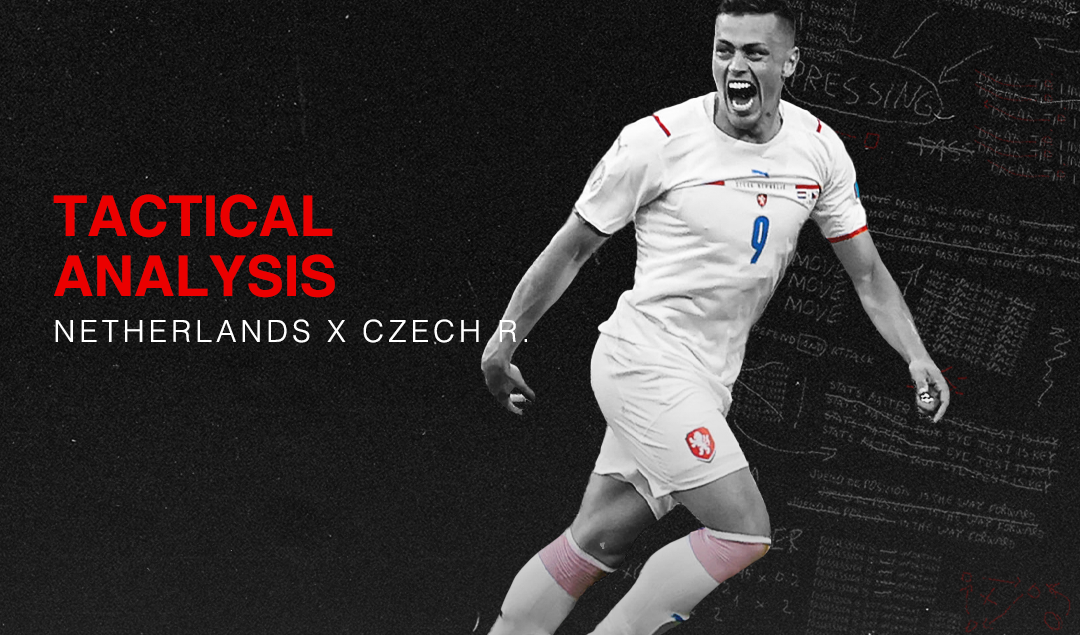 “He knows why he is here and this is the most important thing,” Netherlands head coach Frank de Boer said of Denzel Dumfries ahead of his nation’s last sixteen clash against the Czech Republic. “He will read about it; he will hear about it but I’m not scared he will do strange things because of rumours about his future.”

Although it was speculation regarding Dumfries’ fate that dominated the headlines before kick-off in Budapest, it was a strange play by defensive teammate Matthijs de Ligt that changed the course of the tie. Ten minutes into the second period, the Juventus starlet was dismissed for handling the ball on the edge of the Dutch penalty.

Although the resultant free-kick was struck into the wall, De Ligt’s absence disrupted what had already been a topsy-turvy round of sixteen tie. Just moments before the 21-year-old denied Patrik Schick an obvious goalscoring opportunity, the Netherlands had one of their own – with Donyell Mallen inches from rounding Czech goalkeeper Tomáš Vaclík.

However, two minutes before the hour mark, it was Jaroslav Šilhavý’s side that took the lead. Gifted a free-kick by the Dutch corner flag, Tomáš Kalas leapt highest at the far post, nodding the ball back across the six-yard box for Tomáš Holeš to head beyond Marten Stekelenburg. Roared on by an army of red-clad supporters, the Czech Republic doubled their lead twelve minutes later.

With Holeš racing into the penalty area, Schick was allowed to peel into a yard of space before scoring his third goal of the tournament with a one-touch finish. The 25-year-old Bayer Leverkusen striker’s goal ended the game as a contest, with the Czech Republic’s 2-0 win setting up a quarter-final clash with Denmark.

Man of the Match: Tomáš Holeš

“The goals we gave away, the chances we didn’t take; all that goes through your head,” Netherlands captain Georginio Wijnaldum said of his nation’s defeat at full-time. Despite entering the round of sixteen heavily fancied to reach the latter rounds of the European Championship, the Netherlands crumbled in the face of Slavia Prague defender Tomáš Holeš. 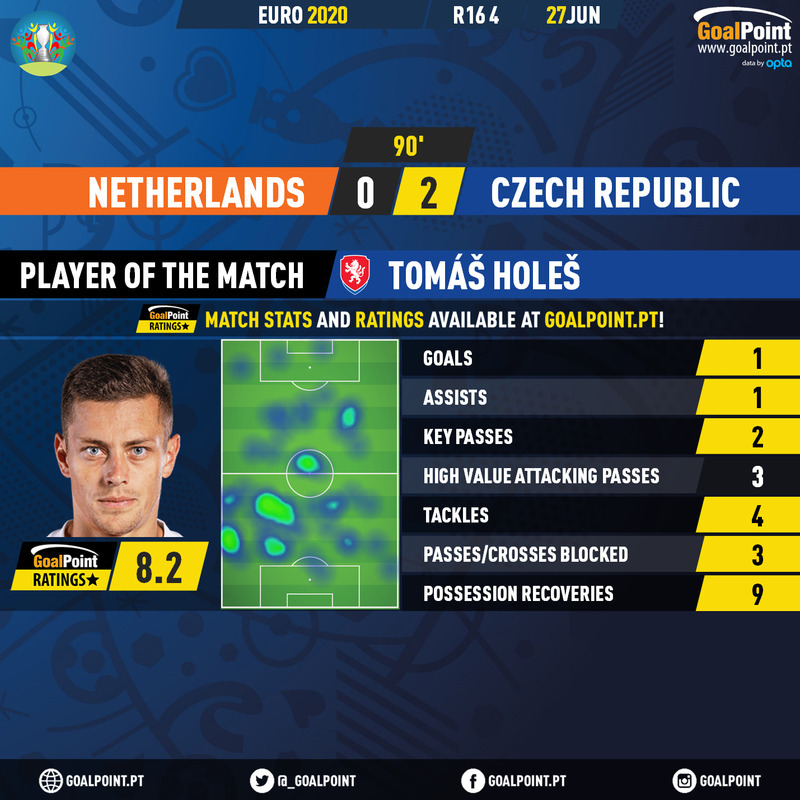 A full-back by trade, Tomáš Holeš was the difference-maker in central midfield as the Czech Republic eliminated the Netherlands from EURO 2020.

Deployed in central midfield alongside Tomáš Souček, Holeš enjoyed an evening to remember against the Dutch. Rated as Player of the Match by GoalPoint, the 28-year-old left the field in Budapest having made vital contributions at both ends of the pitch. With a goal, an assist, and two key passes to his name, Holeš was at the heart of his side’s offensive threat against the Netherlands.

Although the Vysočina native’s attacking contributions will make the headlines, Holeš’ defensive play was instrumental to his nation’s progression at EURO 2020. In what was a box-to-box performance, Holeš made nine ball recoveries before he was replaced by Alex Kral in the 86th-minute.

“He decided the match with his goal and assist for the second,” UEFA Technical Observer Dušan Fitzel said. “He was excellent as a screening midfielder and played it safe in an important position.” With Kasper Hjulmand’s free-scoring Danes up next for the Czech Republic, Holeš has entered top form at the right time.

In the weeks before EURO 2020, there was concern in the Netherlands that Frank de Boer would be unable to get the best out of his talented squad. During the group stage, the former Atlanta United head coach calmed some of those fears by guiding the Netherlands to the last sixteen with relative ease. However, De Boer’s failure to offer a tactical solution to the problems caused by Matthijs de Ligt’s dismissal will reinvigorate his critics.

Jaroslav Šilhavý, meanwhile, departs Budapest with the price of his stock at an all-time high. Stationing Tomáš Holeš alongside Tomáš Souček proved to be a masterstroke, with the Czech Republic’s double-pivot neutralising the threat posed by the Dutch midfield. Following their upset of the Netherlands, the Czech Republic will travel to Baku to face Denmark on Saturday 3 July with a place in the semi-finals on the line. For a Czech side that has gelled when it matters most, anything feels possible.

There’s a rather unique mentality that comes with a sending-off. Whilst the team with ten men are clear in adopting a siege mentality and looking to create chances on the break, the team with the man advantage can become dogged by expectation. Czech Republic for much of the first half looked to nullify Holland’s attacking threat, soaking up pressure and rarely looking to break out of their defensive shape.

So Mathijs de Ligt’s sending off could potentially have thrown their game plan into disrepute, allowing the likes of Memphis Depay and Denzel Dumfries to capitalise on the break. Ultimately though, Jaroslav Šilhavý’s side rose to the occasion, counter-pressing effectively and boxing Holland in. Having initially struggled to open Holland up, the Czechs found joy through the dynamic running of Vladimír Coufal before taking the lead through Tomáš Holeš. 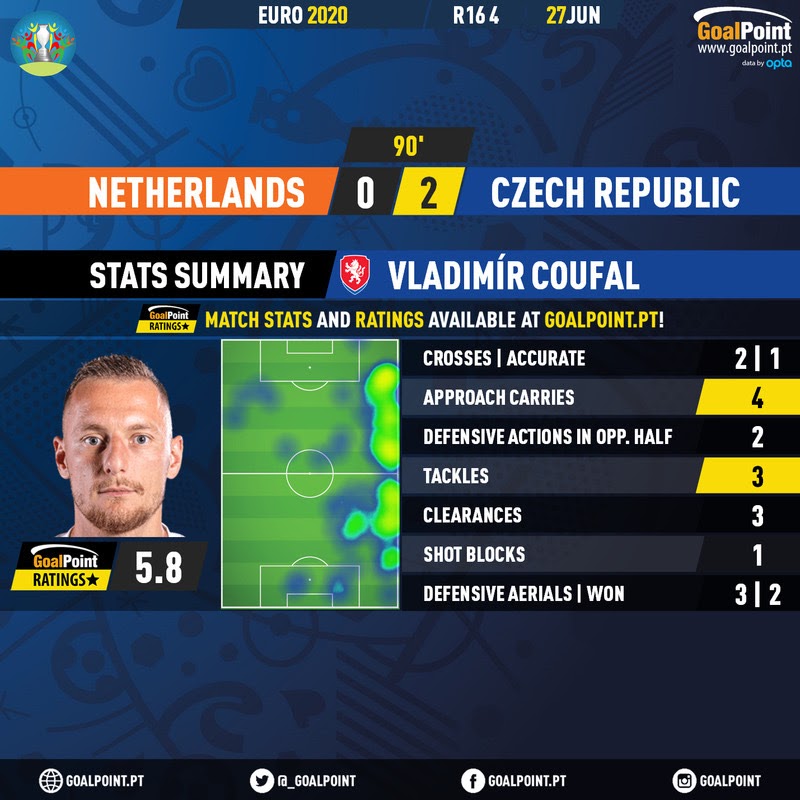 Once again, the West Ham fullback gave a disciplined performance and allowed the Czech Republic to pull off the biggest upset of the tournament so far.

Assured in possession and able to pry on the space left by Holland as they searched for an equaliser they were then able to double their lead through Patrik Schick. It was an exercise in patience and dedication from a team that had only won one of their previous seven games in the European Championships.

The Dutch came into the tournament among the favourites to lift the trophy, and after three wins from three in the group stages they were widely expected to progress to the quarter-finals. The red card changed the rhythm of the game, but the Dutch for all their possession had been stifled throughout. Aside from the tractor engine that is Denzel Dumfries, Holland lacked intensity and a real goal threat.

Frank de Boer faced plenty of criticism for his lack of managerial prowess heading into the tournament, harrowing spells at Crystal Palace and Inter Milan having hindered his reputation on the continent. Defeat today will have made calls for his dismissal louder, and irrespective of the circumstances in which Holland lost there appeared to be no coherent plan. 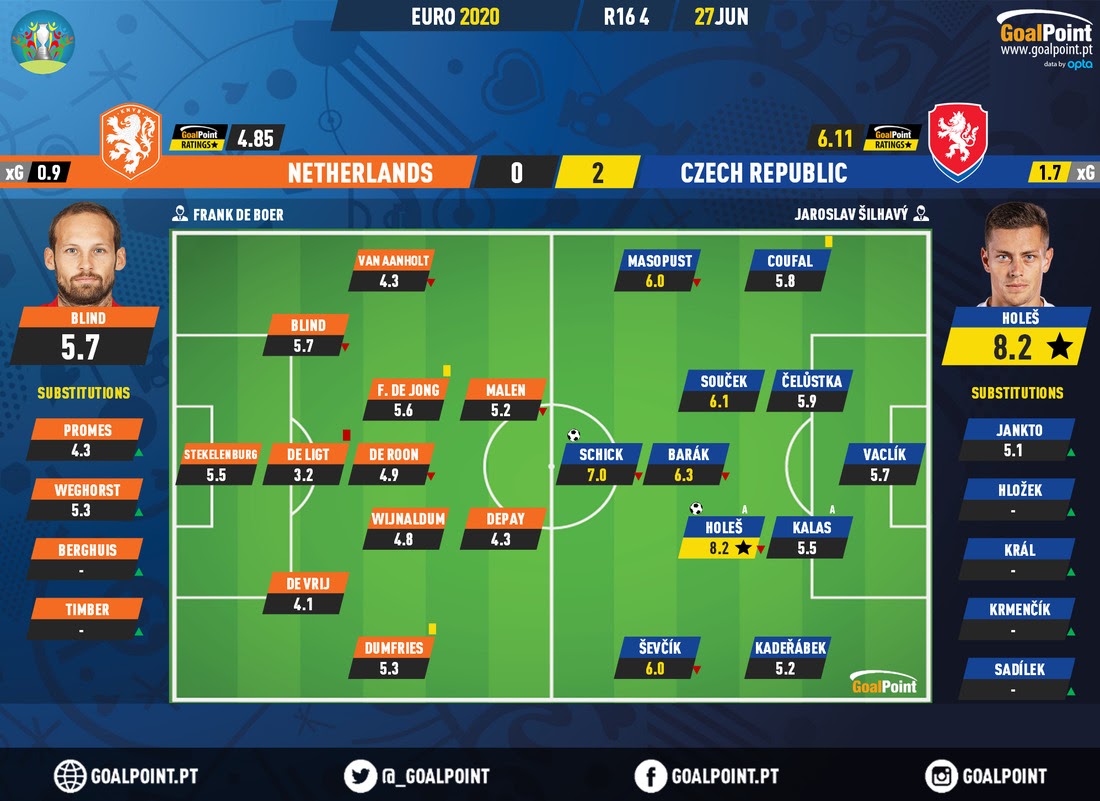 The Netherlands fell prey to the Czechs’ man-marking set-up and ended up turning in a dismal performance in the Round of 16.

Passive in possession and vulnerable out of it, the 15 second period on which the game turned was symptomatic of Holland’s performance in Budapest. Donyell Malen had just spurned an excellent opportunity to give Holland the lead, as he failed to take the ball around Tomáš Vaclík. But Holland were laboured in their attempts to reset, dropping off and allowing the Czech Republic to go long to Schick.

In applying pressure to De Ligt, he forced the youngster’s hand, and from that, the Juventus centre-half handled the ball which ultimately led to his dismissal. There was a clear lack of organisation and intensity that has plagued some virtuosic offensive displays from Depay and Georginio Wijnaldum throughout the group stages.

Naive performances in transition were ultimately symptomatic of a niave manager who has struggled to make his mark in the dugout. The Dutch, a team who had shown plenty of promise, will likely rue their inability to keep hold of Ronald Koeman who seemed to be getting the best out of a young Dutch side before his departure to Barcelona.