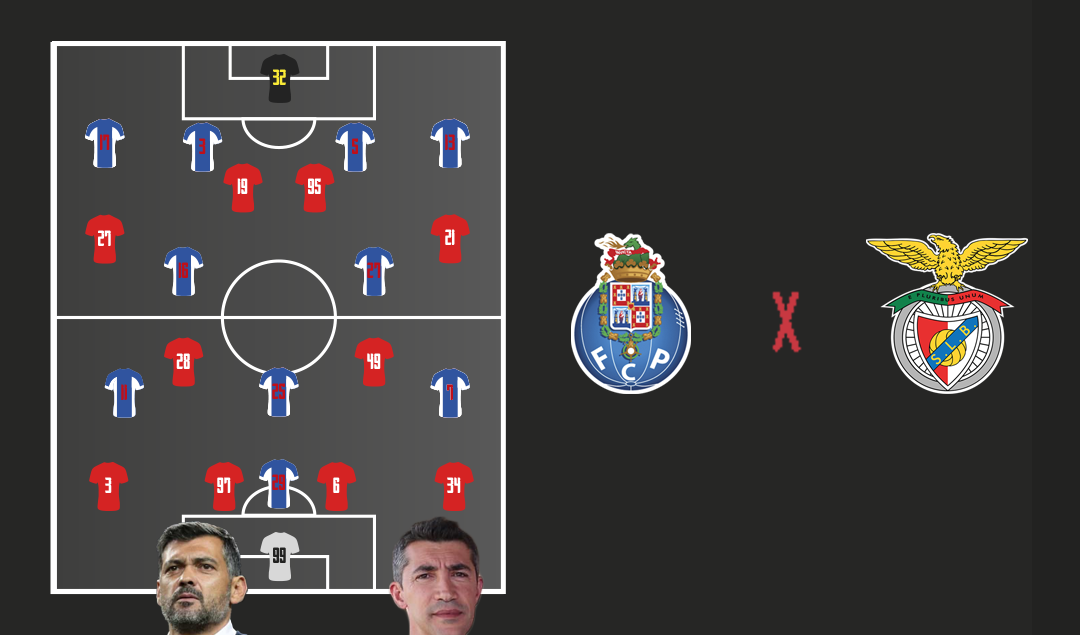 The Clássico between FC Porto and Benfica is by far the biggest game of the country. The two teams have been almost the only contenders for the Portuguese title in the past 10 years and are not only the best teams on the pitch, put also in terms of their club administration and structure.

The two teams with more titles in the country have a hostile rivalry marked by the cultural differences from the north and center of the country, but also because they are the biggest representatives of the two biggest cities in Portugal (Lisbon and Porto).

This past Saturday, the leader of the Liga NOS table, Benfica, visited Porto with a comfortable seven point difference for the Dragões, second in the league.

It is impossible to not talk about the game in the first round, where Porto visited Benfica and beat their rivals after an elite performance, not giving any chance to Benfica after beating the current champions 2-0. Since then (August 24th), Benfica was in a 16 game winning streak for the league, giving them advantage in the title race and on the way for the second championship in a row under Bruno Lage.

This weekend’s game was almost a deja-vu of that first round. Porto dominated the first minutes with high press and intensity, forcing Benfica to drop on the field for large periods of the first ten minutes which resulted in a 1-0 advantage after Sérgio Oliveira’s volley.

Tecatito Corona has been Porto’s best player of the year so far and was, again, decisive in this game. Playing as a right-back, Tecatito was a constant threat to Benfica’s left side, combining with Otávio and Marega really well on the right side and joining the three attackers constantly (Marega, Soares and Luís Diaz), as you can see in the picture.

Benfica’s response was almost immediate (only took them eight minutes to tie the game), trusting the quality of a re-born Adel Taarabt to control and dominate the midfield area, by combining with Rafa, Pizzi or Chiquinho. The movements of the three Portuguese attackers created space in between lines to attack, and it was in one of those plays that Benfica ended up scoring their first goal, by Carlos Vinicius, the Brazilians striker who is in great form, with 19 goals scored in 29 games this season.

The game then became more even, with no team being able to create many chances, which translated the game into a midfield battle won by FC Porto. Conditioned by early yellow cards in the first half, Julian Weigl and Taarabt were not able to keep up with Otávio, Oliveira and Uribe in the midfield, where Porto had a clear advantage and won 20 more duels than Benfica.

Talking about duels, Marega against Ferro was a one-way battle for the Malian striker, who dominated the young Portuguese center-back in almost every play. With that clear advantage, Porto did not hesitate in exploring the spaces around Ferro, and that’s how Marega got free to assist for the third and decisive goal of Porto, after the Dragões got a penalty kick scored by Alex Telles to make it 2-1.

At half-time, it was clear that Porto’s head coach Sérgio Conceição had a clear game plan advantage against Bruno Lage. By exploring Benfica’s weaknesses on the left side, Porto was dominant and scored three goals against Benfica in 45 minutes, who had only conceded eight goals so far. The absence of Franco Cervi’s ability to help defending on the left wing exposed Alex Grimaldo and Ferro, who had nightmares against the trio Corona, Otávio and Marega.

The second half was more balanced, worse played, even though Benfica scored an early goal that could have made us think the game would be emotive and played until the last second.

Porto was very comfortable for most of the second 45 minutes with the 3-2 advantage, which was even more clear after Taarabt´s substitution, who had a couple of fouls already on a yellow card and forced Lage to replace him early on the second half. The Moroccan is Benfica’s most influential player on the ball, and without him the eagles were not able to create opportunities or to connect their offensive plays.

With two, and then three, strikers on the field after Seferovic and Dyego Souza came in, Benfica put all their hopes in long crosses and aerial duels, where Pepe, Marcano and Mbemba were very comfortable and winning most of their battles.

Conceição, once again, won the Clássico and sees his team getting closer to the top, only four points short from Benfica with 14 games to play in Liga NOS. Last year Benfica recovered seven points after being behind Porto, and that is what the Dragões will try to replicate this year. A hard but not impossible task for Porto, who is trusting now on Benfica’s opponents to win points against the current champions.