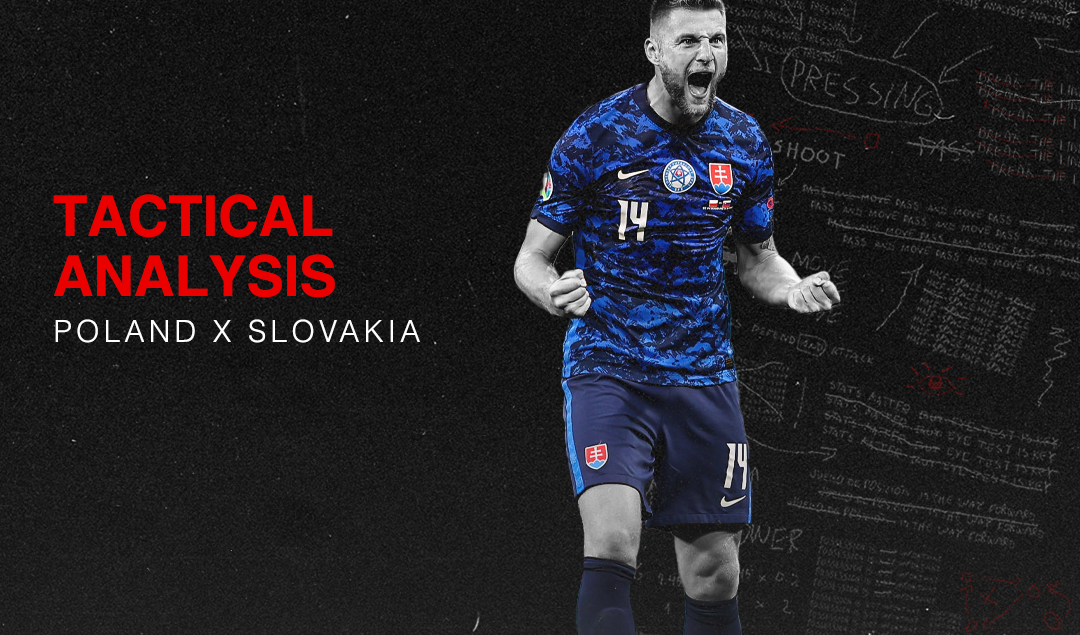 “The look on Polish faces tells the story,” ITV Sport commentator Sam Matterface remarked at full-time in St. Petersburg. “They lost the first game of their World Cup campaign three years ago and it set the tone for what would be a very difficult tournament for them. They hoped to avoid that disappointment this time out but that outcome hasn’t transpired.”

As a result, Poland head coach Paulo Sousa could only shake his head as his side left the field following their 2-1 defeat against Slovakia on Monday evening.  The Orły started poorly, falling behind after 18 minutes courtesy of a Wojciech Szczęsny own goal – although Robert Mak deserves credit for Slovakia’s opener.

After receiving possession on the left flank, the Ferencvárosi midfielder cut inside, beating two defenders in the process, before firing a low shot against the upright. Having already committed to his dive, Szczęsny was powerless to resist as the ball cannoned off his back and into Poland’s net. The favourites equalised almost immediately after the break, though, with Karol Linetty beating Martin Dubravka following a cut-back from Maciej Rybus.

However, Poland’s lead didn’t last. Moments after Grzegorz Krychowiak was dismissed for a second bookable offence, standout centre back Milan Skriniar scored the winning goal with a firm strike following a Slovakian set piece. Although the favourites had opportunities to equalise in the closing stages, record-breaking Bayern Munich forward Robert Lewandowski was kept quiet by Stefan Tarkovic’s side.

The Repre’s win, the first major shock of EURO 2020, leaves Slovakia on the cusp of qualification for the knockout rounds, with only eight teams eliminated following the group stage.

Man of the Match: Ondrej Duda

In a match defined by the head coaches’ tactical battle, Köln forward Ondrej Duda emerged as the surprise star. Although the 26-year-old was kept off the scoresheet, Duda’s positional fluidity was key to his side’s success against Poland at the Gazprom Arena. Ostensibly deployed at centre forward by Tarkovic, the former Norwich City loanee proved impossible to track, particularly in the first half when Slovakia won the lion’s share of loose balls. 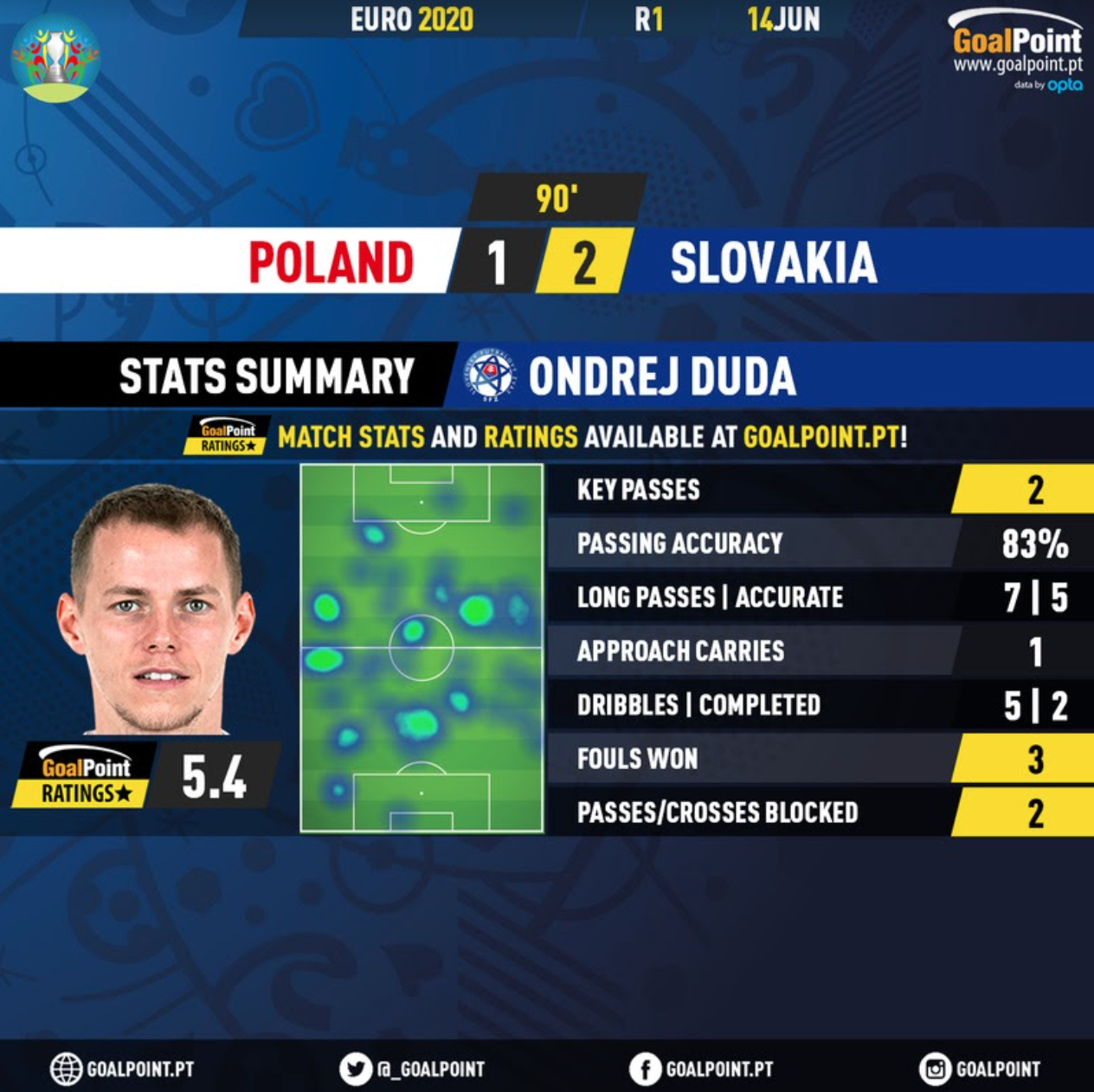 Ondrej Duda was a key player for Slovakia as the Sokoli earned their first win at a major tournament since defeating Russia 2-1 during the group stages at EURO 2016.

As shown by the 5’11” Slovak’s heat map for his nation’s opening game of the European Championship, Duda was given license to roam as Tarkovic’s men transitioned from defence to attack against Poland. Moreover, before Slovakia’s first goal of the evening, Duda proved that the Sokoli could test their opposition by curling a low shot narrowly beyond the base of Szczęsny’s right post. Even without a goal to his name, Duda was an important figure in attack, drawing attention away from all-time leading goalscorer Marek Hamsik.

Before the break, Duda was also a key creative force for the eventual victors – completing five long passes as Tarkovic’s side looked to break quickly in the face of Poland’s unprotected back three. The Snina native also proved vital in breaking up the game for his side, thrice earning Slovakia free-kicks before he was substituted in the final minutes of play.

Although Paulo Sousa’s side improved following the interval, Poland faces an uphill battle to reach the round of sixteen at EURO 2020. The Biało-Czerwoni travel to Sevilla for their next fixture, an away game against Luis Enrique’s Spain, knowing that they must secure at least a point if they are to escape Group E.

Meanwhile, Slovakia can approach their next fixture – a meeting with Sweden in St. Petersburg – knowing that a point will likely see them progress to the knockout phase. Although Janne Andersson’s rigid 4-4-2 will ask different questions of Slovakia than Poland’s 3-4-3, the Swedes could prove to be beatable opposition for the Sokoli if they continue to be so clinical in front of goal.

How Slovakia Won the Tactical Battle in Saint Petersburg

Stefan Tarkovic’s decision to play without a recognised striker proved to be a masterstroke, especially in the first half. A  natural attacking midfielder, Ondrej Duda took up the centre forward position on paper but would often drift away into the wide areas, allowing central midfielder, Marek Hamsik to occupy as well.

Slovakia lost the possession battle but they were the better team with much more fluid movement going forward and the kind of purposeful football exhibited in the first goal. Tarkovic’s plan worked well thanks to his personnel, Duda and Hamsik were energetic. Playing as forwards when Slovakia had possession and midfielders when without the ball. 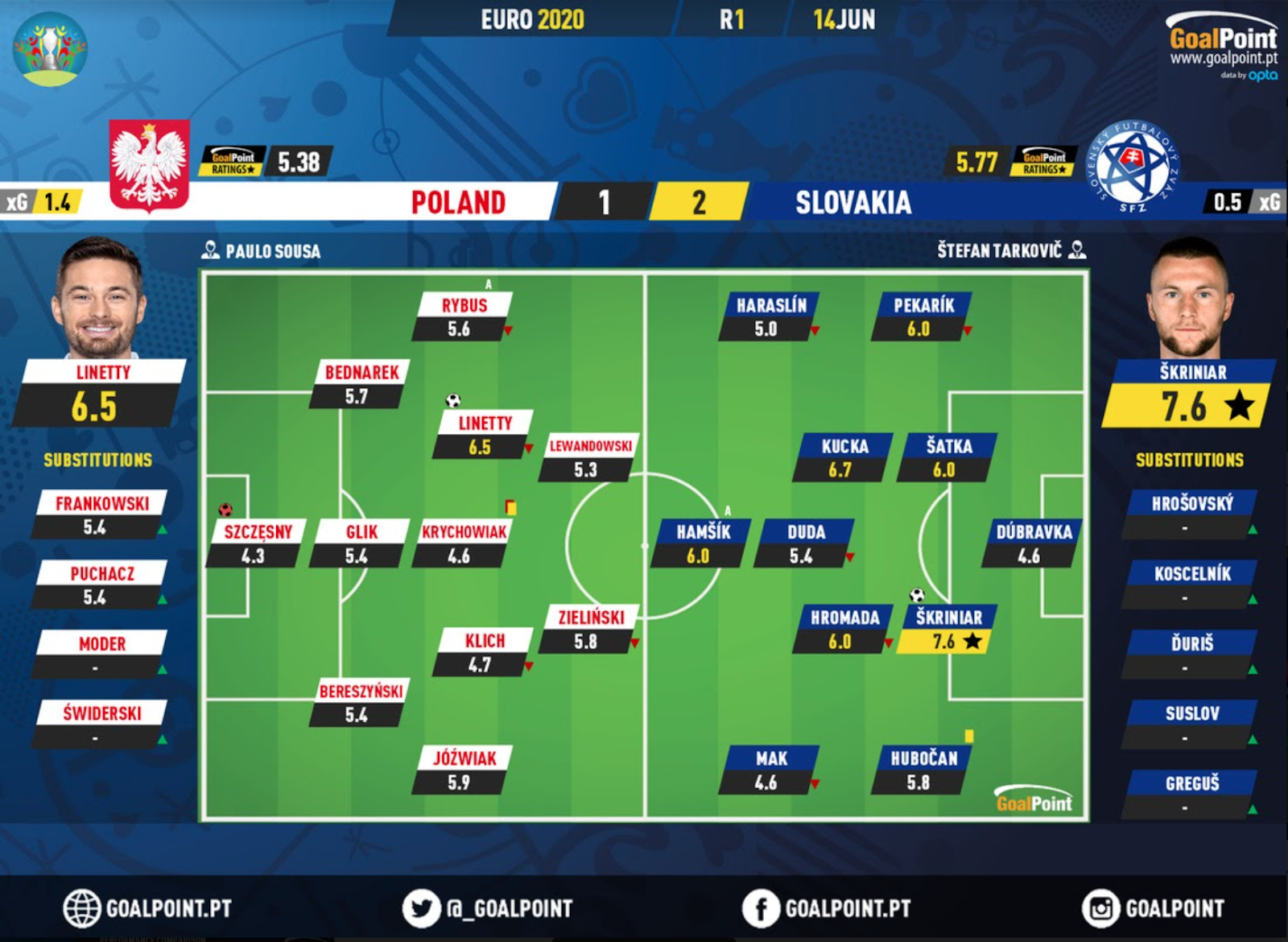 How Slovakia won the tactical battle visual(s) subtitle(s): Stefan Tarkovic opted to mobility and flexibility with the false nine approaches and switching between formations mid-game.

The Slovakian formation transitioned from 4-4-1-1 to 4-4-2 and at a point 4-1-5 with the excellent Jakub Hromada left with the responsibility of protecting the defence whenever Juraj Kucka forrayed forward. ‘The Falcons’ did well to block the passing lanes for the Polish team, Duda and Hamsik strategically dropping deeper to help Slovakia achieve the double block in midfield ahead of the central midfield duo of Juraj Kucka and Jakub Hromada.

As a result, Poland struggled to create in the first half and were forced to rely on crosses and the Slovakian centre back pairing of Satka and Skriniar were solid with the former putting up brave blocks and the latter scoring the match-winner.

Poland’s midfield stalwart, Gregorz Krychowiak got sent off in the 62nd minute, an occurrence which directly affected the outcome of the game. For a short period, Poland were undoubtedly the better team. Paulo Sousa must have given his team an earful at halftime as they came out of the break looking like a completely different side.

Faster ball movement and more dynamic running especially from the fullbacks helped Poland unsettle Slovakia in the first 10 minutes of the second half and they capitalised. The improvement in their tempo led to an equaliser by Karol Linetty and more chances created. At 1-1, the momentum had already shifted towards Poland until Krychowiak picked up his second silly yellow card of the evening. 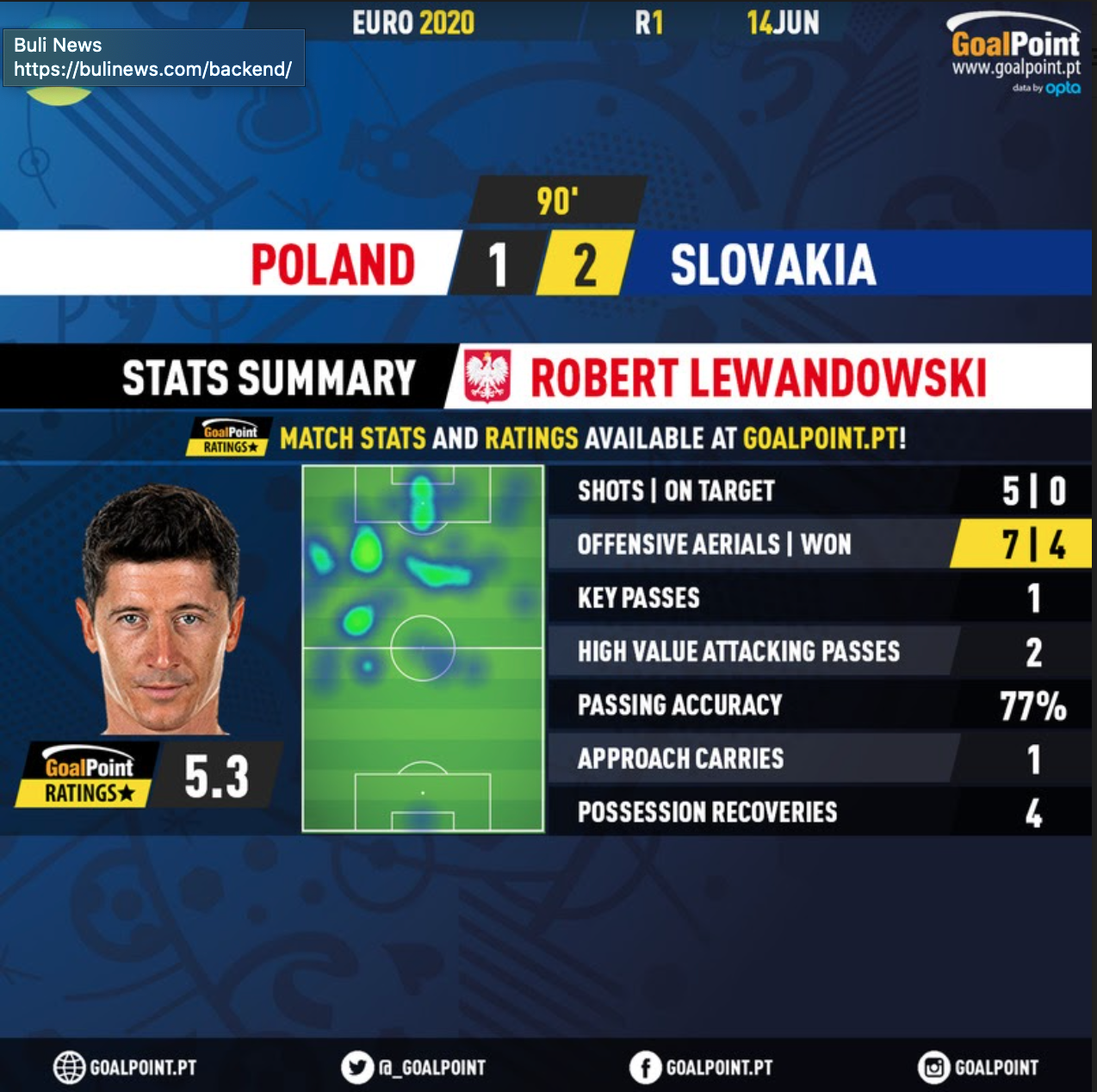 Robert Lewandowski failed to hit the heights expected of him against Slovakia, and he must improve in the coming games for Poland to stand a chance of progressing from their group.

Slovakia capitalised on the numerical advantage and regained the momentum, pressing high up the pitch with renewed confidence and eventually retaking the lead. If Paulo Sousa aims to bounce back from this setback and progress into the knockout stages, he needs to find a way to make Poland replicate the intensity they showed in the early stages of the second half and in the additional time consistently in the next two group games.

It would also help the Polish cause to not be let down by the experienced team leaders like Krychowiak with his avoidable bookings and Robert Lewandowski’s subpar performance. Zero shots on target and an xG of 0.37 goals for Robert Lewandowski in the same game where Jan Bednarek and Karol Linetty missed big chances. Says a lot about his movement and positioning. If Lewandowski can play to his expected level as one of the best strikers in football history, Poland still have a chance of making it out of the group.