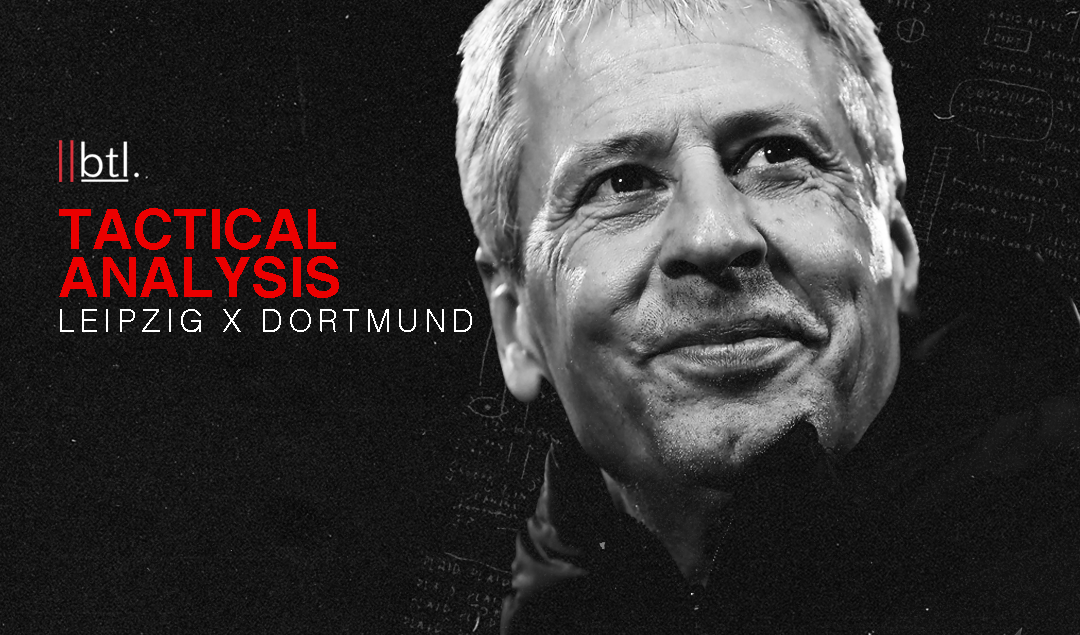 Two of the most exciting sides in Europe imploding with young talent met last weekend at the Red Bull Arena. Both Lucien Favre’s Borussia Dortmund and Julian Nagelsmann’s RB Leipzig spent most of the season in hot contention to achieve the Meisterschale before Hansi-Dieter Flick took over in November and led Bayern to another league title. Going into the match, Nagelsmann had won just one of his eight matches against Dortmund, and the club itself have not achieved victory against Dortmund in their past four matches.

During this tactical analysis we’ll examine the tactics of both teams in possession, how Giovanni Reyna disoriented Leipzig’s defensive shape, and explore why Leipzig are conceding so many goals.

BVB on the other hand lined up in what has become their usual 3-4-2-1. Two youngsters would make their first ever Bundesliga starts; notably, Giovanni Reyna would start over Jadon Sancho and Mateu Morey at right wingback. 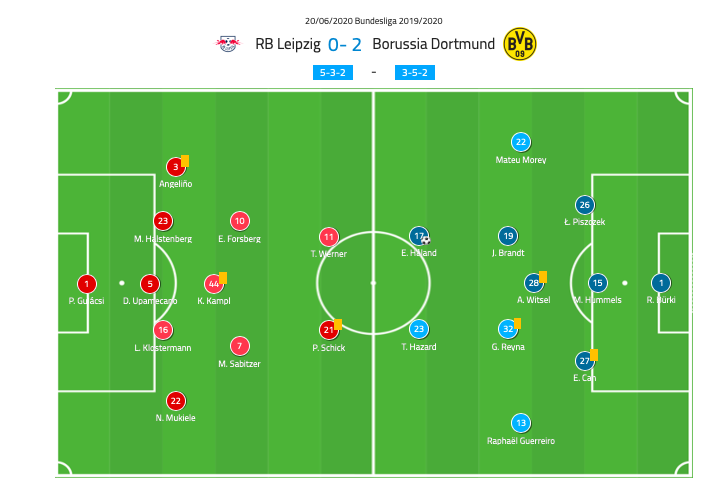 Leipzig Play Through the Thirds

RB Leipzig boast the second highest xG of any team in the Bundesliga, as their emphasis on progressive passing angles and positional superiority has seen them run opposition defensive blocks ragged.

In possession, Die Roten Bullen were positioned in their usual 3-2-5 against Dortmund’s 5-3-2. Dortmund did not particularly press high and were afforded plenty of space, usually opting to play through one of the flanks with a diamond pattern. This created a 4v3 numerical advantage, with one of the ball near side attacking midfielders dropping deeper in the half-space to assist the wingback, center back and central midfielder. 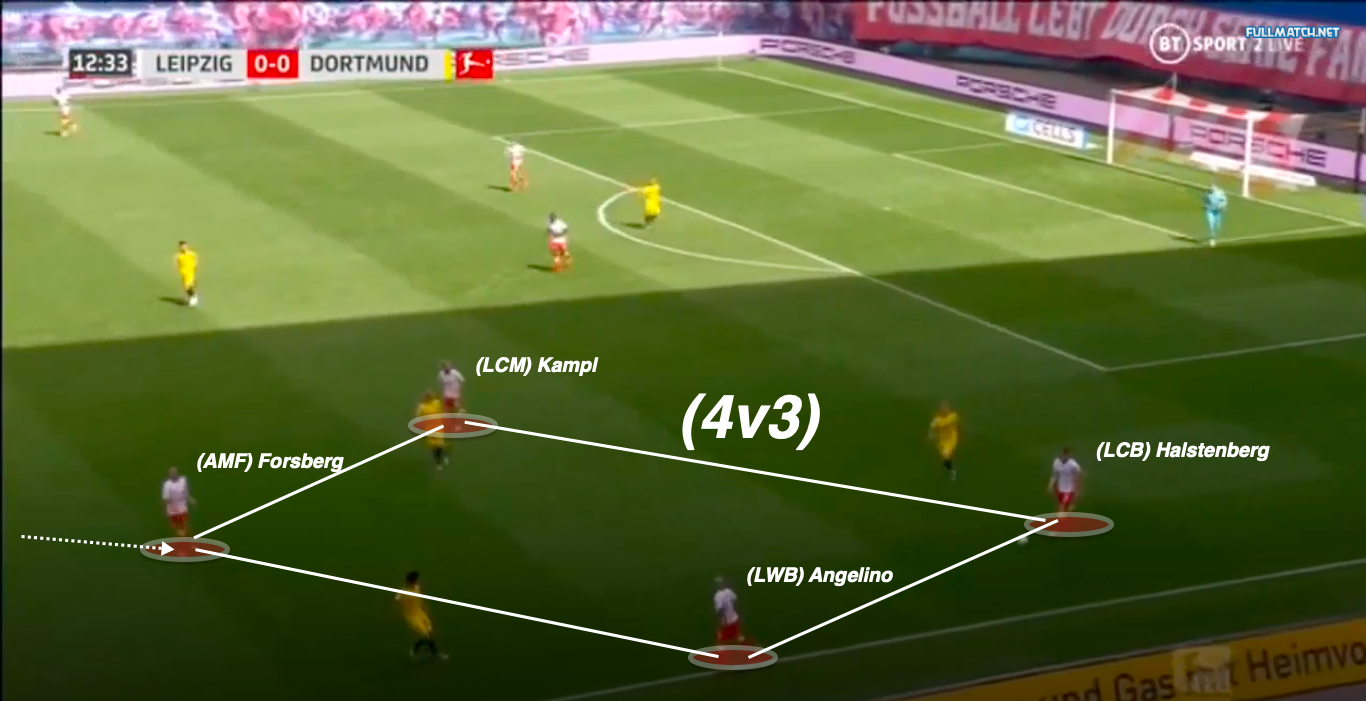 Through positional rotations, they sought to manipulate the compactness of the opposition shape and find a passing angle back inside to an attacker in space. Another diamond pattern in the buildup of the middle third facilitated access to quick ball rotation side to side, as the outside back could carry the ball forward into either side making a 4v3 overload, in theory. 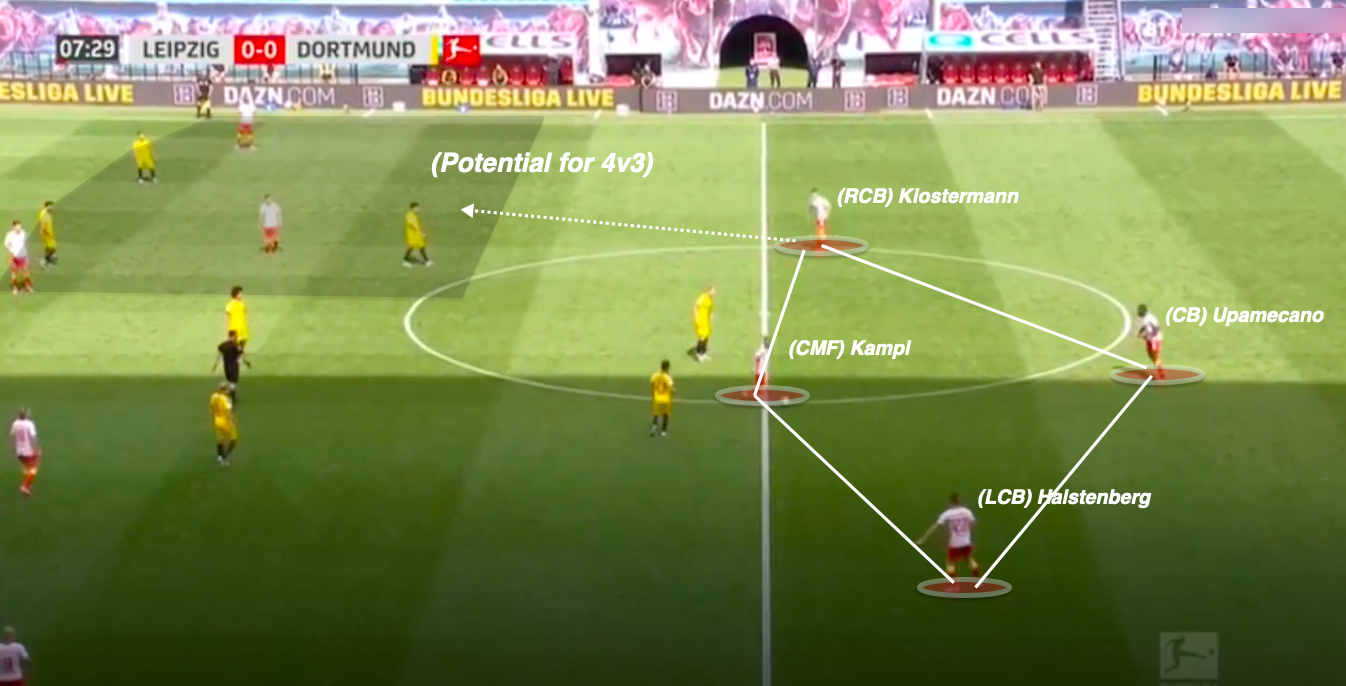 However, this is where Dortmund’s road block began. Their way of preventing these patterns of play was through defensive midfielder Axel Witsel.

As three players would go to match Leipzig’s three, Witsel would lurk outside of the ball-near flank waiting for the fourth player to arrive while attempting to create a new passing angle and overload. Leipzig would sometimes try to play through these situations with their quality, but in most cases would end up trapped and coughing up possession of the ball. 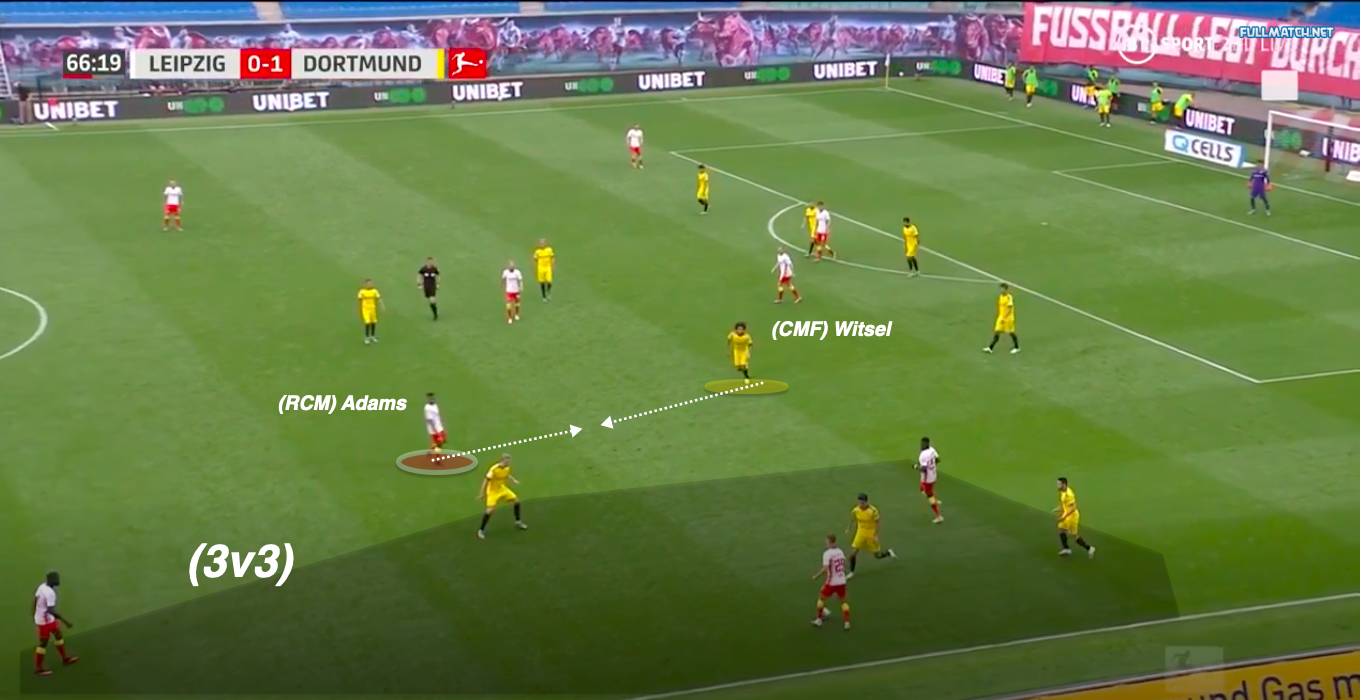 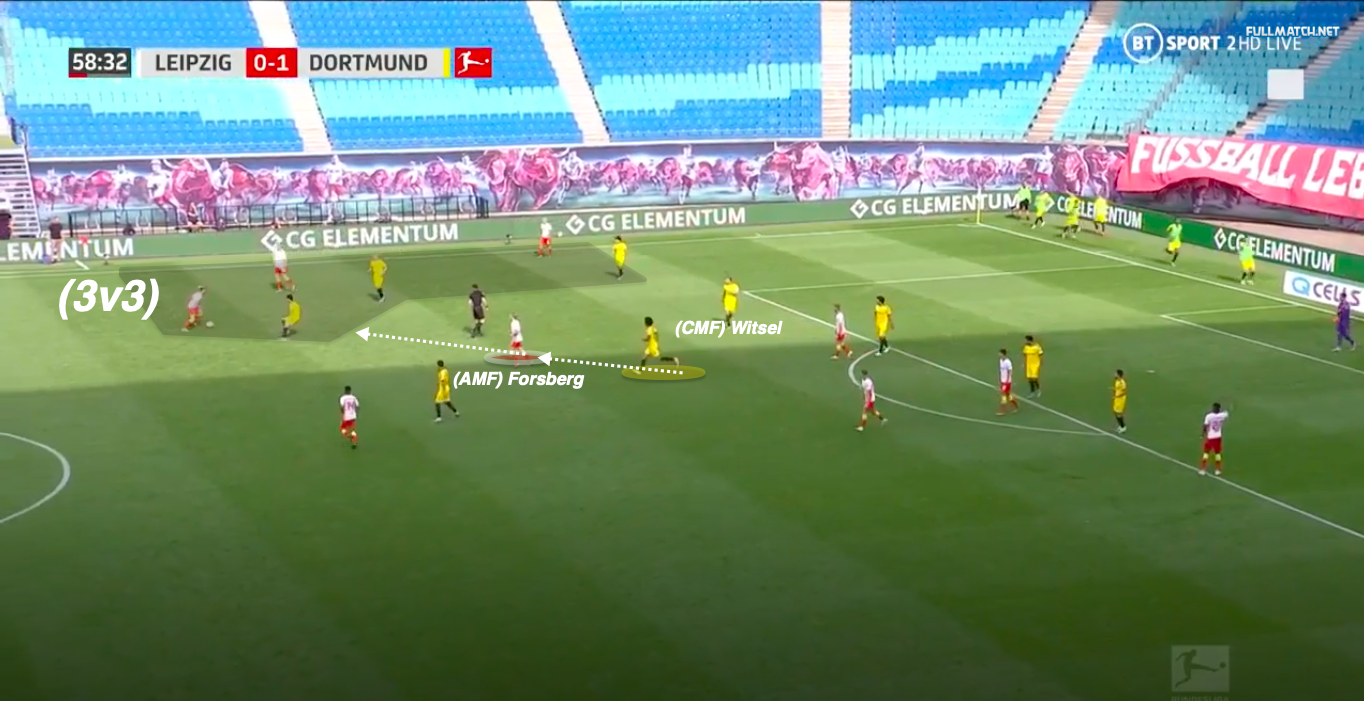 In possession, Leipzig’s 3-2-5 naturally creates an overload against oppositions with a back four. From here, Leizpig’s forwards receive the ball in positions where they weaken the opposition defensive shape and can make quick combinations between them. But with Dortmund lining up with a back five it created a dynamic where in the rare sequence that they decided to play vertically, a spare center back could engage the forward, intercepting the pass or stifling them as they received the ball.

Nevertheless, Leipzig looked most dangerous in these attacking sequences playing vertically between the forwards in tight spaces. 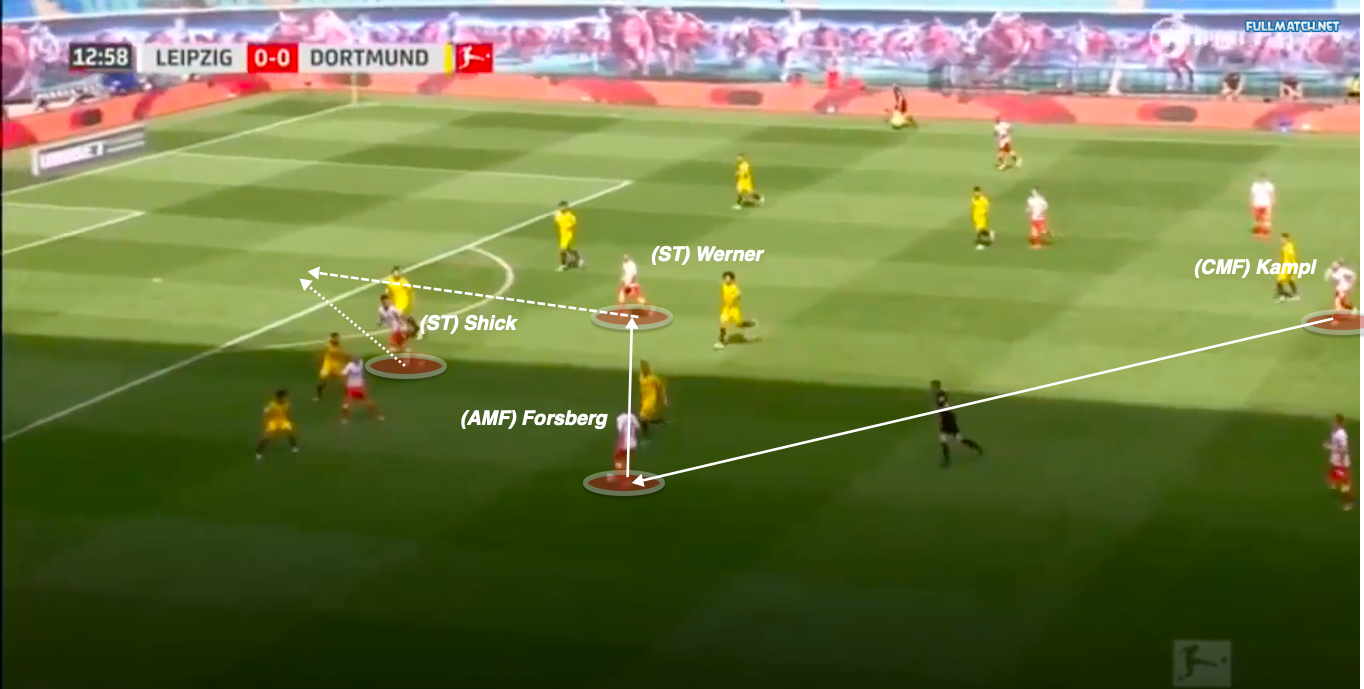 During the 2nd half, there was a real lack of depth between the lines as Timo Werner and Marcel Sabitzer were taken off.

In this sequence, Dayot Upamecano plays into Emil Forsberg and he is completely isolated between the midfield and defensive line with no immediate passing option, as most players are positioned around Dortmund’s defensive shape rather than inside. 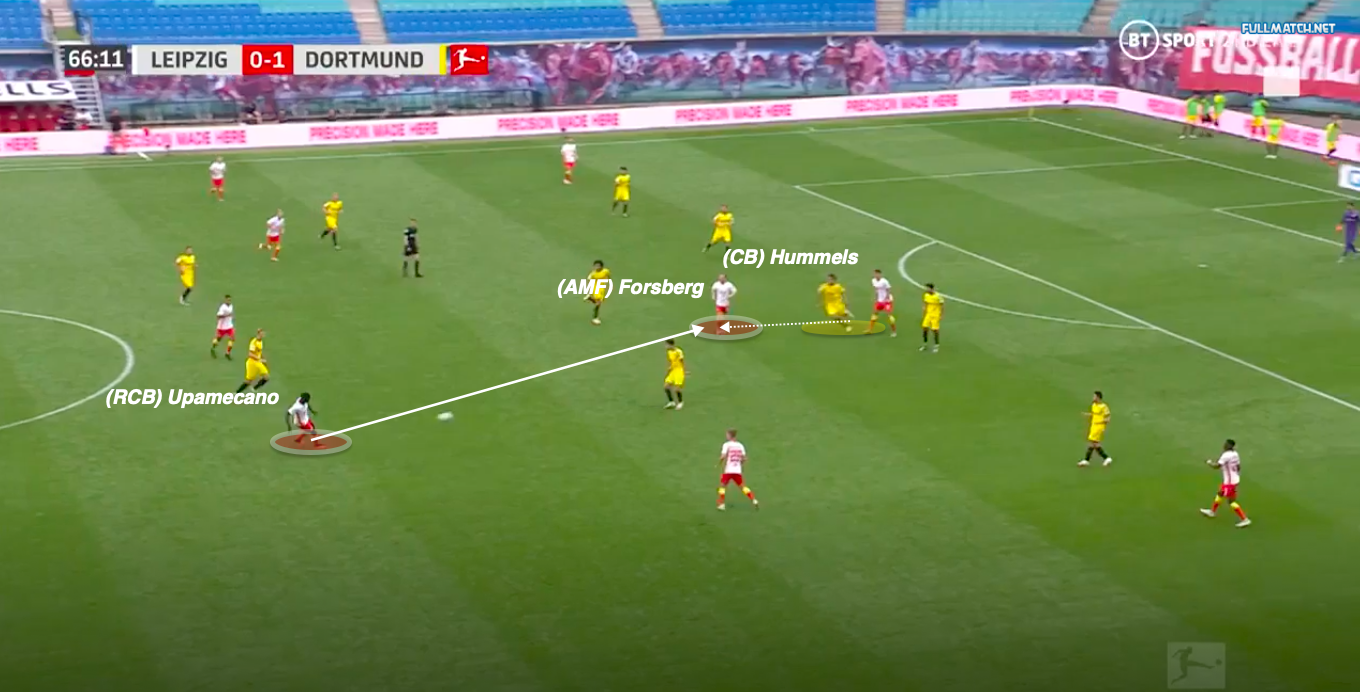 Since the restart, Leipzig have leaked 10 goals in eight games, a poor run of form considering they’ve conceded the second fewest goals in the Bundesliga’s top six.

When defending in the middle and attacking third they settled into a narrow 5-3-2 shape, which in turn created space in behind in the wide zones. Dortmund would exploit this space through quick ball circulation between their back three and advanced wingbacks to progress the ball forward into the attacking third with no immediate resistance.

It was practically free territory and Dortmund used it in different ways. Naturally, BVB had a 3v2 numerical advantage against their first line of pressure, giving access to optimal ball circulation, and once one of the outside backs received a pass they had ample time and space to carry the ball forward. 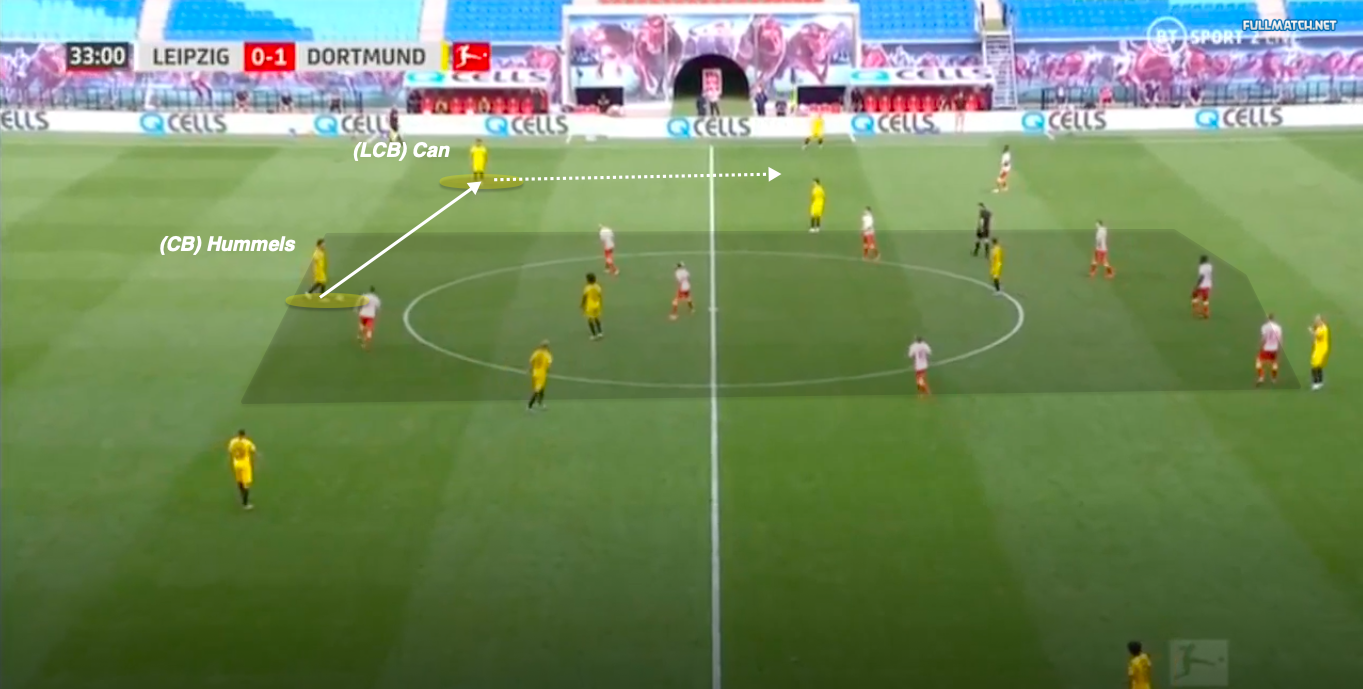 As it took time for Leipzig to shift side to side, Dortmund could take advantage of Leipzig’s isolated wingbacks at times. Here, Lukasz Piszczek carries forward and by the time he is being closed down, he has a 2v1 opportunity against the left wingback Angeliño, with Morey making a run in-behind that saw Dortmund bypass Leipzig’s entire defensive block. 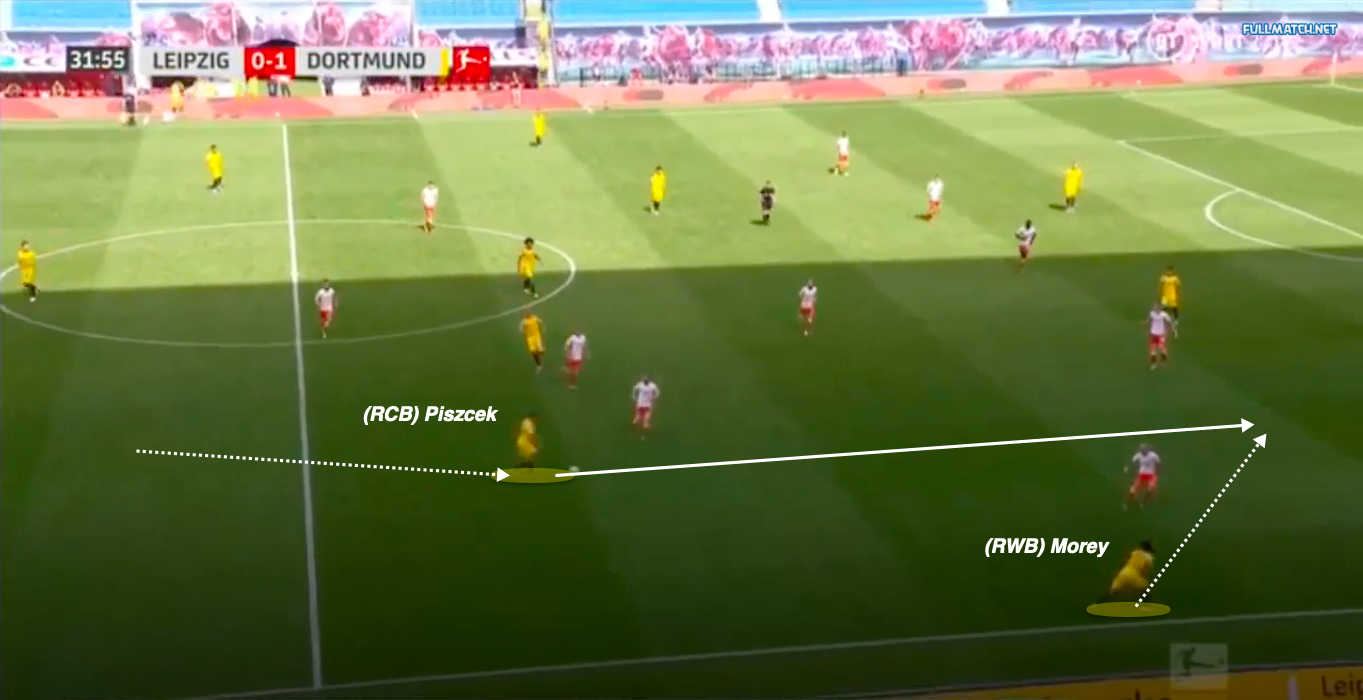 As the half went on, Leipzig would flood the ball-near side in an attempt to stop the progression of the outside backs. Dortmund would maintain a balance of width in their in-possession formation which allowed them to make switches of play to the opposite side wingback in space in the attacking third.

Morey failed to convert with his opportunities in behind Leipzig’s defense, but on the opposite flank left wingback Raphael Guerreiro created four chances in the match, the most of any player. 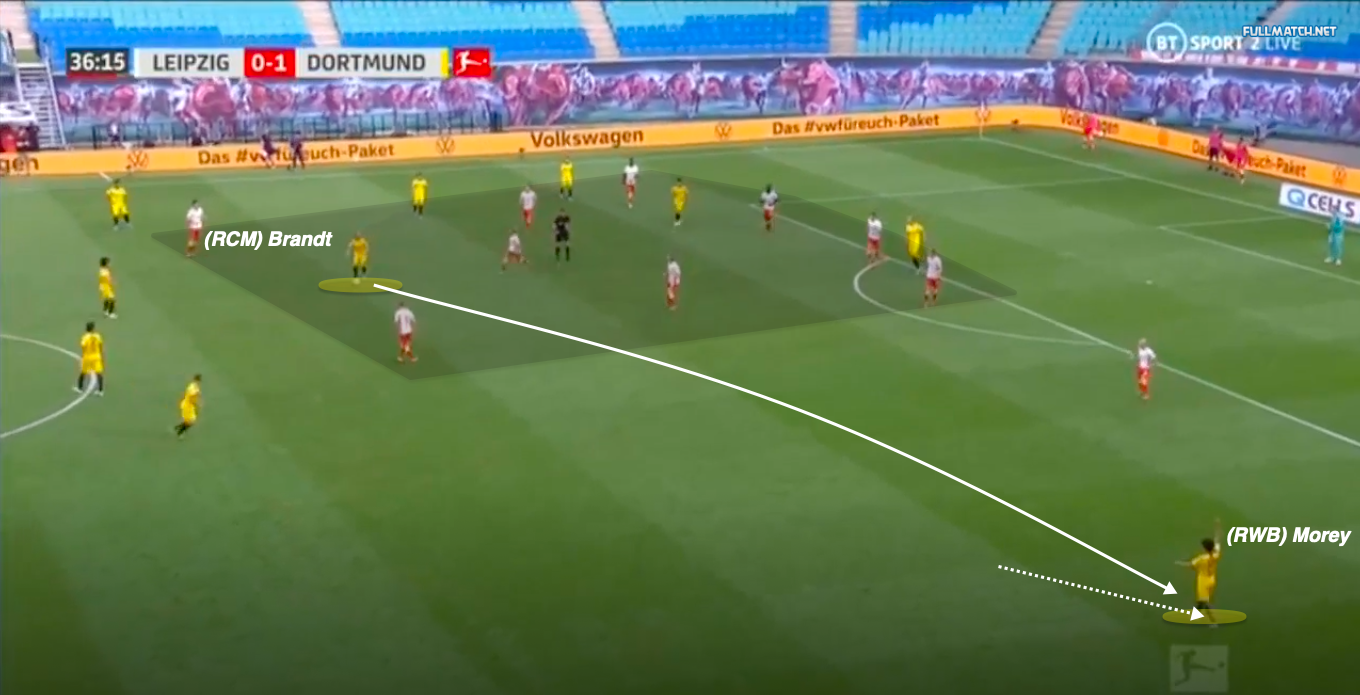 With the introduction of the 3-4-2-1 at Dortmund, the two attacking midfielders are tasked with creating passing angles between the lines throughout the thirds in the right and left half-spaces. Leipzig would particularly struggle against this facet of Favre’s tactics.

Out of possession, Leipzig settled in a 5-3-2 in the middle and defensive third, but when Dortmund were playing in their defensive third, one of their midfielders would step up to pressure the ball carrier and attempt to force his pass to the fullback making it a 3-4-3.

Once one midfielder would step up, Leipzig would be left in a 2v2 situation with their double pivot against Dortmund’s. This left the door wide open for one of the attacking midfielders to create a situation in which they could receive the ball bypassing the first two lines of pressure. Youngster Giovanni Reyna thrived in these spaces, exploiting movements.

Mats Hummels also played a big role acting as a deep playmaker, executing the most passes of any player on the pitch throughout the 90 minutes. Here, Forsberg steps forward, and Kevin Kampl steps toward Julian Brandt. Reyna recognizes the space between the now double pivot and positions himself behind them to receive a line-breaking pass to bypass Leipzig’s first two lines of pressure. From here, he turns and attacks Leipzig’s defensive line. 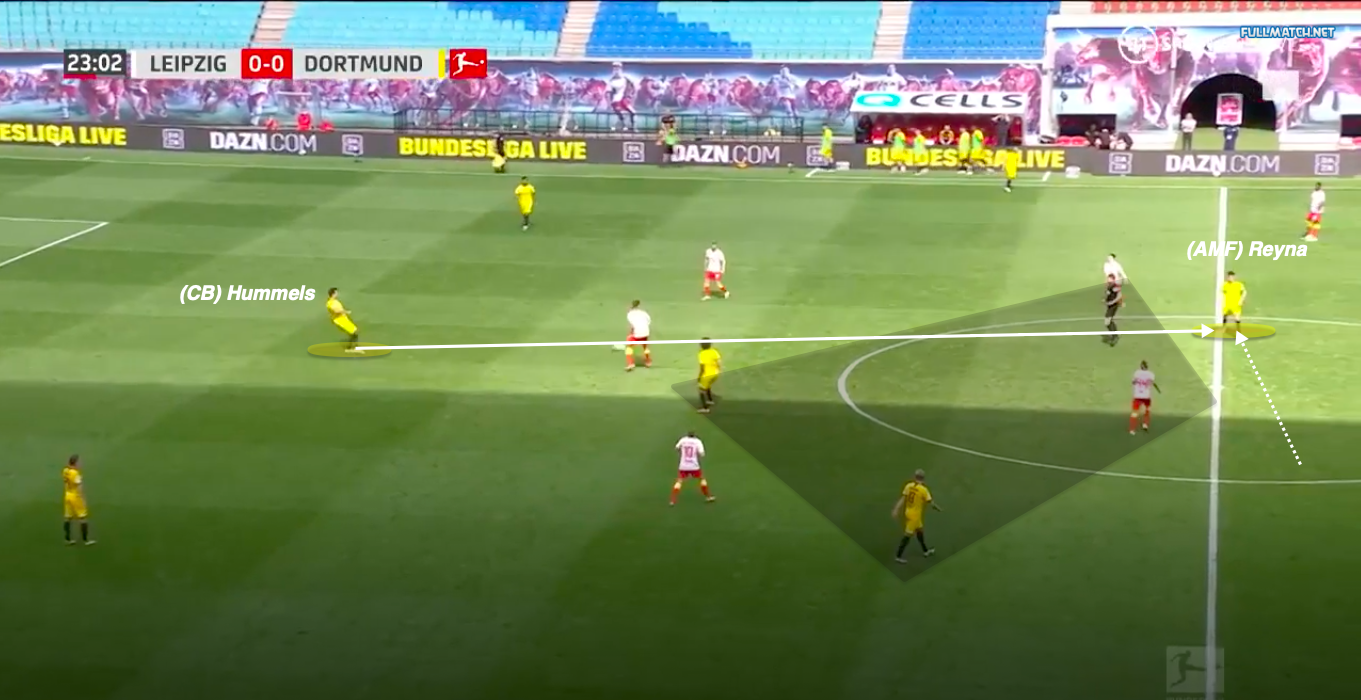 In the 2nd half, Leipzig switched to a 4-2-3-1, a shape they’re much more familiar with. But the same space would be exploited just in a different way.

In this sequence, Reyna drops to the back three to assist against the press. Thorgan Hazard intelligently shifts across to the left half-space to make the passing angle for Hummels to exploit the space and this time bypass six players. 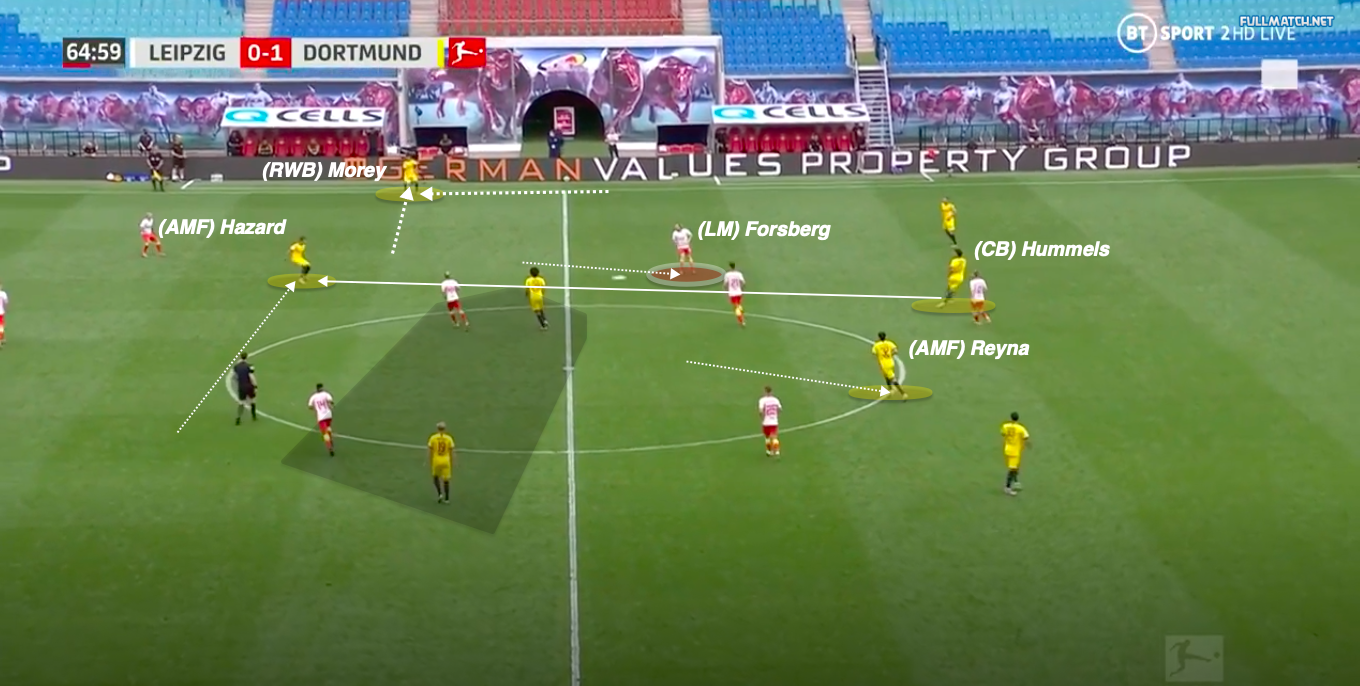 Leipzig were limited to four shots on target and limited to a shocking xG of 0.9, going on to lose 0-2. Their attacking patterns were completely counteracted and their lack of variation to play vertically resulted in a toothless attack.

Nagelsmann’s initial defensive approach in the first half was manipulated by Favre, allowing Dortmund to progress the ball freely through the wide spaces left by the narrow shape. Changing to a 4-2-3-1 gave Leipzig more control of the game when pressing and in possession, but the change in attacking personnel didn’t produce the required penetration through Dortmund’s compact defensive block.