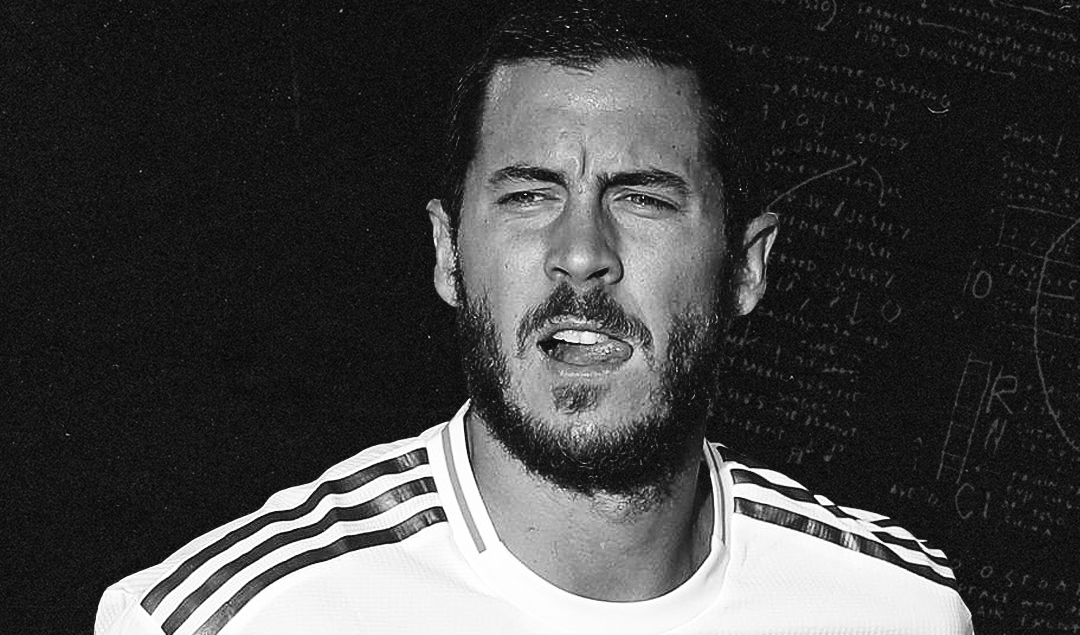 On Sunday, Real Madrid met Eibar at Real Madrid’s training facility – Valdebebas at Estadio Alfredo di Stefano stadium with a capacity of 6,000 instead of the 13 times bigger Santiago Bernabéu, currently closed for renovation. But it wasn’t to matter, since the game was played behind closed doors.

It was the first of Real Madrid’s “eleven finals” as claimed by manager Zinedine Zidane, since the 14-week stoppage. It was supposed to be a David vs Goliath game, but Eibar stood strong and gave them a proper game. Although the 3-1 scoreline might suggest otherwise, it was a game of few chances. Real Madrid dominated the xG by 1.27 compared to Eibar’s 0.43.

Real Madrid started the game with a 4-3-3 formation. Zidane made 3 changes in his side that last appeared in La Liga against Real Betis. Dani Carvajal and Eden Hazard were back in the starting lineup after gaining full fitness.

Moreover, Lucas Vazquez suffered a muscle strain and was replaced by Rodrygo Goes. Zidane decided to trust the midfield trident that won him three Champions League trophies in a row from 2016 to 2018, as Luka Modrić was preferred to Federico Valverde. Meanwhile, Marcelo received the nod ahead of Ferland Mendy at left back.

Eibar decided to go for a 4-1-4-1 formation, as manager José Luis Mendilibar changed things up to prepare for a fierce opponent. Paulo Oliveira got the nod ahead of Pedro Bigas, suspended Gonzalo Escalante was replaced by Sebastián Cristóforo, and Pablo de Blasis started on the wing ahead of Takashi Inui. Rafa Soares earned his La Liga debut as he started at the left-back position ahead of Cote.

Real Madrid on the Ball

In the build-up phase, Real Madrid’s center-backs would usually split wide and Toni Kroos or Casemiro would acquire the space in order to aid his defenders in the build-up phase. However, Eibar were keen on closing out the middle of the field, and pressed them high and blocked the passing lanes in the center of the park. 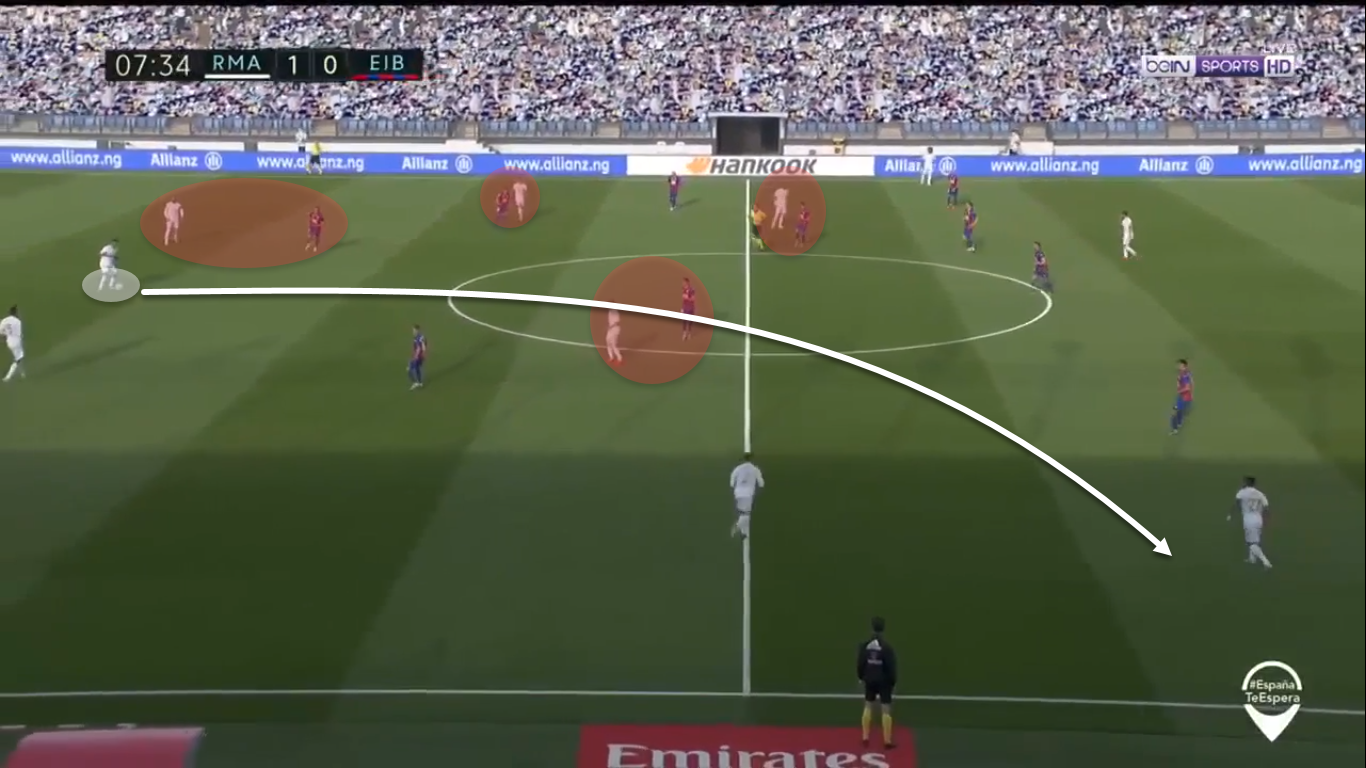 Here, Casemiro drops between the center-backs to help in the build-up. Eibar block all the options through the middle, forcing the Brazilian to go wide, and he plays a ball into Rodrygo’s feet.

As soon as Rodrygo receives the ball, the ball-sided fullback, winger and midfielder pressure him and Rodrygo is forced to play a back-pass into Raphaël Varane. 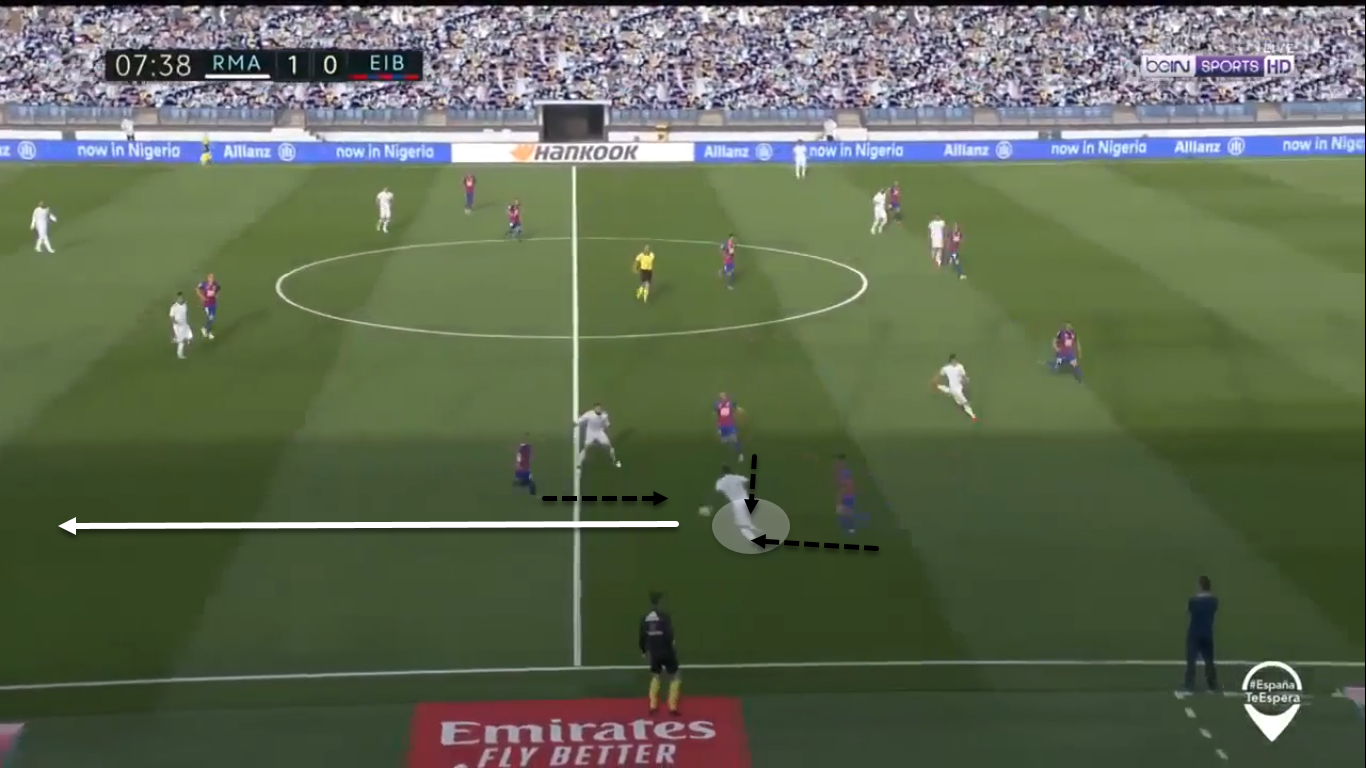 In order to get beyond this rigid Eibar defense, Real Madrid used several methods. The first method was to add more bodies into the middle of the park. In order to achieve this overload, Carvajal played as an inverted fullback and came infield when Madrid had the ball. As a result, Real Madrid would have more bodies in the middle of the park, stretching the Eibar defense and creating more spaces.

Here, Carvajal occupies an Eibar midfielder, thus leaving Modrić free in space. Sergio Ramos plays a pass into Casemiro who in turn finds the free Modrić. As Modrić attracts pressure, he plays a ball into Carvajal, and Madrid initiate a threatening attack. 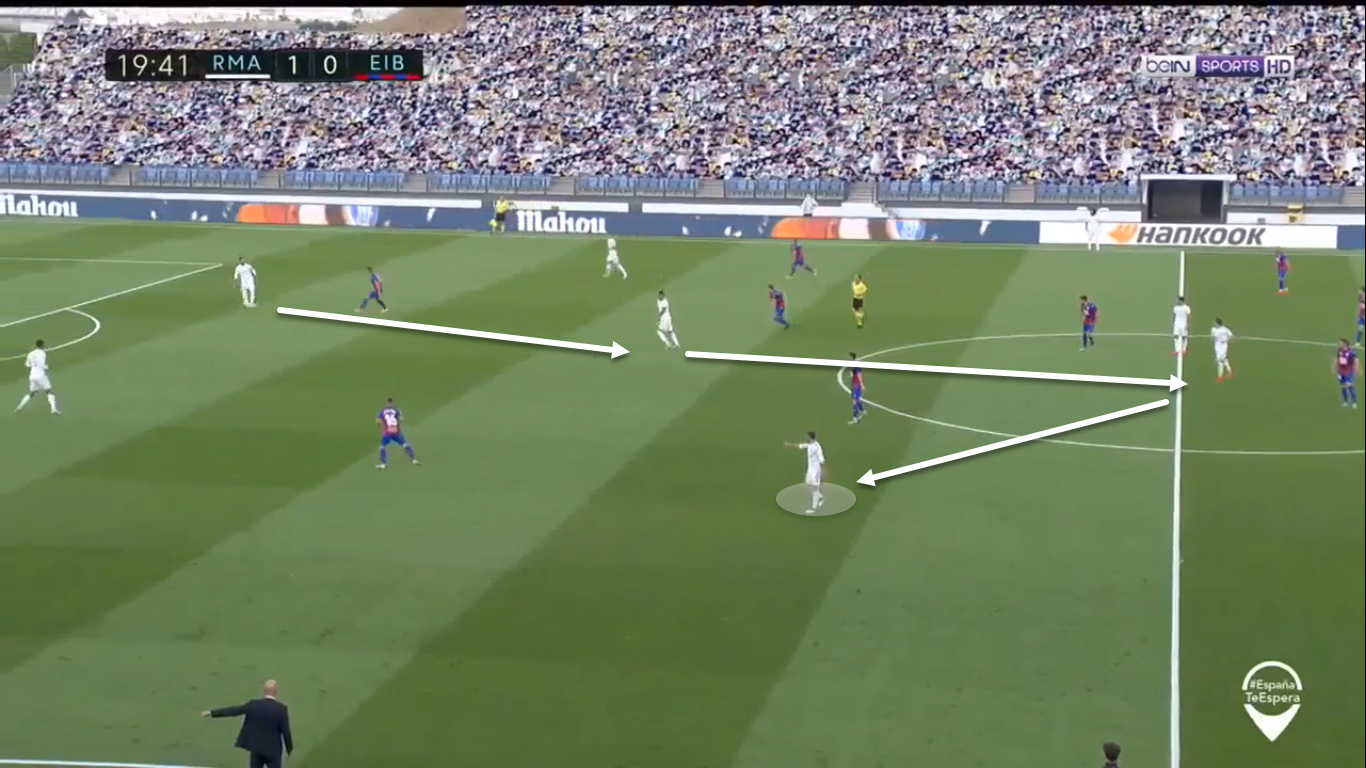 Another important aspect of Real Madrid’s play was the fluid forward line. Not only were Rodrygo and Hazard exchanging flanks often, one of the forwards would also drop deep to provide an easy passing option for the teammates while the others would adjust to cover up. Many times, Hazard would drop off and Karim Benzema would go to the left wing, as a result leaving the opposition’s center-backs free.

In this run of play, Real Madrid were facing troubles in progressing the ball, so Hazard dropped deep from his left-wing position to offer a passing option for Carvajal. The fullback dropped with him and as Hazard receives the ball, he plays a lay-off pass to Toni Kroos. 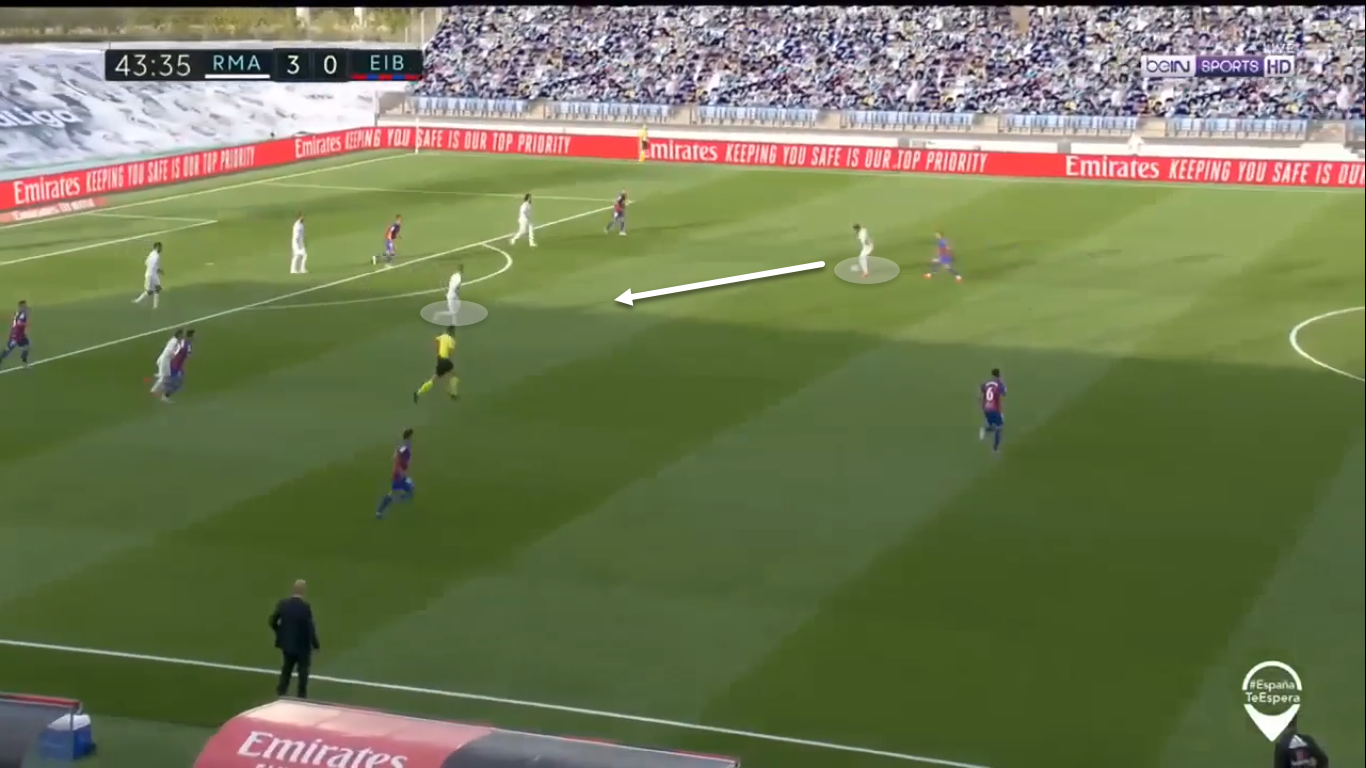 As Toni Kroos receives the ball, Hazard makes a run towards the opposition’s center-backs. Benzema on the other hand, had moved towards the left-wing to stretch the center-backs. As a result, Real Madrid were on the front foot straight away. 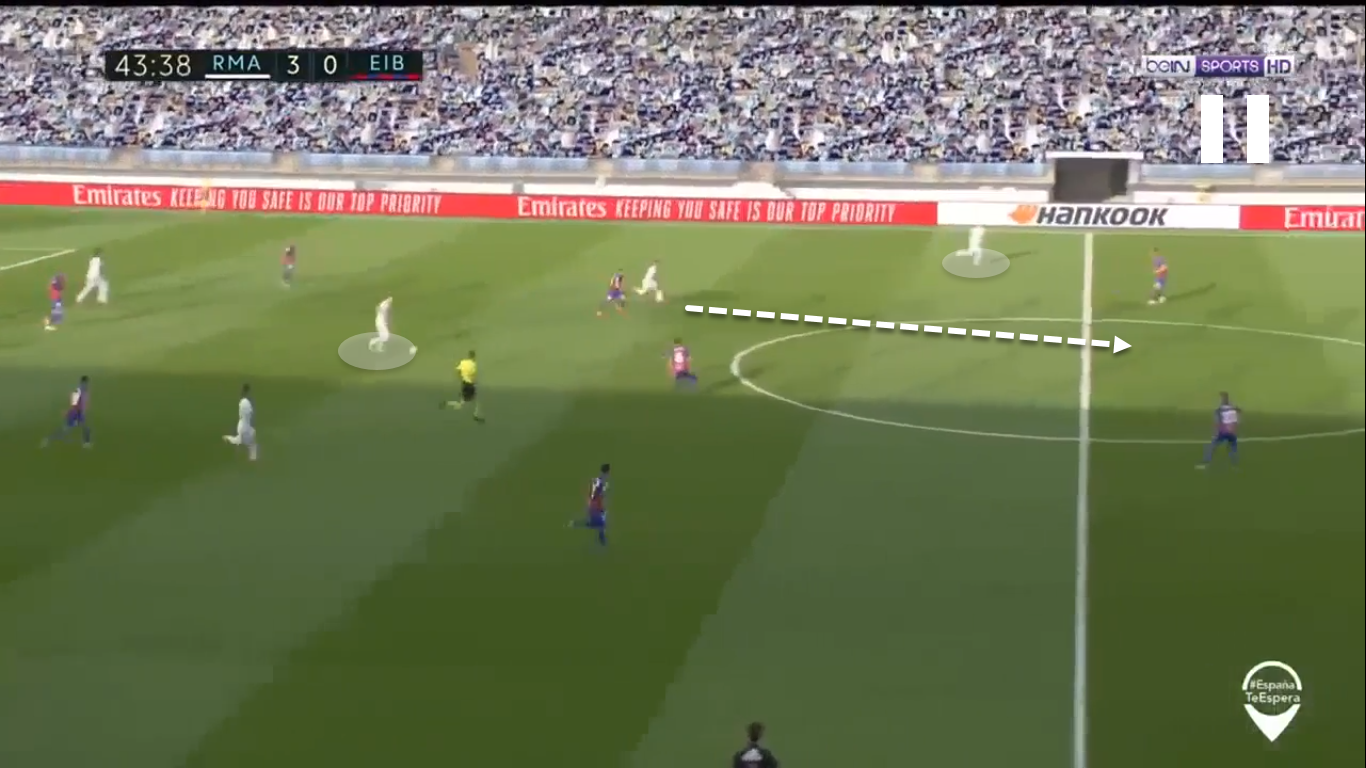 This was a common theme throughout the first half as Real Madrid tried to evade Eibar’s pressure. In this other sequence, Hazard drops deep again and Benzema moves to the left flank and a similar combination play is seen between Hazard and Casemiro. 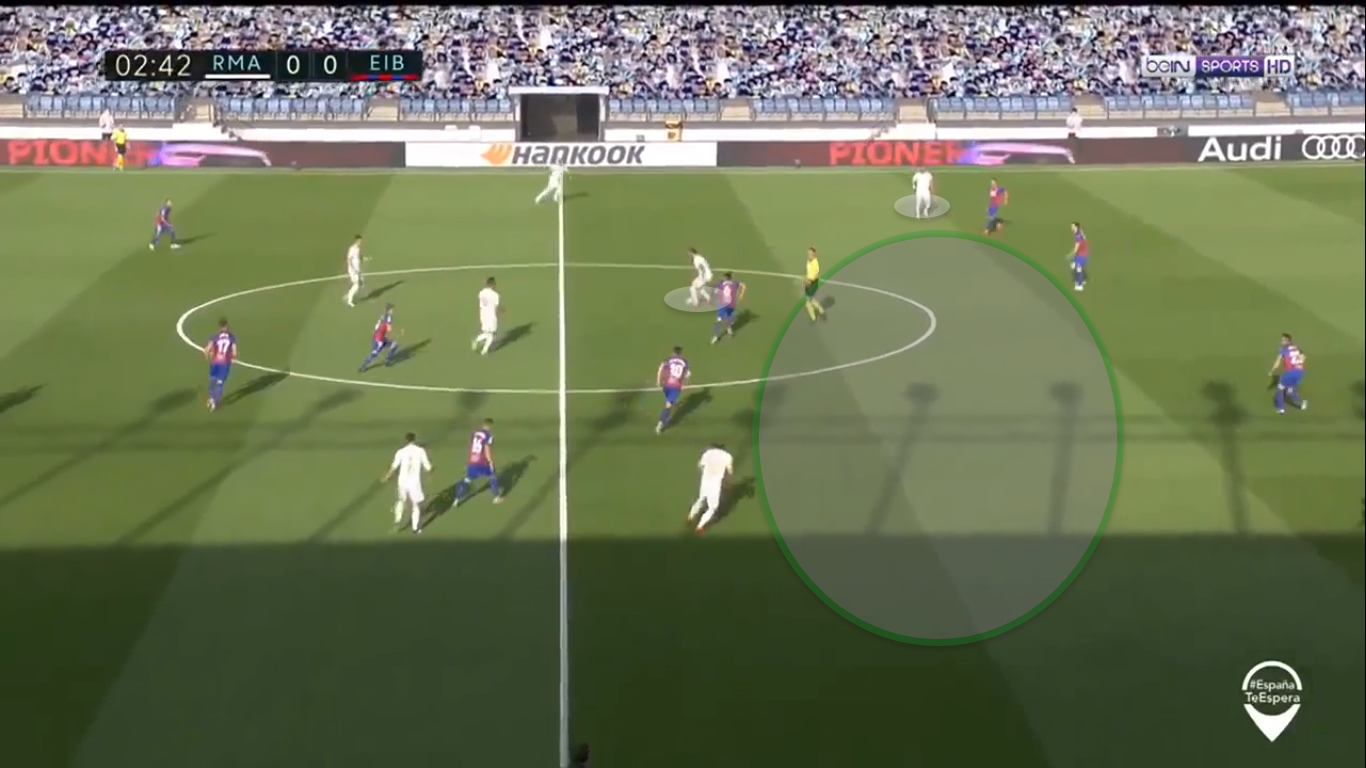 Real Madrid has the third highest attempted crosses in La Liga this season (631) at an average of over 22 crosses per game. However, in this game they used a different approach. Instead of using overloads on the flanks to break down the opposition’s defence, they used combination play and runs from deep to get beyond their opponents.

There was more verticality in this game from Real Madrid than usual, as Real only attempted 9 crosses throughout the match and their fullbacks weren’t actively involved throughout the game.

Although Marcelo made some runs into the box, Carvajal played the role of an inverted fullback in order to protect Madrid’s defensive stability. In fact, the Spaniard didn’t put in a single cross throughout the game.

After scoring an early goal and taking a 3-0 lead within the first half, Madrid eased off and consolidated pressure, as seen below in the average player positioning.

Eibar on the Ball

Eibar played in a 4-1-4-1 formation and they wanted to take the game to Real Madrid. Their game plan in this game was simple, yet effective. They pressed Real Madrid high and stopped their midfielders from controlling possession through the middle of the park and pushed Real Madrid wide.

When they gained possession of the ball, they attacked Real Madrid through the flanks and delivered crosses into the box and capitalized on the set-pieces. As a result, most of the game was played on the flanks, as seen below.

Eibar struggled to build out from the back with short passing, and would often boot it long to their strikers. But here in lies Eibar’s biggest strength; they have strong forwards capable of winning aerial duels and second balls.

As the ball is sent long, Carvajal wins the aerial duel against Pablo de Blasis, but the second ball is won by Fabián Orellana who straight away launches into an attack. 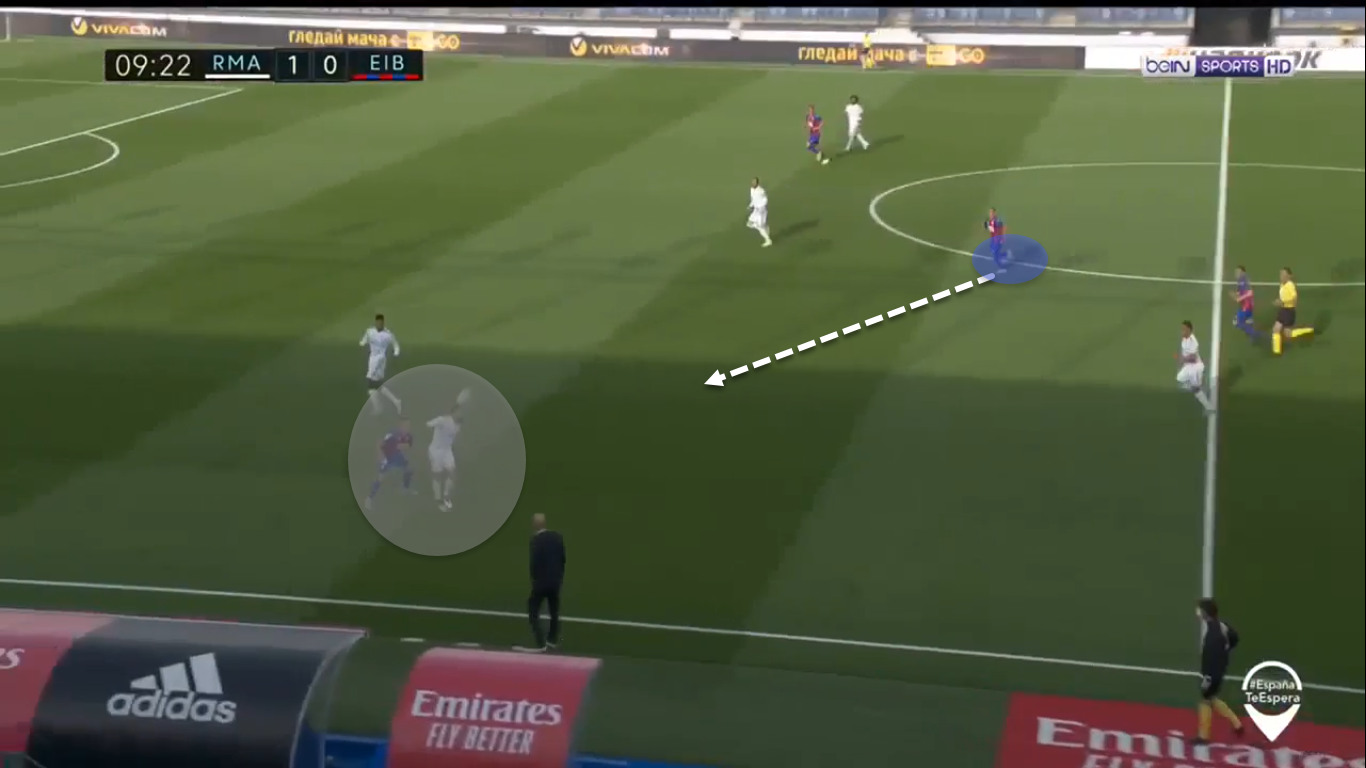 This was a continued theme throughout the game. On another instance, Eibar couldn’t find a forward pass so they played the ball to Marko Dmitrović who sent the ball long.

Although Casemiro won the aerial duel against Kike, Cristóforo was in the perfect position to win the second ball. 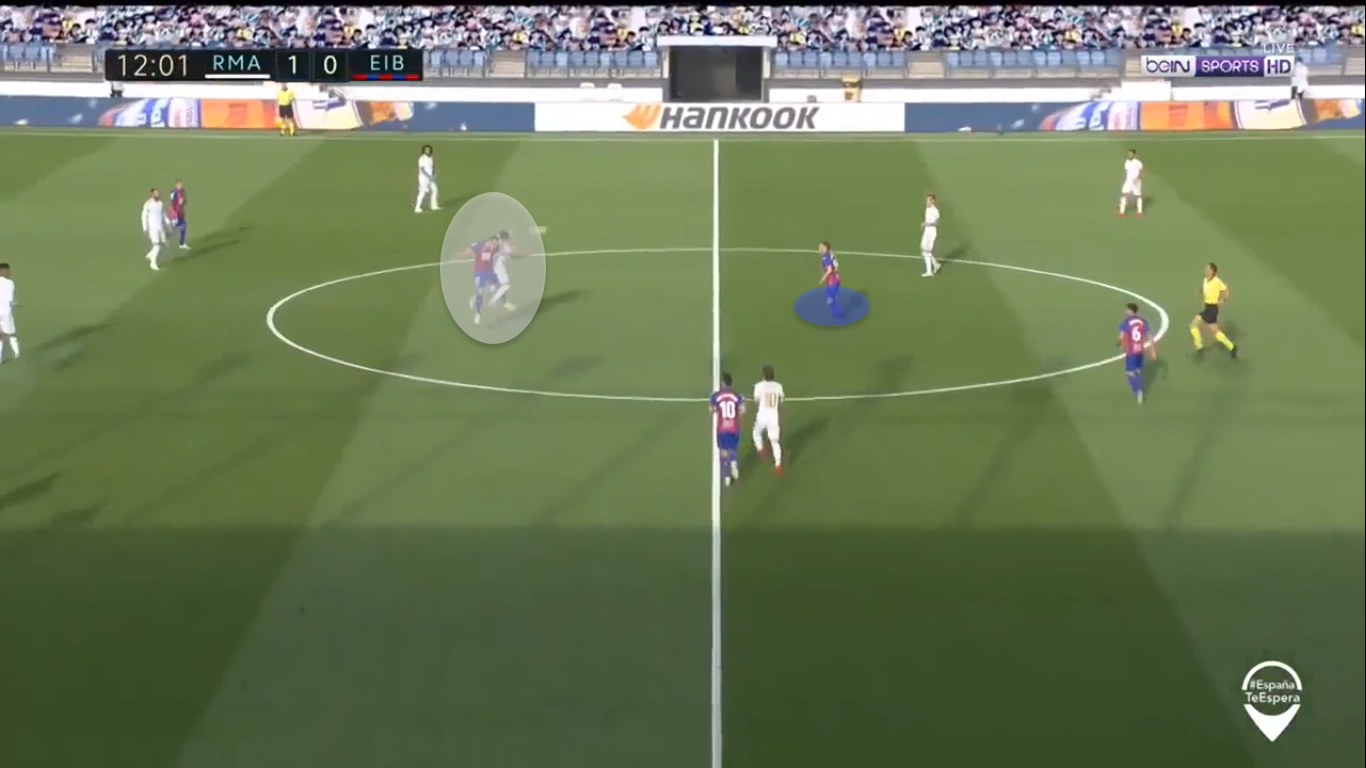 Eibar also used balls into their forward line to release the pressure. As Real Madrid pressed high on the Eibar defence, it opened up spaces through the middle of the park. On the odd occasions, the forward would drop deep and help in the progression of the ball.

In the following instance, Anaitz Arbilla is on the ball and Orellana drops deep. Arbilla plays the pass into Orellana who lays the ball off to Cristóforo. Just like Real Madrid, Eibar also used the third-man passing. 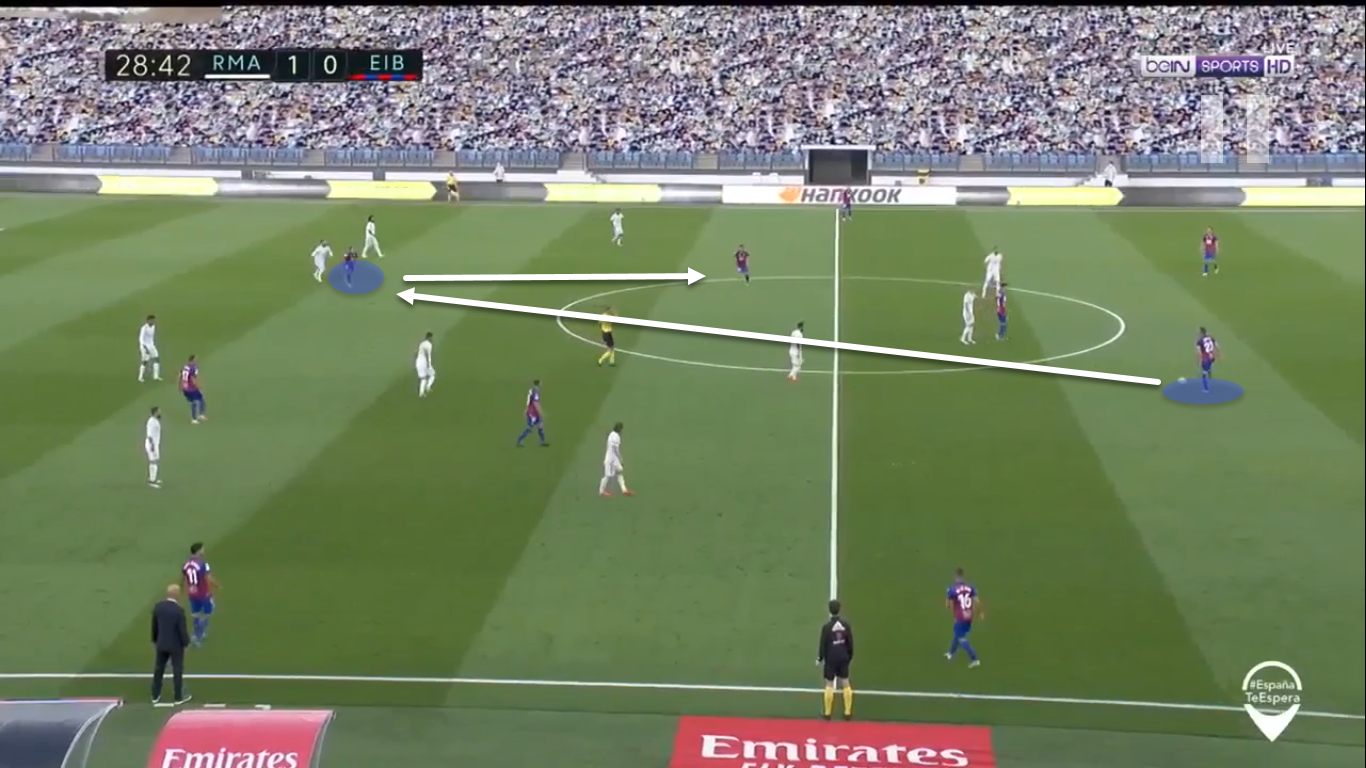 Another important aspect of Eibar’s attacking was winning possession in the midfield. As Eibar themselves couldn’t create much, they’d try to catch Real Madrid on the counter attacks, and try to create opportunities through the flanks.

Here, Casemiro is on the ball and he plays a pass into Marcelo. However, Rober Correa intercepts that pass. 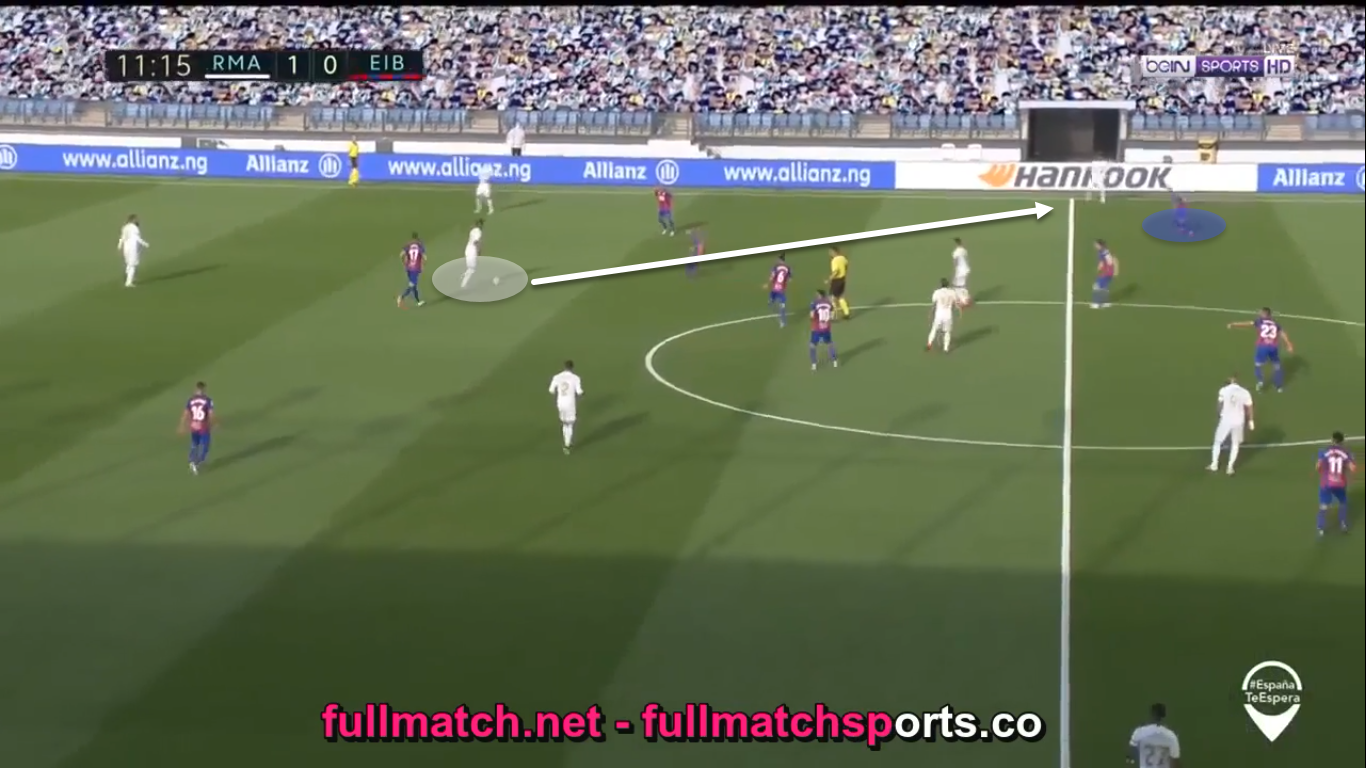 As soon as Eibar win the ball, they launch an attack using their fullback, ball-sided winger and attacking midfielder. As Marcelo was still recovering, Eibar had a 3 v 2 against Real Madrid on the wing and Cristóforo ended up taking a shot on goal. 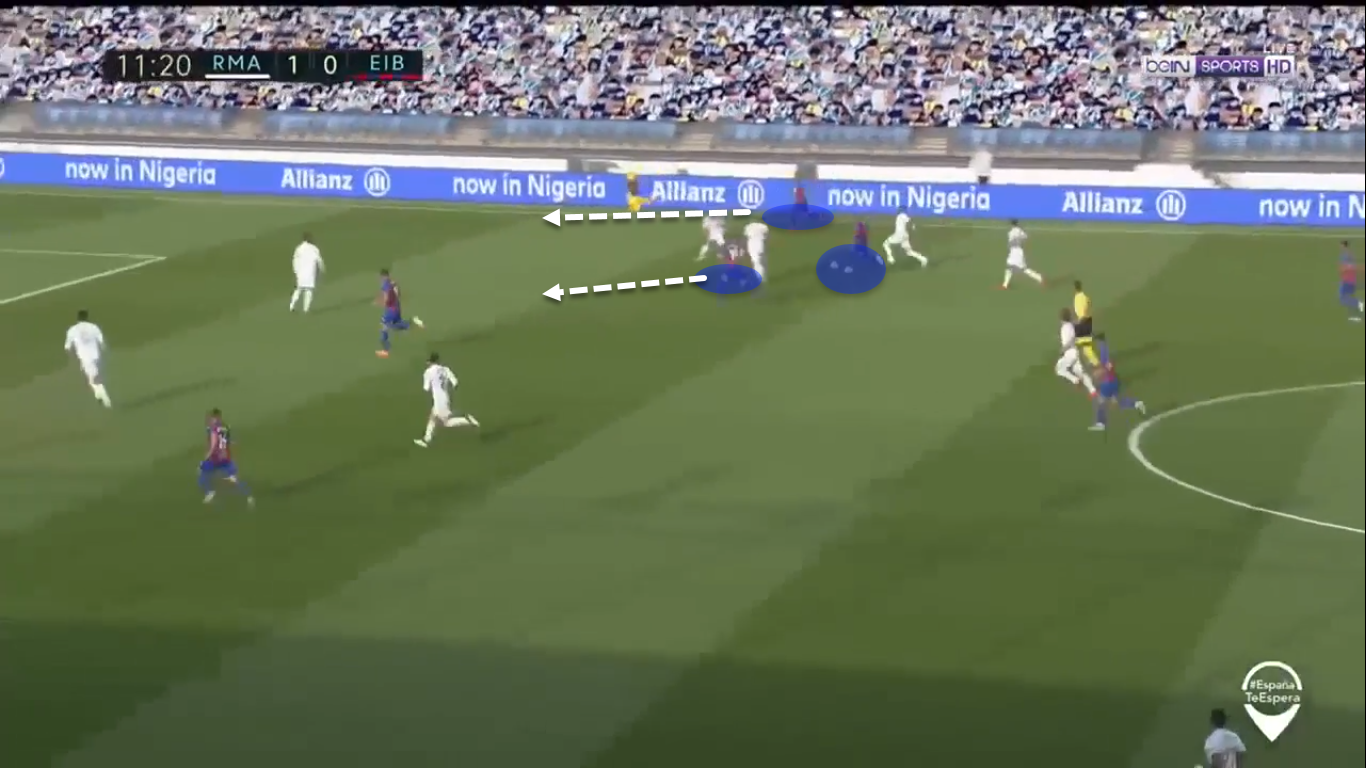 However, Real Madrid tackled this threat well as they’d overload the ball-sided flank in order to prevent progression when Eibar had a controlled possession of the ball. As a result, although Eibar enjoyed a lot of possession, they weren’t able to use much of it productively.

In this example, Real Madrid use their ball-sided fullback, center-back, winger and midfielder to create an overload on their left flank. As a result, Eibar is forced into playing the back-pass. 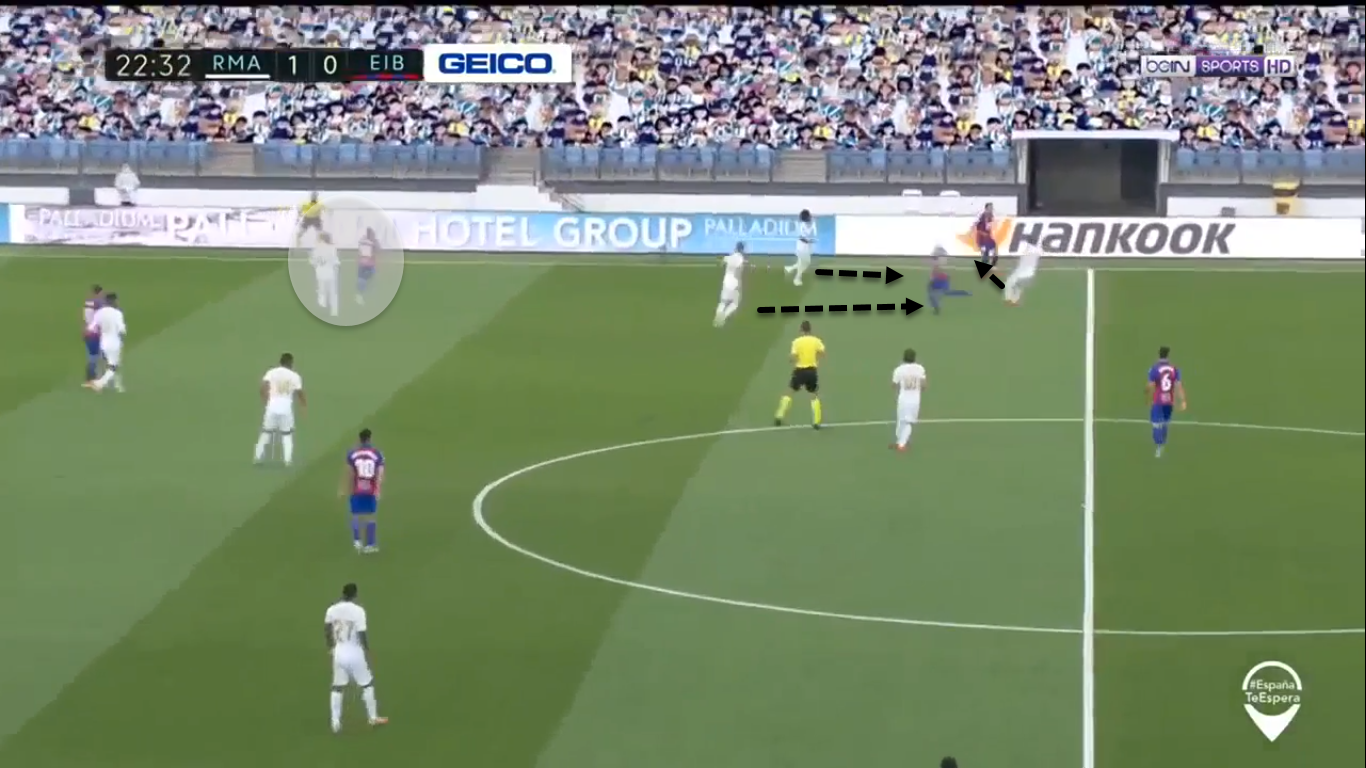 Eibar’s only real threat in this game came through winning duels and set-pieces. They had a total of nine shots but five of them came from open-play, all of which came from outside the 18-yard box. As a result, Eibar enjoyed a decent amount of possession but didn’t create threatening chances from open play.

Football came back after 14 weeks in Spain and as expected, players were not at their best. Real Madrid lost the possession of the ball 137 times and Eibar topped that by losing the ball 147 times. Throughout the game, players attempted several ambitious passes that went wide of the mark.

Here, Thibaut Courtois tried to send the ball long, but it ended up at De Blasis’s feet inside his own box and Edu Expósito ended up taking the shot which was saved by Courtois. 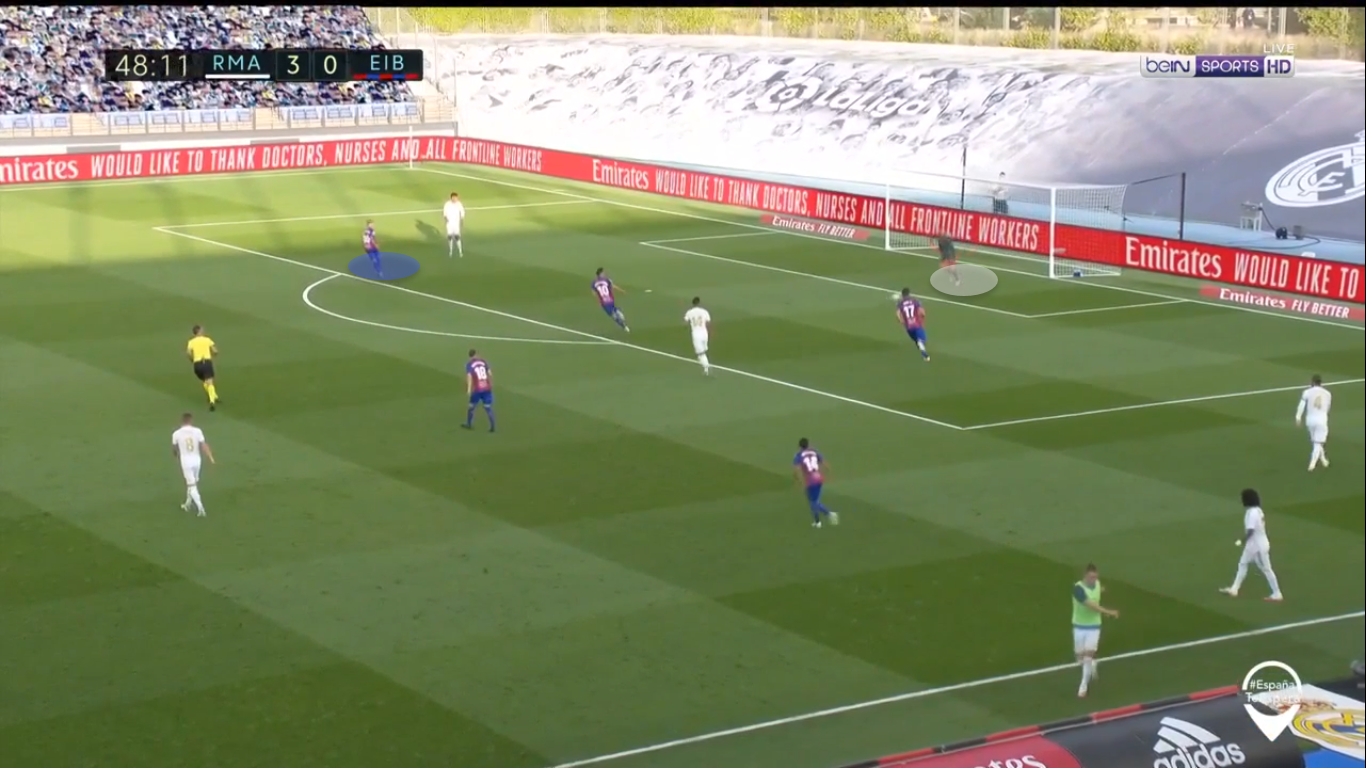 On another instance, Real Madrid had an opportunity to launch a counter-attack, Kroos was on the ball and Rodrygo was making a brilliant unmarked run beyond the defence. Kroos just had to play a simple pass into Rodrygo’s path but he ended up playing a long-ball straight into the goalkeeper. 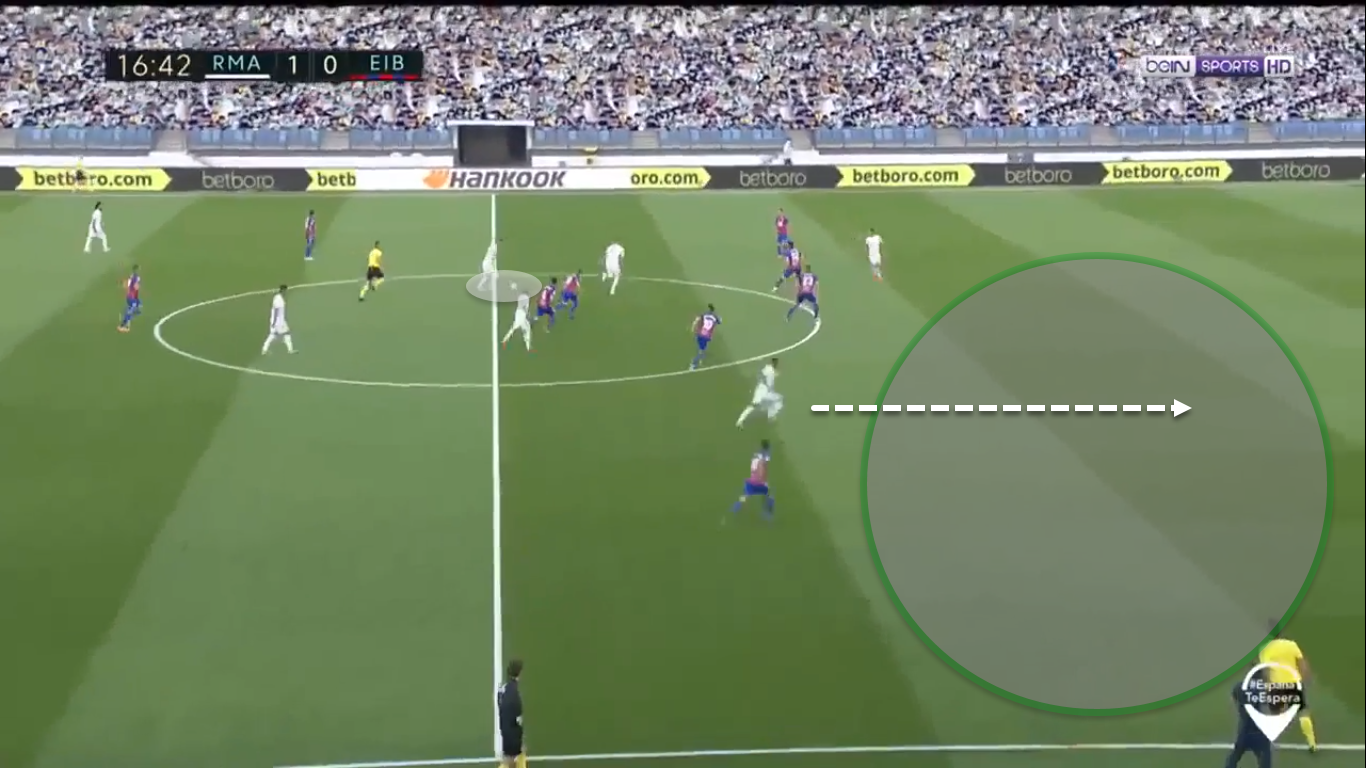 As well as Madrid, Eibar suffered similar problems in possession throughout the game. In this sequence of play, Arbilla tried to play a long ball into Orellana’s path who was making a run down the right flank. However, Arbilla horribly over-hit his pass and it went out for a goal-kick. 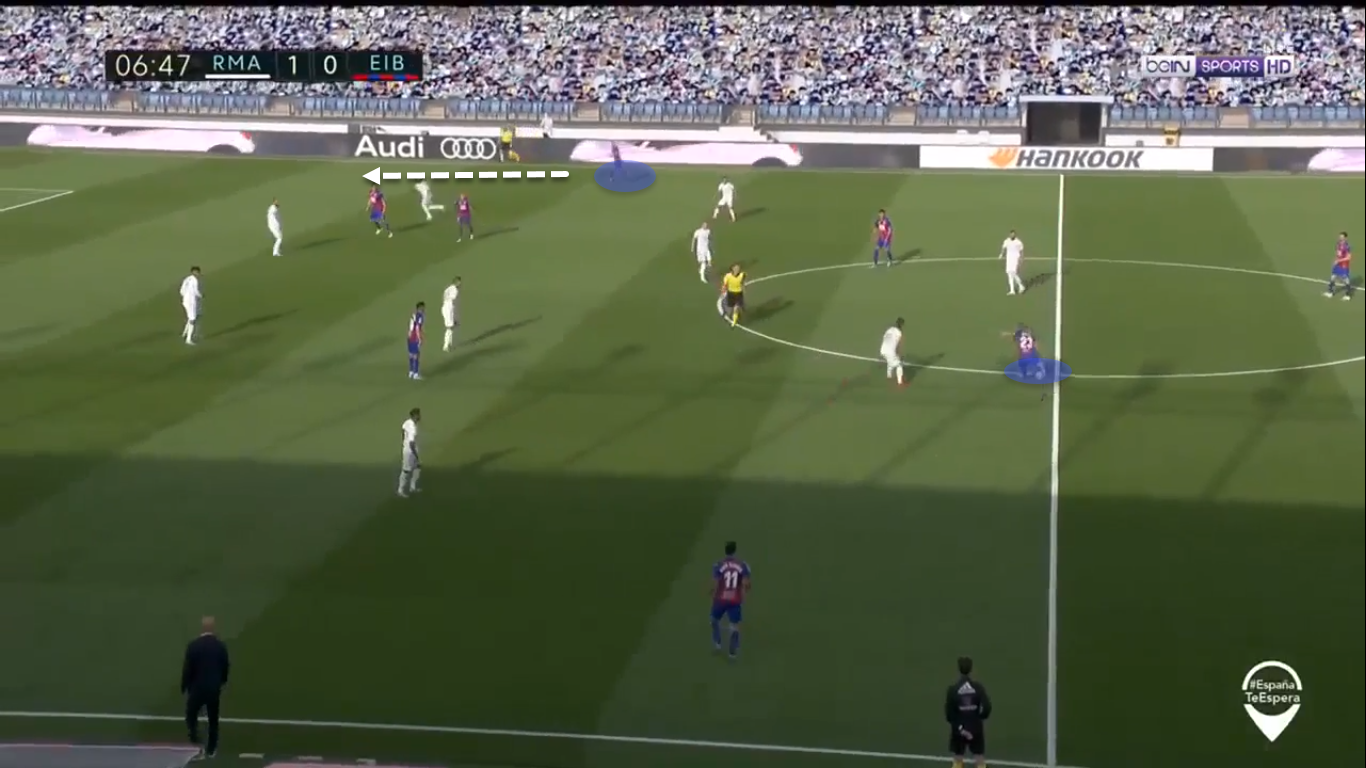 For the first goal, Hazard had dropped off and Benzema moved to the left-wing position. Hazard made a back-pass to Casemiro who played a first-time ball into Benzema’s path (who was just barely onside). 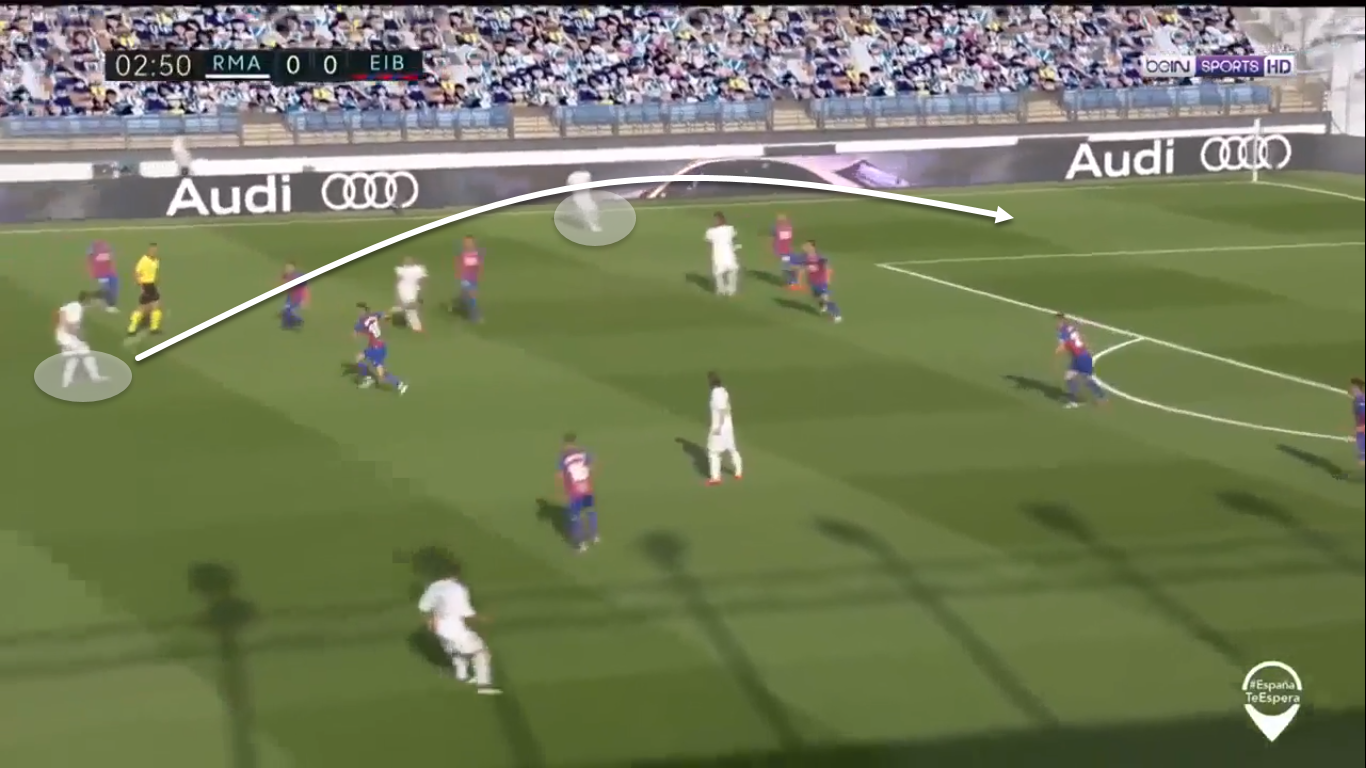 Benzema ran into traffic and was crowded out by Rober Correa, Cristóforo and Sergio Álvarez. Finally, Álvarez made a clearance but it only reached Kroos who was waiting at the edge of the box whilst unmarked. Kroos made a brilliant first-time pass and placed it perfectly into the top-right corner of the goal. 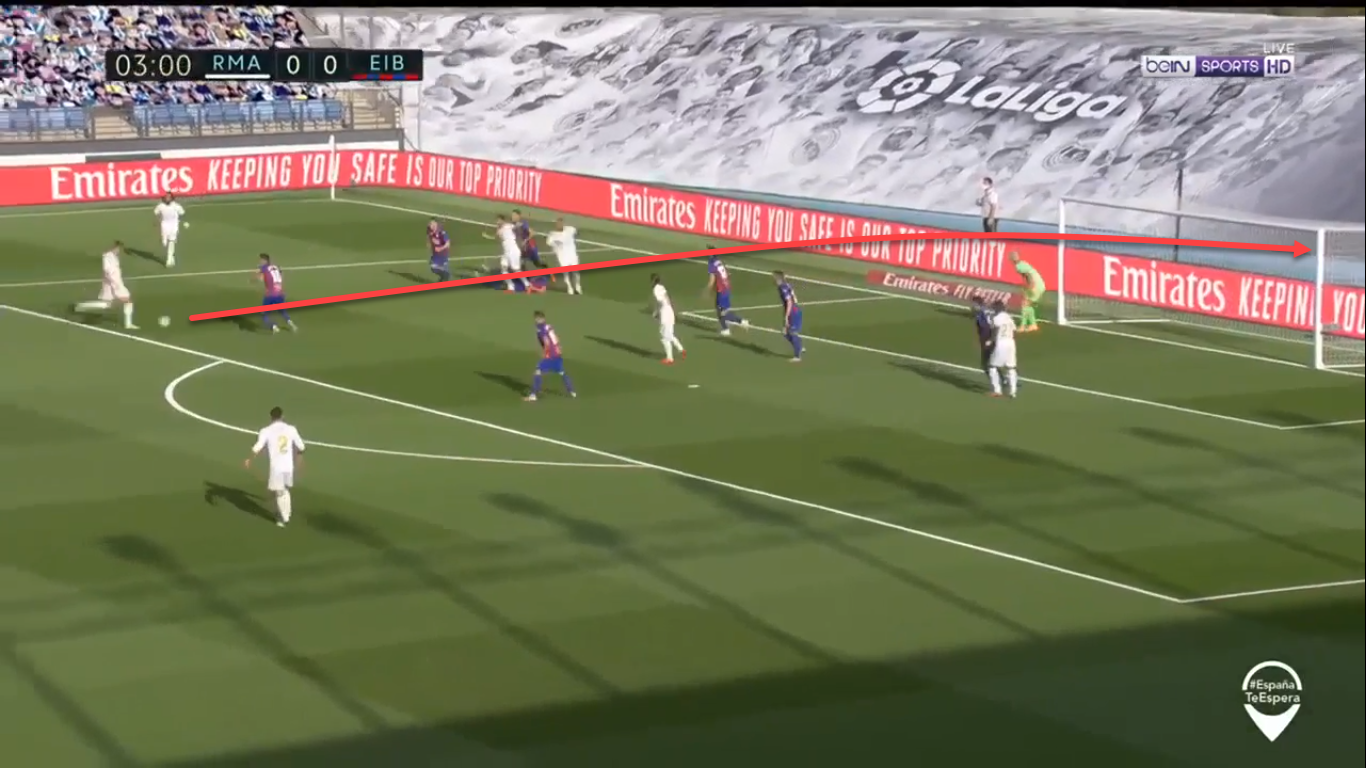 For the second goal, Arbilla played a ball into Kike but Ramos was quick to anticipate it and ended up intercepting the pass. 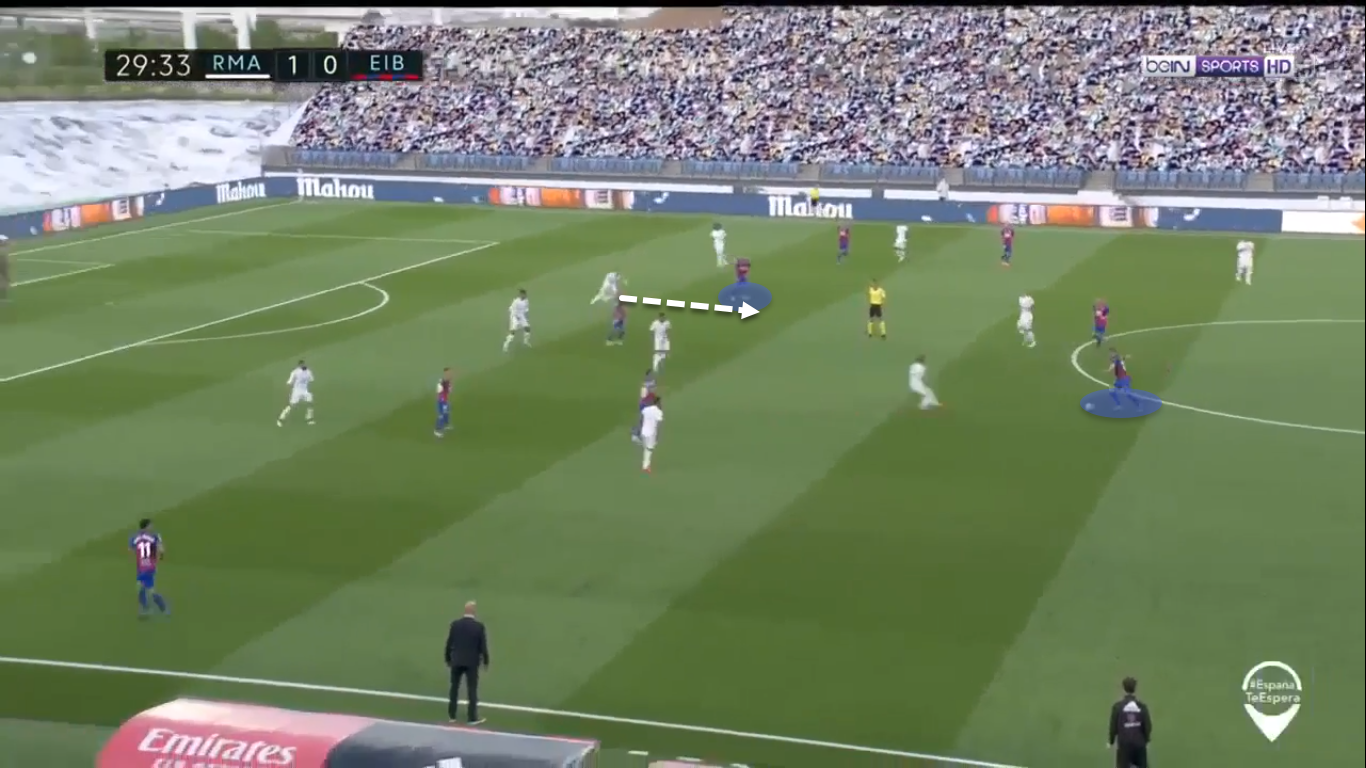 Ramos continued his run and played a ball into Benzema, who was hanging on the left flank. Just with this one act, Real Madrid had left 6 men behind the ball and attacked the box with a 4 v 4. Benzema played a pass into Hazard.

Thanks to Ramos’ run into the box, Hazard was unmarked. When the ball reached Hazard, Ramos was left free. This saw Hazard and Ramos combining in a 2 v 1 against the keeper. Hazard squared the ball to Ramos and he scored first-time. 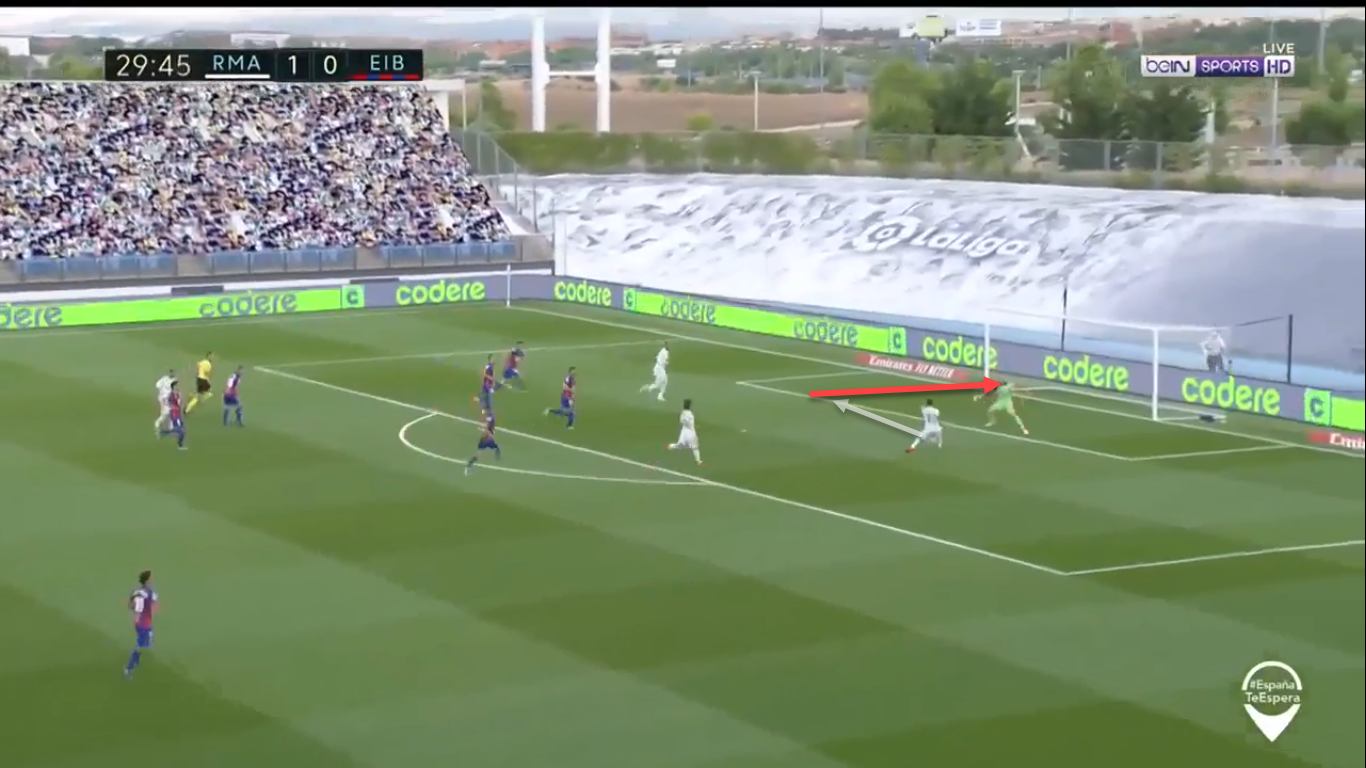 For the third, Carvajal tried to initiate a counter-attack but he was held back and Eibar had players back, so he played a pass into Hazard. Benzema took the position between the center-back and the fullback, whilst Hazard continued his run.

Benzema played Hazard in, and his pass took three defenders out of the equation. Hazard took a shot, which was saved but the ball went loose around the penalty spot. 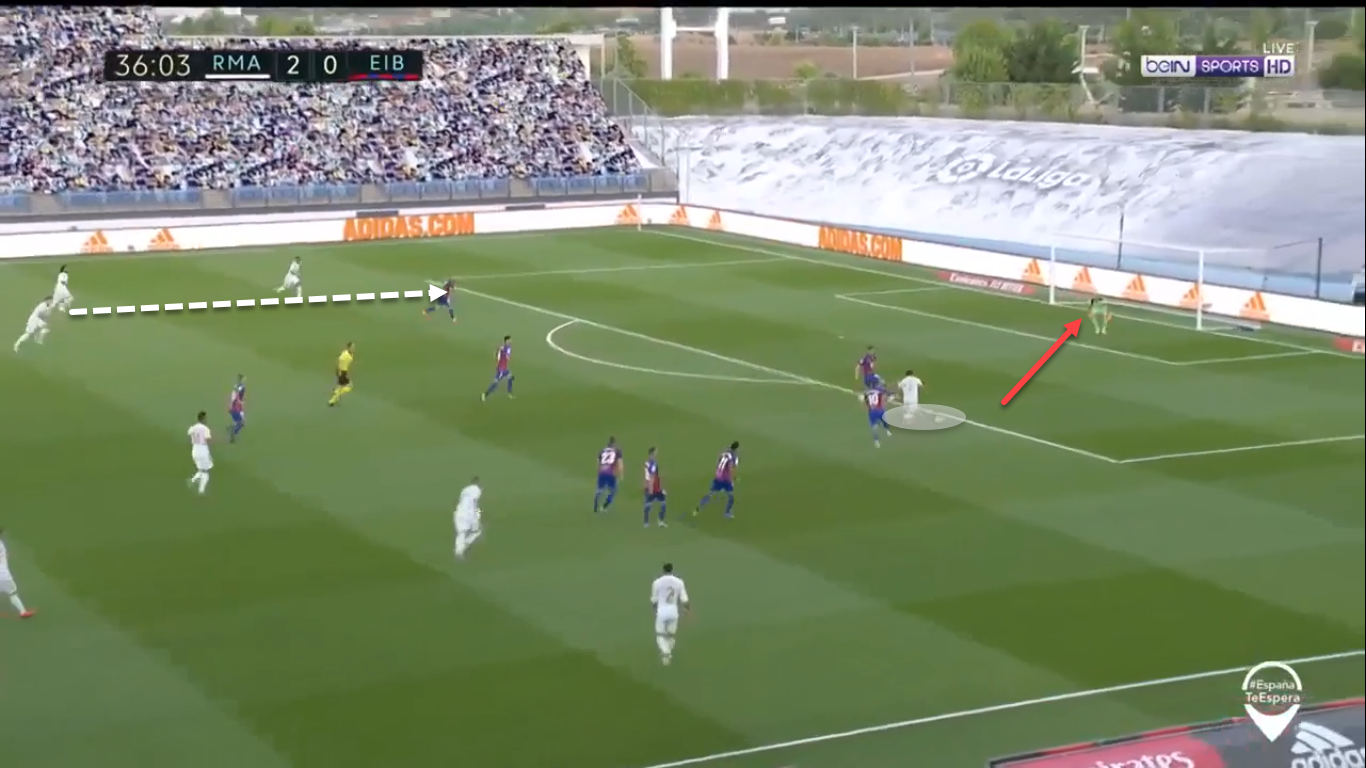 Álvarez cleared the ball but it only reached Marcelo, who had continued his run into the box. Marcelo made a sweet connection with the ball and the ball reached the bottom right corner of the net. 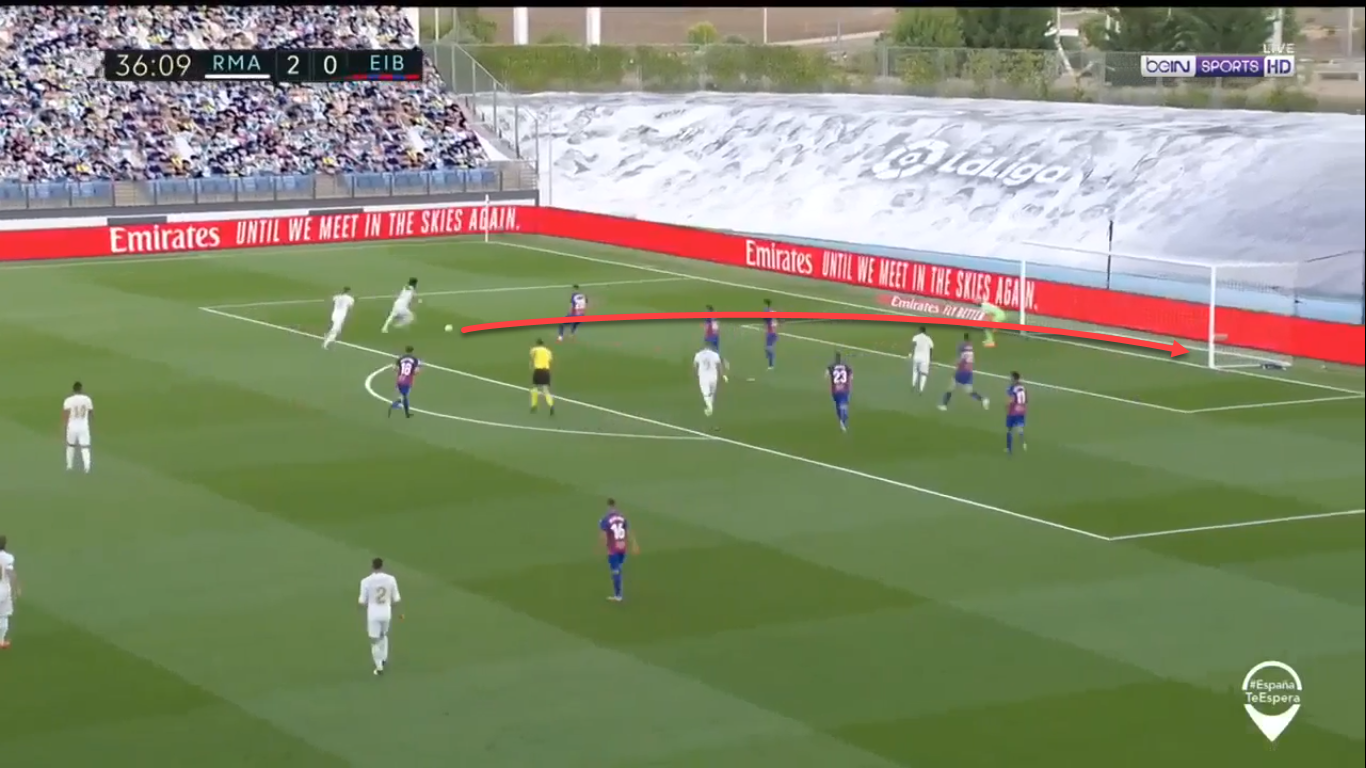 For Eibar’s consolation goal, Pedro León’s corner kick was half-cleared by Benzema, and the ball reached the edge of the box. De Blasis made a move towards the ball and took a shot, but it took a wicked deflection off Pedro Bigas (who was just onside) and crept under Courtois’ legs. 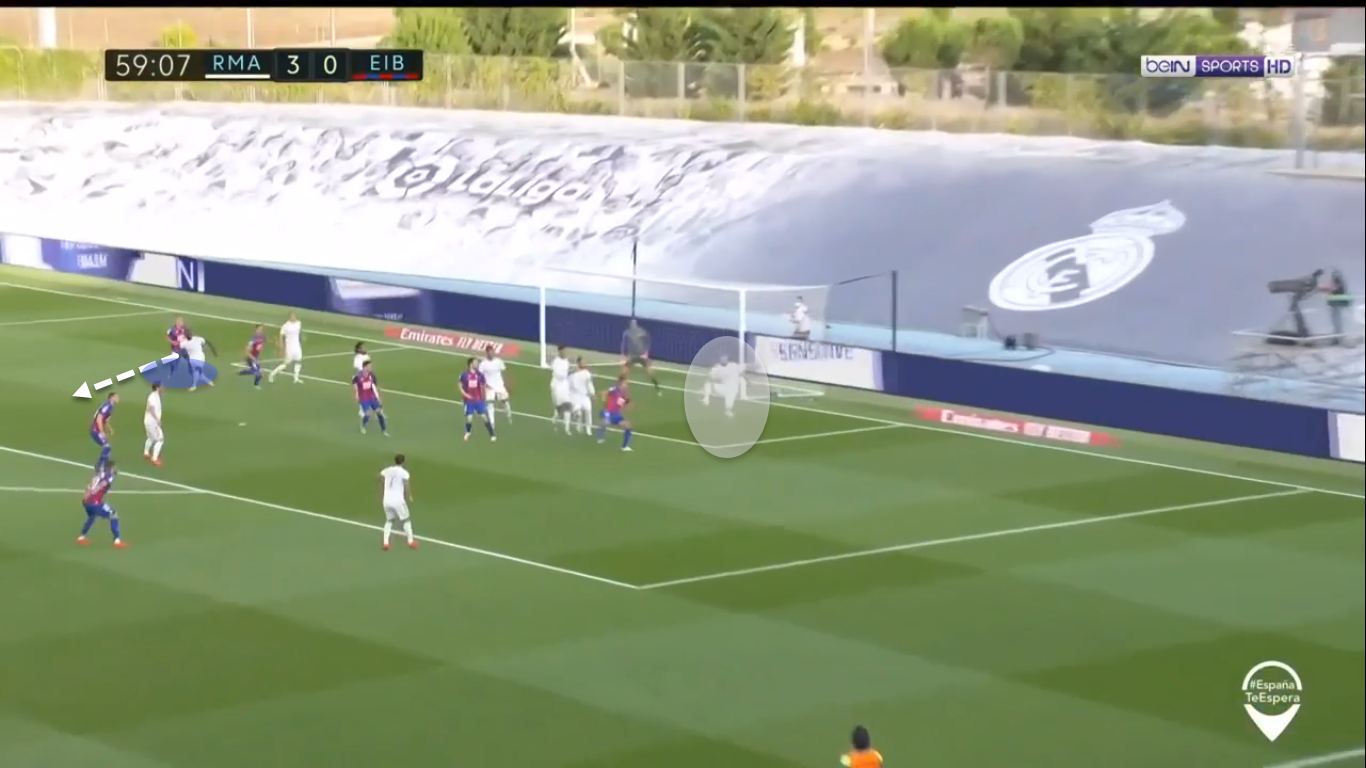 Real Madrid’s first game after the break ended in a 3-1 victory, as Zidane’s men won the first of their “eleven finals”. The game was filled with moments of individual brilliance and some really messy goals. However, on another day, this game could’ve finished as a 0-0 draw.