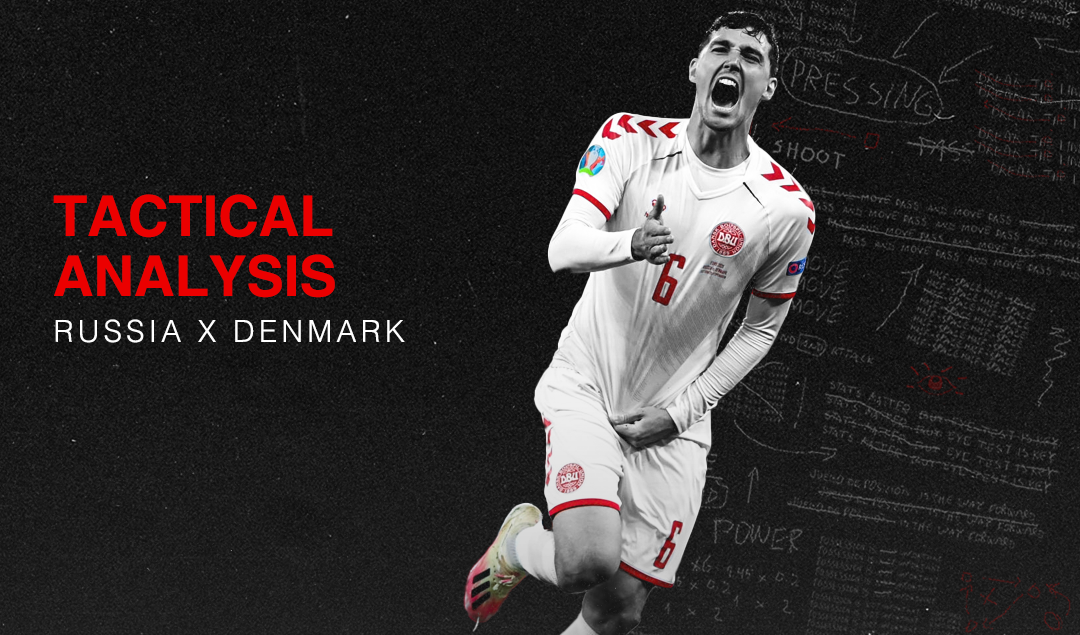 It was no goal or assist which garnered the greatest cheers, but the confirmation of another game’s end, as Copenhagen’s Parken Stadium erupted upon the completion of Finland’s bout with Belgium, which unfolded over 1.5k kilometres away. In fact, it was affairs off the pitch which often took precedent for the fans, over the Danish masterclass unfolding in front of their eyes, as many of them tracked the Finnish score on their scores app of choice.

Denmark’s most junior player was the one to break the deadlock, as Mikkel Damsgaard struck the ball from a distance, the 20-year-old putting past the equally young Matfey Safonov in the Russian goal. If Denmark’s first was an exercise in talent and skill, their second was the opposite; Denmark was gifted an open avenue to the net as Roman Zobnin’s misplaced pass left Russia exposed and Yussuf Poulsen wide-eyed. Russia managed to pull one back despite impassioned claims from Kasper Schmeichel and co that the spot-kick was undeserved.

Russia’s attempt to get back into the game was faint at best and lasted just 10 minutes as, despite the attempts of Safonov, Andreas Christensen nearly burst the net with a first time finish from outside the box, which somehow evaded a packed box. The ever-present force of Joakim Mæhle added Denmark’s fourth and capped off a performance that was no doubt fueled and dedicated to Denmark’s absent talisman, Christian Eriksen.

Man of the Match: Pierre-Emile Højbjerg

At club level Pierre-Emile Højbjerg is most often lauded for his ability to play an honest game; however, tonight, we saw the apex version of the Danish midfielder as he mixed power and prowess to send Denmark to the knockouts. Højbjerg managed to pick up where sadly, Eriksen was forced to stop, as the current Tottenham midfielder navigated defenders and played passes reminiscent of his former club teammate. 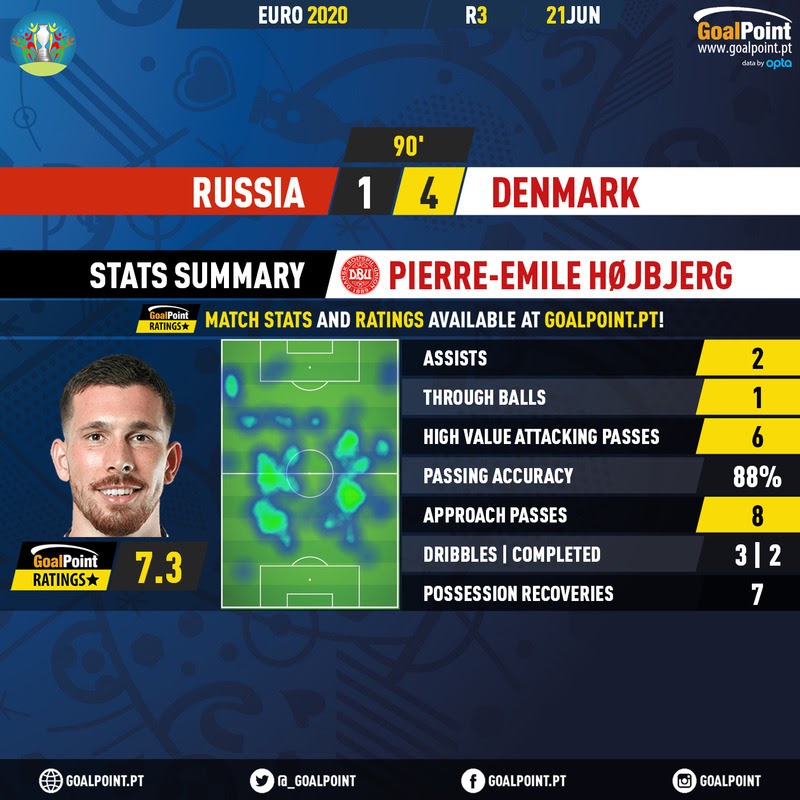 Denmark’s midfield maestro lit up and enthused Copenhagen crowd with another top-class performance.

Though not the scorer of any goals Højbjerg was the last point of contact for two goals before they were buried into the net as he set up both Mikel Daamsgard’s opening goal and Mæhle’s. Beyond just the goals, Højbjerg provided a vital link brokering communication between defence and attack, as seen in the heatmap above.

This wasn’t his first performance of note as this summer’s competition; however, this was undoubtedly his best so far. Denmark will rely on the exploits of the warrior-like Højbjerg to drag them further in this tournament, which may be further than most think if he can replicate today’s performance.

As Denmark’s squad prepares themselves for the battles of knockout football, Russia’s squad will be scattered around the globe as they recharge their batteries for the upcoming season in places like Thailand or Turkey. Beyond the immediate repercussions, many questions will be asked regarding the appropriateness of Stanislav Cherchesov staying at the helm; however, these are questions for another day; today is Denmark’s day.

The happenings in Denmark’s first game in this tournament will not be quickly forgotten and the blistering start the Danes made in their second game against Belgium seemed to draw its strength directly from those events. In this final group encounter however, they had another pressing source of motivation; imminent elimination. It was not surprising then, to see Denmark roar to another fast start against Russia, in search of goals and a win they desperately needed.

In those early moments, the speed of their start seemed to catch the Russians by surprise. Denmark was able to progress the ball regularly into dangerous wide areas and get bodies in the box to attack the crosses that arrived into the area thereafter. They could not translate that momentum into any clear-cut chances and Russia began to take a foothold in the game. Once that happened, Denmark started showing an inability to move the ball into the right areas consistently.

They attempted to build up with their three centrebacks, keeping the wing-backs, Joakim Mæhle and Daniel Wass, high and wide and positioning the midfield pivot behind the first line of Russian pressure. When the Russians sat in a midblock – not giving up too much space in behind and not sitting too close to their goal – Jannik Vestergaard or Andreas Christensen attempted to carry the ball forward and draw opposition players out of position in order to move the ball on towards the more creative players, in between the lines. 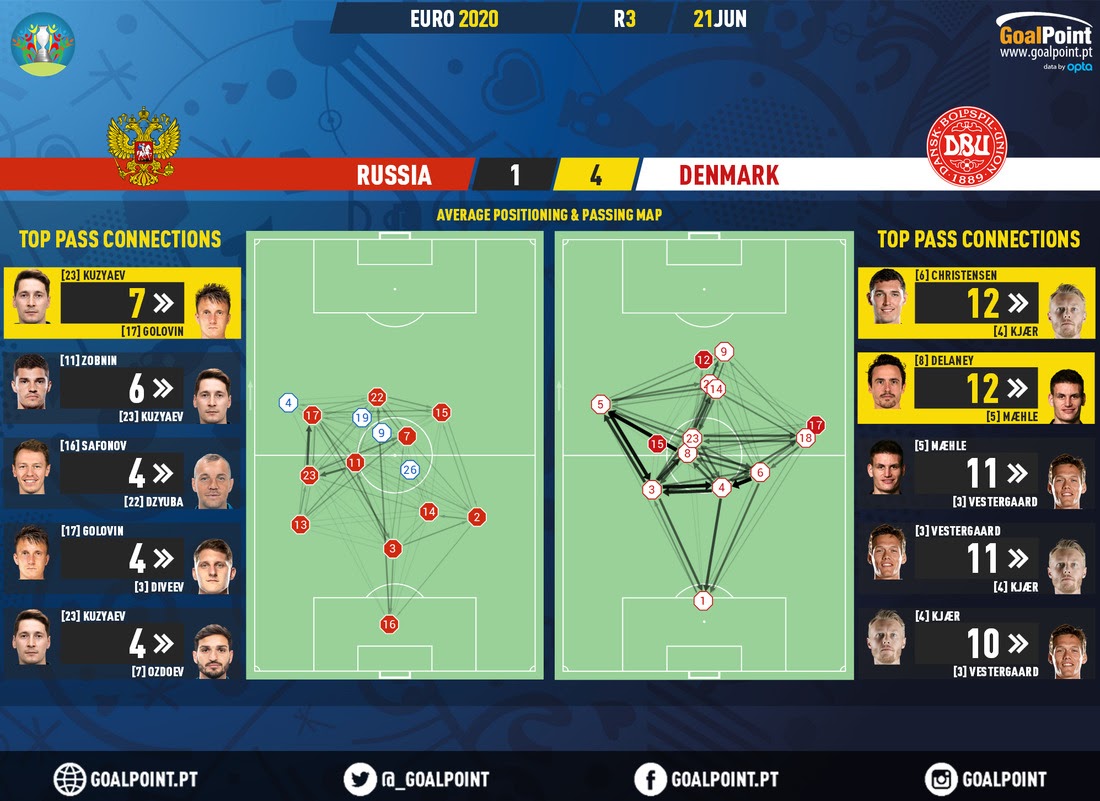 As seen by the average positions and passing map, Joakim Mæhle was constantly given license to push forward and find the likes of Yussuf Poulsen and Mikkel Damsgaard in attack.

Russia did very well to crowd out Danish players when they attempted to carry the ball forward and that greatly reduced the threat from such an approach. The wide areas were not as profitable as they were in the early stages. Mário Fernandes and Georgi Dzhikiya were resolute against the combinations of Maehle and Damsgaard preventing them from making progress down the Danes’ left which was their main avenue of attack throughout the game.

Adding to the issues Denmark were having trying to create positive offensive situations, they began to turnover the ball in very dangerous areas. Aleksandr Golovin forced a good save from Kasper Schmeichel which arose from a turnover in the midfield and then a 3 on 3 breakaway for the Russians. A few more of these situations occurred and fortunately for Denmark, none of them led to a goal.

However, the situation had not improved going in the other direction for the Danes and that was an issue, since they needed a goal. One of the problems with their structure was the lack of progression from the midfield pivot. Thomas Delaney and Pierre-Emile Højbjerg are not the most expressive duo on the ball and it showed since their reluctance to take responsibility for moving the ball forward with either passes or carries asked too much of the centrebacks.

Højbjerg and Delaney needed to offer themselves as options more regularly in the first phase of buildup – when the ball is with the centrebacks or goalkeeper – and be more incisive with their passes. At any time, the Danes had about three players in behind the Russian midfield and in front of the defence, in prime position to cause some problems to the Russian backline but the ball was not reaching them in those positions often enough. 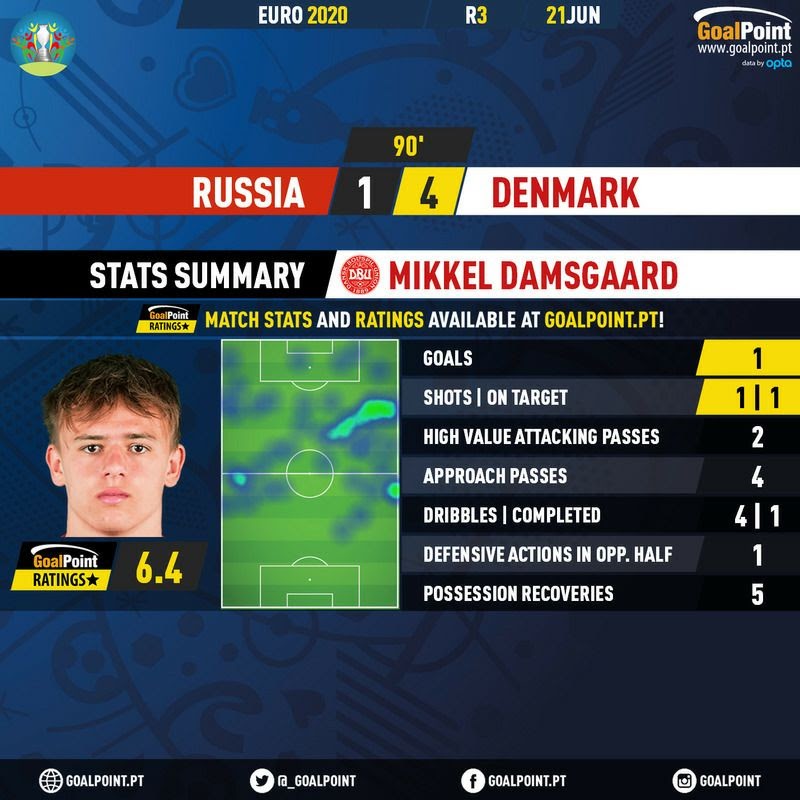 After riding the bench against Finland and coming off against Belgium in the 72nd minute, Damsgaard delivered a match-winning performance to seal Denmark’s progression into the knockout round.

It was not surprising that when the eventual breakthrough came, it was courtesy a delightfully zipped ball from midfield into the feet of Mikkel Damsgaard from Højbjerg. This pass took out two Russian players and reached the forward in the exact area he needed to be getting into. Højbjerg could have chosen the safer option of sending back to Vestergaard or even switching play to Mæhle on the opposite flank but he took the riskier path and the reward was the best they could have hoped for.

Damsgaard, who had been toiling in vain up until that point to make something happen for the Danes, was absolutely ecstatic after his shot flew into the Russian net. At only 20 years of age, he showed his quality both in that moment and at other points within the game.

His desire to drive forwards, take on players and create combinations with his teammates in dangerous areas was admirable even if his execution was not always great. He has a spark that the Danes will need to utilise more effectively in their next game, since as he showed today, he can do something special at any moment.