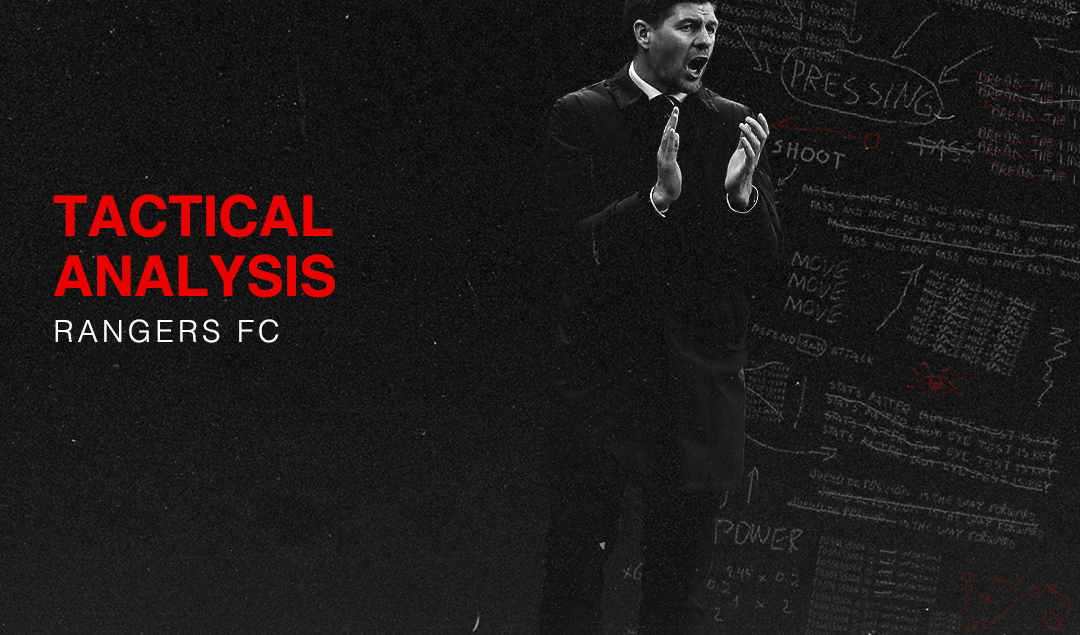 After 10 years of waiting, Rangers put an end to Celtic’s domestic dominance by winning the Scottish Premiership this season. Their 55th title, which is the most of any club in the world, was a much-awaited one as it marks the end of an arduous decade for the club. The club wrapped up the title on March 7, and while two matches still remain, they are currently undefeated in the league with 30 wins and 6 draws.

The appointment of Liverpool legend Steven Gerrard in 2018 was a move that brought along a tactical identity that they were lacking before and also an effective recruitment strategy that helped them win the title. By the 2021 campaign, the club had just four players from the 2018-19 squad and the title win shows how effective their recruitment strategy and playing style were. Let’s take a look at the tactics that brought Rangers back to the promised land. 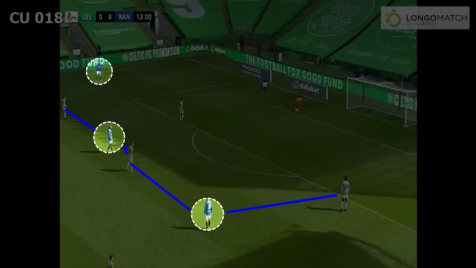 The fullbacks dropping deep also means that they cannot be pressed by the opposition full-backs as such an action would leave their defensive line vulnerable to the Rangers front three. 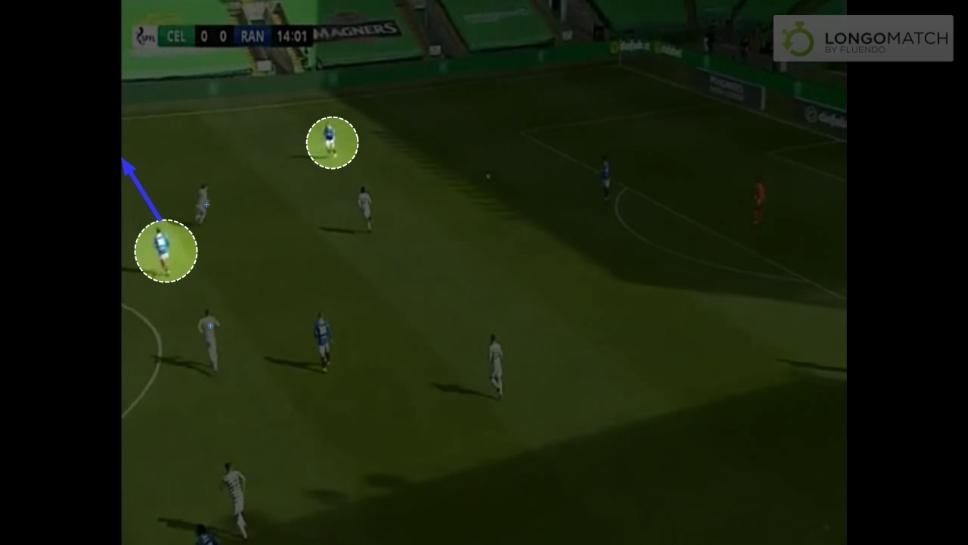 If the ball-near wide forward pushes to press the full-back, the rangers pivot finds himself an angle to receive the ball in space

Rangers mostly use a double pivot in their build-up with their left midfielder Joe Aribo taking a more attacking position on the left side of the pitch with Ryan Kent and the left wide forward shifting inside to operate in the Number 10 position. Thus their shape during build-up resembles a 4-2-3-1 shape. 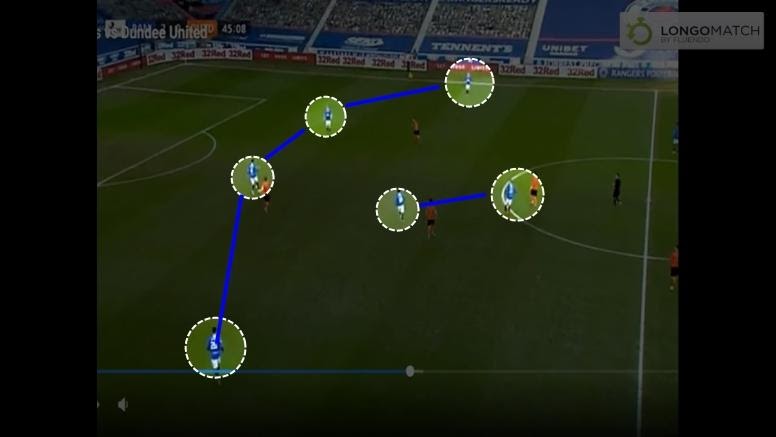 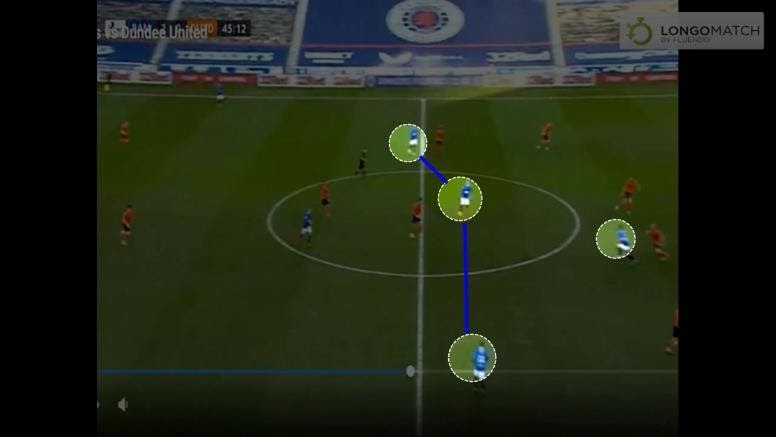 The Rangers attack made up of Alfredo Morelos, Ryan Kent and Joe Aribo is flexible and their movements have an excellent sense of positional responsibility and automatism that they almost never leave important positions or spaces vacant. 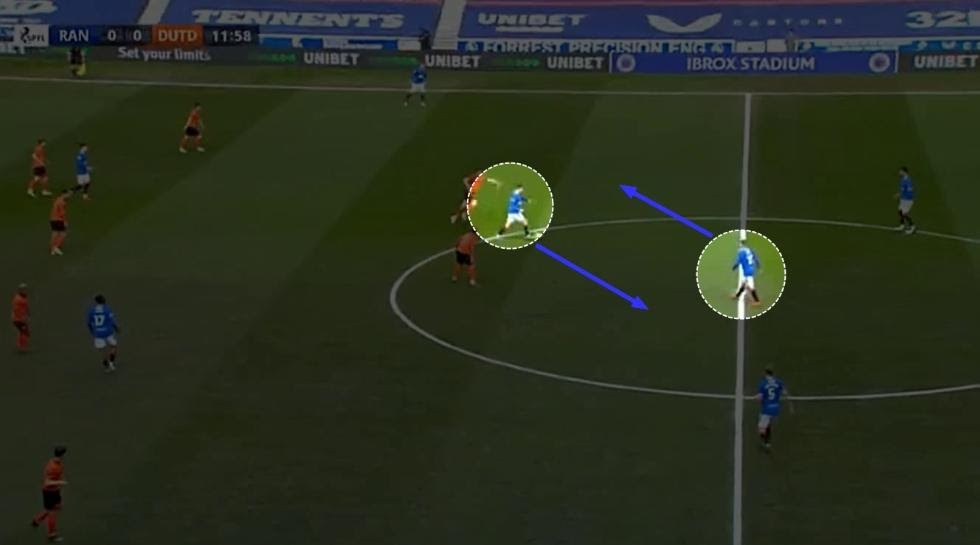 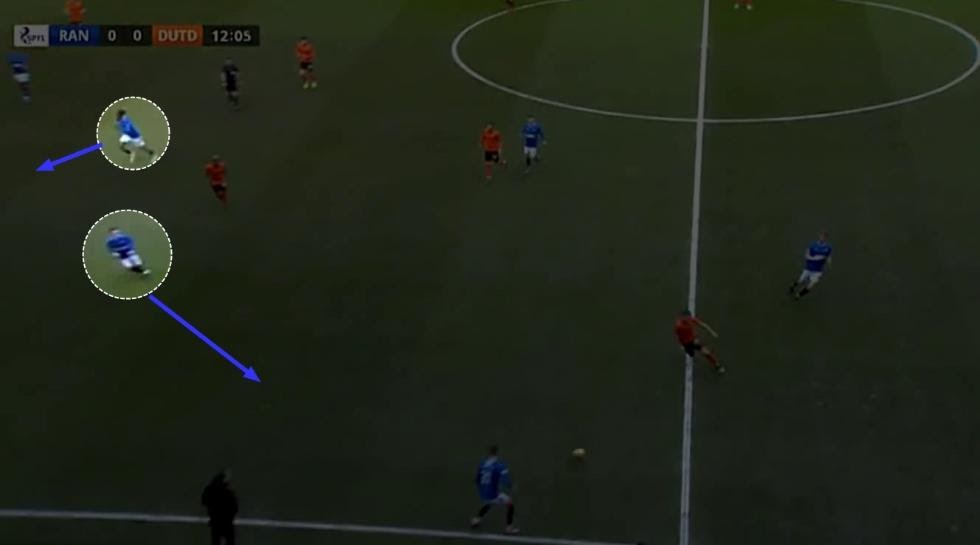 Both the pictures above are from the same situation where the Rangers interchange positions and occupy important zones. This spatial occupation and automatism not only makes their progression smooth but also creates automatic counter-movements that the opposition may find hard to defend. 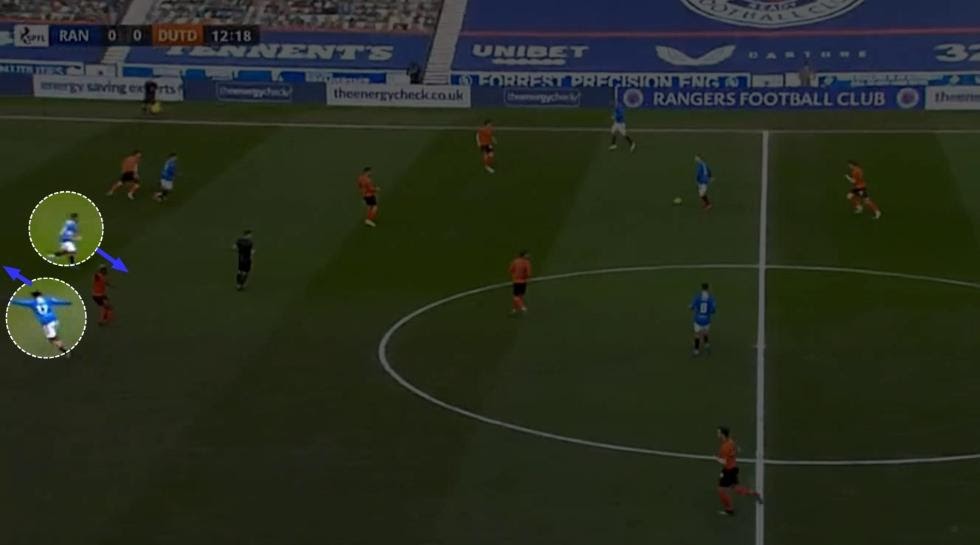 Counter-movement as a result of spatial occupation

The Intention Behind the Overloads

One of the things this Steven Gerrard side is good at is overloading areas of the pitch and using it to their advantage. Whether they are defensive overloads or offensive overloads they make sure they use it to their good. When in possession, they overload with the intention of not just providing more options to the ball carrier but also in case they lose possession, to win the ball back with numbers. 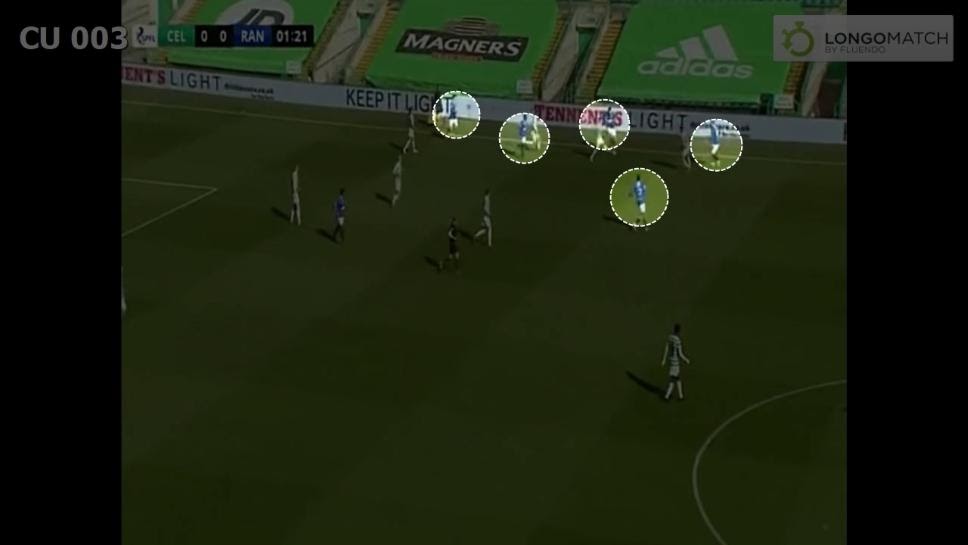 The above image shows the numerical superiority that Rangers offers in possession. In the same situation, the overload in possession helps them to press effectively if they do turn over the ball. 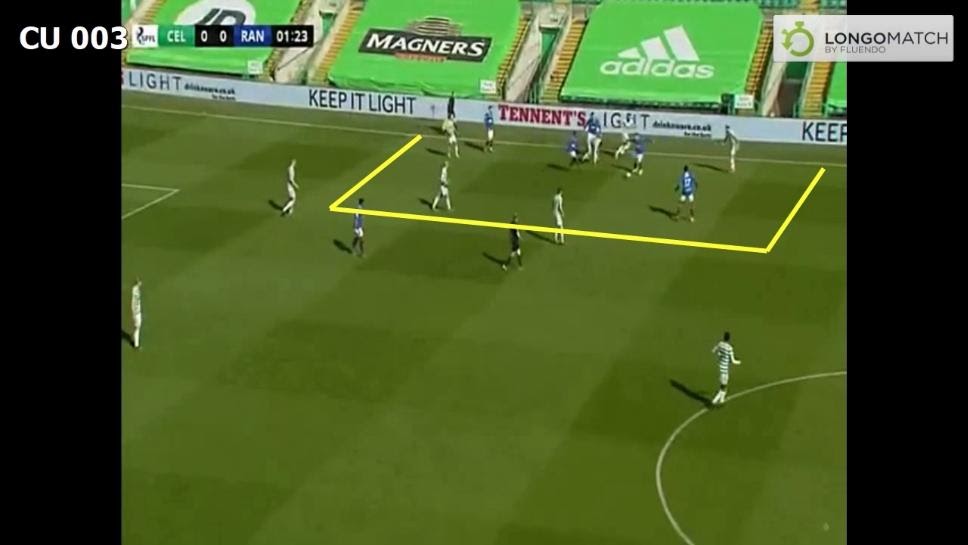 When out of possession, their zonal defence shifts across to the ball near side and become so narrow that they choke the ball out of the opposition and in doing so when they recover the ball they have enough numbers to keep the ball or hit the opposition on the counter-attack. 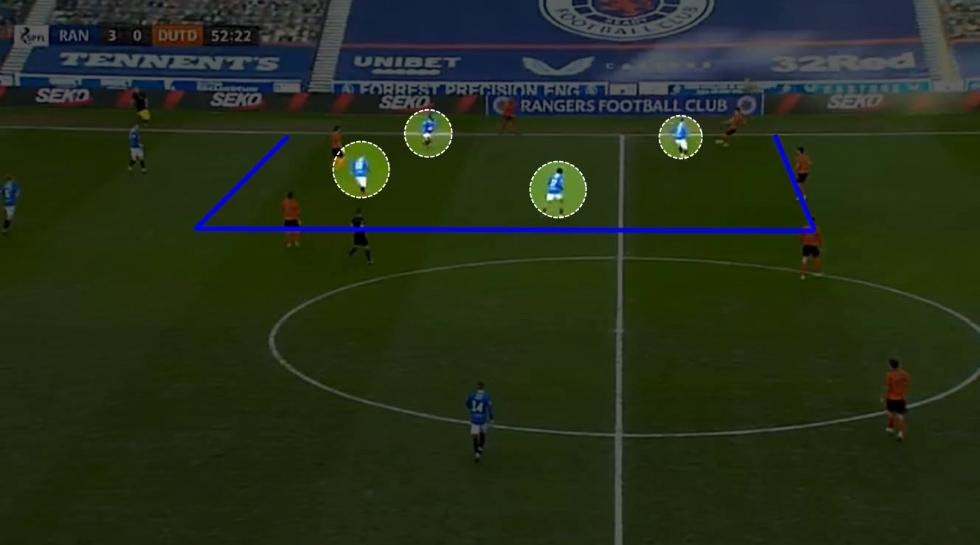 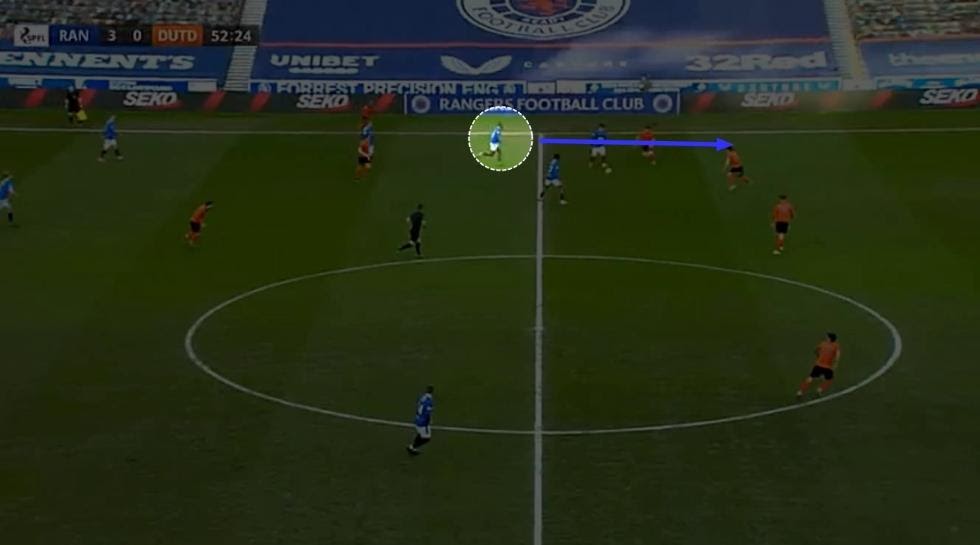 The defensive overload they create on flanks helps them counter attack

Their rest offence forms a triangle with Alfredo Morelos on top between the opposition center backs and their wide forwards dropping deep and moving slightly inwards. This complements their overloading system as their wide forwards can overload the flanks while screening back passes and also initiate a quick counter-attack 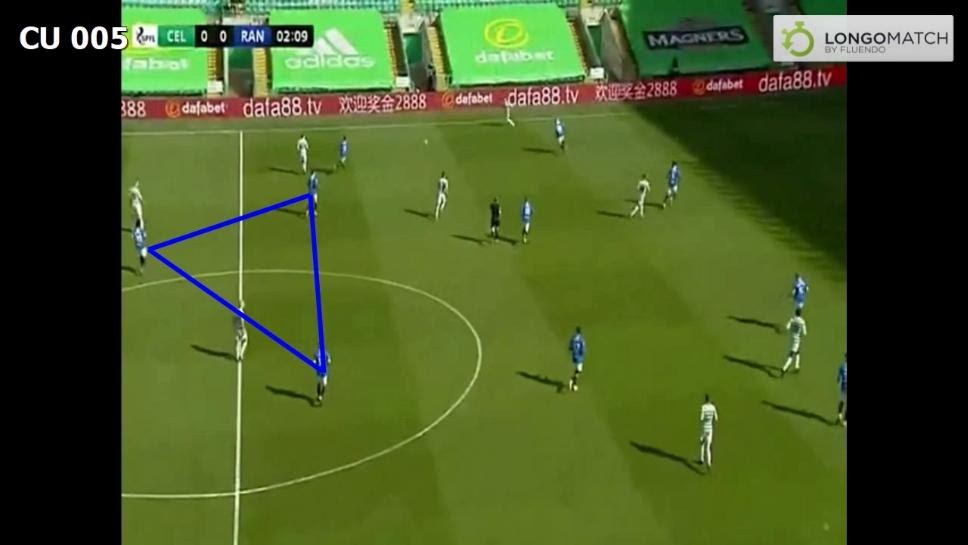 Out of possession, Rangers deploy a man-oriented pressing system where they man-mark all possible options to the opposition ball carrier. The front three moves in synchronisation in relation to the ball with the aim of preventing the opposition from playing through the center. The wide forwards prioritise defending the ball from reaching opposition pivot or pivots and instead lures the opposition to pass to the flanks where they can overload and win the ball back. 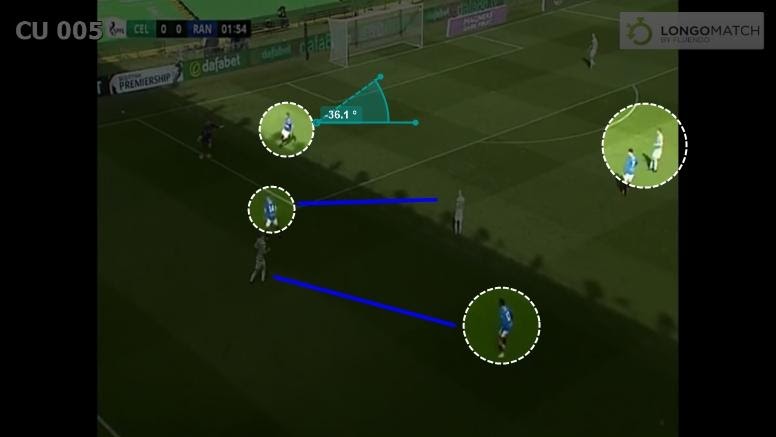 Rangers’ front three prevent the opposition from progressing the ball through the centre. 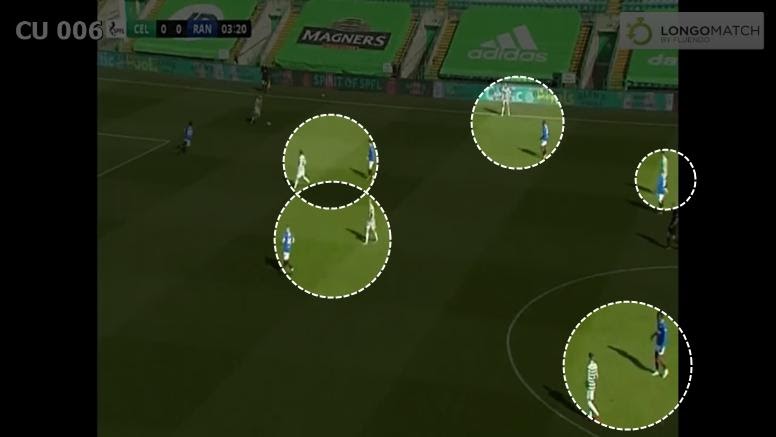 As Steven Gerrard was wrapping up his playing career with the LA Galaxy, Rangers were clawing their way back to the top-flight; they would go on to finish a whopping 39 points behind their local rivals in their first season back in the Scottish Premiership, before placing third for the second straight time behind Aberdeen and Celtic, with Brendan Rodgers’ side enjoying a 12-point gap at the end of the 2017/18 season.

It has taken three years, but Gerrard has finally delivered Rangers to a league title and put an end to Celtic’s hegemony. Now, he has the pressure of repeating his domestic heroics and continuing Rangers’ impressive intercontinental form, and it is clear that he has the blueprint to do so. At 40 years of age, Gerrard is proving why he is one of the most promising managers in Europe.