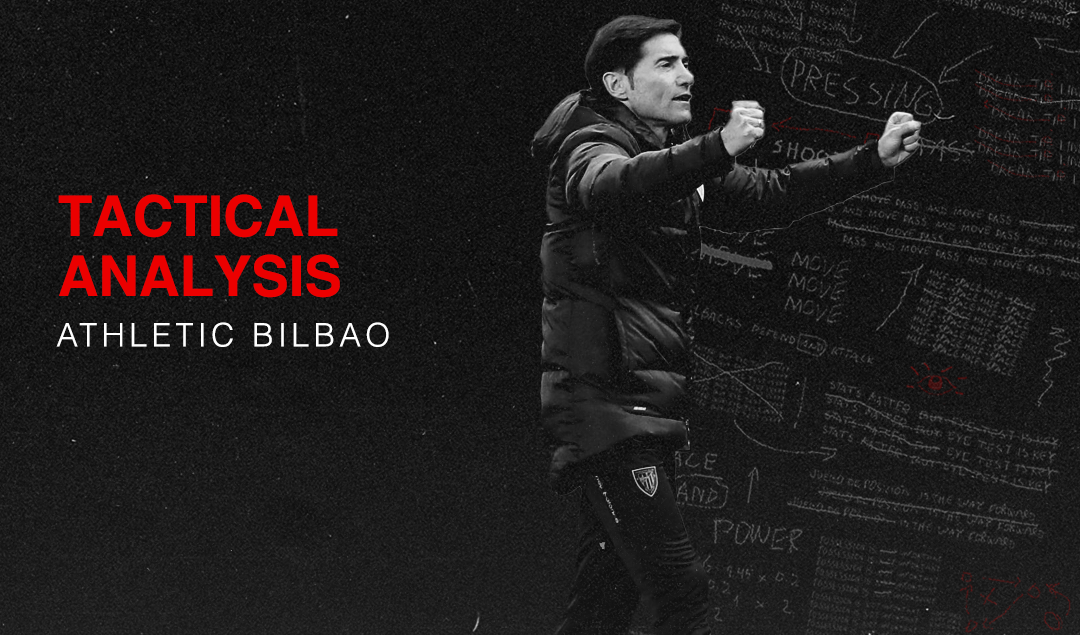 18 months after being fired by Valencia, Marcelino García Toral has returned to management, replacing Gaizka Garitano as manager of Athletic Club de Bilbao. The fixture list after his appointment provided a fantastic opportunity for the Spanish manager to win over the faith of the Athletic Club supporters with massive matches in La Liga against FC Barcelona and Atletico de Madrid (which was postponed due to a snowstorm that hit Madrid), as well as victories against Real Madrid and FC Barcelona in the Supercopa de España.

After two weeks into his reign of the Basque Giants, Marcelino has a Supercopa in his pocket along with a place in the round of sixteen in the Copa Del Rey. It is fair to say that it looks like Athletic Club have selected the right man – not only for the positive results but also the sporting performances that are on show.

Marcelino has always had a simple reputation: compact 4-4-2, verticality, and rapid transitions. Despite only two weeks in the job, it is clear for all to see that he has been transmitting his principles successfully to the players of Athletic Club.

The intention of Marcelino’s midblock is to prohibit central progression. The task that he poses to his forward line, usually consisting of Raúl García and Iñaki Williams, is to block access to the opposition’s pivot, permitting Athletic Club’s midfielders to stay in position. This is an essential task as it maintains a reduced space between the defensive and midfield lines. Once the passing lane to the pivot has been removed, a forward then applies pressure onto the in-possession centre back. This pressure is at an angle to force play towards the sideline. 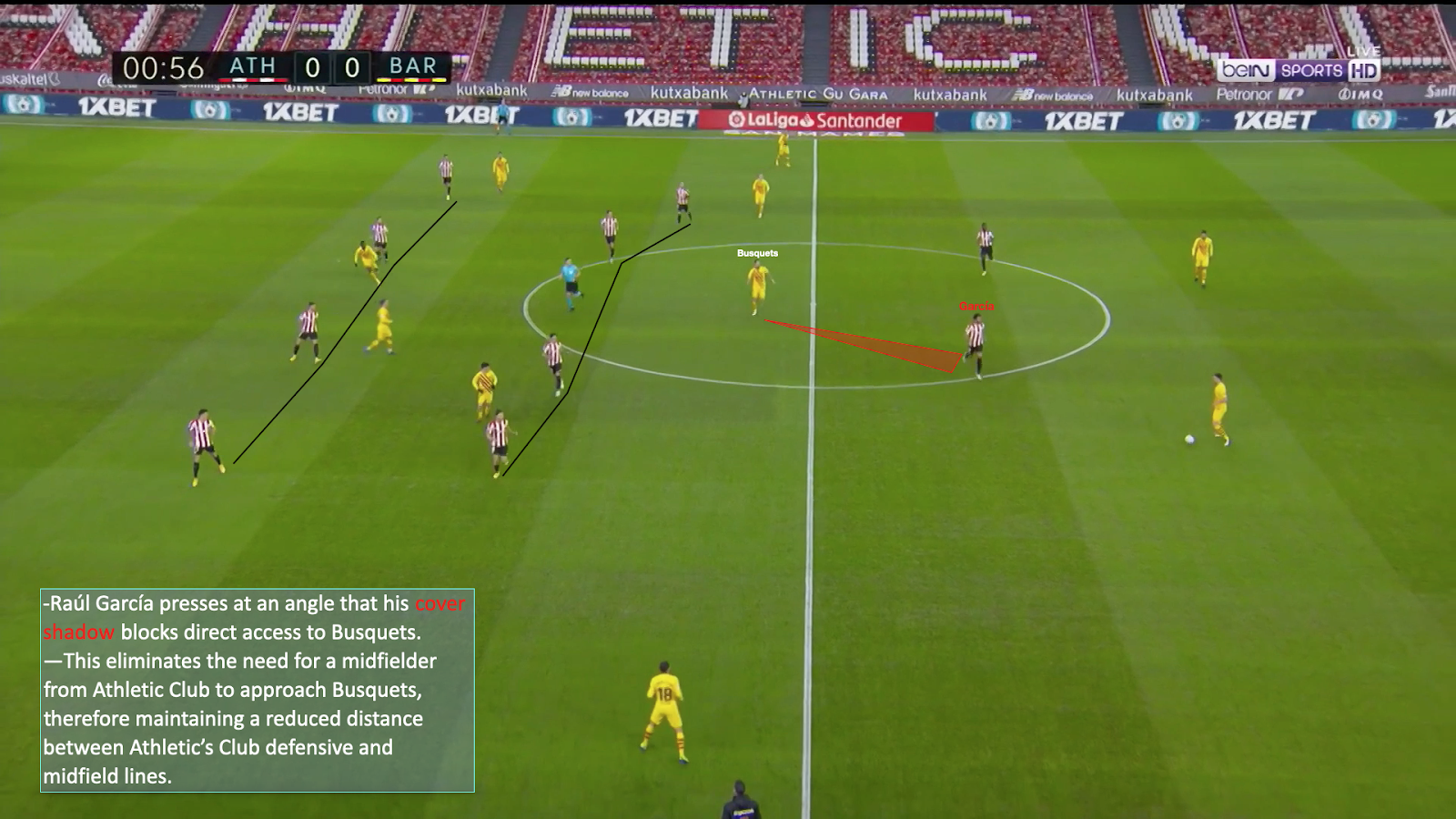 The midfield line of four, regularly containing Iker Muniain, Dani García, Unai Vencedor, and Óscar De Marcos, remains compact, ceding space on the flanks rather than central passing lanes. As the ball is forced wide by the forwards, the wide players travel to reduce the Area of Mutual Help – the area around the ball. The wide midfielder steps intensely to the receiving fullback, cutting off central options. 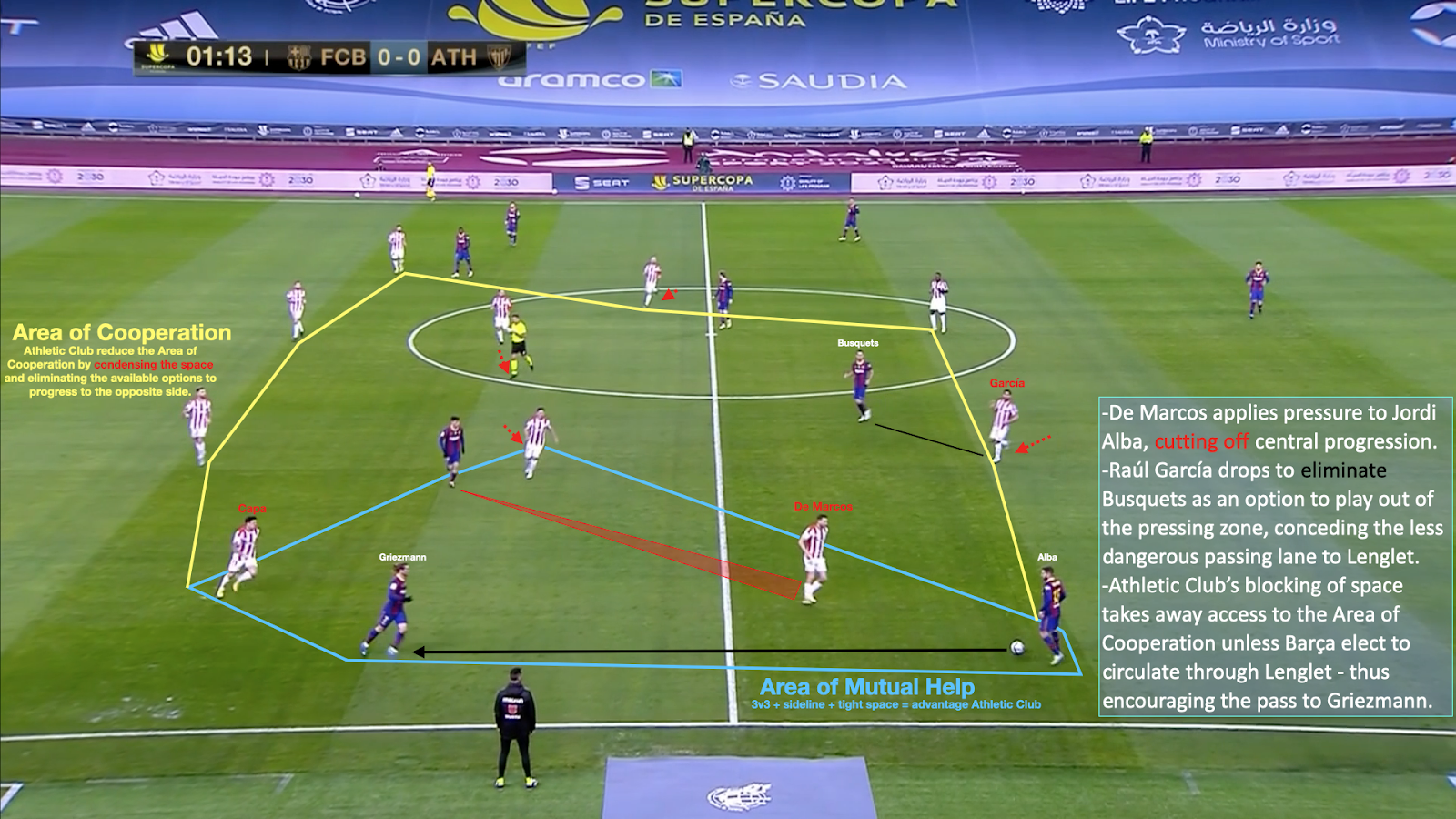 This encourages either a backwards pass to the centre back, moving the ball into an unharmful area, or a vertical pass in agreement with the sideline – which is a pass that offers little to no progression because the receiver’s body orientation is positioned facing his own goal with pressure at his back. Additionally, because of the presence of the sideline, the directions that the receiver can play to are limited. Essentially, the receiver only has 90 degrees to link with a teammate to play out of the pressing zone.

With this in mind, the players in the Area of Cooperation (the space distanced from the ball) are able to proact to cut off the options within said 90 degrees. They move themselves into positions that remove passing lanes for the receiver to play out of the Area of Mutual Help, which is ever-condensing. 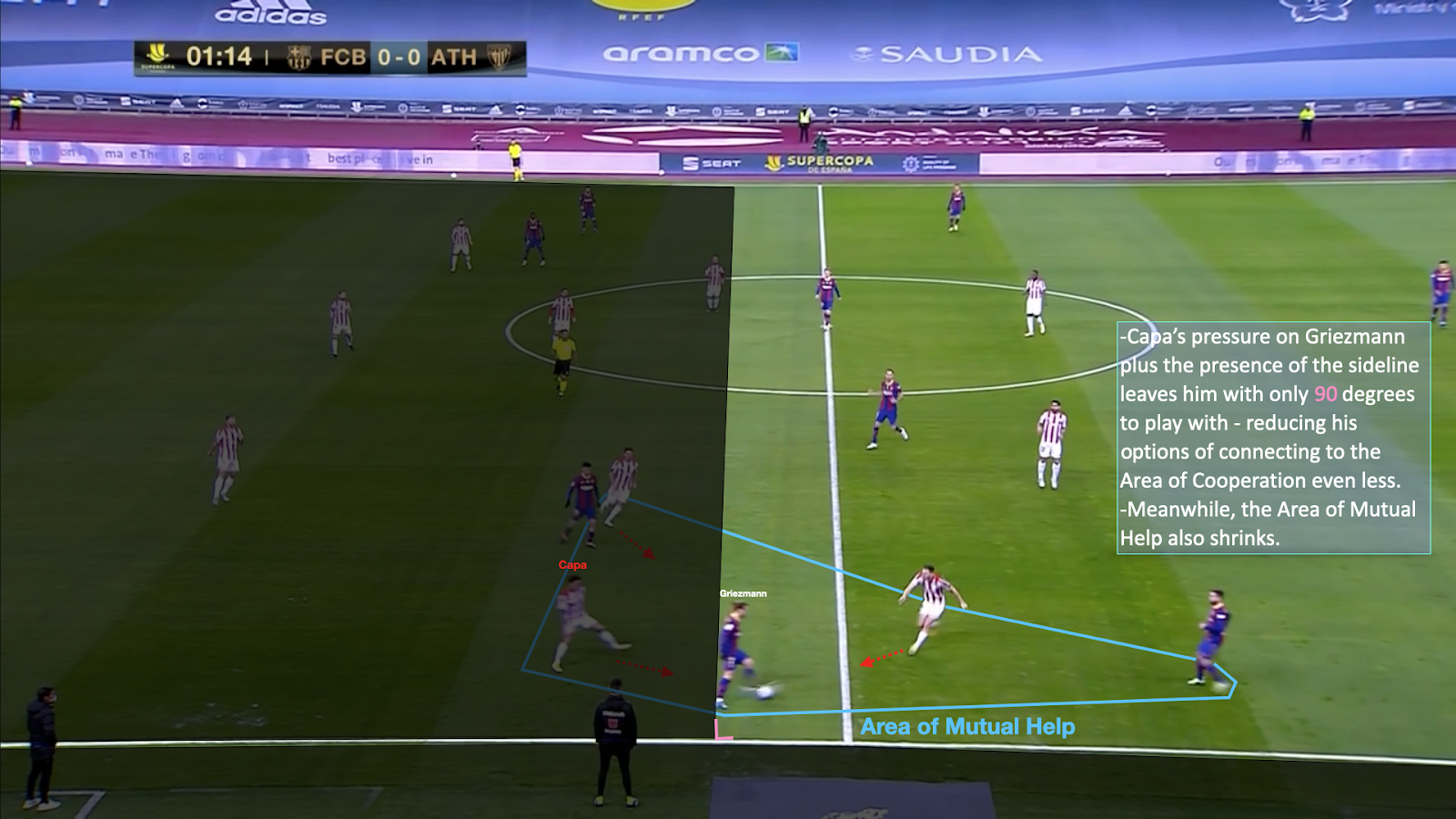 Once the ball is won from the Area of Mutual Help, Athletic Club look to break pressure immediately by finding the feet of Williams or García. Given that they normally win the ball through numerical overloads, they have quantitative superiority instantly after regaining possession of the ball. The other makes a run in behind the outlet, becoming a possible third man off the backs of the opposition’s last line. The midfielders move forward to support beneath the outlet, providing security of the ball possession. 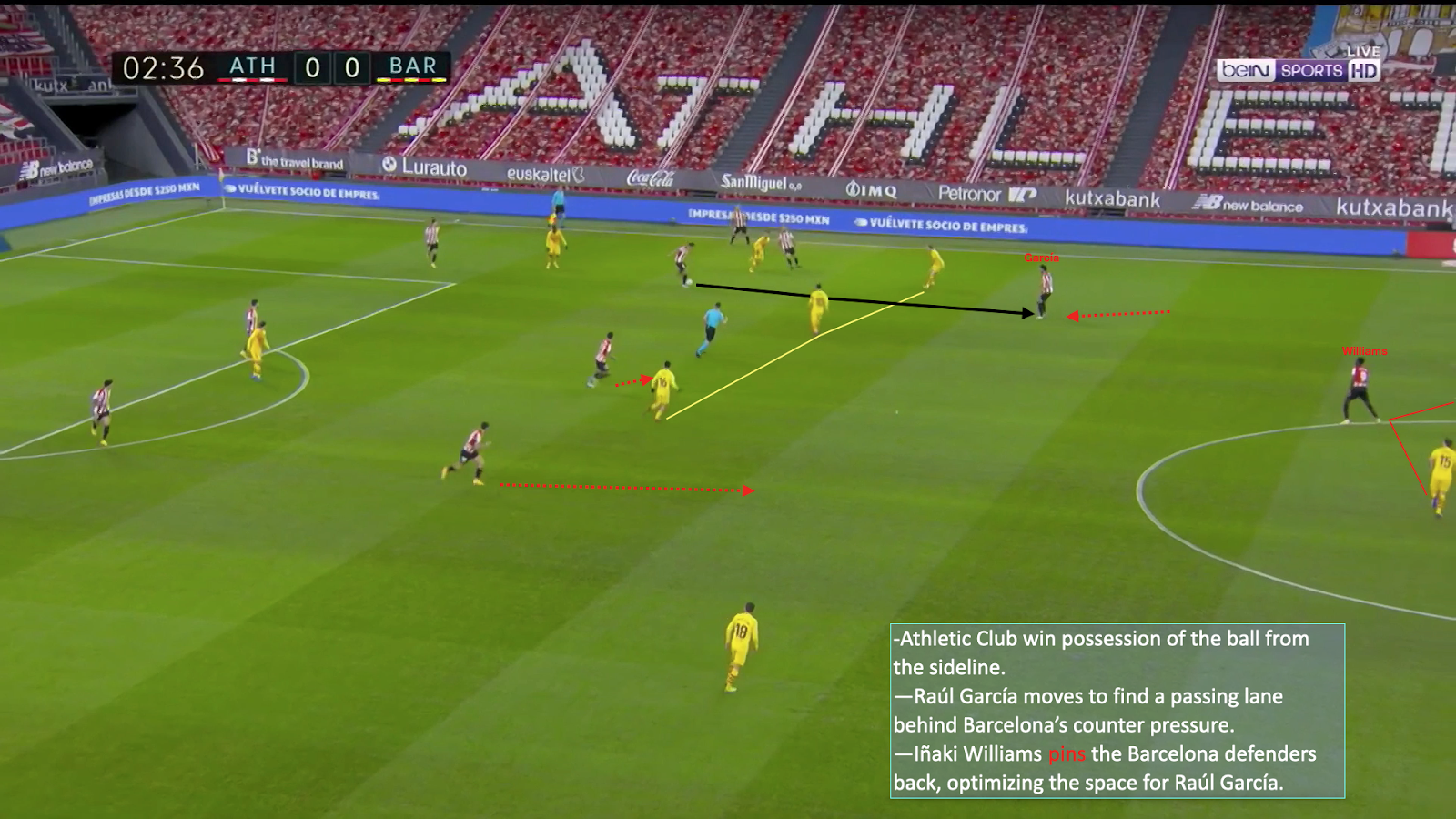 The profiles of both Iñaki Williams as much as Raúl García excel in these roles. They have a superb spacial relationship which sees each react to the movement of the other players, therefore maximizing the space for one another. 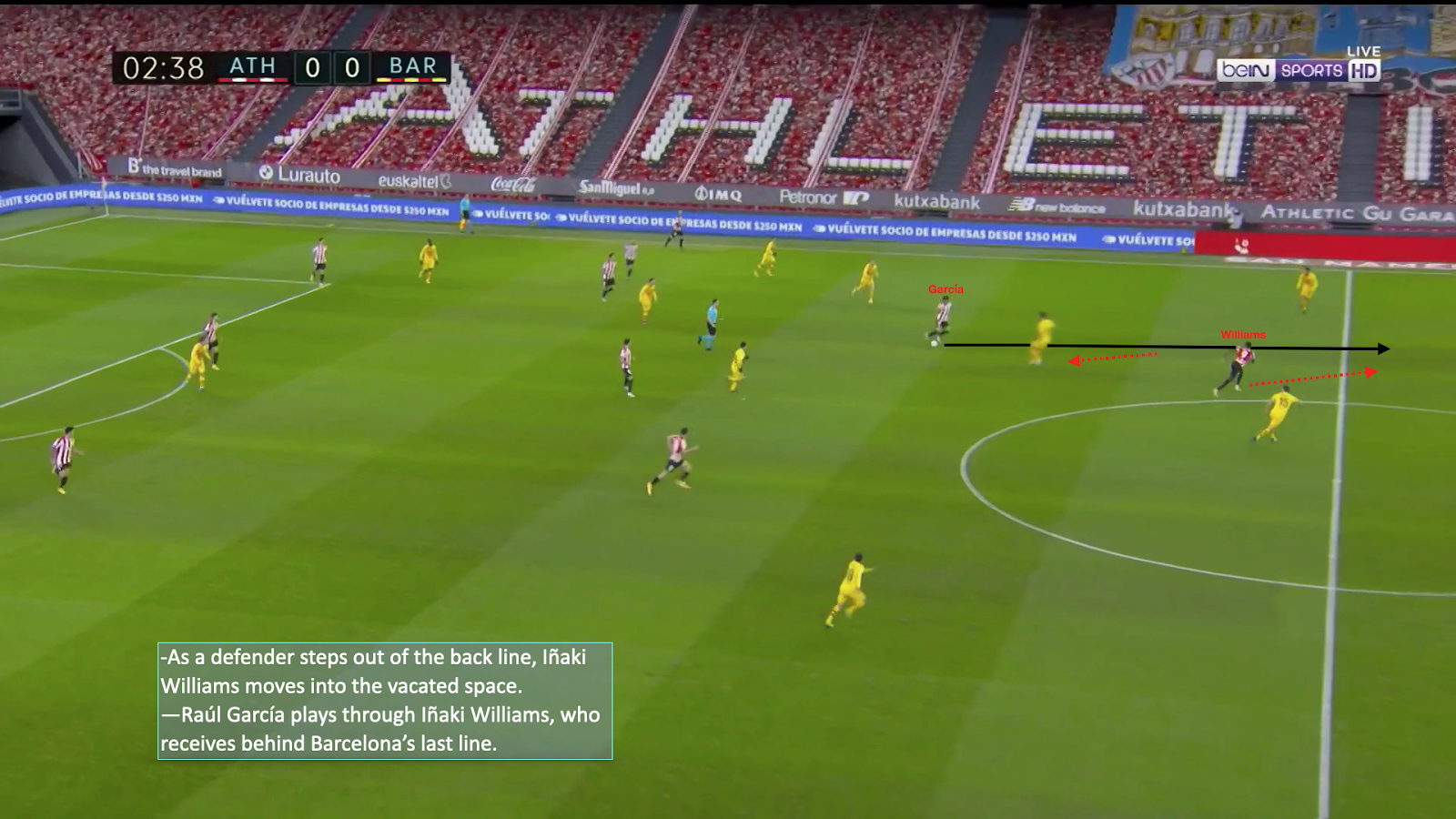 Due to Athletic Club’s threatening counter-attacks, the opposition naturally takes fewer risks when attempting to progress past their first line of pressure. If a free centre back were to commit forwards after a circulation, he would leave a gaping space in behind that could be exploited with ease should the possession of the ball be relinquished. This fear that Athletic Club strike into the opposition make their rivals less likely to commit players forwards from these protective areas, making the overcoming of their midfield line even more difficult to achieve.

Athletic Club apply a fierce high pressure. In a 4-1-3-2 shape, the forwards apply pressure directly to the centre backs while the three midfielders block central passing lanes. This leaves space for the fullbacks to receive. 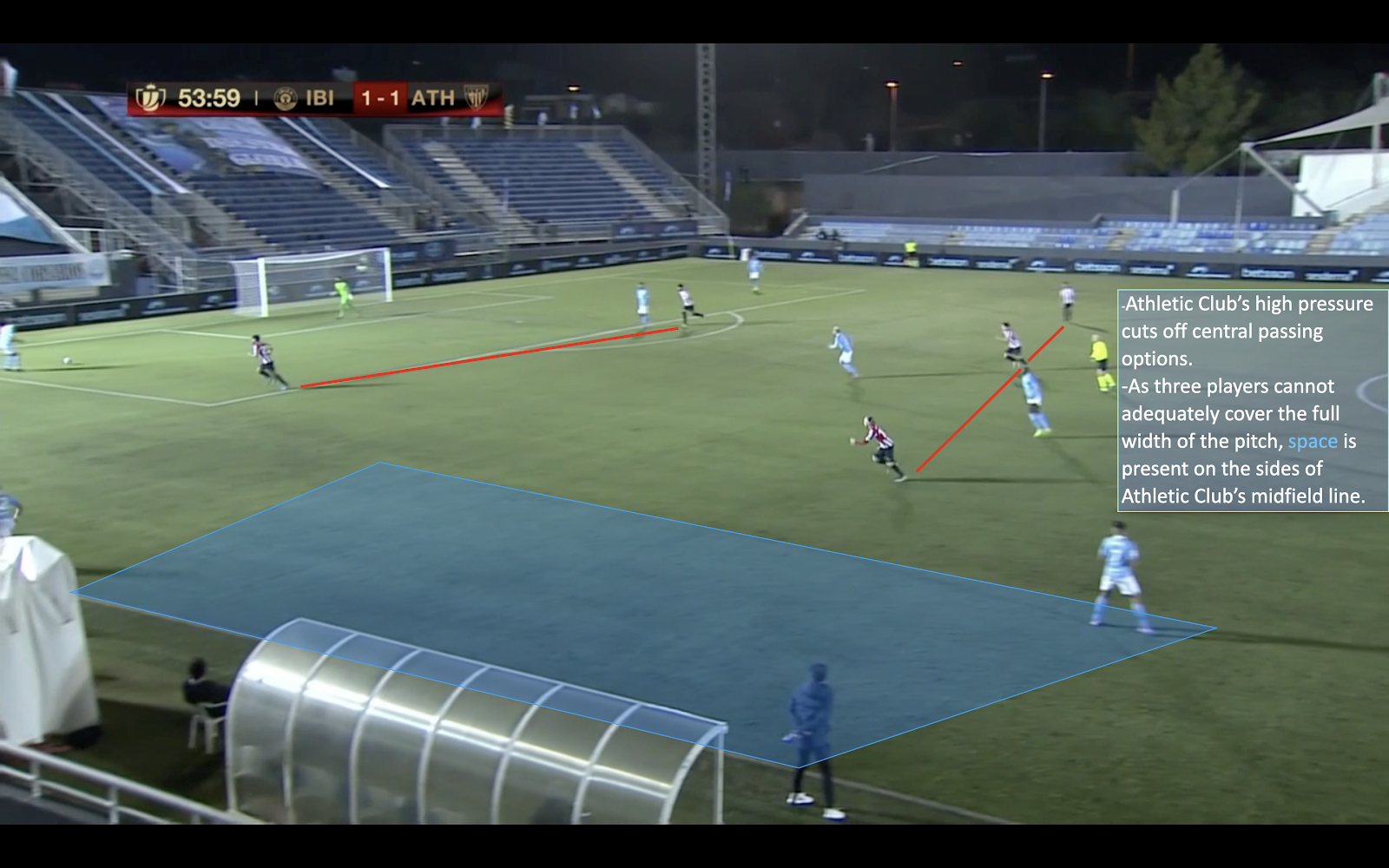 However, by the time that the ball takes to arrive at the feet of the fullback, Athletic Club’s wide-midfielder is able to apply pressure, cutting off inside passing lanes. This, once again, encourages a vertical pass along the sideline into the feet of the poorly-orientated winger. 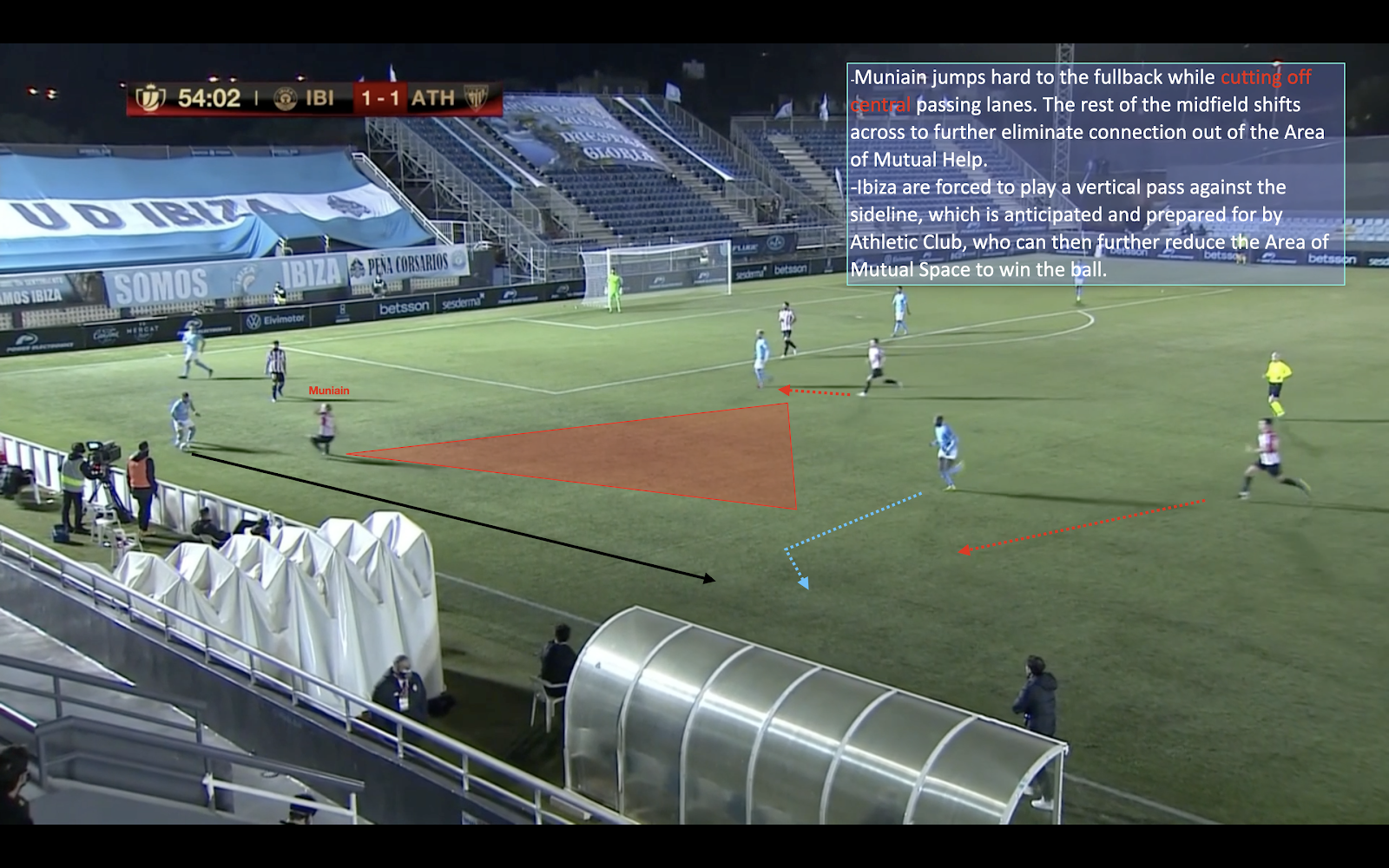 As the vertical pass is played, the block shifts, condensing the Area of Mutual Help and thus eliminating options to progress away from the sideline. This increases the chance to win the ball high up the pitch as it shortens the space/time that the opponent has to operate with. 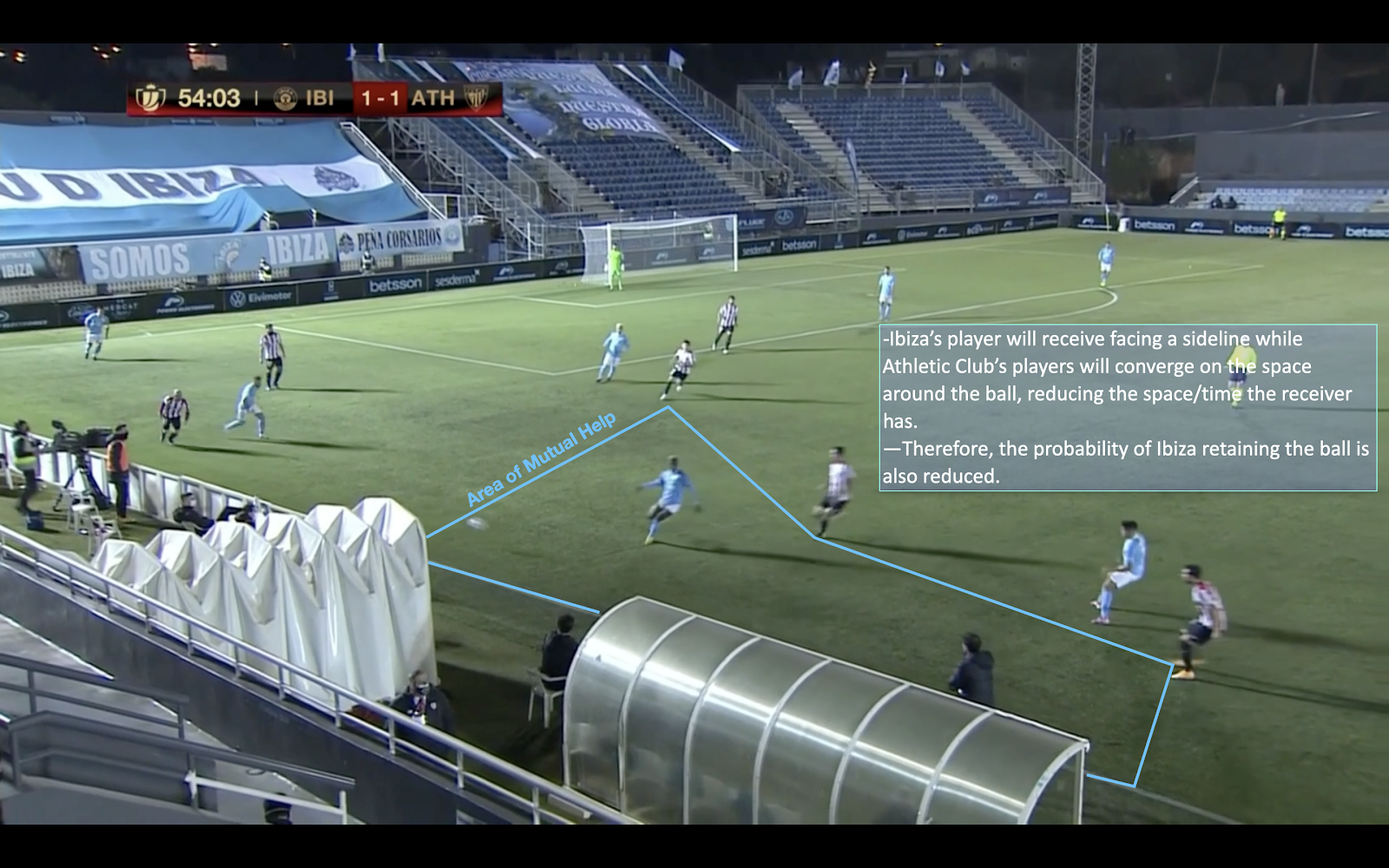 Once Athletic regains possession of the ball, they form a 1-2-3-5 shape in possession. Íñigo Martínez and Yeray Álvarez have started all games under Marcelino so far, with Mikel Balenziaga and Ander Capa joining the centrebacks to fill out his back four. 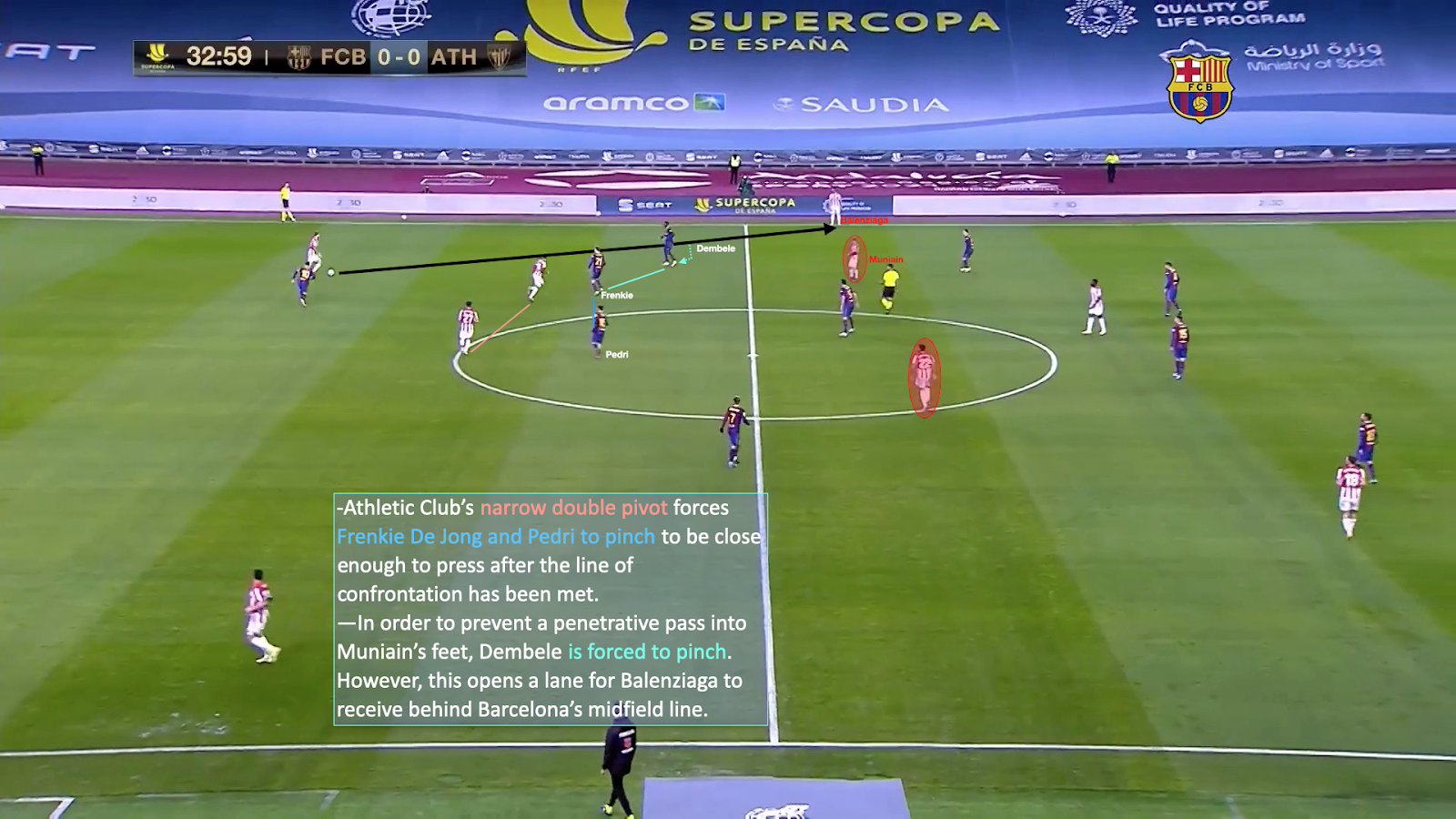 Once this progression is obtained, Athletic are attacking a numerical superiority against the backline of the rival. A variety of automatisms are used to optimize the productivity of these situations. 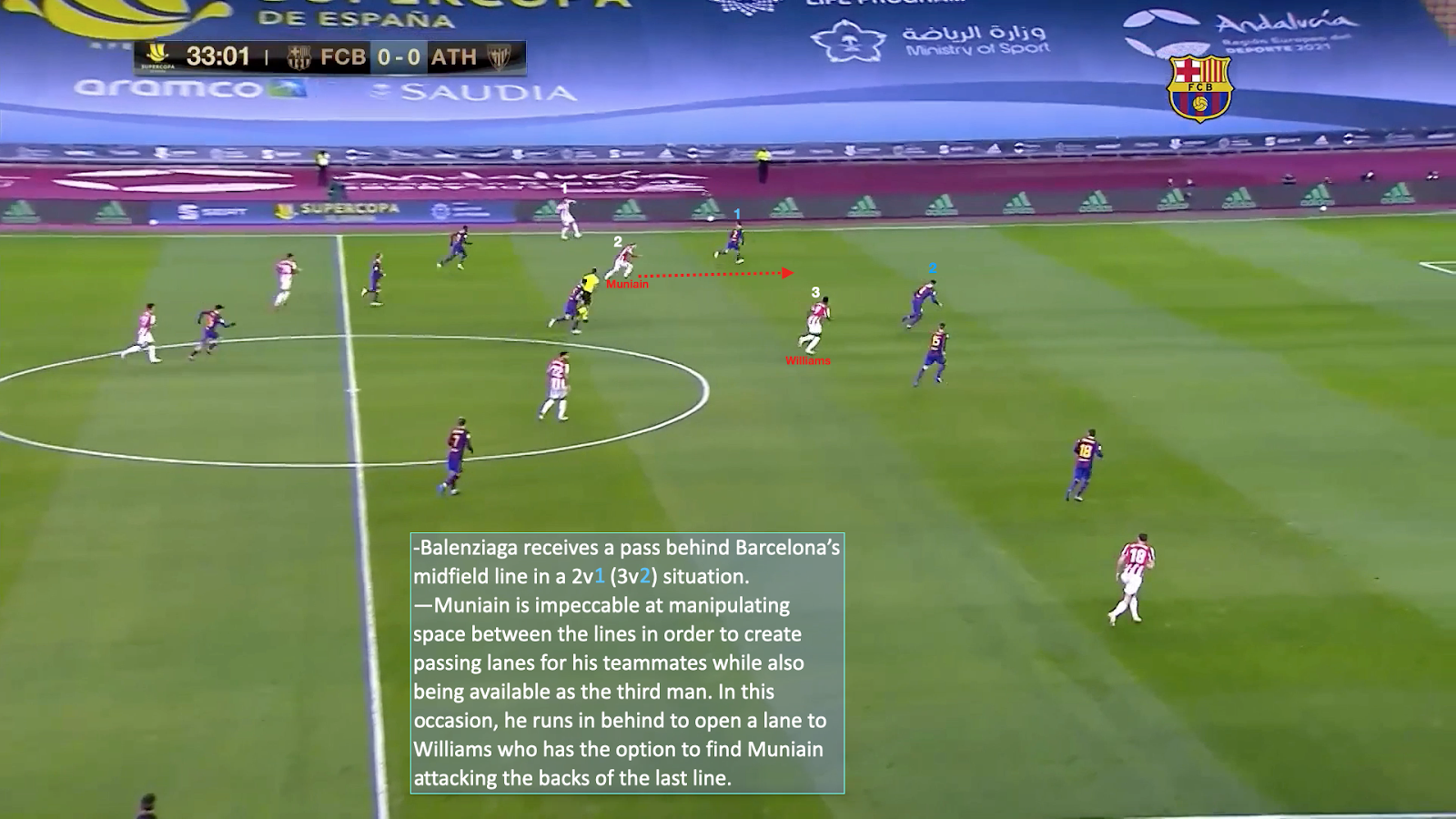 Another variation that Marcelino has implemented has seen a fullback drop to form a back three. This sees the in-possession shape morph into a 1-3-2-5. The pivots once again remain narrow, which, in addition to tightening the opposition’s midfielders, crucially protects the width formed by the back three. This width across their first line forces the opposition’s midfield to remain wide after the line of confrontation has been met, therefore ceding indefensible space in the halfspaces. 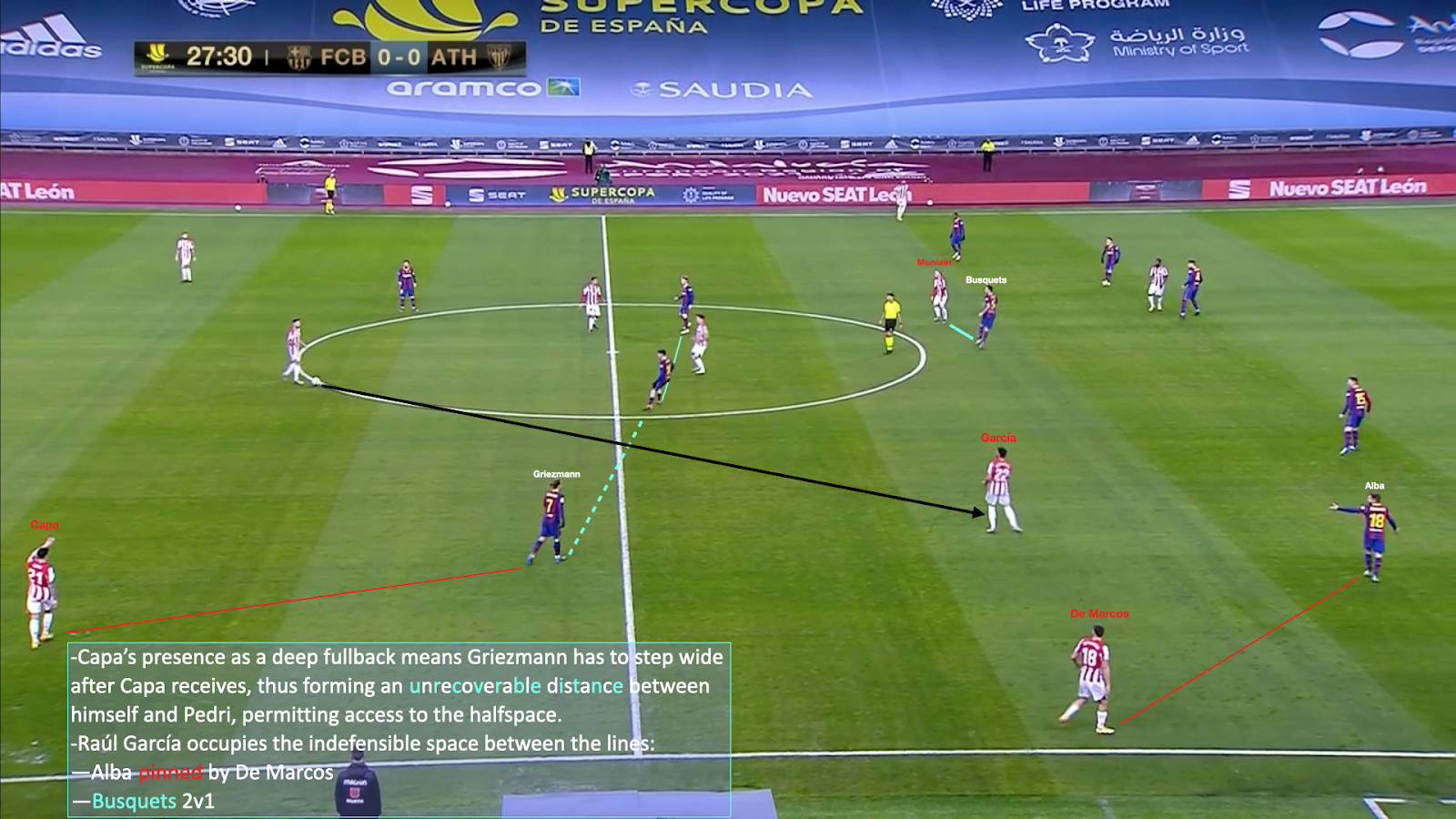 Marcelino has constructed a team that is capable of generating chances from transitions as much as buildup play in addition to their compactness in possession. However, there are some weaknesses that the opposition can expose.

If I were the manager of a team facing Athletic Club, I would elect a back three with a central pivot. The left back would invert into the halfspace, positioned slightly behind the forward line of Athletic Club. This narrow position from the fullback would allow for the left centreback to be positioned wider, increasing the fluidity of the circulation. 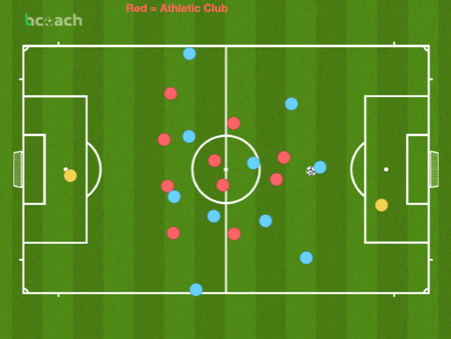 I would also elect wingers to hold the width of the pitch. When breaking down a compact block, it is essential to maintain width. This is because the width of the pitch is invariable for the team out of possession – in other words, the opposition is unable to shorten the width of the pitch as they are able to with the length of it due to the offside rule. For this reason, players occupying the wings at a height is critical to maximizing the space that is permitted.

The positioning of the back three and inverted wingback would crucially avoid vertical lines from being formed between the fullback and the winger – which Athletic Club thrive off of. This shape would ensure that lines of such type would not even be able to be formed, nonetheless passed through.

Two interiors would occupy the halfspaces off the shoulders of Athletic’s second line, pinning back their midfielders. This will create more space for the single pivot and inverted fullback who are positioned behind Athletic Club’s forward line.

In the days leading up to the match, I would train the following automatisms to provide the players with positional solutions that would solve the challenges they encounter throughout the match.

The first automatism shifts the first line of Athletic Club with a circulation. As the ball is returning back across the back three, the inverted fullback should approach the backline as if to receive the ball. If he remains unmarked, progression past Athletic Club’s first line can be achieved with a simple pass to his feet. If he is tracked, it will be Athletic Club’s right midfielder. This engagement moves Athletic Club’s player who jumps to the indefensible space further away from it – thus maximizing the total area that is indefensible.

As this movement occurs, the left centreback should progress up the pitch because the deeper position of the inverted fullback means that he can cover the space vacated should the ball be turned over. The goalkeeper should also move forwards to add an extra number to the attack.

Concurring with the inverted fullback’s movement, the pass should be played into the left winger that is arriving into the space vacated by Athletic Club’s wide midfielder. If the pressure on his back is too intense or the pass is not played to the correct foot, the winger can return the ball back to the goalkeeper to retain possession. If the conditions are correct, the automatism can continue.

The left interior should drop away from his starting position between the lines, occupying the central midfielder of Athletic Club. This will in turn create a passing lane for the winger to connect with the striker, who must arrive with his body between the ball and the defender.

The wide centreback that started progressing up the pitch must continue forwards, overlapping the winger in possession. This will force the fullback to start to back off, ensuring a clean pass into the feet of the forward, who can then play in the overlapping fullback. The fluid version is displayed below:

Another automatism that seeks to achieve the same objective is displayed below:

As in the first pattern, the inverted fullback must make a movement into the deep space to receive the ball. This will pull away Athletic Club’s left midfielder from the side of their block, increasing the space that the receiver will have. The advancement of the left centreback should occur again in order to maintain a positional structure that generates superiorites.

As the space is vacated by Athletic Club’s left midfielder, the left interior should move into a wider and deeper position behind the second line of Athletic Club. The left centreback should continue his run forwards, creating a 2v1 on the central midfielder that applies pressure to the interior. The left winger should make a run across the left back, forcing the fullback to tuck in and turn his body shape away from the wing – increasing the space that the left centreback arrives into. The fluid version is displayed below:

Another positional advantage that could be gained against Marcelino’s side is one that seeks to attack the channel.

With the striker pinning the ball-side Athletic Club centreback and the winger maintaining the width, the distance between Athletic Club’s fullback and centreback will be large enough to filter a pass through the channel. With the initial position of the interior being between the lines, he has head start of a few meters over his marker:

Not only do the positive results seem to justify the decision for the appointment of Marcelino, but the identity of the team is clear for all to see in such a little time frame. Marcelino has earned the complete faith from his players, who seem to fully trust that his ideas will bring them the success that they so yearn.