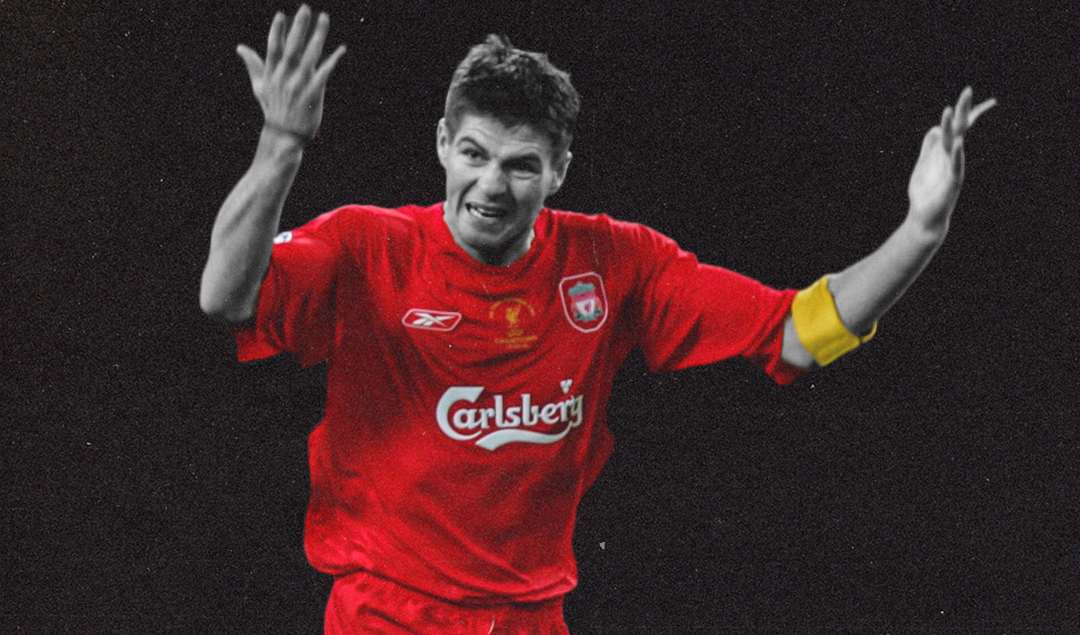 Earlier this month, Liverpool fans celebrated the 15th anniversary of their famous Champions League victory in Istanbul. The Reds trailed AC Milan 3-0 at the break, but three quick goals from Steven Gerrard, Vladimír Šmicer and Xabi Alonso brought them back to level terms, where the trophy was eventually won on penalties.

This tactical analysis will explore what went wrong in the first half and how manager Rafa Benítez inspired the comeback with his half-time changes.

Liverpool started in a 4-4-1-1 shape, with Harry Kewell playing off of striker Milan Baroš. Alonso was supported in a double-pivot by Gerrard, who played in a deeper position than usual.

After conceding from a set-piece in the first minute, Liverpool were forced to seek the initiative and attack Milan.

In possession, their shape resembled a 4-1-1-4 with Alonso deep, dictating the play, and Gerrard just in front of him acting as a box to box midfielder. Luis García and John Arne Riise provided width high up the field, while Kewell operated in support of Baroš.

Liverpool initially looked to build short through the centre-backs before finding Alonso to launch long balls towards the flanks. Kewell was tasked with the job of making runs into the channels whenever the AC Milan full-back pushed up to press the opposing Liverpool winger.

But Milan generally did a good job of stopping these attacks at the source by leaving the centre-backs unmarked and blocking off passing lanes.

Kaká in particular would stay very tight on Alonso, and Gennaro Gattuso or Clarence Seedorf would be in position to aggressively press Liverpool’s full-backs when they received the ball deep.

In the middle of the first half, Liverpool ditched their short build-up and looked long towards Baroš, but the Czech forward struggled to compete in the air with dominant centre-backs Jaap Stam and Alessandro Nesta.

Unlike Liverpool, Milan progressed the ball with ease in the first half. They established numerical superiority in the build-up with Andrea Pirlo slotting in between and just ahead of the centre-backs, where he was able to find ample time and space.

This was partly down to his own intelligence and awareness, but also because Liverpool operated with a flat midfield line. Should Gerrard or Alonso look to engage high up the pitch, large spaces would appear in between the lines for the likes of Kaká.

In fact, even with Liverpool’s double-pivot deep, Milan were able to cause their English opponents serious trouble in the midfield.

Gerrard and Alonso were stretched by the positions of Seedorf and Gattuso, and with Hernán Crespo and Andriy Shevchenko occupying Liverpool’s centre-backs, Kaká was able to drift into pockets of space unmarked.

Milan also looked to exploit the lack of pressure on Pirlo directly. The Italian would play long accurate passes to willing runners Shevchenko and Crespo, who often benefited from poor defensive positioning in the back line.

A particular weak link was left-back Djimi Traoré, who either strayed too high and left space to run in behind or too low and played one of Milan’s strikers onside.

The biggest weakness behind the Gerrard-Alonso double pivot was exploited in defensive transition. When Liverpool were in possession, Gerrard would look to join the attack and thus leave Alonso isolated in midfield. When the ball was turned over high up the field, Milan effectively had the entire centre of the pitch to charge through.

See below as Kaká roams into acres of space before picking out a through ball for the onrushing Crespo. The Argentine would finish superbly, but was denied his goal by the offside flag.

But this served as a warning for what was to come. Just minutes later, Liverpool turned the ball over high up the pitch again. Kaká positioned himself in between the lines, before dribbling forward and finding Shevchenko to assist Crespo for the tap-in finish.

The third goal was similar. Kaká’s turn away from Gerrard left Alonso completely isolated in the midfield. This time though, instead of penetrating the space directly, the Brazilian played a delicious ball into Crespo who dinked over Jerzy Dudek to seemingly seal the deal.

Second Half Changes By Rafa

With Milan winning 3-0 at half-time, Benítez didn’t just have problems to solve; he had a mountain to climb. Not only did the Spaniard need to generate a sense of belief that Liverpool could complete the impossible, but there were many tactical errors to explain and fix in just a short space of time.

Benitez opted for a 3-4-2-1 formation in the second half, with Traoré slotting in at left-centre back. Riise dropped back to left wing-back while Šmicer, who had replaced the injured Kewell late in the first half, was the right wing-back.

The most important change of the game, though, was the introduction of defensive midfielder Dietmar Hamann for the injured Steve Finnan, forming a double pivot in midfield with Alonso. This provided Gerrard with the freedom to play further forward, as a number ten of sorts, alongside García.

The change to a back three helped Liverpool finally establish secure possession. They were able to spread Milan’s front two of Crespo and Shevchenko to create space inside for one of the midfielders, or progress the ball directly by bypassing the first line with a dribble.

See below as Crespo and Shevchenko hold their ground to prevent the pass inside, inviting Carragher to step forward and make the progression himself.

If the wide midfielder, Seedorf, pushes to press in this situation he leaves a lane open to Liverpool’s right wing-back, Šmicer. This then creates another predicament as Milan’s left-back, Paolo Maldini, has to decide whether to allow Šmicer time and space on the ball or engage with him high up the field and leave space in behind for a runner.

Conversely, when Milan closed the ball-side down heavily, it was fairly easy for Jamie Carragher to switch the play towards left wing-back Riise, who was supported on the inside by Gerrard.

Benítez’s change of system allowed Gerrard and García to take up positions in between the lines, without sacrificing width or defensive cover. They looked to do to Milan what Kaká had done to Liverpool in the first half.

See below as Gerrard’s drop from a high position engages Pirlo and thus vacates space in between the lines for García to attack.

With Gerrard and García playing just off of Baroš, Liverpool also had extra box presence in the second half. This was especially useful as the Reds now had wing-backs instead of full-backs and were able to cross from dangerous positions.

In the first half, Baroš was dominated in the air by Milan’s centre-backs but, in the second half, Nesta and Stam had more on their plate. Liverpool’s first goal saw García and Baroš occupy the defensive pair, allowing Gerrard to ghost in between them and head home.

It’s fair to say that, in a freer position, Gerrard ran the show in the second half. His late run into the box won the penalty that would eventually lead to Liverpool’s equaliser. Alonso was denied from the spot by Dida, but followed up and smashed in on the rebound.

After this goal in the 60th minute, Liverpool slowed their tempo and focused on remaining defensively sound. With the back three, they were able to better cover Crespo and Shevchenko and, with the addition of Hamann, they were less exposed to the movement of Kaká in between the lines.

The game went to extra time at 3-3 and eventually penalties, where Dudek’s save from Shevchenko ensured that the Champions League trophy would return to Merseyside.

In what was one of the most iconic matches in football’s short history, Liverpool defied all odds to come from behind and topple one of the most talent-decorated teams this century.

Luck was undoubtedly on their side, but it is important to recognise the tactical changes made by Benítez that gave his players a chance.