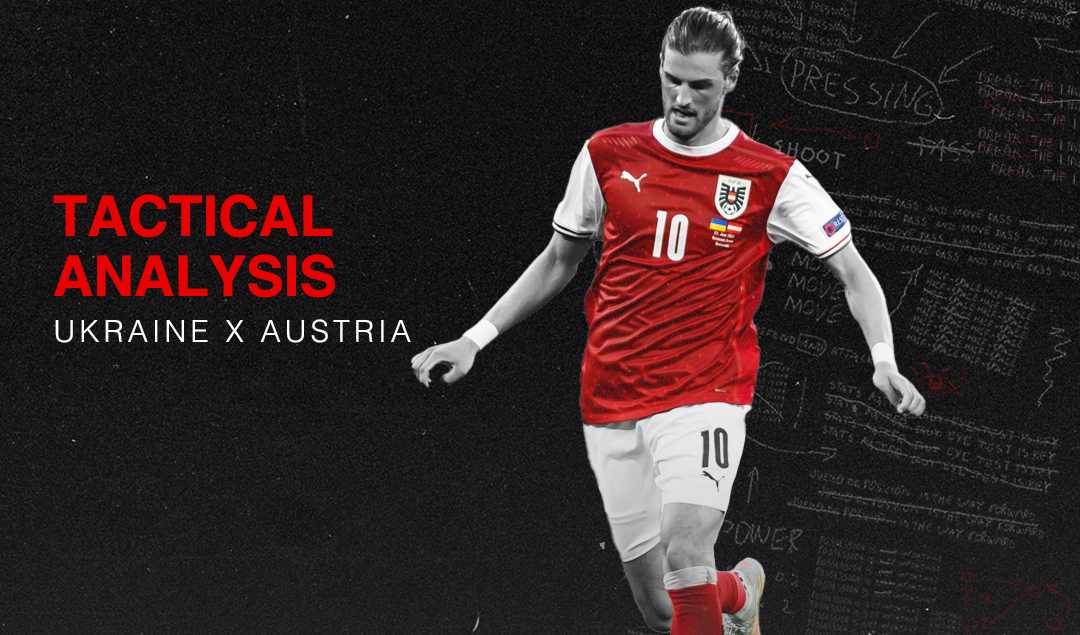 For the first time in the nation’s history, Austria have secured qualification for the knockout stages of the European Championships, following a thoroughly deserved 1-0 victory over a rather disappointing Ukraine. In what started as an end-to-end affair, it was Austria who quickly asserted dominance on the game, who were rewarded with a breakthrough goal at the 20-minute mark.

Hoffenheim talent Christoph Baumgartner latched onto the end of David Alaba’s perfect corner delivery. Unfortunately, however, the goalscorer was forced off just 10 minutes later due to a head injury he suffered early in the half.  This didn’t slow Austria down though, who continued to create an abundance of chances, primarily down the left-hand side where Alaba had joy with his overlapping runs. In contrast, it seemed Marko Arnautovic left his shooting boots at the hotel, missing a golden chance on the stroke of half time.

The Burschen made it mightily difficult for Ukraine to play by ensuring their shape was compact throughout the 90, nullifying their opponents’ most dangerous threats. The in-form Andriy Yarmolenko was kept quiet by Alaba and the highly-rated Ruslan Malinokskyi was hooked at the half time interval after failing to have any influence on their attacks. Ukraine never really looked like scoring, other than a half-chance late on for Roman Yaremchuk. Austria saw the game through pretty comfortably in the end to claim their place in the last 16.

Man of the Match: Xaver Schlager

This may well have been the game that puts Xaver Schlager on the map. The Wolfsburg man showcased how important the relentless ground-covering, energetic tackler is to Franco Foda’s side. Operating in the right side of central midfield, Schlager has developed a strong partnership with Florian Grillitsch in the middle of the park. Schlager played more advanced, combining with Marcel Sabitzer and Konrad Laimer, whilst Grillitsch was more conservative and sat in front of the defence. 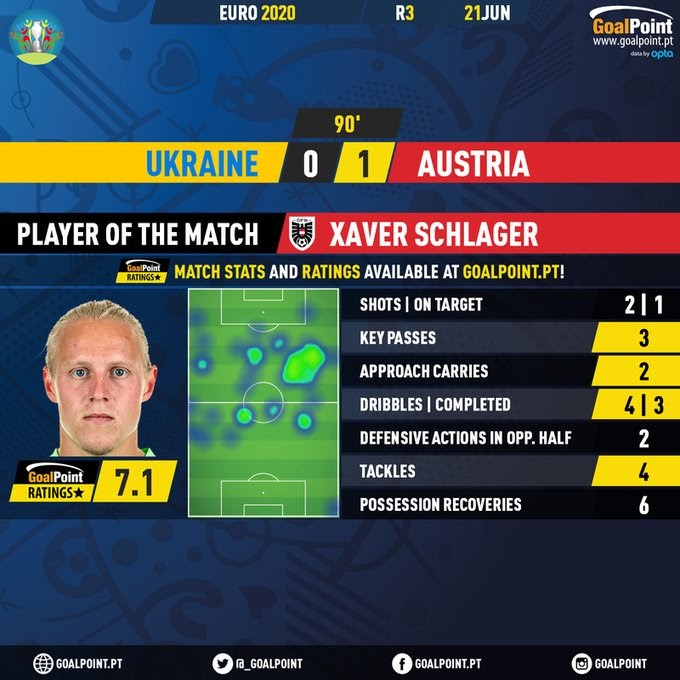 Alongside the likes of Florian Grillitsch and Marcel Sabitzer, Xaver Schlager delivered a dominant display in the center of the pitch for Austria.

In this particular encounter, Schlager usefully contributed both offensively and defensively, registering 3 key passes and 4 tackles. The 23-year-old recovered possession 6 times for his team, whilst also completing 3 dribbles out of an attempted 4. Physical and composed, Schlager won almost every duel in the challenge and proved to be the vital cog that kept things ticking for his team. Austria dominated Ukraine in midfield and ultimately won the game as a result of that – Schlager, as well as Grillitsch, are to be praised for that.

Austria will meet Group A winners Italy on Saturday, which will put an end to their 67-year wait for a knockout tie at a tournament. Foda will be hoping for more of the same from his players if they are to have any chance of overcoming the highly-fancied Italian side, who have yet to concede a goal so far at the tournament.

Ukraine, on the other hand, must now anxiously wait if their victory over North Macedonia last week is enough to rank them as one of the top third-place teams to progress. In the meantime, manager Andriy Shevchenko will be mulling over his attacking options if he wishes for a more inspiring performance – if their European campaign does continue.

Franco Foda returned again to use his favorite shape 4-2-3-1 after he used 3-1-4-2 in the previous two games against North Macedonia and the Netherlands, respectively, which did not bring the desired fruits, especially against the latter, Florian Grillitsch was the newcomer in the lineup where he played as a lone pivot in the middle, while Marko Arnautović returned to the start lineup after he missed the game against Netherlands due to suspension.

In possession, Austria went for 2-1-4-3 with Xaver Schlager and Marcel Sabitzer occupied the half-spaces, Konrad Laimer Christoph Baumgartner hugged the sidelines to stretch the field with Arnautović filling the central space, while giving Grillitsch giving the team more several options and great flexibility. Austria aimed to create a numerical overload in front of Ukraine’s 4-5-1 defensive shape in two areas, the first area in front of Ukraine’s first pressing line and the second at the right flank and then using that to reach the central space. 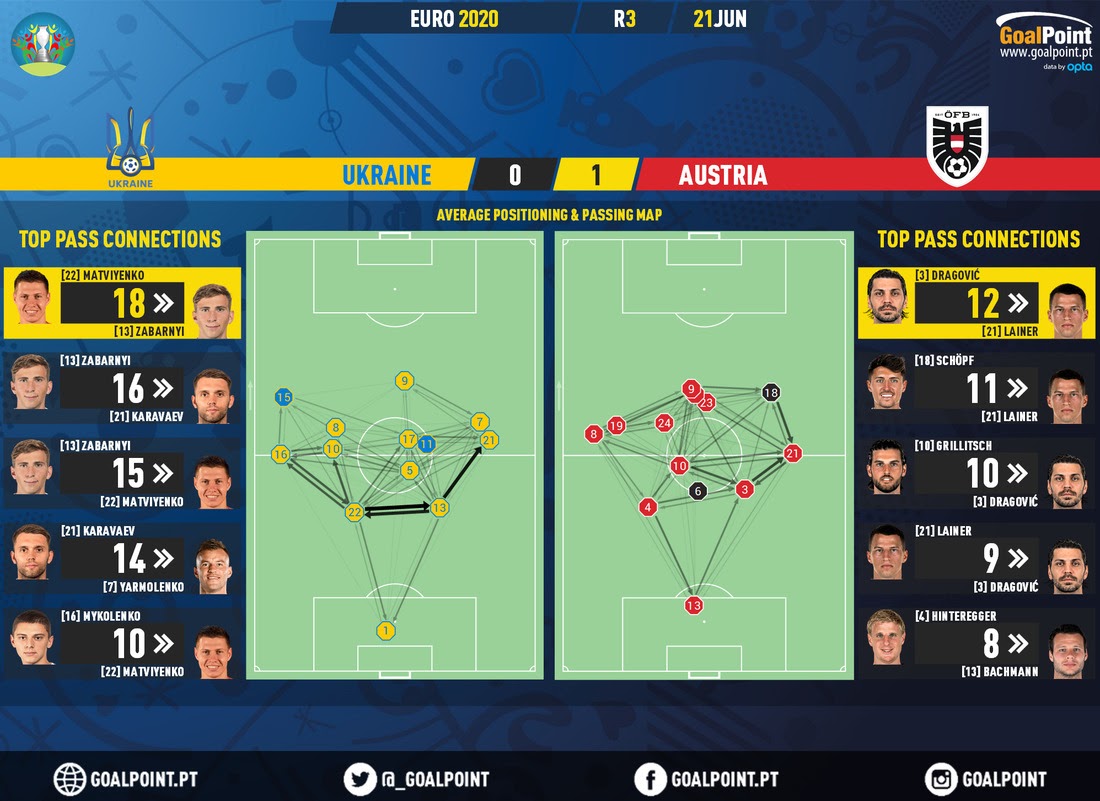 In the first area, Grillitsch would fall between the central defenders to create a 3 VS 1 situation in front of Roman Yaremchuk and then start passing to one of the central defenders and thus one of Ukrainian’s central midfielders was forced to climb up and press the ball carrier, as a result, he left the half-space empty behind him so it would be easy for Schlager or Sabitzer to fall there and receive the ball.

In the second area, the team made triangles on aspects, especially on the right flank, in order to create a 3 v 2 situation, where the team used an asymmetric structure by turning Stefan Lainer into a right central defender, while Alaba pushed high up the field on the left side. Austria’s average position clearly reflects this, with the top pass connection between Aleksandar Dragović and Stefan Lainer.

Schlager’s role was so important, making Austria comfortable in possession, he was smart in positioning and choosing the appropriate positions, especially in the right half-space, where he made Ukraine’s left back constantly confused between staying with him or going towards Laimer down the flank, which gave his teammates additional passing options.

The spread of Austria players in possession also helped them in the ball recovery process at advanced areas immediately after losing it, especially with the help of Grillitsch, where four players formed a square shape in a narrow space to shut Ukraine’s counter-attack down. 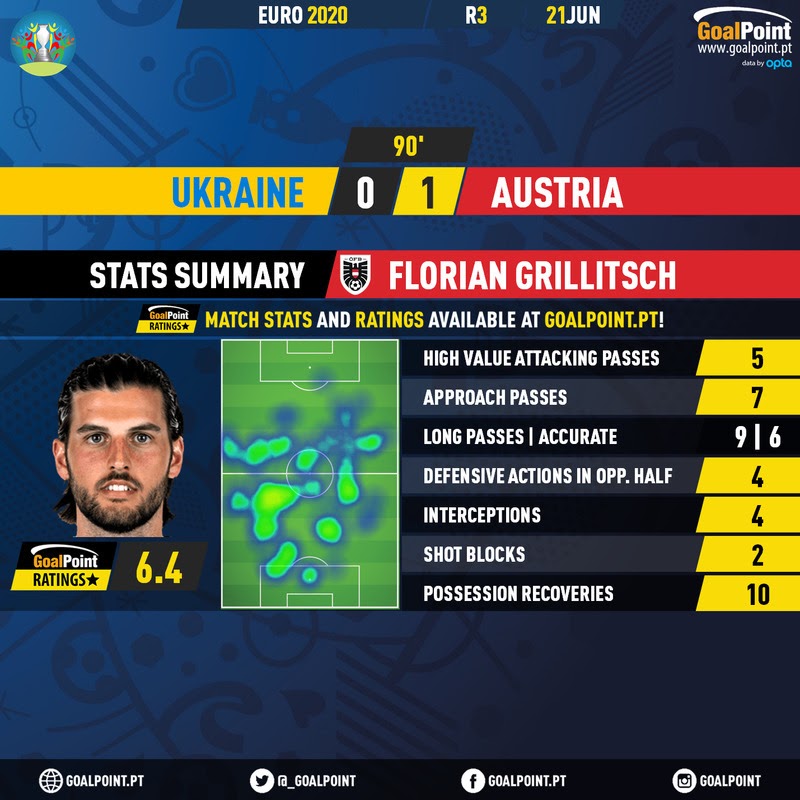 After being relegated to benchwarmer status in the first two matches, Florian Grillitsch put in an impressive display in midfield and proved why he should be starting against Italy in the Round of 16.