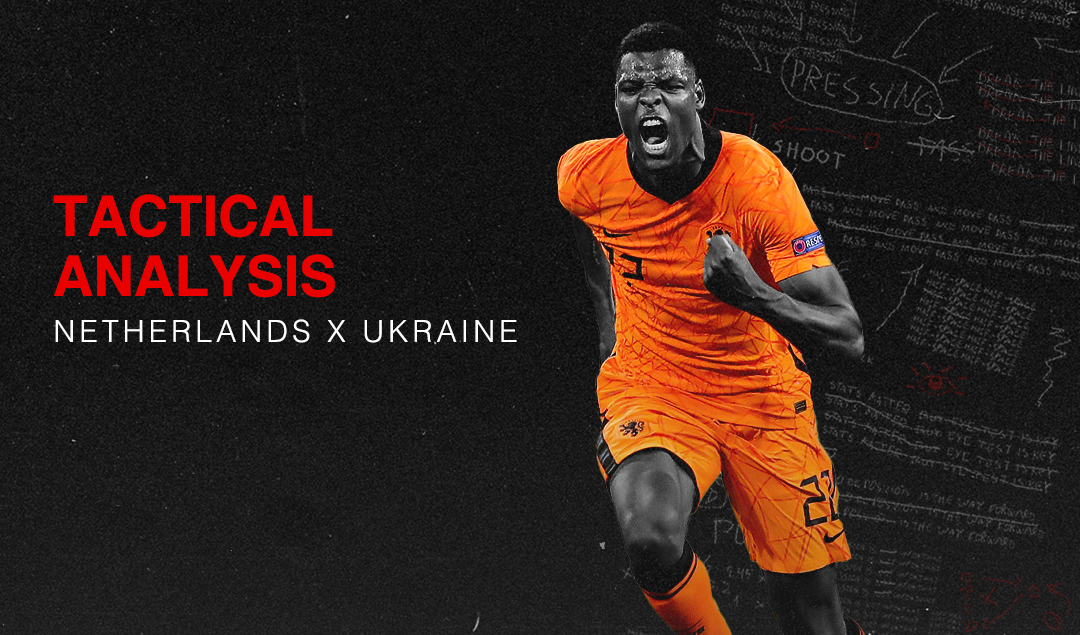 As the Dutch national anthem rang out in front of the 16,000 fans packed inside the iconic Johan Cruyff Arena in Amsterdam for the Onsoranje first match of Euro 2020, both Ronald De Boer’s men and Ukrainian legend Andriy Shevchenko’s Ukraine side did not disappoint in a 5 goal thriller. The action started right from the get-go with end-to-end football showcasing itself in all its beauty from the first 5 minutes.

Georginio Wijnaldum’s finesse and the pace and power of Denzel Dumfries down the right-hand side caused the Ukrainians major problems which were first exposed from the PSV fullback’s shot which was well saved by Heorhiy Bushchan. Whilst the Ukrainians found themselves in some dangerous positions in the early stages of the first half, the second quarter of the match looked different.

The Netherlands dominated the ball and key chances, with Frenkie de Jong and Gini Wijanldum pulling the strings to a lively Memphis Depay who did all but score in the first half. The constant probing and dominance of the dutch would soon pay off in the 49’ minute where a wicked ball in from Denzel Dumfries was parried out only to the feet of an ice-cold Wijnaldum, who slotted coolly away for the opener in Amsterdam.

This effort was then quickly doubled by Wout Weghorst, a man in-form to make the score 2-0 to the Dutch. With hands on their heads, the match seemed to be over for the Ukrainians. While the Ukrainian talisman were missing for ⅔ of the game, Andriy Yarmolenko, the Second top goal scorer in Ukrainian history (after his manager), in the 75’ minute cut inside onto his wand of a left foot and struck it past an aging Maarten Steklenbuurg in goal and the comeback was on. A freekick in the 78’ minute an ace delivery from Atalanta star Ruslan Malinovskyi, was slotted home by Roman Yaremchuk, and the comeback had seemingly been complete.

As all seemed poised for a draw, Dutch spirit and resilience found another way to break down the Ukranian rear guard, yet in a fortunate way with a lapse in concentration from goalkeeper Bushchan, a Nathan Aké cross was met with a Cristiano Ronaldo-esque leap from Denzel Dumfries to secure the 3 points for the Netherlands in the 86th minute, breaking Ukrainian hearts right at the death, seeing the Dutch joint first behind Austria on goal difference in Group C.

Man of the Match: Georginio Wijnaldum

Though there were arguably many stand-out performers for the Dutch, the work ethic and game management alongside the goal from Geoginio Wijnaldum made him MOTM. Wijanldum’s constant press on the ball, and his ability to be ice cold in front of goal put the Dutch at ease with the opener, settling the nerves of fans who were seeing a dominant side fail to score. 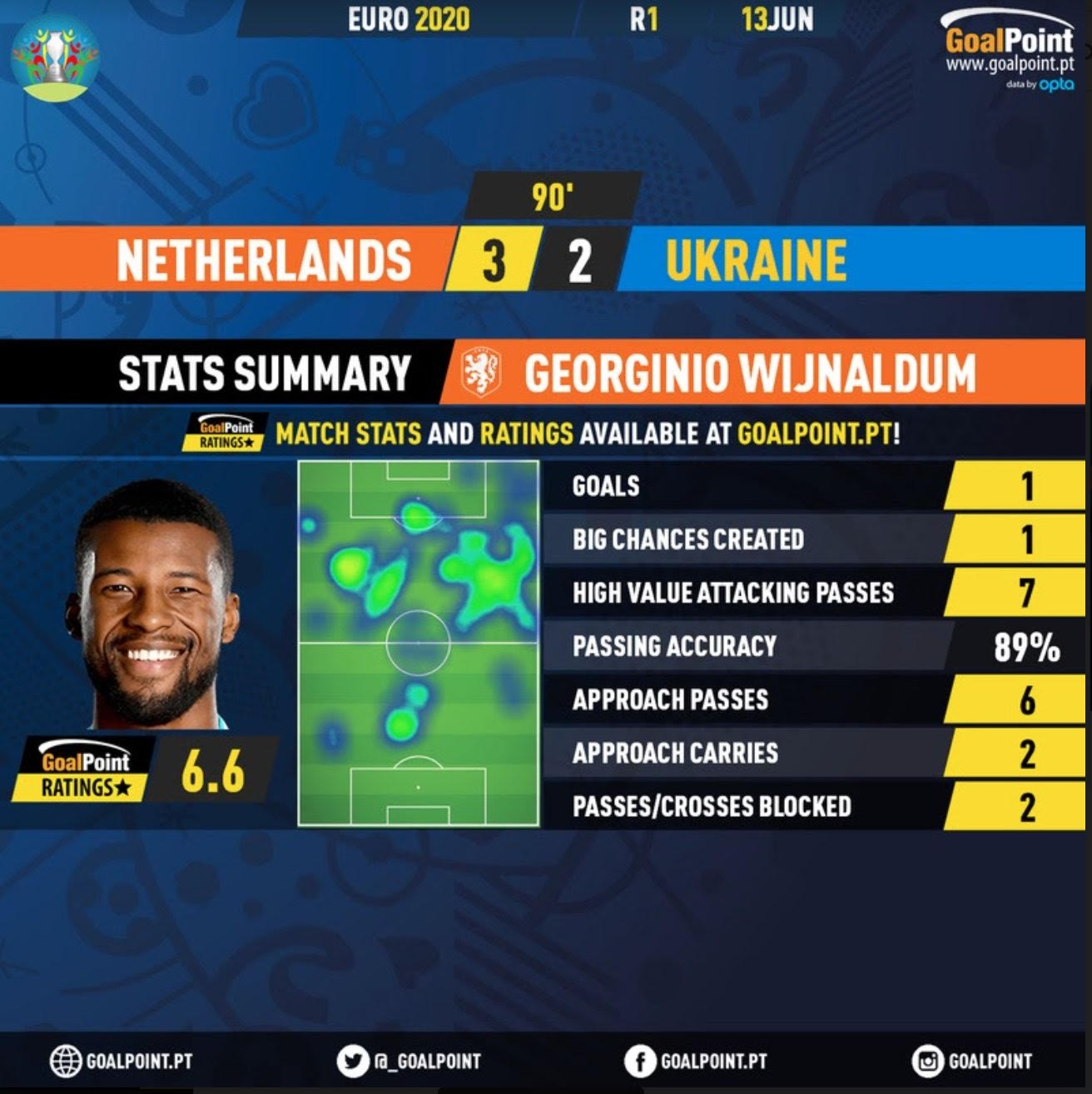 Days after being announced as a new Paris Saint-Germain player, Georginio Wijnaldum delivered a performance worthy of the reported €10 million annual salary after tax that he will be earning in Paris, and worthy of the captain’s armband as well.

The Dutch captain’s pressure on the ball to push the Ukrainians into forcing errors particularly in midfield, intertwined with his precision on the ball, made him a constant menace for the Yellow and Blue men. With 89% pass possession throughout the game, the work ethic and technical flair shown by Wijnaldum can correspond with the work of Jürgen Klopp whose relationship with the midfielder has blossomed over recent years, which was shown in full effect in Amsterdam.

Alongside Wijnaldum the performances of both his midfield teammates in Marten De Roon and Frenkie De Jong aided the Dutch with honest efforts which saw the Dutch overrun the Ukrainians in midfield. Most notably De Jong who turned defence into attack effectively for the Dutch receiving the ball from Daley Blind over 21 times, to then play it forward to Memphis Depay 16 times representing the forward-thinking nature of De Boer’s men.

While the Dutch carry the momentum going forward with the wind in their sales for their match against Austria on Thursday, the Ukrainians can also take positives going into their match against North Macedonia on the same day. Goals from both Andriy Yarmolenko and striker Roman Yaremchuk and the fighting spirit shown by the Ukrainians against a highly rated Dutch team should fill the Eastern Europeans with much confidence progressing through the tournament.

As for the Dutch, 3 goals in front of home fans in Amsterdam put the team in good stead going forward, yet manager Frank De Boer will want to assure up the defence going forward as on another day the result could have been looking far less rosy, against better opposition with all due respect.

Biggest Issues for the Ukrainians

Whilst the match ended 3-2 in favour of the Dutch which in the grand scheme of things presents a fair depiction of the game, though harsh the mistakes made by Ukrainian Goalkeeper Heorhiy Bushchan may have cost the Ukrainians more than their poor performance.

The 85’ minute mistake from the Dynamo Kyiv keeper to not clear the ball, to rather pass without judgement to Owen Wijndal which led to the third and final goal from Denzel Dumfries which Bushchan on another day would have saved came from an easy error which was avoidable but ended up being so costly in the match ultimately resulting in a loss.

Whilst Bushchan saved some decisive shots notably from Gini Wijnaldum and Denzel Dumfries on either side of halftime, his lapses in concentration in the third and also the first goal tipped the game in great favour of the Netherlands who profited on both occasions.

Though the Ukrainians played a backs-to-the-wall performance for large parts of the game, for the first time in the tournament, this side went on the score and level the game, yet only to concede via lack of concentration and game management which cost dearly in tournament football.

Having said this, Heorhiy Bushchan’s ability to keep out Memphis Depay, Denzel Dumfries and Georginio Wijnaldum at key points can sum up the dominance of the Dutch side. Atalanta star Ruslan Malinovskyi’s lack of impact on the game, considering he is one of Ukraine’s brightest players the inability for the technically gifted midfielder to get into the game showed accordingly with his performance against the Netherlands. 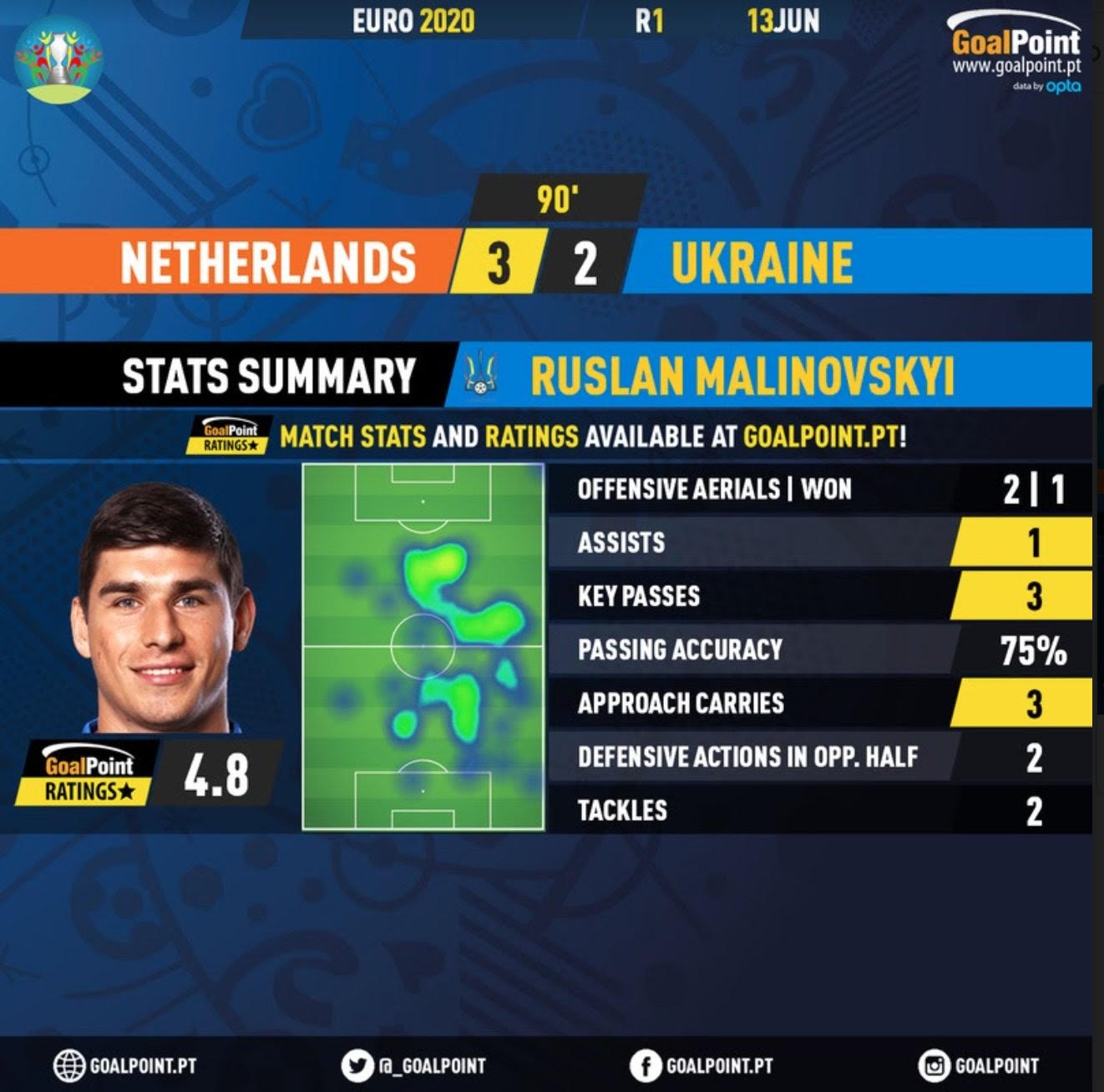 Ruslan Malinovskyi was expected to be the main difference-maker for Andriy Shevchenko’s side, but the Atalanta midfielder struggled to meet the occasion against the likes of Frenkie De Jong and club teammate Marten De Roon.

Though getting an assist for Yaremchuk’s goal in the second half, Malinovskyi’s ineffectiveness going forward in open play showed greatly with just 2 key attacking passes and ¼ of the Atalanta star’s passes being off-target.

The Ukrainians will hope that Ruslan, who will play an integral part of the Ukrainian set-up in the upcoming group games, can perform far better than against the Dutch. The quality is visibly there to see via the set-piece delivery for Roman Yaremchuk, however, if Ukraine are to go far into the tournament, a firing Ruslan Malinovkyi will be mandatory for Yellow and Blue success.