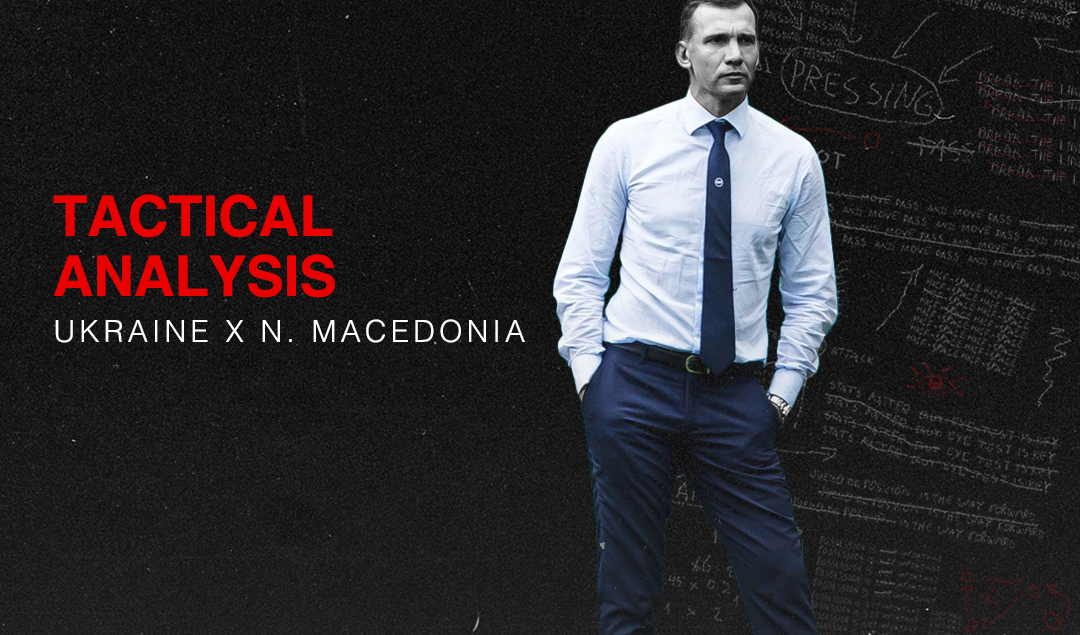 With both teams fresh off tasting defeat in their first game of Euro 2020, there was much to play for in this encounter in Group C. Andriy Yarmolenko and Roman Yaremchuk became the first ever duo to both score in each of their side’s opening two matches at a single European Championship, having both found the net in Sunday’s loss to The Netherlands.

Early signs were promising for Ukraine, as pressure mounted on North Macedonia’s goal. However, Ukraine were indecisive in the final third, particularly when Yaremchuk weirdly tried to square a pass while 1v1. Yet a goal would come courtesy of their captain, Yarmolenko, who ghosted in on a corner for an easy tap-in. It was soon 2-0 in the 34th minute, as Yarmolenko played in Roman Yaremchuk, who duly obliged with a calm finish past a helpless Stole Dimitrievski.

A couple of second-half changes would inspire a better performance by North Macedonia, as they pulled a goal back through Ezgjan Alioski, hitting home the rebound of his saved penalty. More drama ensued late on, as a penalty was awarded to Ukraine. With what has become the theme of Euro 2020, Ruslan Malinovskyi’s penalty was saved, the fourth miss this summer. This proved to be the last action of a drama-filled game.

Man of the Match: Andriy Yarmolenko

Another seemingly effortless yet inspired performance by Andriy Yarmolenko, without a doubt was the difference maker between the two teams as he opened the scoring and soon provided the all-important assist for the second goal.

Throughout his international career, he has proven time and time again to be unfazed as the go-to man for Ukraine. He now only lies 6 goals behind Schevchenko’s record of 48 goals for The Yellow & Blue and could soon surpass the tally if he keeps his prolific form in front of goal. 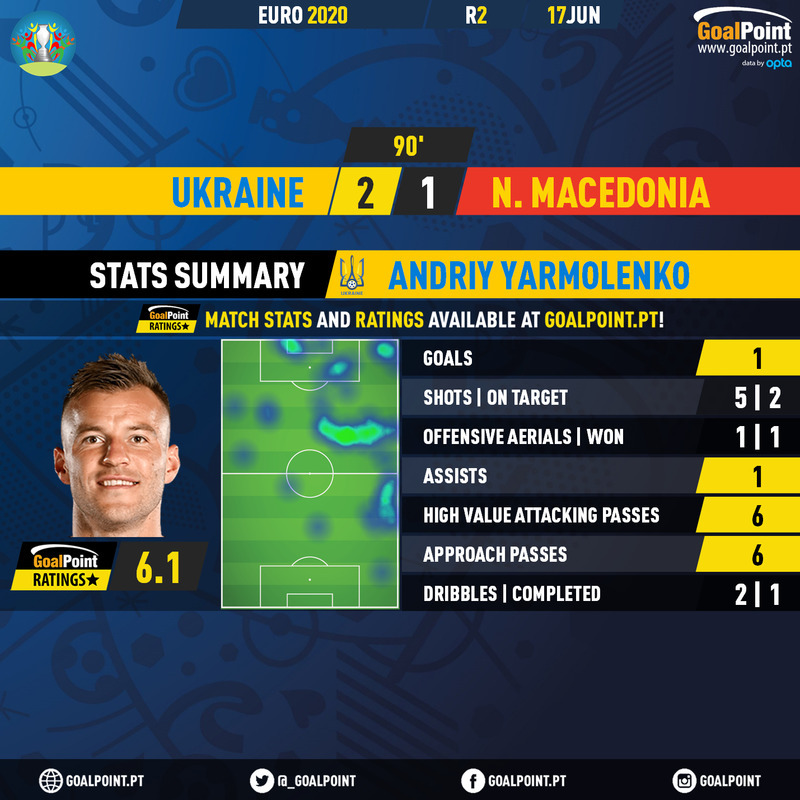 Andriy Yarmolenko would often move inside to link up with Roman Yaremchuk and occupy the North Macedonian defenders.

His link-up with Roman Yaremchuk and Ruslan Malinovskyi was fantastic throughout the first half. Though North Macedonia would limit his influence in the second 45, ultimately seeing him be subbed off midway through second half, his impact on the game was vital. He had 5 shots in just 70 minutes of football, with Ezgjan Alioski and Visar Musliu unable to stop him from moving on to his left foot.

His passing was fantastic too. Not only did he assist Yaremchuk’s goal with a brilliant first-time through ball, but he also completed 6 high-value attacking passes. Perhaps helped a little by North Macedonia’s defending, he was consistently able to drop inside and find space to receive a pass and influence the game.

With their fate all but sealed after a second successive loss in their first tournament, North Macedonia can hold their heads high if they’re to be knocked later today. They’ve made a good account of themselves and all signs are positive for improvement looking into the future with the likes of Elif Elmas and Enis Bardhi still yet to hit their prime.

On the other hand, after claiming only their second victory in European championship history, Ukraine will look to build on an encouraging result and hopefully progress into the next round as they face Austria in their final group game.

A Disastrous Back Three

With more shots, dribbles, and possession, it is tempting to look at this game as Ukraine-domination. However, their victory was ultimately enabled by a disastrous first half defensive set-up from North Macedonia. Lining up in a back three of Stefan Ristovski, Darko Velkovski, and Visar Musliu, manager Igor Angelovski clearly attempted to shut out Ukraine, but it backfired massively.

Ukraine were aggressive, with their midfield of Oleksandr Zinchenko, Taras Stepanenko and Mykola Shaparenko attempting 9 tackles between them in the first half. Once the ball was won by Andriy Shevchenko’s side, the Macedonian wing-backs were caught high up the pitch, and a pipeline of quick vertical passes allowed Ruslan Malinovskyi, Andriy Yarmolenko and Roman Yaremchuk to isolate the defence in a 3v3. 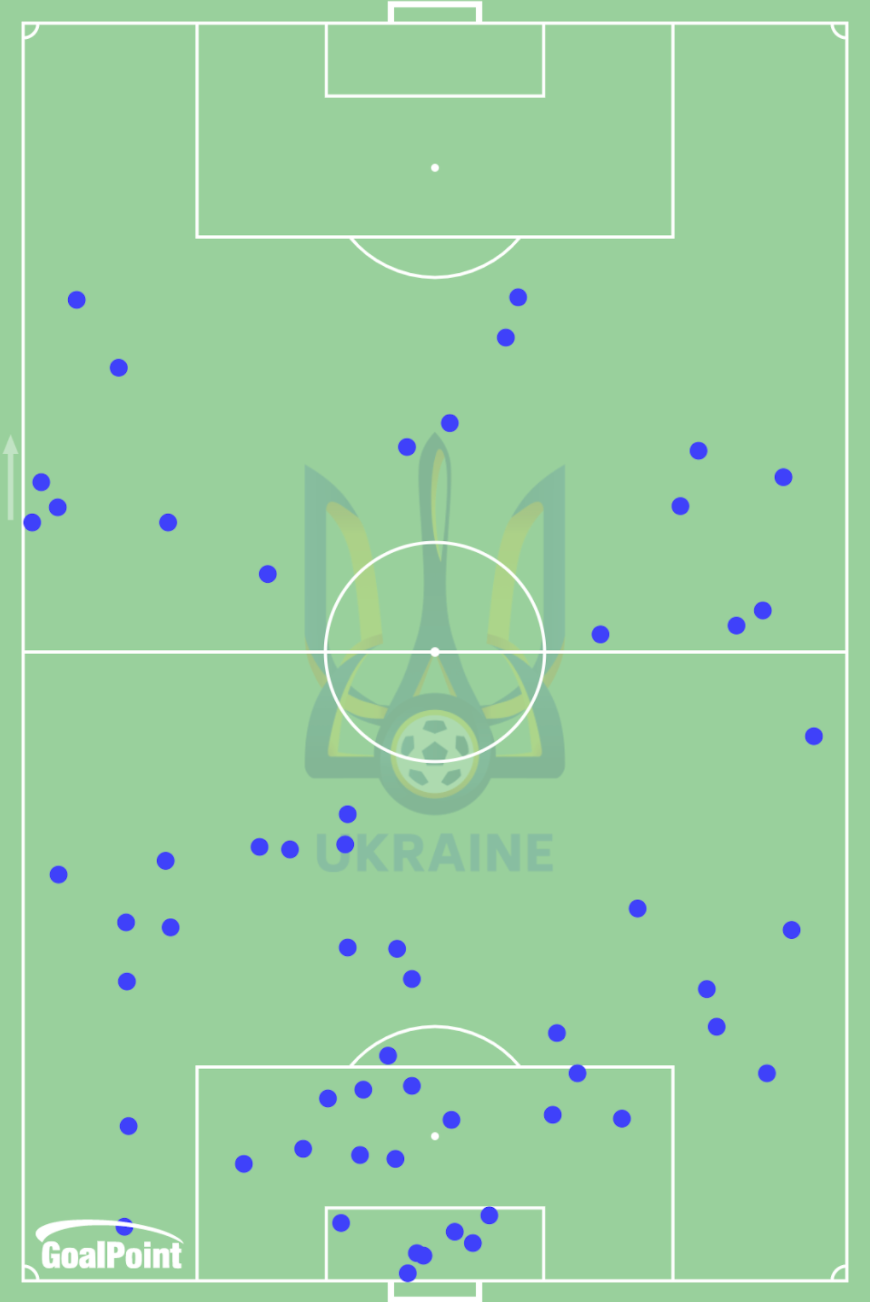 Ukraine attempted 17 tackles in North Macedonia’s half, with over half of them coming inside the first half.

The Yellow & Whites had 9 shots in the first half alone, with Roman Yaremchuk continuously peeling off the last defender to latch on to through balls. This pattern of play is what won Ukraine the corner which led to Yarmelenko’s opener, and to Yaremchuk finishing the second of the match.

The Gent attacker even looked surprised at how easy it was to peel off Velkovski and face Stole Dimitrievski 1v1. Not only did the back three hinder North Macedonia defensively, but they were overloaded in midfield, seeing them maintain just 37% possession in the first half.

With Ukraine in cruise control at half time, this looked set to be one of the more boring games of Euro 2020. Thankfully though, Igor Angelovski made 2 changes for North Macedonia, bringing on two midfielders in Darko Churlinov and Alexander Trajkovski. Their shape changed from a 3-5-2 to a 4-3-1-2. It was a bold attacking move, and it’s what almost brought the Macedonians their first points in major international football. 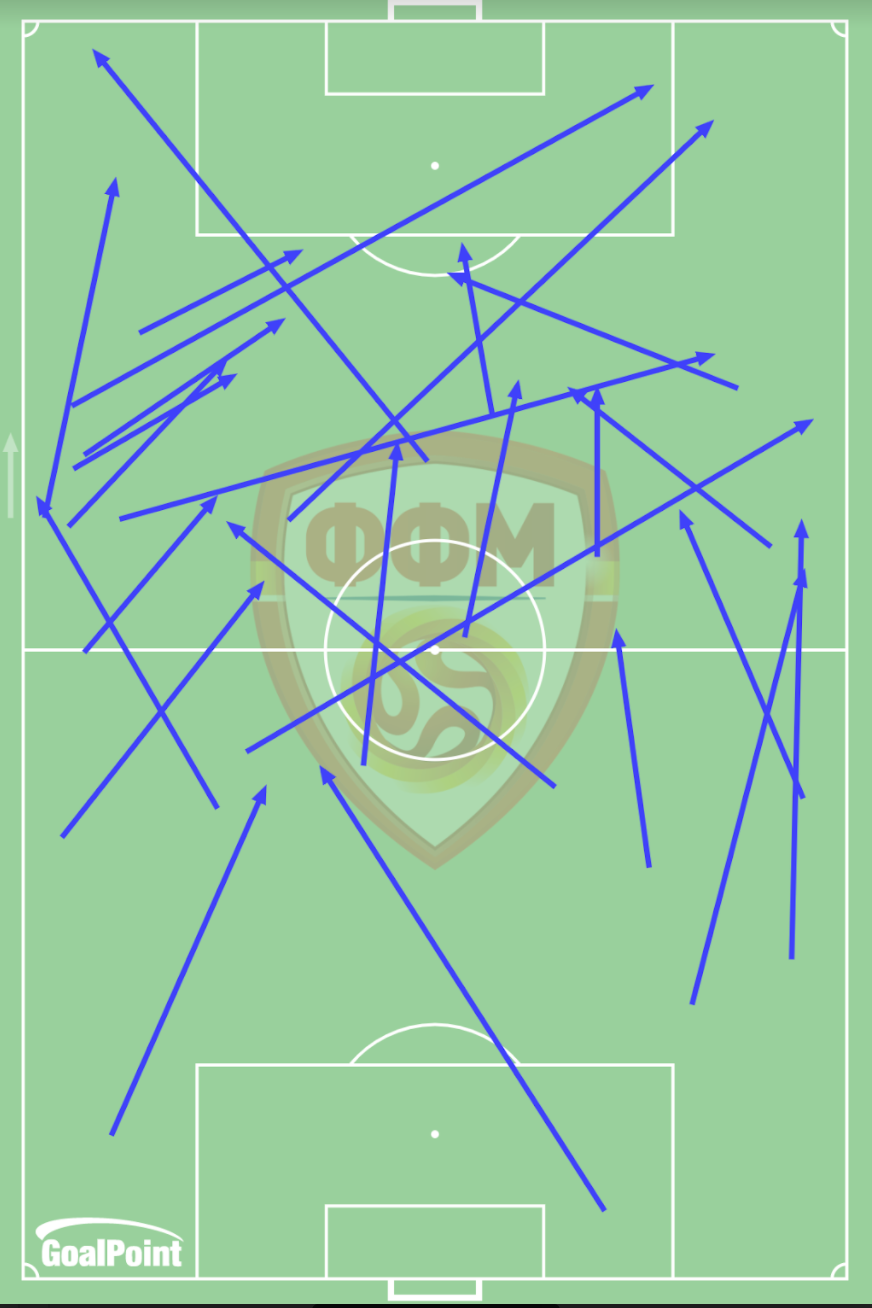 Ukraine Vertical (Forward) pass map (Passes over 25 yards). Ukraine’s verticality was superb in the first half but hugely limited in the second after North Macedonia’s switch up.

With another body in the centre, North Macedonia were able to block the vertical passes that had been so damaging in the first half. This forced Ukraine’s front 3 to drop deeper to help out in midfield, as Shevchenko switched into a 4-1-2-1-2 for long periods of the second half.

North Macedonia hit off 10 shots and averaged 60% possession in the second half. They controlled the last 45 minutes, seen in the lead up to their penalty where 3 red shirts boxed in Ukraine in their own 18-yard-box. While North Macedonia did not manage to find an equaliser, they changed their tactics and created one of the best matches of the tournament so far.