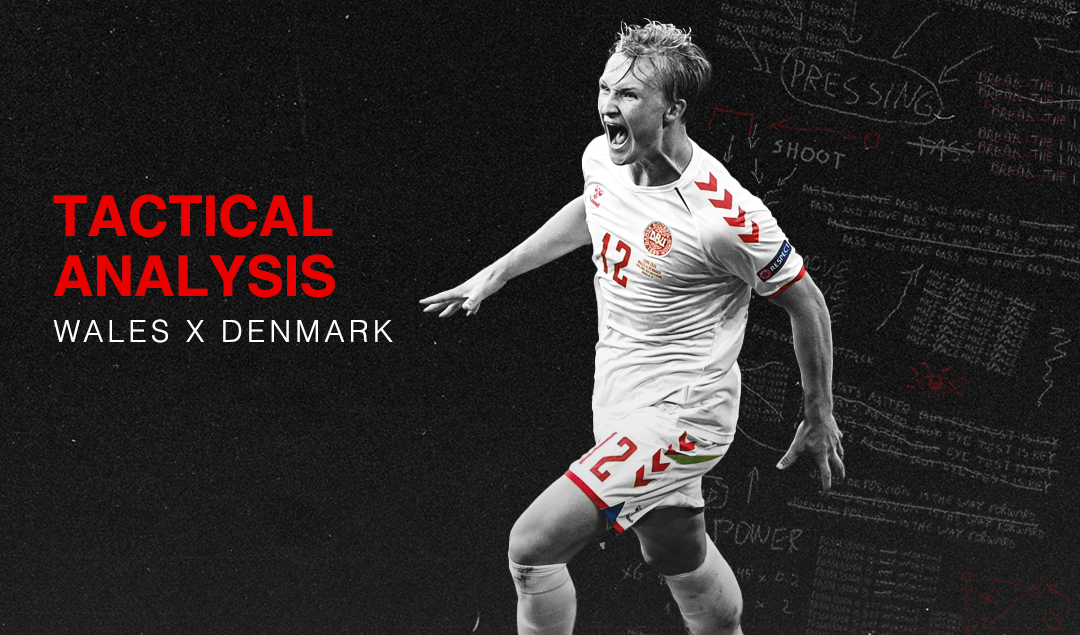 Denmark continued their inspiring run through Euro 2020 on Saturday evening with a commanding 4-0 win over Wales. Two goals from Kasper Dolberg, followed by late goals from Joakim Maehle and Martin Braithwaite gave the Danes plenty of confidence as they cruised into the quarter-finals of the competition.
It was Wales who started the brighter of the two sides, controlling most of the possession and fashioning the first few looks at goal. Welsh captain Gareth Bale went closest for his side after 12 minutes, narrowly firing wide of Kasper Schmeichel’s goal.

The deadlock was broken on 26 minutes thanks to Kasper Dolberg’s wonderfully curled effort into the bottom corner. After some neat link-up play between Mikkel Damsgaard and Dolberg, the 23-year-old gave the outstretched Danny Ward no chance to give the Danes a 1-0 lead. Denmark kept their foot on the gas and went close twice before the break, forcing Ward into a good save on Dolberg from close range, before Maehle fired into the side netting moments later.

With 45 minutes to save their tournament, Wales came out sluggish and were made to pay just minutes into the second half. Neco Williams’ dreadful clearance from Martin Braithwaite’s cross fell to the feet of Dolberg, who made no mistake from 6 yards out for his second goal of the game. Wales struggled to get themselves back into the game after Denmark’s second goal, and were limited to mostly half chances. Joe Allen connected well with a volley with half an hour remaining but it was always rising over the crossbar.

Denmark almost grabbed a third with five minutes remaining, substitute Joachim Andersen struck the post before Braithwaite’s effort on the rebound rolled just narrowly wide. They eventually did grab the third goal of the game on 88 minutes, thanks to a wonderful near-post finish from Joakim Maehle.

Harry Wilson saw red in stoppage time, cynically bringing down Maehle from behind to end a disappointing day for Wales but Denmark weren’t done heaping misery on Wales as they made it 4-0 deep into stoppage time through Martin Braithwaite.

Man of the Match: Kasper Dolberg

Kasper Dolberg had fallen off the way a little coming into Euro 2020 and couldn’t force his way into the starting lineup for any of Denmark’s group stage games. For their Round of 16 matchup against Wales, he found his name on the teamsheet and it paid dividends. 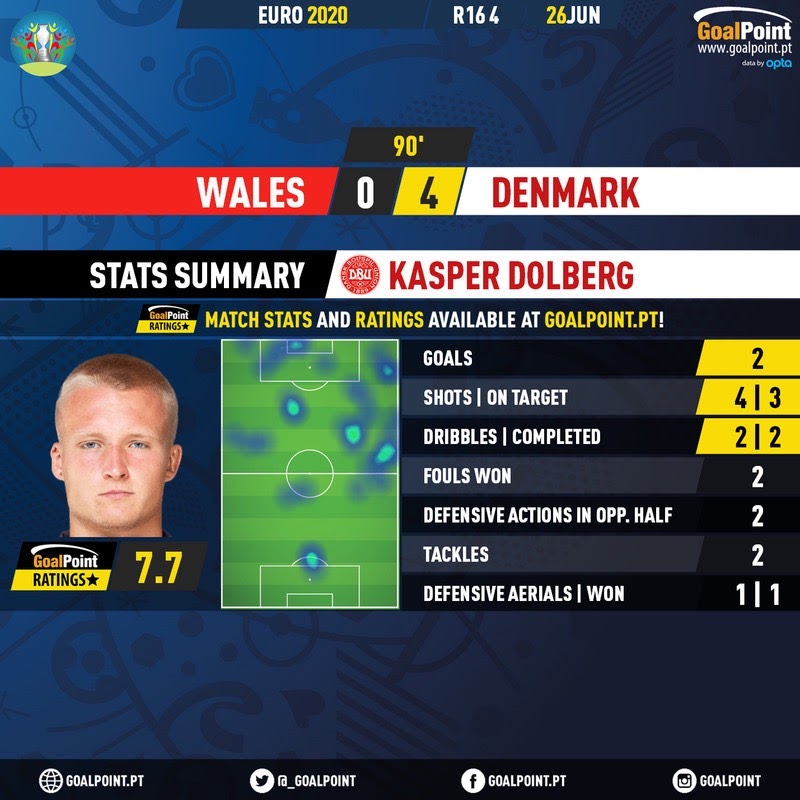 After sitting on the bench in the first three games, Kasper Dolberg replaced the injured Yussuf Poulsen and thrived against Wales, deftly getting Joe Rodon booked and grabbing a brace to put Denmark through to the next round in Baku.

His opening goal was one for the books, a beautiful curling effort that nestled into the bottom corner. Dolberg secured his man-of-the-match performance with a 2nd goal just after halftime, a simple finish from close range. It was a complete centre-forward performance from Dolberg, and one that will be huge for the 23-year old’s confidence after his ups and downs of the last couple seasons.

Mikkel Damsgaard deserves plaudits for his performance as he once again held the task of being Denmark’s most creative player, pulling the strings for them, but it was Dolberg who got the Danes running with his brace and they never looked back.

It was a well-marshalled performance from Denmark, and quite a comfortable one after a shaky first 15 minutes. The Danes move on to the quarter-finals to face either Czech Republic or the Netherlands, and will fancy their chances after two consecutive dominant performances. They’ll look to capture the magic of that famed Euro 1992 Denmark side that won it all.

Wales will be disappointed in their performance after what many deemed an impressive group stage run. A bright start couldn’t be maintained and they were simply outclassed on the day.

Kasper Hjulmand went with 3-4-2-1again after he used it in the previous two games against Belgium and Russia, respectively, there were two changes compared with the lineup that he picked up against Russia, where Jens Stryger started as a right wing-back, while Kasper Dolberg was in the striker position instead of Yussuf Poulsen, who wasn’t ready to start.

Denmark didn’t start with a man-marking pressing system like they did a few days ago, but they tried to absorb Wales’ enthusiasm by using a 5-2-3 shape while defending with a medium block, attracting Wales to their areas and then playing long balls to the attacking trio in central spaces but they lacked accuracy in the beginning.

The main problem that Denmark faced during the first 15 minutes was their struggle to deal with the Wales midfield trio, where they always found themselves in 3v2 situations, allowing Aaron Ramsey to move freely through the middle third. As a result, Mikkel Damsgaard had to go inside to help Pierre-Emile Højbjerg and Thomas Delaney, giving Gareth Bale space down the right flank with Joakim Mæhle got busy with Connor Roberts on the sideline. 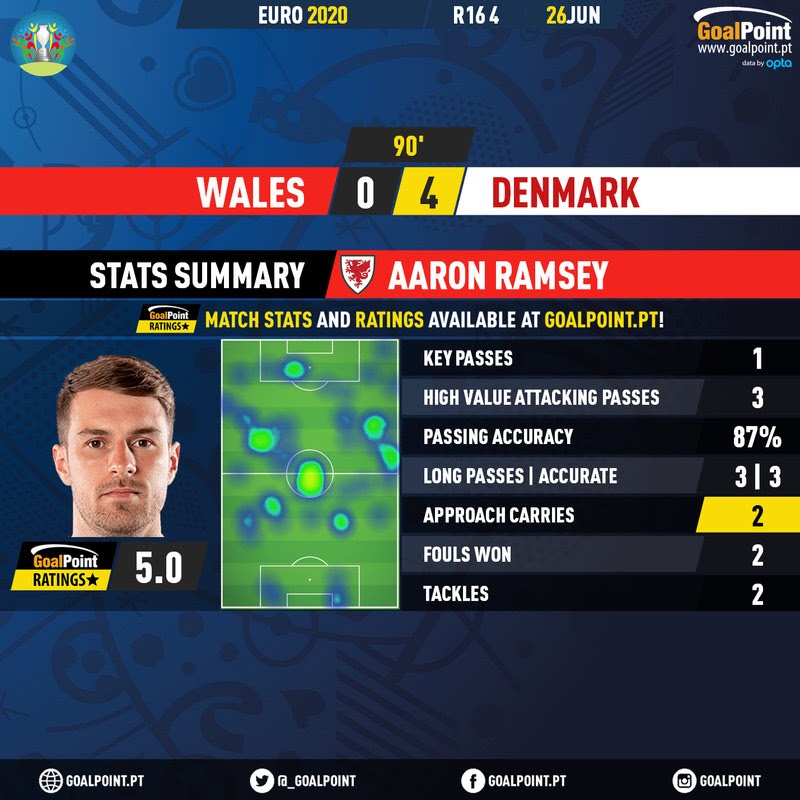 In the first 15 minutes, Aaron Ramsey’s movements reflect his freedom in the offensive third and then he was forced to fall into the first third to provide help.

Hjulmand realized it quickly so he asked Andreas Christensen to move from the right CB position to defensive midfielder to create a numerical equivalence there and then changed his formation to 4-3-3. Since then Denmark managed to dominate the game, where one of their trio midfielders was falling next to CBs to create overload over Wales’ attacking trio with one of the full-backs stayed while the other pushed high up the field, which gave them a huge numerical overload on aspects.

Denmark then returned to using their usual position-oriented man marking pressing with a 4-1-4-1, trying to narrow their block as much as possible and forcing Wales to make wrong decisions. As a result, they got the ball in advanced areas or forced them to make long passes.

In possession, Denmark were brilliant as they were distinguished by fluidity and flexibility. They always aimed to exploit the space in the inner corridors by creating an overload on aspects and off-the ball moving, it started when one of the CBs passed the ball towards the full-backs on the sidelines, which forced one of Wales’ CMs to go there and press on him.

One of the two wingers began to move down the flank to get Wales’ full-back busy while the other drops into the half-space to get CM out of position and started to link up with the full-back, then one of Højbjerg or Delaney moved in the inner corridor while Dolberg stayed in the central space with the other full-back stretched the field horizontally. 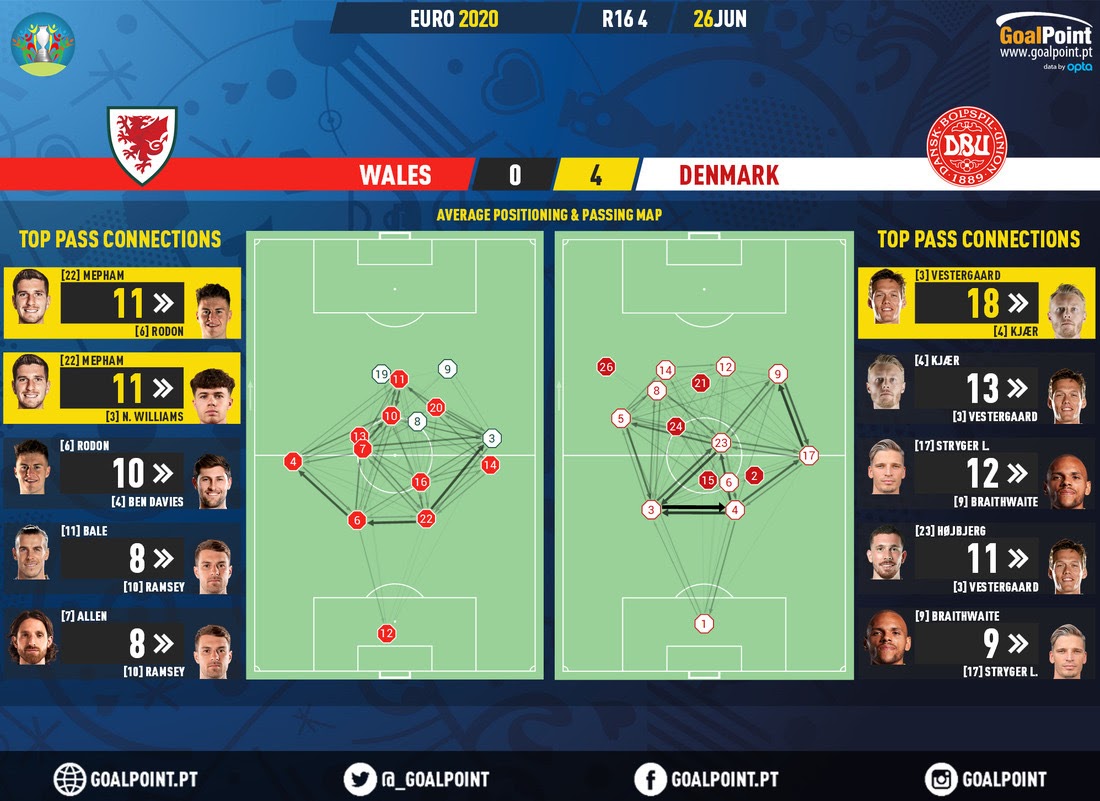 Thomas Delaney’s role in attack was clear, especially with the defensive coverage provided by Christensen behind him in the middle.

The first goal actually reflects the creativity of the Danes in possession, the goal started from Christensen’s pass to Jannik Vestergaard at 25:34, while the ball settled in Wales’s net at 26:30. 17 magical passes were enough to take the lead. It began with the two wingers occupying the half-spaces while Delaney sneaked between the lines.

Christensen and Højbjerg formed a 4+2 shape with CBs, then Delaney fell deeper to provide help giving Mæhle freedom on the left. Damsgaard tried to move between the lines until the moment Dolberg fell to the left side to get Wales’ CB out of position, giving Damsgaard enough time to receive the ball on the left half-space, the rest was a creative touch from him and then a high-quality shot from Dolberg.