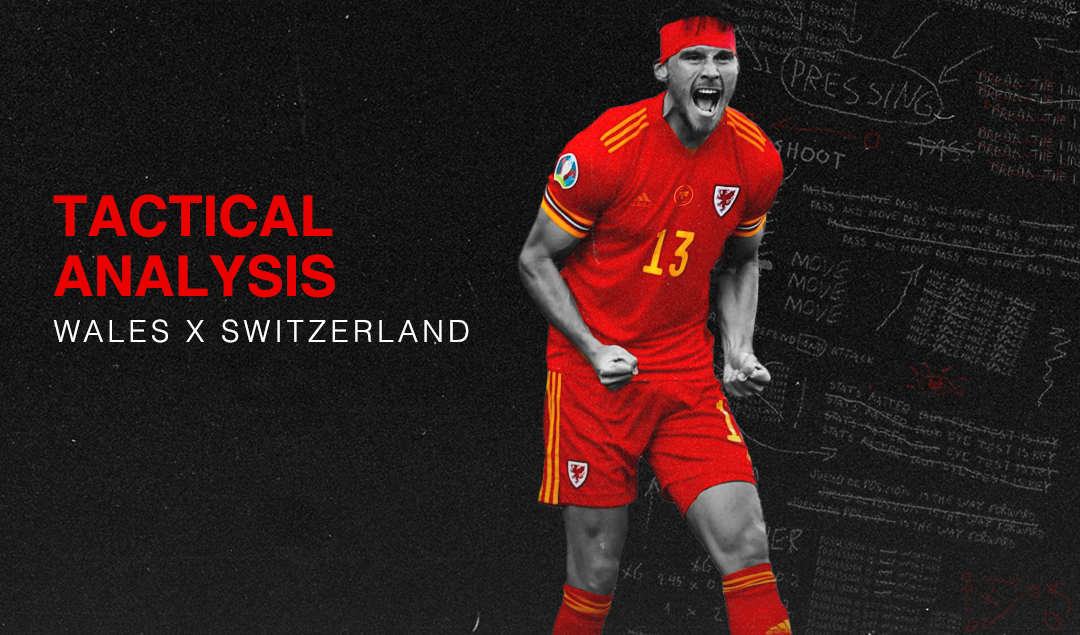 Wales’ record of never having lost a match in which Kieffer Moore has scored continued as the Cardiff man rescued a point in their opening Euro 2020 game. Second-best for the majority of the encounter in Baku, Moore glanced home a header from Joe Morrell’s cross to cancel out Breel Embolo’s early second half goal.

Mario Gravanovic thought he won it late on for Switzerland, seconds after coming on but his close-range volley was ruled out for offside after a VAR check. It was the first draw between the sides but Switzerland will be disappointed they failed to come away with all three points with Seferovic and Mbabu missing presentable chances.

Moore scoring vindicated Rob Page’s decision to restore him to the starting line-up, dispensing with his previous tactic plan of using Aaron Ramsey as a false nine.  Wales will also be indebted to goalkeeper Danny Ward who saved well from Fabian Schaar’s backheel and tipped over an Embolo header in the dying stages.

They had started the better team in the early exchanges with Moore seeing a header brilliantly saved by Yann Sommer but it looked as if they would start their campaign with a defeat until the forward’s intervention.

Man of the Match: Breel Embolo

Breel Embolo looked lively all afternoon for the Swiss, grabbing his first goal at a major tournament when he headed in a Xherdan Shaqiri corner and could have doubled his tally late on only to be denied by Ward. Arguably, the forward, who plays his club football for Bundesliga side Borussia Monchengladbach, should have also had two assists only for strike partner Haris Seferovic and the right wing-back Kevin Mbabu to miss presentable chances either side of half-time. 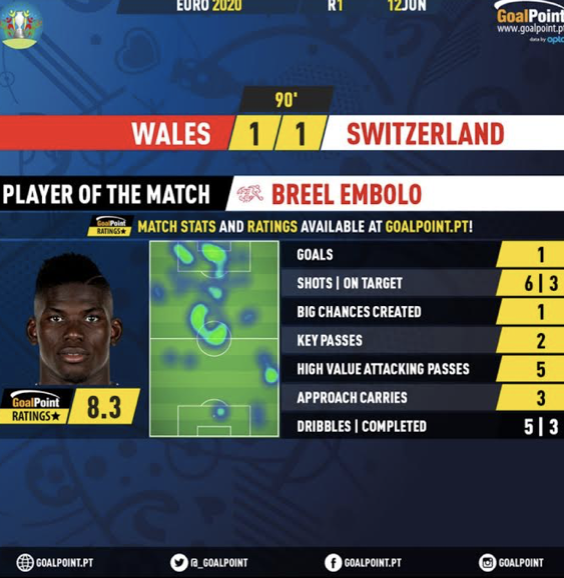 In his third major tournament for Switzerland, the 24-year-old forward delivered a superb display in attack and nearly carried them to victory, coming perilously close to scoring a brace.

According to Goalpoint, the 24-year-old created one big chance (for Seferovic) and made two key passes as he seemed the most likely source of a goal for Vladimir Petković’s side. Completing three of five dribbles, he showed his strength and willingness to run with the ball which created the chance for Mbabu that surely would have sealed a winning start for Swiss.

The forward compliments Seferovic well with his pace and running off the ball offering his side a different outlet in possession. One of his best performances on the international stage will give him confidence for the rest of the competition and came off the back of a disappointing league campaign where he made just 15 appearances for Marco Rose’s team.

The draw means Wales will go into their second match on Wednesday 16 against Turkey with a great chance of securing their place in the knockout stages.  Robert Page, in his first major tournament in charge of his country will be disappointed about the chances Switzerland created but can be pleased with the impact Moore had with the rookie manager’s tactical decision paying off and Dan James, also one of Wales’ main threats with his pace and ability to run beyond the striker, a useful asset.

Switzerland will see this as a missed opportunity given their superiority for the majority of the game and will rue the space in which Moore was left to equalise. They now face Italy in their next game knowing they will need to be more clinical if they are to earn a surprise result.

The Act of Genius

Cardiff City target man Kieffer Moore had been left out of the last 2 friendlies against both France and Albania, but interim manager Robert Page’s strategy to bring the target man back into the Dragons’ lineup proved to be a tactical masterclass with the striker being a catalyst for the successes for the Welsh.

Moore’s ruthless ability to dominate in the air showcased itself particularly via his 75’ minute headed goal. However, this was foreshadowed by his dominant presence and attempt in the first quarter of the match where Swiss goalkeeper Yann Sommer was called into action with a superb save. Page’s ability to soak up pressure and expand the width of the pitch to suit the Welshmen proved to their favour particularly going forward.

The pace of Daniel James and the presence of Kieffer Moore gave the Dragons a source of hope which was predominantly on the counter-attack against the well-drilled Swiss side. Moore’s deadly instinct inside the opposition box saw him have both of the only shots on target for Wales, with one being the goal, moreover defensively Moore’s aerial dominance was also utilised by Page to very good effect with the striker making 4 decisive clearances inside his own box.

With Swiss pressure being exerted arguably most from set pieces – as evidenced from the piercing header from Breel Embolo to make it 1-0 Switzerland, Moore’s physical presence gave the Welsh an upper hand. The decision to use Moore, over a more agile or technical striker in Tyler Roberts, proved to be a tactical masterclass with the decision having a key part in denying Vladimir Petkovic’s disciplined Swiss side from a dominant victory. 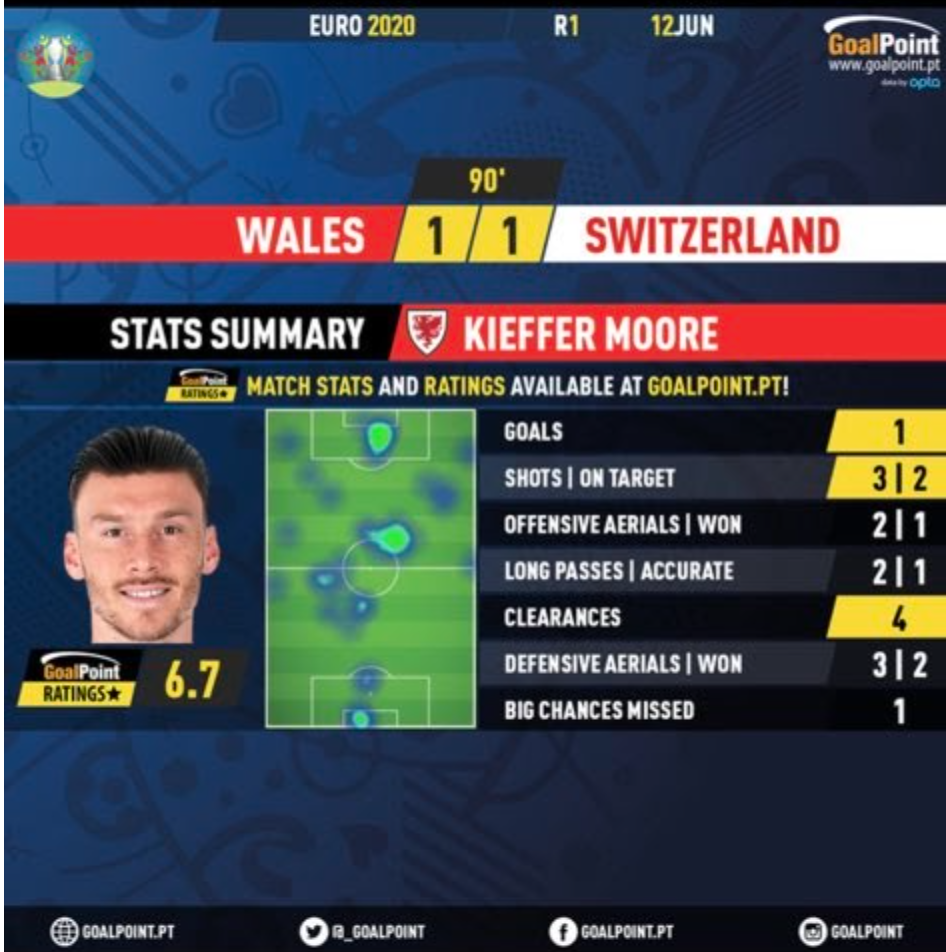 Two years after making his international debut for Wales, Kieffer Moore led the Dragons to a gritty draw against Switzerland with a well-taken header.

The Flop and the Unlikely Hero: Gareth Bale and Daniel James

Whilst Moore was the target man going forward, Page also set up to expand the pitch and make it as wide as possible which was a prevalent feature of the Welsh performance. Width was supplied by Daniel James and Gareth Bale, however whilst all eyes may have focussed on the latter before the match, this proved to be highly flawed with the Real Madrid star underperforming overwhelmingly offering little on the flanks as opposed to his youthful counterpart in Daniel James.

James’ ability to run the flank and use his pace to challenge Kevin Mbabu proved to be a major issue for the Swiss, with James supplying 3 key crosses into the box for Kieffer Moore utilising the strengths of the striker’s frame. Opposed to James, Gareth Bale’s lack of threat on the flank is shown on the heat map where Bale’s ability to dominate the wing was lacklustre compared to James.

Typified by the pragmatic performance by Wales, more was expected of Bale, however, in reality with just 2 high value attacking passes, Bale’s threat was nullified by Petkovic’s men and the tactical nouse of Ricardo Rodriguez and the physicality of Borussia Dortmund defender Manuel Akanji.

Whilst Wales played an archetype of a ‘backs to the wall’ performance in Baku, they were counting on their talisman and captain to supply tantalising counter attacks, however though this didn’t occur, Daniel James held the attacking threat to see Page’s men hang on to the priceless point against the Swiss which they take forward on to Wednesday where the Dragons face the Millita Kimlar in Baku. 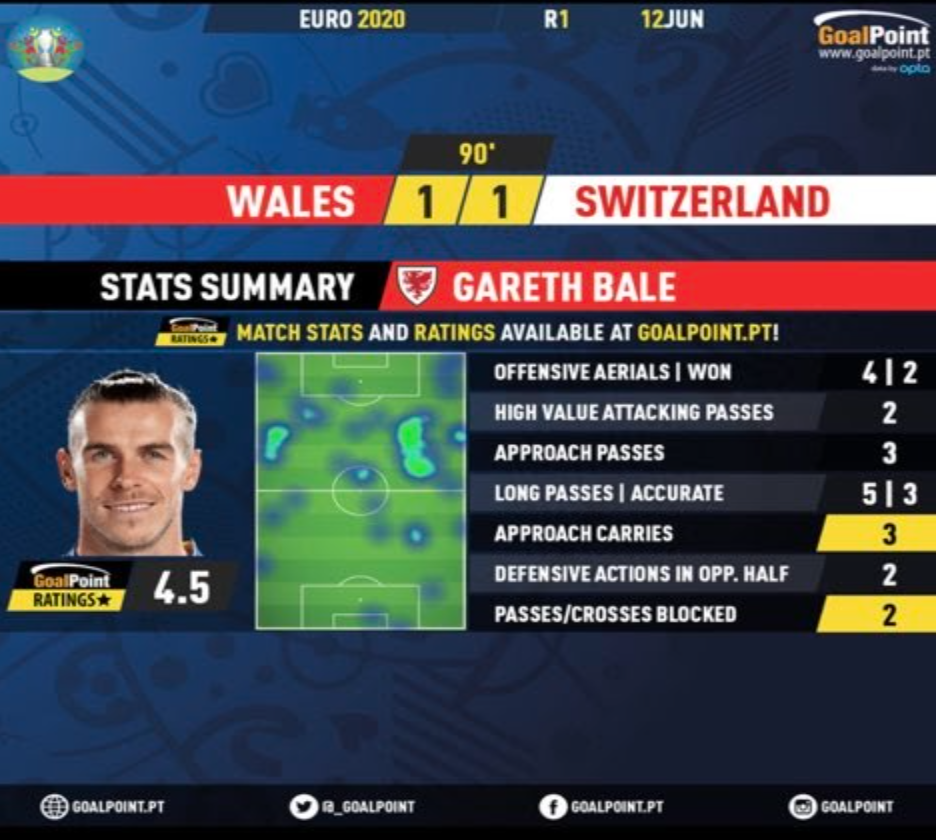 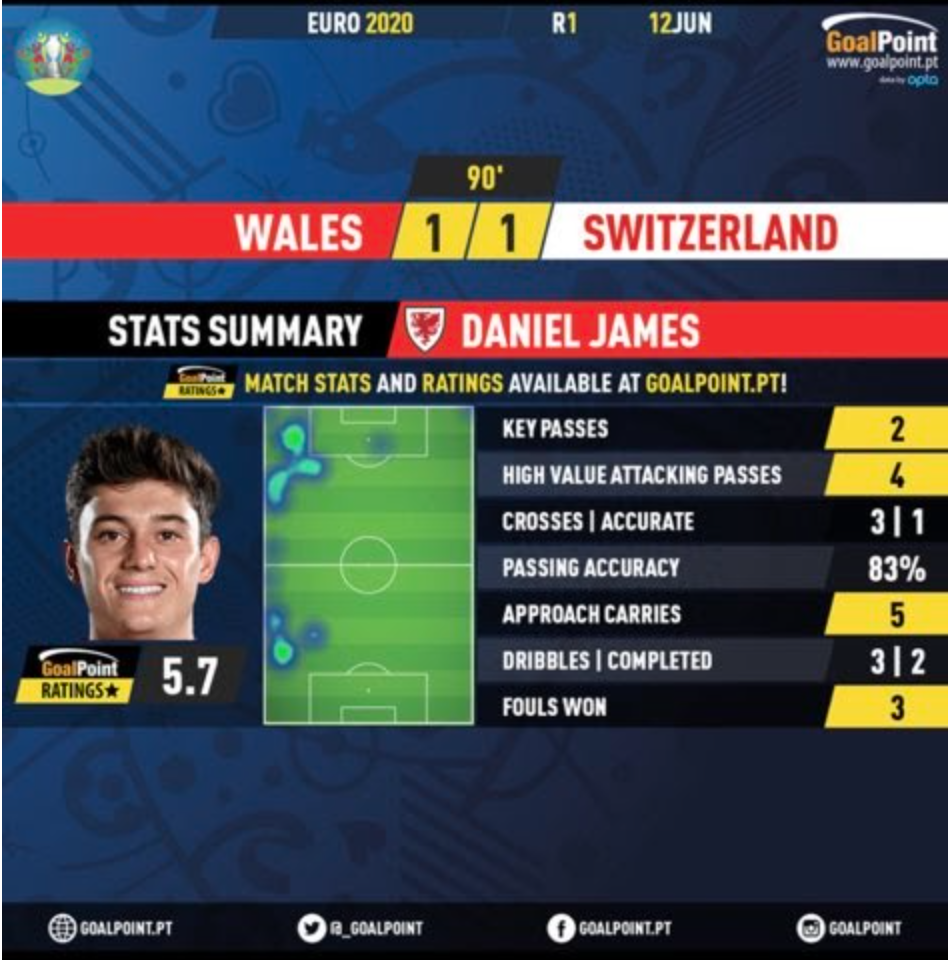 Whilst Wales’ legendary talisman delivered an anonymous performance in Baku, the oft-criticized Daniel James rose to the occasion and provided an exuberant performance on the opposite flank.