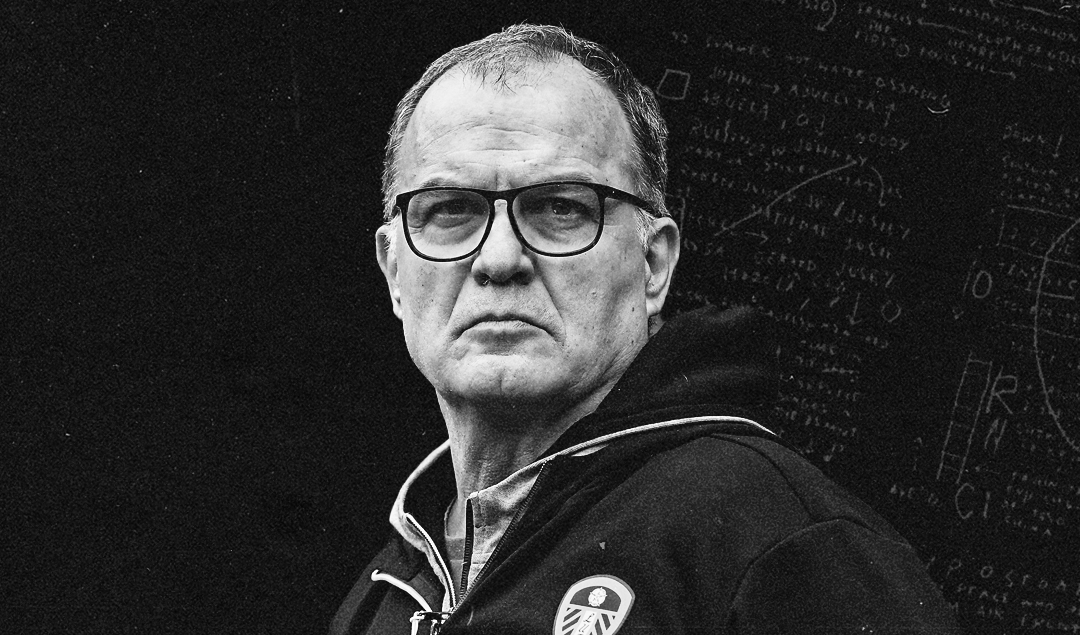 Everyone thought the same thing, didn’t they? When Marcelo Bielsa, THAT Marcelo Bielsa, was announced as the manager of Leeds United, who were predicted to finish 11th in the Championship that season and were only just recovering from the typically tumultuous tenure of Garry Monk. 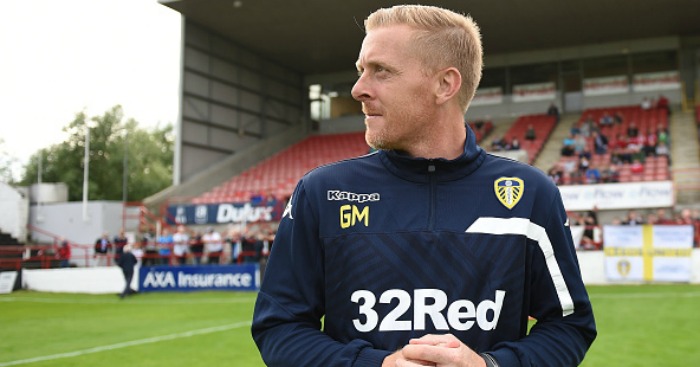 Then, of course, they didn’t get promoted, because it’s Leeds, because Bielsa’s intense, unique approach to football management isn’t equitable with the Championship.

Except, as Leeds have proven this season, it is.

The Man at the Helm

More than anyone could have possibly expected, their didactic manager’s attention to detail has revamped the entire club – in April, amid the pandemic shutdown, he arrived at Leeds’ training ground and, according to Phil Hay of The Athletic, wrote up a list of all the menial things that needed tending to around the facility.

But having the privilege of Bielsa coaching your football club doesn’t just earn you a compulsive attention to detail. It earns you one of the greatest and most influential tactical minds in modern football.

Leeds didn’t spend a single pound on transfer fees in the summer (though there were some clever loan deals), while simultaneously losing Pontus Jansson, Jack Clarke, Samu Sáiz and Kemar Roofe. Did it matter?

Well, they’ve been the best side in the Championship this season. In terms of the quality of football, they might even be the best Championship side for a decade. Maybe longer. That all has to do with the tactical genius of Bielsa.

Anyone with a passing interest in the tactical side of football has likely heard of Bielsa’s innovative and eccentric formation shape: the 3-3-1-3. Leeds begin with a 4-1-4-1 formation off the ball, not dissimilar to the kind Pep Guardiola (a Bielsa disciple) deploys at Manchester City. 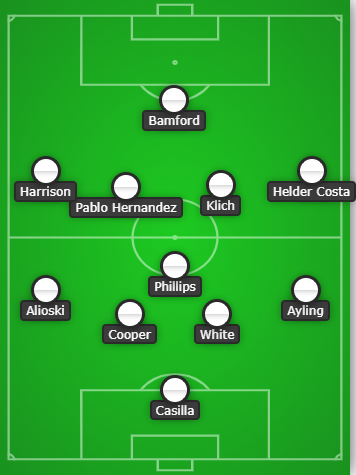 In offensive transition – or when Leeds have won the ball – that shape changes. The ferocious intensity lauded and vaunted by the Leeds squad is instilled in them for two reasons – interchanging movement so that opposition defences are constantly having to adjust, and the rapidness of transitions (both offensive and defensive.)

In essence, Bielsa’s Leeds team is constantly in motion, and almost never stationary, either trying to win the ball back or, having won the ball back, moving in unison to construct an attack.

This, primarily, results in both fullbacks pushing up, and the defensive midfielder dropping slightly deeper, effectively creating a staggered three-at-the-back. In midfield, one midfielder will be similarly staggered, closer to the striker than his partner, while the wingers push high to stretch the opposition’s defensive line. 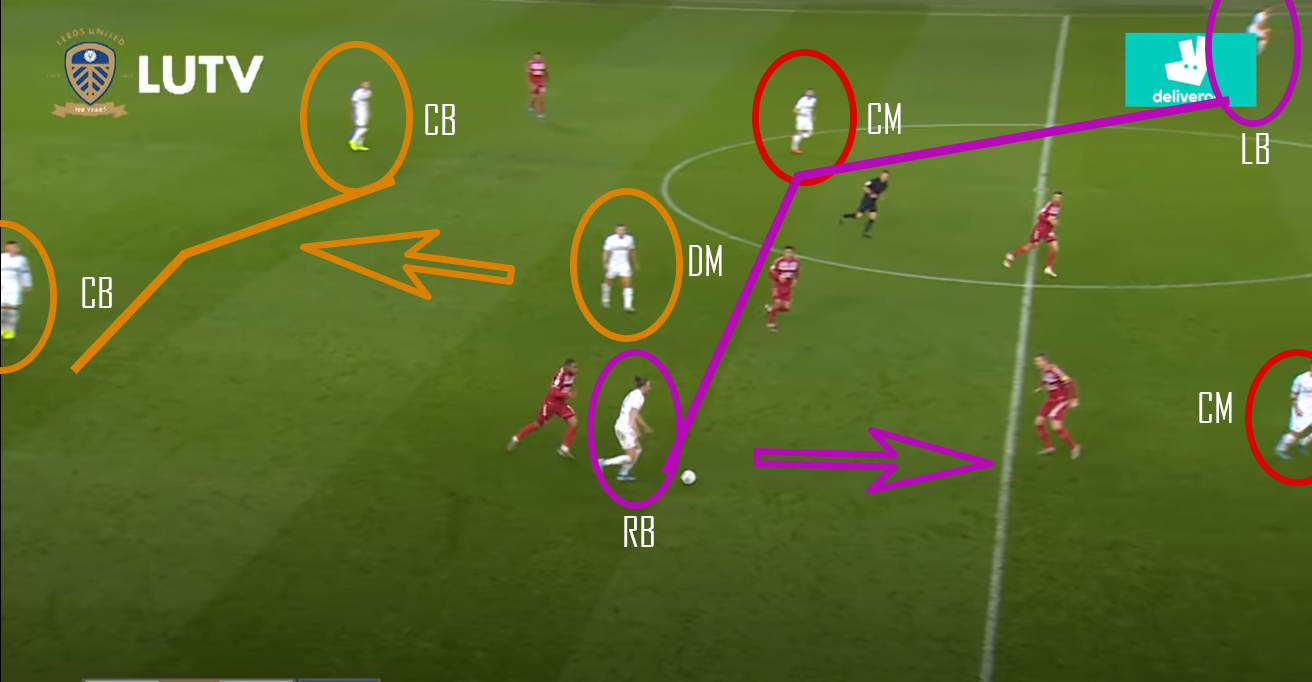 Ayling pushes up, Alioski stays wide on the opposite side, Phillips drops into the back three and Hernandez moves closer to the striker: creating a 3-3-1-3

A System, Not a Formation

There’s a tendency in tactics writing to oversimplify the system, to believe that the formation is the most refined representation of a manager’s method. This, of course, is almost never the case: a method manifests itself in the actions of the players all over the pitch, reacting to different situations.

Each player has their own attributes, their own skills, and the manager’s job is to bring it all together to create a symbiotic system that wins football matches.

Bielsa’s Leeds is the perfect embodiment of that. Sure, the 3-3-1-3 is there, but to truly understand what it’s doing, one must look at how its unique components fit into a system perfectly designed to make them shine.

The central midfielders do get extremely close to the striker, the fullbacks do join the attacks to create overloads, and the relentless swarm of players to completely overwhelm an opposition counter-attack before it gets dangerous is evidenced below.

On top of all that is the prerogative to move the ball quickly: players rarely ever take more than two touches while attacking. These are all characteristics of a Bielsa team. 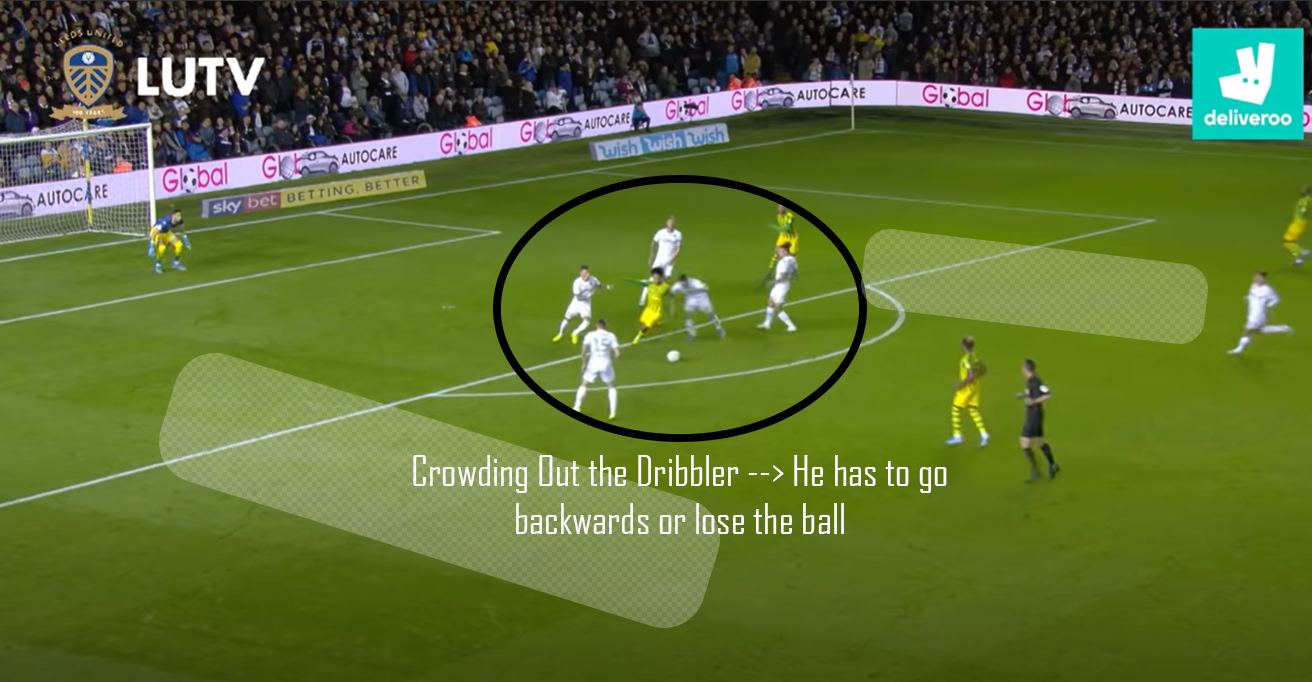 But it’s the uniqueness that makes Leeds so interesting.

Patrick Bamford may well be frustrating. He may even be infuriating. He may be profligate. He may miss far more chances than a top-level striker should.

But he is vital. He is integral. He makes the entire thing work.

Bamford is Bielsa’s fulcrum: he’s the player that both defenders and midfielders can play the ball into and therefore get the team moving around him. He’s strong, occupies defenders and is perfect for layoffs. The common strategy in attack is to play it into Bamford’s feet, then have him play a one-touch layoff to a midfielder running beyond him. 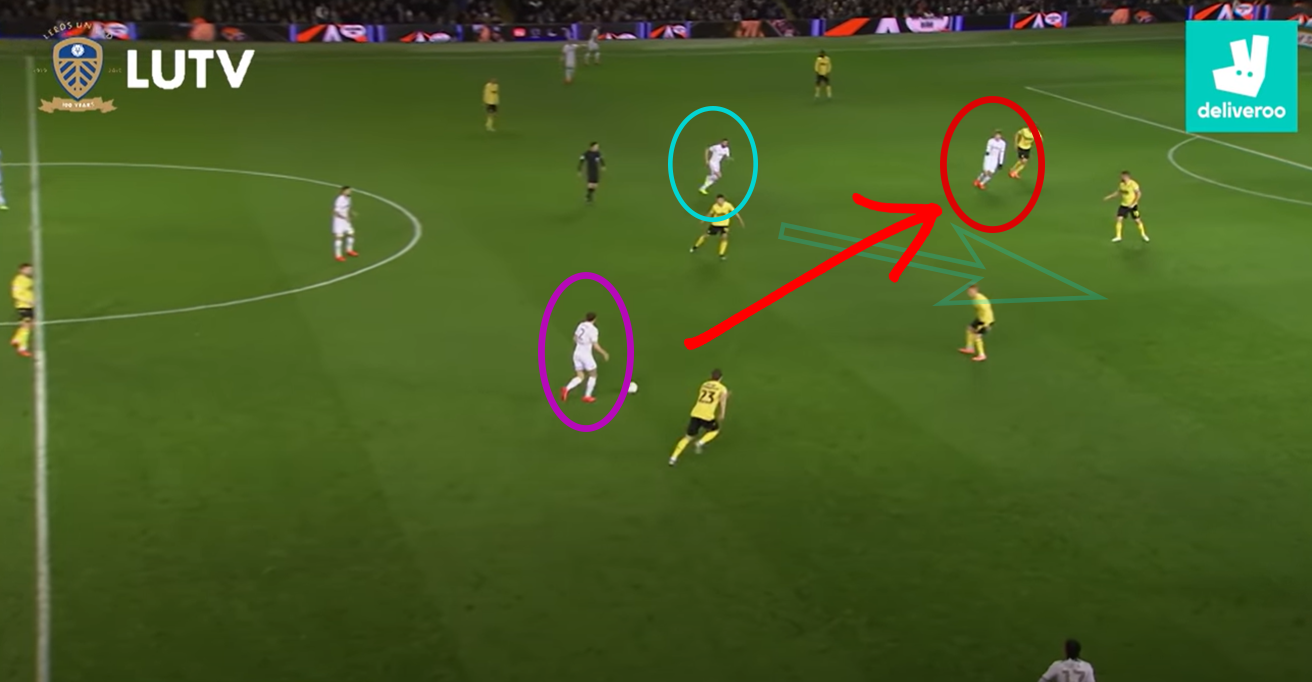 Ayling dribbles into midfield and sees Bamford calling for it to feet. Dallas’s run is beyond him 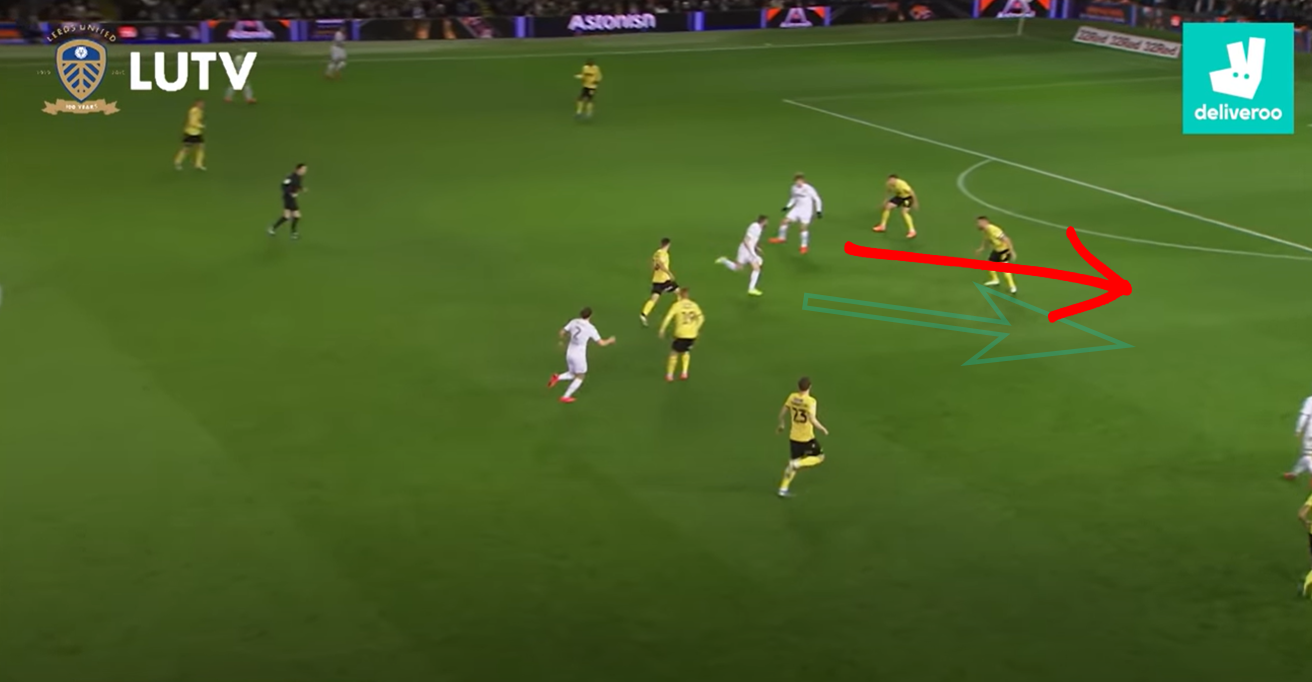 Bamford receives and passes first time with a dink over the top of the defence, and Dallas, who’s already at pace, can get onto the ball past the defender and shoot on the volley 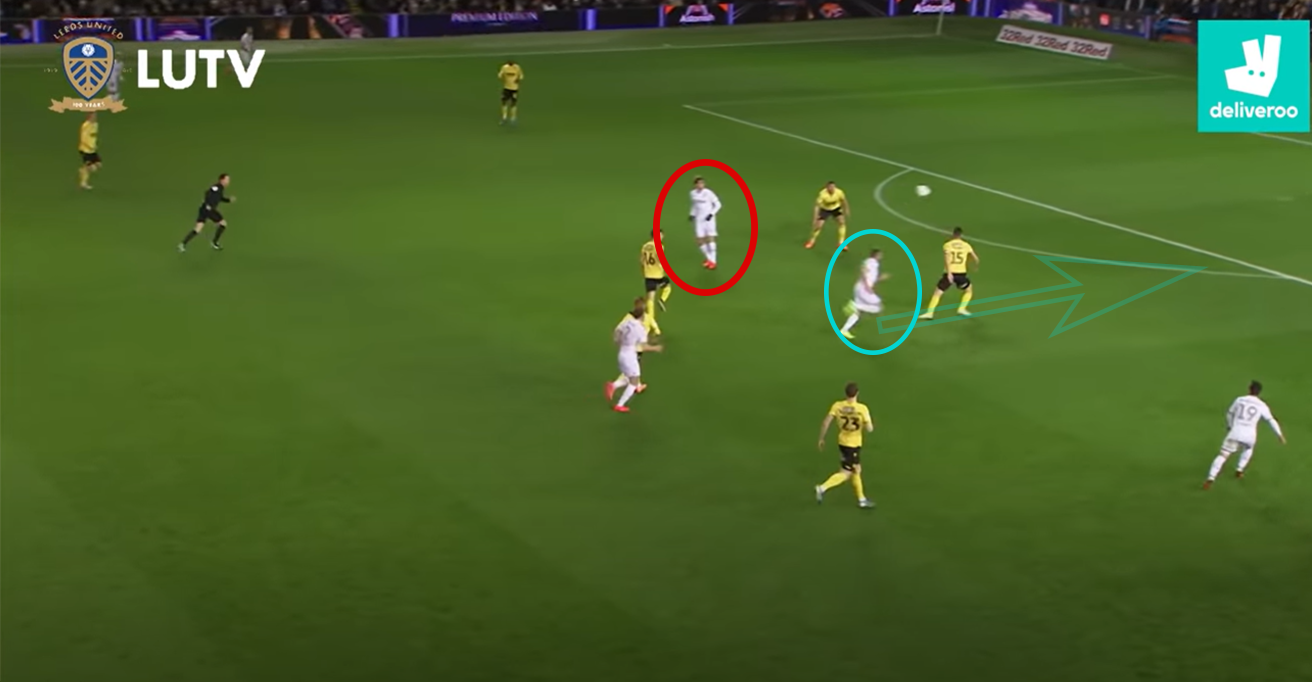 Pablo Hernández also interchanges positions with Bamford and the wingers: Hélder Costa’s position is nominally on the right-wing, where he can cut inside onto his left foot, but he’s just as often making a run centrally, while Bamford is out wide. 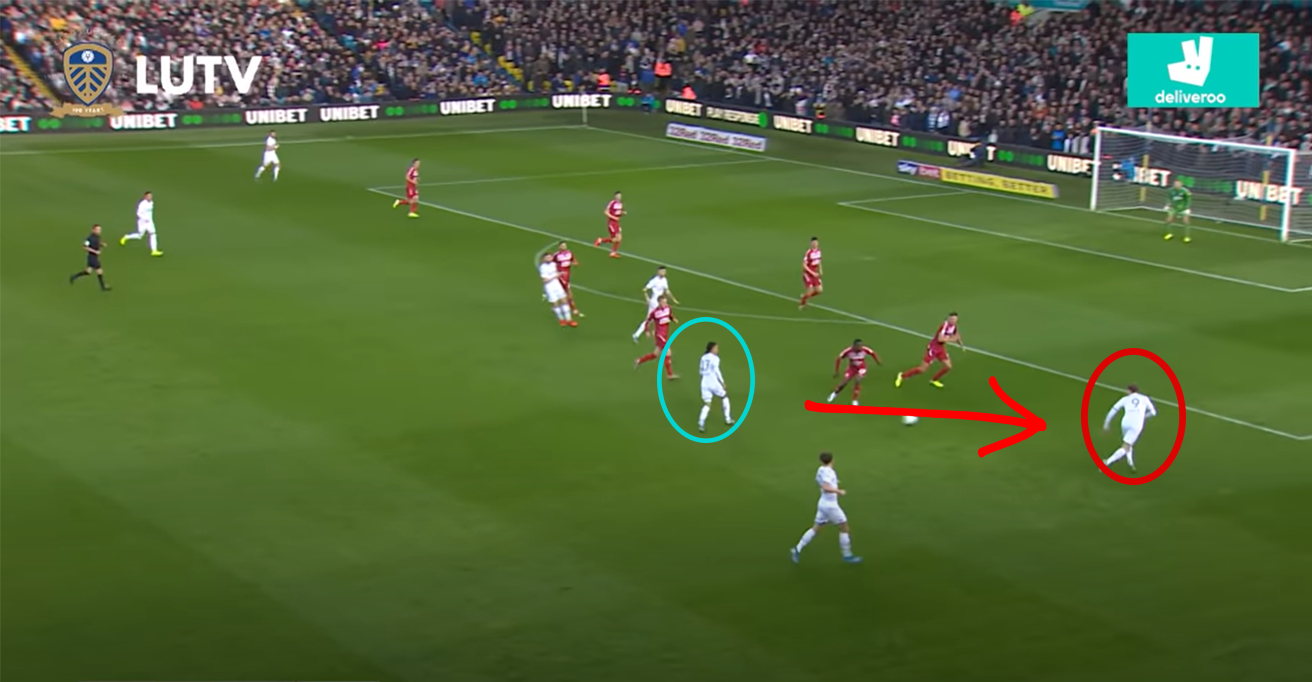 That famed Bielsa speed in attack? It’s enforced by Bamford, who is instructed to play one-touch passes. When opposition defences pack the box, Bamford turns from fulcrum to target man; most of his goals come from first time finishes.

There’s also the interplay: just watch a Leeds United move come about, nobody takes more than two touches, the ball is constantly in motion, and everything just looks so smooth: that starts with Bamford.

If he weren’t so irritatingly wasteful, he’d be lauded as a prototypical modern striker. But that doesn’t matter, because he’s perfect for Bielsa. And he works in conjunction with Leeds’ other weapons.

Luke Ayling is one of said weapons. Though, it’s hard to determine exactly what he is.

Most would say he’s a fullback, but then he’s shooting from just outside the box as often as he is crossing from the by-line. Some would say he’s a playmaker, and that’s true, but his most influential passes are often short, no longer than a few yards, in overloads. 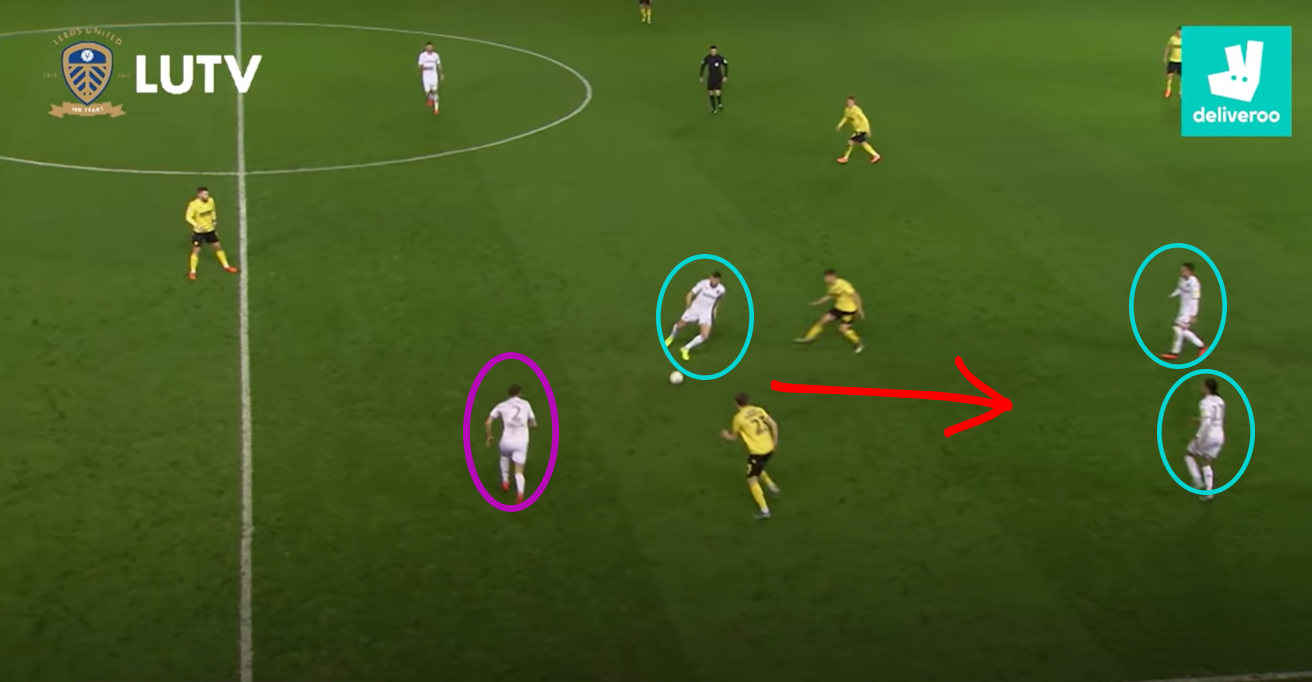 Leeds overloading in midfield, as Ayling comes inward, vacating space for his wingers 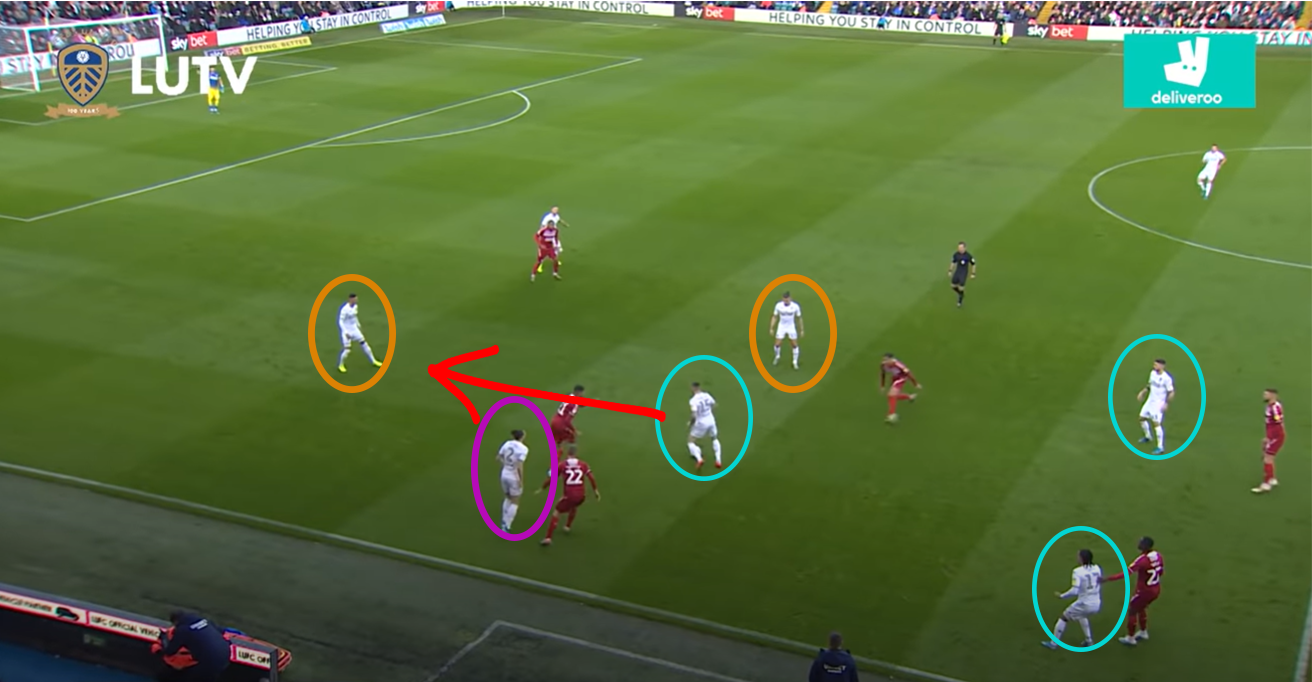 An overload at fullback, where Leeds have a 4v3 around the ball and two more waiting in support ahead. The idea is to move the ball forwards quickly and have the team move as one

An overload is when a team shifts their numbers to a certain area of the pitch to achieve numerical superiority. For Bielsa, they’re integral, and Ayling is the integral to orchestrating those overloads.

Ayling is the playmaker, the one the side looks to give the ball to most of the time to create attacks, and the reason the 3-1-3-3 works as well as it does in offensive transition: more often than not Ayling will receive the ball on the right and the opposite fullback (Alioski or Dallas) will move according to his position, either staying wide to receive a switch or coming tighter, in line with the midfield.

Ayling’s prowess in creating chances goes beyond creating overloads; he’s also the one who orchestrates one of Bielsa’s most regular methods of getting in behind a defence: the underlap. Essentially, Ayling will get the ball wide on the right-hand side, pulling an opposition player out, vacating the space behind that opposition player.

A winger or central midfielder will then run from their position at the top of the box into that vacated space, and Ayling will play him through, creating the perfect opportunity to either cross to the back-post or cut the ball back. 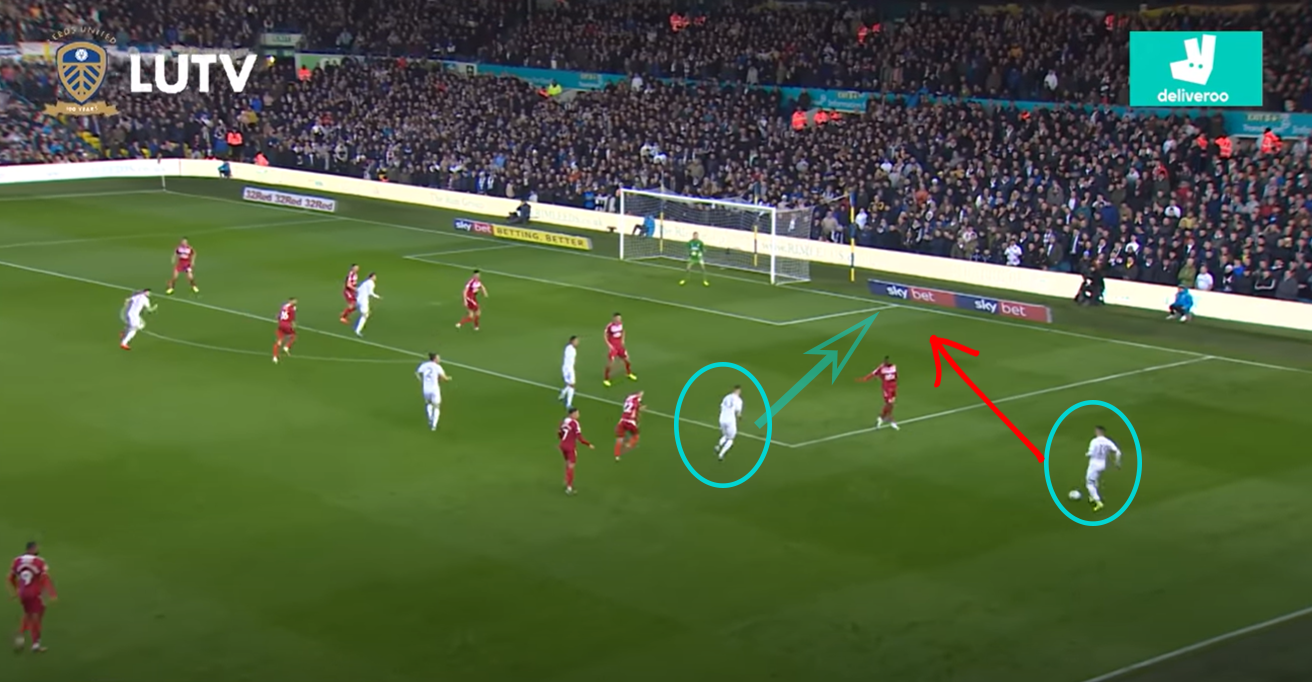 The underlap: one of Leeds’ most recognisable attacks, as Klich runs inside the fullback to get onto a diagonal pass 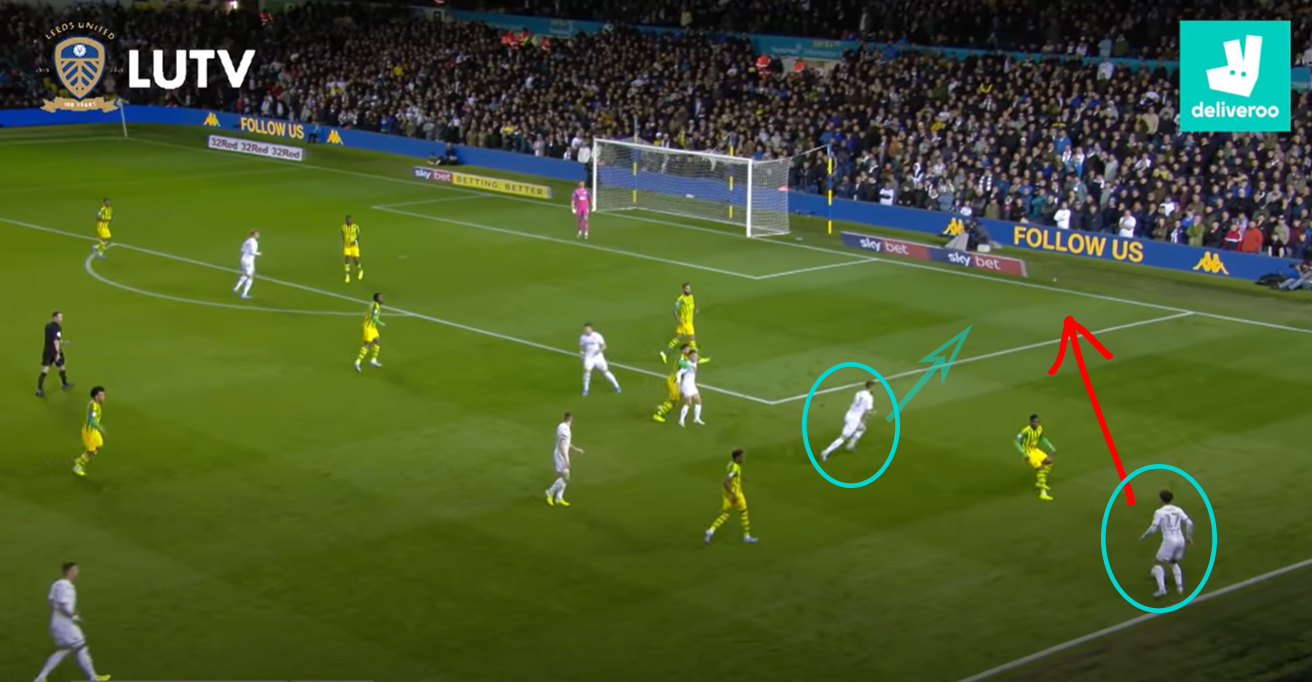 It occurs on the left flank too, though Jack Harrison prefers to be the widest player, often it will be the fullback that does the underlapping, rather than the passing.

In that situation, Ayling’s prowess around the box comes in: he’s scored four times this season, most of them have come from his typical runs into the box. 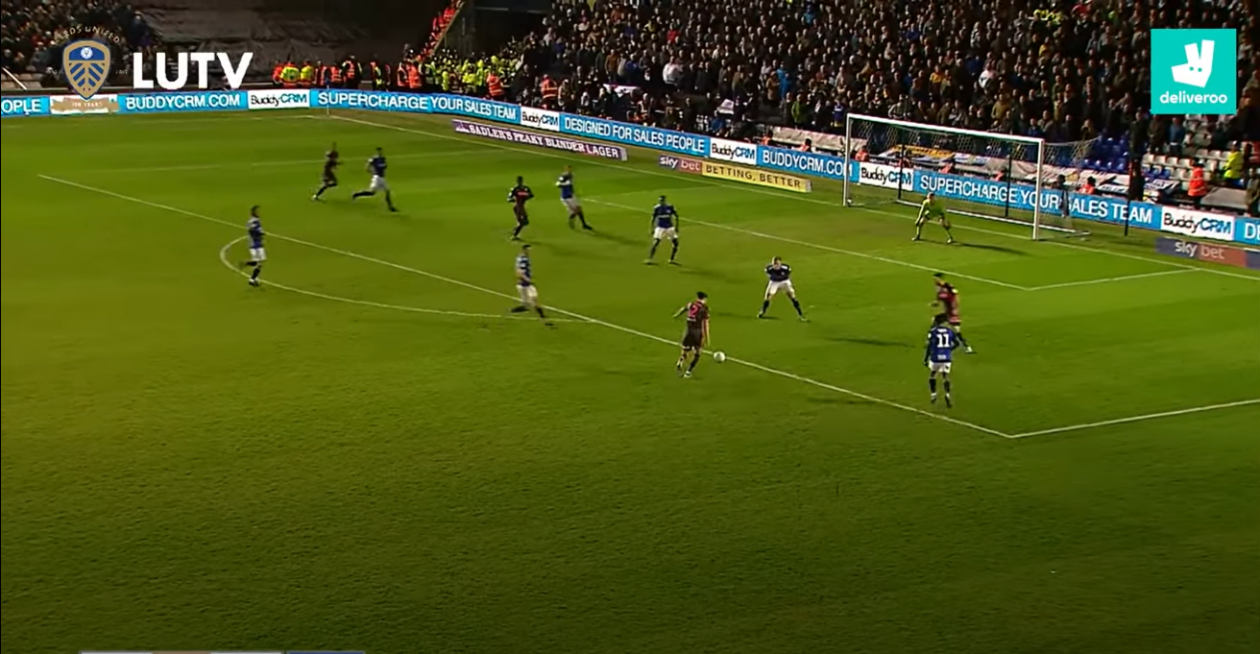 Ayling took the ball on the right flank from a switch, drove all the way through to this position, and ends up scoring at the far post

So, a fullback who also acts as a wide playmaker, and sometimes an attacking midfielder.

The third key pillar of this Leeds side is perhaps the best player in the Championship: Kalvin Phillips.

Another player Bielsa inherited, the defensive midfielder essentially allows the intricate shape to manifest. In the defensive setup he operates just in front of the defence, the first ‘1’ in the 4-1-4-1.

He’ll also often be responsible for the transition that creates the 3-3-1-3: he’s the perfect blend of combative and composed that enables him to both win the ball and distribute the ball, and he’s seemingly always looking for an avenue forward.

The Bielsa midfield – a staggered, almost zigzag, begins with Phillips at the base.

When the fullbacks do push up, Phillips drops between the centre backs, allowing them to spread wider and keep the ball moving, further creating those overloads. And, of course, there’s the fact he can spread the ball on his own – his passing range is excellent, and he’s often the one searing the ball into Bamford’s feet.

However, Phillips also plays a unique tactical role: as a lure. 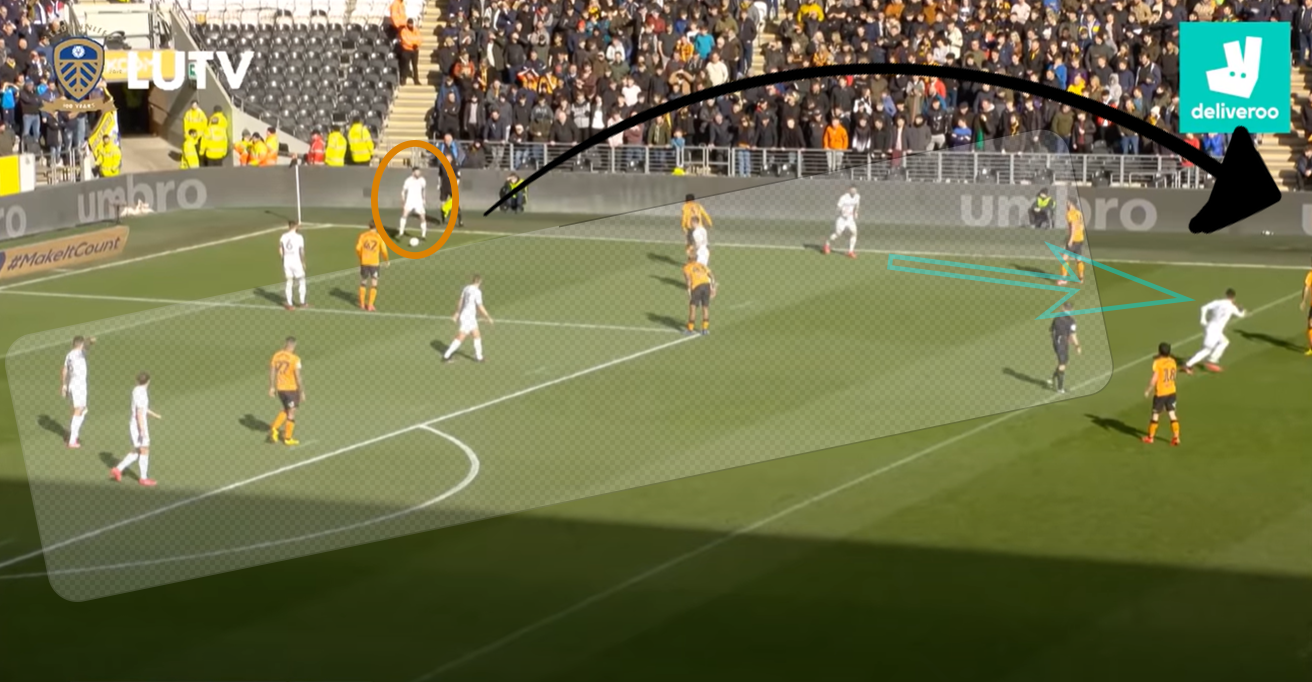 Having drawn five of Hull’s players into a press, Liam Cooper plays the ball over to the top, where Bamford has come deep and players run beyond him

It’s no secret that Bielsa teams can be stunningly direct if needed: a long pass can be as devastating as eight accurate short ones, but Bielsa has combated the parked buses he encountered last season by using Phillips as a lure: often he’ll tempt the press with short passing around the back, only to receive the ball, resist the press and play a long ball towards Bamford – who’s excellent at taking the ball down – or thread one over the top for Ayling – who often makes forward runs higher than the winger.

Ben White – on loan from Brighton – is excellent at this too, but it’s Phillips’ blend of composure and cunning that sees him anchor this entire Leeds team. Not only will he often drop into the back three when Leeds have the ball, but he’ll press beyond his other midfielders when Leeds don’t have the ball. 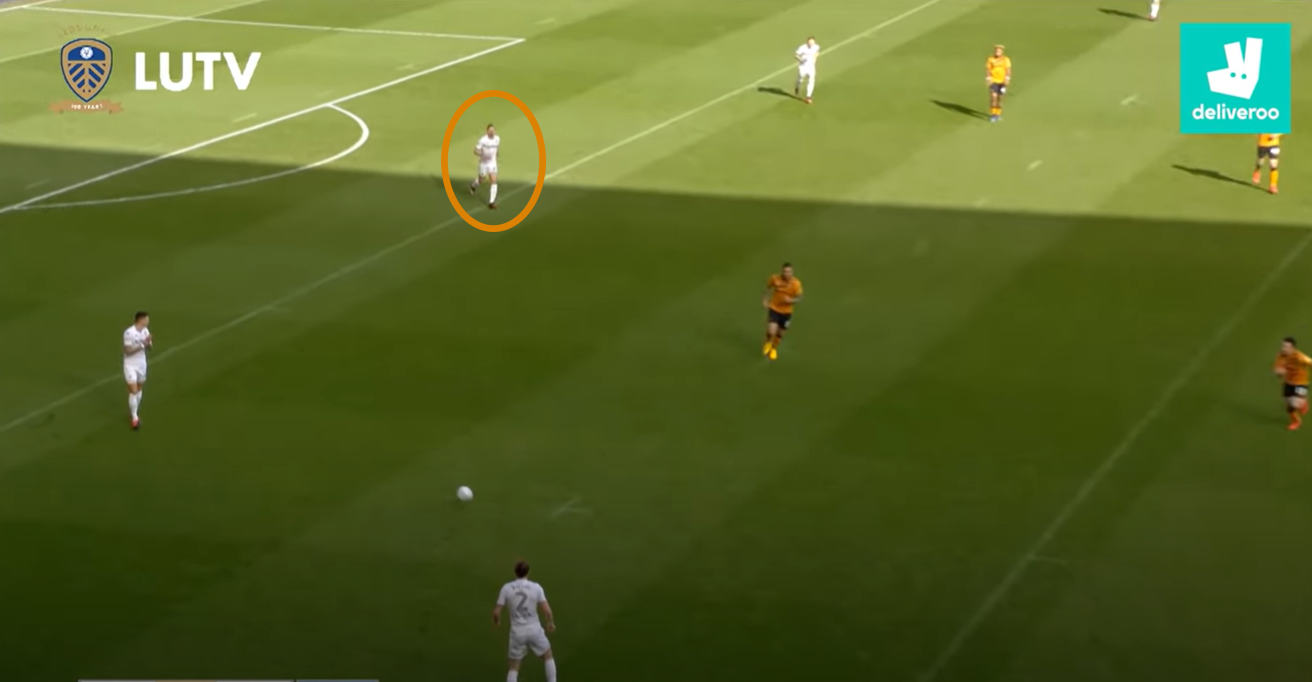 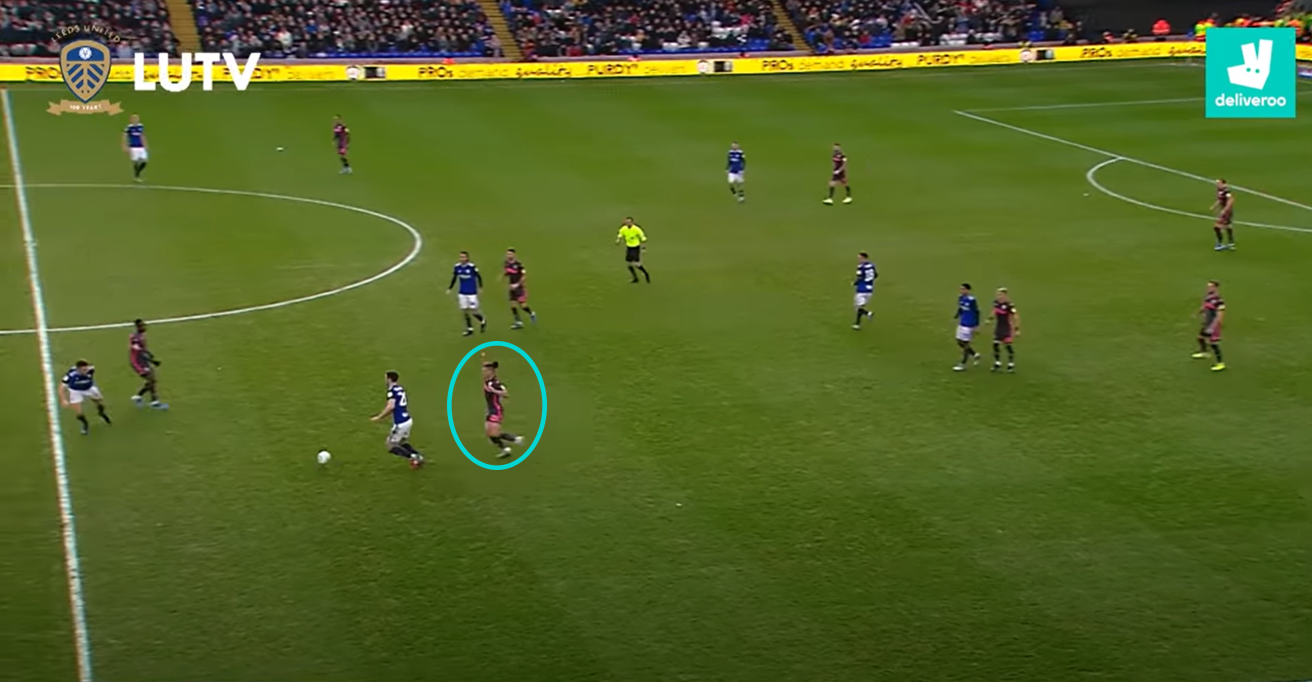 Phillips, Bamford and Ayling are representative of the unique characteristics of Marcelo Bielsa’s Leeds team. They’ve been the best team in the Championship by quite a distance, let down mostly by wasteful finishing and some mental fragility.

Still, they should fit right into the Premier League.