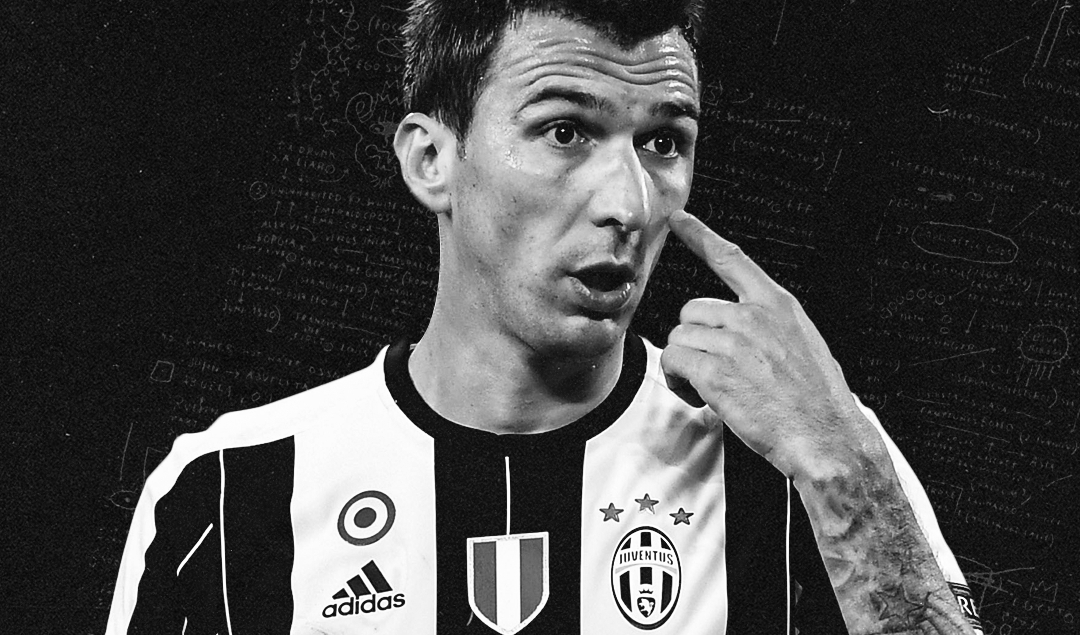 The concept behind wide target men is simple yet extraordinarily effective, both as a tactical tool for an individual match as well as a fundamental cog through the duration of a season. The most prominent and effective use of this was Mario Mandžukić under Massimiliano Allegri at Juventus.

My hypothesis behind the wide target man’s infrequent usage is that it is difficult to find players that fit the criteria required, as most suitable candidates are unaccustomed to defensive responsibilities such as tracking back, and are unwilling to switch from being a centre forward.

Moreover, the skillset juxtaposes much of which is expected from a winger, generally expected to be quick and proficient in one versus one scenarios. Thus, committing to the role is difficult from both the player’s and the manager’s perspective because it limits options and requires complementary players around the wide target man.

The fundamental concept behind the wide target man is their ability to win aerial duels against opposition full backs who are typically some of the smallest players in the team. This allows for a physical superiority to be attained against almost any side, and crucially establishes a chance creation mechanism, as the wide target man is expected to most aerial duels. Therefore, simply crossing the ball to the far post is all that is required once the crosser has received enough time and space. 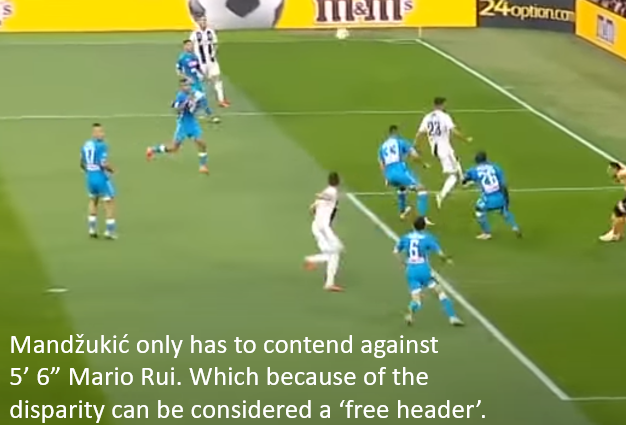 Perhaps the best example of this usage being successful came in the the second leg of the 2018 Champions League quarterfinals, where Juventus defeated Real Madrid 3-1 but ultimately failed to progress to the semifinals.

The first goal came when Mandžukić won a header at the back post, in part due to poor off-the-ball preparation from Real Madrid. The second, however, perfectly characterises the benefits of the height advantage.

Mandžukić, essentially uncontested against Dani Carvajal, artificially creates the conditions for a free header due to the disparity in jumping reach. An accurate floated ball into the path of Mandžukić will suffice, as there is simply a limit to what 5′ 8″ Carvajal can do against Mandžukić.

Thus, it creates the least favourable match-up on the pitch which can then be exploited in the place where the opposition would least expect it. Centre backs consistently encounter large forwards and prepared for physical duels. Full backs, conversely, have not received adequate preparation for such a threat as they typically deal with small, quick, agile players rather than towering forwards.

Wide target men simplify methods of attacks by creating reliable crossing opportunities, making it useful for one off scenarios as well as a tool for breaking down deep defences. To minimize its effectiveness, crossing opportunities must be cut off at the source which makes it more difficult for teams to defend narrowly and in a compact manner, which is generally preferable during periods of consolidated defending.

The threat of the wide target man can force alterations which create more space for the attacking team centrally, as the opponent has to sacrifice compactness to defend more aggressively in wide areas. To borrow the old adage, “you’re only as strong as your weakest link.”

As the wide target man isolates the opposing full back at the back post, players such as Mandžukić who are traditional centre forwards will maintain their predatory instincts in attacking the cross as well as other opportunities.

However, if it were so effective, why didn’t Mandžukić score more than 5 goals in Serie A that season? The fact is, games such as the second leg against Madrid tend to be one-offs, but a wide target man’s job isn’t solely to score. Apart from scoring, these players can perform as an outlet in possession due to their aerial superiority, thus allowing a team to safely play out of defence or bait the opposition’s press.

Having a wide target man can turn aimless long balls into pinpoint long balls. These players can constantly win aerial duels regardless of their positioning on the pitch, allowing them to be an outlet in possession and helping their team evade the press.

Mandžukić’s presence becomes a tool for Juventus to bypass the press, and his work-rate on the flanks allows him to track back and defend when needed. It is advantageous for wide target men to be 6’3″ or shorter, as Mandžukić is: any taller and they would be too lumbering to play effectively on the flanks. 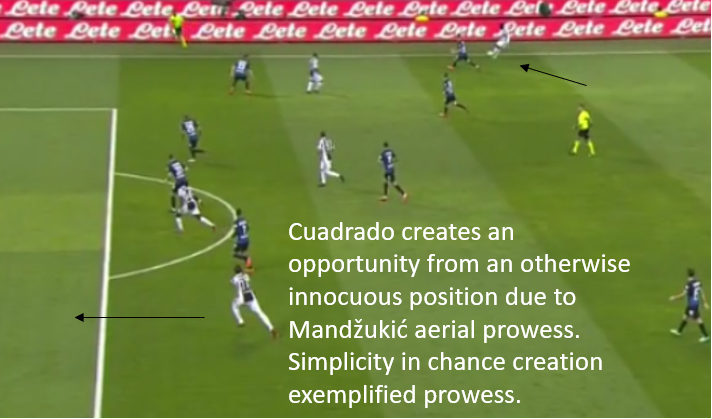 You’re probably thinking: why don’t they just move a center back to the full back position to even out the size difference? If they do that, they’ll lose the attacking threat. As much as Madrid would gain in physical duels if they had Ramos (suspended for the second leg in Madrid) starting at right back, they’d lose Carvajal’s efficiency in the final third in exchange for a player who is far easier to press. Moreover, Ramos still wouldn’t be guaranteed to win every deal; this strategy would merely reduce the Croat’s aerial threat rather than negate it.

One would think that a wide target man, Mandžukić in this instance, is slow and thus the benefits of using him as an outlet are negated because he slows down the pace at which the team can transition, particularly if he fails to keep up with his teammates and thus misses a potential cross. They would be right; and thus, playing a high defensive line will help the opposition cope with the wide target man.

Mandžukić doesn’t have the pace of a winger like Harvey Barnes or the close control and quick feet of a winger like Wilfried Zaha, and he isn’t able to reap as much damage behind a high line or progress his team up the pitch with his dribbles. However, Juventus boasted a wide variety of players who could take advantage of space in behind, such as Paulo Dybala, Douglas Costa and Juan Cuadrado. One long ball to Mandžukić, who plays a quick lay-off pass to Miralem Pjanić, who chips it past the defense and into the path of the forwards, and Juventus are golden.

His mere presence helps alleviate pressure and minimizes the effectiveness of a counter-press, forcing the defense to adapt their positioning in order to remain compact. Therefore, wide target men are still useful against high lines where periods of sustained crossing as less likely to occur because they manipulate the opposition’s spacing, which in turn creates space to be exploited and counter attacking opportunities.

Far from being a luxury role only suitable for teams that dominate possession, wide target men also function for smaller teams who rely on quick counter attacks to carve out chances. The wide target man allows for rapid progression up the pitch by performing as an outlet that can consistently win physical duels. Similarly to a target man who plays in central role, wide target men allow their teams to bypass pressure with long balls that quickly turn into goal-scoring chances. 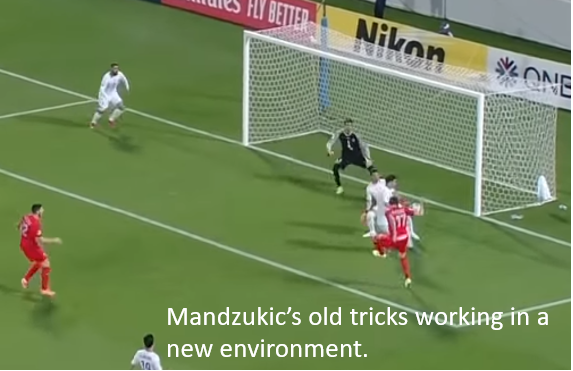 An interesting if brief segment of Mandžukić’s career was when he played with Cristiano Ronaldo in the 2018/19 season, Allegri’s final season in Turin. Having two massive aerial threats in Ronaldo and Mandžukić created more opportunities for both players, as less attention could be focused on either respectively.

The Portuguese provided a more multifaceted threat by occupying the centre backs, with the Croat lurking at the far post and compensating for Ronaldo’s lack of effort defensively. The combination of both players’s aerial prowess made Juventus nearly impossible to defend against in aerial situations, as both players could switch roles and exploit the opponents’s weaknesses.

Against Atlético Madrid, Mandžukic occupies Diego Godín, whereas Ronaldo crashes the far post behind Juanfran, latching onto Federico Bernadeschi’s cross and heading it past Jan Oblak.

Between 2015 to 2019, Mandžukić was a crucial tactical asset for Allegri, capable of operating in multiple roles and positions and able to track back and make sacrifices for his team. He brought out the best of his teammates by playing as a wide target man and allowing them to play direct football.

After struggling to adjust to Pep Guardiola’s system at Bayern, and falling out with Diego Simeone at Atlético Madrid, many wondered if Mandžukić’s best days were behind him when he arrived in Turin at 29 years of age. However, he proved the critics wrong, delivering four years of excellent service before being pushed out — in part due to Juventus’s economic problems, in part due to Maurizio Sarri’s lack of trust in him to fit his style.

The size advantage that comes from the wide target man vs. the the full back allows for tactics such as sustained crossing to be more effective, enabling teams to break down deep blocks and compact defenses. Like all things in football, the wide target man role cannot and should not be transferred unilaterally, but it remains an underutilized position that has already proved its unique benefits in Turin.