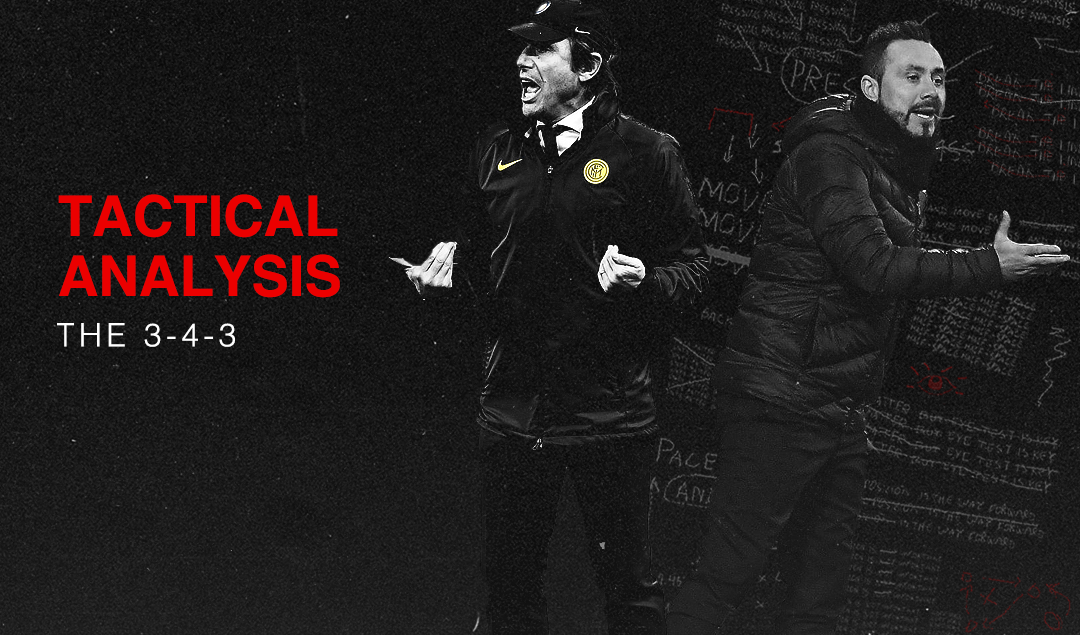 The popularity of the 3-4-3 formation originated during the late 1980’s and early ’90s in Italy, when an influx of center-backs occupied Serie A. Originally created as an extremely offensive formation, the evolution of the 3-4-3 into its current variations has made it a versatile formation that can be now be used for attacking and defensive set-ups.

Whilst teams that use the 3-4-3 today typically play with two wide midfielders and two wingers, the first major usage of the 3-4-3 came in Barcelona, where Johan Cruyff utilized a 3-4-3 with a diamond midfield. Adapting the 4-3-3 that he played in under Ajax manager Rinus Michels, Cruyff’s 3-4-3 diamond saw Pep Guardiola operate as a holding midfielder, protected by a back three of Ronald Koeman, Albert Ferrer and Víctor Muñoz. The popularity of the 3-4-3 quickly carried over to Italy, and soon took root at the San Siro in the latter end of the decade.

After an impressive spell at Udinese, Alberto Zaccheroni took over as Milan manager in 1998 and implemented an attacking 3-4-3 formation that saw the Rossoneri win their 16th Scudetto. Zaccheroni utilized a back three of Luigi Sala, Alessandro Costacurta and Paolo Maldini, and his 3-4-3 made great use of the attacking players at his disposal.

Nearly 15 years later, Walter Mazzarri’s Napoli side displayed the modern essence of the 3-4-3 by using fast, energetic wing-backs in Christian Maggio and Andrea Dossena, assured and intelligent center backs in Paolo Cannavaro and Salvatore Aronica, and a fearsome attacking trident of Marek Hamšík, Edinson Cavani and Ezequiel Lavezzi. Napoli would go on to finish 3rd, 5th and 2nd under Mazzarri until his departure to Inter in the summer of 2013. 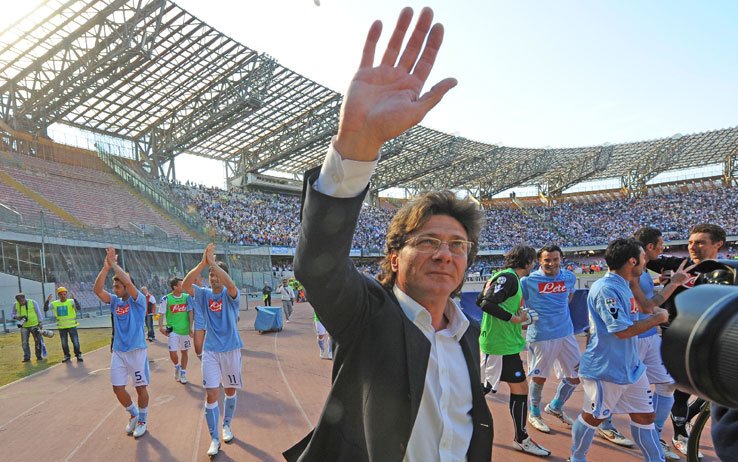 Mazzarri’s bitter rival, Antonio Conte, achieved success in England by leading Chelsea to the 2016/17 Premier League title, utilizing his tried and trusted 3-4-3 formation. Victor Moses and Marcos Alonso marauded up and down the flanks, Nemanja Matić partnered N’Golo Kanté in the heart of defense, Eden Hazard and Willian played off the shoulder of bulky target man Diego Costa, and César Azpilicueta partnered David Luiz and Gary Cahill in the back three.

Most recently, Gian Piero Gasperini’s Atalanta have reached extraordinary heights with a system reminiscent of Michels’s Ajax, with Josip Iličić partnering Duván Zapata and Papu Gómez in Gasperini’s aggressive, high-octane attack. After reaching the Champions League quarterfinals for the first time in the club’s 113-year history, La Dea will be looking to make another audacious run in Europe after finishing 2nd in Group D.

Tactical Analysis of the 3-4-3

Starting with the back 3, the middle center back (Leonardo Bonucci in Conte’s Juventus) performs the role of a libero. A libero is a ball=playing sweeper who carries the ball forward to help initiate attacks, while also being the final line of defense when defending opposition attacks.

The libero is an essential piece in making the 3-4-3 fully function, as without him, the two central midfielders would be left with no solid, reactionary defensive support. The libero is supported by two other central defenders whose main function is to cover and be cognizant of balls floated in behind him when possession is lost. They also are the first to receive the ball when play is initiated by the goalkeeper.

The wing-backs are also critical to the functionality of the 3-4-3. As part of the midfield 4, they are positioned strategically wide in the attacking phase of play. During the attacking phase, they are expected to push up the field and overlap to support the front 3, especially when the wingers act as inside forwards, which consequently forms a front 5.

Perhaps the most physically demanding position in football, the wing-backs are also expected to track back and help in the defensive phase. In the defensive transition, the back 3 forms a back 5 with wingbacks covering both wings in order to stop opposition wingers from entering the final third.

The box-to-box midfielder is usually a dynamic, high energy and balanced player who is expected to help in the defensive transition and the attack transition. The more defensive-minded of the pair tends to stay back in attack, firmly covering and protecting any counter attacks from opposition when possession is lost. 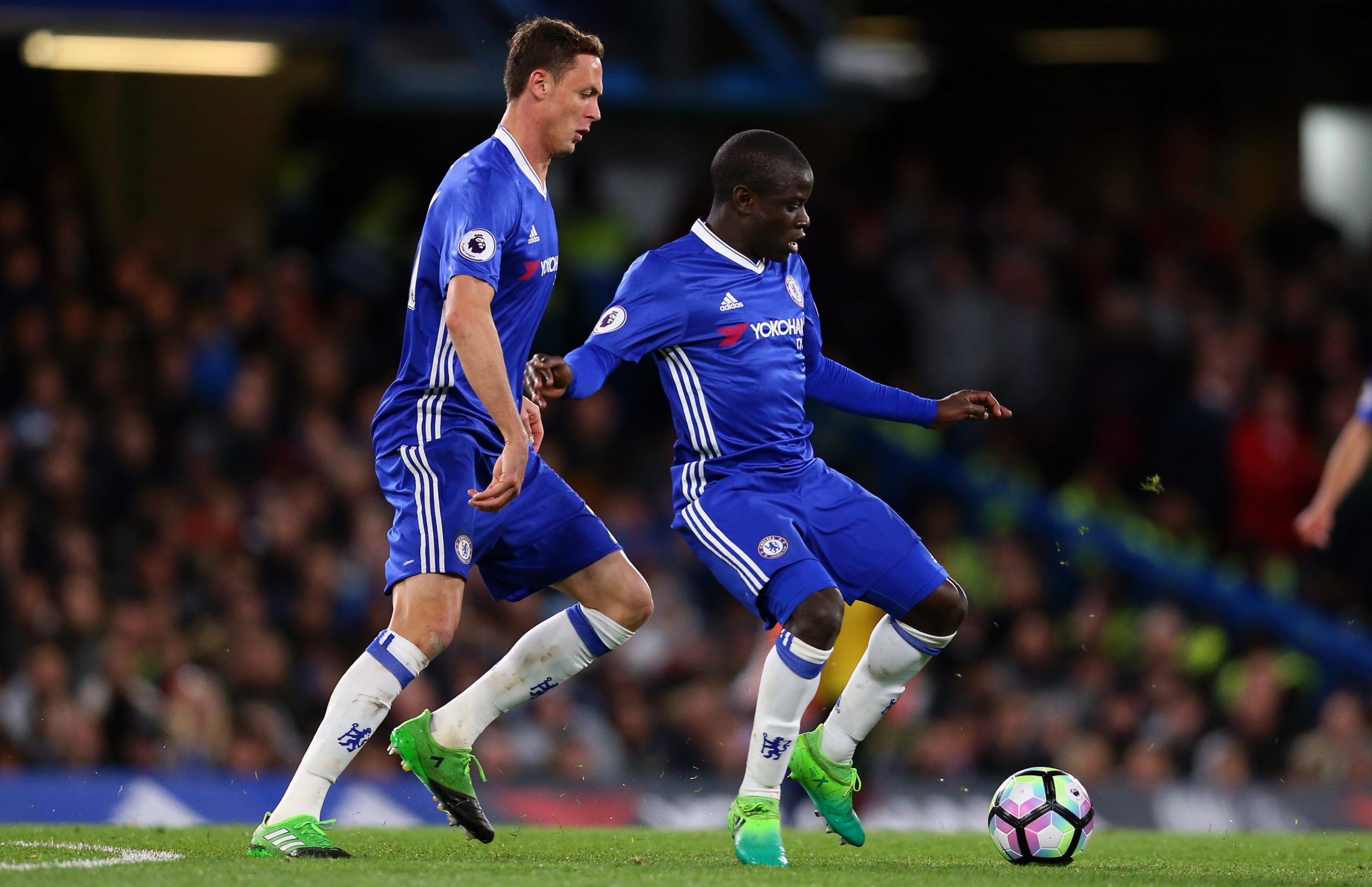 The central defensive midfielder in the pair must be a tactically competent player, whose ability to read the game is above all other teammates. Using penetrative passes to the midfield, directing play from deep, and spreading play wide to the wingbacks are prominent features of a defensive-minded midfielder in a 3-4-3.

The front 3 consists of a striker flanked by 2 wingers at either side. The wingers are essential to counter attacks, using their pace to receive the ball to attack opposition defense. During the attacking phase, the wingers tend to tuck inside the half-space, acting as inside forwards to support the striker and receive balls from the midfielders.

They regularly make runs into the final third looking for through balls from midfielders, or to drag the opposition defenders for the box-to-box midfielder to make a late run past the opposition backline. In the defensive transition, the wingers track back also to protect the wingbacks, forming a 5-4-1 formation.

The focal point of the formation, the striker, can be very versatile depending on the specific role given by the manager. A false nine would provide an option for the midfielders by receiving the ball from an attacking position. An out-and-out striker would stay deep into the opposition final third in the attacking phase, while also acting as the lone attacking player when the 3-4-3 transforms into a 5-4-1 in the defensive transition.

A major advantage of using the 3-4-3 is that teams using this formation may wreak havoc on the opposition by overloading the wings with players. With 2 wing backs helping in both attacking and defensive phases, and with the front 2 wingers tracking back opposition fullbacks, users of this formation may attack heavily on either flank of the pitch causing the opposition to be forced to spread out and stay less compact.

Constant crosses into the box for the striker to receive also contributes heavily to the likelihood of goals being scored. Furthermore, having an extra man in the defensive line may help keep the final third compact and may also help in covering all passing channels that may be created by opposition attackers. The libero helps to launch attacks in order to catch the opposition on the counter, further adding to the attacking threat.

The 3-4-3’s defensive shape, the 5-4-1, is a sturdy and compact defensive shape that is incredibly hard to penetrate through due to the influx of players in the midfield and defense, and when used the right way, may frustrate opposition attackers.

The 2015/16 season saw Chelsea undergo a massive regression from their previous title-winning season under José Mourinho, with the Blues finishing 10th in the league and Hazard undergoing the worst scoring drought of his career. However, Conte’s appointment as manager in the summer of 2016 transformed the club’s form as Chelsea won the Premier League title, registering 93 points and scoring 85 goals. 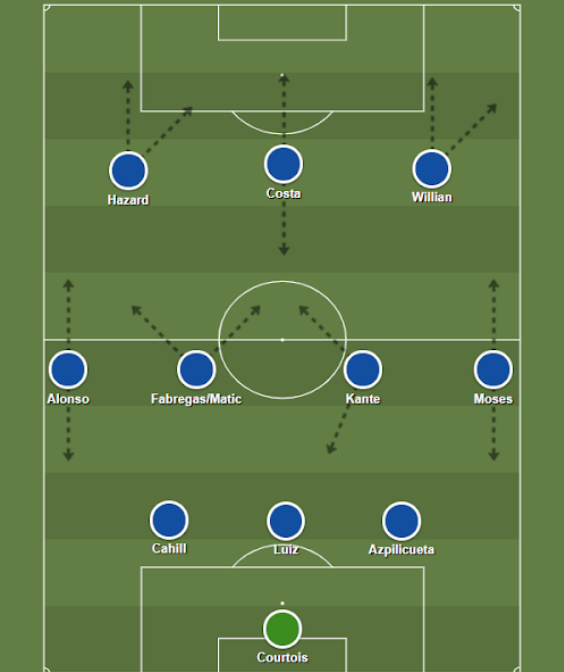 Chelsea blended a solid defensive structure with free-flowing attacking football during Conte’s first season, with Cesc Fàbregas forming a red-hot attacking partnership with Costa, Luiz helping build the attacks with runs from deep in his libero role, and Kanté delivering an all-action, box-to-box campaign following his heroics in Leicester City’s title-winning season in 2015/16.

The lack of central midfielders shielding the defenders is a major contributing factor to this formation’s flaws. Depending on the team using this system, the two central midfielders may be heavily exposed on the flanks if wingers do not track back. The midfield in the first line of defense and if not shielded properly the back 3 will be susceptible to inevitable attacking threat. The wingers/inside forwards’ responsibility to track opposition is also critical for shielding wingbacks.

Moreover, with the libero’s responsibility of runs infield, the player cannot afford to lose the ball while initiating attacks. Despite the 2 central defenders acting as cover when initiating attacks, the wingbacks are pushed up ready for the attack. As such, a loss of possession from the libero early causes an automatic 3 on 2 situation where the opposition front 3, 4 if an attacking midfielder is fielded, attack in all areas surrounding the final third. For this reason, the libero’s ball-playing ability must be as good as their ability to defend.

From a physiological perspective, the physical demands of this formation on the players are immense. A defensive midfielder who carries the responsibility of shielding the defense has to cover all areas of the midfield, which takes incredible physical exertion.

Likewise, the box-to-box midfielder and the wingbacks, who all have to help in the attacking phase and defensive phase, carry major responsibility in making sure they succeed in both, further adding to the the formations physical demands.

From Rinus Michels to Antonio Conte, the 3-4-3 has undergone plenty of variations and mutations over the past half-century, and it will continue to retain prominence in the ongoing decade as managers look to marry defensive solidity with free-flowing offensive football.