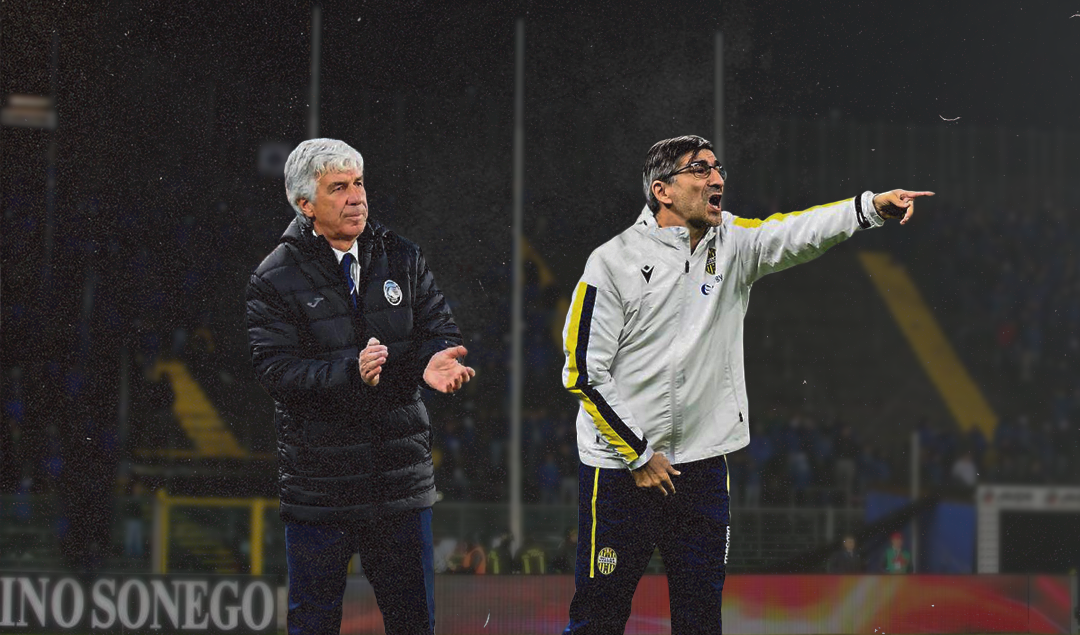 In this piece, I will discuss the advantages and pitfalls of a man-oriented back three, but to start, I should clarify what is meant by the phrase “man-oriented.” Rarely is full man-marking seen in the modern game because of its susceptibility to being dragged out of position by the opponents’s movement. Man-oriented back threes are similar to zonal-man set-ups, such as José Mourinho’s gameplan during the 2017 UEFA Europa League Final, but there are still some considerable differences between the two strategies.

Man-oriented defenses dispose the center backs to intensely follow the attackers, with the defenders having freedom to be aggressive in the marking thanks to their covering center back who can compensate for a lost duel. Moreover, the usage of wingbacks allows for the team’s forwards to tuck in narrowly when pressing, allowing them to be more effective in hassling the opposition’s defenders during their press. This scheme typically takes the shape of a 3-4-3, but in some occasions can be manifested in a 3-4-1-2 or a 3-4-2-1. 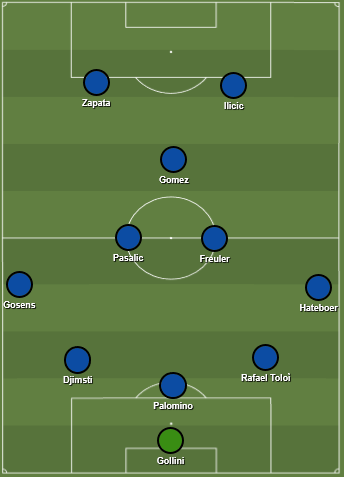 Today, we will be analyzing Gian Piero Gasperini’s Atalanta, which plays a 3-4-3, and Ivan Jurić’s Hellas Verona, which plays a 3-4-2-1. However, one could also find an example of when this man-oriented scheme backfires in Borussia Dortmund’s recent 4-0 drubbing of Schalke in the Revierderby, when Schalke’s defense was left exposed by Dortmund’s high-flying wingbacks. 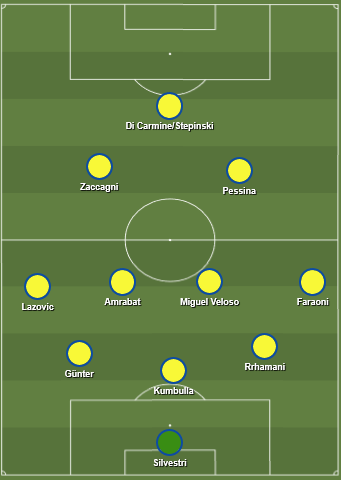 Man-oriented back threes are much more reactive to the game’s unfolding events than zonal systems are, and this is because their positioning is predicated upon the opponent’s movement. Whether it’s Gasperini’s Atalanta or Jurić’s Hellas Verona, man-oriented schemes thrive in chaotic games by forcing the opposition into making hasty decisions which can often result in losses of possession.

They trigger an autocatalytic cycle; the high-pressing conditions create space, which forces players to think for themselves in order to manage unpredictable scenarios. To deal with this uncertainty, the center backs focus on marking a player rather than a zone, as the passage of play is far too volatile to prepare in a zonal fashion. Instead of trying to anticipate where the attack will go, these defenders focus on the players’ movement as the sole indicator behind the potential attack. 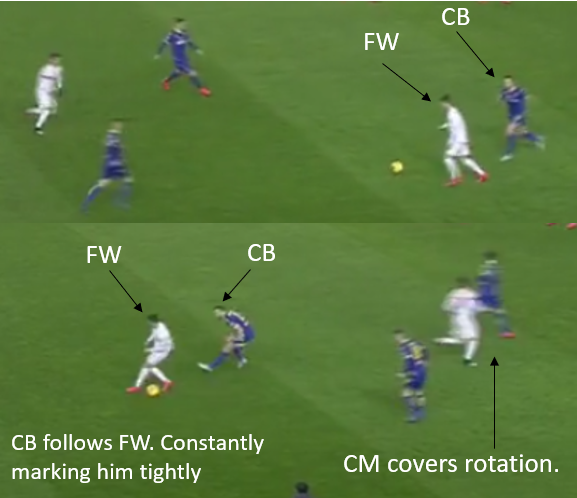 Man-oriented back threes are often complementary with man-marking during the opposition’s build-up, as the defense’s fluid positioning allows for quicker and more decisive actions should the press be successfully bypassed. In this system, the wing-backs remain deep to protect the defense and mark their corresponding wingers; however, when the opposition fullbacks go forward, they have the potential to exploit the defenders’ individual freedom by overloading the flanks. To solve this problem, the wing-backs must move to mark the fullbacks, whilst the center backs must focus on nullifying the wingers.

Against Stefano Pioli’s Milan, which set up in a 4-3-3, Atalanta man-marked every central player, forcing the Rossoneri to progress the ball via their fullbacks. By cutting off central passing routes, Atalanta funneled Milan’s build-up to the wide areas. When Milan did manage to advance into dangerous areas, Atalanta’s wing-backs pressed the opposing fullbacks, cutting off potential uncontested routes of progression and eliminating space on the flanks. 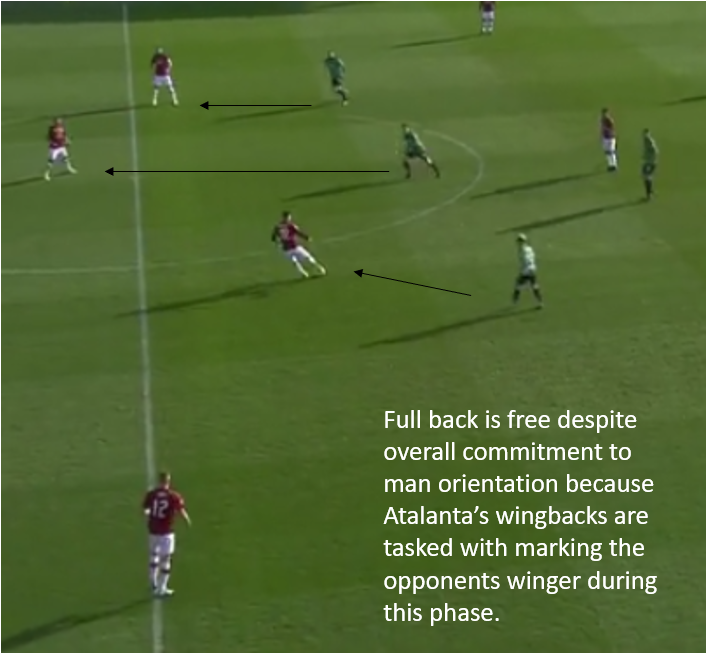 This combination of aggressive pressing and tight marking can help create chances for the side that uses the man-oriented scheme. In the case that the wing-back wins the duel, they can quickly transition into a dangerous attack by capitalising on open space in behind.

It’s a high-risk, high-reward system: if they do manage to win possession from the fullback, they can immediately launch a counter and find their forwards in dangerous areas. If they don’t, the opposing winger has plenty of space to dribble and threaten on goal.

Using a man-oriented back three provides for three advantages: it limits the time and space that the opposition has on the ball, it allows for space to be covered in between the lines, and it provides the team with opportunities to threaten on the counterattack. 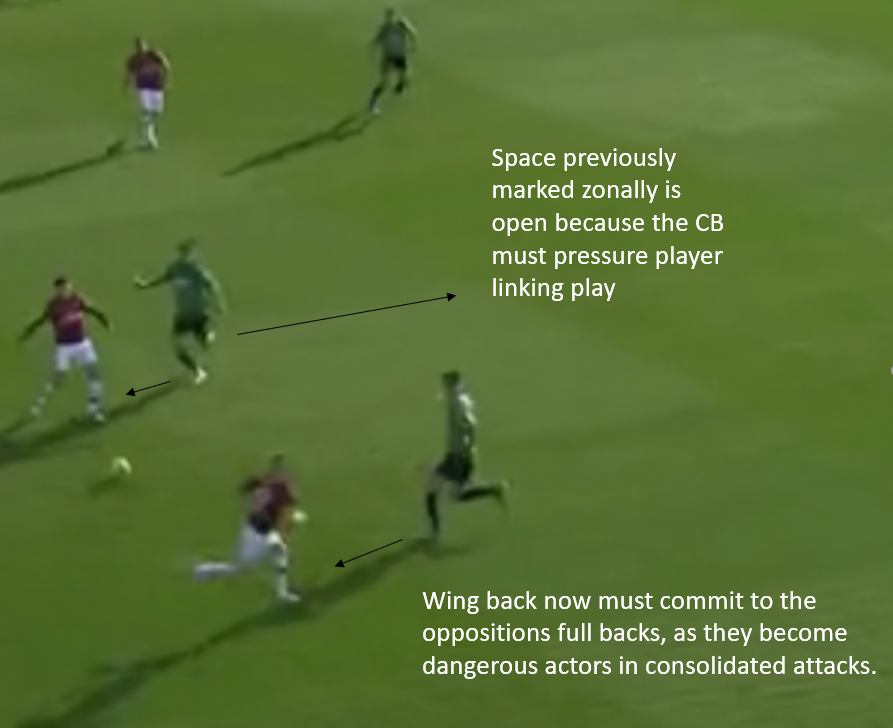 As previously mentioned, the man-oriented back three instigates an ‘organised chaos’ which can expose defenses to numerical disadvantages and put pressure on individual defenders to win duels and nullify attacks. However, defending, unlike attacking, requires a greater element of cohesiveness and interdependence; whereas attacks can be led by a single player, defending is more about a collective understanding of each other’s movements and positioning.

Lionel Messi can single-handedly drag Barcelona to three points with his individual brilliance, but while defenders can win games for their teams with last-ditch tackles or goal-line clearances, defense is far more predicated on chemistry than attack. In other words, a left winger failing to dribble past an opponent will result in a far less disastrous consequence than a center back failing to win a physical duel when space is left in behind.

In the example below against Walter Mazzarri’s Torino, Hellas Verona’s defensive structure is exploited when their center back loses a physical duel, causing Torino’s Álex Berenguer to have a free run inside.

Managers who utilize the man-oriented system place their trust in their center backs’ ability to win individual duels and limit the opponents’ time and space on the ball. Failing to do so can lead to situations where the defence is outnumbered and overwhelmed, and where heroic individual acts are required to stop the attack.

Both Atalanta and Hellas Verona have paid the price on multiple occasions this season due to these individual failures; not every team is blessed with Sergio Ramos or John Terry in defense, and any team that attempts to carry out this approach must also accept the potential risks.

This style of defending is inherently reactive, and it forces defenders to adapt to the actions of their opponent. Opposition attackers can easily exploit the man-oriented schemes by dropping their shoulder and spinning away from them and accelerating into space, or by switching positions with their teammate to throw the defenses off-guard.

We see this below, where Sergio Agüero drops deep to attract Rafael Tolói, and in turn, Kevin de Bruyne makes a run to exploit the open space. De Bruyne is always one step ahead of his opponent, and he will have a head start in the foot race with his opposing defender.

While man-oriented defenses can help extinguish short passes that are played into the opponents’s feet, they can also have dire consequences when the opponents make blind-sided runs to exploit the tight marking.

Man-oriented back threes are susceptible to leaving space in behind the defense, which can allow the opposition with high-quality scoring chances. The scheme is predicated upon preventing players from comfortably receiving possession, as opposed to protecting space, as tracking player movements take precedence over preventing gaps in the defense from arising.

There’s a reason why Atalanta have conceded the fewest shots in Serie A this season, but have conceded the 4th-most goals, and it’s because of this trade-off. They concede a low amount of shots, but the scoring opportunities that they do yield tend to be harder to defend against and easier for the opposition to convert.

Teams with fluid front threes are particularly effective as they can drag the defenses out of position with their rotations and overloads. These opponents can cause plenty of problems for teams such as Atalanta and Hellas Verona by manipulating the center backs’s positioning, dragging them deep, and penetrating the space.

Explosive forward movements from deep can exploit this weakness, generating numerically disadvantageous situations, as seen below. Achraf Hakimi and Raphaël Guerreiro were given license to roam forward from their wing-back positions, and as a result, wreaked havoc on both flanks against Schalke last weekend.

The primary weakness of using a man-oriented three is it that it requires defenders to be alert to the opponents’s movement, which, naturally, means that the defenders are always one step behind. Managers such as Gasperini and Jurić prefer their defense to stop attacks at its source, rather than preventing dangerous spaces from opening upThe loss of one individual duel can have far more disastrous consequences in a man-oriented system than a defense-oriented system, as the defenders are constantly reacting to a series of evolving events.

In conclusion, man-oriented back threes can be characterised by systems which force defenders to react to unfolding events, an approach that welcomes organised chaos and bets on its defenders to stop attacks at its root. By using a man-oriented approach in defence, teams can compensate for the space left in between the lines by using a high press. On the other hand, opponents can manipulate these systems by making decoy runs and positional rotations to drag out defenders and create space in behind the defense.

Man-oriented defenses can be extremely useful at sustaining pressure and forcing the opponent into uncomfortable areas by limiting time and space in possession, while the positional flexibility provided to the defenders allows for reactive covering. This system fits like a glove for high-pressing outfits such as Gasperini’s Atalanta, but it can also lead to dire consequences against effective opposition, in particular against teams that boast fluid front threes, such as Borussia Dortmund and Manchester City.