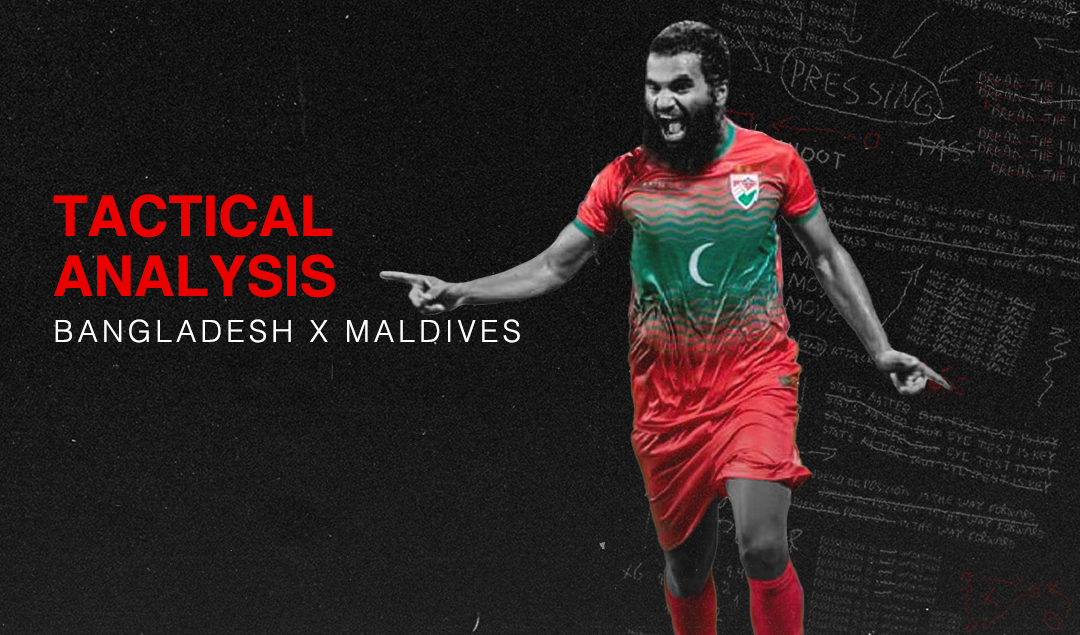 Bangladesh, who had not reached the SAFF Championship semi-finals in 12 years, arrived in the Maldives with the goal of winning the championship for the first time since 2003. Most football fans were skeptical about how the team would perform even before the tournament began, following the appointment of Oscar Bruzón to replace Jamie Day as the new national team coach.

However, a 1-0 win over Sri Lanka in their opening encounter and a 1-1 draw playing the last 40 minutes with ten men against powerful India paved the way for Bangladesh to reach the final. If Bangladesh had won their third match against the Maldives, they would have been much closer to the final, but the skeleton condition of Bangladesh was exposed once again in the Maldives encounter.

Bangladesh never came close to the Maldives throughout the game, losing 2-0. Bangladesh will have to depend on the results of other teams to reach the final if they can win their final group match against Nepal, as a result of their loss against the Maldives. 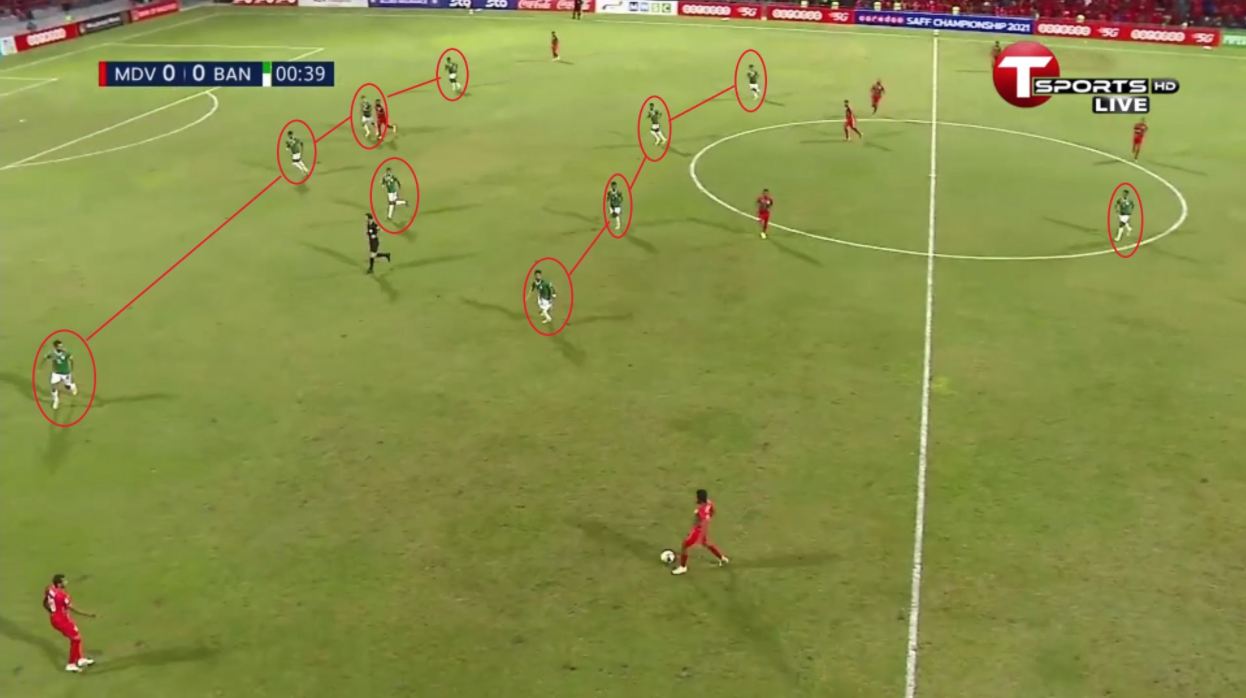 In this encounter, Bangladesh used a 4-1-4-1 shape. Due to the suspension of regular right-back Bishwanath Ghosh, right-winger Saad Uddin was spotted playing in the right-back position. Rahmat Mia was seen playing right winger while playing fullback on a regular basis. Sohel Rana and Biplu Ahmed were the two box-to-box midfielders, while Matin Mia was the lone striker.

Biplu and Md. Ibrahim were the box-to-box midfielders in the previous two matches. Ibrahim used his speed to create a threat by running behind the defense, taking advantage of the gap created by Matin. During this encounter, Ibrahim was featured on the left wing.

Because Sohel Rana prefers to play as a holding midfielder, he has not been spotted taking a forward run off the ball once during the entire game, which is why there’s no additional man in the final third. As Matin’s positioning was also predicted, he couldn’t create a threat on his own.

On the other hand, Maldives played in a 4-2-3-1 formation. Their defensive midfielder made a three-person backline by dropping between two centre-backs. In this way, the two fullbacks pushed higher up on the pitch and created 2v1 on the wings in the final third.

Bangladesh was 4-3-3 flat on the ball throughout the match. Even during build-up from the back, no midfielder took part in the build-up by dropping back from midfield to defence. That’s why goalkeeper Anisur Rahman Zico or two centre-backs have had to play blind long balls repeatedly. 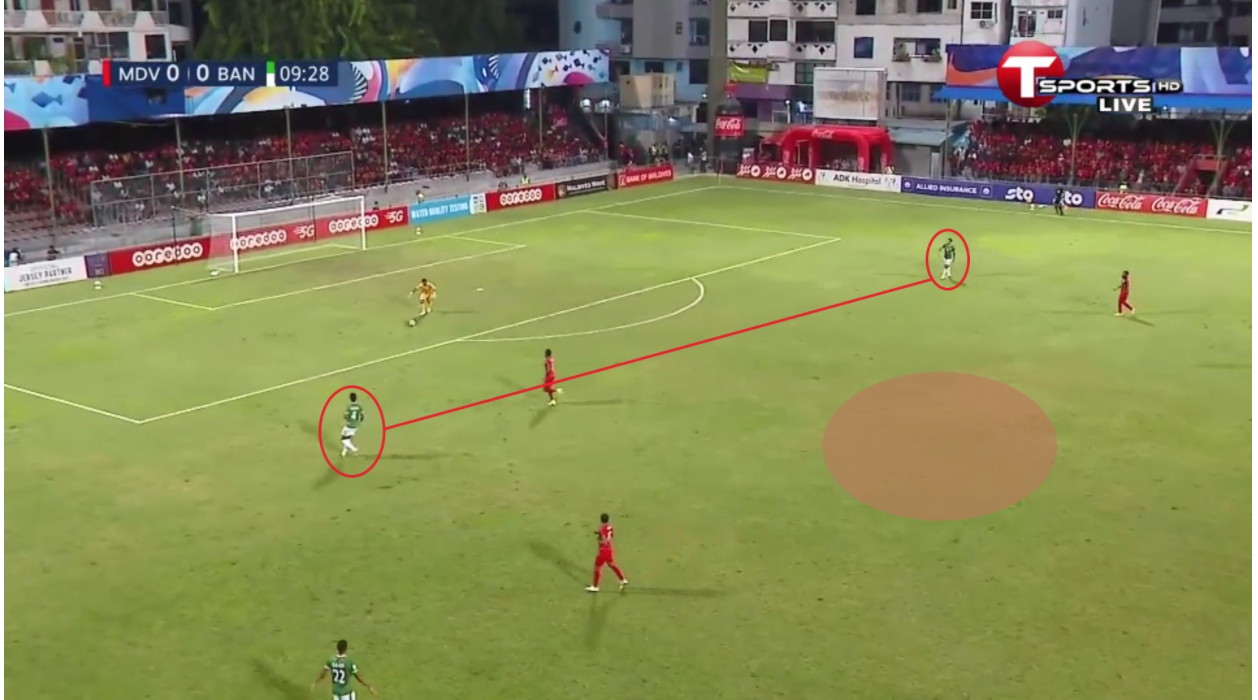 In the picture above, two centre-backs moved through the wide areas and dragged the two Maldivian forwards towards themselves while Zico had the ball at his feet. This creates free space in the centre area outside the box. But Jamal Bhuyan, who played as a single pivot, did not drop back from midfield, which is why Zico had to play the long ball. However, as the aerial ability of Bangladeshi footballers is fragile, Zico was able to attempt only two successful long balls through the whole match. 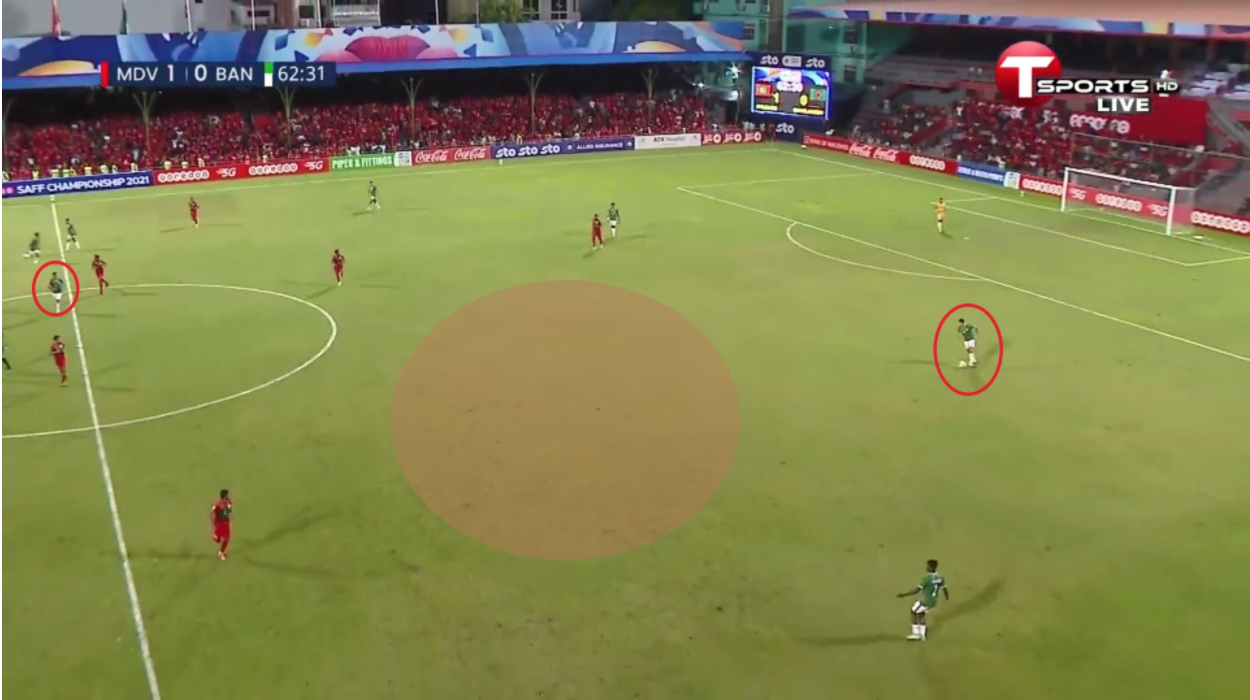 During the build-up from the back, Jamal positioned himself near the half-line without dropping in the defence, and as a result, a huge free space was created in between Bangladesh’s defence and midfield line. As there was no ball progressor between the lines, many passes or blind long balls had to be played to advance the ball from the back. 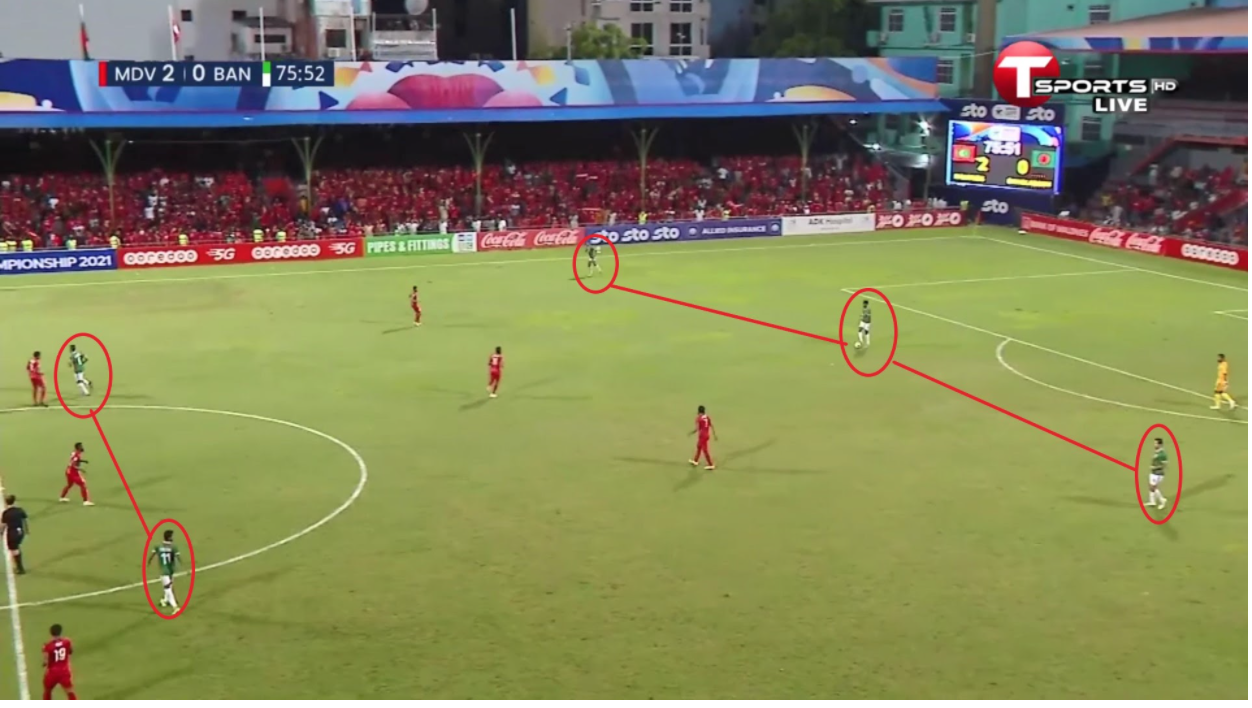 Neither of Bangladesh’s two midfielders Jamal or Sohel dropped to the defence during the build-up from the back. That is why it was tough for the defenders to progress the ball by bypassing the final line of Maldives’ forwards. 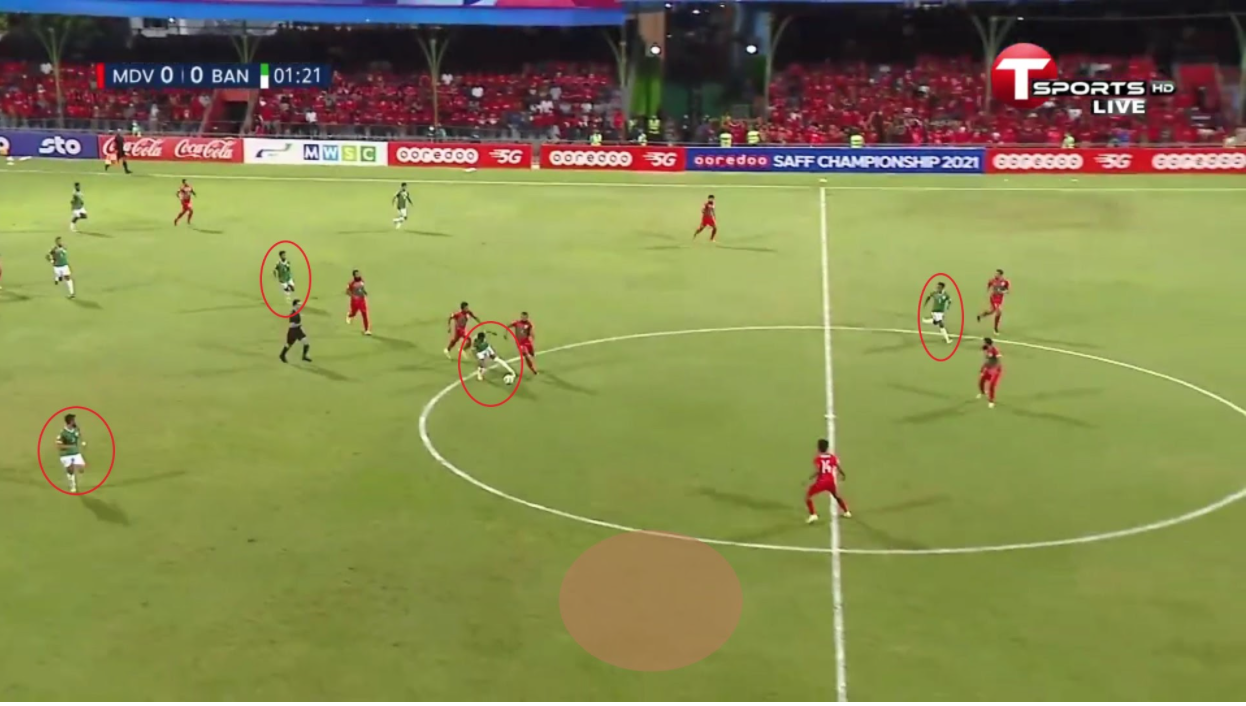 When Sohel Rana tried to move the ball forward from midfield, two Maldivian midfielders started pressing him; neither Biplu nor Rahmat made a forward move, so there was no passing option in front of Sohel. That’s why he lost the ball possession. 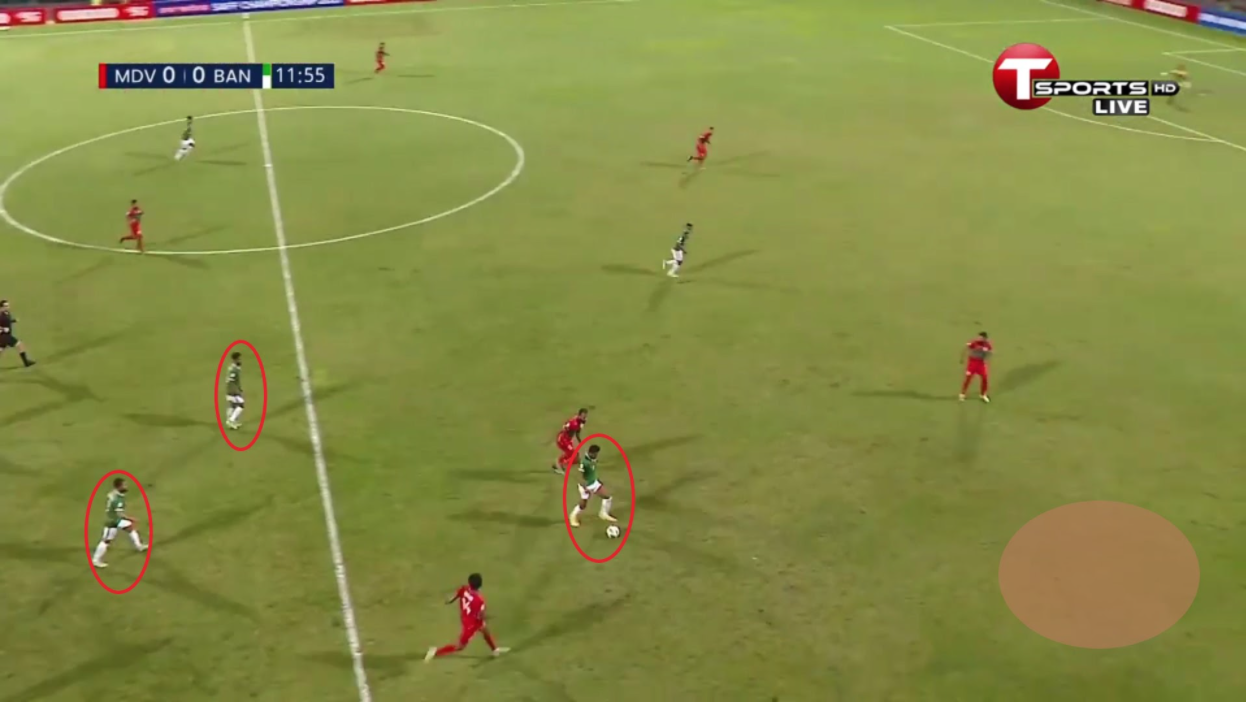 Sohel Rana tackled and regained ball possession as soon as Ali Ashadh received the ball from Hamzath Mohammed’s backpass and started to move forward. However, neither Biplu nor Rahmat attempted a forward run through the right flank that time. Ashadh stopped Matin’s passing area, forcing Sohel to give a backpass. However, as the Maldives’ fullback was out of position at the time, the wing area was totally open. 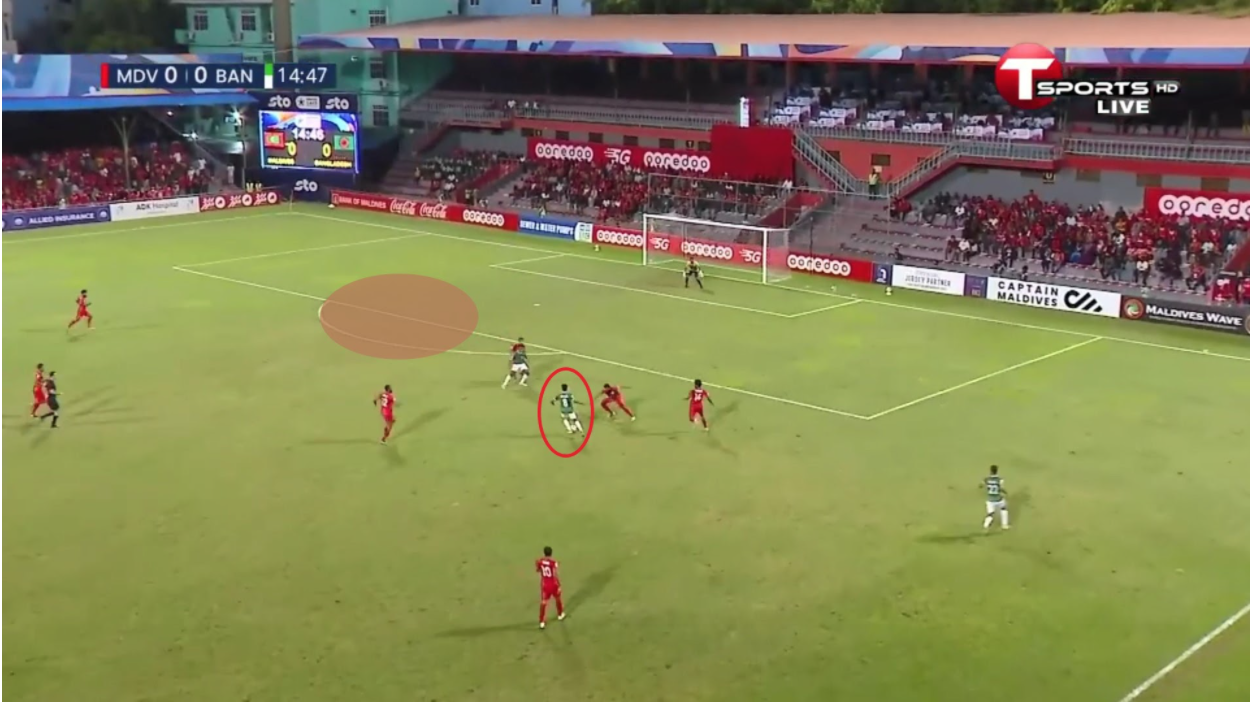 Saad passed Biplu from right out of the Maldives box. At that time, the Maldives’ defensive line was disorganized. Only Matin was in front of Biplu, but Matin was marked tightly by Akram Abdul Ghanee. That is why Biplu had no good passing option. But with the Maldives right-back on the highline, Ibrahim had a chance to take a potential goal-scoring opportunity if he took a run through the left. 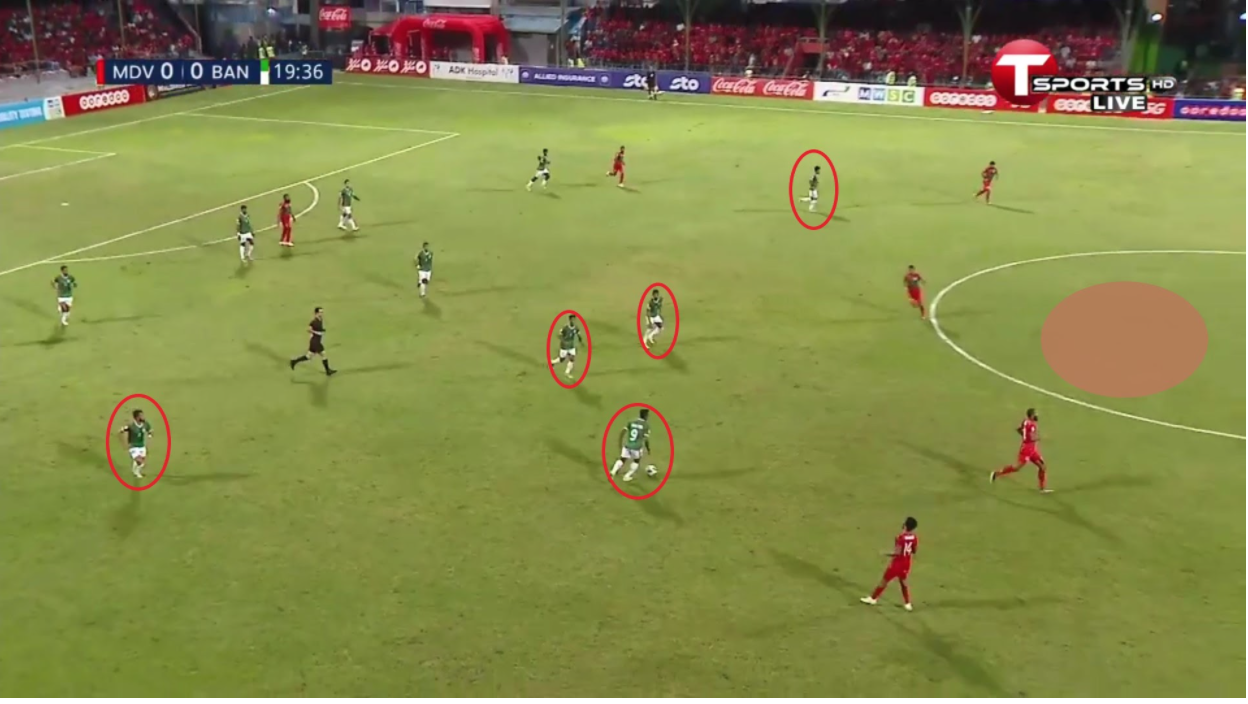 Again, when Sohel Rana intercepted Ashadh’s pass, a lot of free space was created in front of Matin. Matin moved the ball forward with his feet, but no one else showed interest in taking the run. That is why that time too, Matin has to give a lateral pass targeted to Biplu. 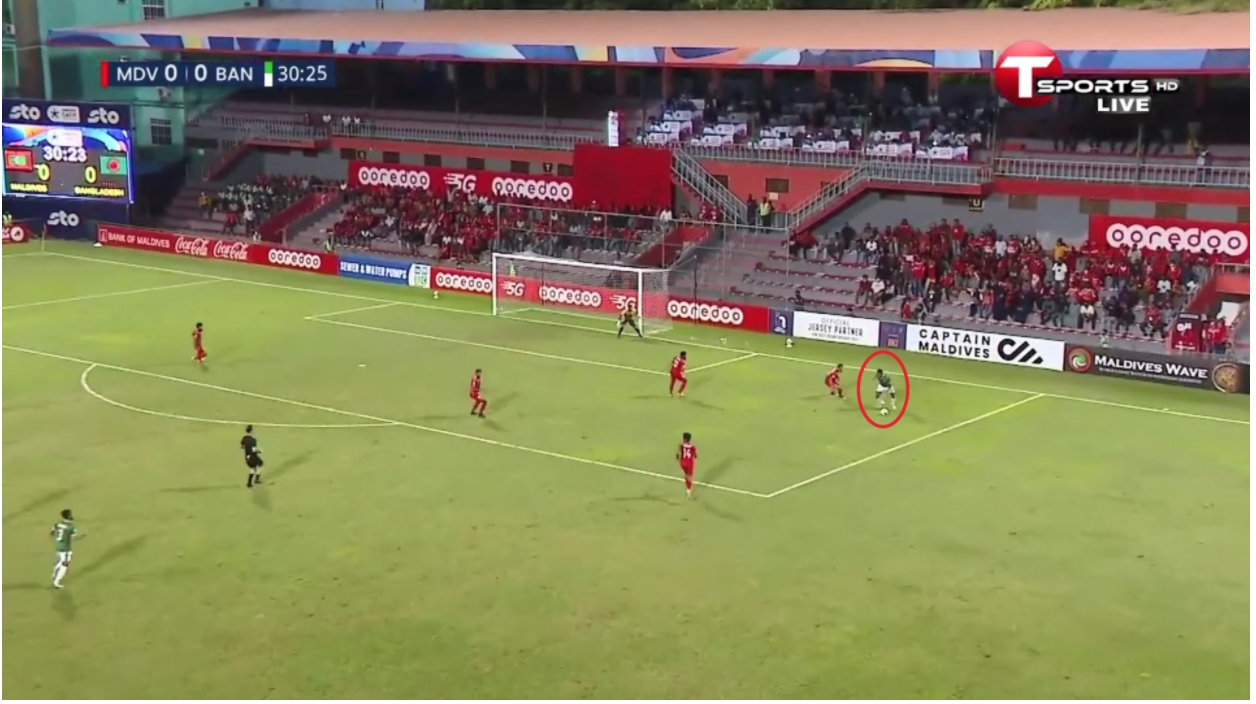 Rahmat made an excellent through-ball targeting Matin’s vertical run, when the opportunity to stay in the high line of Maldives left-back Haisham Hassan moved high up on the pitch. Matin took control of the ball and entered the Maldives box, but no one came to the box to create his passing channel. Ibrahim took a run in the box, but it was too late; Maldives’ defenders had got enough time to organize the defence by then. 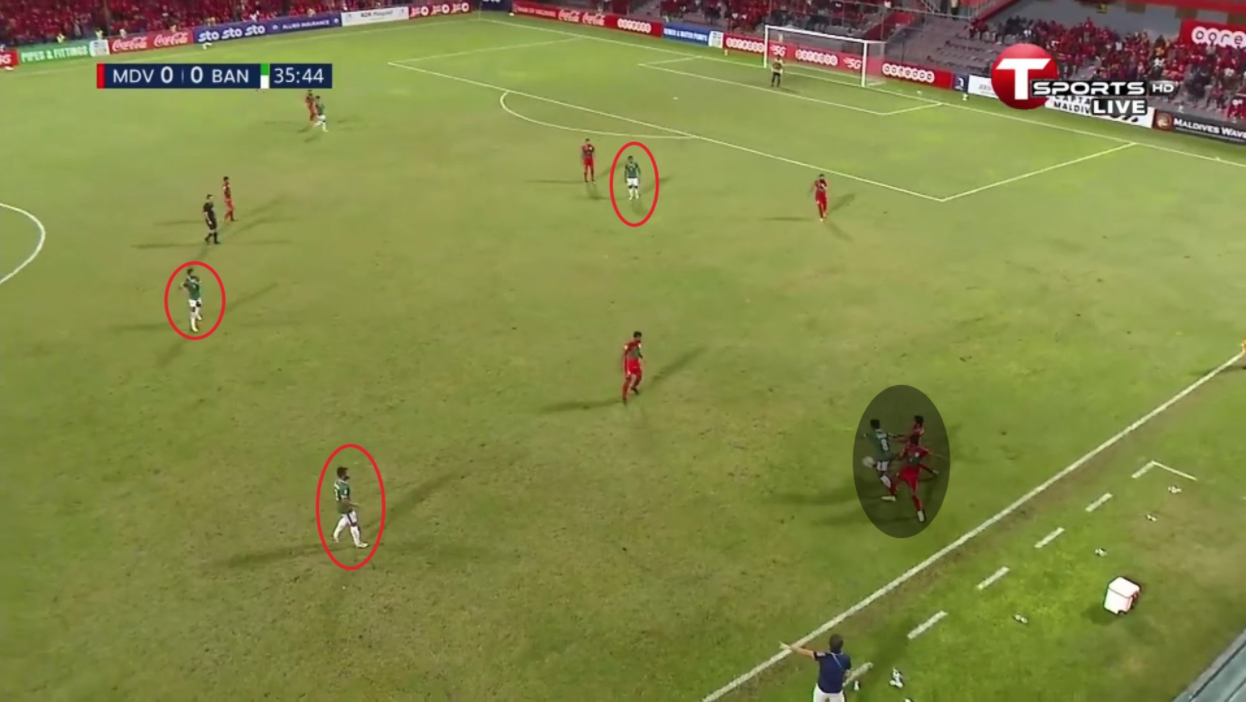 Biplu took a forward run with the ball through the right half-space, but no one moved to create his passing channel. Ali Fasir and Hassan then pressed him directly and tried to retrieve the ball. Rahmat, Sohel and Matin all took positions in the free space, but no one came near and tried to shield Biplu. 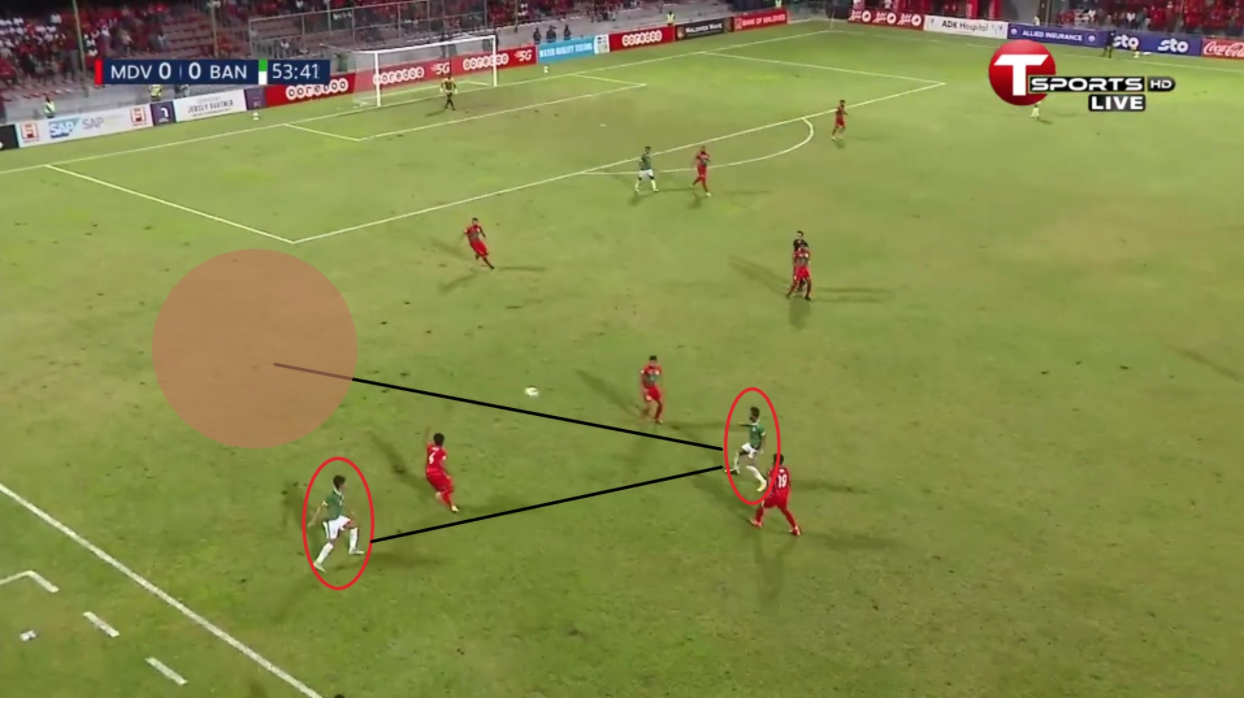 From Ibrahim’s pass from the left-wing, Sohel made a quick one-touch diagonal forward pass that surpassed the Maldives midfielder and left-back, exposing the wide area. But Ibrahim did not make a forward move, which ruined the chances of another potential attack. 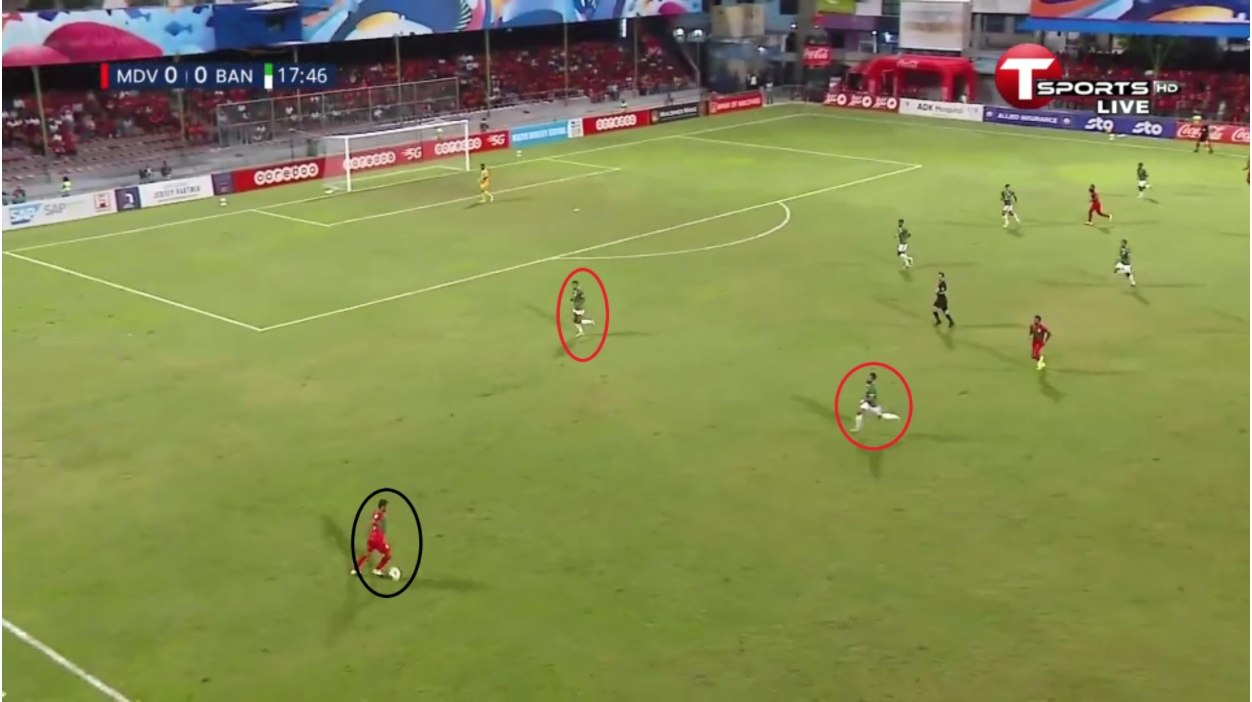 The Bangladeshi footballers were overloading the playing area when they were in off the ball. When the Maldivian midfielders switched the ball from the midfield, there was a lot of time and free space to make a quick move by receiving the ball for the wing-backs. 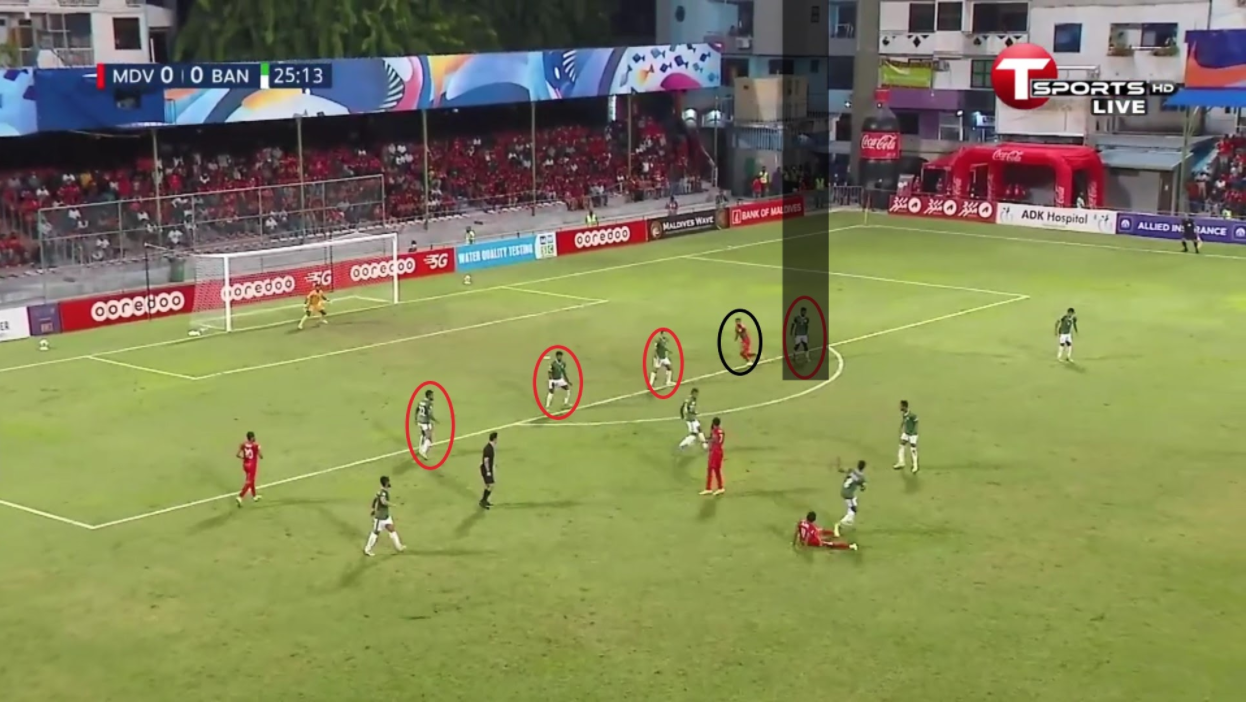 Ali Fasir’s through pass found Ibrahim Mahudhee Hussain outside the Bangladesh box in the left half-space. Despite the fact that Yeasin Arafat had marked Ibrahim at the moment, he did not track him, nor did any centre-back attempt to intercept the ball. Bangladeshi goalkeeper Zico, on the other hand, intercepted Fasir’s through ball before Ibrahim could receive it; otherwise, Bangladesh would have been down 1-0.

The two full-backs of Maldives overlapped in the final third, creating 2v1 with Bangladesh’s full-backs. The two wingers were cutting in through the centre area, acting as inside forwards. As a result, two full-backs of Bangladesh, Saad and Yeasin, were repeatedly confused about whom to mark. Right-winger Rahmat was taking his position in the defensive third’s half-space without tracking Maldives left-back Haisham Hassan; left-winger Ibrahim was also taking his part outside the box without marking the right-back. 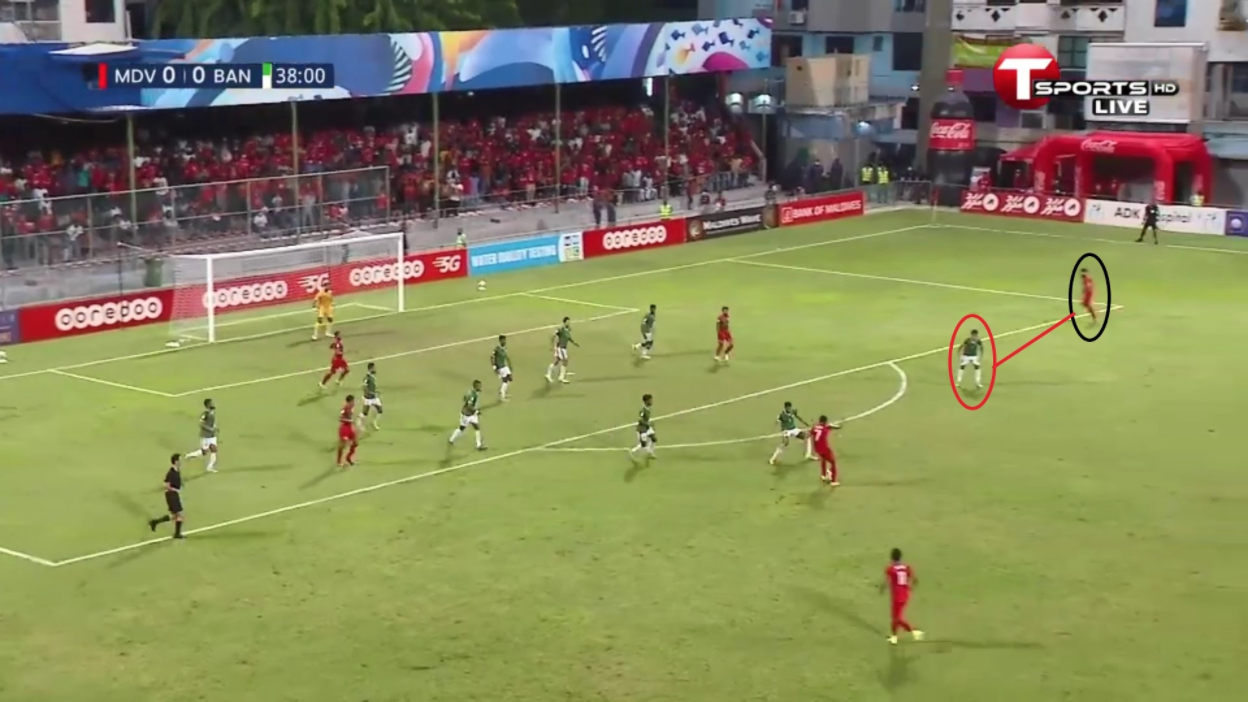 In this above image, Maldives right-winger Ibrahim was marked by Yeasin, but right-back Hussain Yusuf was completely unmarked. That’s why he received Ali Ashfaq’s long through ball from Zone 14 and got enough time to circulate the ball. 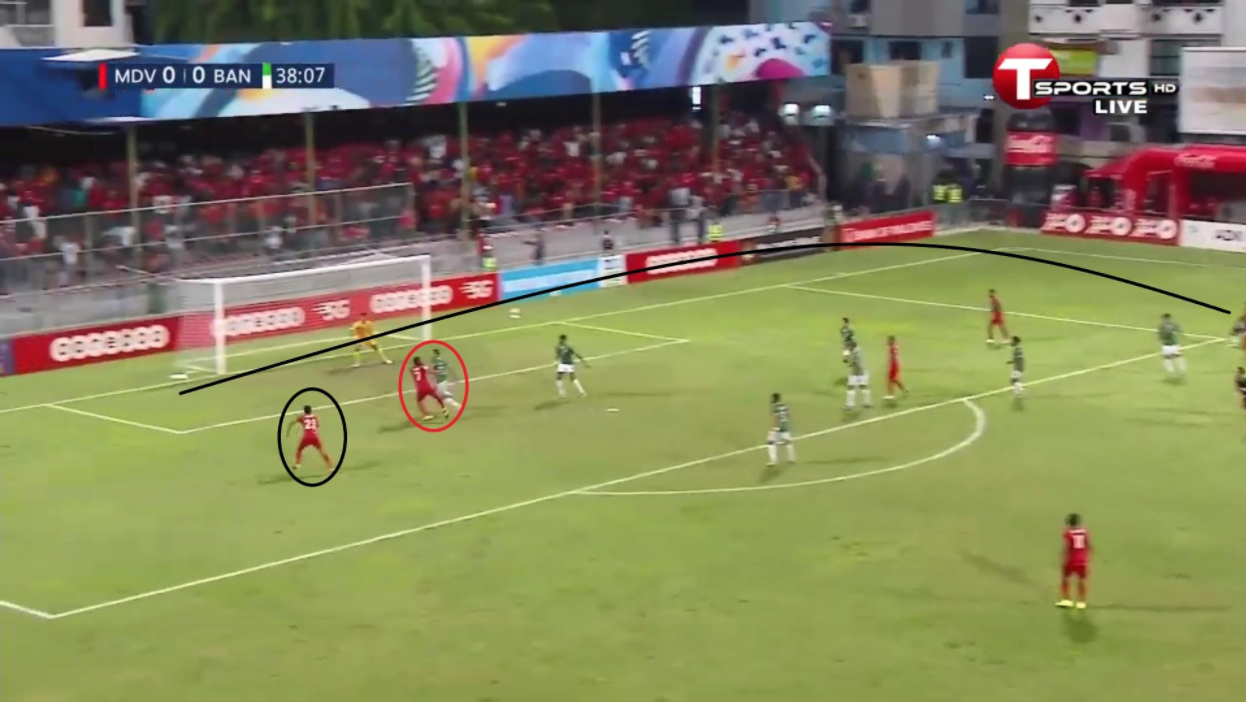 Again, on the right side of the Bangladesh box, Ashfaq and Hussain Nihan created 2V1 with Bangladesh’s right-back Saad Uddin. Although Saad marked Ashfaq, Nihan was completely unmarked. However, Yusuf could not receive the cross; otherwise, there was a good chance of scoring a goal. 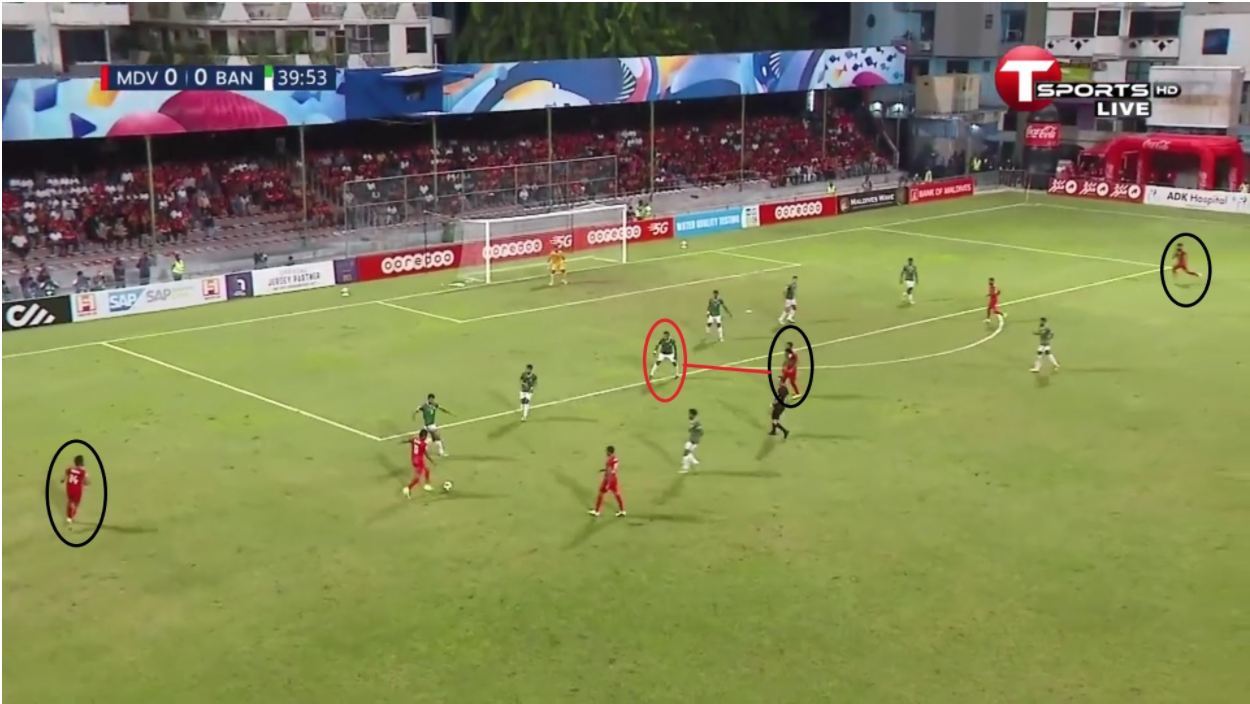 The two fullbacks of Maldives are man-marking free in two flanks outside the box of Bangladesh. Ali Ashfaq has made space by dropping a little deep from his line, Jamal has tracked him, but he has quite a distance with Ashfaq. 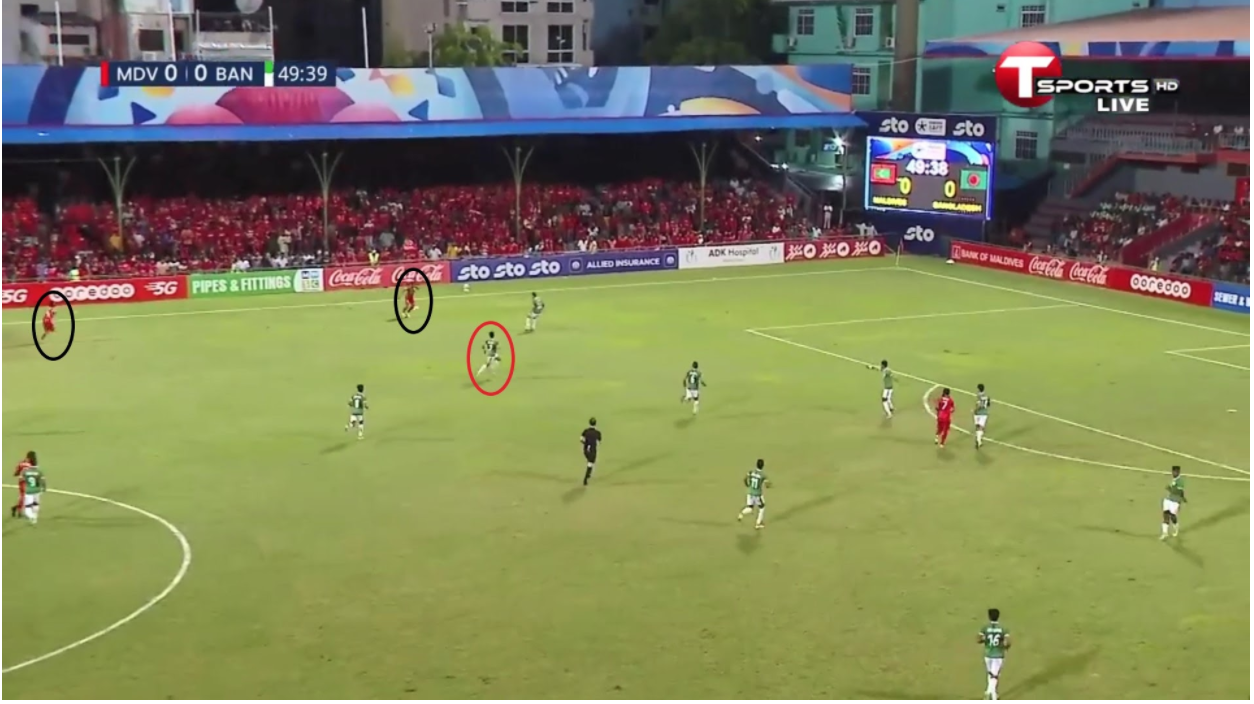 When Hamzath took a forward run with the ball on the left flank, Saad pressed him. Meanwhile, left-back Hassan made an overlapping run near the touchline, while Bangladesh’s right-winger Rahmat moved to cover the defensive third’s half-space area instead of tracking him. But then there was no Maldivian footballer in the half-space area.

Bangladesh defensive midfielder Jamal Bhuiyan was defensively vulnerable throughout the match. Maldives midfielders have been able to rotate the ball quite comfortably outside Zone 14, with Jamal Bhuiyan not seen pressing much. Although Jamal has done well in the double pivot role in the past, he performed very fragile in the single-pivot role. 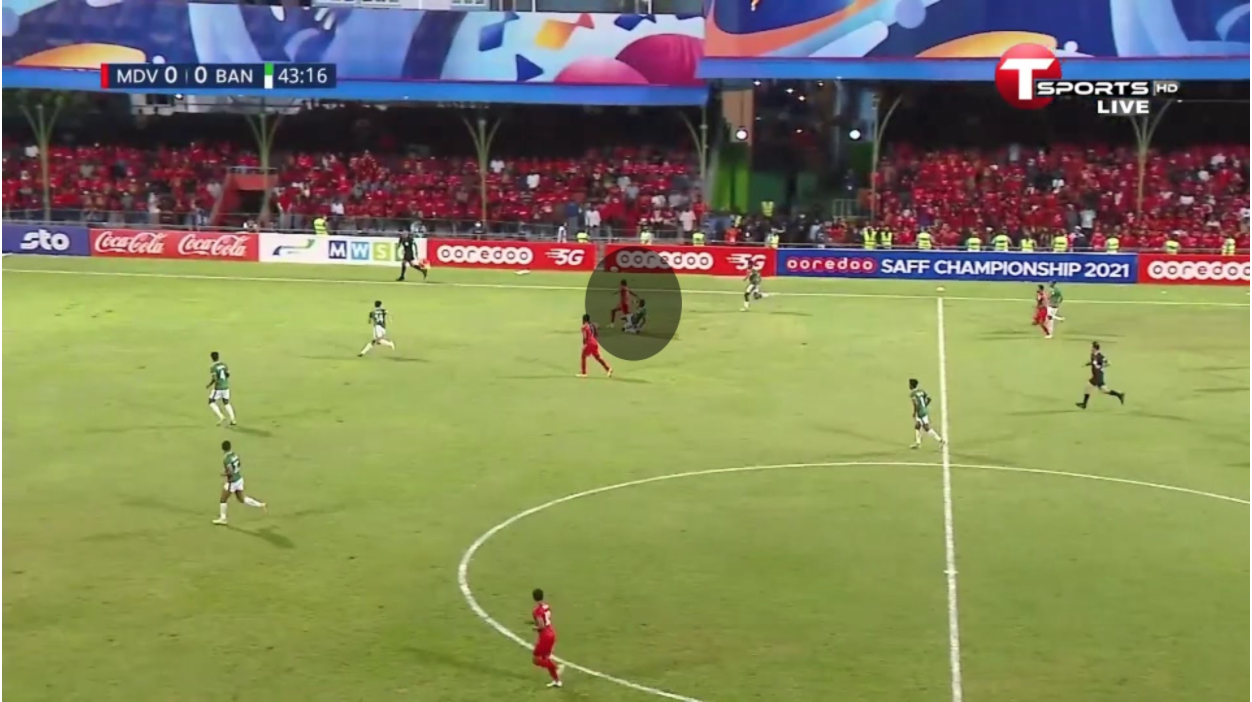 In this image, Ali Fassir receives the ball from behind Jamal and makes a forward run past Jamal, Jamal’s weak slide tackle could not stop him. 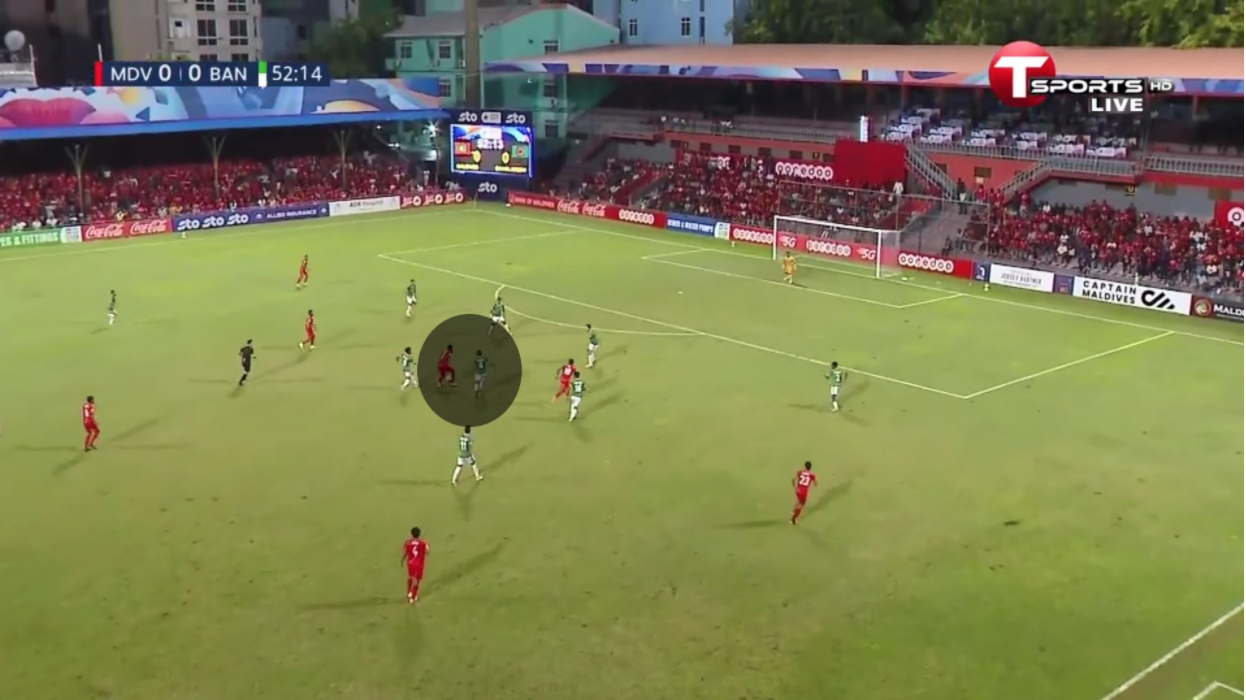 Ashfaq moved forward from Fasir’s pass near zone 14, but Jamal did not press him at all. Biplu tried to press him, but however, Ashfaq gave Hamzath a diagonal pass on the left. 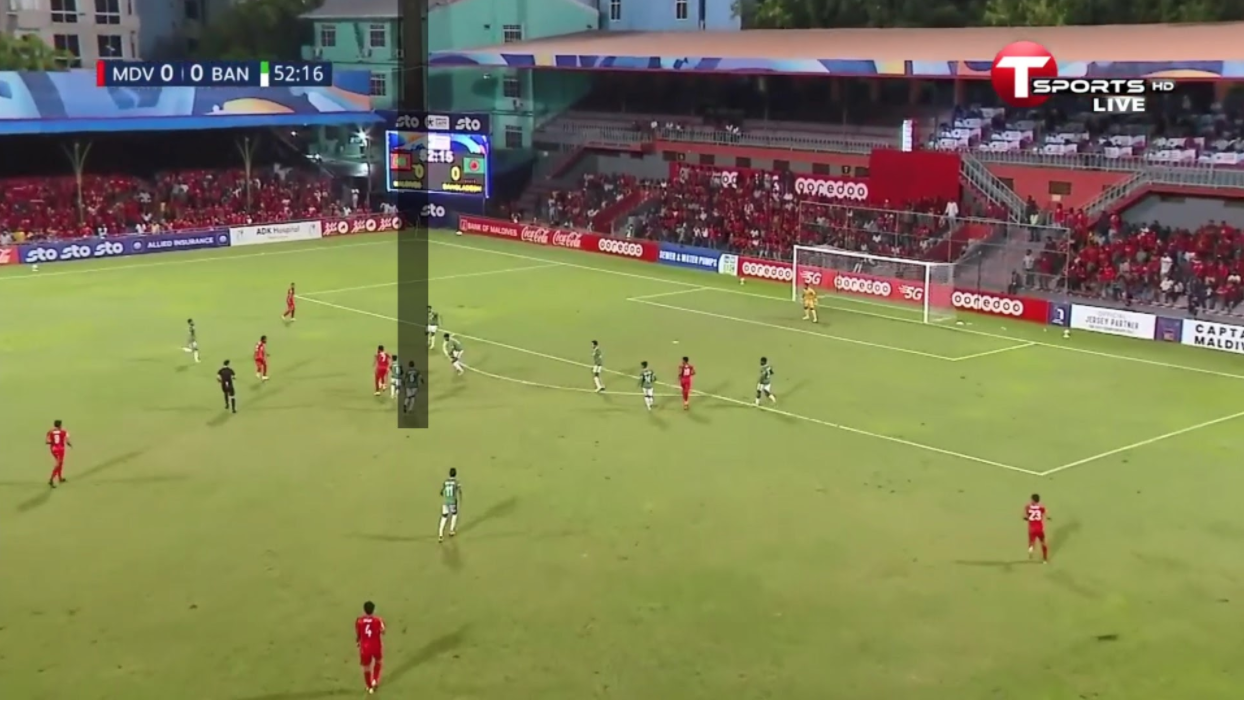 Many people were bating their breath for a win against Maldives, which came after a long 17-year drought, as Bangladesh offered a positive football display in their first two games. However, Bangladesh’s weaknesses are as clear as day as seen in this match. Bangladesh’s footballers seem unable to compete in any way with the Maldives, and even in the technical battle, Maldivian coach Ali Sujain defeated Óscar Bruzón comfortably.

The South Asian Football Federation Championship Final will take place on October 16, and Bangladesh will not only need to defeat Nepal but count on other results in order to assure their progression to the Final. Nepal are perfect so far with two wins in two games, whilst Bangladesh, who have played one more match than the Maldives, sit one point above the Maldives in second.