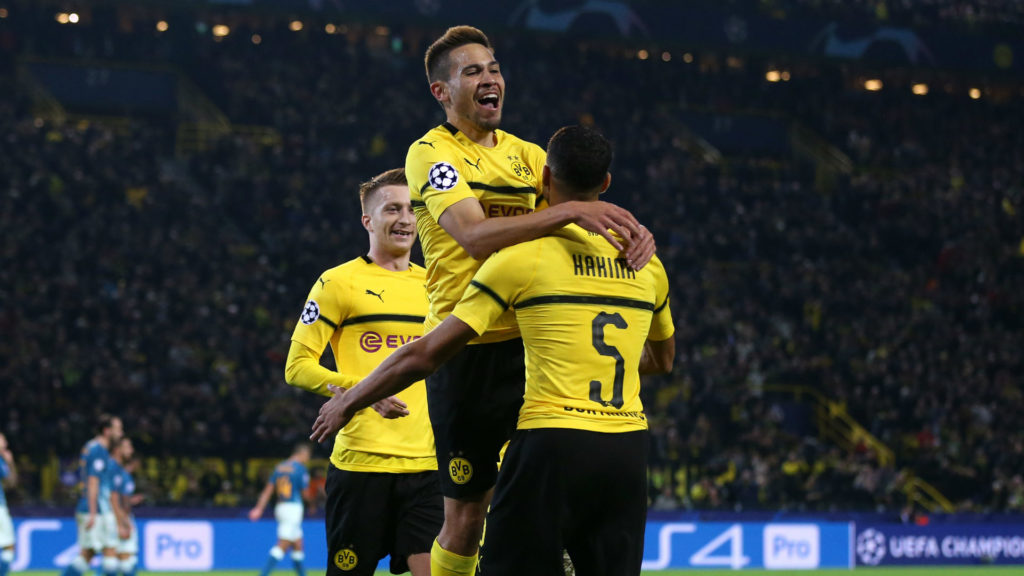 After barely squeezing into the top four in the final weeks of the season, Borussia Dortmund had arrived at a crossroads last summer. The glory days of Jürgen Klopp and the relatively short-lived tenure of Thomas Tuchel had brought trophies and beautiful football to the Westfalenstadion, with both young coaches establishing themselves as amongst the best in Europe while at North Rhine-Westphalia. However, the previous season had been a failed transition year, one in which the club didn’t move forward or even stagnate, but move backward. They crashed out at the Champions League group stage, before losing to RB Salzburg in the Europa League Round of 16. They beat out Leverkusen and Leipzig, among others, for the final Champions League spot, but it was clear as day that they needed a new manager, someone who could deliver both top results and top performances.

With Tuchel leaving in the summer of 2017 due to a dispute with the board, Dortmund approached Lucien Favre, who, after successful spells at Hertha and Mönchengladbach, had guided Nice to third place. However, Nice blocked Dortmund’s approach, causing them to look elsewhere. They appointed Ajax coach Peter Bosz, who lasted until December, and then Peter Stöger, neither of whom convinced the fans nor the club. Dortmund went back in for Favre in the summer of 2018, and this time, they got him.

Under Favre, Dortmund have been one of the best teams in Europe this season. They sit atop the Bundesliga, seven points above second-place Mönchengladbach and nine above third-place Bayern. They topped their Champions League group, even beating Atlético Madrid 4-0. Alongside Liverpool and Juventus, they’re the only team who hasn’t lost in the league yet. The results speak for themselves: Favre has transformed Dortmund.

Apart from bringing in Favre, Dortmund bolstered their squad with a productive transfer window. Thomas Delaney and Axel Witsel have formed a solid partnership in the middle of the pitch, Achraf Hakimi and Abdou Diallo have slid into defense, while Jacob Bruun Larsen returned from his loan spell to break into the starting line-up. In addition, Marius Wolf and Marwin Hitz have been reliable squad players, while Paco Alcácer is perhaps the hottest super-sub in football right now. Favre has gotten the most out of his squad, delivering both the red-hot results and the phenomenal performances that Dortmund fans yearned for last season.

Organisation on the ball and build up

BVB play in a 4-2-3-1, but the quality and depth of their squad allows Favre to change his formation on occasion and chop and change line-ups. They’re not advocates of dictating possession but strongly believe in building out of the back. The centre backs and the double pivot dictate the ball in the majority of the build up until a free man is open to be played to. A common pattern for Dortmund’s build-up is that they play the ball to the wings where the fullbacks and the wide midfielders combine, overlapping and creating cutbacks on the flanks or going through the middle. In the build up, they focus on playing out of the back, but they don’t take the risk if the pivot and the goalkeeper is under pressure. When a team is likely to press higher, Dortmund maintain the system and focus on creating space in the wings. They are skilled at playing through waves of pressure and creating chances.

Dortmund’s team often plays in a medium/high block, aiming to force the opponents’ build-up on the wing and trap the players in 2v1s. 442 is really good at trapping teams on the wing, As we saw with Barça’s 4-4-2 last year, the 4-4-2 is an effective defensive formation that nullifies rival build-up on the wings. Defensively, Dortmund play a medium 4-4-2 block with Götze or Reus blocking the back pass, limiting passing options and leading errors when a team lacks composure and isn’t press resistant.

In addition, Dortmund’s defenders work to prevent opposition build-up through the middle. When the rival winger retreats, the full back will step out onto the winger to block him back to goal (usually Hakimi). In doing so, they force the opposition out wide and then trap them there. The 4-4-2 allows every opposition player to be marked and controlled, an undermined advantage of a 4-4-2 which the 4-3-3 does not offer. The compactness of the block allows free and creative players to be controlled/limited between the lines.

In order to execute this system, not only does the team have to be tactically balanced, but their fitness has to be top quality as well. Off the ball, they must harass their opponents as much as they can with high intensity pressing. With a medium defensive line, the gap between defense and midfield is narrow, meaning the forwards have to be fully involved in the defensive work.

However, every system has a weakness that teams can exploit, particularly when it comes to off-the-ball positioning; if the fullback is late in closing down his winger, there is space unprotected in behind, free to be exploited.

Favre is obsessed with maintaining Dortmund’s high-intensity running, and in order to manage the rhythm of the game, as well as keeping his players energetic during the final minutes, the Swiss coach has made use of his stacked squad, rotating and keeping his players fit and firing. However, rotation is not a panacea, and while they’ve been lucky with injuries this season, there’s no guarantee that luck will hold out for the Rückrunde. Even if his stars manage to avoid the treatment table this season, Favre must ensure he continues to rotate and make early subs if he is to maintain his squad’s energy as the fixtures intensify.

On the break, Dortmund have the pace and quality to rival Europe’s finest. They are reliant on individual talent to beat players in 1v1 situations, with Jadon Sancho and Christian Pulisic offering plenty of creativity on the wing. Teenage talent Sergio Gómez as well as likely January signing Pedrinho will offer even more ammunition in creative talent.

Injuries have eroded Marcos Reus’ pace, but he’s still the talisman of Dortmund’s attack due to his high footballing IQ, technique, passing, and finishing. For this system to succeed, there must be build-up that frees up wingers, as well as attackers making dangerous runs into goal. An important automatism that Dortmund have grown accustomed to under Favre is to play transitions from players with their back to goals in order to progress and create chances, often with ‘one two’s.’ We’ve seen this with Chelsea this season, playing the ball from Jorginho, to Giroud, then Jorginho again playing it to a man making the run in behind, usually Hazard or Alonso.

Dortmund’s counter-attacking effectiveness is due in part to their energy in the closing minutes of the game. They scored three goals against Atlético Madrid in the final 20 minutes, and late wins against Augsburg and Leverkusen are a testament to this side’s remarkable energy. They still have four players making runs in behind the defense with two minutes left; opposition defenders do not have a moment to rest.

When the ball is lost, BVB immediately counter press with a man orientation and cover. Thanks to the compact set-up, Dortmund can easily counter press, win the ball high up the pitch, and carve out dangerous chances. However, if the counter press doesn’t work, the centre backs need to be focused to extinguish any dangerous 2v2 direct counterattacks.

With the build-up mentioned, the majority of Dortmund’s chances (80%) come from the wide areas. The result of combining on the wings leads to dragging players in and opening up space for areas in the half-space. We saw this a lot against Atlético Madrid.

Both teams initially looked to suffocate build-up through the middle, causing the game to be directed towards the wings. However, after Delaney exited due to injury, Mahmoud Dahoud changed the course of the match. He helped them progress play through the middle with his dribbles, in a match which looked like Favre was aiming to beat Diego Simeone at his own game: pragmatism.

With Witsel putting Dortmund ahead before the break, Atlético sought to chase the game, and Simeone subbed Rodri on for Thomas Partey. Not only did Atleti expose themselves in wide areas, but they also allowed Dortmund to build through the back easily and connect in the final third. Dortmund overloaded Atleti’s midfield pivot, and did so with greater success after Simeone withdrew Saúl for Ángel Correa.

Not many teams can open up Atlético’s half spaces that easily, but Dortmund did it as if it was a training session. They overloaded the wings, with the front four combining superbly, heavily relying on one-touch passes and cunning off-the-ball movement. Apart from their chemistry, though, Dortmund have stood out thanks to their conversion rate: they’ve scored 39 goals in 14 league matches (2.8 goals per game), and they boast a conversion rate of 23%. On the other hand, Bayern’s conversion rate is 9%.

Against Stuttgart at the Mercedes-Benz Arena, Dortmund dominated from start to finish. They began the game with a 3rd minute goal from Jadon Sancho and finished it off with a 85th minute goal from Maximillian Phillipp. Since Stuttgart presses high, Dortmund found their wingers and fullbacks in space; all four of their goals came from the flanks. They exploited the half spaces well, and Stuttgart looked clueless from the first minute on, nothing like the team that was fighting for Europa League spots last spring.

Dortmund’s wingers tracked back into defense when needed, and once again, their compact defensive shape facilitated their counter pressing. Götze did well to block the passing lanes into midfield, whereas Alcácer applied pressure to the centre-backs and sought to prevent the goalkeeper from playing out of the back. With a high defensive line, they gave Stuttgart very little space to exploit, keeping each opposition player under wraps. A couple of their goals in the game came from intense counter pressing and extra defensive efforts off the ball from the attack, applying pressure to Stuttgart’s build-up. It was vintage Favre: ruthless domination, balanced possession, and running up the scoreboard for fun.

While the Stuttgart match was Dortmund’s most impressive performance of the season, the Atlético match was their most impressive result. Dortmund walked all over Atleti, handing Simeone his most lopsided defeat in his seven-year reign at the club.

“Dortmund are one of the best teams in Europe at the moment,” said Simeone in a press conference. “They were forceful and counter-attacked perfectly.”

While Achraf Hakimi joined Dortmund having largely played right back for club and country, he has mainly lined up at left back for Favre’s side. With pace, power, and finesse, Hakimi often began from wide positions before cutting in diagonally to link up with attackers and carve out clear-cut chances. He was focused defensively, and going forward, he was flawless, chipping in a hat-trick of assists. The young Maghrebi defender picked up the ball and charged into Atleti’s half spaces with sharp, direct diagonal runs, associating with his wingers with quick one-touch passes and well-timed runs.

Furthermore, Dortmund found success on the wings thanks to the introduction of Raphaël Guerreiro. Jacob Bruun Larsen has been a mainstay in Favre’s side thanks to his physicality and defensive work, but when asked to create against Atlético’s low block, he had no answers. The introduction of the Portuguese jack-of-all-trades added another inverted fullback to Favre’s puzzle. Guerreiro often won the ball high up the pitch, played it to an open man, and charged inwards to overload Atleti’s midfield, creating more space for Hakimi to run into.

There’s something that can’t be quantified, something that makes Dortmund one of the best teams in Europe today: relentless intensity. The tempo doesn’t decrease as the game goes on; they just keep at it. The intensity at the end of the match. The tempo and intensity isn’t lowered towards the end of the match, they just keep going, both defensively and offensively. Chances are, they won’t stop until they lift their first Bundesliga trophy in seven years next spring.