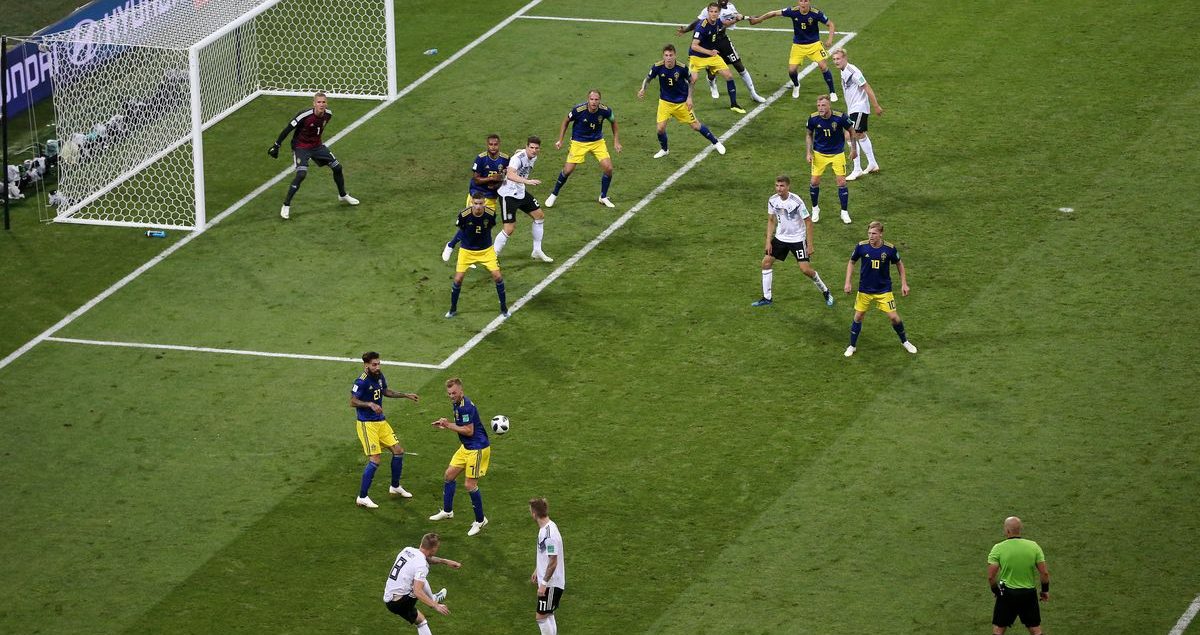 In one of the best group stage matches of the 2018 FIFA World Cup, the defending champions Germany took on Sweden in their second group stage match. Both European teams were coming off different scenarios in their first match in Group F; Sweden was fighting to advance into the Round of 16, Germany was fighting to stave off elimination. Firstly, Die Mannschaft were coming off a 0-1 loss to Mexico, in a match where many people thought the defending world champions would rip apart the CONCACAF table-toppers, having had a near-perfect historical record against them. However, the odds were in El Tri’s favor, and they defeated the Germans thanks to a blistering Hirving Lozano goal on the counter. This defeat against Juan Carlos Osorio’s men meant it was the first time that Germany had lost the opening game of their title defense: in 1958, they defeated Argentina, in 1978, they drew to Poland, and in 1994, they defeated Bolivia.

Meanwhile, Sweden had played its first World Cup match since 2006, and without the influence of star player Zlatan Ibrahimović to boot. They defeated South Korea thanks to a 65th minute penalty from Andreas Granqvist which gave the Blågult the advantage going into in their second game. Thanks to Mexico’s 2-1 victory over South Korea shortly before the Germany-Sweden game, all Janne Andersson’s men needed to do was beat Germany in order to not only qualify for the Round of 16, but to eliminate the reigning champions . Such a result would follow a peculiar trend: this century has seen France (2002), Italy (2010), and Spain (2014) all exit the group stage after winning the prior World Cup.

Joachim Löw came into this match with a few changes from the Mexico game, keeping the standard 4-2-3-1 that he’d become accustomed to. He dropped Mats Hummels for Antonio Rüdiger at center back, Jonas Hector for Marvin Plattenhardt at left-back, Sebastian Rudy for Sami Khedira, and the most eye-catching one, dropping Mesut Özil for Marco Reus, shifting the Dortmund man onto the left side of the midfield and allowing Julian Draxler to play as an attacking midfielder.

Sweden kept the same lineup against their European counterparts, imposing a defensive style of play, and despite not having that same individual quality that Zlatan boasted in the past, they held strong with the same resilience that Andersson has worked so diligently to instill in them. Sweden knew they wanted to seize the opportunity and make history by defeating the powerhouse in Sochi, and that was proven early on during the start of the match.

In the 12th minute, with Germany caught on the counter, Marcus Berg raced towards Manuel Neuer’s goal, only to be taken down by Jérôme Boateng with a polemical challenge in the box, in which referee Szymon Marciniak did not think it would be enough to call a penalty into Sweden’s favor.

20 minutes later, Ola Toivonen bursted into the German box to control a Viktor Claesson right-sided cross on his chest, and then lifted his shot over Neuer into the far corner of the net to give the Swedes the 1-0 lead. At halftime, the Germans were 45 minutes away from heading into the abyss and being sent home, meaning that Löw had to lay it all on the line if they were to snatch a win in Sochi. They soon got that wish; within three minutes into the second half, Germany drew level when Timo Werner’s cross found Reus, who met the ball with his knee and turned it into the bottom corner of Robin Olsen’s net.

Even then, the Germans would not be satisfied with a draw, and attacked as best as they could in order to get the three points, while Sweden were pulling through with great defensive resistance to deny Die Mannschaft the three points that they so desperately needed.

With just under 10 minutes left, Jérôme Boateng was sent off after picking up a second yellow card following a tackle on Berg, making the night go from bad to worst as the unthinkable was approaching. Alas, they were given one last chance of a miracle, and to attempt that miracle, up stepped Toni Kroos.

In the 95th minute of stoppage time, Germany was given a free kick on the left side of the Swedish box. The Real Madrid man then tapped a free-kick short to Reus, before striking the return pass into the top right corner from the left side of the penalty area. It was that deadly marksman-like shot that we don’t usually see from Kroos, but when we do see it, it almost always ends up in a goal. Curving the ball in with his heavenly right foot, Kroos not only scored one of the goals of the tournament, but secured the three points that they needed in a last-minute thriller. It was a heartbreaker for Sweden, who desperately fought for the result they needed, but for now, they would have to wait for their final game against Mexico, as Germany took on South Korea.

In the end, both Sweden and Mexico ended up qualifying for the Round of 16 thanks to the South Korea’s win over Germany, which sent shock waves around the world and sent the Germans packing, as the third consecutive defending world champion failed to advance to the knockout round.