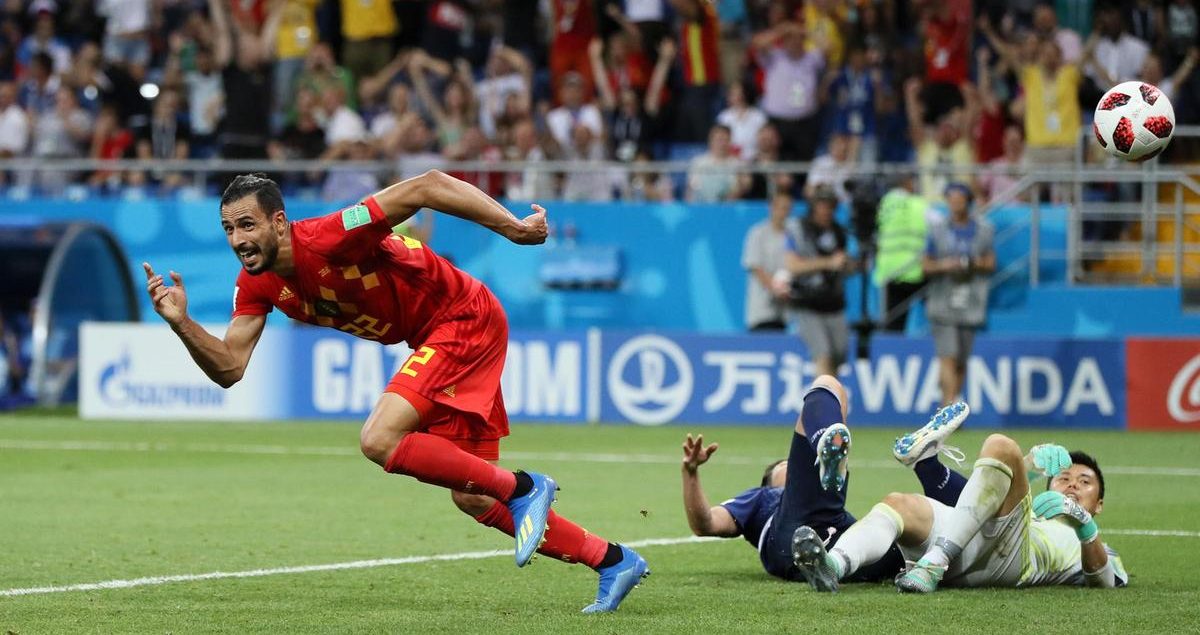 Belgium was the team that pleased the neutrals the most at the 2018 World Cup with its attacking play, thanks largely to its golden generation of footballers coming to the fore.

Prior to the tournament, De Rode Duivels were considered to be dark horses for the trophy, but there was skepticism over the team. Under Marc Wilmots as coach, the Belgians reached the quarter-finals of both the 2014 World Cup and 2016 European Championship, but that record seemed underwhelming considering the talent that the former Schalke midfielder had at his disposal.

The 2018 squad featured an abundance of stars who play their football in the English Premier League, and they shone for their country throughout the tournament. Under Spanish coach Roberto Martinez, this team was given more structure than what it had under his predecessor, and he gave the team a clear attacking identity.

Throughout Russia 2018, Belgium was involved in many exciting matches, and the standout was its Round of 16 encounter with Japan, in which it overturned a two-goal deficit to win 3-2 at the death.

Both teams entered this game with contrasting fortunes. The Belgians topped Group G after winning all three group games, scoring nine goals and conceding just two in the process. The Japanese, on the other hand, finished second in Group H due to a tiebreaker after they had received two less yellow cards than Senegal.

Before this encounter, the two teams had played each other five times, including a 2-2 draw in the group stage of the 2002 World Cup which Japan hosted. De Rode Duivels were aiming to reach the quarter-finals in back-to-back World Cups for the first time in their history, while the Samurai Blue had the chance to make their first ever quarter-finals appearance, period.

The Rostov Arena in Rostov-On-Don was the venue for this Round of 16 clash on the evening of July 2, and although it was Belgium that kicked off the proceedings at 9 pm local time, the Japanese had the first chance of the game in the opening minute when a header out of defence fell to the feet of Shinji Kagawa, who took a shot from outside of the box and the ball just went wide.

Ten minutes had gone when Japan created its next clear attack. Takashi Inui crossed from the left-wing but Belgian defender Vincent Kompany headed the ball clear. Seconds later, Gen Shoji shot from 40 metres but the ball went high and wide. Straight after, the Red Devils went on their first attack and Kevin De Bruyne chipped the ball to Dries Mertens, but the Napoli forward couldn’t run to the ball quickly enough.

Belgium was starting to get into the game more and could have scored twice in the 16th minute. Thomas Meunier flicked a high ball to Eden Hazard, who controlled the ball down with his right foot, turned around, and laid the ball off for Axel Witsel and his shot was deflected for the first corner of the match. De Bruyne took the resulting corner, and after receiving the ball back from Hazard, he crossed to Kompany, whose header was cleared away.

A minute later, Romelu Lukaku had two defenders on him but he managed to turn around and got a shot away but it went wide after it went in between the legs of Makoto Hasebe. Despite the touch from the Japanese captain, Senegalese referee Malang Diedhiou awarded the Samurai Blue a goal kick.

Martinez’s side were putting some excellent passes together and 21 minutes had been played when Lukaku had another chance to score but the shot from his non-preferred right foot was deflected high and out by Japan left-back Yuto Nagatomo.

Four minutes later, a first-time cross from Mertens was deflected into the path of Lukaku, who could not get clear control of the ball. Maya Yoshida tried to clear it but Samarai Blue goalkeeper Eiji Kawashima caught the loose ball before any Belgians could reach it.

In the 27th minute, Hazard and Mertens were involved in creating a chance for De Bruyne, and his shot needed three attempts by the Japanese defence to be cleared properly. Seconds later, a poor clearance fell to the feet of Hazard, and his thunderous shot was parried by Kawashima. Soon after, Yoshida deflected a Mertens cross away for a corner and then De Bruyne’s long cross found Kompany at the far post but his shot flashed across goal.

After the Belgians created a few chances, Japan produced one of its own in the 31st minute. Yoshida had hit a long ball to Kagawa, who paused, and then back-heeled to Nagatomo, who produced a cross for Inui. The resulting header was weak and it was easily caught by Belgium goalkeeper Thibaut Courtois. Five minutes later, Hazard had a shot blocked by Yoshida and then De Bruyne got the loose ball, passing it to Witsel, who shot over the bar.

With five minutes left in the first half, Diedhiou awarded the first and only yellow card of the match to Samarai Blue midfielder Gaku Shibasaki, who had cynically fouled Hazard while dribbling in the middle of the pitch.

Both teams created a scoring opportunity each before half-time. Nagatomo controlled an Inui long-ball on his chest, cut-in, and attempted a cross-shot with his right foot and the deflection of Yuya Osako almost put Japan ahead. Courtois had let the ball slip out of his hand and between his legs but he turned around quickly enough to prevent the ball from rolling over the line. Then Belgium nearly scored too when Mertens played a one-two with Lukaku but his long-range shot was easily saved by Kawashima.

Although the match was scoreless at half-time, it was an entertaining one nonetheless and both teams looked eager to score at any cost. Belgium was perhaps better playing a possession-based game and using the wings but Japan demonstrated that it had the speed and the flair to expose any gaps in the Rode Duivels defence.

The Samarai Blue kicked the second half off and they took a surprise lead three minutes in. Mertens lost the ball on the right-wing and Inui was able to quickly move the ball to Shibasaki in the middle. His defence-splitting pass could not be controlled by Jan Vertonghen and Genki Haraguchi feigned a shot before hitting a daisy-cutter shot which beat Courtois at the far post.

Belgium tried to equalise soon after with Hazard hitting the post but the Belgians found themselves 2-0 down in the 52nd minutes and Mertens was the culprit again. The Napoli winger dribble down the middle but he passes straight to Yoshida, who gives it to Inui. He started dribbling down the left-wing and chipped the ball into the penalty area but Kompany headed the ball to Kagawa. The attacking midfielder dribbled left and passed backwards to Inui, who controlled the ball with his first touch, and unleashed a shot from 25 metres with his second, leaving Courtois with little chance to save it.

For all their attacking play, Les Diables Rouges had suddenly found themselves 2-0 down due to some careless passing in attack and leaky defending but they persisted. Hazard had three defenders on him but he flicked a pass to Yannick Ferreira=Carrasco with the outside of his right football and the shot flew high into the crowd while Lukaku had a header fly to the left of the goal after another Meunier cross.

Japan nearly made it 3-0 after Sakai played a one-two with Kagawa and Courtois had to stick out a leg to stop the low cross but the rebound was put well wide by one of the Japanese attackers.

Martinez made a double substitution in the 65th minute and it turned the game around as the Belgians went from the 3-4-3 formation to the 4-3-3. Marouane Fellaini replaced Mertens while Nacer Chadli replaced Carrasco.

Fellaini was immediately involved in a chance that fell to Meunier but the right-back blasted his long-range shot high over the bar. He was also involved in the build-up for another Lukaku opportunity but Yoshida intercepted the shot.

The Belgians finally got the goal they deserved in the 69th minute and it came from an unlikely source. A corner had not been cleared properly and the high ball was heading towards Vertonghen on the left side of the penalty area. His looping header had seemed innocuous but then the ball flew over Kawashima and into the net at the back post.

Both teams were going on the attack but Belgium managed to draw level after 74 minutes and Japan once again showed that it was vulnerable at set-pieces. De Bruyne found Hazard on the left-wing, who turned a defender inside-out, and crossed for Fellaini at the far post, who headed downwards with the ball bouncing past Kawashima.

Careless passing in defence meant that all the hard work could have been undone in 60 seconds. Toby Alderweireld failed to control a lateral pass from Kompany after Inui pressured him and Kagawa retrieved the ball. He passed to Inui, he then dribbled past Meunier, and his shot was blocked by Alderweireld’s left leg.

Japan coach Akira Nishino made a double substitution of his own in the 81st minute by taking off Shibasaki and Haraguchi for Hotaru Yamaguchi and Keisuke Honda respectively while maintaining the 4-2-3-1 formation.

It seemed to be working as the Samarai Blue started stringing some short passes together and a Kagawa through-ball set up Honda, whose effort was blocked by a last-ditch tackle by Kompany.

On 86 minutes, Kawashima pulled off a spectacular double save. Meunier crossed for Chadli and the Japanese goalkeeper made a stunning diving save, but the Belgian midfielder quickly got back on his feet and crossed for Lukaku, prompting a fingertip save from the 35-year-old. Kawashima was called into action a minute later, saving a powerful effort from Vertonghen from over 25 metres.

The Samurai Blue then had two chances in injury time to get the winner. Witsel nearly scored an own goal after he touched a Nagatomo cross but Courtois parried the ball away and then Honda’s speculative free-kick from 40 metres was also saved by the Belgian goalkeeper.

It was from the resulting Japanese corner that the Belgians scored the winner. Honda sent the ball straight into the arms of Courtois, who threw the ball to De Bruyne, and then dribbled from outside his penalty area to the centre circle. The Manchester City midfielder then passed to Meunier on the right and he immediately centered the ball for Chadli, who made a late run into the box and side-footed the ball into the net with his left foot.

Barely two seconds had been played after kick-off when Diedhiou suddenly blew the final whistle of what was an enthralling encounter. De Rode Duivels suffered their first great scare of the tournament and survived it while the Samurai Blue came close to eliminating the much-fancied Belgians.

Japan was eliminated at the Round of 16 for the third time in its history but it did score its first two goals at the knockout stages of the tournament. Belgium went on to reach the semi-finals for the second time in its history and ended up finishing third after beating England 2-0 in the third place play-off.