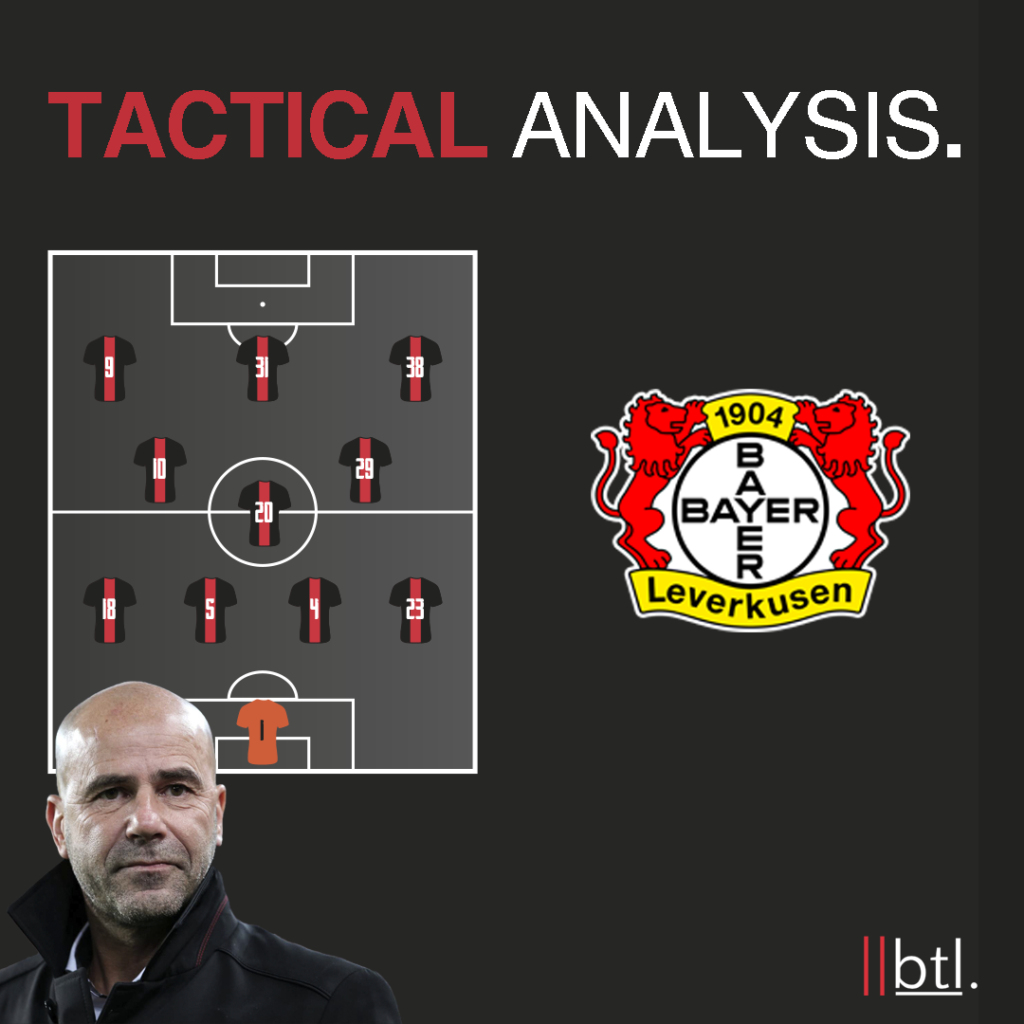 There are intriguing parallels which can be drawn between Bayer Leverkusen and Manchester United’s breathtaking renaissance post the turn of the year. Handcuffed by their managers’ mundane approaches, hackneyed responses to pointed concerns and an overwhelmingly apparent underutilization of electrifying attacking talent at their disposal – here we had two clubs who found themselves in an almost analogous peril.

Whilst Ole Gunnar Solskjaer clicked the reset button and tried to foster an environment at the club reminiscent to what he experienced as a player under Sir Alex Ferguson in addition to some effective tactical tweaks, Peter Bosz walked into a Leverkusen dressing room which was ostensibly stacked with boatloads of talented individuals. There existed though, an indubitable retrenchment of proper guidance, confidence, and a visible exigency when it came to the duties they were assigned to carry out on the pitch.

Bosz realized the paramountcy of instilling consistency and pull Leverkusen out of a period of perplexity. High-possession, ultra-aggressive pressing and deploying a brutal counter-press were soon recognized as key elements of Bosz’s masterplan to resurrect this flailing squad.

Bosz’s shrewd changes do the trick

Subtle and succinct changes are a thing of beauty if they’re applied to perfection. A fastidious cognition offset with the right dosage of audacity are the cornerstones of making ingenious tweaks which don’t significantly impact the balance of the side, and yet resuscitate the existing skeleton considerably. It’s a quandary which needs to be treaded upon really carefully.

Whilst Heiko Herrlich’s sterile style and insouciance towards adopting an attacking approach hemmed Leverkusen’s industrious attackers in, Bosz’s arrival came with a wave of emancipation for flair players like Leon Bailey, Kevin Volland, Julian Brandt, and Kai Havertz. One of the greatest fallacies of having assiduous and endowed young individuals at your disposal is the possibility of sacrificing their impact, and in some cases, hampering their progress, in the search of a more unflinching and dogged game plan for the team as a collective.

It’s an insidious stratagem which Herrlich got sucked into and eventually succumbed to as well. Bosz, thanks to his brilliant work at Ajax, has always been known for exalting youthful pearls from his squad and entrusting them with a respectable level of responsibility. His unwavering faith in the players he trusts, coupled with the laconic instructions they’re given to follow, empowers them to confidently carry out their incumbencies on the pitch without compromising the finesse and proclivity which comes naturally to them.

Bosz made the most of his preceding knowledge about two of Leverkusen’s brightest stars and effectuated a game-changing tweak which is set to hugely benefit the German national team for years.

Brandt given a new lease of life

At 23, Julian Brandt is approaching the stage where players start coming into their own and plot the path which leads them to their peak. On the contrary, Brandt’s dexterity was put on the backburner and there were several occasions when conversations with Herrlich regarding tactical instructions on the sidelines left him baffled and in search of greater clarity.

Bosz always thought highly of Brandt and believed that a player of his quality could prove to be devastatingly good if he’s the heartbeat of every attacking move. As a result, Brandt was deployed as a #8 and it’s safe to say that this subtle switch has more than reinvigorated his career.

The substrative characteristic which should be synonymous with a player of Brandt’s quality is a certain degree of precipitousness which instills a sense of incredulity in defenders. Yet, it was this very unpredictability which was sucked out of his game, making every move of his very easy to pre-empt for full-backs. Brandt usually found himself isolated on the wings and due to the lack of fluidity Herrlich’s system had, he mostly had two passing options in one-on-one situations. An overt sense of predictability set in due to his lack of options as winger.

Now deployed as an #8, his omnipresence on the ball and use of space in midfield has liberated him. With more passing options and delightful combination play, Brandt ensures quick passage of the ball through the lines and increases the transition speed of Leverkusen from their own third to the final third, serving up delightfully weighted through balls for their rapid wingers who are powerful ball carriers and glide past opponents with consummate ease due to their electrifying pace.

A livewire who is extremely difficult to defend against, Brandt has his head on the swivel and his incredible agility to turn immediately after receiving the ball and screen the pitch for passing options to play his way through low blocks and exploit even the slightest of spaces make him a ball magnet – his teammates keep looking for him in order to bust forward.

The rise and rise of Kai Havertz

Brandt’s resurgence has proven to be much more impactful as it’s come in tandem with Havertz being accredited a deeper role than what he’s usually used to operating in. One of the only players to have added a bit more stardust to his already burgeoning potential under Herrlich, Havertz’s ambidexterity aids him phenomenally well.

An attacking midfielder by trade but capable of playing all across the midfield, the teenager is blessed with blistering pace, an ability to exploit halfspaces and occupy areas vacated on the flank due to the wingers dragging their markers outward. The Leverkusen spark plug is the second fastest player in the Bundesliga with a top speed of 35,02 km/h. Naturally, contrary to Brandt’s horizontal movement, Havertz operates more vertically, creating overloads in key areas of the pitch, arriving late in the box and consequently posing an aerial threat at 6’2.

Intentful passing is an integral aspect of Havertz’s game and he rarely wastes a pass. The 19-year-old is often seen dropping deep to play in between the oppositions lines and pulls off quick, low and vertical passes to Volland in the centre or to Bailey and Bellarabi scorching the touchline. Sharp as a tack whilst deciding upon his next move and angling his body for an incision-laden pass, Havertz’s vision, and technique make him ridiculously difficult to defend against.

A perfect mixture of diligence and elegance helps the teenager run into spaces vacated by Leverkusen’s quick attackers centrally, or drift wide to occupy the areas freed up due to the wingers moving inwards, and then deliver inviting crosses into the box. Far from a young enigma who’s rounded edges might perhaps require some sharpening, Havertz’s industry and full-blooded brilliance make him a contender to be Germany and world football’s next greatest phenomenon.

A fascinating and perhaps fearsome concoction of technique, awareness and ability act as an umbilical link, making Havertz the logical heir to both Michael Ballack and Toni Kroos – given that he so effortlessly coalesces both of their qualities for Leverkusen, and perhaps most certainly will for Germany in the not-so-distant future as well.

What this means for Löw and Germany

Joachim Löw refined the revolution instigated by his predecessor Jürgen Klinsmann back in 2006 and is now once again tasked with sparking off a new cycle for the national side. Germany’s catastrophic failure at the World Cup in Russia was the nadir of Low’s time at the helm of the national team and gave him enough reason to set the wheels of change in motion, thereby instigating another revolution.

With veterans like Mesut Özil, Jérôme Boateng, Mats Hummels, and Thomas Müller being flushed out of the national team fold, it’s time for youth to take centre stage and provide a newfangled wave of sprightliness and ebullience to a somewhat passive and insipid German camp. Brandt and Havertz’ renaissance coupled with Leon Goretzka’s dominant performances for Bayern Munich has provided Löw the perfect opportunity to usher in a new generation of players with whom he can chart a way back to the zenith of the football universe once again.

Löw has always stressed on the importance of fostering a culture in the youth coaching setup which gives antecedence to cognitive coaching. He believes that the ability to think ahead and proactively is the underpinning which filters the elite crop of players from the good ones, and in Brandt and Havertz, he has two players at his disposal around whom he can build the future of the German national team.